I just saw the Pixar movie “Wall*E” the other evening and I will state for the record that it was amazing. In the film, our near future world has becomes unlivable due to mass consumption and no place to put our mountains of garbage. The hero of the film (Wall*E) is programmed to help clean up Earth and has labored for hundreds of years compacting trash and stacking into giant towers. It was a very sad look into our possible future but a possibility never the less. Rubber tire disposal is a real problem for landfills all over the world. These mountains of tires are not only massive but also very dangerous. Fires that break out on these dumps are almost impossible to put out and have been raging for decades, releasing dangerous toxins into the atmosphere. This “Re-Tyre” concept by Carl Menary is a step in the right direction to help find new ways to repurpose these disposed tires. Carl has ingeniously remolded tires into seating that is perfect for outdoor areas like parks, patios and other public spaces. 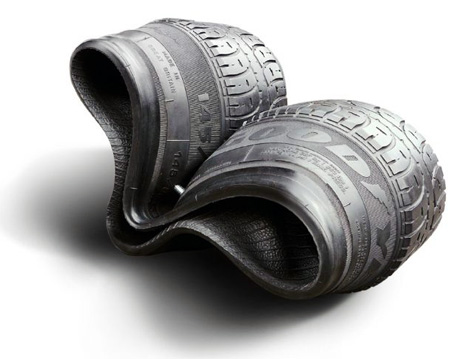 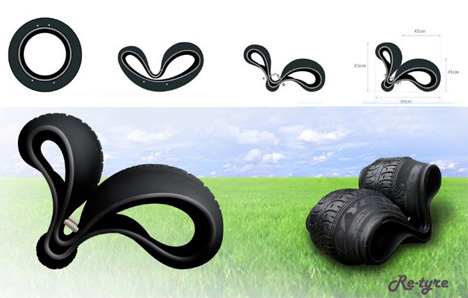 There’s just something about a multifunctional piece of furniture that ticks all the checkboxes for me! Imagine a product that’s been designed to work as a clothing…

The Patatras is a new way to store books – a wheel of knowledge if you will. Made of expanded polypropylene in a range of…

As you might have guessed from the name, the heart of this design is a single thread that keeps it all together. This otherwise insignificant…

One to Five is an installation comprised of ten previously unreleased chair designs by Viennese designer Thomas Feichtner. All of these are presented as printouts…