With just two months to go until New York’s ICFF, influential designer Tobias Wong’s plans for a guerilla store are finally being realised. Over the coming weeks, as preparations gather momentum, Tobias, who has just been named one of Forbes’ 100 top Tastemakers, and Gregory Krum, director of the Cooper Hewitt National Design Museum Shop, will keep us posted on the highs and lows of their exciting enterprise…

‘Finally, 3 years after the ill-fated Terminal 5 exhibition at JFK Airport where I installed 9/12, a gift shop of art and design in Saarinen’s original TWA Terminal (the show which never did open), I felt it was time, and after much grieving, to attempt another pop-up guerilla related shop. This time it will be on a much smaller scale located on the ground floor of a former gallery space in Chelsea, the heart of New York’s art scene.

This store will be like no others. To ensure that, I have teamed up with Gregory Krum, director of Retail for the Cooper-Hewitt National Design Museum, to select a collection of artist multiples and designerproducts. The store will feature rare, limited, commissioned, exclusive and one off works by artists and designers such as Sol Lewitt, Kaws, Jenny Holzer, Joseph Beuys, Yves Behar, Martin Margiela, Sol Lewitt, Marc Newson, Donald Judd, Hella Jongerius, Bouroullec Brothers, and many others (more to confirm over the next few weeks). We are also extremely excited to have the North American exclusive and debut of Herzog & De Meuron Rotterdam’s limited edition of 1000 perfume. Talks are on the way with Apple about an early release of the iphone for the store.

Even though the store will open temporarily for 2 months, we are treating it as if it were a permanent business. We have hired high profile creative agency, Work in Progress, to help with branding and have brought in conceptual consultant Cyril Duval of item idem (who, too, has had experience with opening guerilla shops of his own and others like Collette meets Comme des Garcons and Bernhard Willhelm ‘store in store’ shop in Tokyo). Josee Lepage, creative director of Commissaires in Montral, will be store director. Martin Margiela will design the staffs uniform.

The store will open during ICFF, New York’s design fair in May.’ 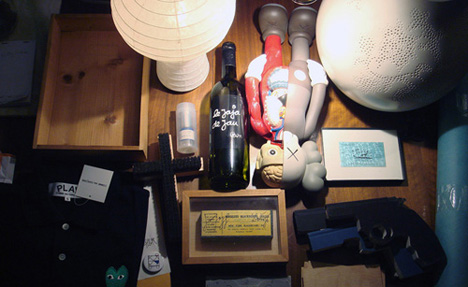 This gas-powered toaster, oven and stove will be your favorite companion in the kitchen and outdoor!

A combination of a toaster, oven and stove is in itself a multifunctional appliance you cannot do without in the kitchen. The downside of any…

The dishwasher-friendly filter of this air purifer is good for you and the planet!

We have watched a ton of movies with a world-ending apocalypse threatening doomsday, but till the moment actually arrived in the form of COVID-19, we…

This tripod-inspired adjustable desk goes from sitting to standing while working from home!

Nowadays, many of us are working from home and that means our workspaces are probably also benefitting from some home makeover projects. Being able to…

No. It isn’t the bellow pump from Tom and Jerry that bloats the cartoons up! The Jikka Bread Basket bases itself on the same principle…