A good, reputed double tourbillon watch costs as much as a Lamborghini. It’s a stunning technology, no doubt, and requires painstaking hand-assembly, but I’d be mad to talk about a timepiece that clocks in at north of half of a million dollars. However, the ZEROO DT1 is a bit of an outlier in that regard. Yes, it sports a stunning, hand-assembled double-tourbillon complication sitting within a three-layer octagonal-shaped case, capped with a sapphire crystal cover… but it does so without costing a fortune. In fact, the ZEROO DT1 is literally more than 99% cheaper than your high-end two-tourbillon watch, costing just over $3,000.

While the price pays a major role in what makes the ZEROO DT1 so fascinating, it’s the two-tourbillon complication that absolutely steals the show. Visible at the 5 and 7 o’clock positions on the watch face, the tourbillons rotate once per minute, achieving greater precision through their synchronization, while hat-tipping to a category of watches that were previously only reserved for billionaires. Given its average price, double-tourbillon watches are considered a luxury lifestyle accessory, but the designers at Japan-based ZEROOTIME are committed to bringing the technology to regular consumers through the crowdfunding business model. This results in ZEROOTIME being able to avoid all overheads and middlemen, allowing the $3,000 DT1 to be ‘honestly priced’.

Each tourbillon is painstakingly hand-assembled before being individually and manually inspected for any defects. The complication is then encased within an octagonal case crafted from 316L steel, before being capped with a sapphire crystal on the front, and a metal plate on the back, finished with the Côtes de Genève microtexture. The watch face features highly legible numbers, coated in LumiNova for readability in low-light conditions too, and a crown at the 3 o’clock position lets you set the time as well as hand-wind the watch – a process that lets you intimately experience and control the watch’s double beating heart. Each DT1 also comes with a hand-stitched black polished leather strap to match the finesse of the watch’s magnificent movement, and a 2-year warranty on the timepiece. 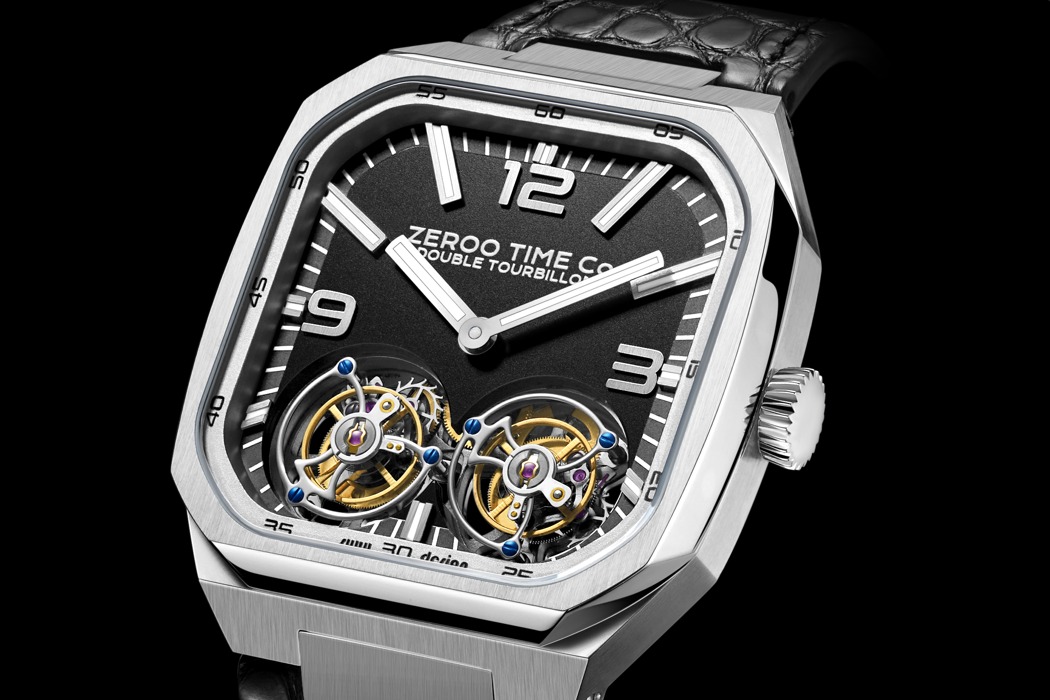 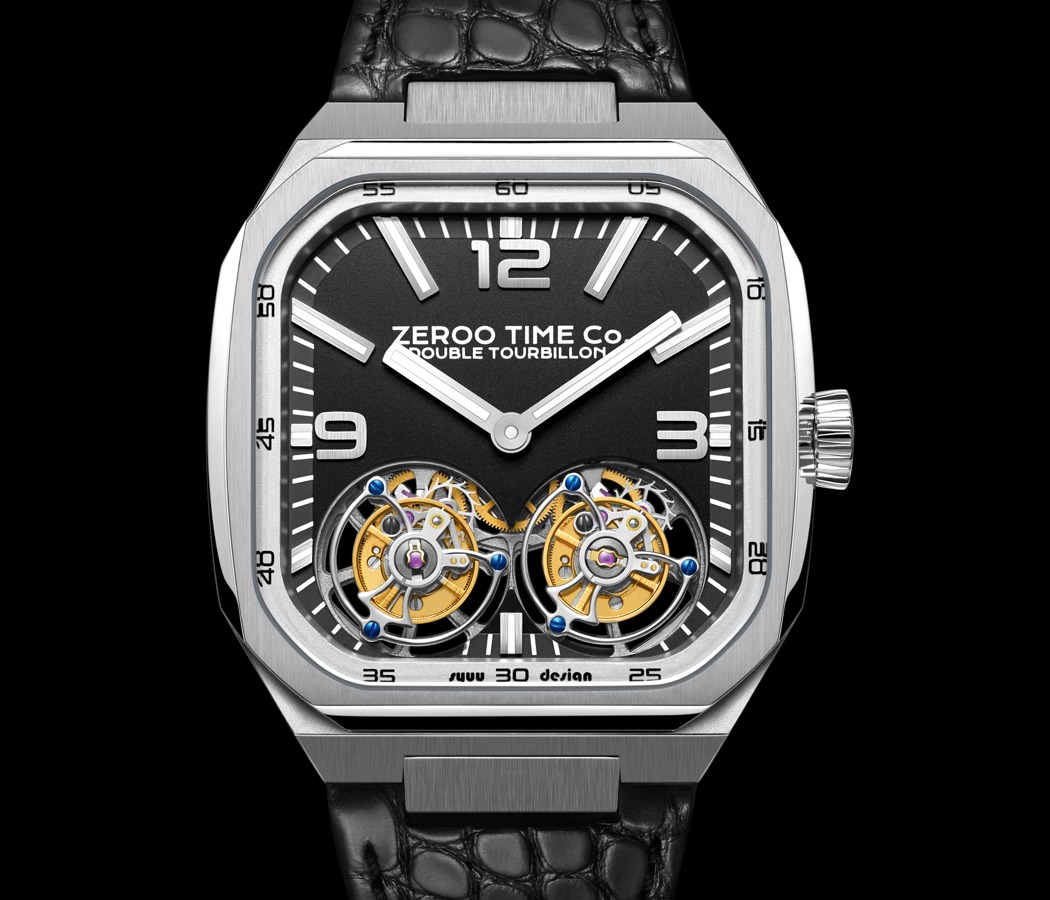 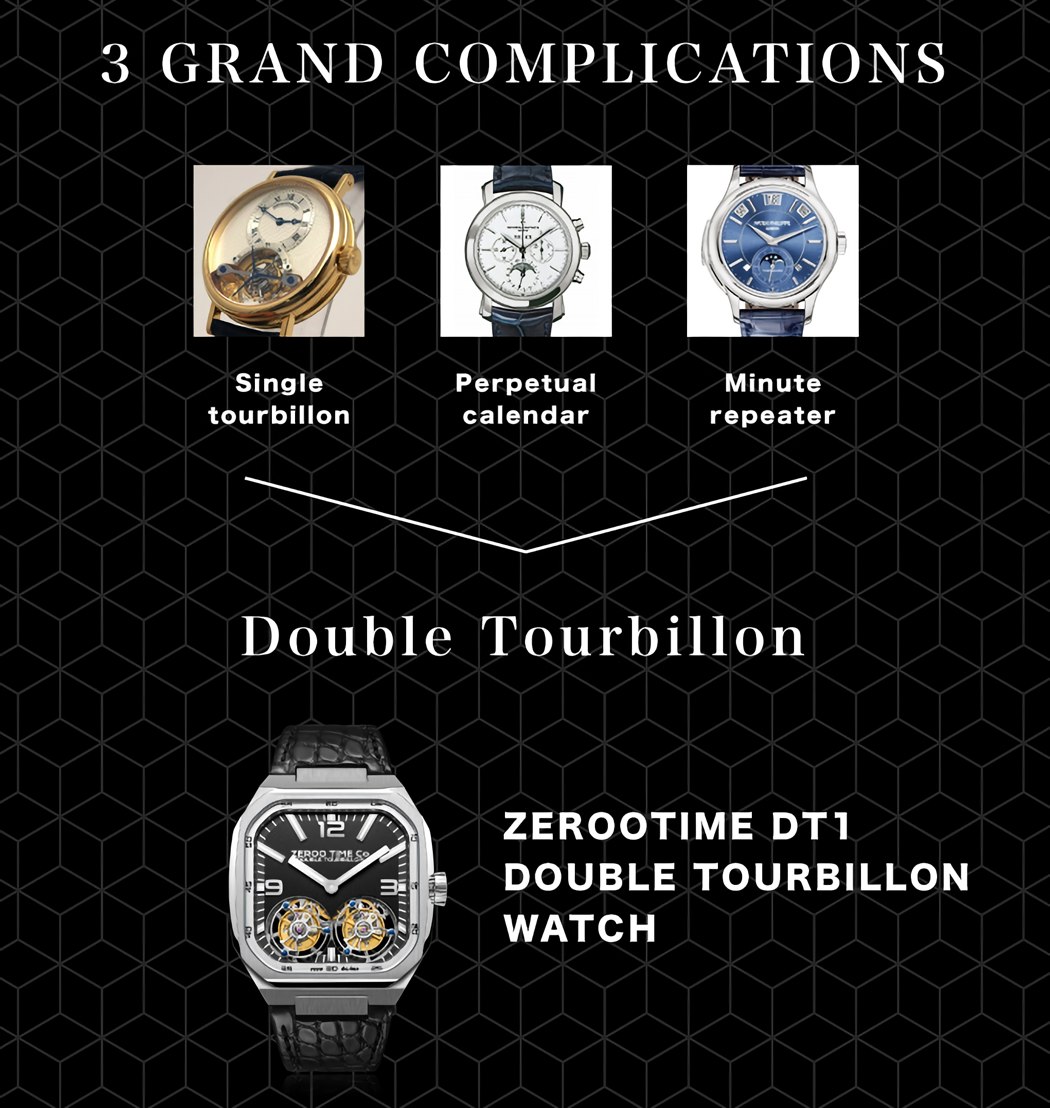 The world’s three grand mechanical watch complications are the tourbillon, the minute repeater, and the perpetual calendar, and wristwatches containing any one of these are sold by luxury watch brands for hundreds of thousands of dollars. The double tourbillon, however, stands above these as a super-complication and produced in extremely limited quantities each year by only the most skilled watchmakers, and thus are available only to billionaires.

The ZEROO DT1’s two tourbillons rotate once per minute, achieving greater precision through their synchronization.

Prioritizing a modern look when worn on the wrist, the ZEROO DT1 is not round but an oblong octagon. The caseback, secured with see-through sapphire crystal screws, features a Côtes de Genève finish. And whether worn with a leather, metal, or silicon strap, the convex lugs maintain a uniform curve from case to strap. 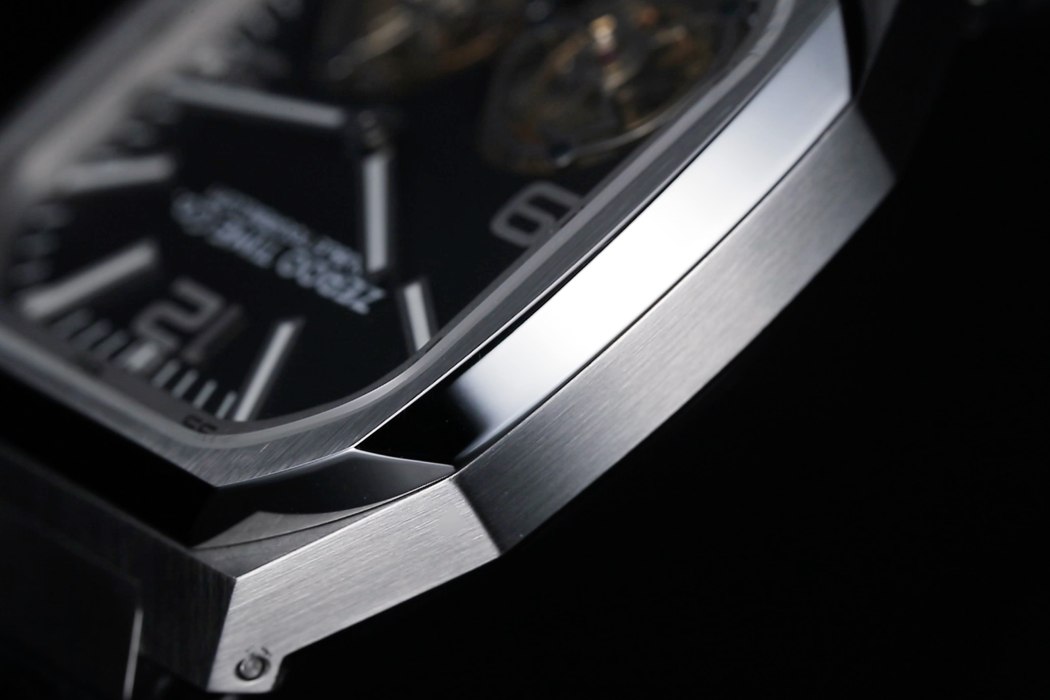 With two carriages, the movement is large and could easily feel too big on the wrist, but the case’s size and octagonal shape avoids this. 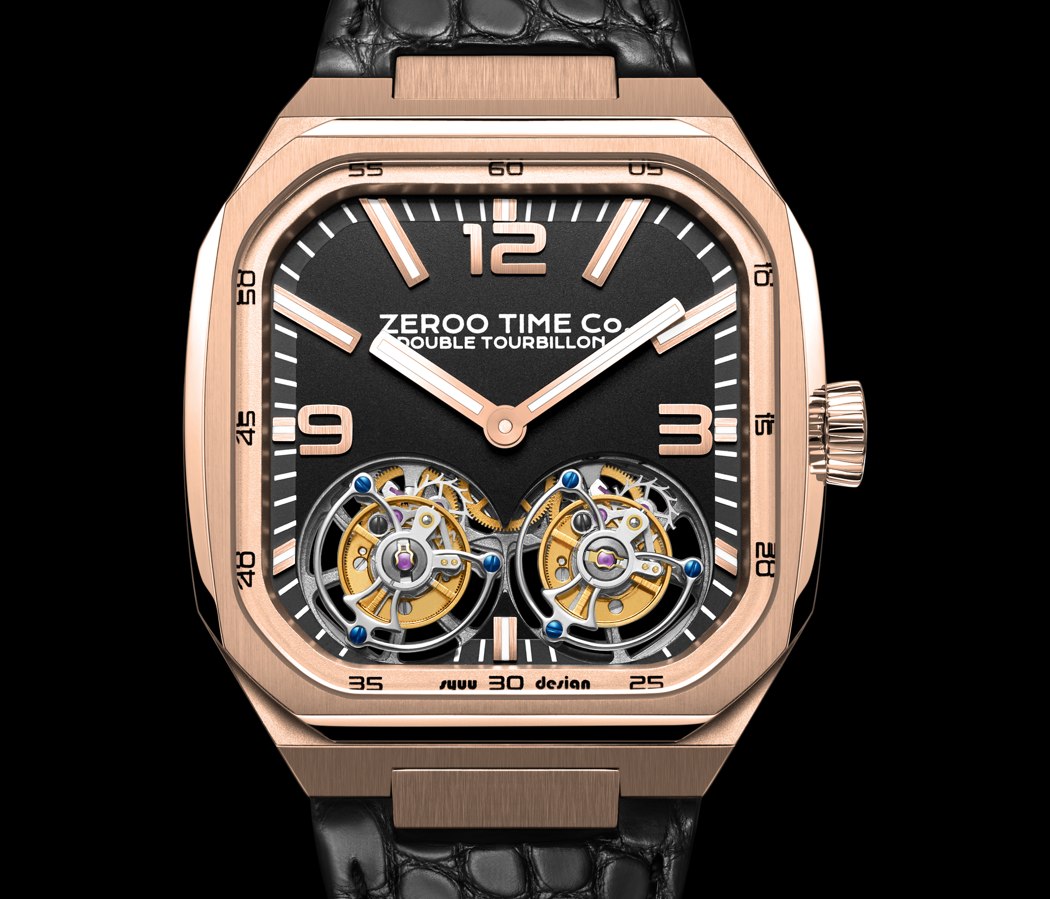 The 12, 3, and 9 are original font molds and the crown is intricate, an original trapezoidal design for the DT1 that is as beautiful as it is easy to operate.

The ZEROO DT1 has a hand-wound movement so you can feel the heart of the watch as you wind its spring, as if fueling a vehicle. The inclusion of a tough mainspring can power the watch for a reserve of up to 42 hours.

The hands are solid like a luxury brand sports watch, but to let the wearer both enjoy the movement and easily tell the time, the team spent days studying hand thickness and luminous surface area, adjusting by tenths of a millimeter until they arrived at the optimal ratio.

LumiNova® makes the hands and index luminous, allowing you to instantly know the time even in the dark. 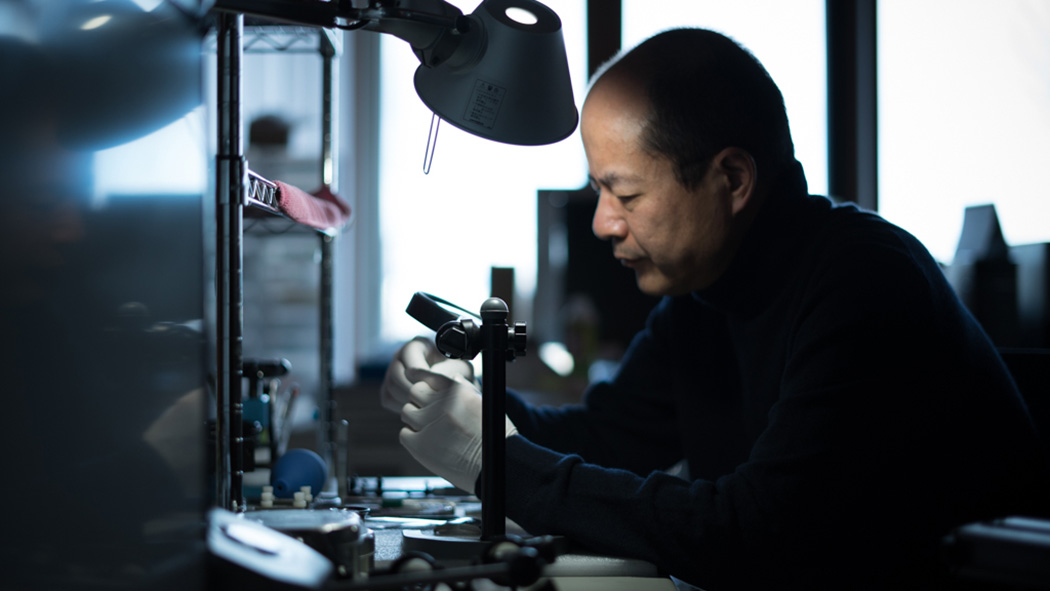 Inspired by Nat Geo Wild, the Onyx drone aims to provide nature lovers with an entirely new way to track and record landscape and wildlife…

https://www.kickstarter.com/projects/kettlecross/kettlecross-the-kettlebell-hybrid? While the idea of weight-lifting has been around for as long as humans have, the kettlebell as we know it probably originated in the…

This personal workstation retracts and unfolds with ease while working from outside!

﻿ Working from home sometimes really means working from anywhere we want. Some of us prefer a quiet coffee shop with WiFi, maybe a library…

We have all done it. You might be doing it right now. If you are reading this site, then you are probably predisposed to doing…