On 25 January Asymptote Architecture, a New York based architecture practice led by principals Hani Rashid and Lise Anne Couture, has been awarded the Millennium Tower World Business Center (WBCB) in Busan, Korea through an international competition organized by the Busan International Architectural Culture Festival (BIACF) and sponsored by the Municipality of Busan City and the Solomon Group. The announcement was made on January 23 in Busan after a unanimous decision by jury members selecting Asymptote’s ground breaking design of three separate tapered towers rising out of a robust and powerful base. The Solomon Group, a private Korean developer, intends to move forward with Asymptote’s design for a 560m tall tower, which upon completion will be the tallest building in Asia. Asymptote’s three-towered design for the World Business Center Busan is a newly minted approach where the notion of singularity and autonomy gives way to a strong juxtaposition of form and voids. Simultaneously a single entity, the towers are also read as three distinct forms set against Busan’s dramatic natural backdrop of sea and mountains. The base of the tower artfully negotiates the site at the entrance level while from the top of the midsection the three slender towers rise above the skylobby level and gracefully taper upwards around a spectacular central void. Through its formal and sculptural qualities this unique architectural expression is a powerful symbol of 21st century Busan and a beacon for it’s trajectory into the future and onto the global stage. 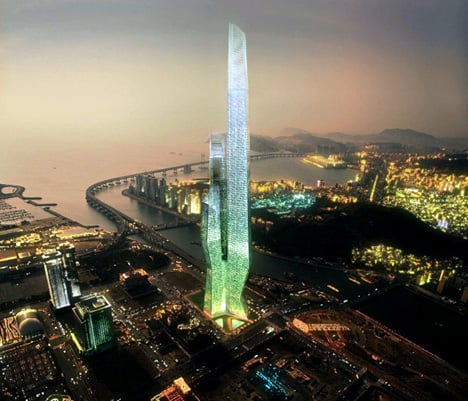 The Badehus, or Bathhouse, is a modern, minimalist reinterpretation of the traditional Norwegian boathouse with 45-degree angled timber planks that give it a dynamic, semi-enclosed…

Situation on the west coast of the Baltic island of Öland, Villa Widlund stands out as a solid white, geometric, concrete landmark in perfect contrast…

An Architectural Answer to Road Ecology

However necessary they are for modern transportation, highways have a huge negative impact on the ecosystems and wildlife in areas where they’re built. Designed for…