Reid Architecture’s Spanish arm, Reid Fenwick Asociados, is behind the design for Valencia FC’s new home. The 75,000-seat stadium should be ready for the 2009-2010 football season, and could even be a future venue for a Champions League final. It stands on one of the main routes into the city, and should prove a useful means of orientation. Its external skin comprises large, perforated aluminium segments, which act as a scale plan of Valencia, depicting each neighbourhood. But this is not just about aesthetics – the skin also doubles as a ventilation system. 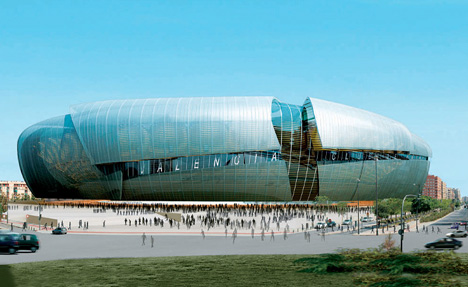 I don’t usually like to question anyone’s artistic expressions on any level, but I think flying into Wellington International Airport in New Zealand is about…

Architectural design renders that give us a glimpse into the future of humanity: Part 2

As a fan of fictional writing, nothing excites me so much as to see a whole new world, unexplored and full of opportunities. That is…

Let’s say you’re lost in the wilderness, exhausted from a mountain excursion, about to freeze your a$$ off in the snow. What would be better…