Personal mobility devices have become more popular and sought-after over the past few years. Whether it’s to escape traffic congestion or as a means to reduce the reliance on fuel-chugging cars, vehicles like electric scooters and electric bikes have become en vogue among certain classes of people and commuters. But just like foot-powered bicycles, the applications of such personal transporters are limited to the terrain, their motors, and most especially, their batteries. Given how these devices balance you on two wheels while standing, it’s probably for the best that they aren’t able to go all out in speed and range. Of course, that doesn’t mean it’s not possible to push the envelope, and that’s exactly the kind of upgraded experience that D-Fly’s hyperscooters are offering both in terms of performance and aesthetics. 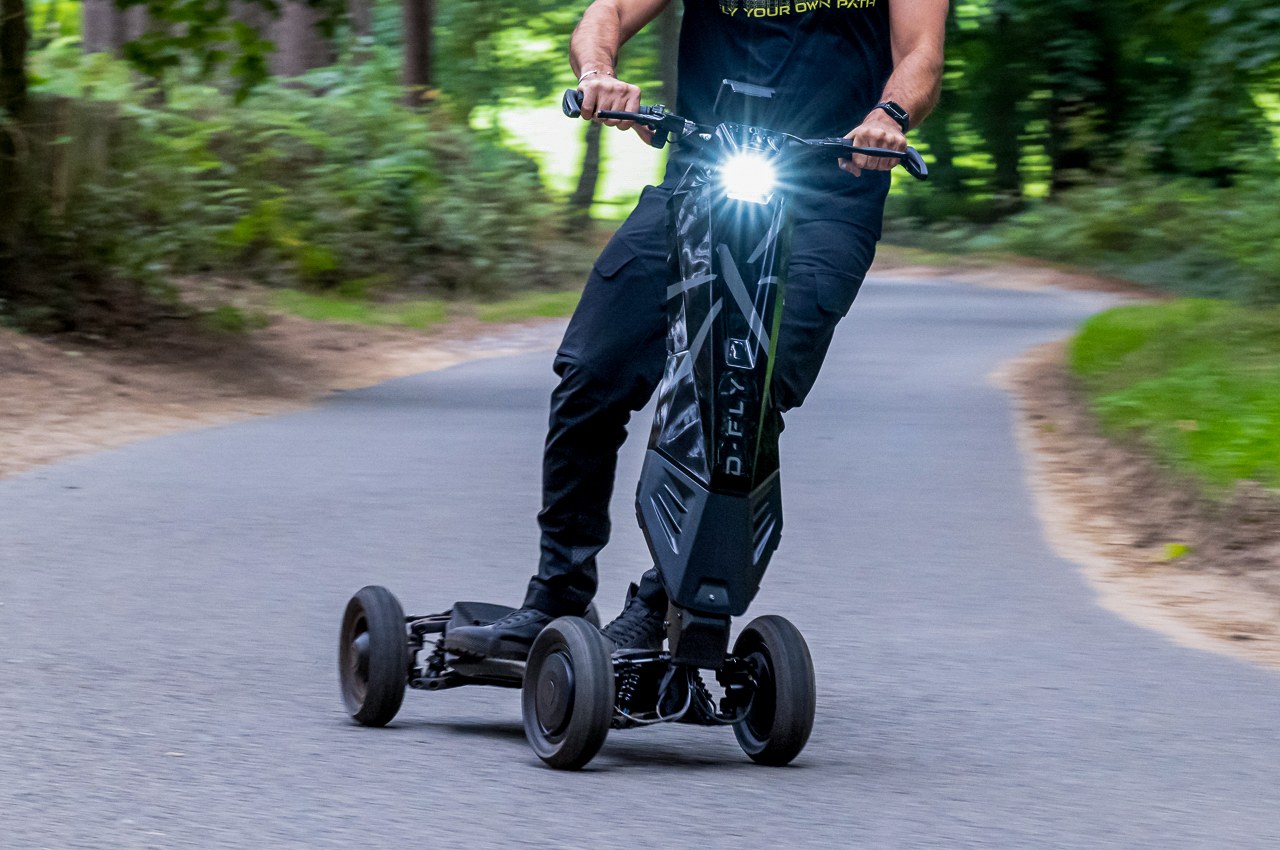 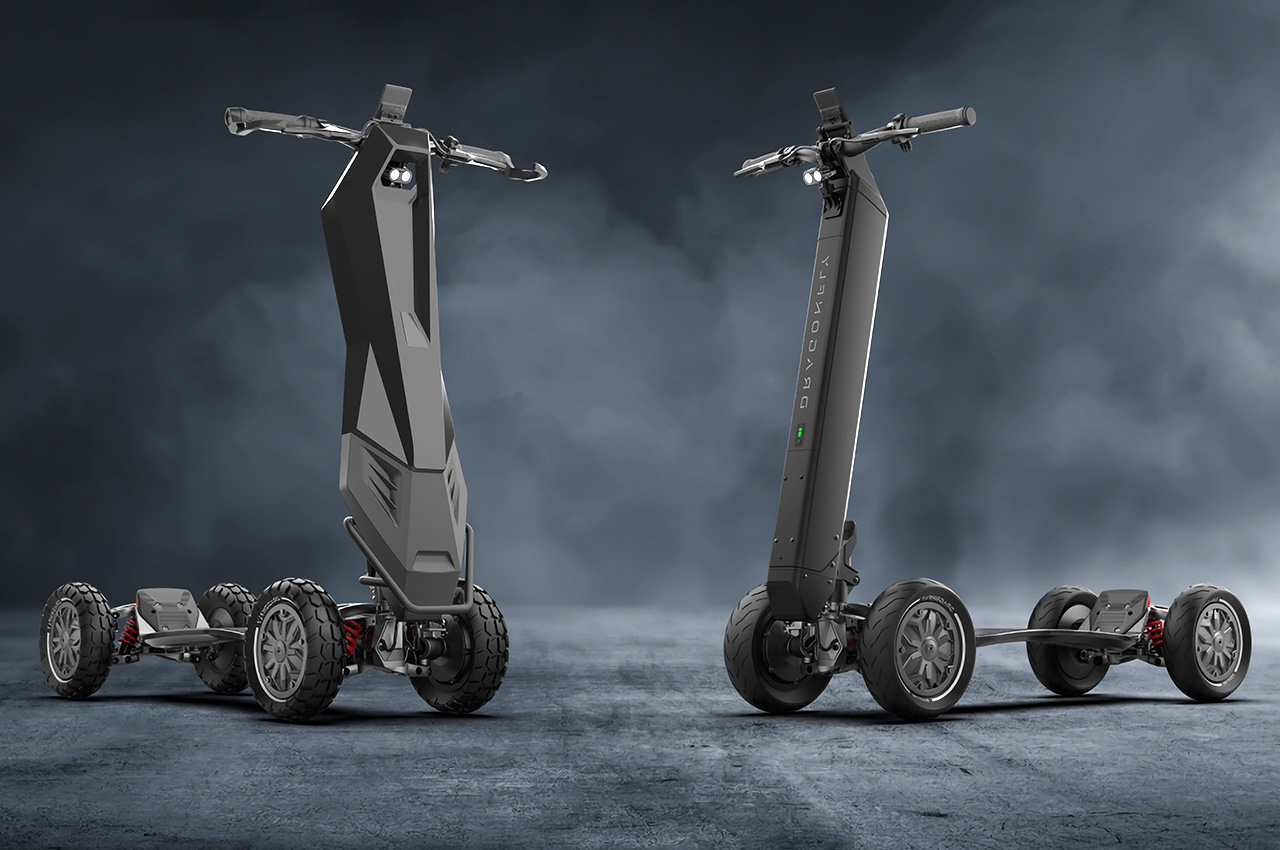 As the name suggests, hyperscooters are to e-scooters what hypercars are to regular cars. The name screams performance, at least within their particular category of transportation. One look at these Dragonfly electric scooters will be enough to send the message that this isn’t your run-of-the-mill battery-powered transporter. It is one that’s clearly made to go beyond the limits of e-scooters, with a futuristic motif to match is forward-looking capabilities.

Patented 3-Dimensional Full-Tilt Steering System – Intuitive way to steer by engaging all 4 wheels at once.

The first thing you’ll notice about the Dragonfly is that it has four wheels instead of just two. Like a cross between a scooter and a car, these four wheels, each with 10-inch pneumatic tires, offer better stability and reliability, especially when running on difficult terrain. D-Fly’s patented three-dimensional Full-Tilt Steering System makes controlling those four wheels easy and intuitive. In addition to the typical turning of the handlebar, this novel technology syncs the hyperscooter with the rider’s movements, allowing simple tilts to control the ride with more precision.

With two more wheels than normal, you’d expect the Dragonfly to offer more power, and it definitely doesn’t disappoint. Powered by two 550W motors, these powerful e-scooters boast top speeds of 25 mph (40 km/h) and a range of 49.7 miles (80 km) on a full charge.

Despite that speed, the hyperscooters are still designed with safety and comfort in mind, thanks to a dual wishbone suspension and adjustable hydraulic damped spring suspensions for each wheel. Whether you’re zipping through highway traffic or riding through a challenging adventure, the Dragonfly Hydroscooter will get you from A to B quickly and safely.

4-wheel Dual-braking Mechanism – Go from 25 mph to a full stop in under 6 feet. 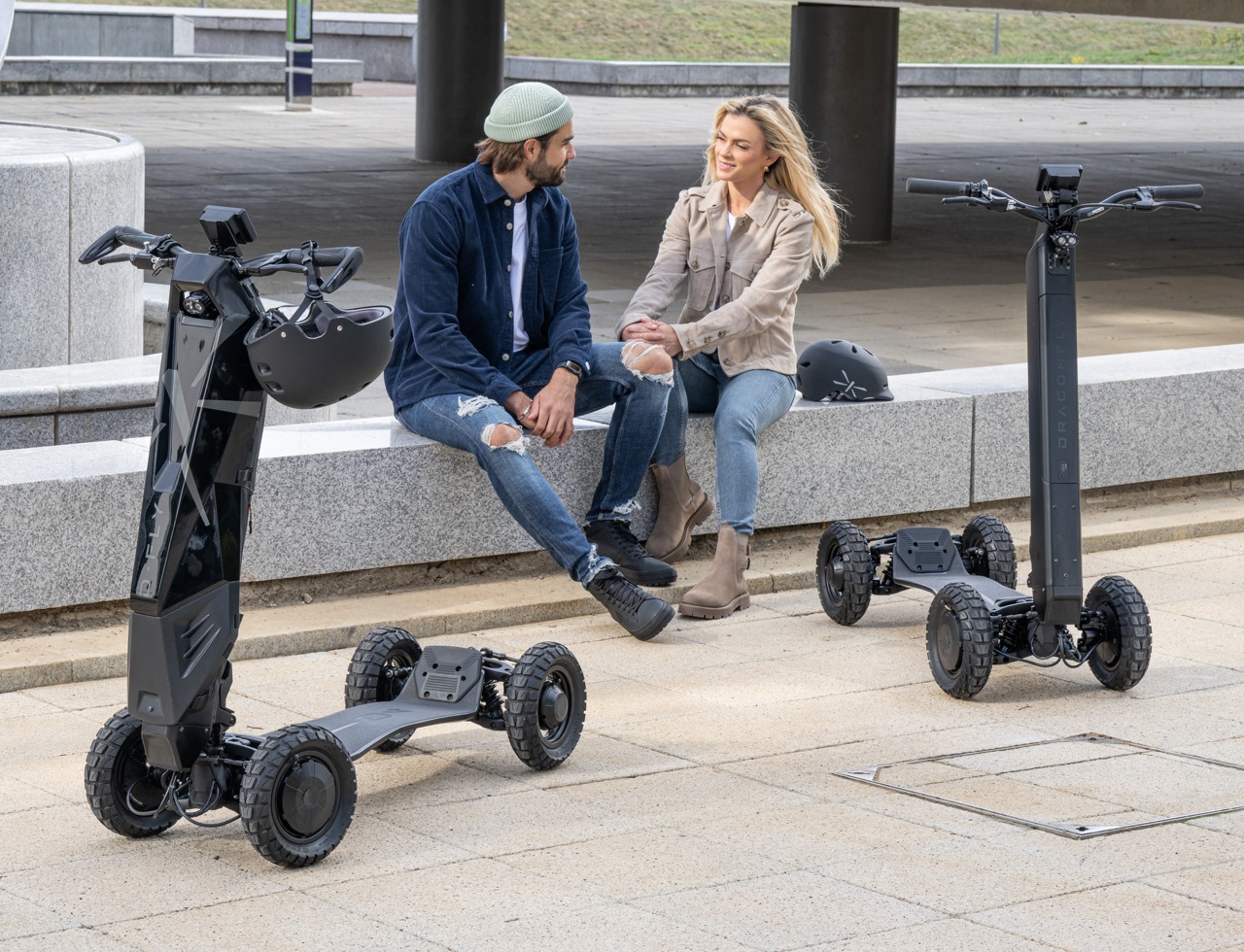 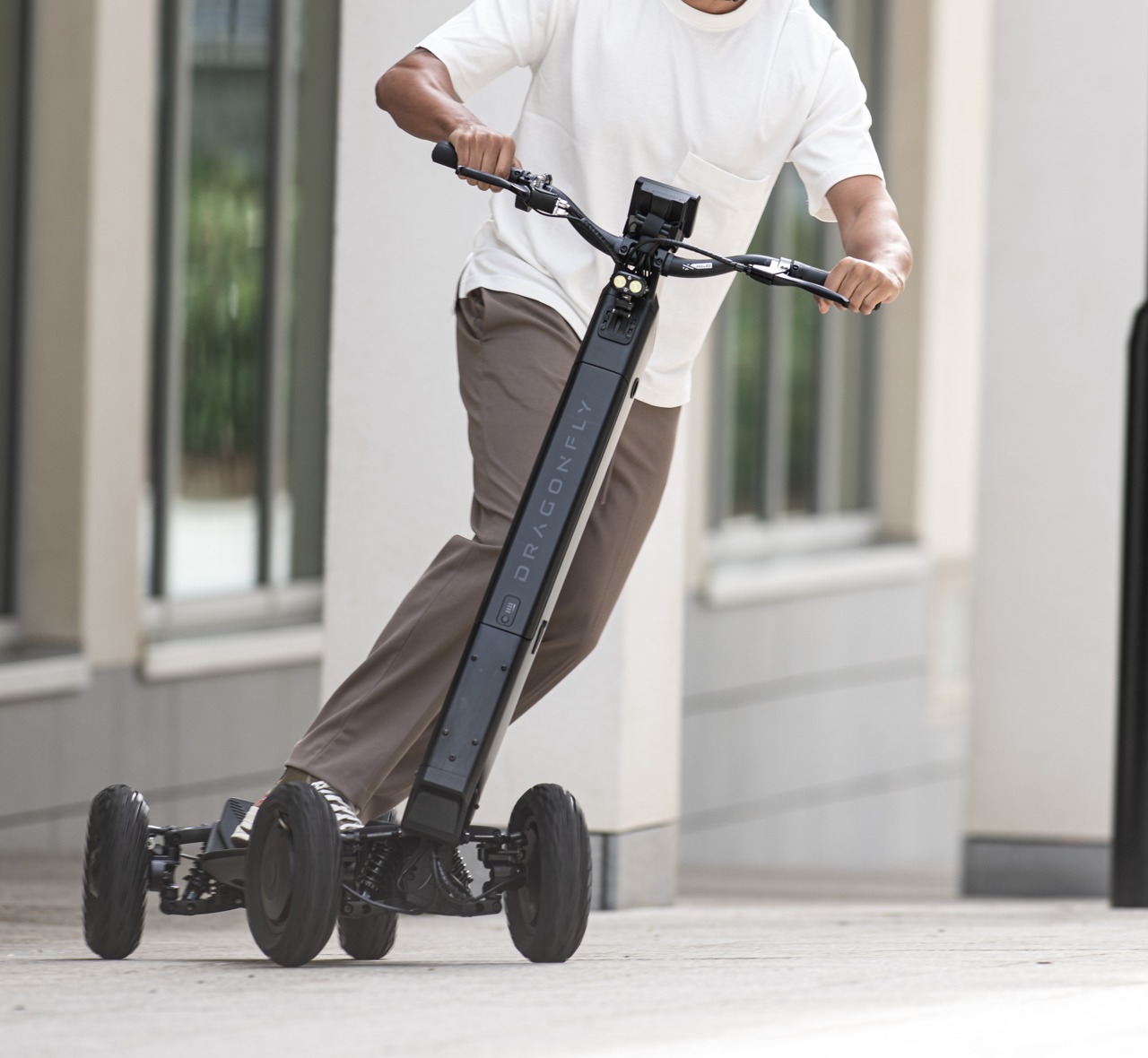 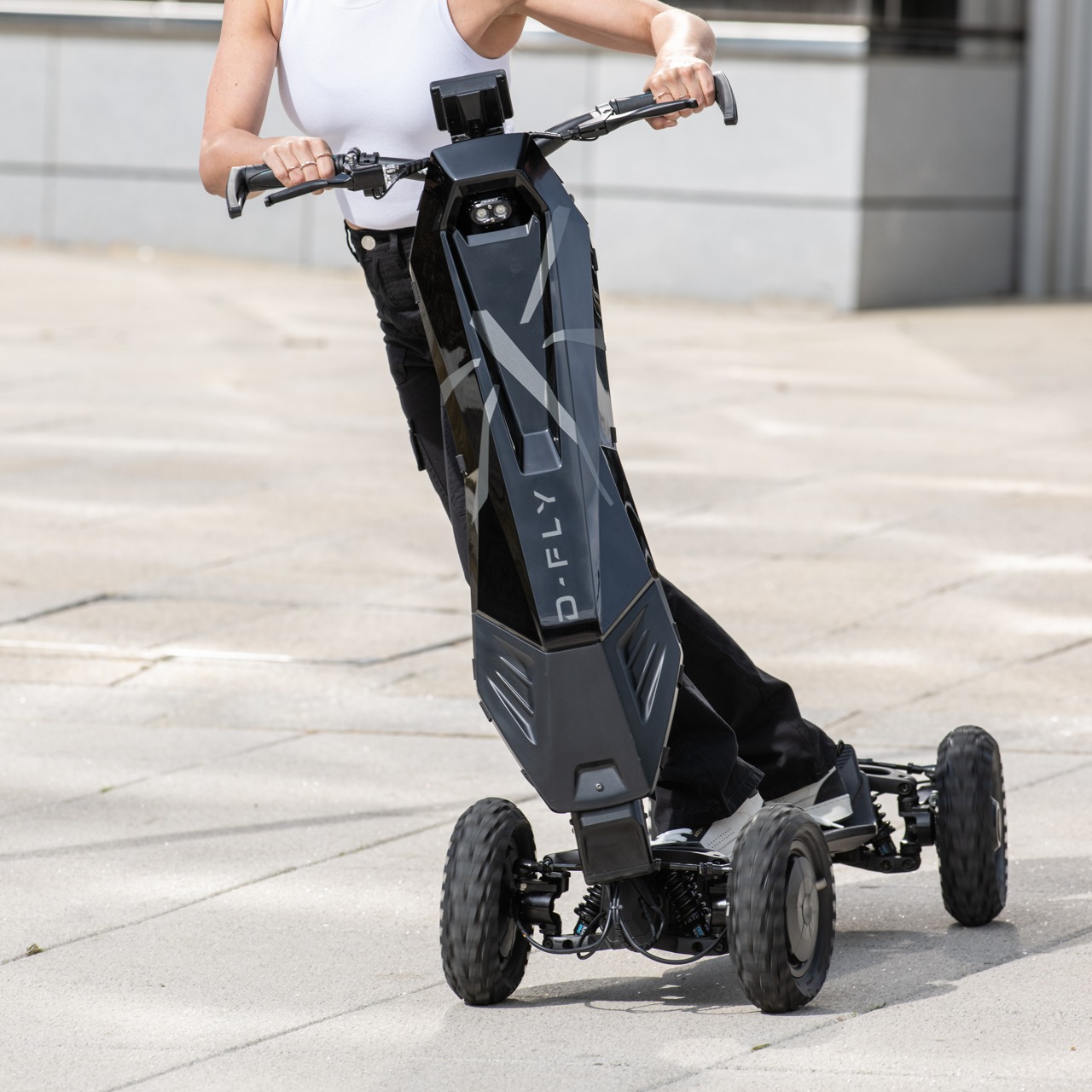 The Dragonfly Hydroscooter comes in two variants to match your need for speed and style. The standard Dragonfly or DF model is best for urban roads and parks with a more streamlined design that more closely resembles conventional e-scooters, except for the fact that it has four wheels. The Dragonfly X or DFX, on the other hand, is made for speedsters and adventurers with its wider fender and hand guards. Whichever model you choose, you will get an eye-catching electronic scooter whose handsome looks testify to its power. 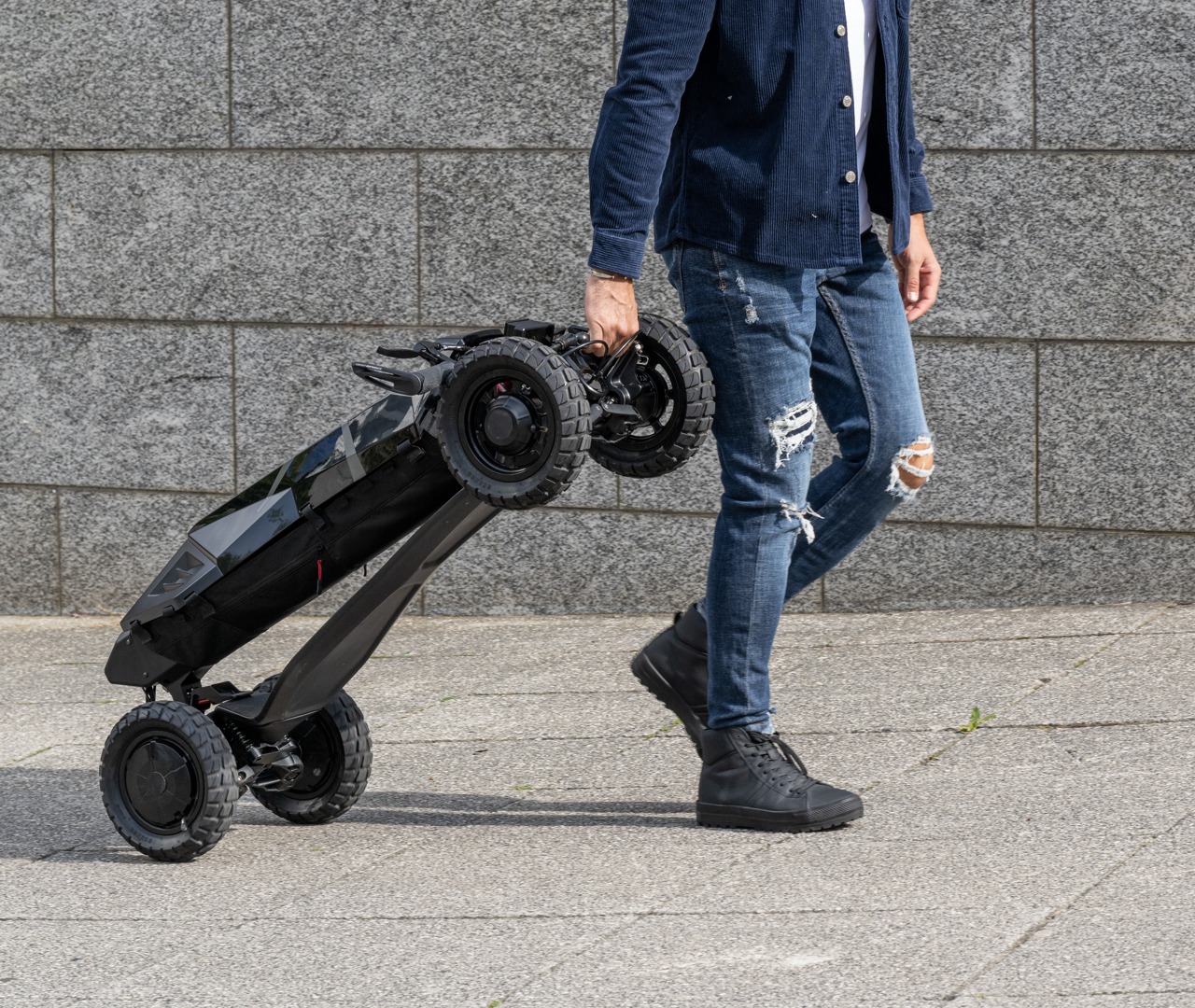 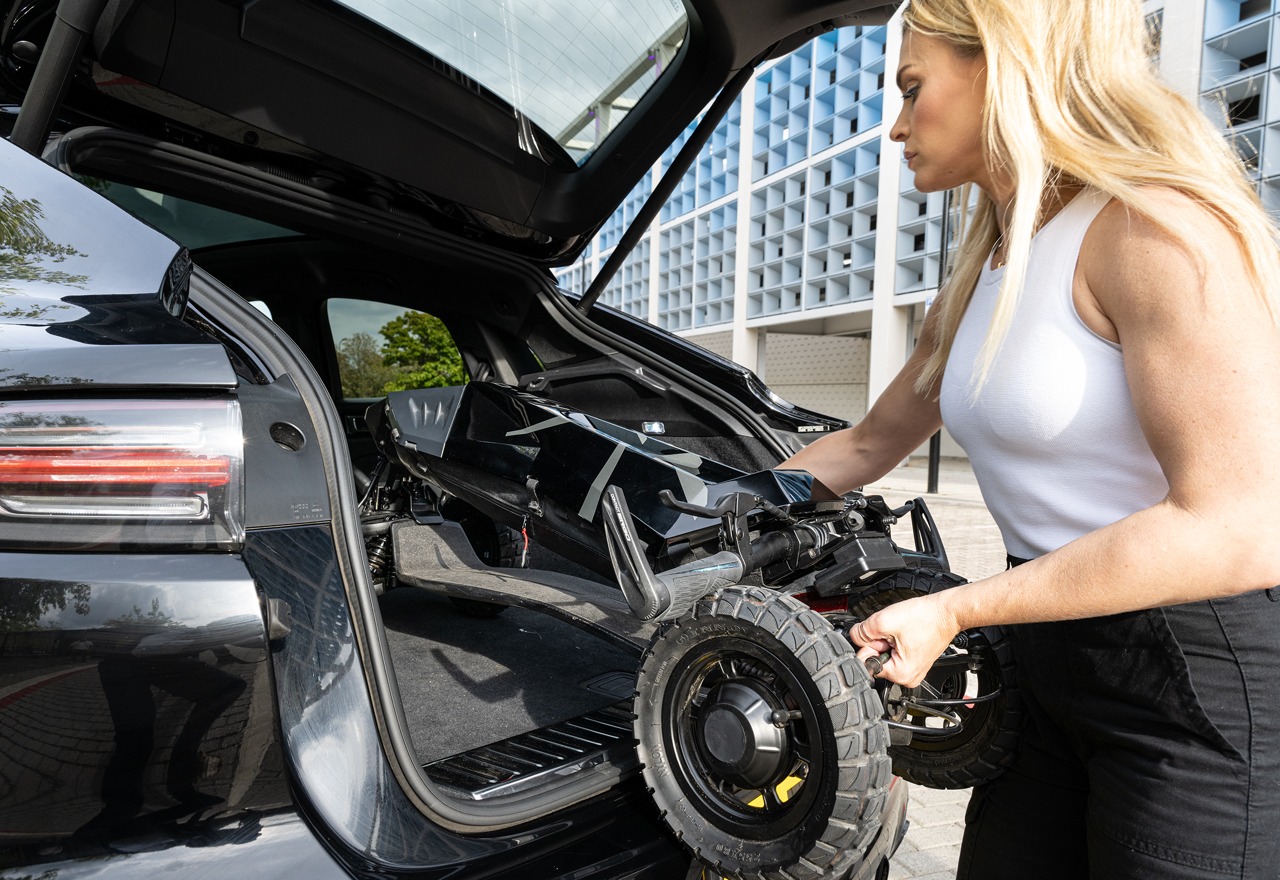 As mobility becomes more complicated and congested, the need for personal mobility devices will continue to rise. So, too, does will the need for more advanced transportation options that will fit the needs of people, both in terms of power and looks. Starting at around $1879 for the DF model and $2242 for the DFX variant, the Dragonfly Hyperscooters push the envelope of electric scooters, ushering in a new era of e-mobility.

https://www.kickstarter.com/projects/honobono/yoku-japanese-craftsmanship-at-its-finest Towels are garments too. Sure, they’re designed specifically to dry you down after a bath, but their absorbency aside, towels are meant to be…

Keeping a dog is one thing but being able to care for her the way she would want is entirely another. Pet-friendly tech innovations have…

Does This Dip Taste Any Different?

I don’t know if you fellow YD’ers are aware of the fact that my co-writer Long Tran is rumored to be an awesome cook. Rumored…