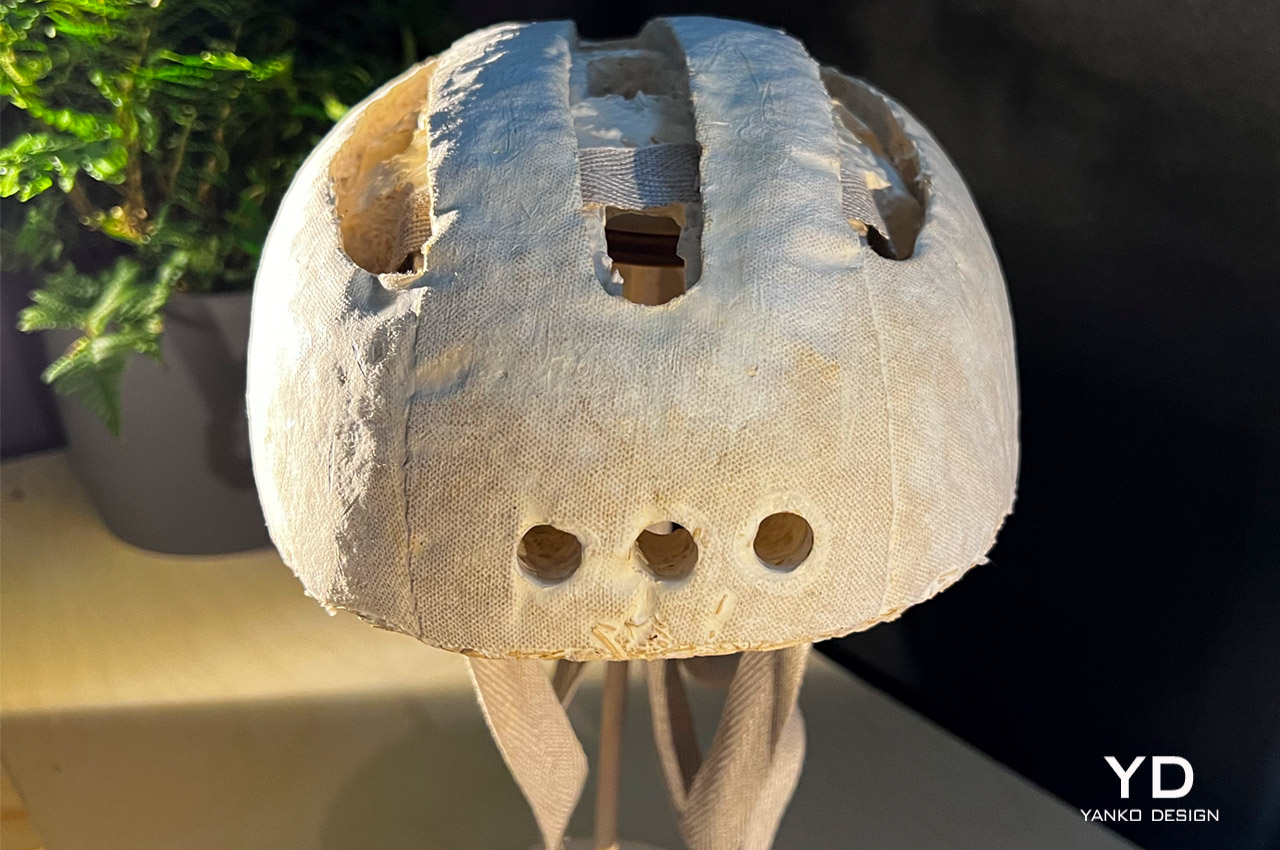 The London Design Festival is an annual event that takes place in the capital of the United Kingdom. It promotes London as a pioneering design capital globally, and this year the festival celebrated its 20th anniversary! ‘Arup’ was a key partner this year, and was involved in a myriad range of activities and projects. Arup’s Foresight team presented an exhibition on the topic of ‘Regenerative Futures’. The team explored what a regenerative society could look like in the future. They showcased their explorations through a series of props from designers and researchers who work in regenerative design themselves.

“The concept of regenerative design calls for a long-term transformation to combine the needs of people with those of the planet by re-thinking and redesigning the world around us. ” Which is exactly what Arup succeeded in doing – they’ve created designs that help humans and nature co-exist seamlessly.  Other regenerative companies featured in the exhibition were – EOOS NEXT, Blast Studio, Lulu Harrison, Rachel Horton-Kitchlew, Green&Blue, SPACE10, and Studio MOM. 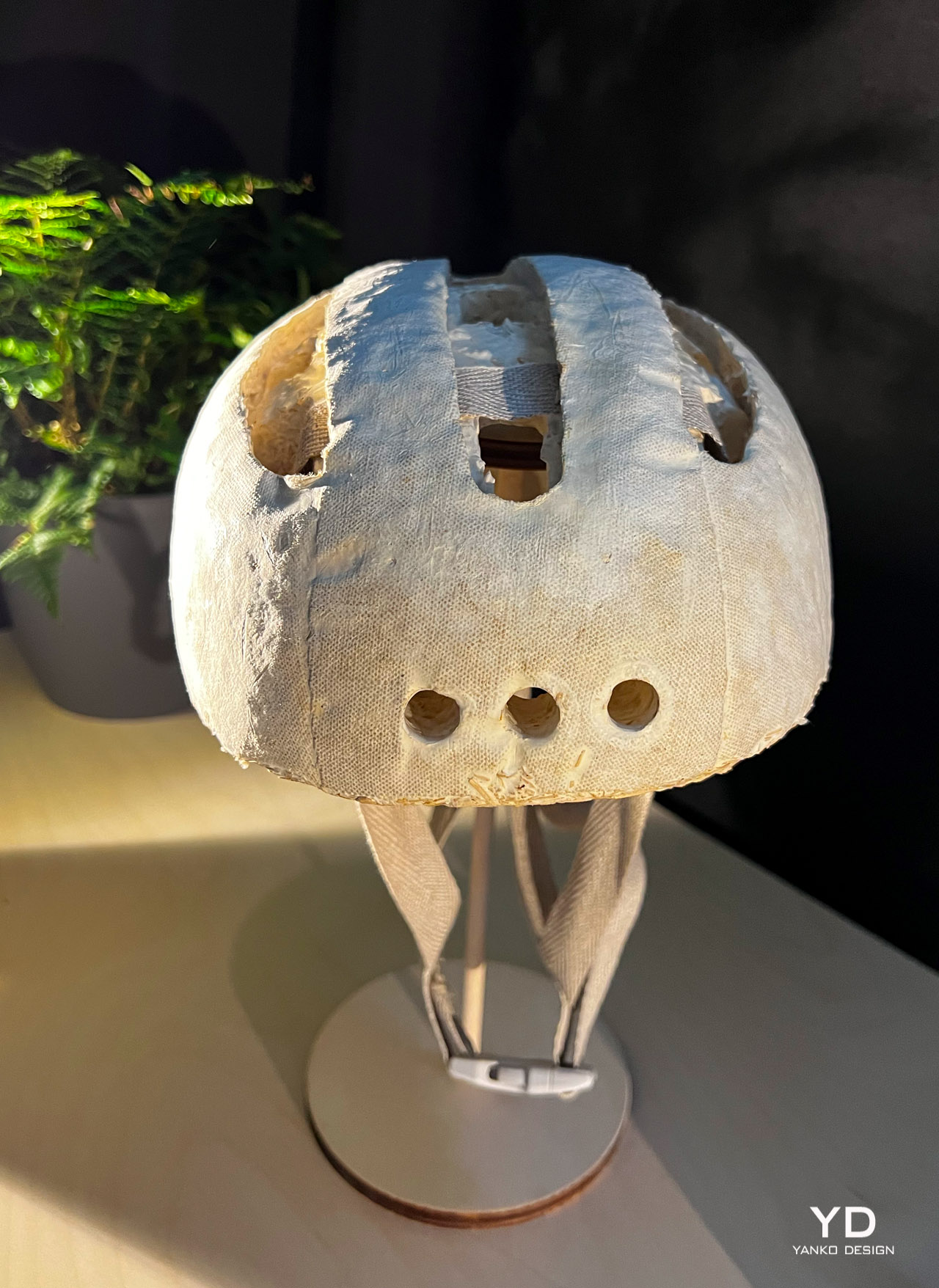 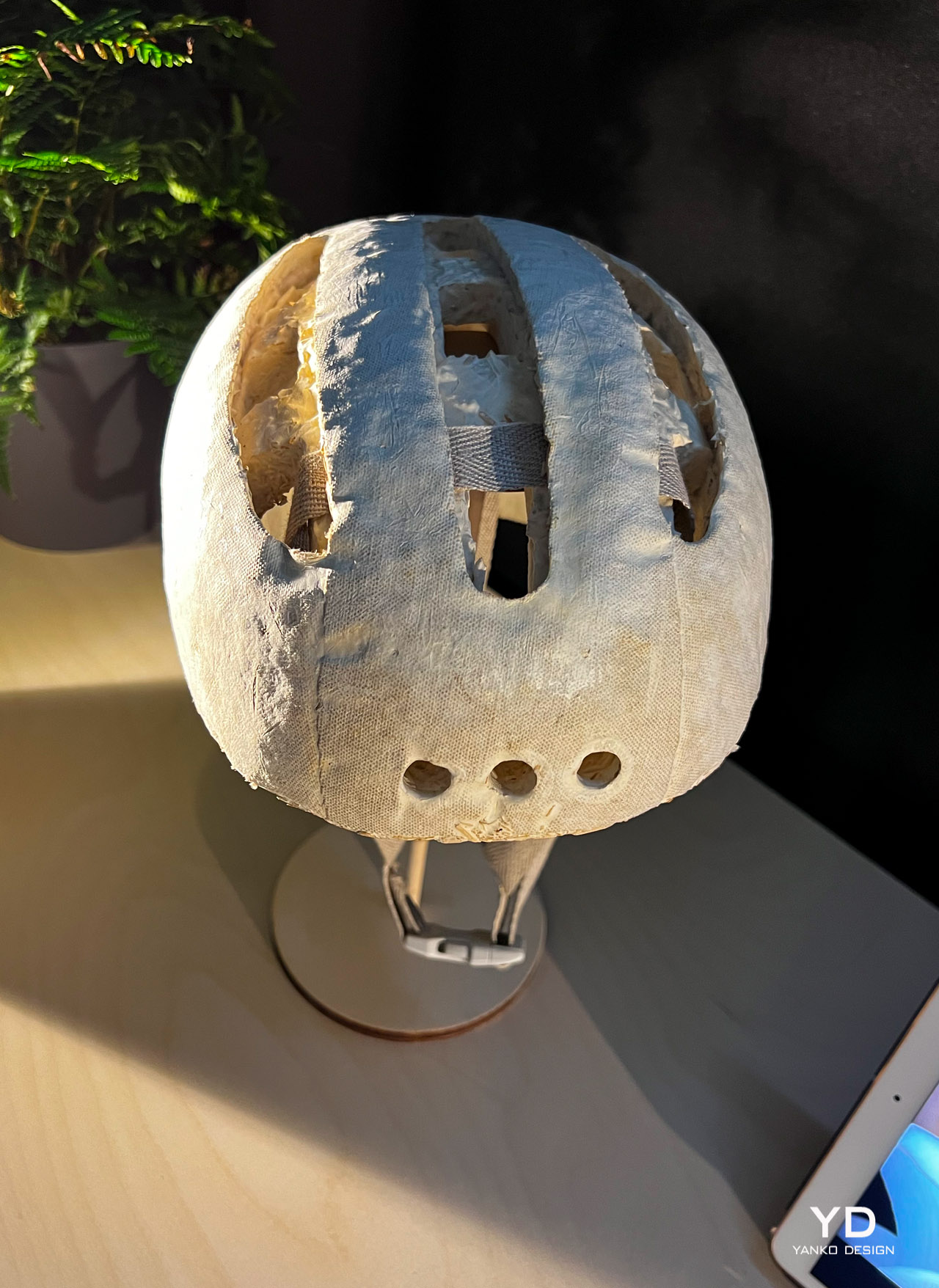 Arup and Studio MOM collaborated to create MyHelmet – a mycelium bio-manufacturing. In Arup’s imagined regenerative future -Mycelium has become incredibly popular, and the market for it has even exceeded that of concrete! In fact, the global mycelium market is valued at $6.17 trillion this year and will reach $9.72 trillion by 2070. This helmet showcases the versatility of this material. Mycelium has found immense functionality in the field of fashion, food, product design, and even the built environment industry! 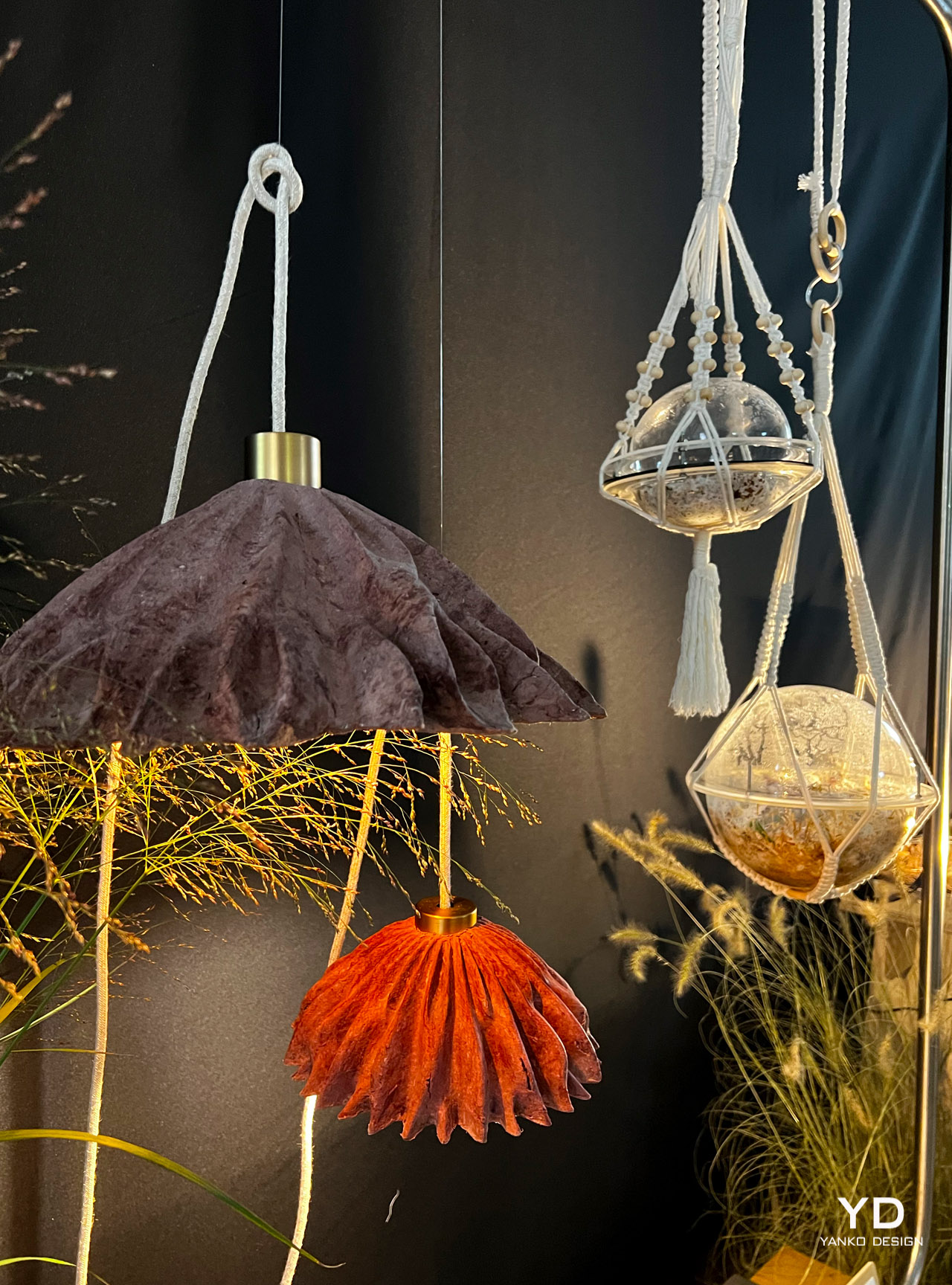 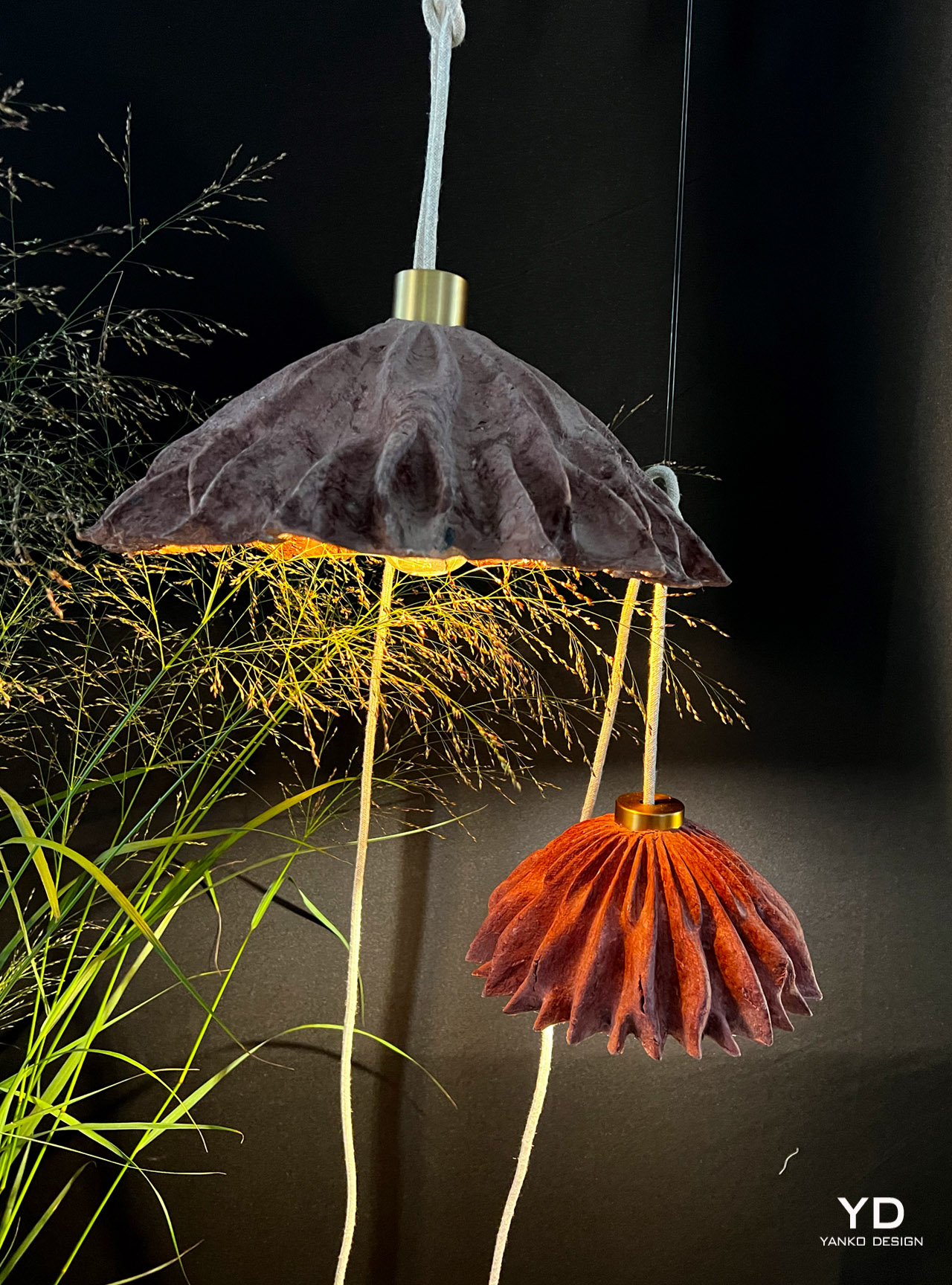 The Blast Studio created the ‘Coral Lamp’ from waste coffee cups! Since the ‘Stop-single-use’ campaigns in favor of banning single-use coffee cups haven’t worked in the past, this waste stream is utilized as a valuable material resource in the future. By transforming coffee cups into beautiful lamps – the reusability and potential of an otherwise harmful material have been showcased. 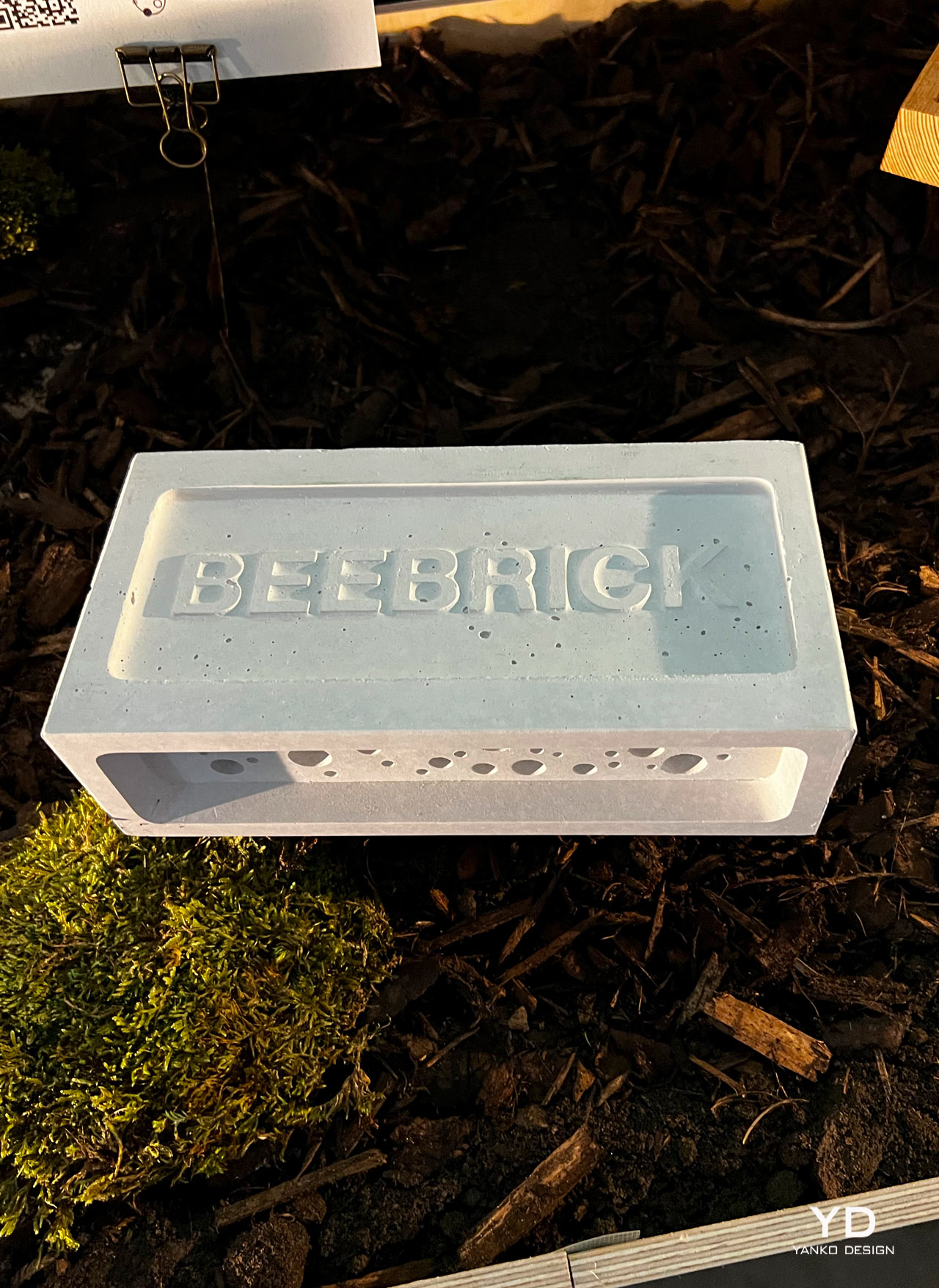 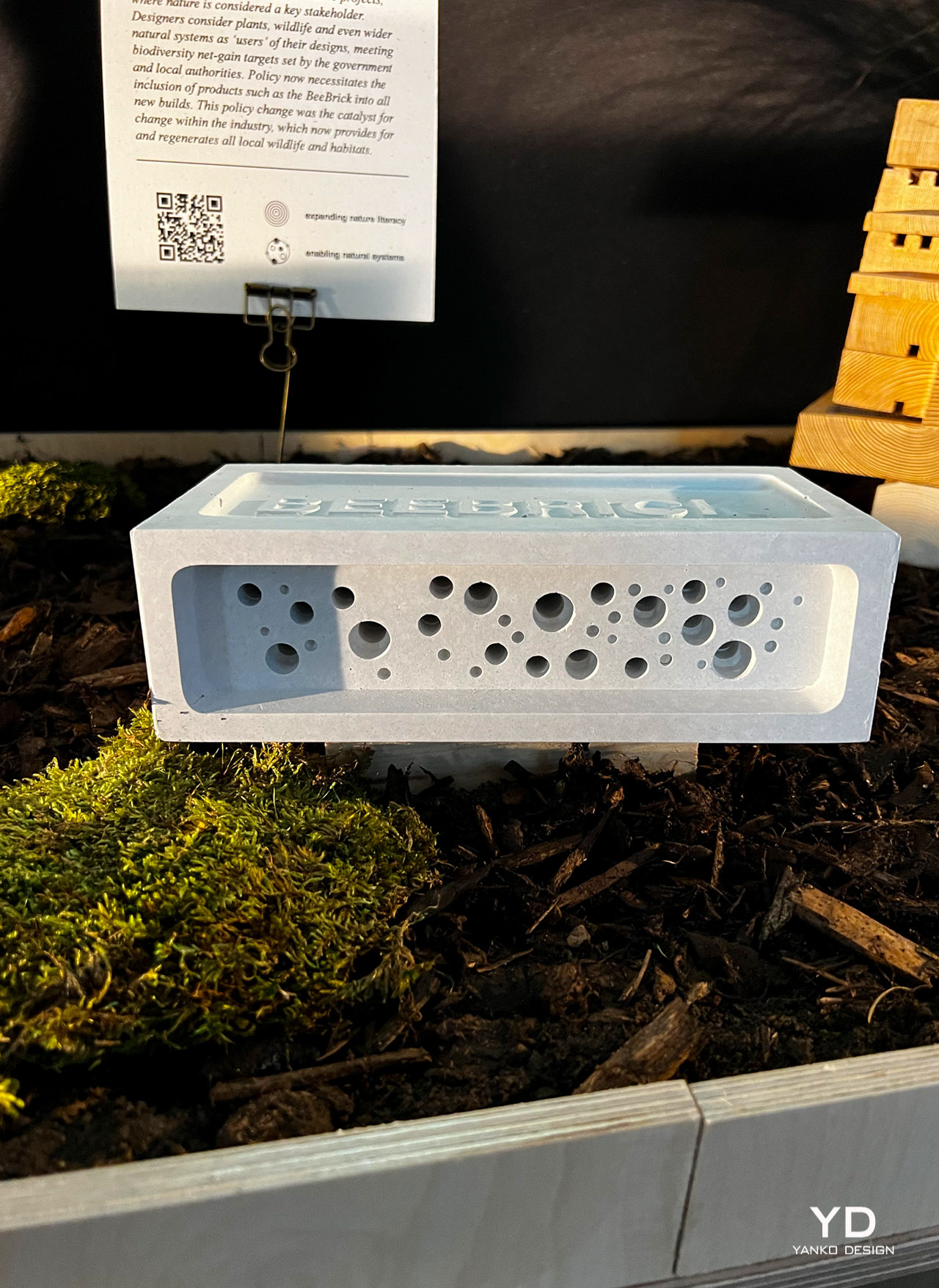 Designed by Green&Blue, the BeeBrick is a safe urban nesting for solitary bees. In the future, designers consider plants, animals, and large natural systems as actual ‘users’ of their design. According to rules and policies, products such as BeeBrick have to be included in all new builds. These policies now provide habitats for all local wildlife! 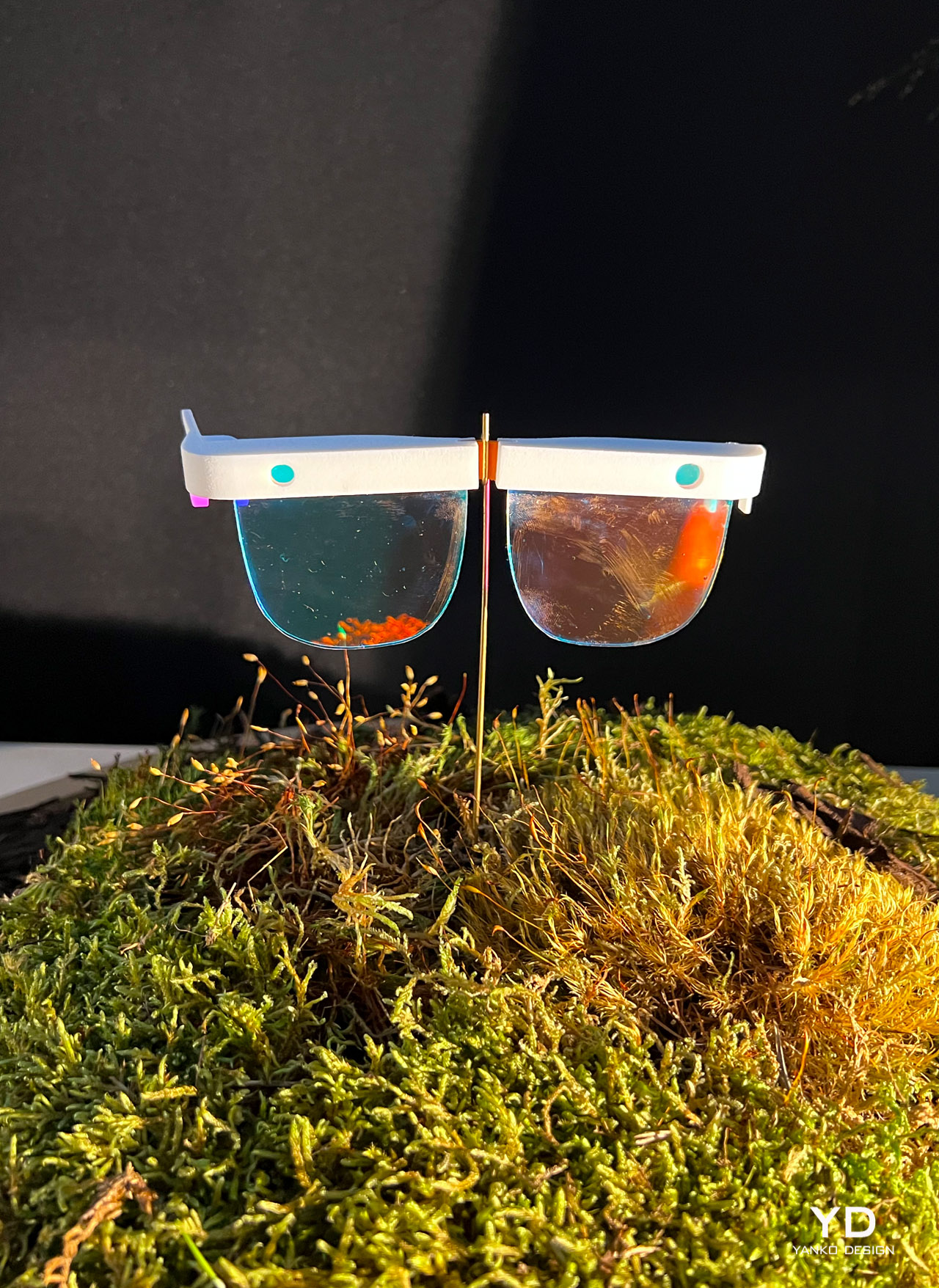 In the future, Augmented Reality technology has developed even further – allowing physical and virtual environments to merge seamlessly, through a viewing mode called ‘Mirrorworlds’. Foresight at Arup created these AR glasses which allow designers to interact with nature, and receive feedback in real-time while conducting fieldwork! The developed AR tech allows designers to easily comprehend contextual nature-based data, enabling them to deliver more net-positive outcomes. 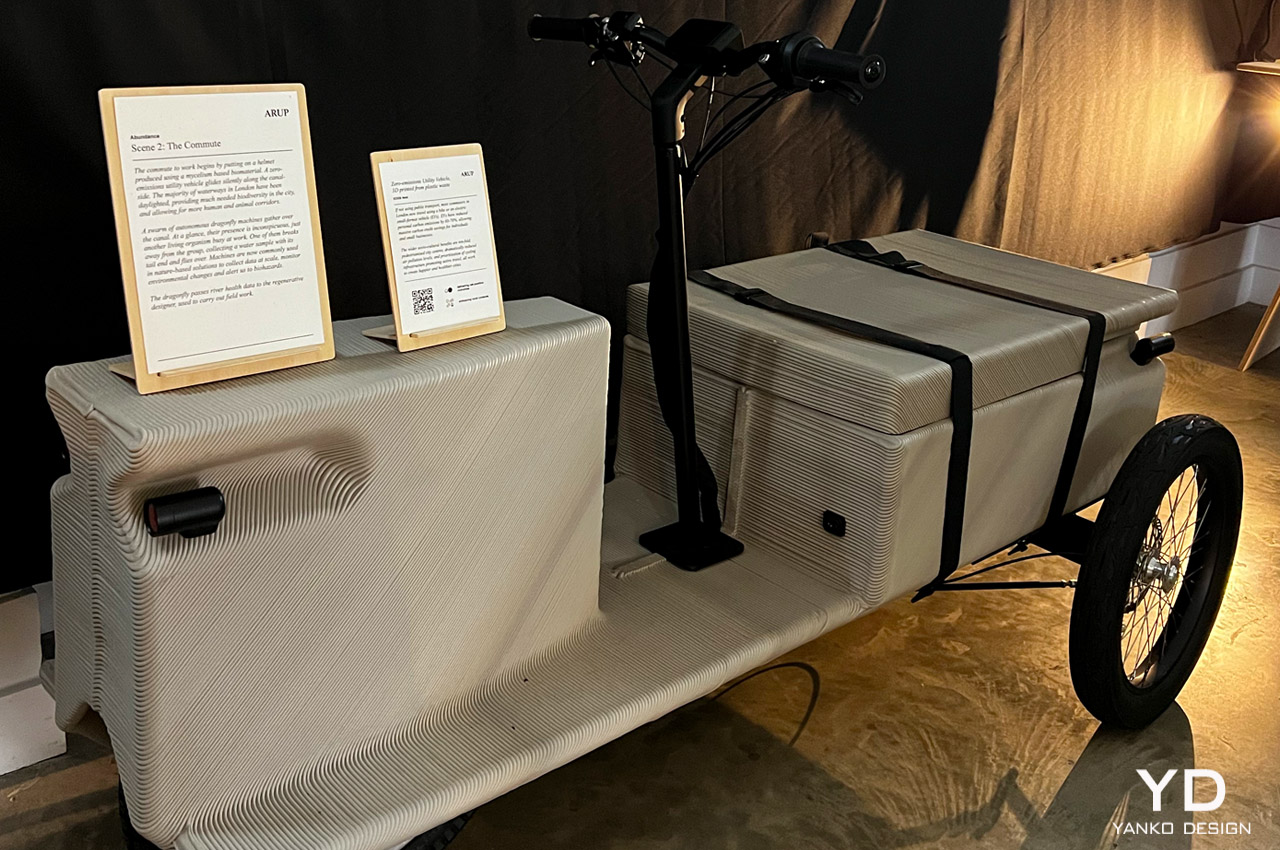 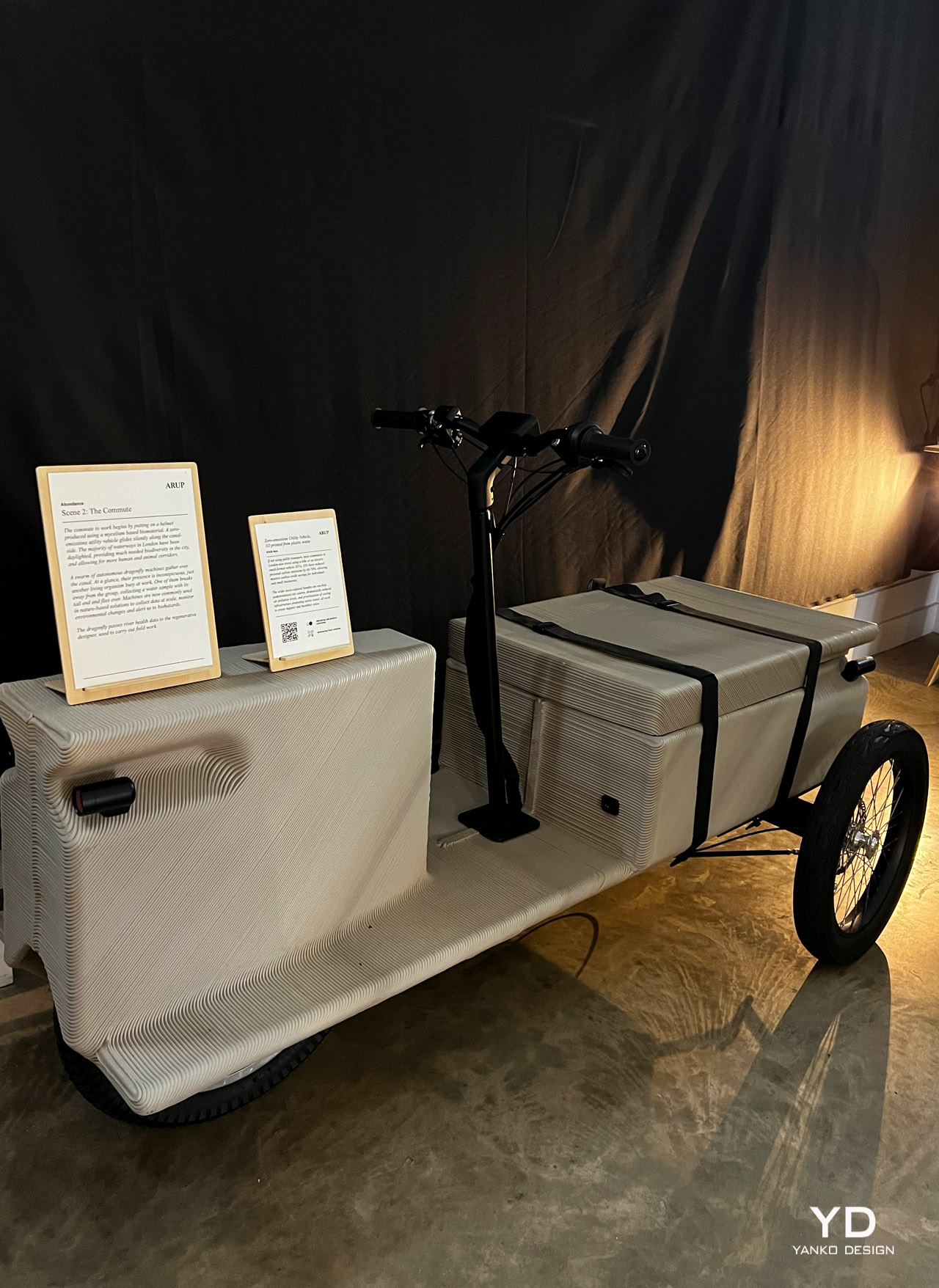 EOOS NEXT designed a zero-emissions utility vehicle that is used as a form of transport by commuters every day. It is 3D printed from plastic waste. When they aren’t using public transport, commuters travel using a bike, or an electric small-format vehicle (EVs). This has reduced personal carbon emissions by 60-70%, allowing humongous carbon credit savings for individuals and small businesses. 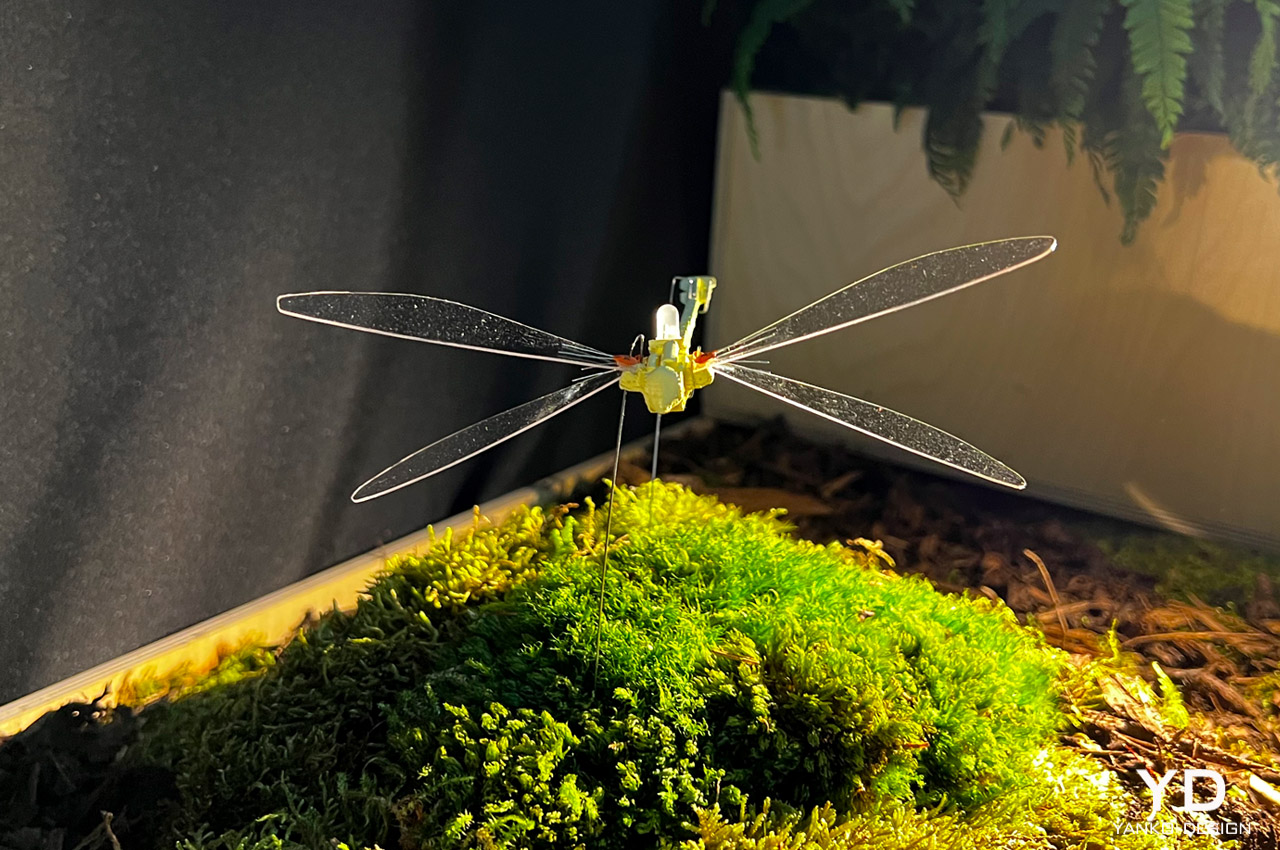 Foresight, also designed, a ‘Dragonfly’. This Dragonfly functions as an autonomous data collection machine. No one really pays attention to them in the future. They are simply regarded as living organisms busy at work! They are used in nature-based solutions, to collect data, and deliver it to regenerative designers, so they can utilize it for their fieldwork. These dragonflies also monitor changes and alert biohazards.

Nowadays almost anything and everything is eco-friendly and sustainable, so why not our vacation getaways? Inspired by this ideology, Finnish designer Robin Falck created an…

The Zohan of Astromech Droids

I’m sure you remember R2-D2’s brief stint as a server on Jabba the Hutt’s sail barge. I bet you’re aware of R2’s fancy-smacy real-world cousin…

At first glance, SoundFIT might look like your average fitness band. Upon further inspection, however, you’ll notice that it’s anything but average and its functionality…