After upgrading the bike helmet by putting visibility, indicator, brake lights on them, the Lumos team is back with the Firefly, a tiny but powerful and versatile light that charges wirelessly, attaches magnetically, and can even sync up with other Fireflies or Lumos products.

Statistics report that a majority of bicycle accidents happen because of reduced visibility. The fact that bicycles are lighter, human-powered, and good for the environment are also their core disadvantages. Bicycles are inherently quiet, have a slim profile, and don’t come with large lights the way motorcycles or cars do. Just increasing a bicycle’s visibility can help mitigate the chances of accidents – and it’s this fundamentally simple idea that the Lumos Firefly hopes to solve. 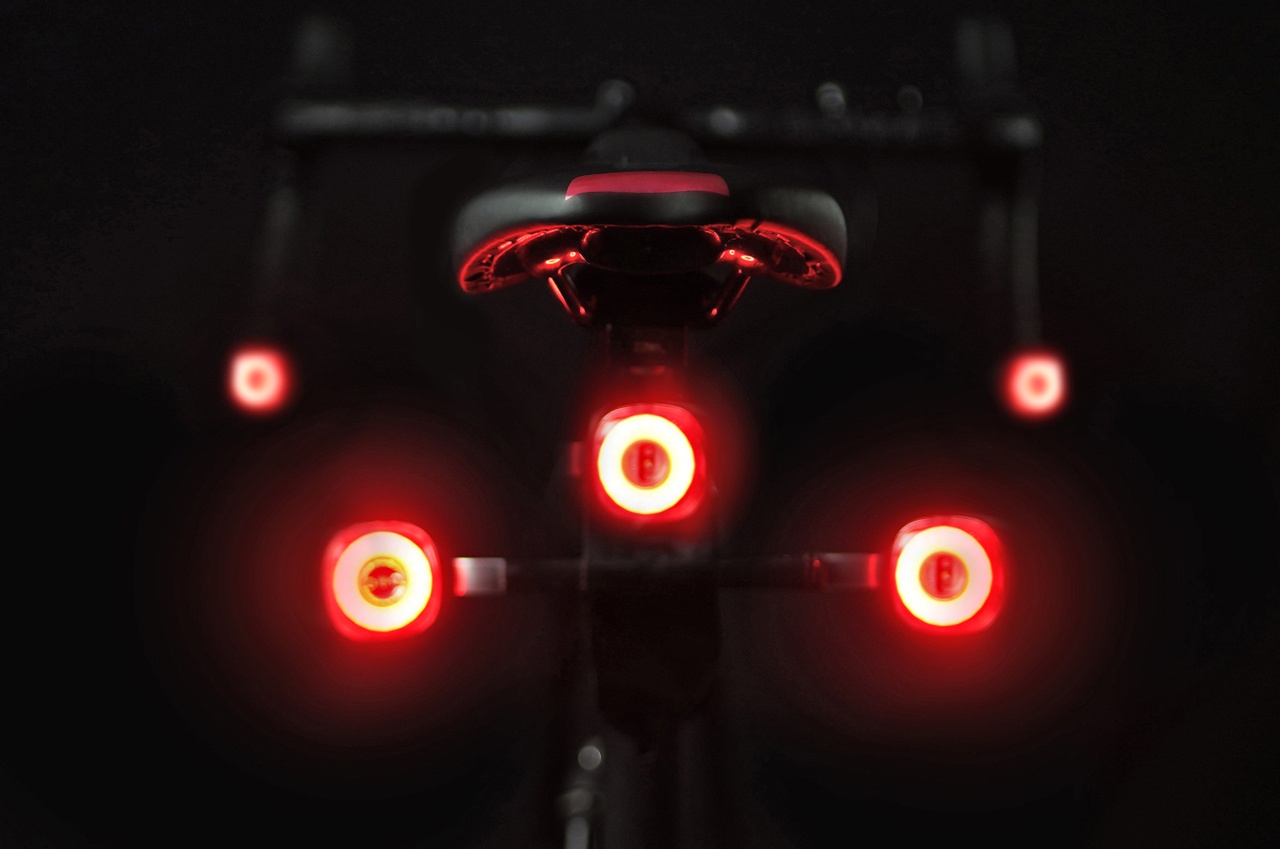 The Lumos Firefly comes with a compact, wireless design, and with endless possibilities. The tiny gadget is equipped to shine with white, orange, and red lights, making it perfect for front-facing visibility, rear visibility + braking indication, and turn indication. It’s built with a durable, sealed design that’s IPx6 waterproof so a little rain won’t harm your biking prospects, and comes with a magnetic attachment that lets you snap it on before a ride and snap it off when you’re done.

Turn signals and brake lights to make you more predictable. 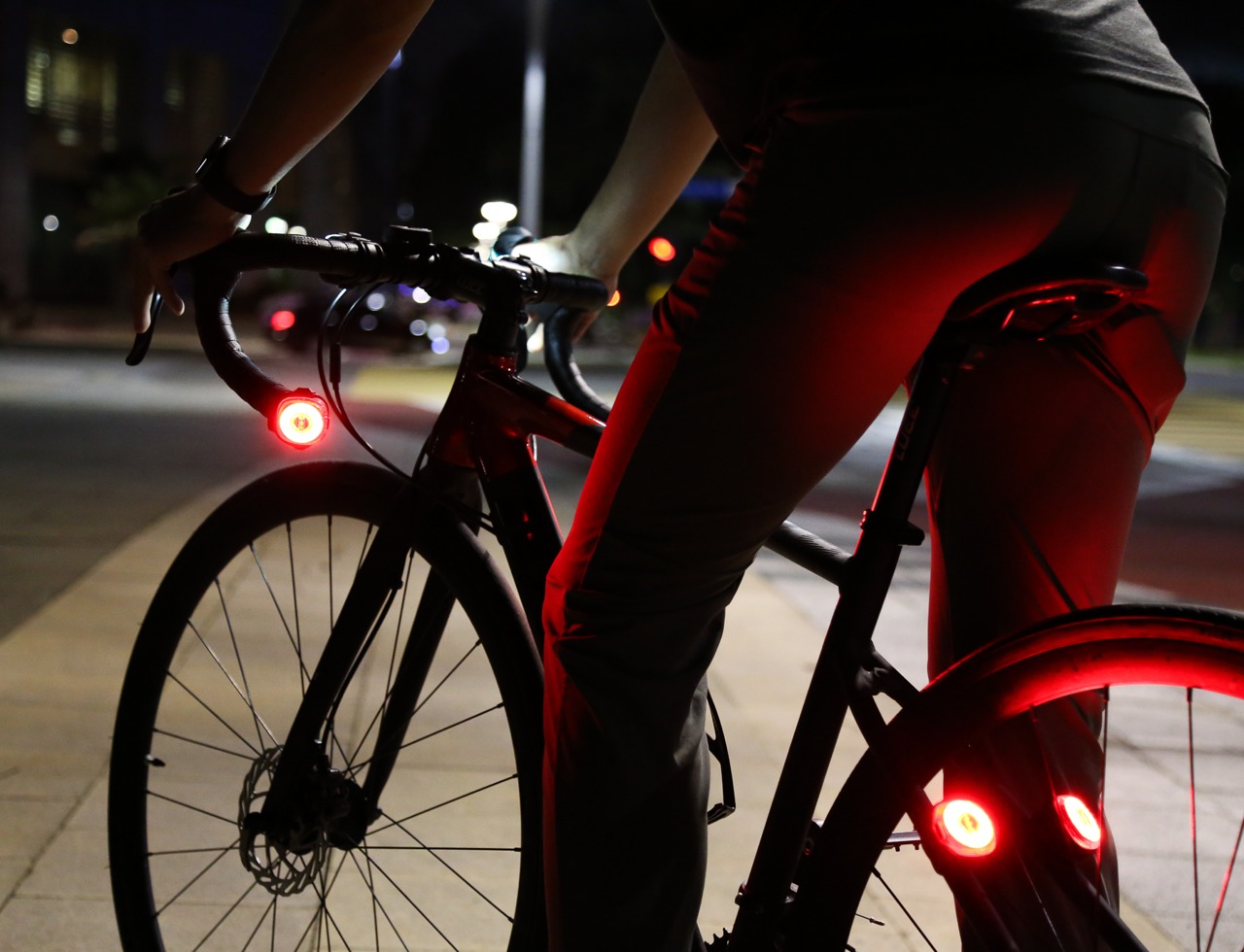 The tiny little light has strength in numbers, claims the Lumos team. Although it’s fairly possible to just use one Firefly by attaching it to the front, side, or back of your bike (or even yourself), the Firefly delivers better results when paired in twos, where they work as visibility and brake lights as well as turn indicators.

A handlebar remote (sold separately) allows you to wirelessly trigger the turn signal whenever you want, and you can program your Fireflies to respond accordingly. You can use as many as 8 Firefly lights with one bicycle, and the Lumos app lets you assign a location to each Firefly simply by dragging and dropping it onto a grid – so each individual light is aware of its location, be it the front or back, or the left or right. That way, only the rear lights flicker red when you brake, and the lights on the left and right intuitively blink when you set the turn indicators.

The Firefly’s most impressive abilities, however, lie under its hood. You’d be inclined to believe that the Lumos Firefly is just another light for your bicycle, but the company assures that isn’t the case. The lights aren’t just multi-colored or wireless – they’re capable of automatically synchronizing too. The team at Lumos arrived at the fact that the best way to convey visibility was to have lights flickering in unison, rather than a scatter of sparkling LEDs. To that end, multiple Firefly lights can pair up with each other and blink at exactly the same time, conveying visibility without distracting the rider or people around.

This synchronization happens with multiple Fireflies on the same bike as well as with a host of Firefly lights on different bicycles that are moving together – a feature the Lumos folks call Team Sync. They even coordinate with the lights on your Lumos helmet, creating a tight ecosystem of products that just deliver exactly as intended. What’s more impressive is that multiple lights paired together will also switch off together when you switch one of them off – so you don’t need to go manually turning 8 lights off at the end of a ride.

Each Firefly carries red, yellow and white diodes, it can act as either a front, rear and/or turn signal light. 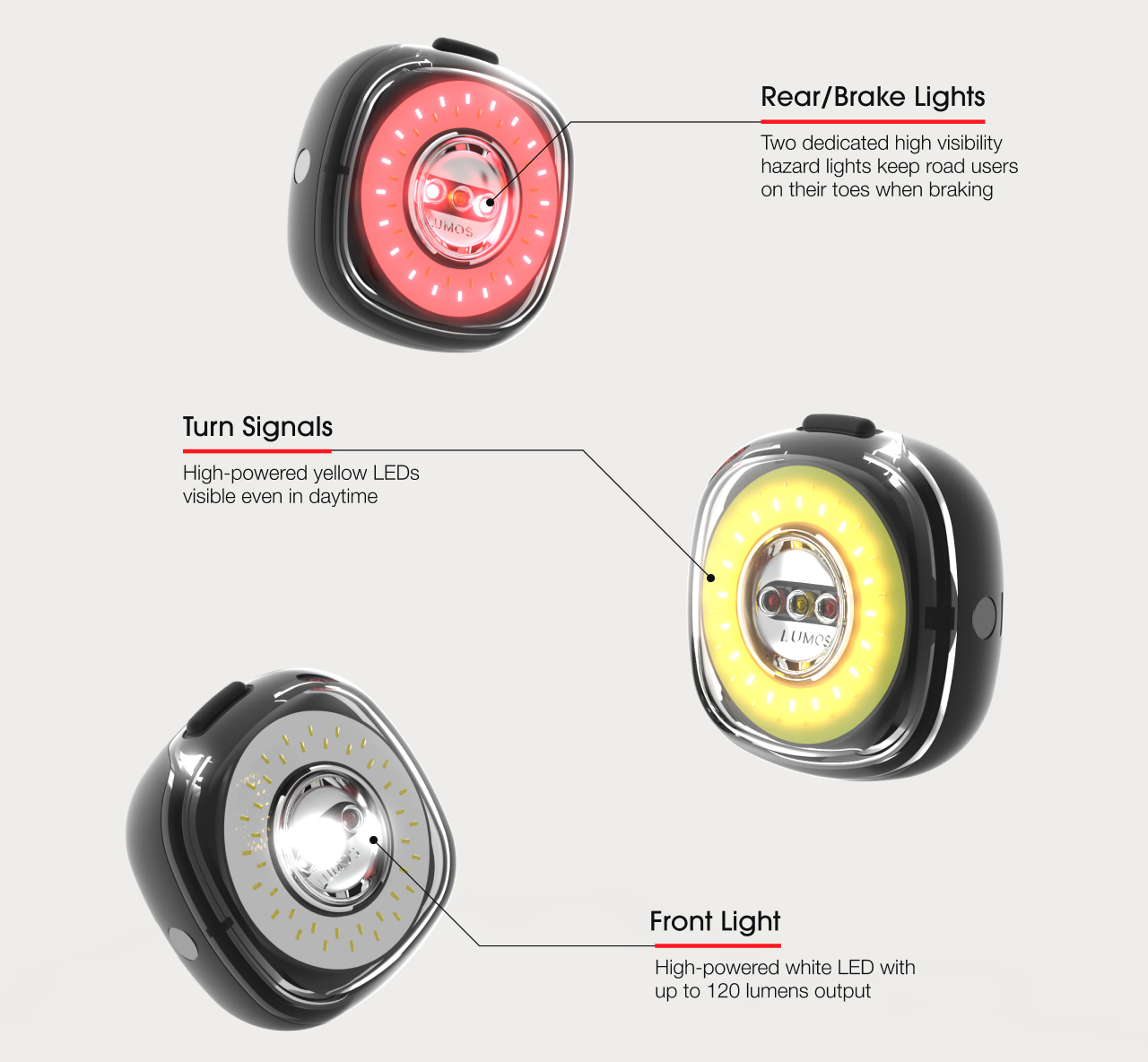 Designed for portability, convenience, and smart versatility, each Lumos Firefly comes with a series of universal magnetic mounts that strap on your bike’s frame, handlebars, or even your arms and backpack. The mounting system lets you magnetically snap the light on when you need to use it, and take it off when you’re done (so that they don’t get stolen). On a full battery, the Firefly light can last anywhere from 2.5 hours to 33 hours, depending on what brightness setting and flickering pattern you use them at.

They even charge wirelessly using either the charging cradle that comes as an add-on purchase, or your standard wireless charging pad. If your phone supports reverse wireless charging, you can practically use your smartphone to charge your Lumos Fireflies too! Early Bird backers can gab their Firefly starting at $29 for a single unit, or opt for their most popular bundle of four at $115 which also includes a charging cradle for your lights. An extra $25 will get you the wireless turn indicator remote.

The Solar Bike is a cool concept that allows us to work some calories and conveniently switch to electric pedaling once we are tired. The…

Love the idea of owning the iBackpack, a simple communicating tool for cyclists. The backpack features a transparent window through which your tablet (aka iPad)…

Do you know what is worse than a delayed flight when you are traveling for work? Waiting in an uncomfortable seat in the lounge which…