“The single biggest challenge is the screen itself”, says Kevin Beck, Senior Story Technologist at Lenovo (although I’m not entirely sure what that title means). Beck’s statement is rather revealing, as it’s a complete affirmation of the fact that a folding laptop/tablet is a MUCH better idea than a folding phone. Phones are used/opened hundreds of times each day, compounding to thousands of times in just two weeks alone. Laptops/tablets, on the other hand, are ‘opened’ much less often, which translates to a dramatic decrease in the stress taken by a folding display. Moreover, laptops and tablets can usually afford to be thicker than phones, which gives you a lot of leeway to build a better hinge that can withstand friction, and constant folding, and is therefore built to last for years.

Meet the ThinkPad X1 Fold from Lenovo, a laptop-tablet hybrid that celebrates its foldability. In a world where MacBooks don’t look like books, we’ve got ourselves a ThinkPad that opens like one! Now in its second iteration, the ‘next gen’ Thinkpad X1 Fold sports a slimmer design with thinner bezels and a much larger screen with a 16-inch diagonal (as compared to the 13.3-inch one on the previous ThinkPad X1 Fold from 2020). The tablet folds right down the center, sort of like a book, giving you a slim device that’s easy to carry and versatile enough to be used in a variety of formats. You can use it as a tablet in conjunction with a stylus, or fold it in an L-shaped format and use it as you would a laptop… albeit with a touchscreen keyboard underneath your fingertips. If you want a more analog experience, there’s a mechanical keyboard attachment too that wirelessly connects to your X1 Fold, and a stand that you can prop your device onto, turning it into sort of a desktop-style experience. 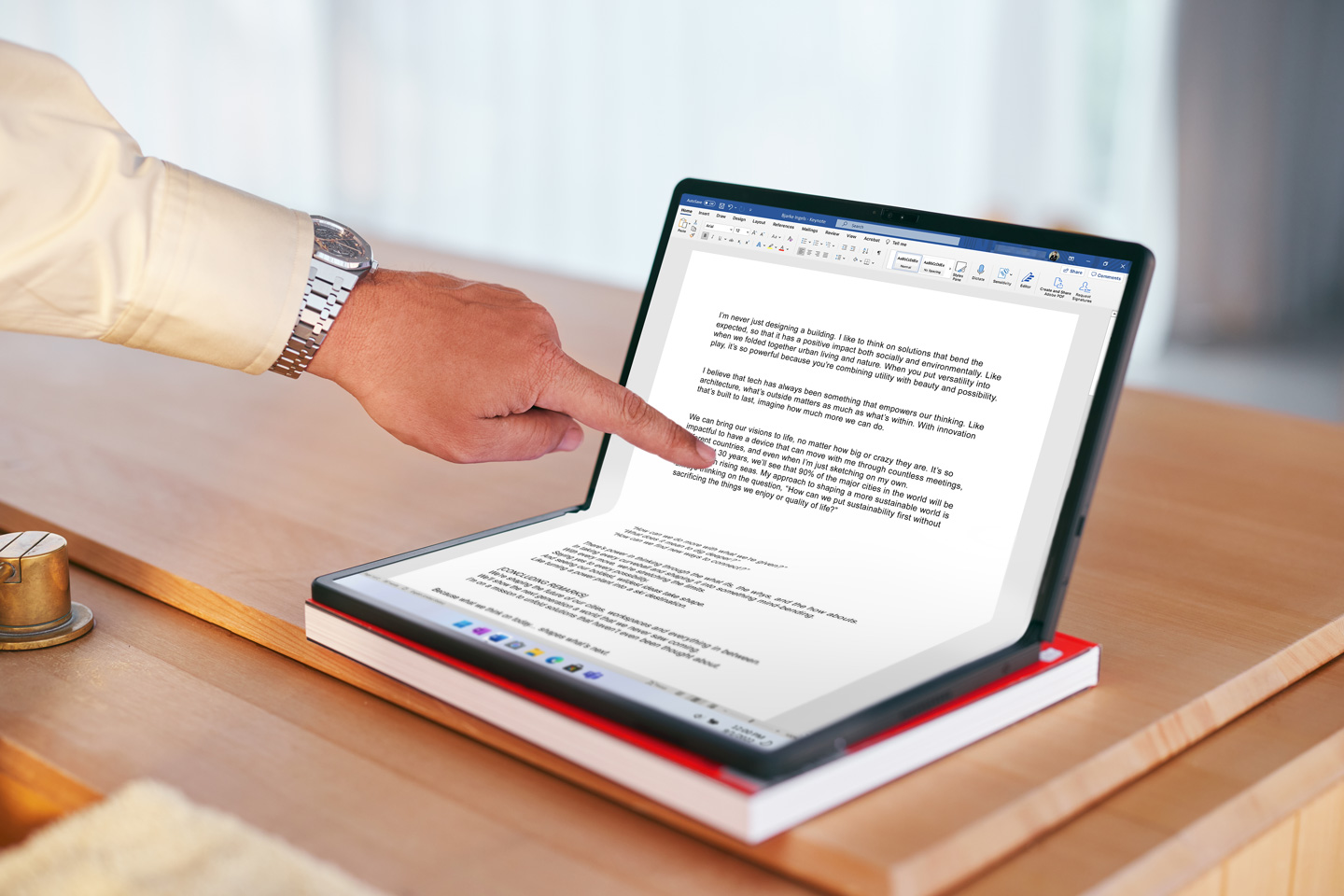 On paper, the ThinkPad X1 Fold boasts some rather commendable specs. It sports a 12th Gen Intel Core™ i7 processor on the inside, with the ability to go up to 32GB LPDDR5 memory and 1TB storage. The 16.3-inch OLED display has a 4:3 resolution when completely open, bringing it to 3:2 when folded in half (that’s 15:10, which is just about comparable to the 16:9 aspect ratio found on regular laptops). The X1 Fold can be used solo or configured with an optional magnetic-attach pen utilizing Wacom protocol for a true tablet-esque experience. For laptop-lovers who need a tactile keyboard, the ThinkPad X1 Fold offers an optional full-size backlit ThinkPad keyboard, with TrackPoint and
large haptic touchpad. 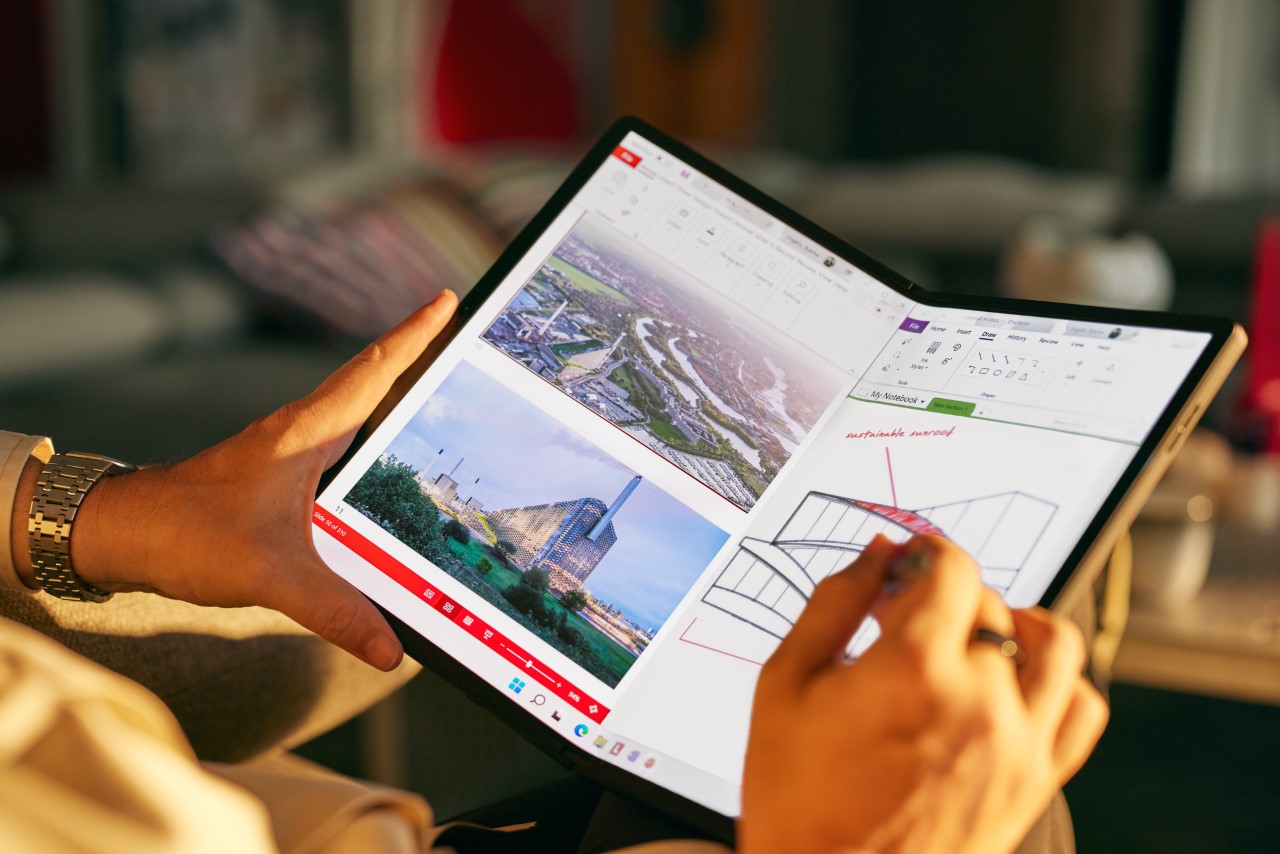 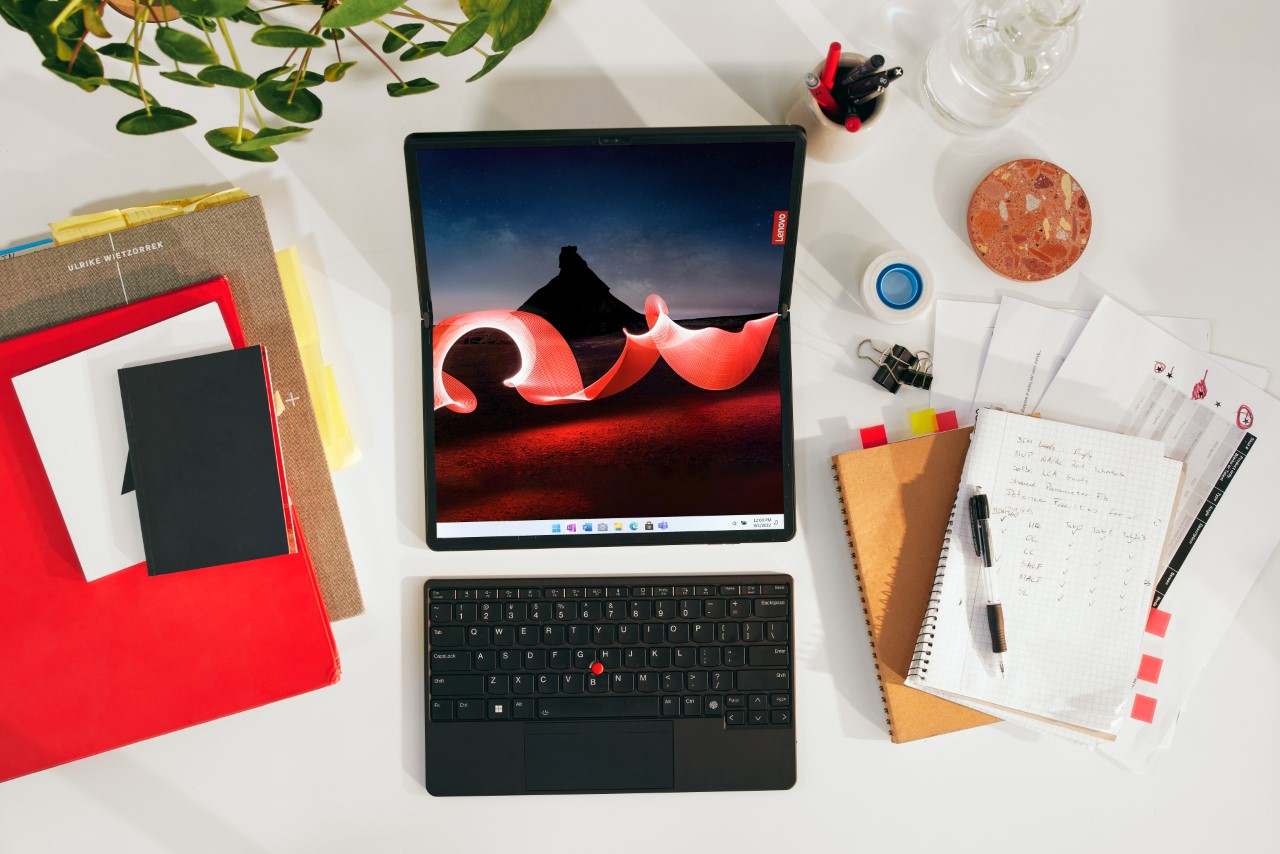 The beauty of the Lenovo ThinkPad X1 Fold lies in its versatility. The company touts that the device can be used in 5 different modes – the clamshell laptop mode, landscape ‘desktop’ mode with the keyboard, portrait desktop mode with the keyboard (a unique template that Lenovo claims really excited early users), book mode, and finally tablet mode with either the touchscreen input or the stylus. “Productivity, collaboration, content consumption, reading, writing, editing, and so on are all a breeze in whichever mode one feels most comfortable with”, Lenovo says. “The modes are managed by an intuitive Mode Switcher interface” 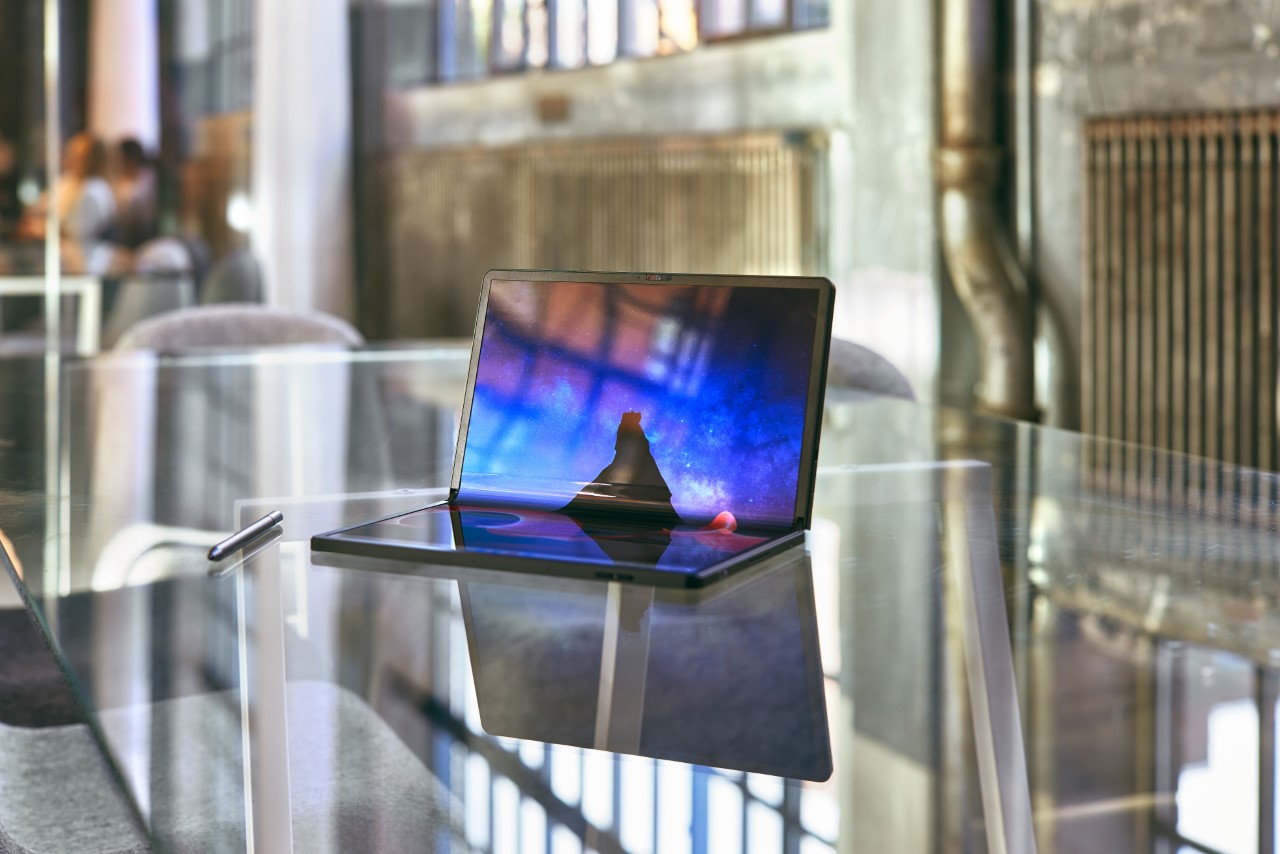 The hybrid folding tablet comes with a camera array that’s placed on the shorter edge of the bezel (sort of like on the iPad). This means it faces you when you’re using it in laptop mode. Multiple microphones placed along the sides of the bezel help with orientation and spatial awareness, allowing the X1 Fold to be used in a variety of ways. 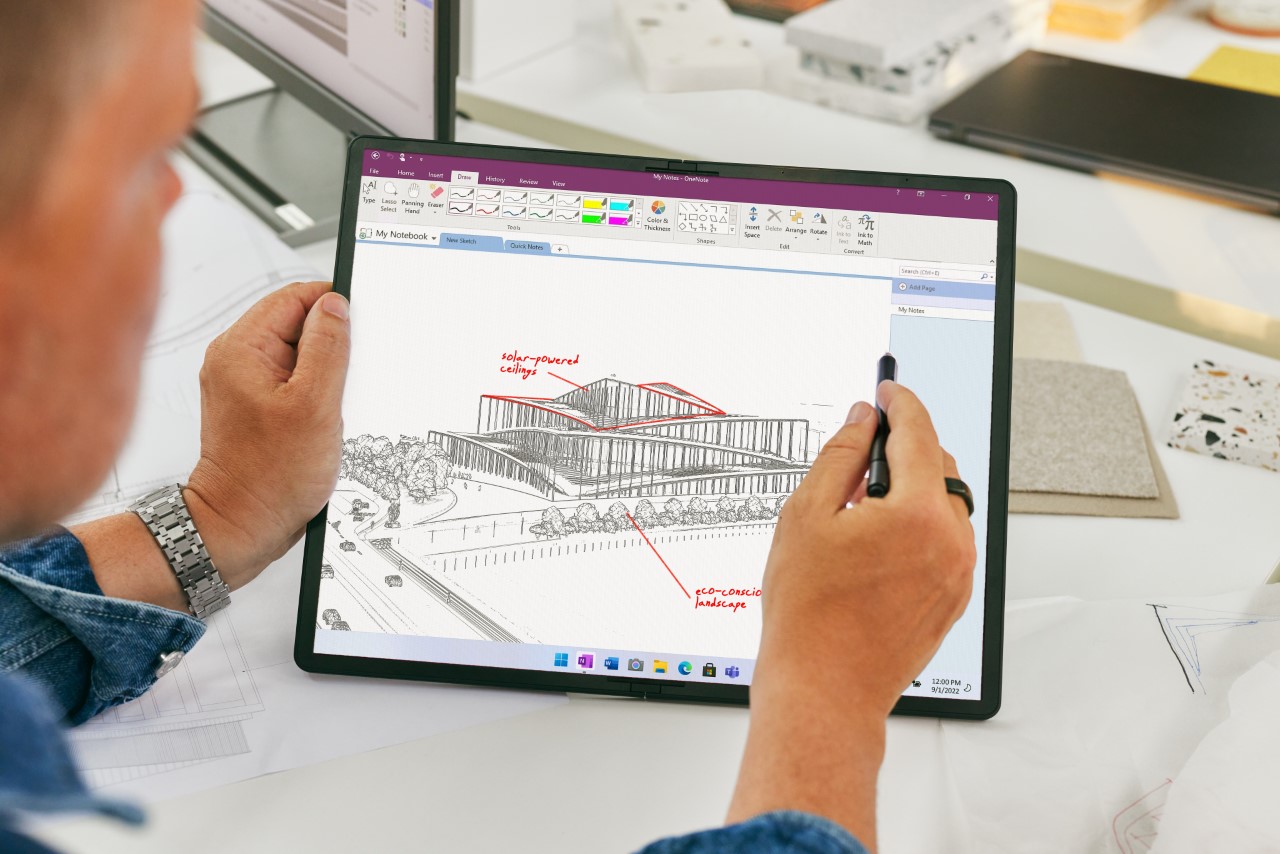 The one largest drawback with a 16-inch folding tablet is the battery life, given that it’s powering such a massive display. The ThinkPad X1 Fold comes with a 48Wh battery on the inside that is intelligently managed by the tablet’s chip to optimize performance based on usage. When left idle, the X1 Fold’s display automatically dims to save battery, and when you walk away from the device, the screen automatically shuts off, saving power. It even auto-wakes when you return, so you can pick up right where you left off. 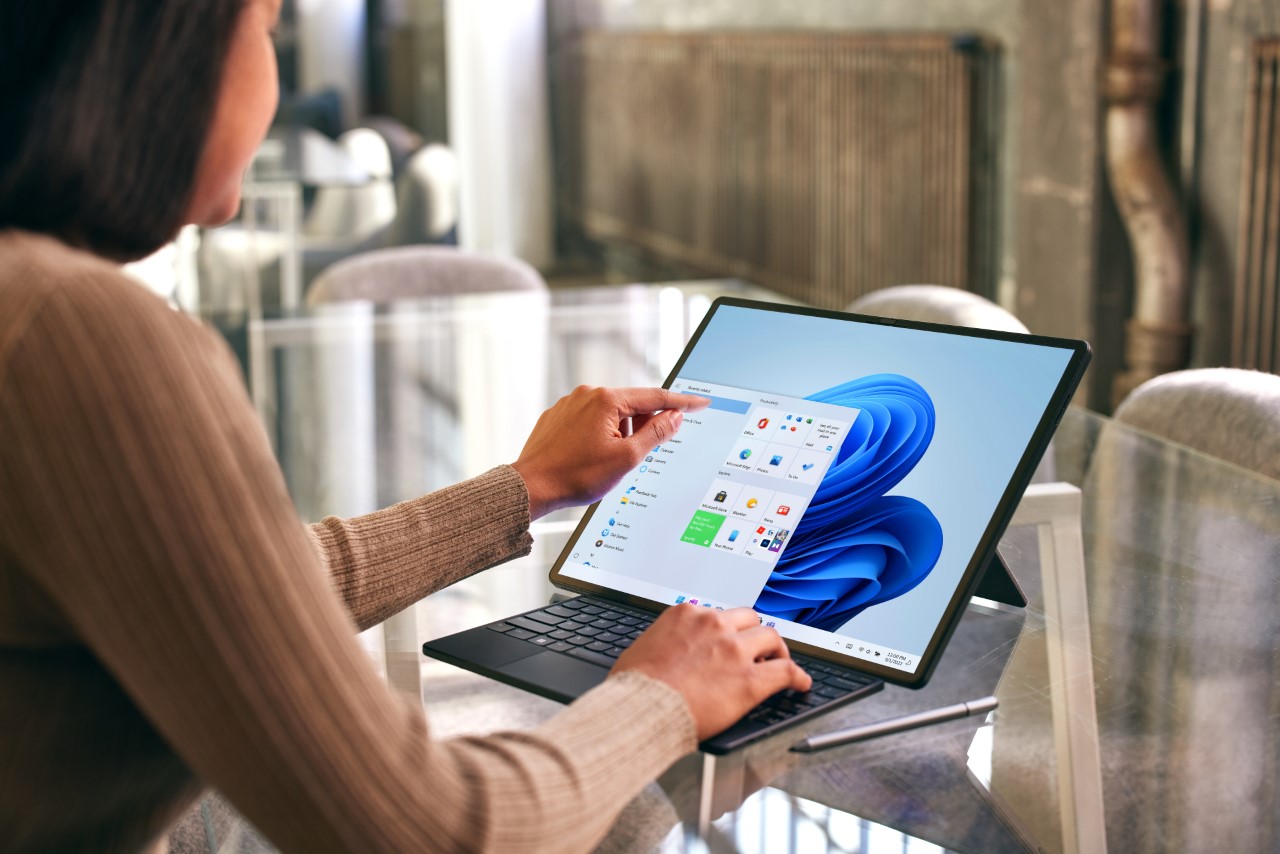 With all those impressive specs and abilities, the ThinkPad X1 Fold won’t come cheap. It begins shipping in November with a starting price of $2499. Higher specs will cost you more, and the keyboard, stand, and stylus are sold as optional accessories.

The price, however high it may be, is a factor of exactly how impressive and innovative this little gizmo is. Folding displays aren’t quite mainstream yet, and folding laptop/tablets are practically inexistent as a category barring a few models. The ThinkPad X1 Fold hopes to pave the way to a future where such devices are much more commonplace, resulting in a robust supply chain and eventually… eventually, a lower price tag! 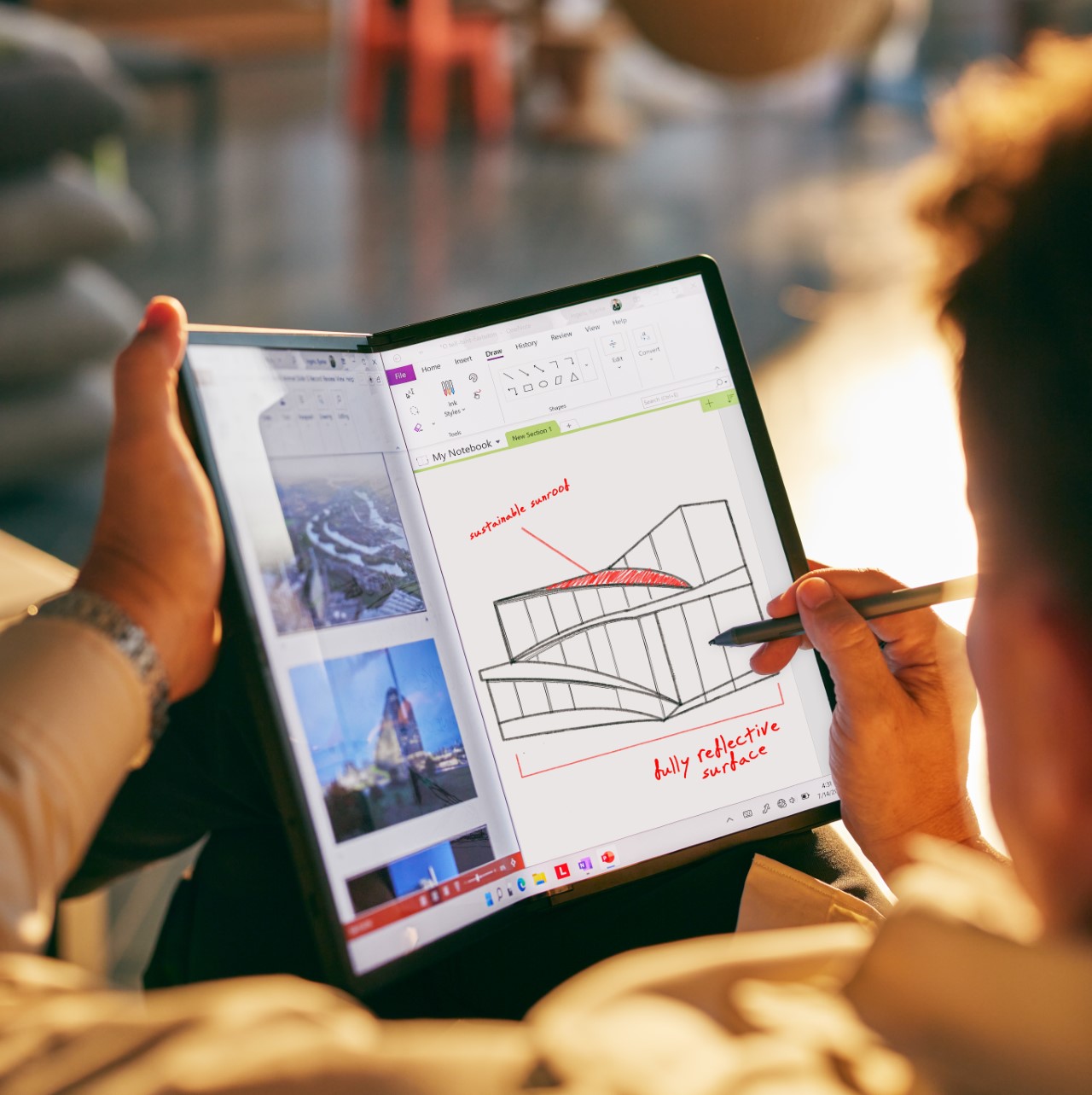 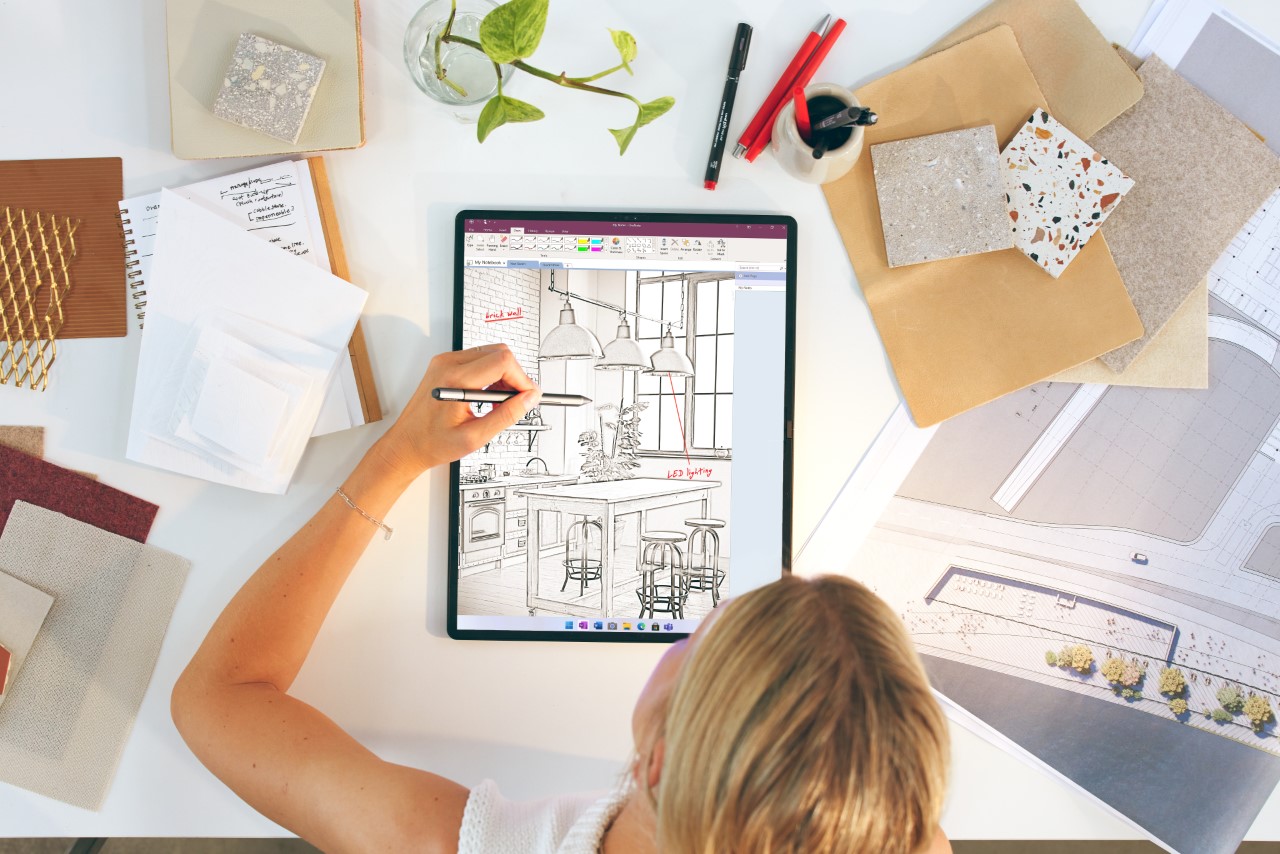 A full shower experience with 75% less water, the Altered Shower is changing how humans shower

https://www.kickstarter.com/projects/alteredshower/altered-shower-an-exceptional-shower-with-75-less-water Three years after developing the Altered:Nozzle and after saving over a billion liters of water in that time, the guys at Altered are back…

Gotta love the simplicity of this minimal desktop phone by Younghwan Kim! Designed for the OCD professional with a perfectly organized desk, the phone at…

Bring Your Drawings to Life!

Light Tales adds a whole new dimension to drawing and doodling! An immersive storytelling tool, this simplistic design encourages use of the imagination. First, kids…

People go abroad, take selfies, and come back. Then they just sit and gather likes on Facebook and Instagram. That’s not what travelling is about!…