Following the success of its previous counterparts (the SES Pro, SES, and the SES Mini), the Arrowmax team is back with the latest version of their electric screwdriver, the SES Max. With the same award-winning design but an upgraded chipset and motor that gives it higher torque and longer battery life, the SES Max is possibly the most advanced screwdriver you can own. It also now comes with 70 different bits and a MagSafe-inspired magnetic charger while retaining all of the SES Pro’s most loved features. 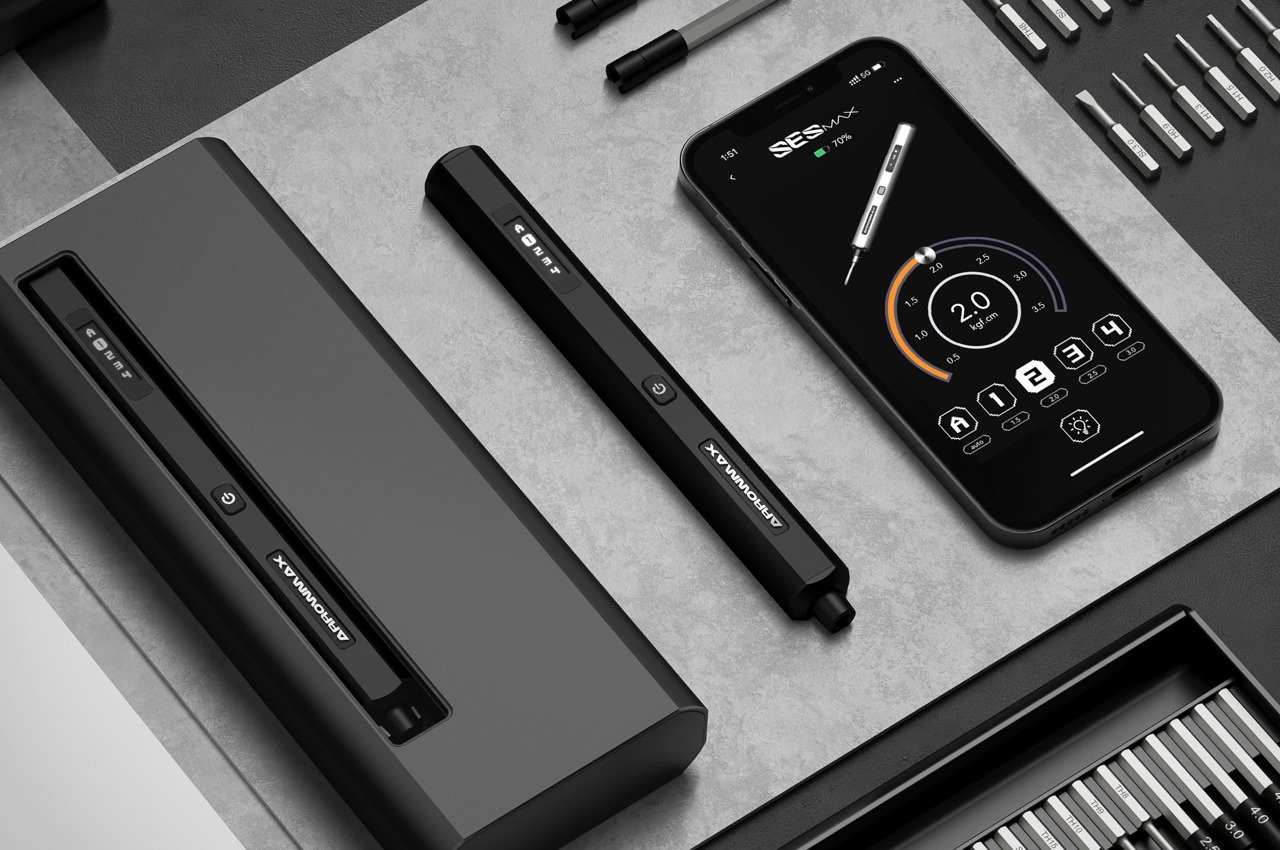 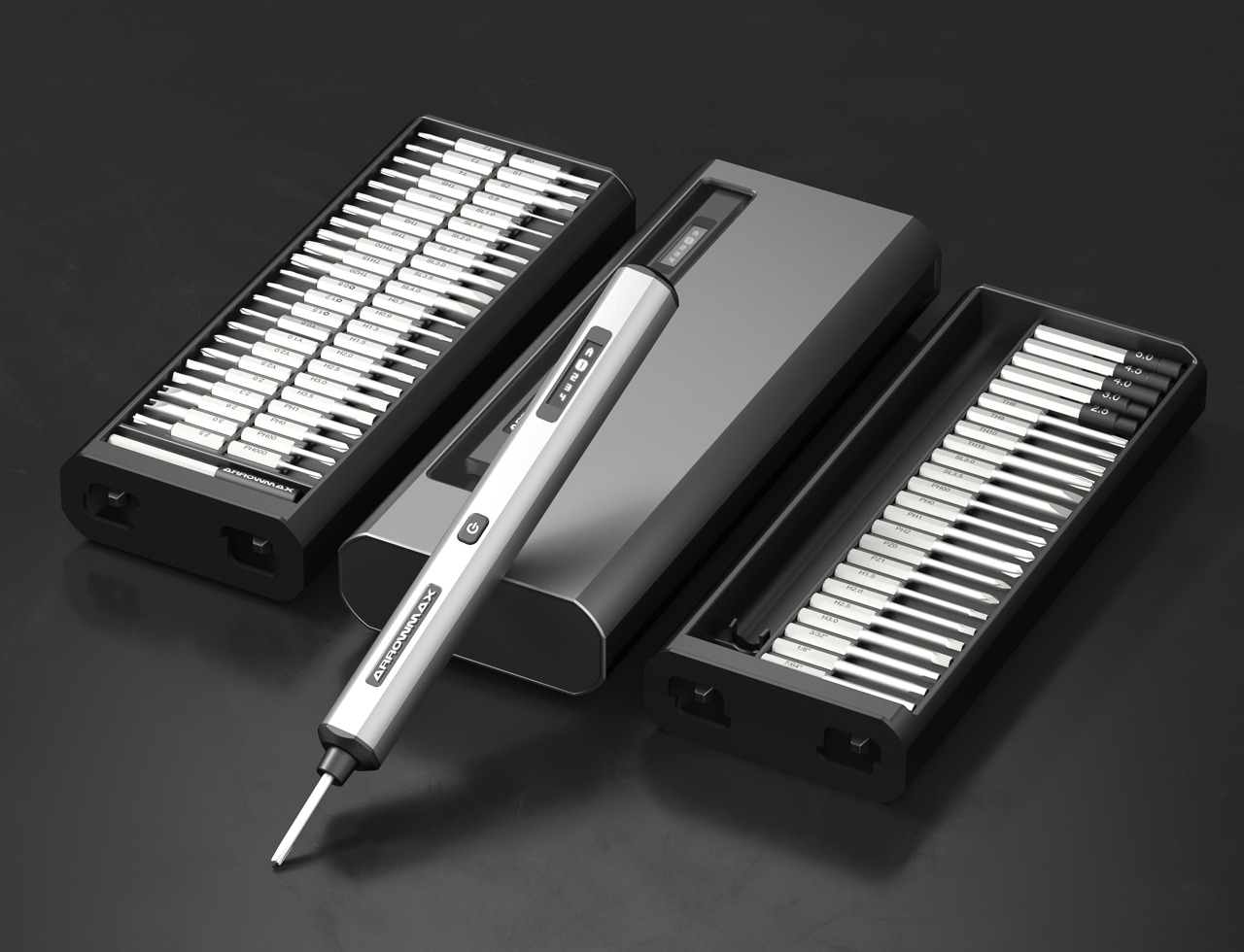 Designed to make DIY projects a whole lot easier, the SES Max is a state-of-the-art electric screwdriver that can automatically sense direction and torque so all you really need to do is hold the screwdriver while it does all the work. The SES Max sports 5 torque settings including an automatic setting where the screwdriver determines the torque requirements on its own, and has an SMC feature (smart motion control) where the screwdriver automatically picks up on which direction it needs to spin in just with a simple twist of your wrist. You can alternate between clockwise and anti-clockwise motions just by gently adjusting your wrist and the SES Max intuitively handles the rest. Just like its predecessors, the SES Max sports a screen on the side of the screwdriver body (now with a larger battery indicator), and comes with 4 shadowless lights right near the rotating bit so you can see what you’re working on in the dark too. 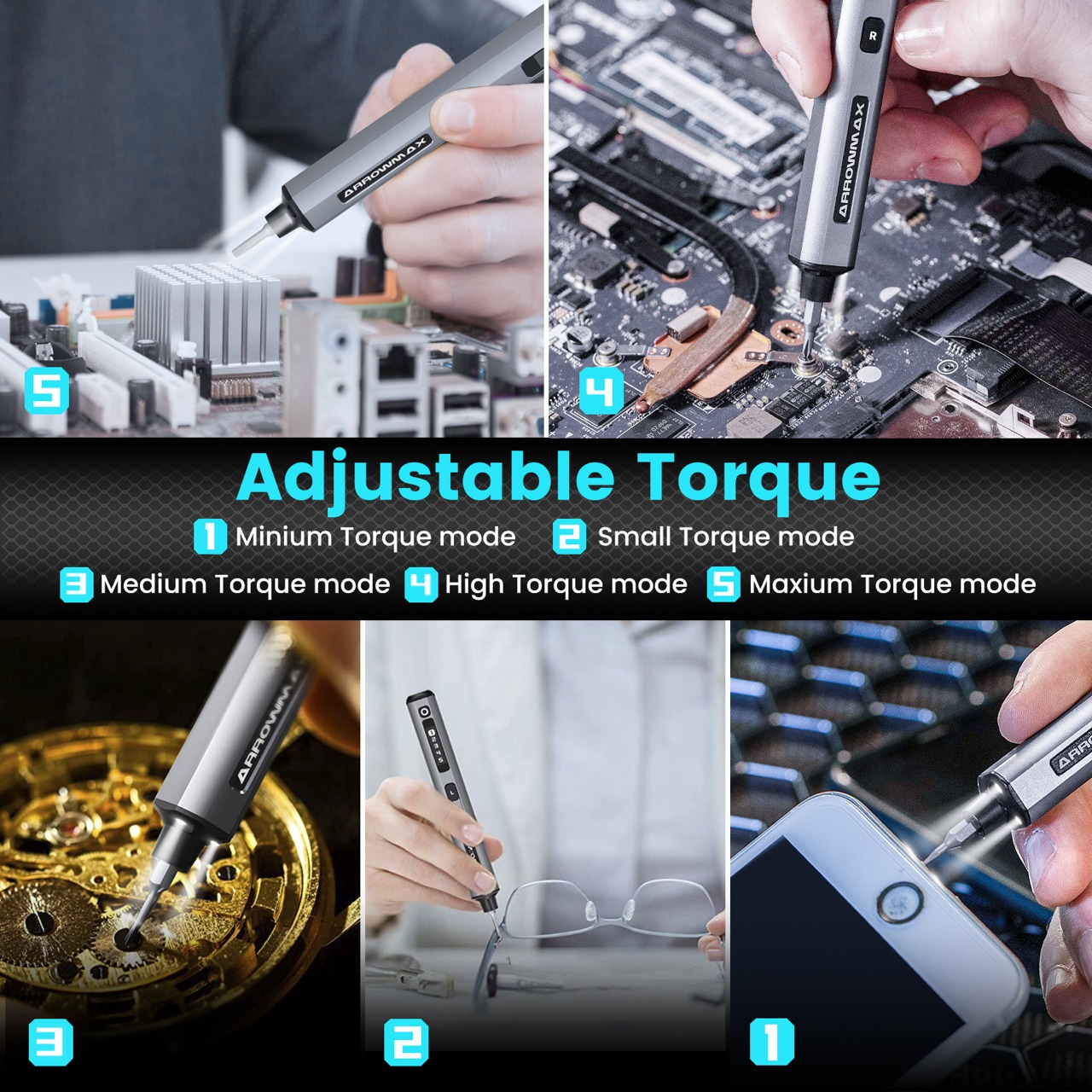 Smart Motions – The motor will automatically power the torque up to 4.0 kgf.cm (max) depending on the angle of hand rotation.

4 APP-customizable Modes – Lowest being at 1.0kgf.cm and highest at 4.0kgf.cm. 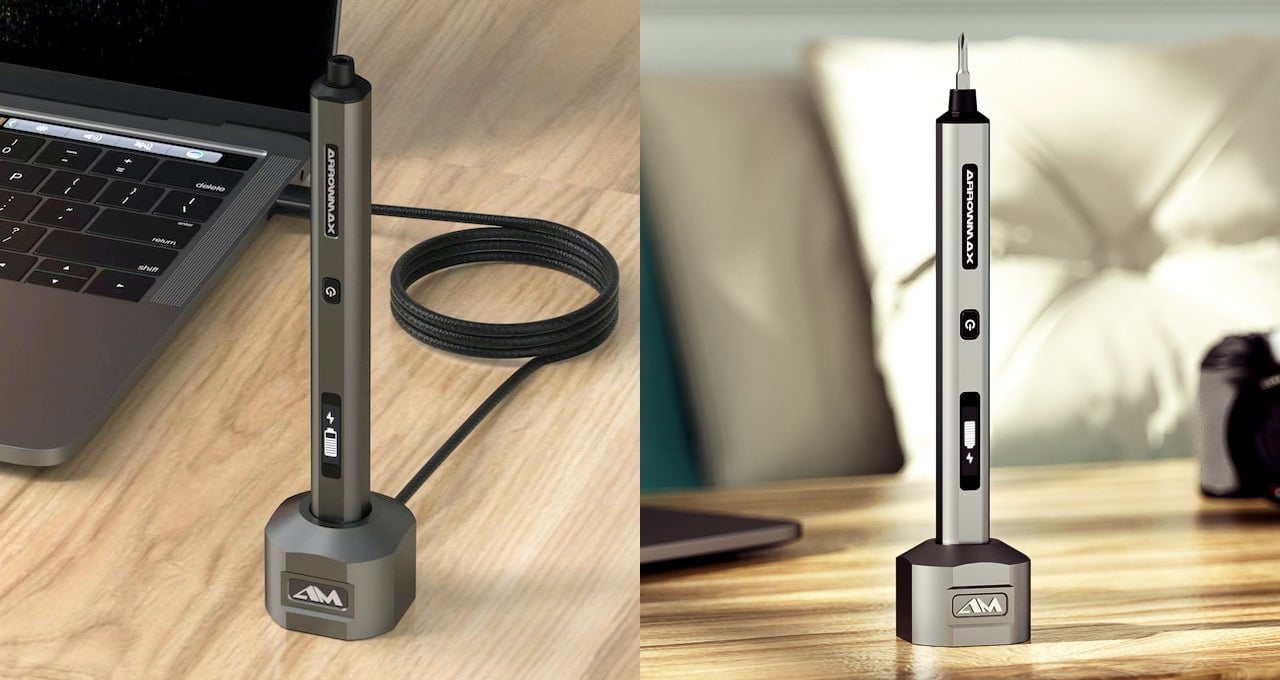 Magnetic Charging Stand – Charge it directly through magnetic, or you may choose to charge it inside the box.

While previous iterations of the SES could only go up to 2.0kgf of torque, the SES Max maxes out at 4.0kgf, doubling its predecessor. It also spins at an increased 250RPM thanks to a bigger 500mAh battery that lets you use the SES Max over 900 pieces of screws on a single full charge. The charging apparatus gets a massive upgrade too, with a proprietary magnetic charging connector that allows you to snap the charging cable onto the SES Max or have it dock in its charging station. There’s also a USB-C port on the side, just in case. 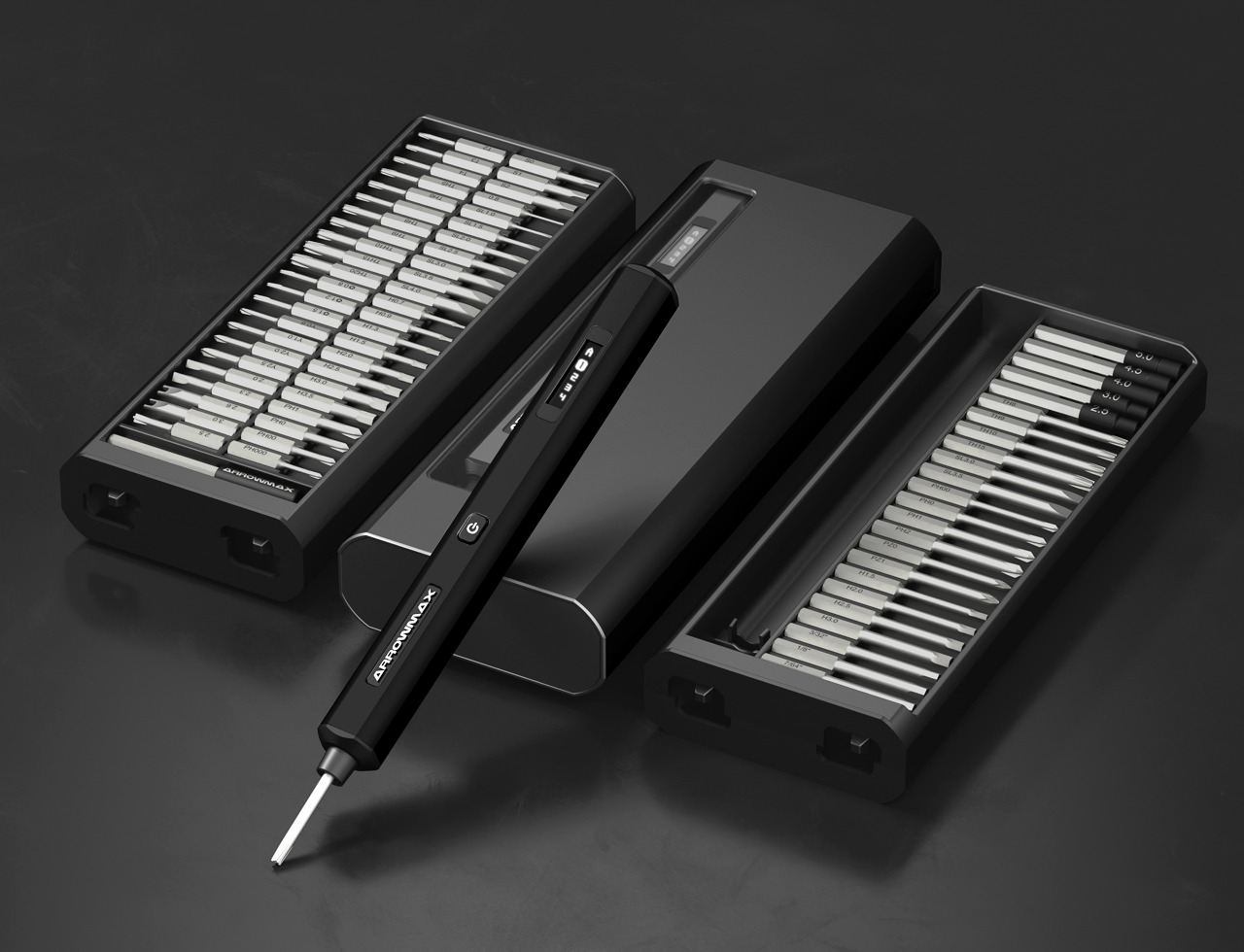 Living up to its name, the SES Max ships with 70 different bits and even one extension tip. All the bits attach to the SES Max using a magnetic system, and the Max’s case comes with a magnetizer that lets you re-magnetize bits if they ever lose their magnetic action. The SES Max is even Bluetooth-equipped and comes with an app that lets you control it via your phone (just in case that’s a feature that may appeal to you). You can get the SES Max in either anodized aluminum or matte black finishes, with the kit starting at $89. However, if you’re looking for a budget-friendly option, Arrowmax is even debuting the SES Ultra, a $59 version of the SES Max without the Bluetooth feature and the Smart Motion Control system. Instead, the SES Ultra comes with Forward and Reverse keys on its body that let you toggle clockwise and anticlockwise actions. Both the SES Ultra and the SES Max ship globally with a 1-year warranty.

Just as walking sticks went from physical aids to objets d’art, most medical/health equipment can be passed through the same filter, turning them from clinical…

If you are anything like I am, you have quite a few electronic devices that you use daily and always seem to be having to…

Similar to both kettlebells and sand weights, the Petball is a fitness accessory that transforms any standard plastic bottle into an easily customizable free weight….