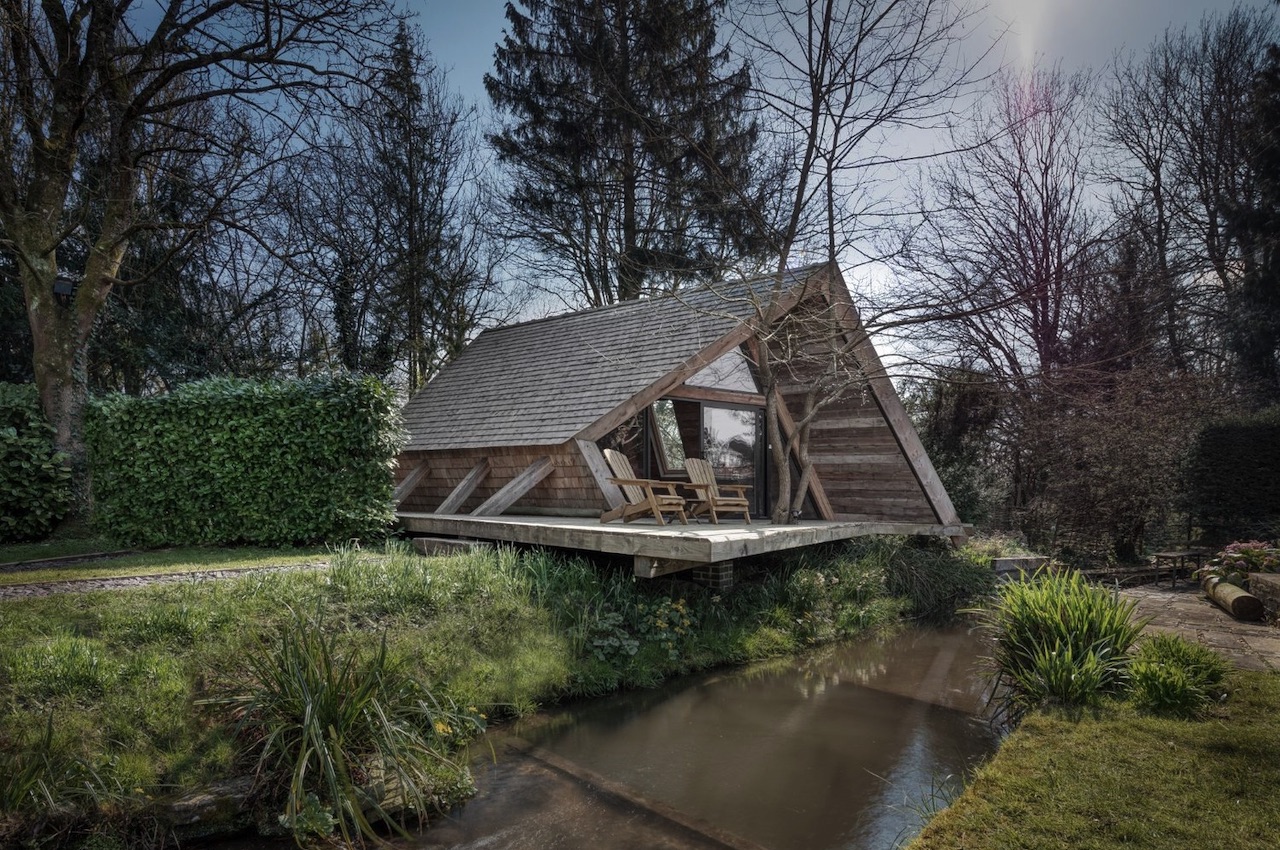 Cabin living has become attractive to many people. It’s now a popular way of living as it is more convenient now than ever.

We have seen Several interesting units, but we believe more well-designed cabins will be introduced. The latest on our radar is The Climber’s Cabin by AR Design Studio. As described, its primary purpose is as a space for children and as a guest cabin for when you want to entertain friends and family. 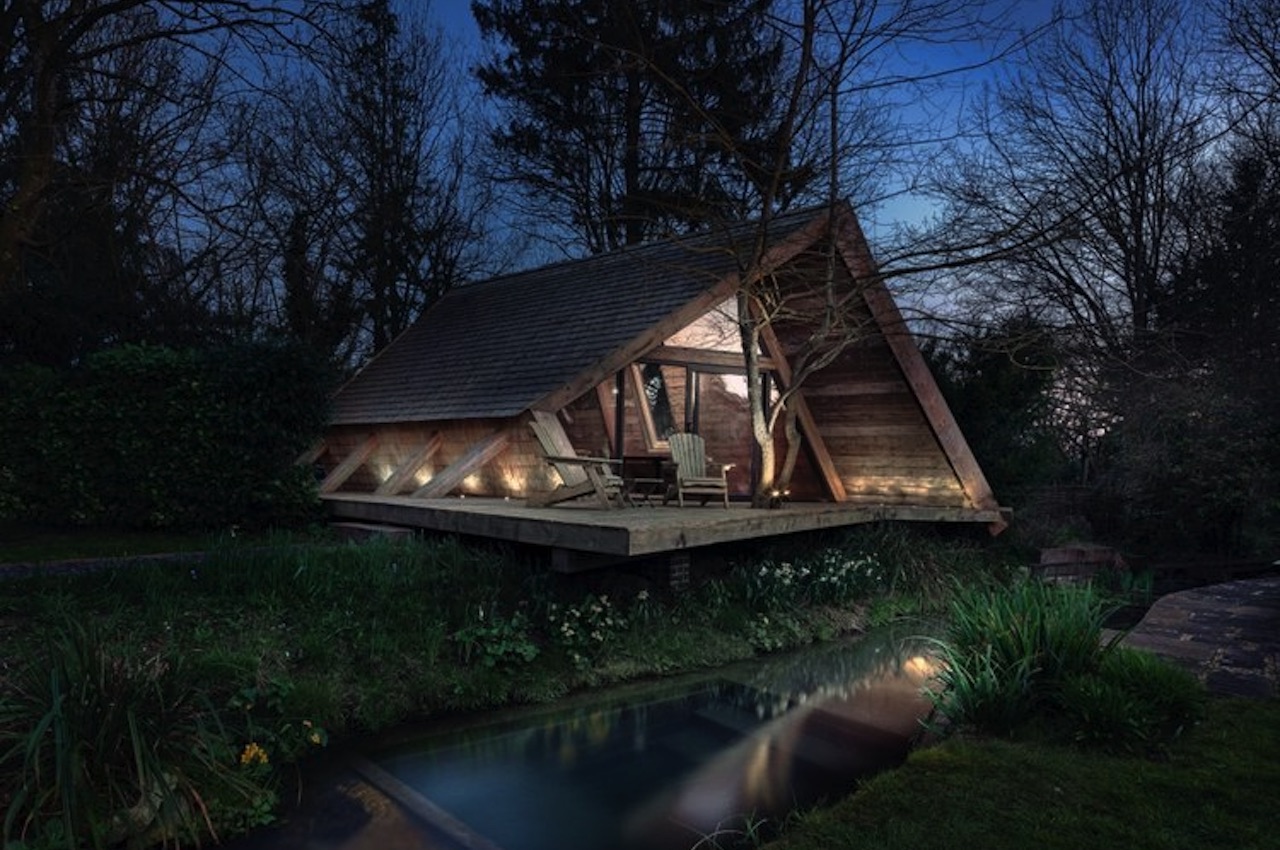 The Climber’s Cabin is situated near a stream and a woodland, adding to the adventure experience. The initial plan for the cabin was for it to function as an ancillary space for the client’s house. The idea was that the cabin would be built quickly without any complex construction methods.

Every step was supposed to be straightforward, so anyone could easily understand and follow. Construction should also be done using sustainable materials sourced locally. The project was actually born during those early months of lockdowns due to the pandemic.

While the pandemic isn’t over yet, this design of The Climber’s Cabin can also be applied to other projects. The cabin is also 25sqm, but it can accommodate up to four people. What started as a 6×4 meter box has been maximized for a bigger floor area. In addition, the A-shaped roof was optimized to allow a mezzanine. This means additional space for guests to move around. 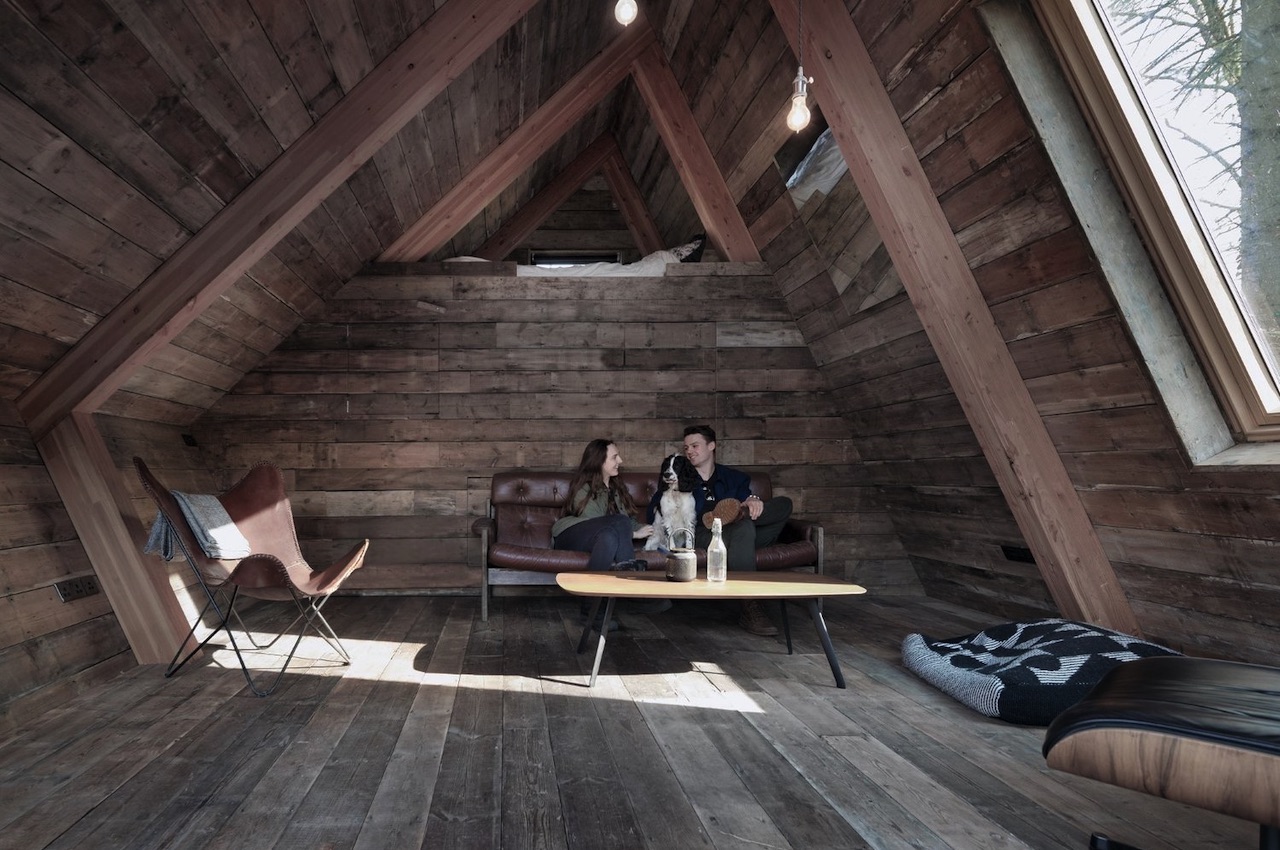 The cabin comes with a large picture window in front. At the back, there are smaller windows offering framed views. From the sleeping area, you have a nice view of the woodland. One side of the cabin is longer to make way for storage. One side now offered cover for the late evening sun. This side also now serves as a sheltered terrace. For warmer nights, there is a large terrace that can be used.

Inside The Climber’s Cabin, interior finishes are made of used and upcycled boards. Meanwhile, the exterior of the cabin is made of cedar shingles. There is a thick layer between the outside and the inside for insulation. This allows minimal heating during the colder season. This also means less consumption and better energy efficiency. 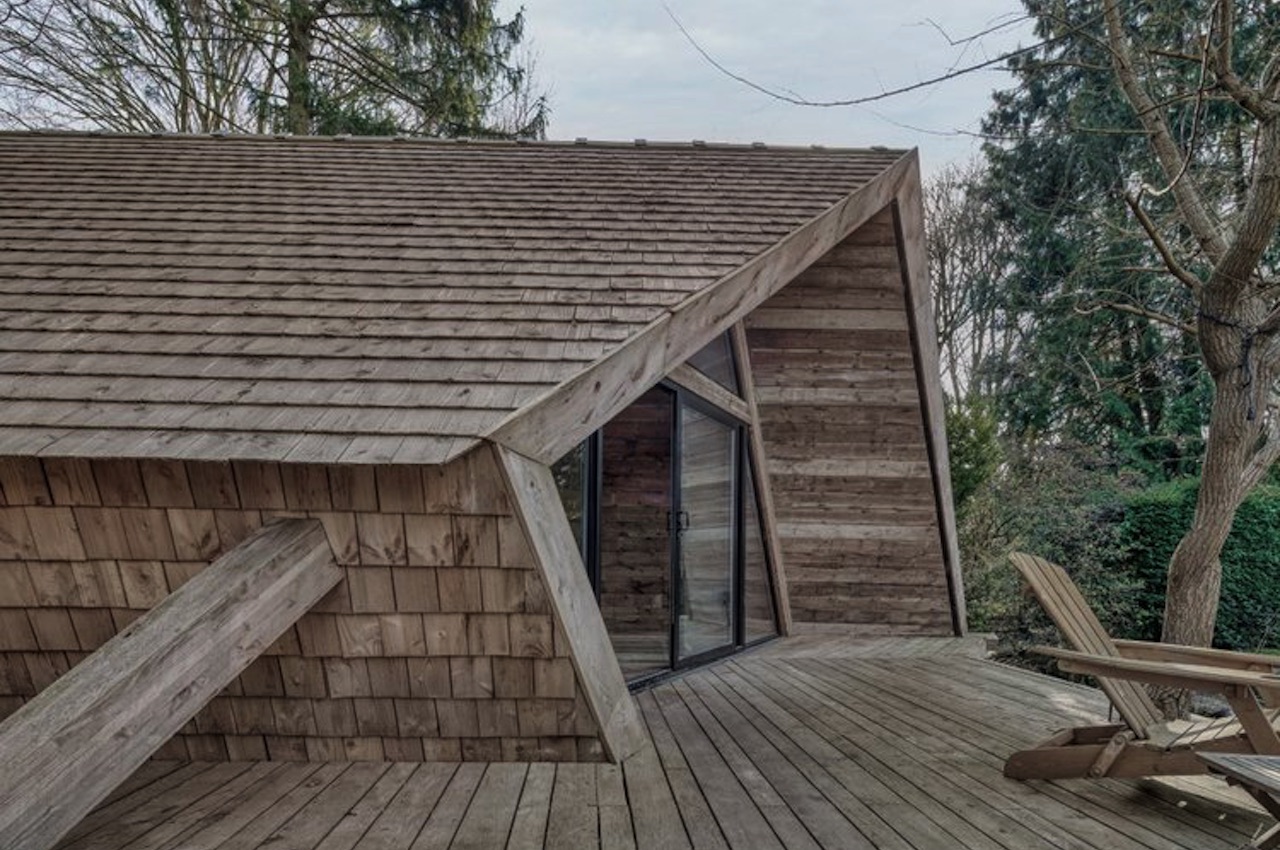 The main construction of the cabin is placed around four pre-fabricated A-Frame trusses. The structure of this cabin may be likened to those of barns. Mainly, the cabin sits on top of brick piers and pad foundations. 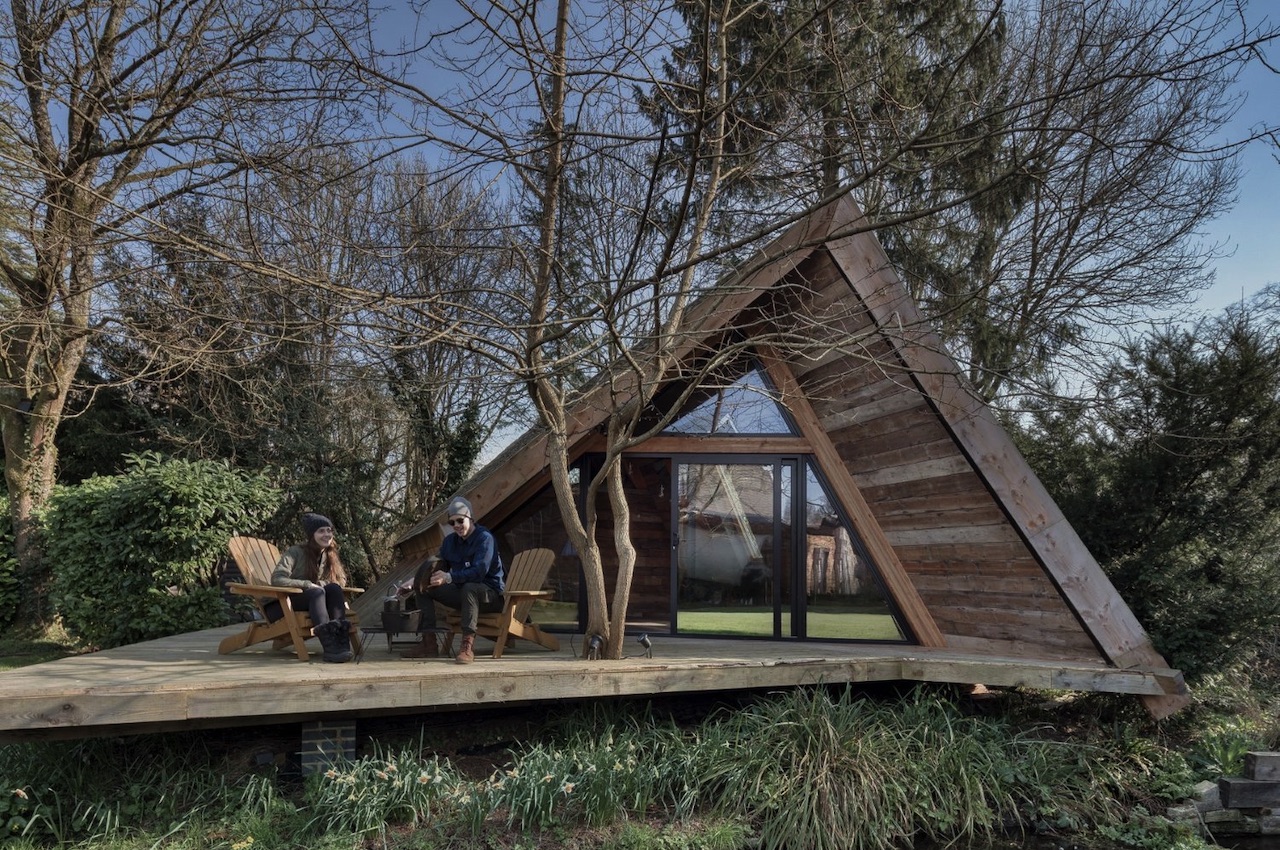 The cabin’s look matches the surroundings, but the tiny house stands out. It offers a warm and cozy feeling for the guests, offering a more natural environment that is safe, quiet, and sustainable. It’s something you can escape to at the end of each day. Now, who wouldn’t want to live in this little cabin? 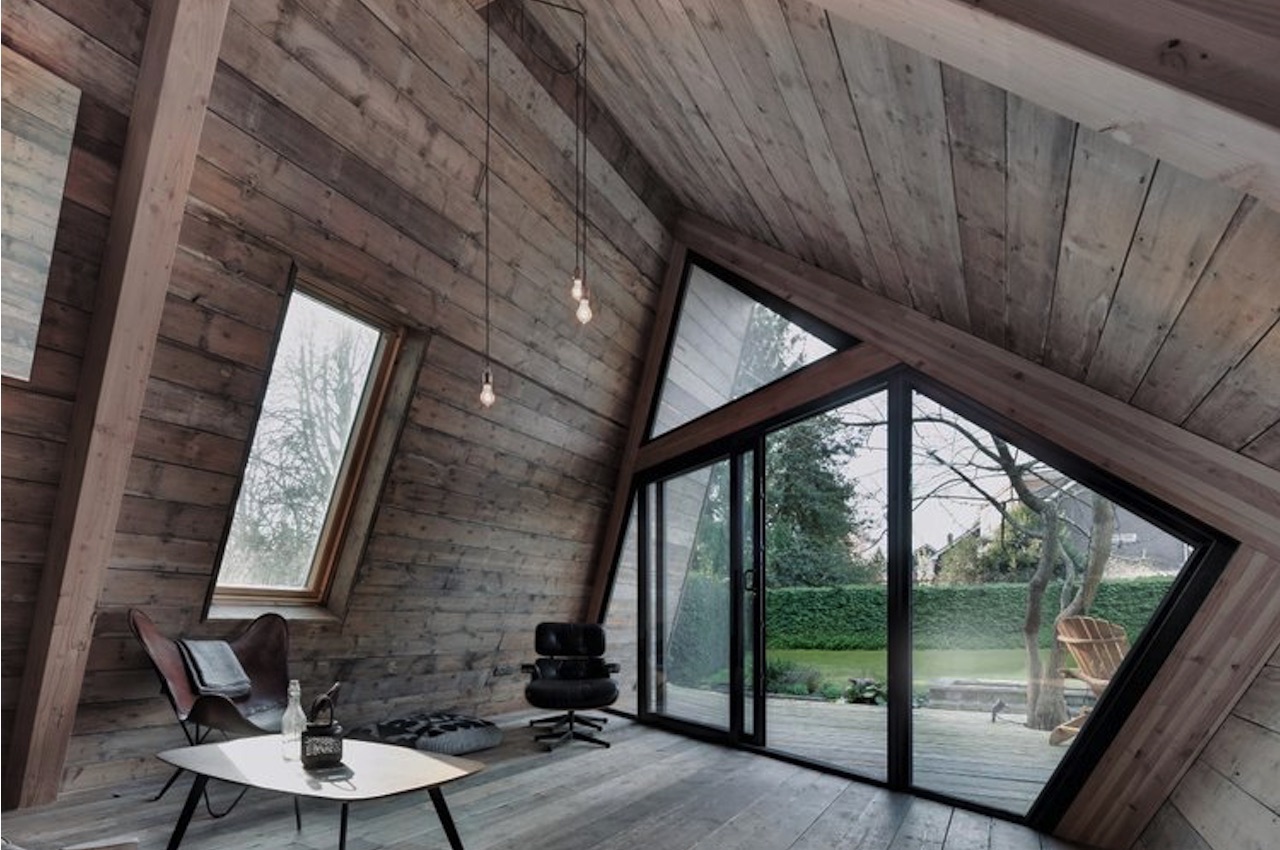 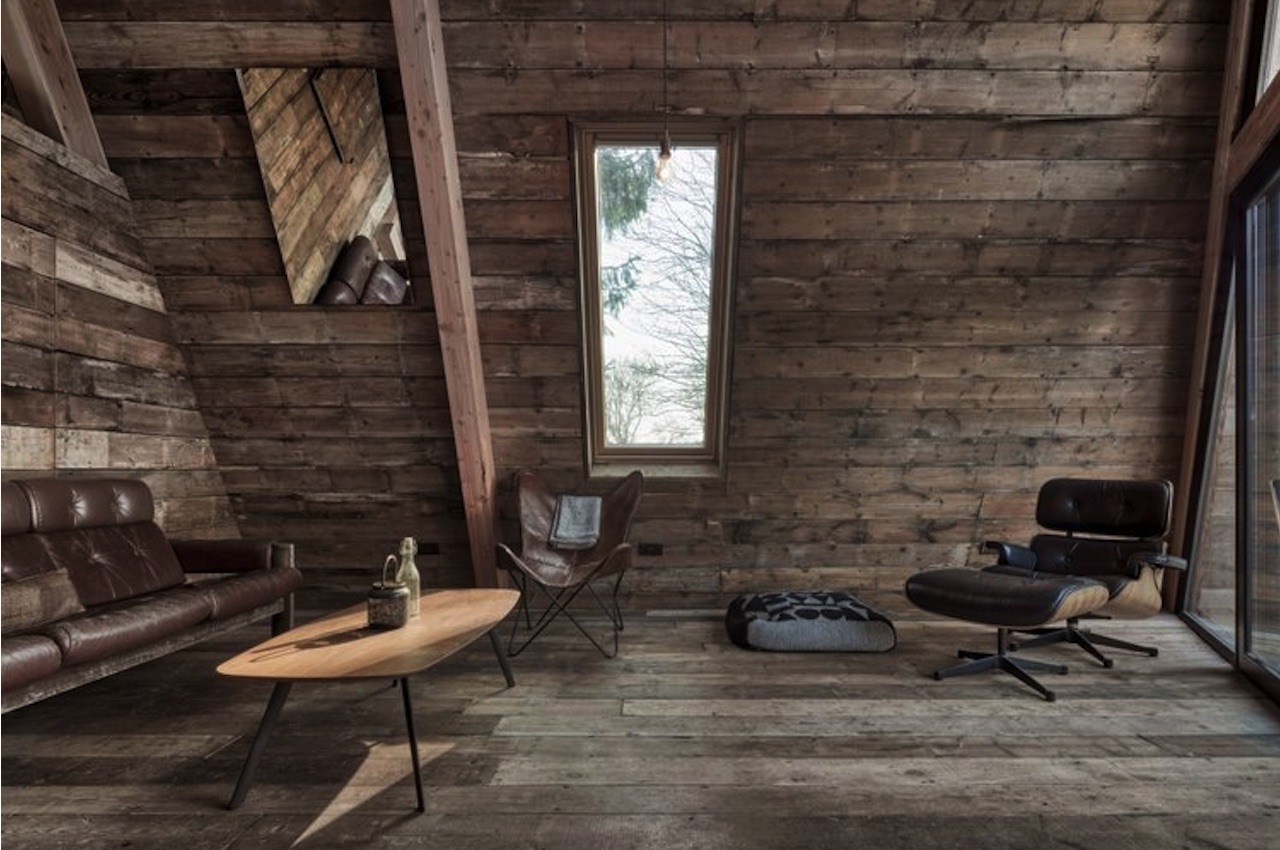 The Best Brick for the Job

This right here is a cellular phone that will last you five years. After that, it’s just a twist and about a minute of dissembling…

These colourful chairs and screens were surplus parachutes once upon a time!

Today designers leave no material untouched in their attempt to create the most unique and innovative designs. Whether it’s recycled metals, cork, coconut fibers, you…

Enchanting Hotel Designs you want to chart your travel plans around

Hotels have often been the means to an end, a place to stash your luggage and crash through the night while you explore the vibrant…

Cabin Designscabin in the woods