I don’t believe that adding the word ‘smart’ in front of anything actually makes it a better product; on the contrary, in fact… but this smart chopping board is making me figuratively eat my own words.

The key to making a product smart is to figure out how technology can enhance its core abilities. To that very end, a smart refrigerator that connects to your social media may be a terrible idea… but something like the 4T7 Smart Chopping Board actually makes a world of sense. With functions and features that make meal prep much easier and more streamlined, the 4T7 Smart Chopping Board helps with every stage of meal prep, and then some more. 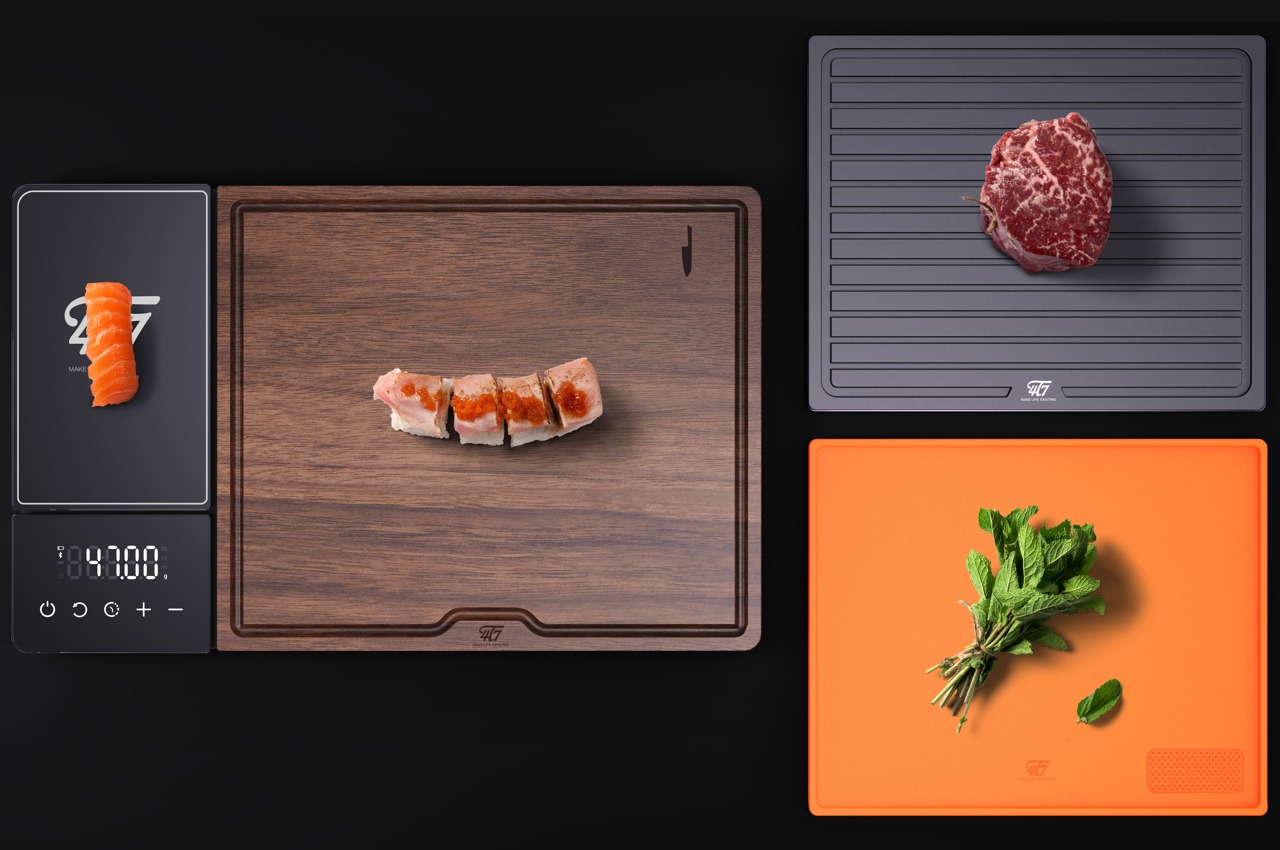 4T7 breaks meal prep into its different components, adding good design and tech wherever necessary. The board comes with 4 distinct parts, a main bamboo chopping board, a secondary silver-ion anti-bacterial board for veggies to prevent cross-contamination, a third heat-conducting defrosting tray that helps rapidly thaw frozen foods, and lastly, the 4T7’s base, which has its own built-in weighing scale. The only part of the 4T7 experience to exist outside the actual board is its smartphone app, which counts calories as you weigh your ingredients. Once your prep-work is done, the digital display on the 4T7 can also function as a kitchen timer, while the board itself becomes a magnetic knife-holder. 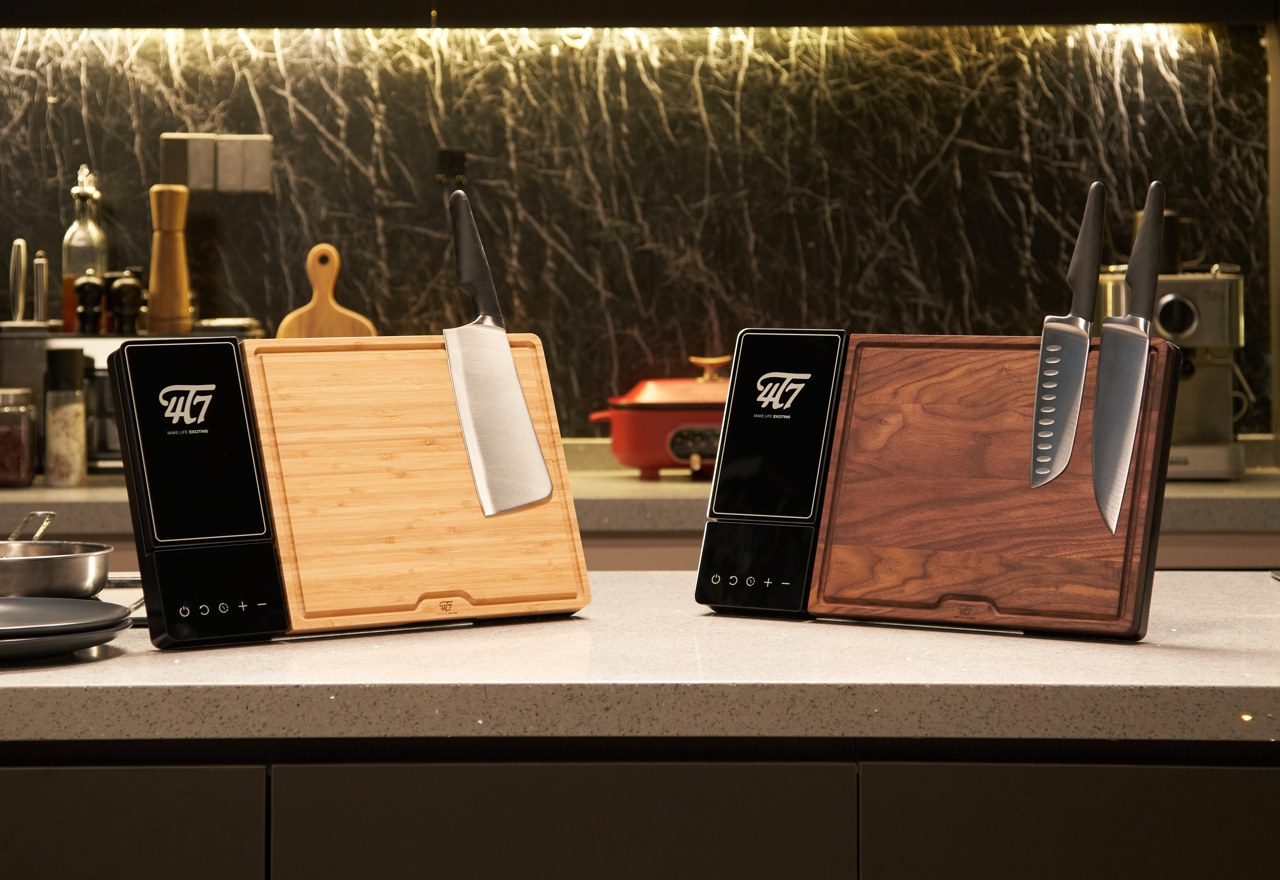 All of 4T7’s components are designed to be wonderfully functional as independent items, but when they come together, the experience is greater than the sum of its parts. 4T7’s highlight, its chopping board, is available in either bamboo or walnut, both with waterproof and mold-proof finishes on their surface, and strong magnets in their top right corner that can hold your knife when you aren’t slicing, dicing, and mincing. The board works equally well for fruits/veggies as well as for meats, although if you’re working with both veggies and meats, a secondary board lets you divide your foods by category to prevent cross-contamination, while the primary board lets you prepare your meat, with a channel running along the periphery of the board to gather blood/juices.

4T7’s second board gives you a perfect surface for chopping veggies. Its silver-ion-coated surface is naturally anti-bacterial, and the board even sports a textured patch on its bottom-right corner that serves as an integrated spice grinder, letting you grate garlic, mash coriander, or grind some thyme without needing to bust out any extra tools.

The digital scale and timer are built with tempered waterproof glass that comes clean with a wipe. 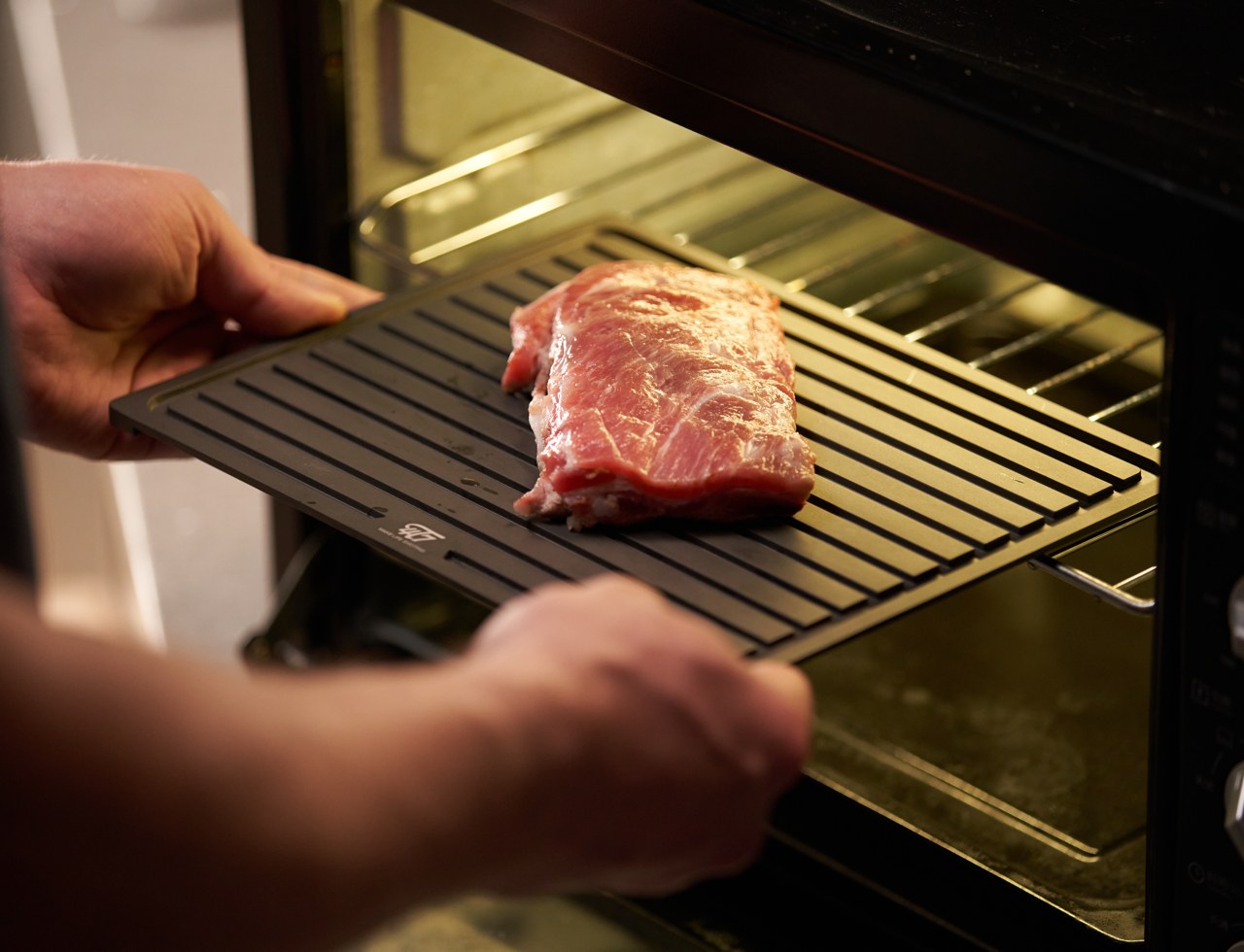 The defrosting board simultaneously ensures your frozen food thaws quickly, bringing it rapidly up to room temperature so you can work with it. Made from a ‘special thermal material’, the tray comes with channels running through it that boost airflow and allow your meat to cool up to 6 times faster than it would just while sitting outside at room temperature. The channels also end up collecting water from the ice that melts, so your kitchen counter doesn’t have a pool of water all over it as you’re preparing for a meal. The defrosting tray even doubles as a baking pan, and can directly be put in the oven. Given how well it conducts thermal energy, the pan works wonderfully well at distributing heat evenly to cook your food to perfection.

The 47T’s piece-de-resistance, however, remains its ‘smart’ weighing scale, which also ties in with a companion smartphone app that lets you count calories for your food as you go. The weighing scale comes with a digital seven-segment display at the bottom, giving you the ability to weigh in grams as well as pounds, ounces, and even milliliters. The scale has an accuracy of 0.1 gram and can weigh up to 3 kilograms at a time.

Once you’re done prepping and ready to start cooking, the 4T7’s digital display can be configured to work as a kitchen timer too, with the ability to count down from a maximum of 99 minutes and 59 seconds. 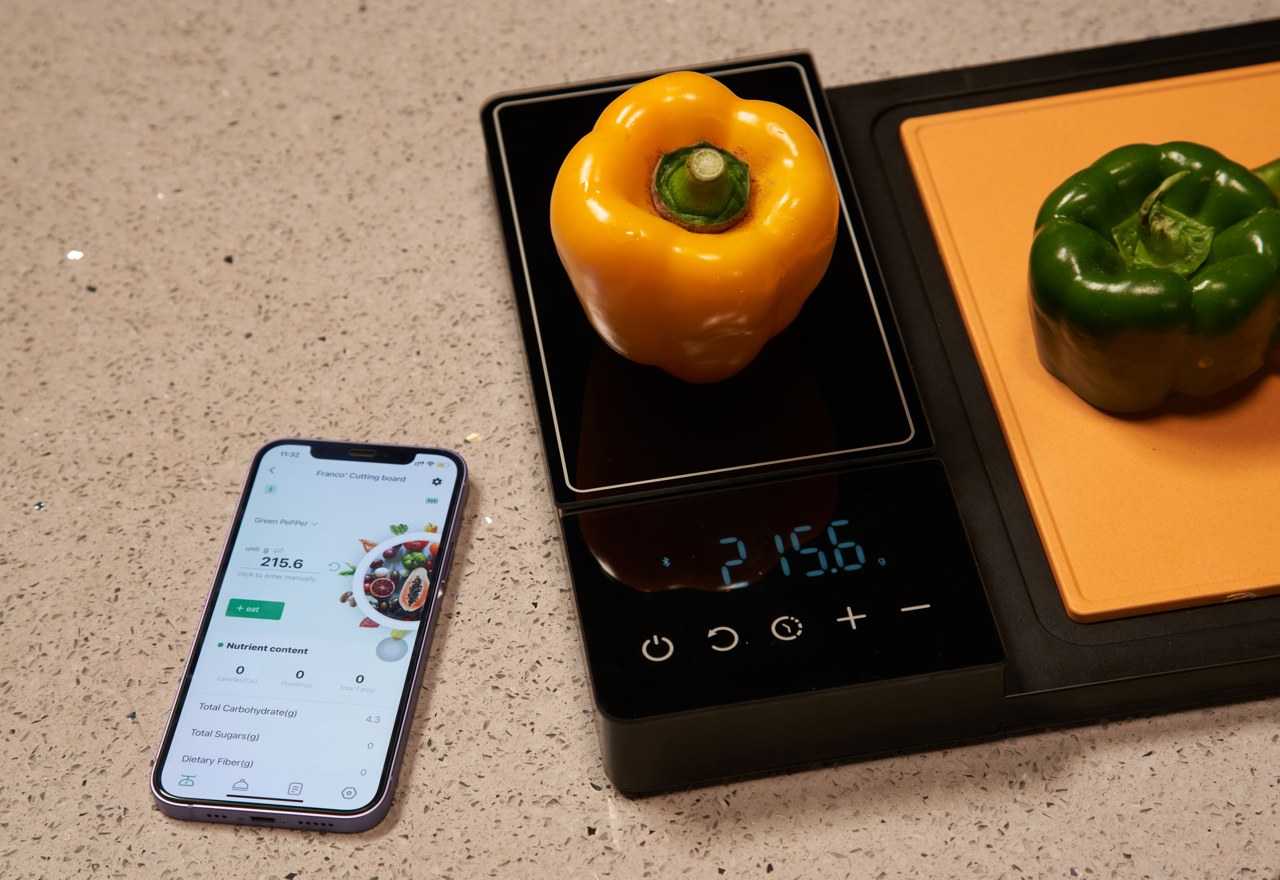 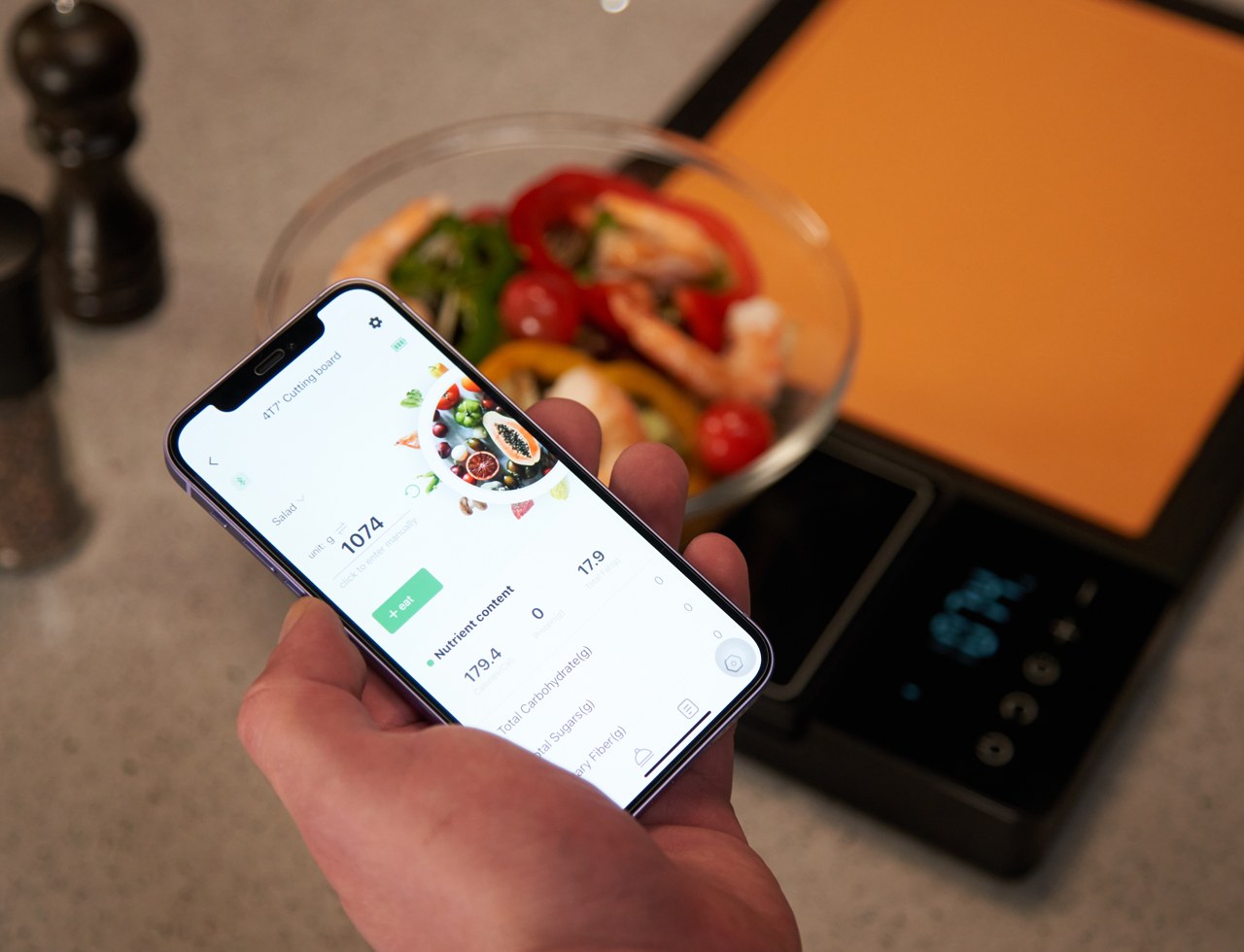 4T7’s Kitchen Scale App is what puts the Smart in the Smart Cutting Board. Aside from simply prepping and weighing your ingredients, the app extends the board’s functionality by giving you a deeper dive into the food you eat. Based on your recipe, its ingredients, and their proportions, the Kitchen Scale App can give you a caloric breakdown of your meals, offering unique insights to people who want to watch what (and how much) they eat. The app also lets you explore recipe ideas, share advice, and support people on their meal-prep journey, creating a ‘metaverse for meals’ where people come together as a cooking community. The app also allows users to submit their recipes and photos, creating an ever-growing ecosystem of cuisines that anyone can access and add to.

What the 4T7 Smart Cutting Board cleverly does is take into account the entire cooking process. Rather than just being a simple cutting board, 4T7 becomes the epicenter of your meal prep, letting you cut, measure, weigh, grind, and defrost, while also timing your cook and holding your knife while you’re done. The entire 7-in-1 contraption measures 17.3 inches wide and 11.2 inches long, and allows you to nest all the 3 boards one under another to keep everything compact.

If you’re further pressed for space, the 4T7 has its own built-in backplate that lets you prop it up at an angle – a feature that makes the magnetic knife holder even more impressive.

Each 4T7 is designed to be a rugged affair, dealing with the fast-paced cooking environment. The boards are naturally waterproof and mold-proof, while the base itself is immune to splashes of water, sauce, or oil – something that’s pretty standard in most home kitchens. The 4T7’s digital scale and timer run on 4 AAA batteries, so that’s one less charging cable to worry about in the kitchen, and it connects to the smartphone app via Bluetooth 4.0. For now, the app is entirely free to use, and offers English and Chinese support. The 4T7, which is available for a limited super early bird price of $89, starts shipping in May and comes with a 1-year warranty.

The incredibly beautiful Icarus OLED Lights look ready to illuminate any dark spots in your life. Captivating and innovative, the lights seem to have a…

Looks like the Apple Card has a strong, encrypted rival! Samsung is hoping to revolutionize the payments space with its Biometric Card which has a…