We’ve seen a few desks and tables with hidden features, but this DIY project takes the cake when it comes to revealing something that you least expect from a side table.

Side tables may have started out as simple, functional pieces of furniture, but they quickly turned into decorative assets in any room. Of course, these smaller tables went through their own minimalism phase before they started to become more multi-functional and expressive. Some side tables still retain their clean forms, using ingenious tricks to hide additional functions until they’re needed. To be fair, this table doesn’t exactly offer any additional useful functionality, but no one will be able to deny how amazing it is to see it transform from useful furniture to intricate movie reference. It’s even more amazing when you find out just how much work was needed to make this seemingly magical dual-purpose table to life. 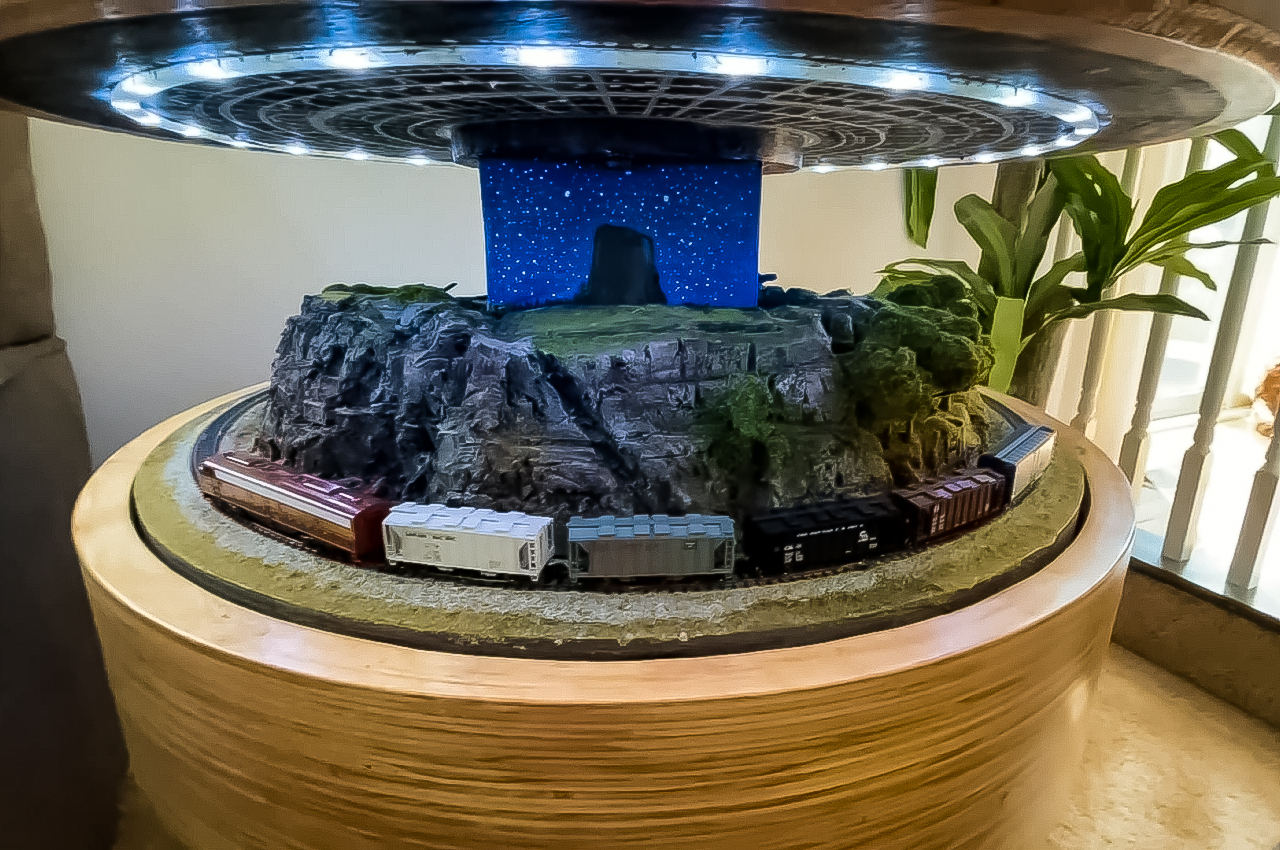 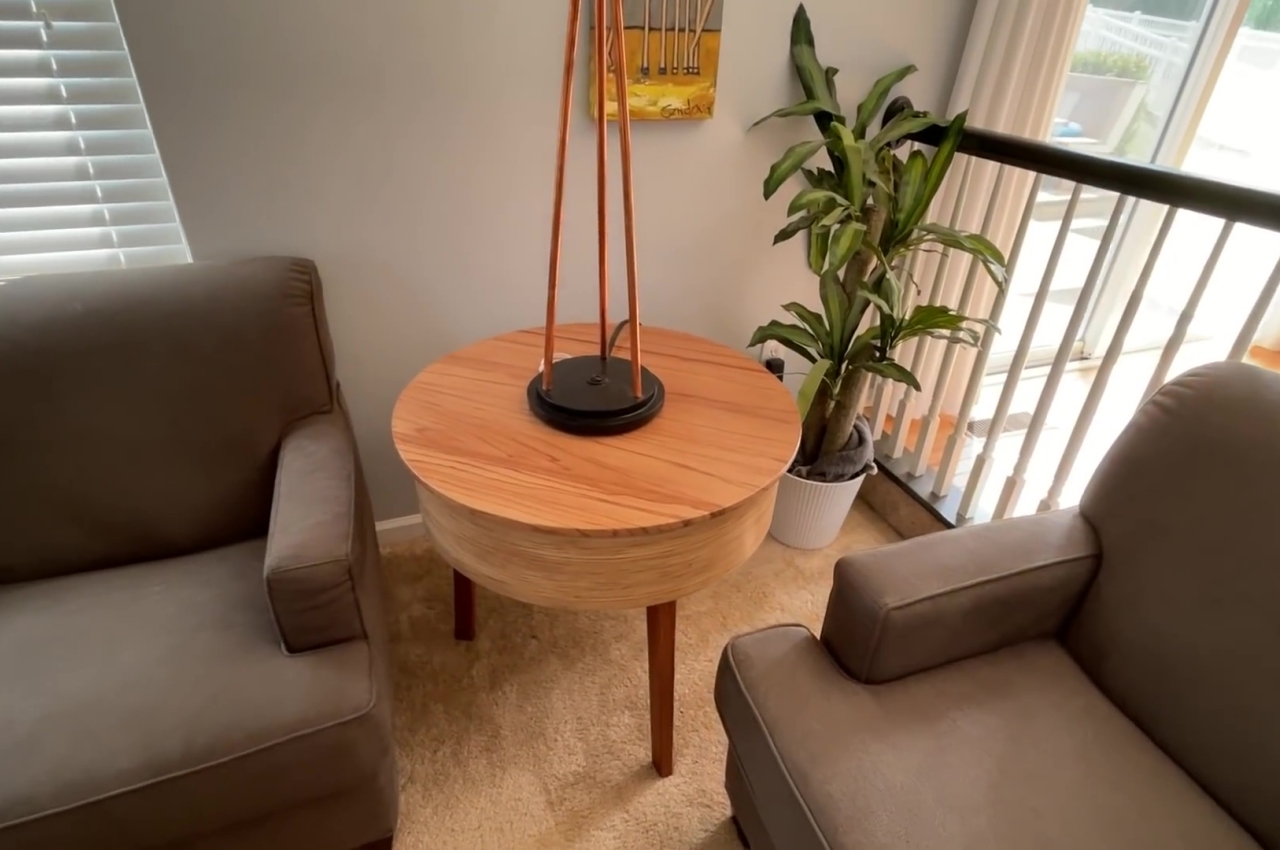 We’ve seen our fair share of DIY projects utilizing wood, electronics, or artistic skills, but very few actually required intensive applications of all those. In some cases, much of the work is done by a 3D printer, sometimes even outsourced to a 3D printing service, and some of the woodwork involved in other projects were pretty minimal. In contrast, you can’t help but be awestruck by this particular maker’s persistence and skill in shoving a miniature movie set into a deceptively simple wooden table. 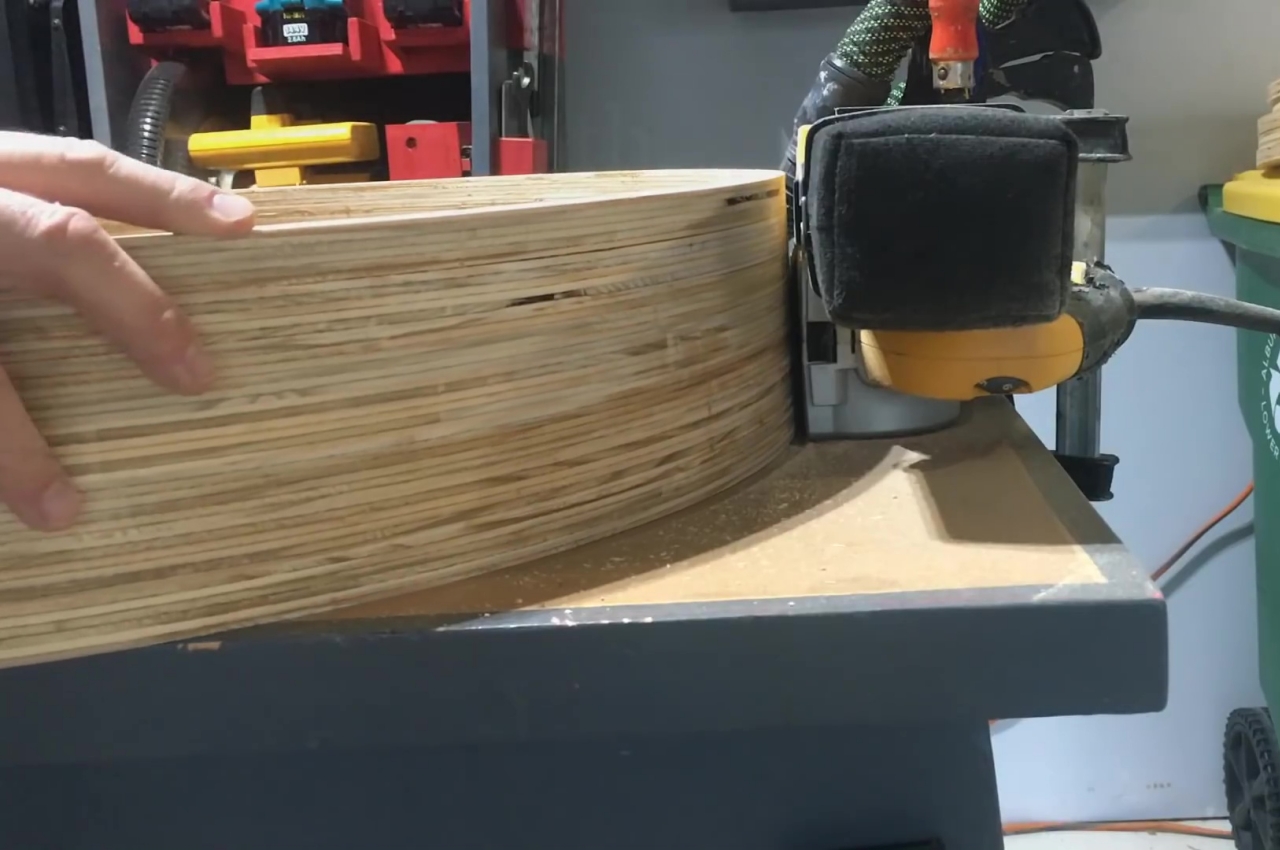 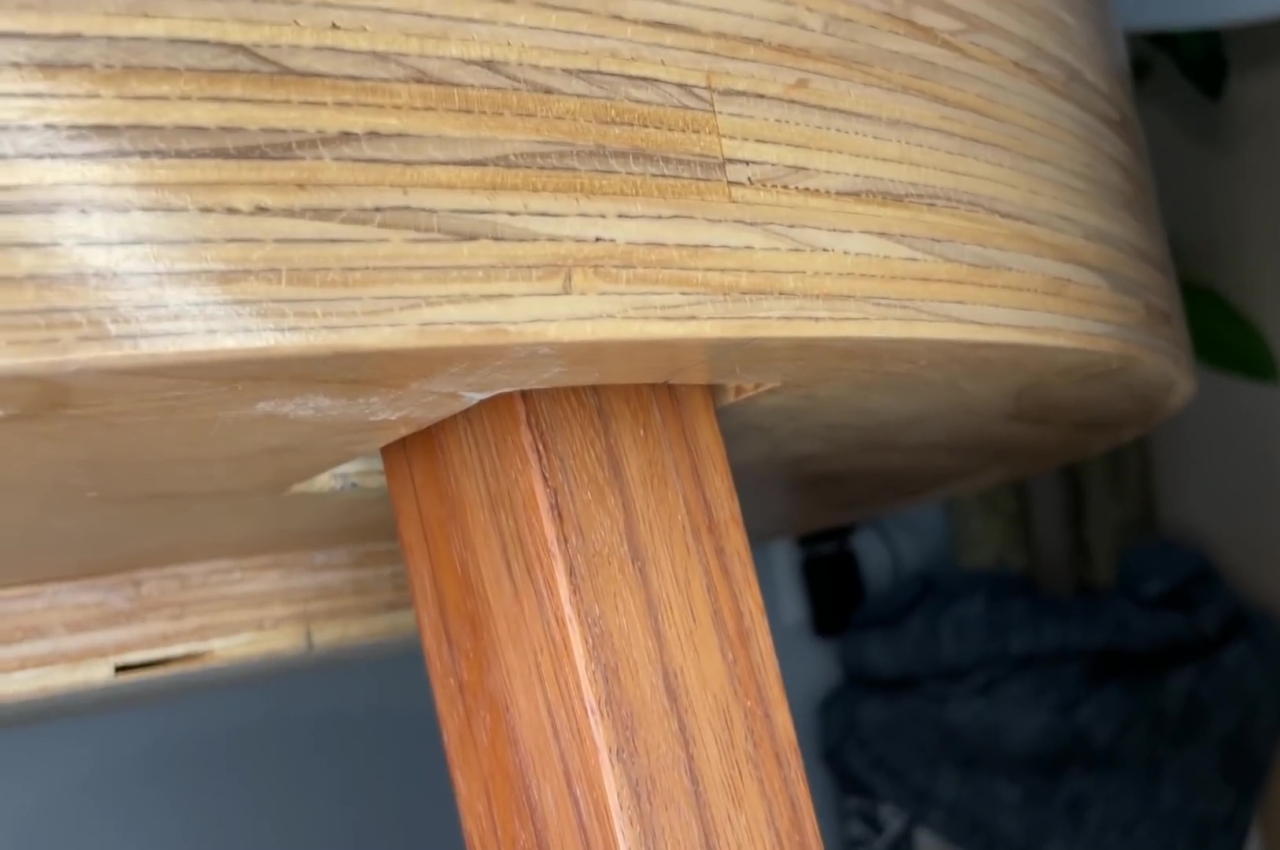 The creator, for example, had to cut no less than 16 wooden rings that were glued together to create the hidden compartment for the model train set. A system of hidden pulleys had to be designed to raise and lower the platform, transforming the table into a moving diorama. Pieces of foam had to be cut, assembled, and painted to create the mountain centerpiece that would serve as the backdrop of the set. That’s also not mentioning yet the tricky wiring and electronics involved, especially to make the moving train trigger railroad bells as if by magic. 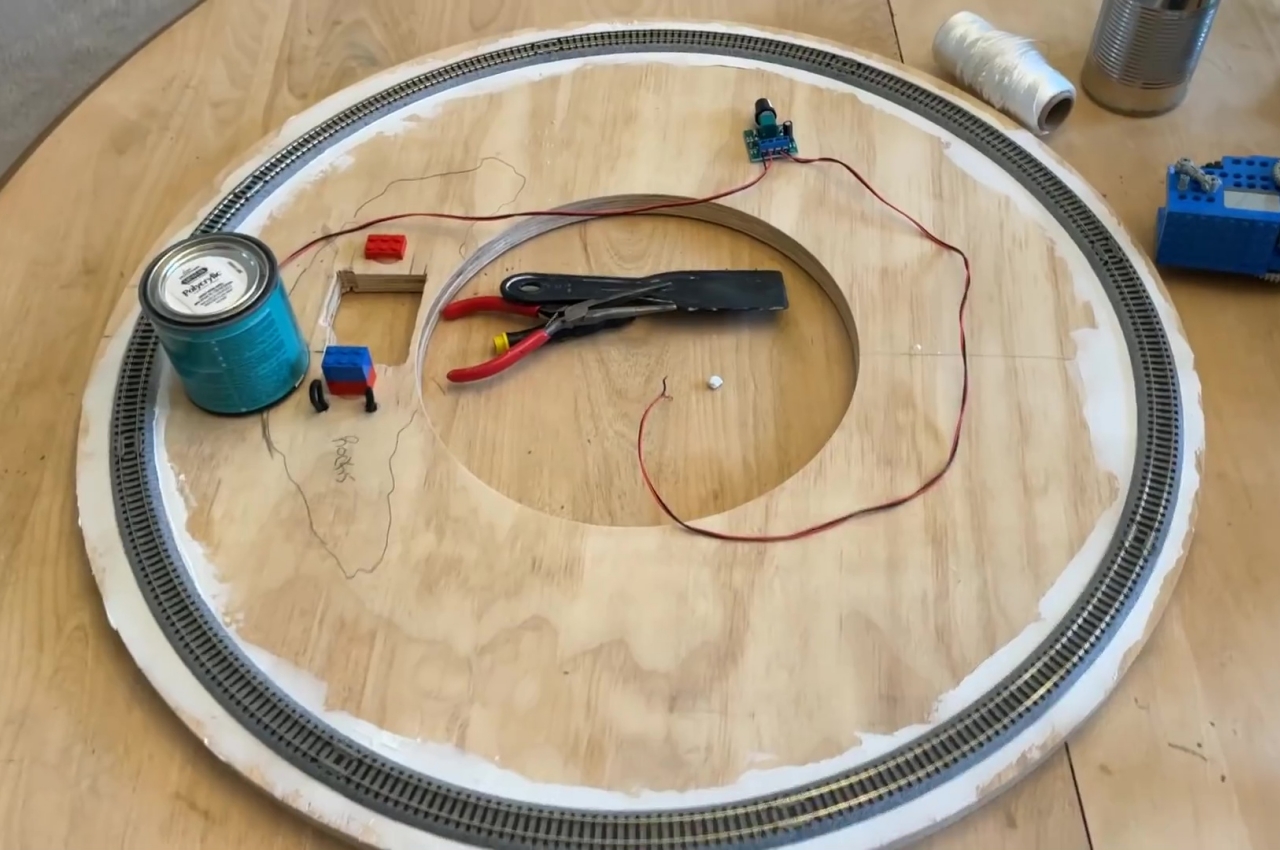 The mini train set tries to recreate an iconic scene from the film “Close Encounters of the Third Kind,” and it ingeniously uses the underside of the table’s elevated wooden top to play the role of a UFO. LED lights not only give it an otherworldly appearance, it also illuminates the train to make it look more visible. The effect is best observed at night, of course, but the mini train table is mesmerizing any time of the day. 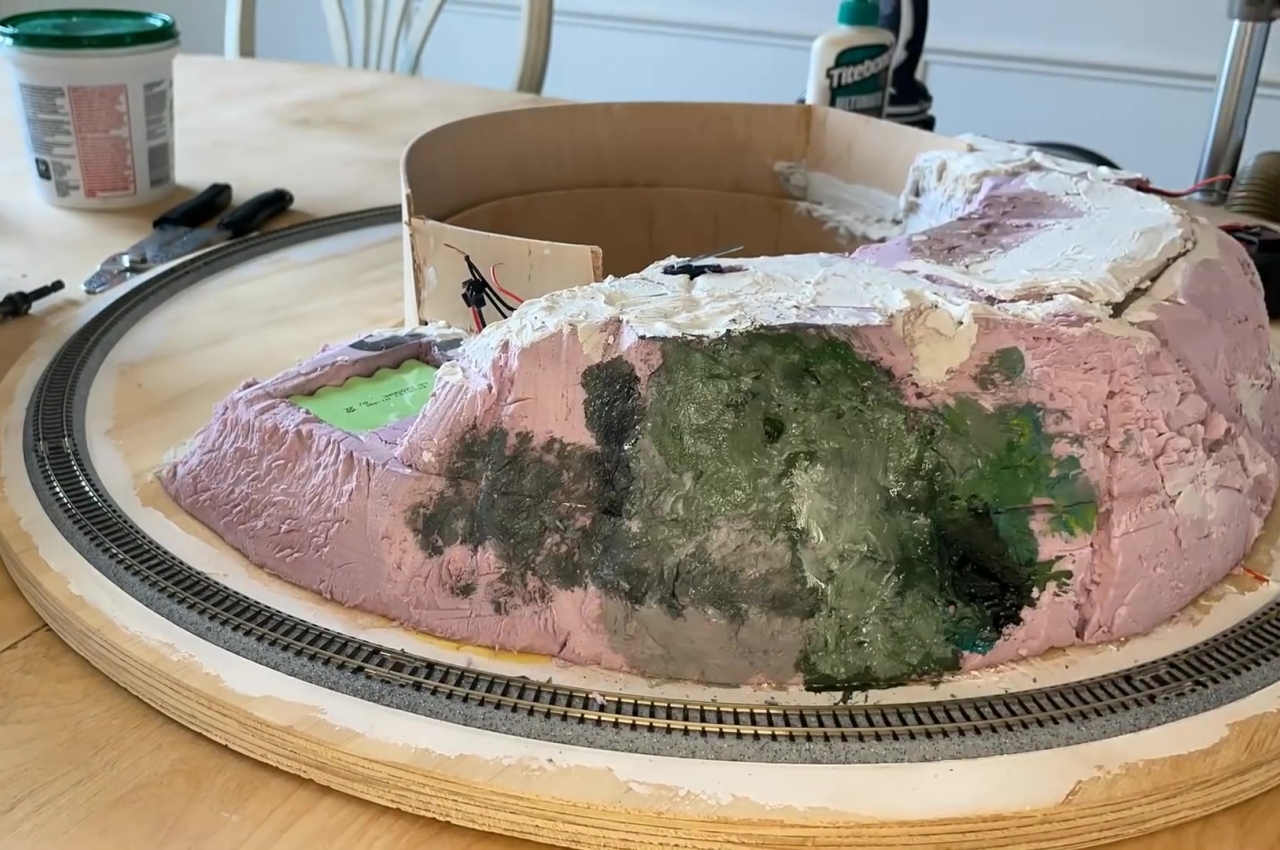 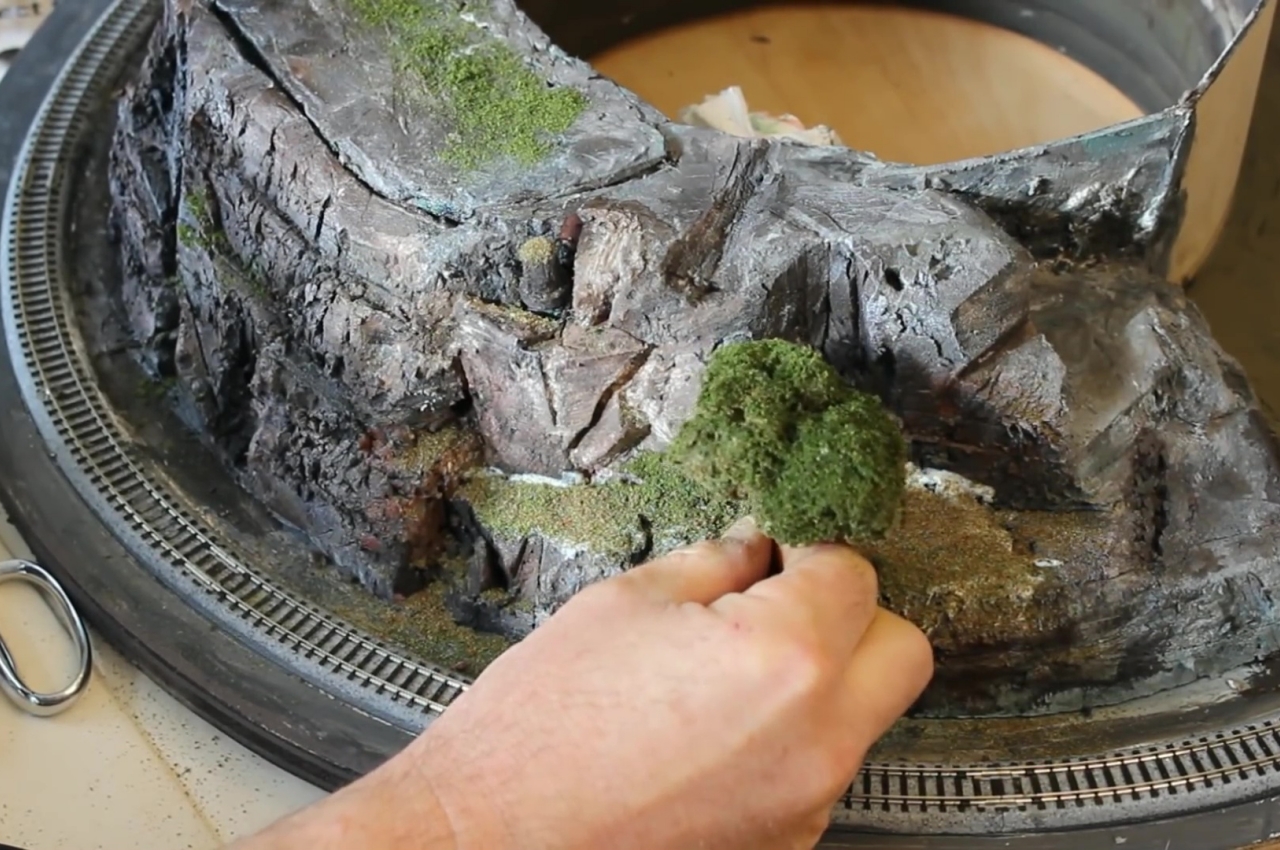 This project won’t win any sustainability awards due to its use of foam and some chemicals, but it would have admittedly been harder to pull off without those. This isn’t the first time this engineer slash electrician slash woodworker has dabbled in hiding model railroads inside tables, but this might be the most enchanting one yet. Watching a seemingly innocuous wooden round table split apart and reveal a mini-train system and alien spacecraft makes for an experience that is truly out of this world. 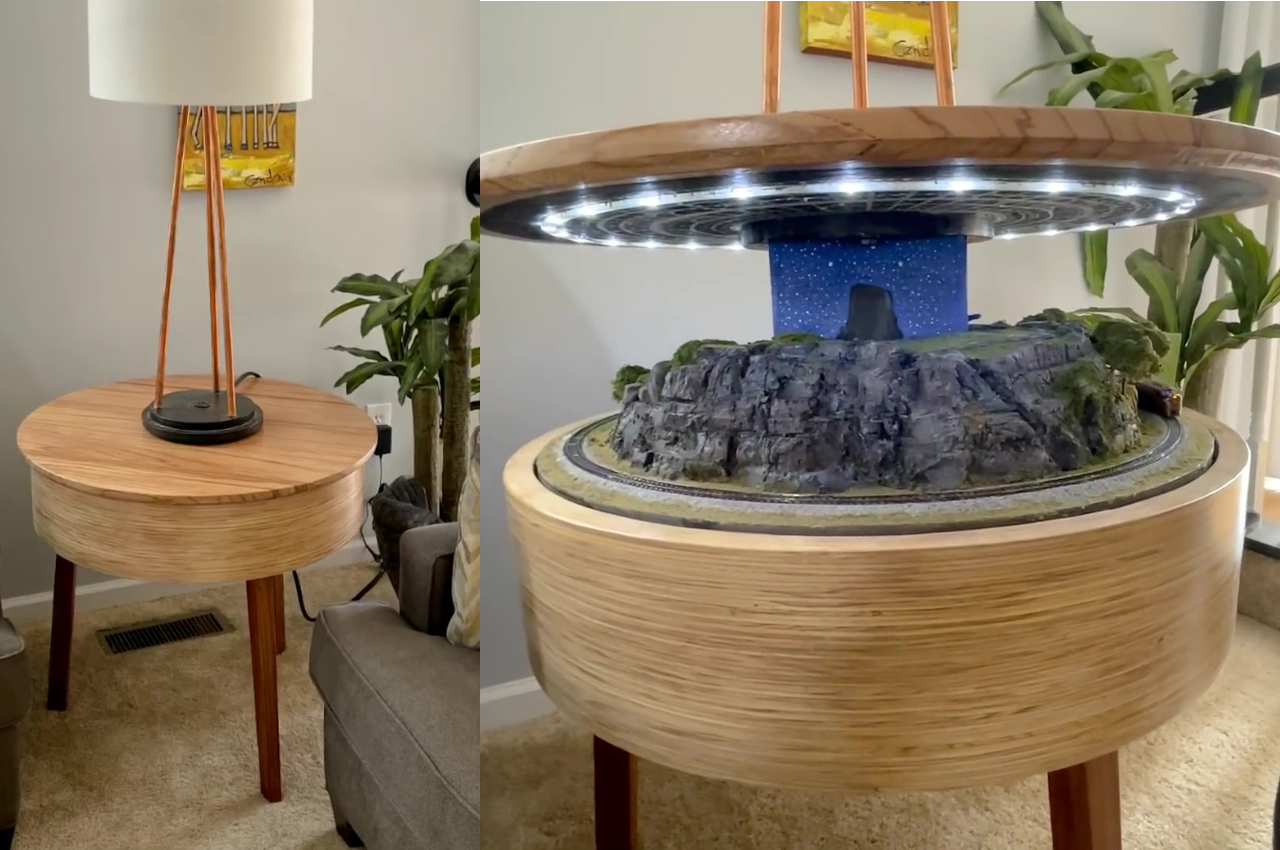 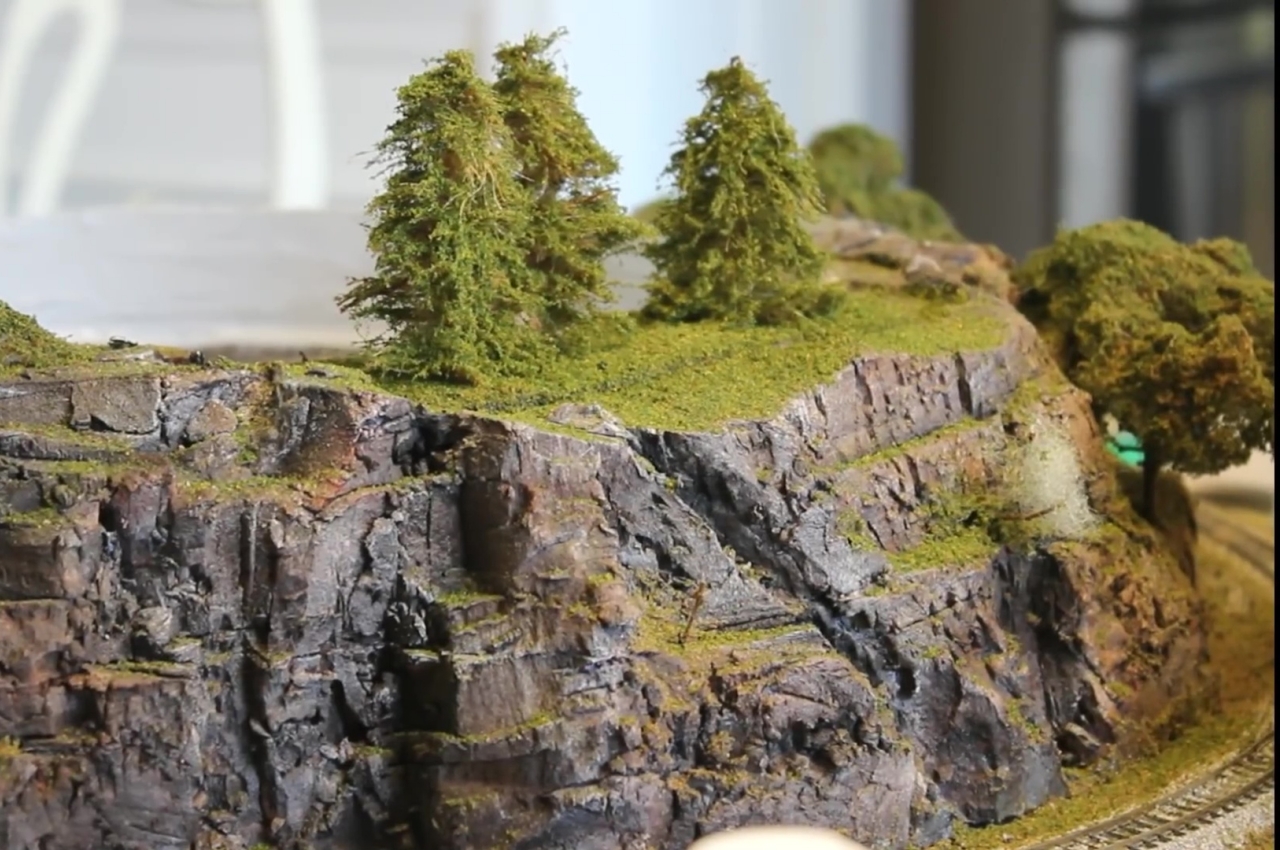 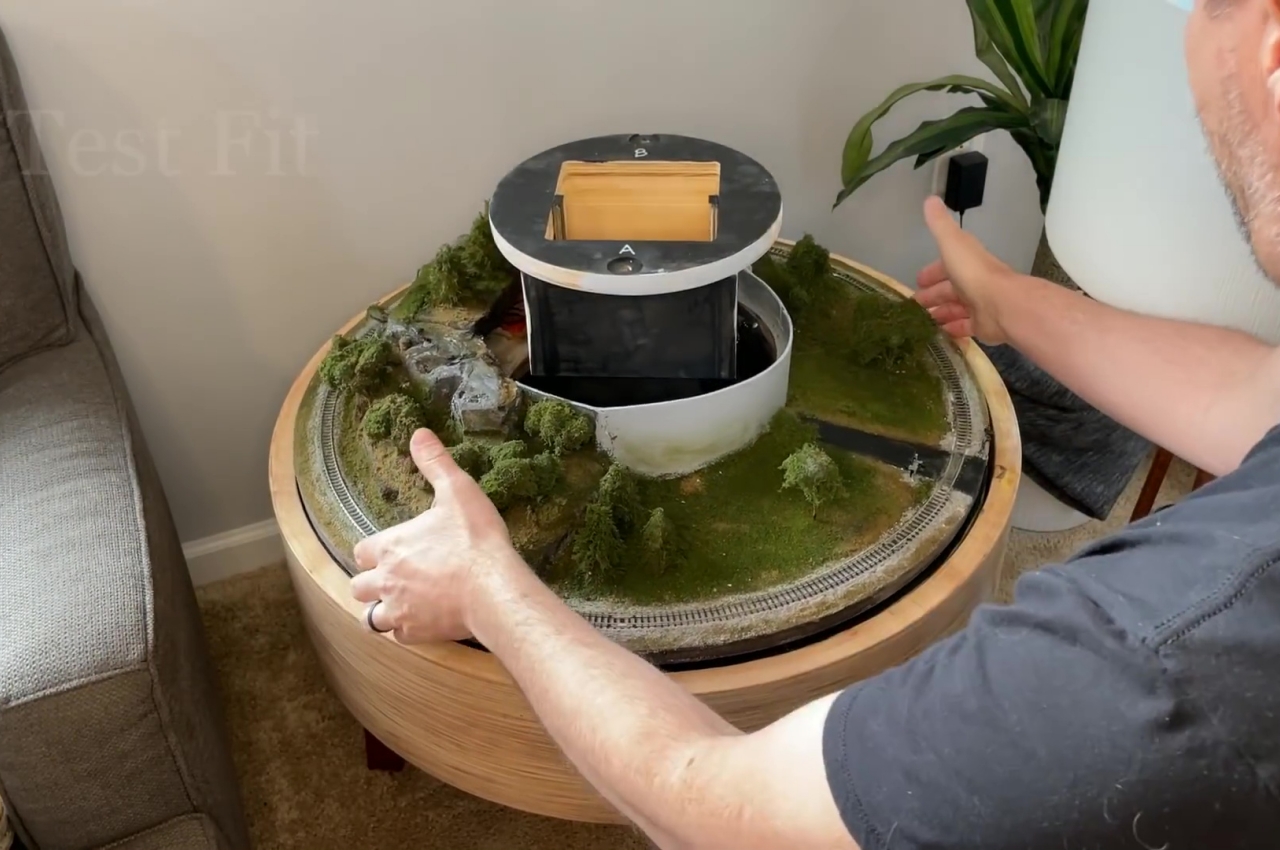 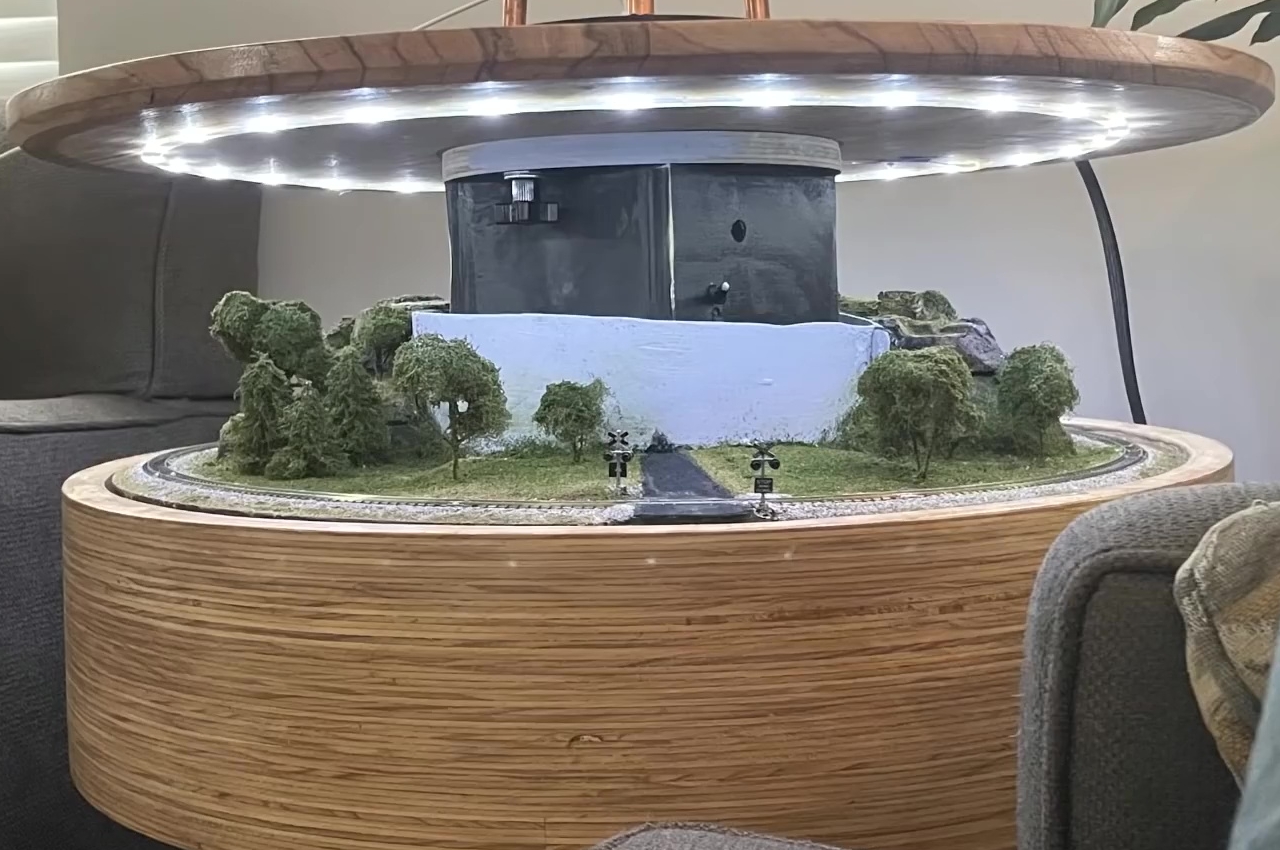 This modular hotel concept merges environmentalism with escapism, making it the ideal retreat for 2021!

Koto Design, a team of architects and designers known for constructing Scandinavian-inspired modular homes and small buildings, has recently teamed up with Aylott + Van…

Seating with a Sliding Surprise

Get ready to be OBSESSED with the Beatle! When you’re choosing a piece of furniture like a sofa, you have to make sure the back,…