This Frankenstein monster of a laptop basically attaches an iPad Mini onto an M1 Mac Mini, giving you a laptop with more ports and better performance than a MacBook Pro while still being a (theoretically) portable laptop. Obviously, I’m using the word laptop incredibly loosely here. Oh, it also has the added advantage of a touchscreen display with Apple Pencil input.

YouTuber Scott Yu-Jan hates laptops, as he so thoroughly expresses throughout his video (he even punches a hole through one for emphasis). Laptops, he posits, may be powerful, but a laptop never puts power above sleekness. Even the most top-of-the-line laptop today is still under an inch thick. Laptops were designed to be carried around everywhere, which means compact form and portability are a non-starter for manufacturers… but that’s where Scott voices his frustration. To him, the ideal laptop is just a desktop without wires. It should be portable, but it doesn’t necessarily need to be sleek. Hacked together to ironically (or not) prove his point, Scott’s MacMiniBook (or MacBook Mini if you’re pedantic) is the perfect solution for people who want a truly powerful zero-compromise laptop. Sure, it isn’t sleek, but it doesn’t pull punches. With an M1 chip on the inside that lifts well above its weight, Scott’s creation comfortably bridges the gap between the laptop and desktop experience. In fact, parts of the video above were even edited on Scott’s MacGyvered MacBook Mini. 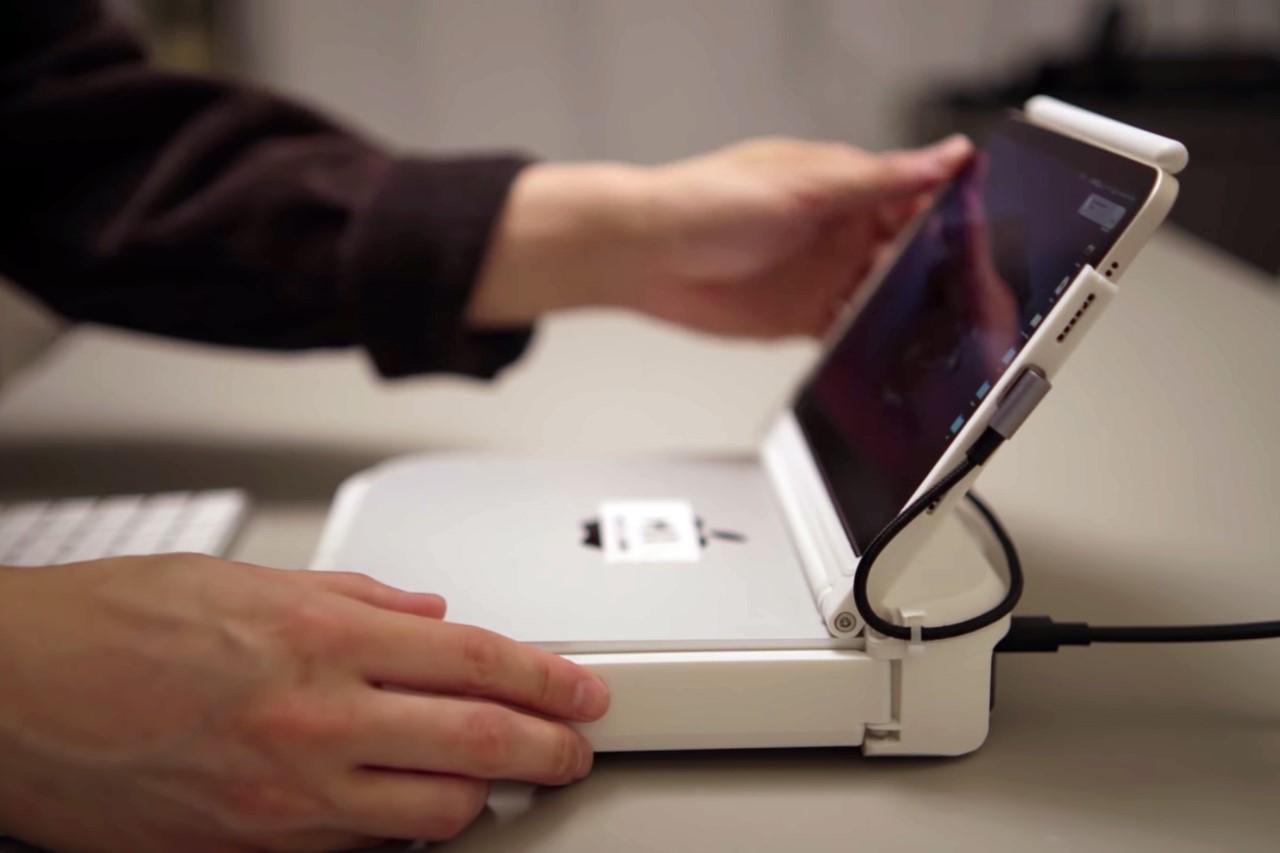 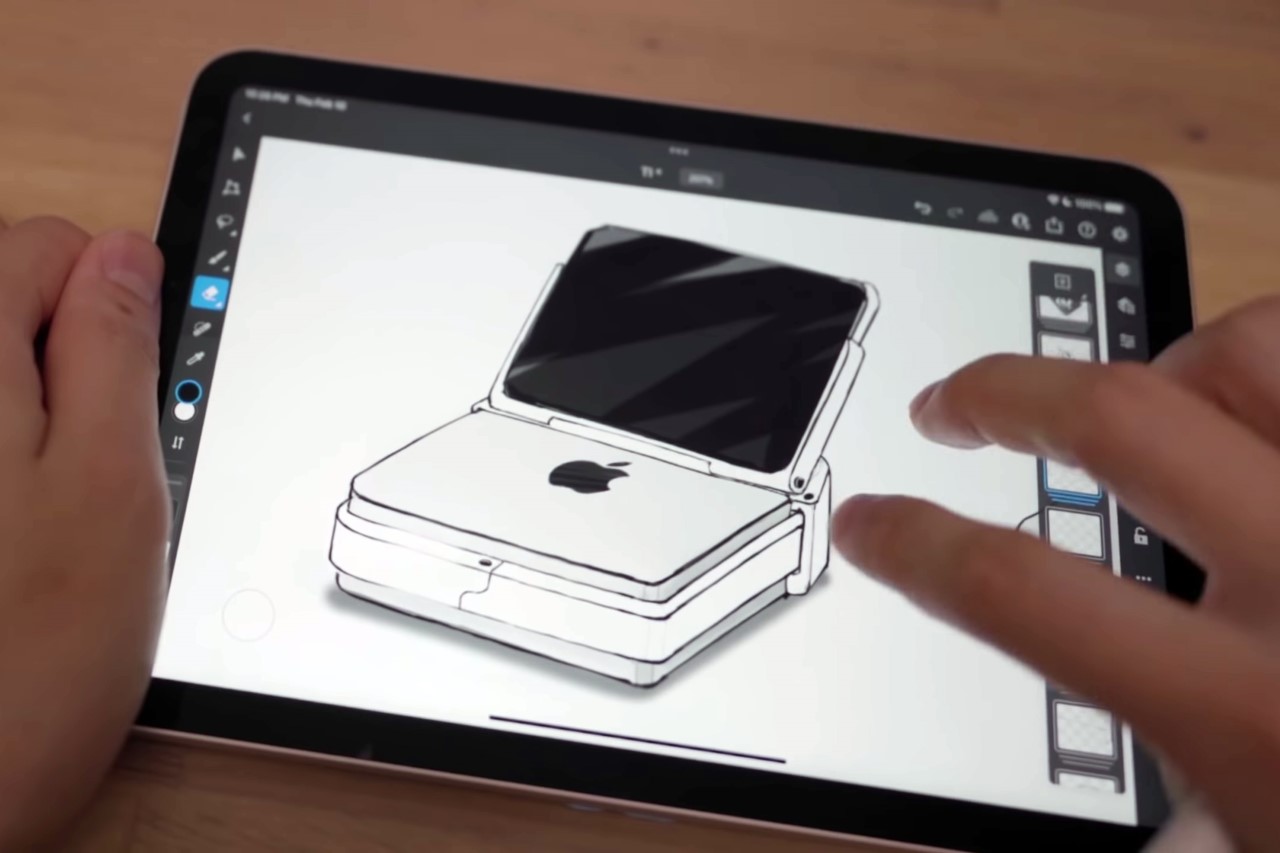 Scott’s experiment started with just picking up a Mac Mini and wondering how to go from there… but where things really picked up is when he, just for kicks, placed his iPad Mini on top of the Mac Mini only to realize that they were exactly the same size. What were the odds, eh?! I guess Apple takes nomenclature pretty seriously. 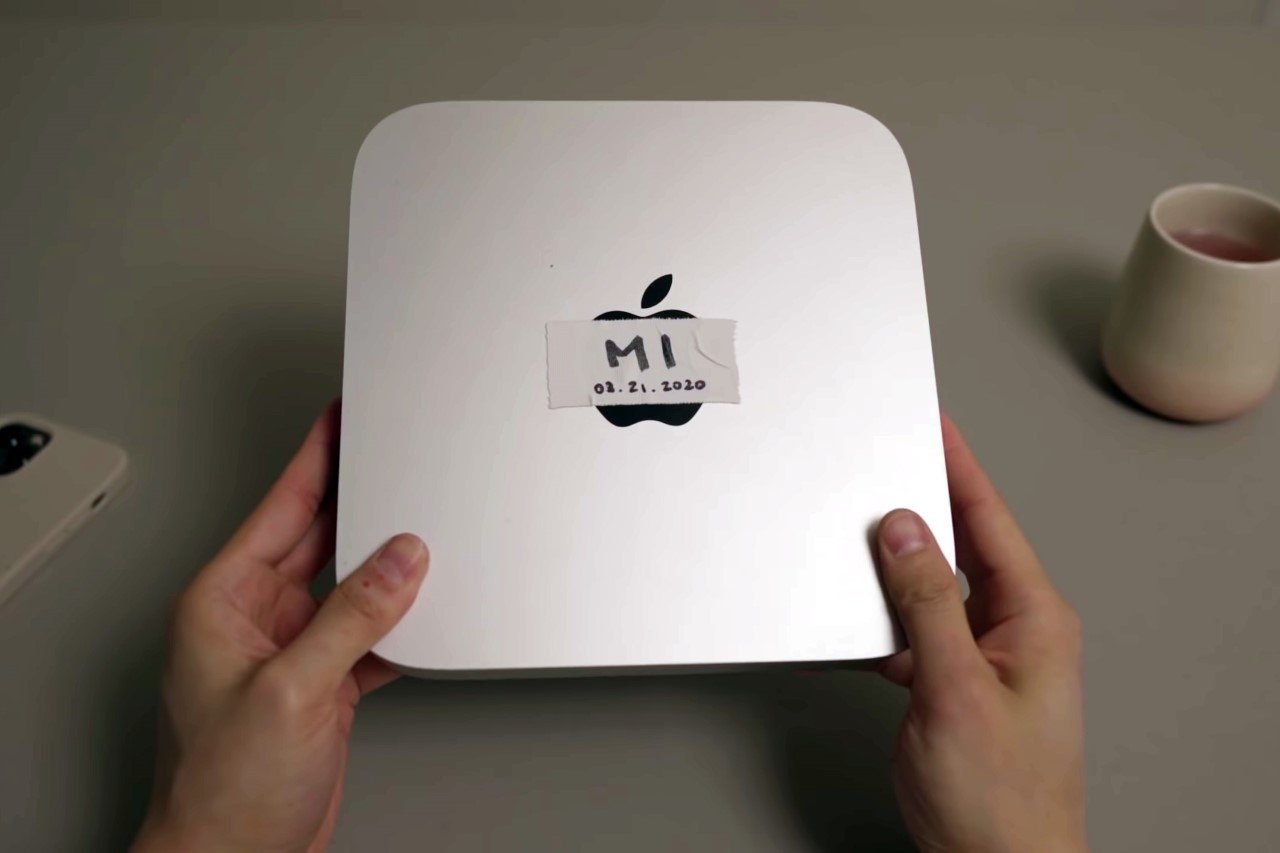 Once the perfect CPU and Display combo were picked out, it was just a question of merging them together into a rather chunky looking laptop. Scott designed, modeled, and 3D printed his housing in multiple parts, complete with openings for ports and cables, and even a friction hinge that would let you adjust your iPad to any angle you wanted. 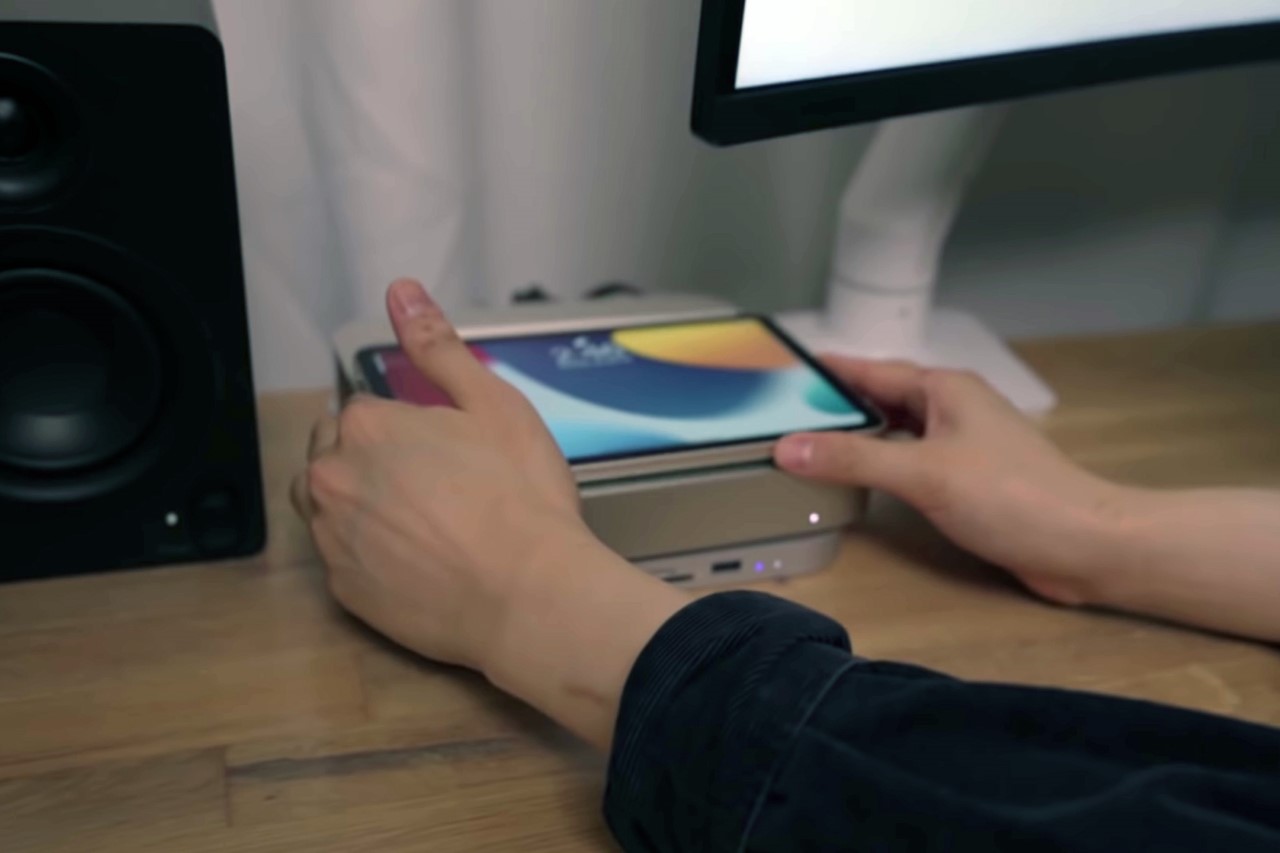 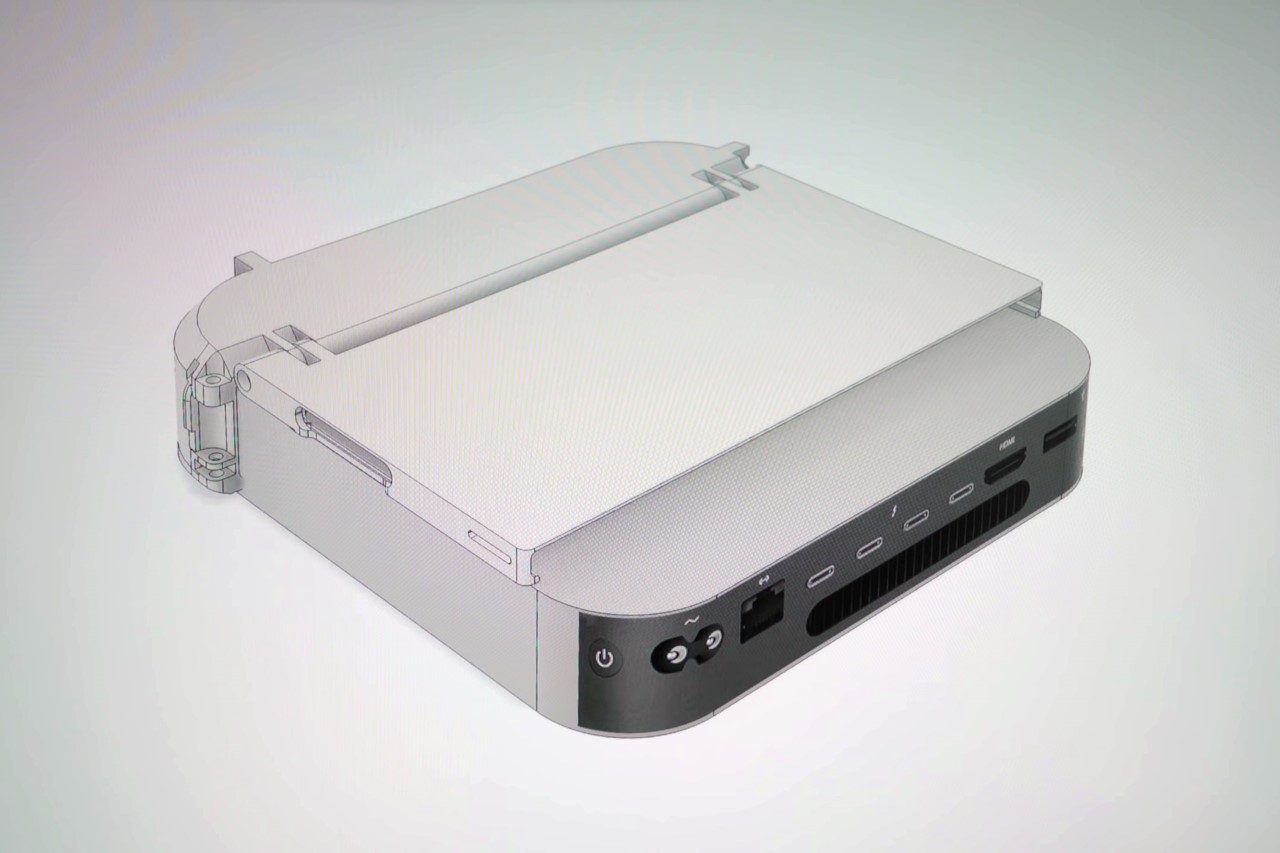 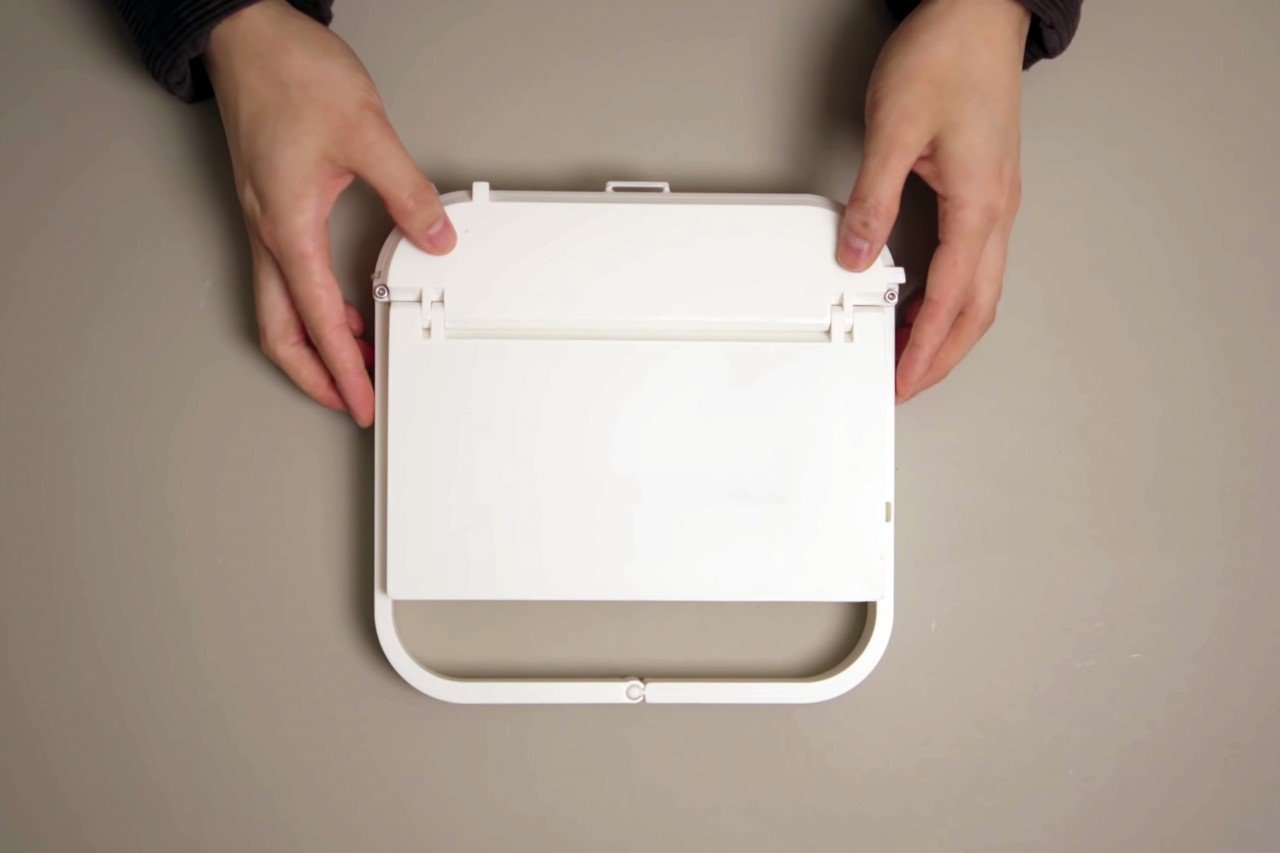 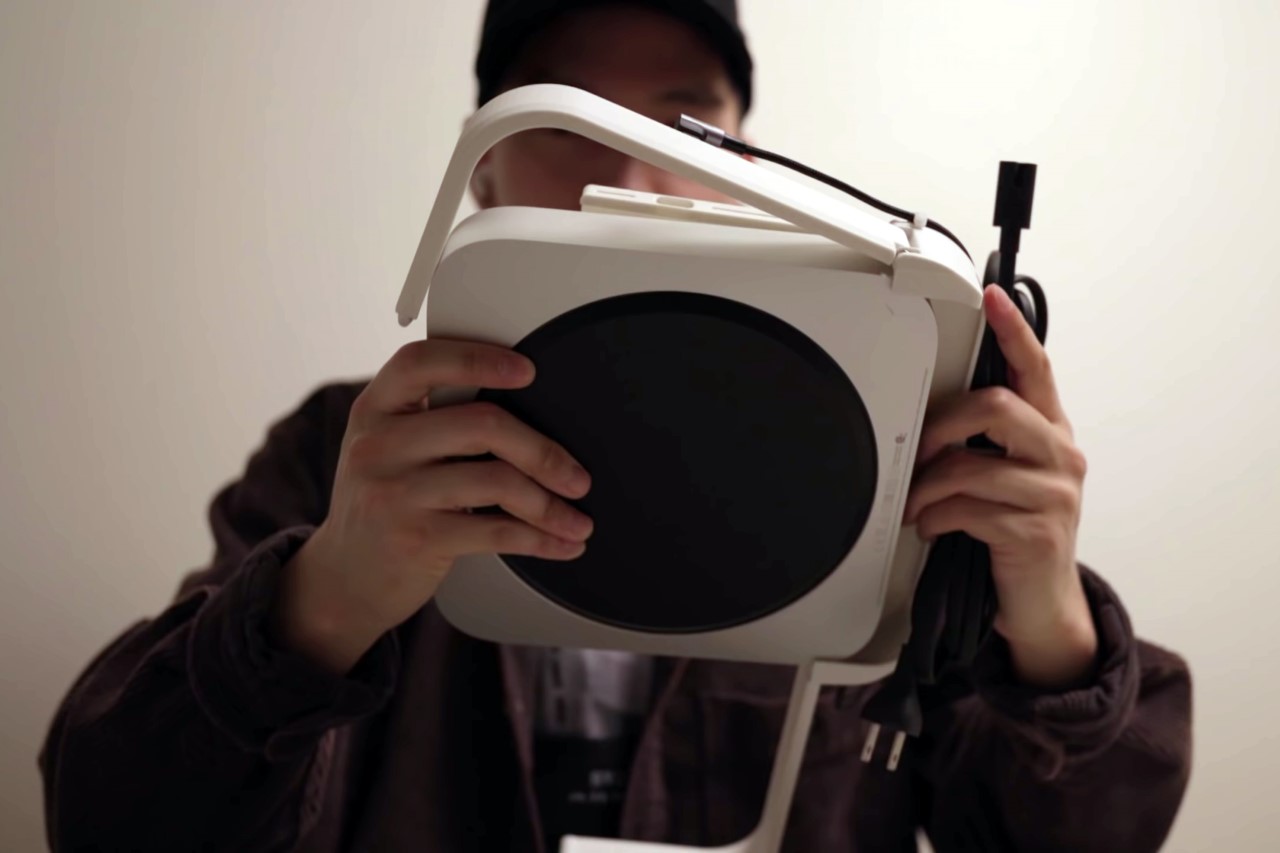 Scott’s solution is what the internet would call ‘thicc’. It isn’t elegant by a far stretch, but it’s job isn’t to look elegant, it’s to outperform every laptop out there – a claim that Scott was pretty confident about once his solution was ready. 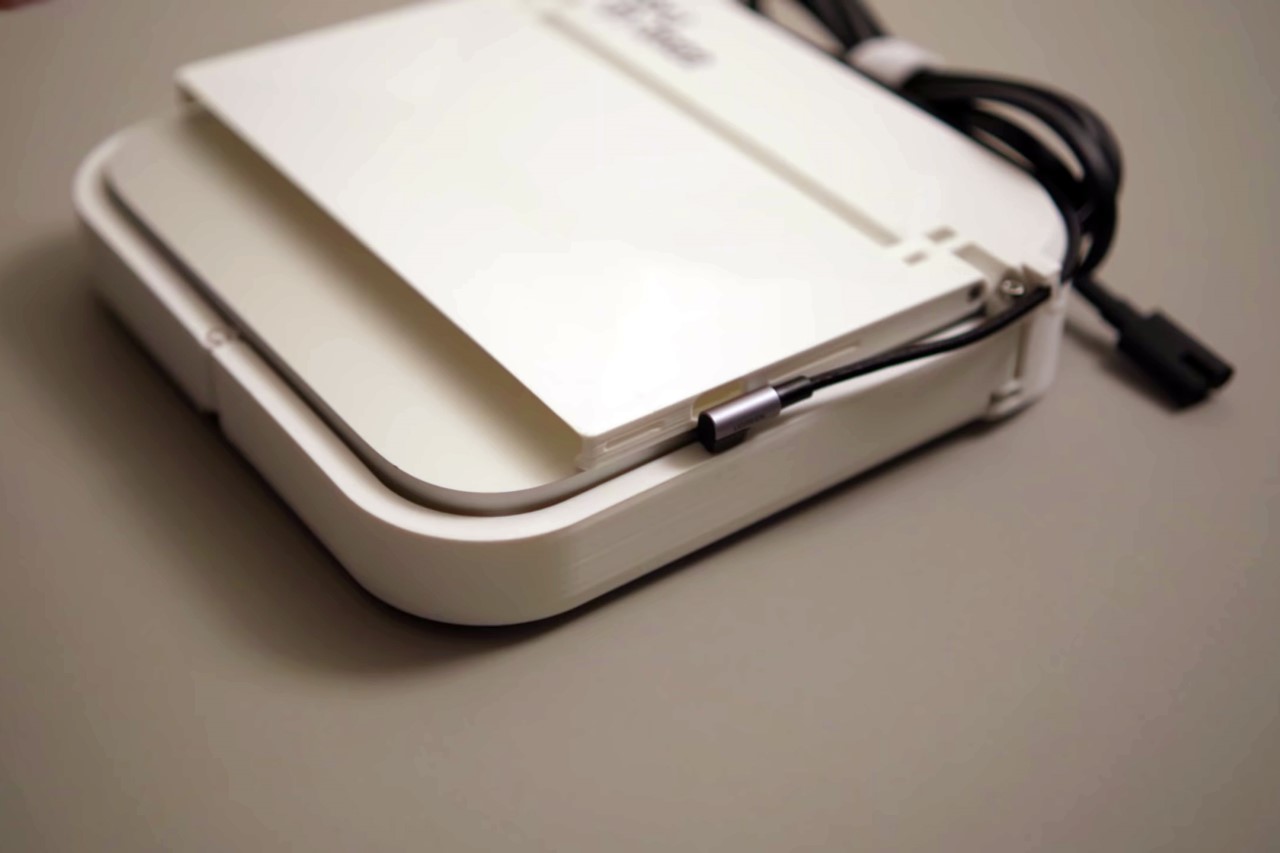 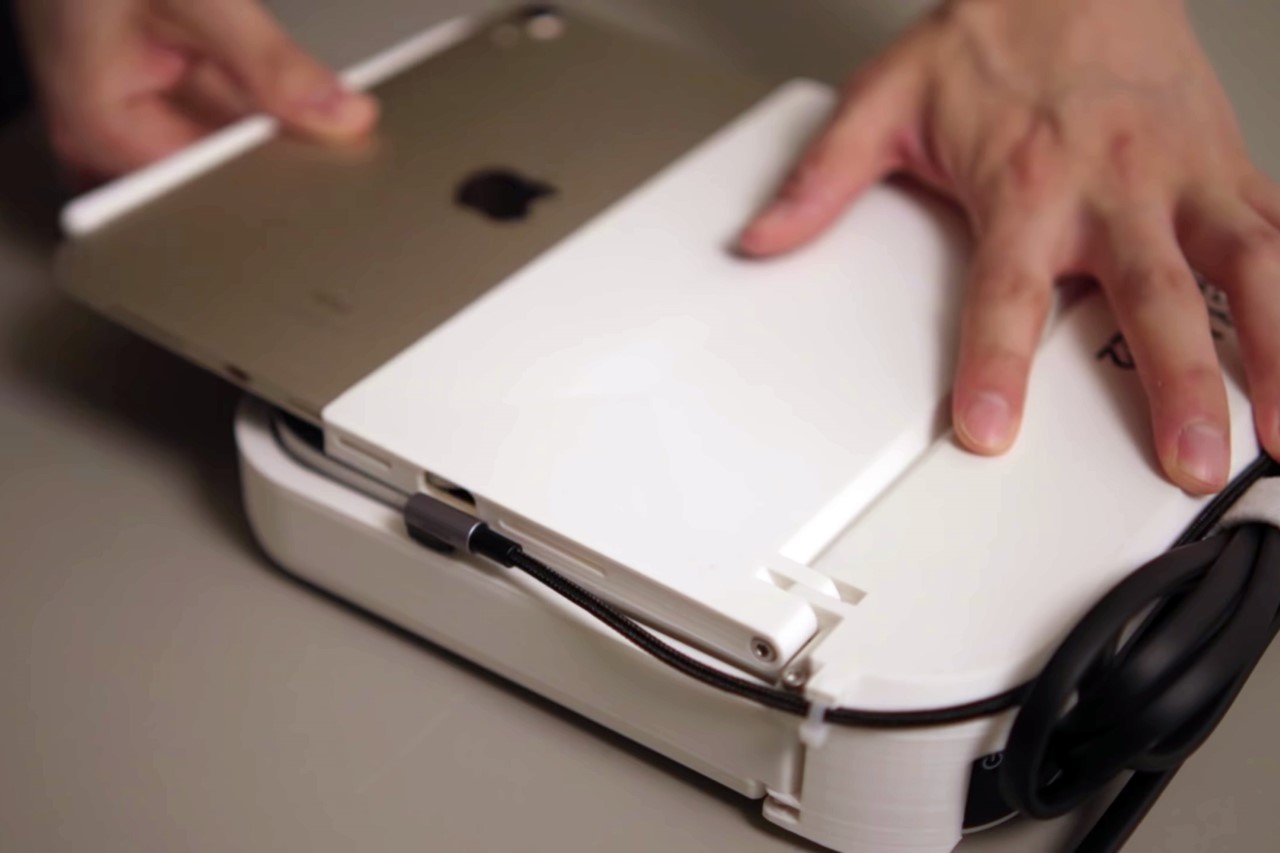 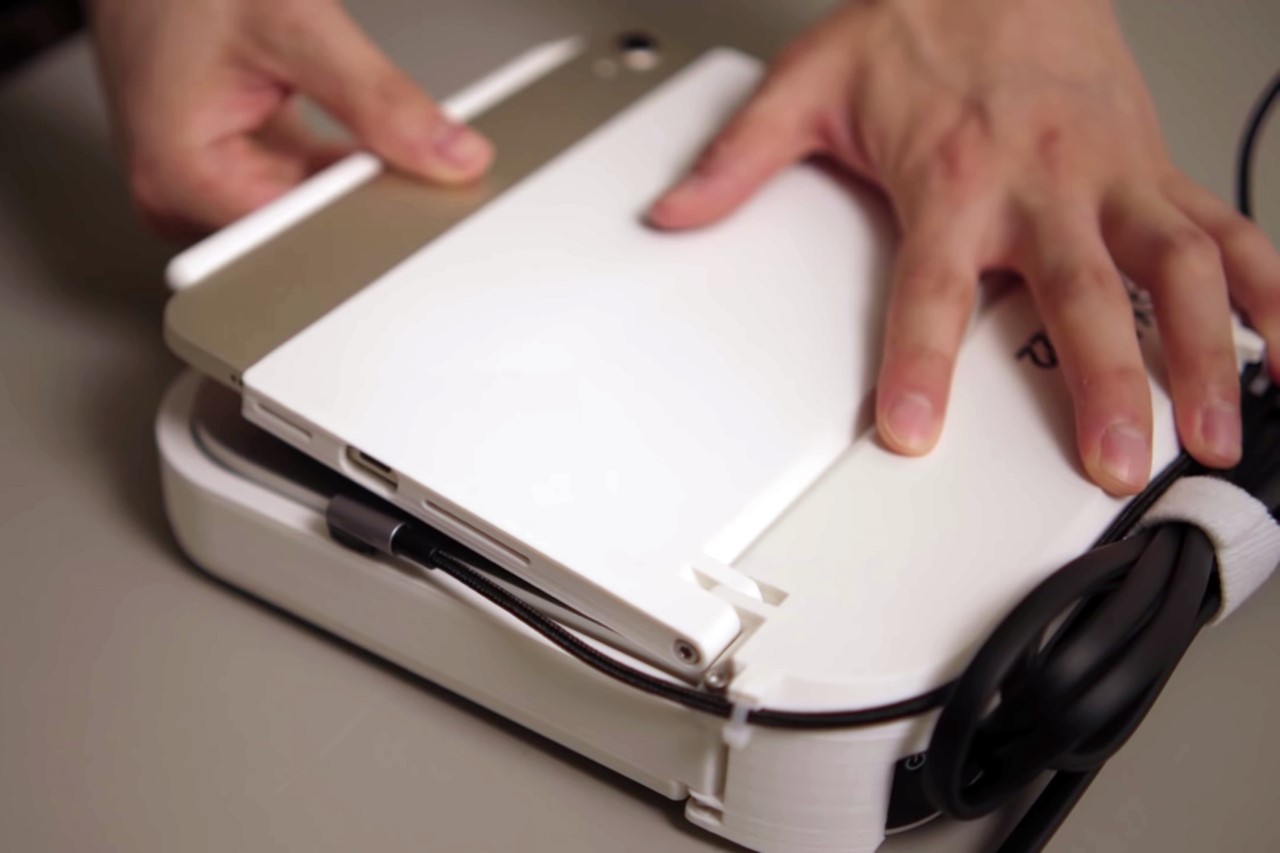 To run his mad machine, the iPad would have to work as an external display, rather than a tablet. Scott’s app of choice was Duet, using it to create an external screen for his M1 Mac Mini. A USB-C cable both beamed video information to the iPad, while keeping it charged. The upper edge of the iPad would remain plastic-free, allowing Scott to still dock his Apple Pencil. 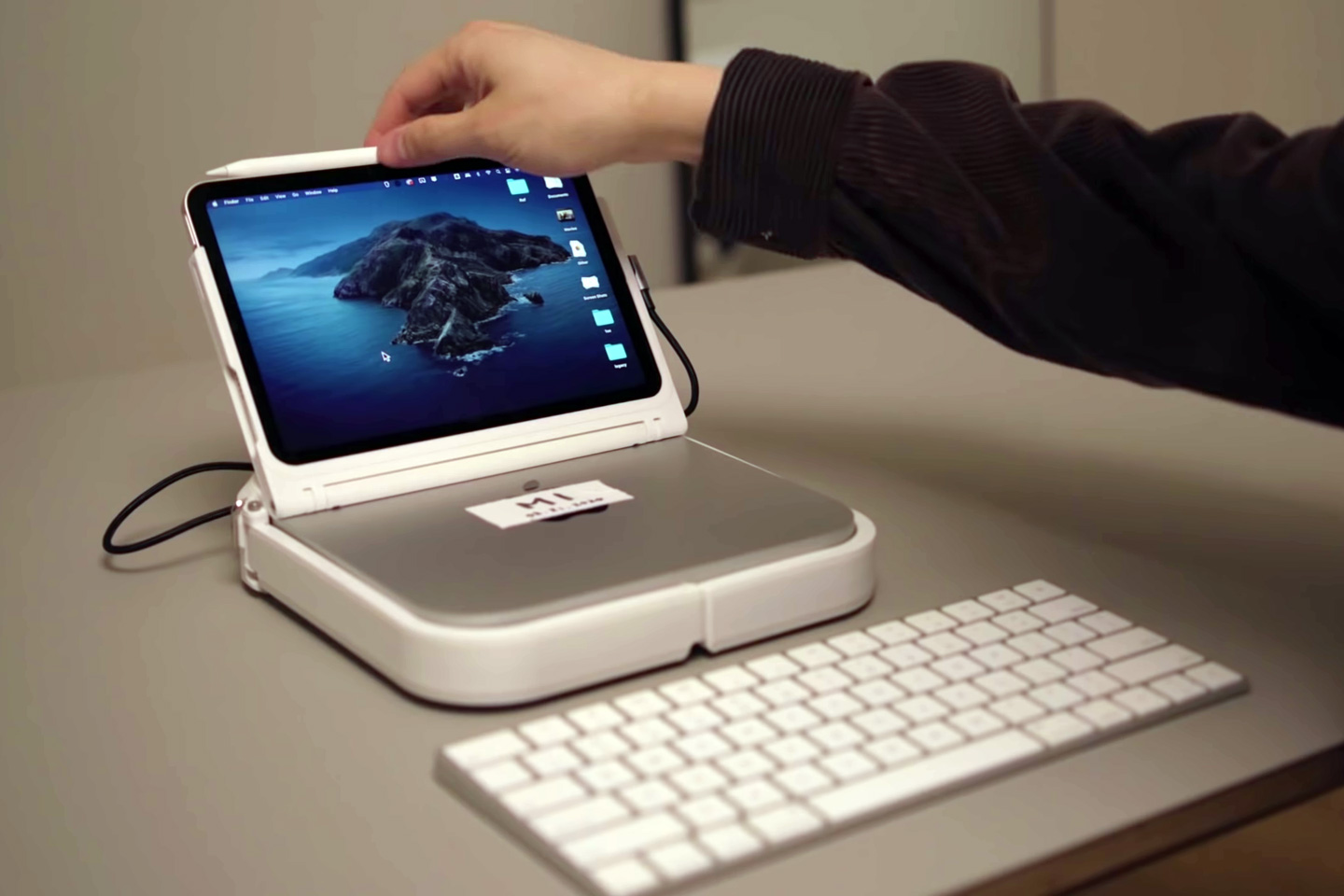 Scott’s creation is undeniably bonkers, but it is an incredibly powerful device on paper. The M1 chip handles complex tasks without consuming power or causing the cooling fans to go crazy. Scott demonstrated this by even editing a 2K video on it. Then again, his Frankenstein MacBook does have a few tiny flaws. For starters, it doesn’t have a built-in battery, which means you need to continuously stay connected to a power source to use your machine (unless you just want to use the iPad). Secondly, and in the same vein, there’s no keyboard or trackpad on this laptop, although Scott says he’s more than comfortable carrying a Magic Keyboard around with him as a tradeoff. Finally, using the machine takes a little getting used to. For starters, you need to separately switch the Mac Mini and iPad Mini on every time, and configure Duet too. While shutting your laptop down, you need to switch the Mac Mini off too, given that closing the lid doesn’t snooze this laptop. Even the webcam placement may bother a few, and finally, the presence of 2 cables that are a permanent fixture may irk a few people… especially the design team at Apple! 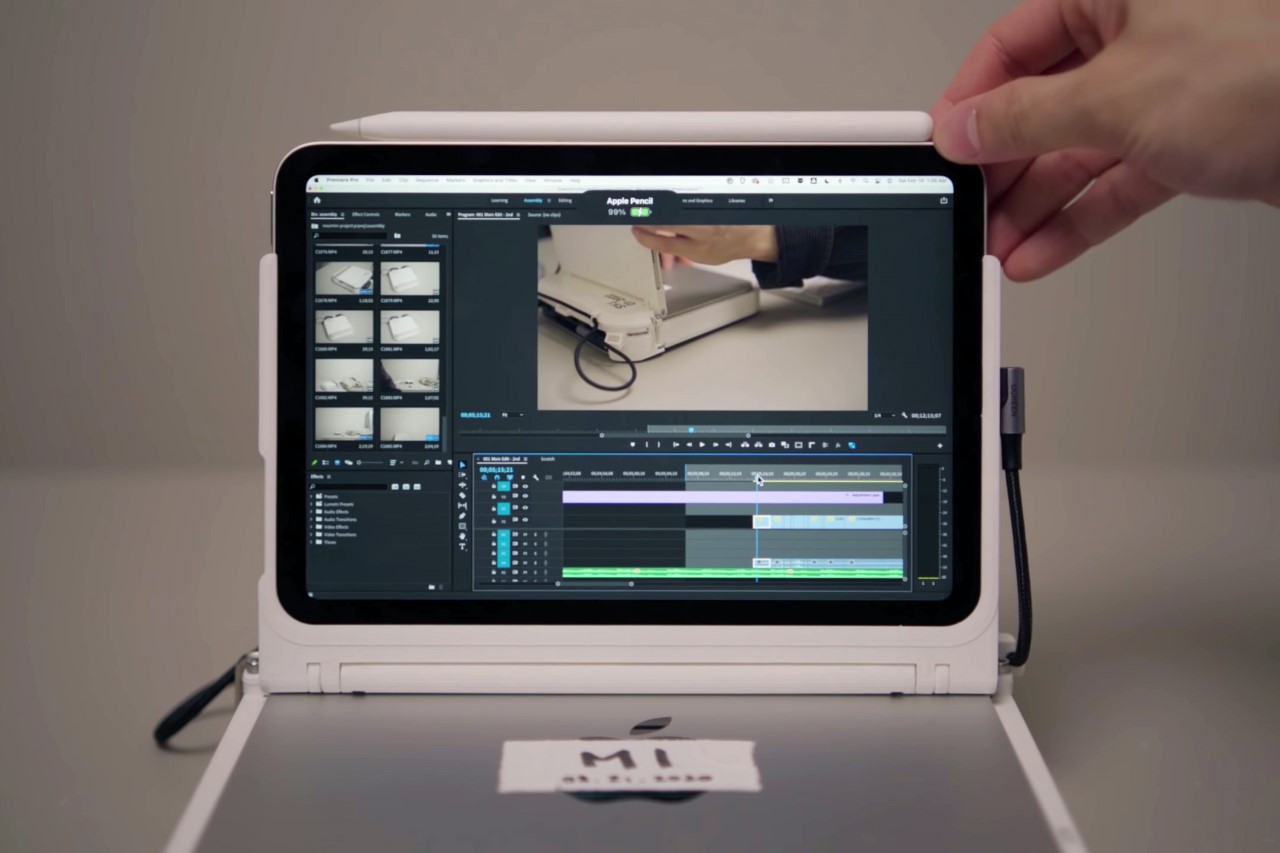 Geometric Art in an Accent Table

Constructed with geometric precision, VAI by designer Minseong Kim is a stealthy-looking side table solution rooted in mathematics. Its puzzling form is calculated using a…

Nigella Would Love This Ornate Blender

“What is this, 1958? Give the little wife a blender?” Famous quote from the iconic Father of the Bride, but I’m sure little Annie wouldn’t…