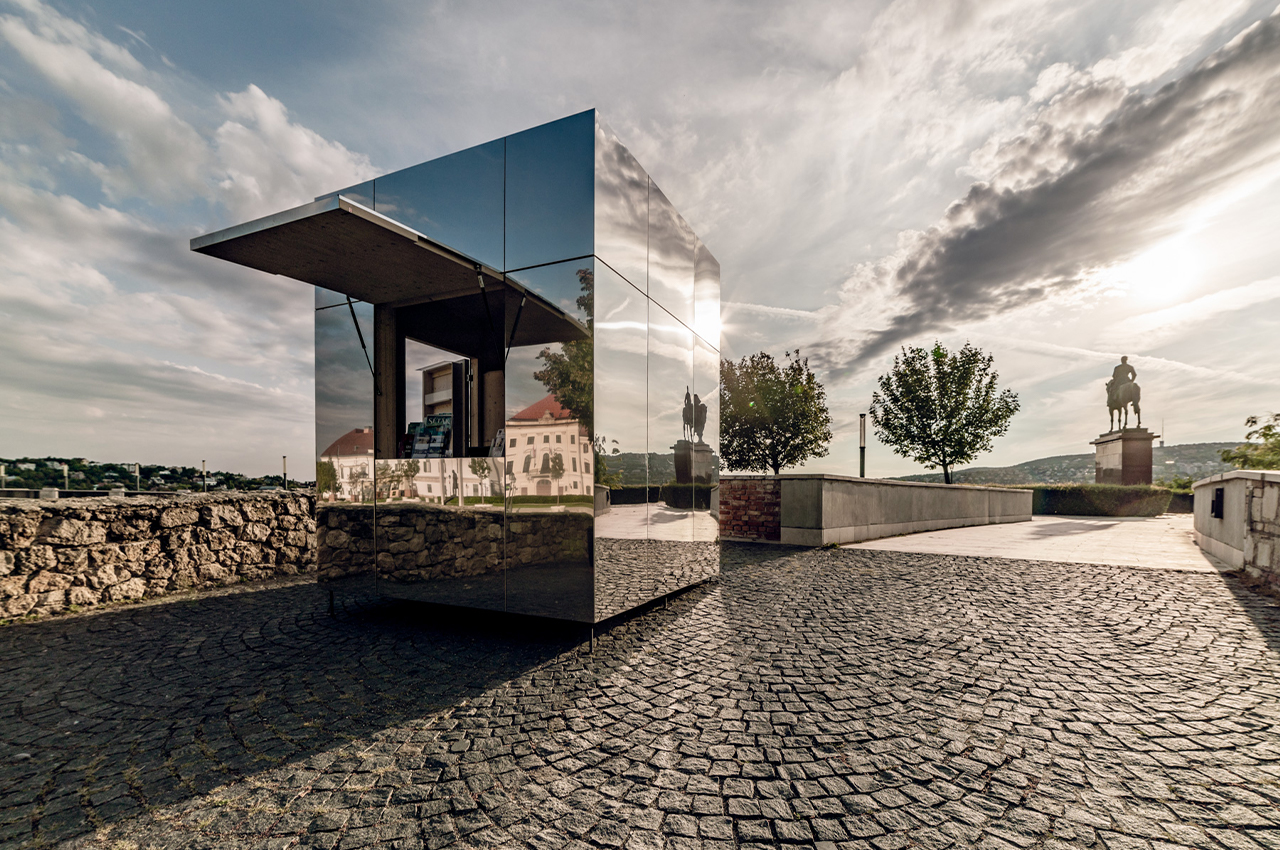 No one can say what a modern accessory building should look like when they’re built for 13th-century castles. There’s a fine line between an accessory building that looks in harmony with its larger residence and one that resembles it a little too closely, only to repeat the same note. 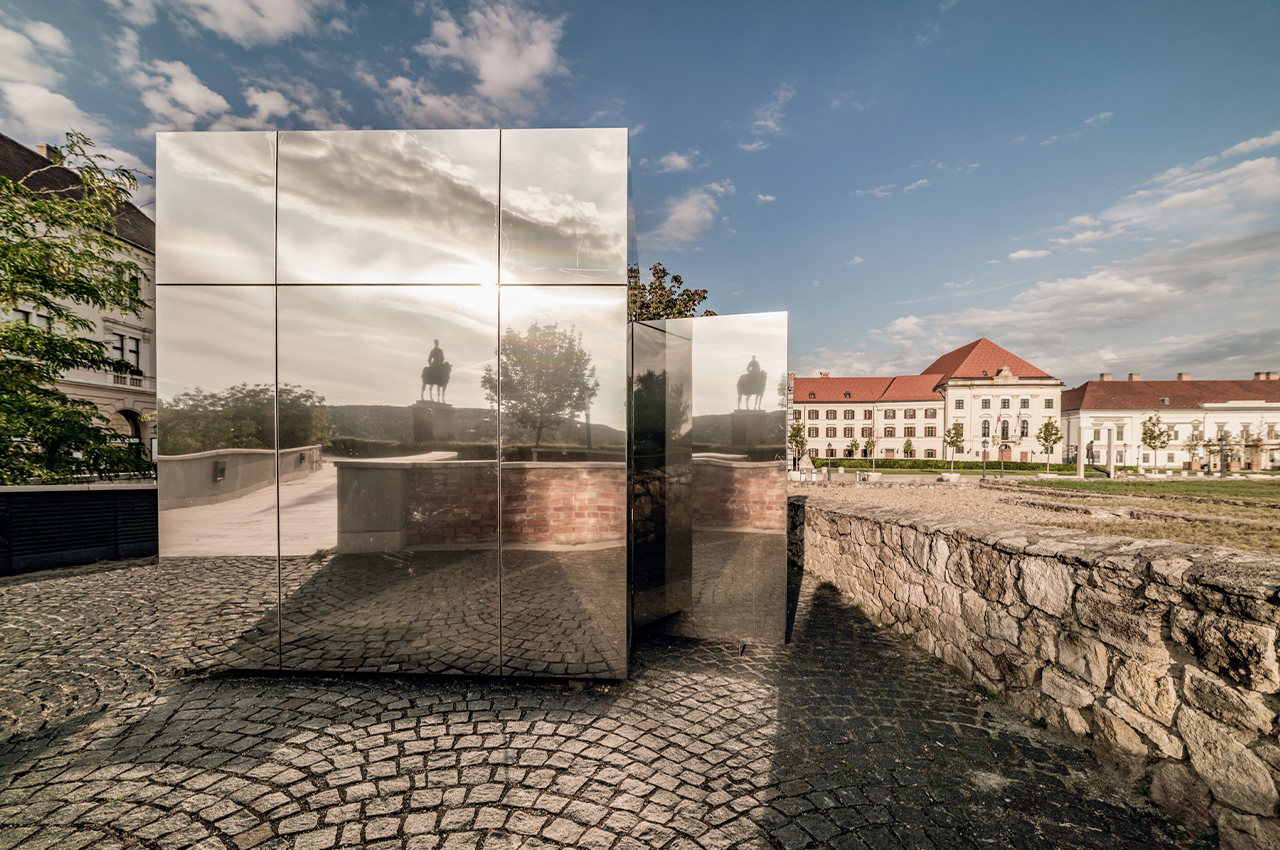 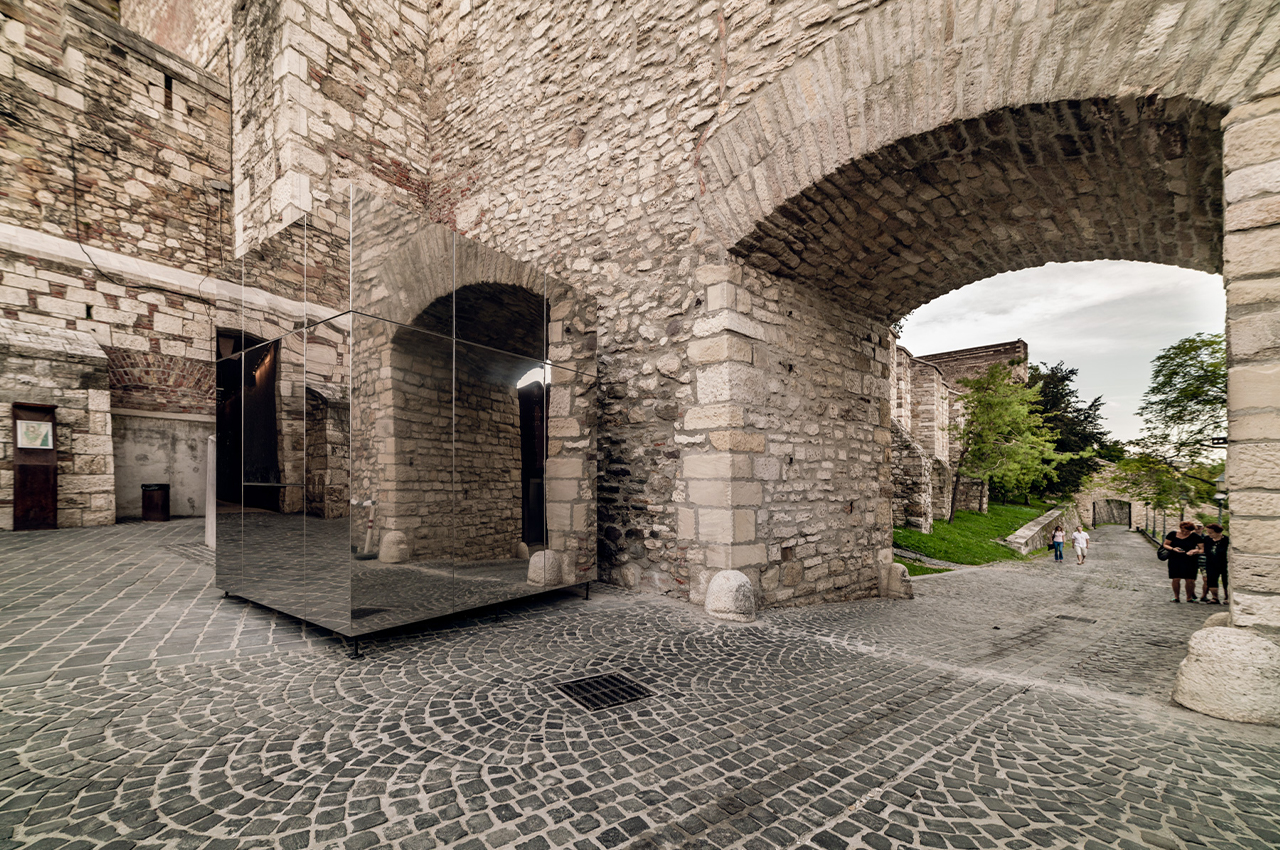 Up to the task, architecture studios BLOKK and Hello Wood collaborated to design new visitor centers and information hubs called Infopoints for Buda Castle’s grounds in Budapest, Hungary. Taking a blank canvas to its most extreme end, BLOKK and Hello Wood struck harmony through mirror-cladding and simple, geometric silhouettes to pay homage to Buda Castle without stealing the show. 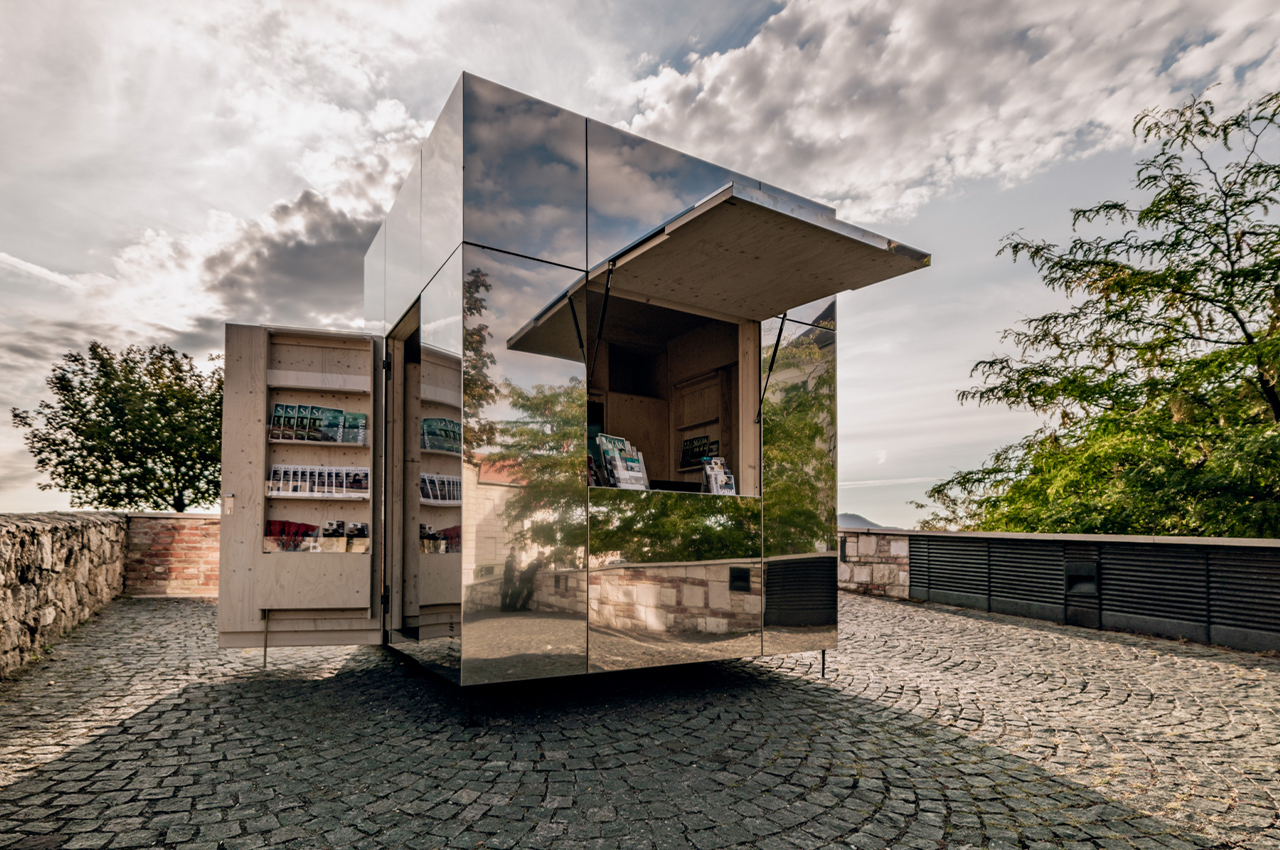 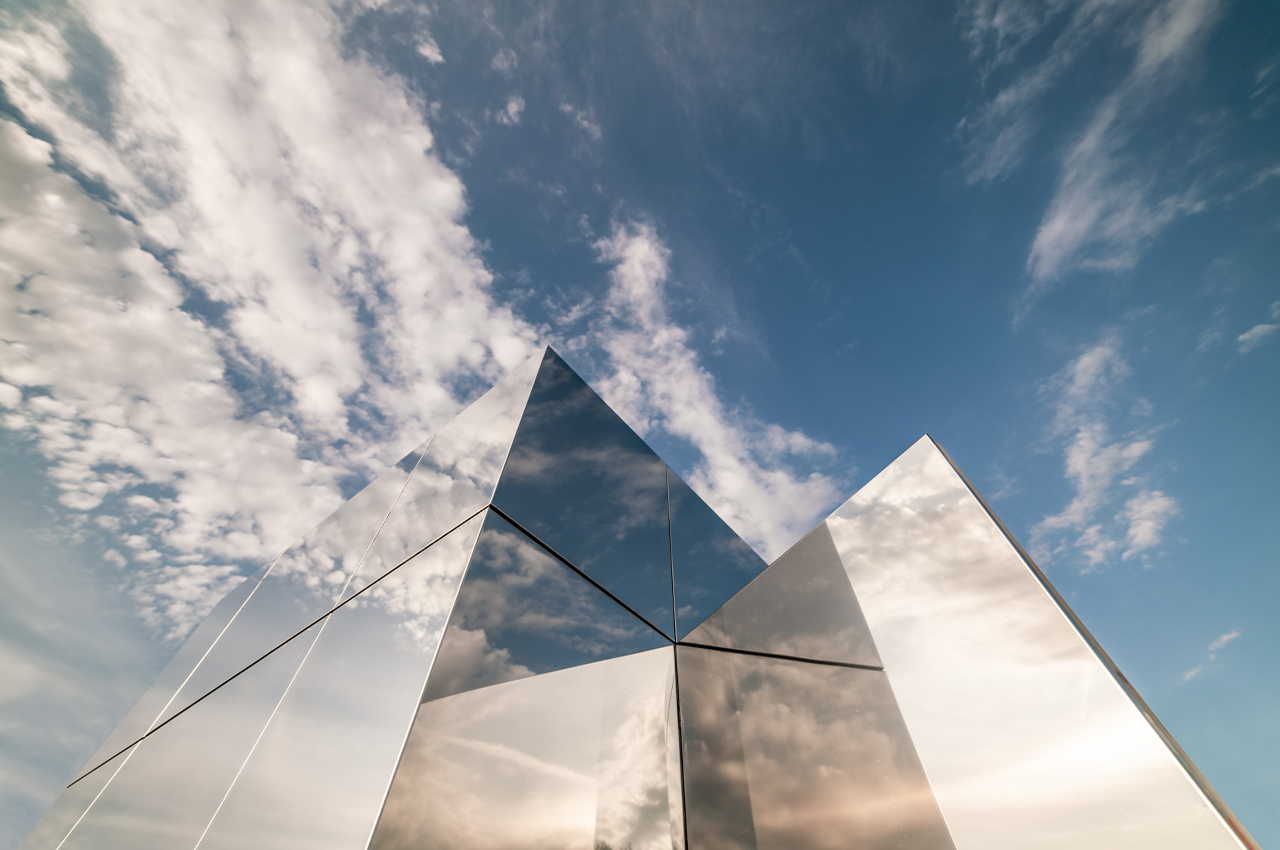 Buda Castle, the first royal residence on Castle Hill, was built between the years 1247 and 1265 by King Béla IV of Hungary. Throughout the years, Buda Castle underwent several reconstruction phases including one following the Siege of Buda in 1686 and one following the castle’s occupation by Nazi Germany during World War II. Considering the castle’s textured history, modern architecture studios, BLOKK and Hello Wood had to get creative. 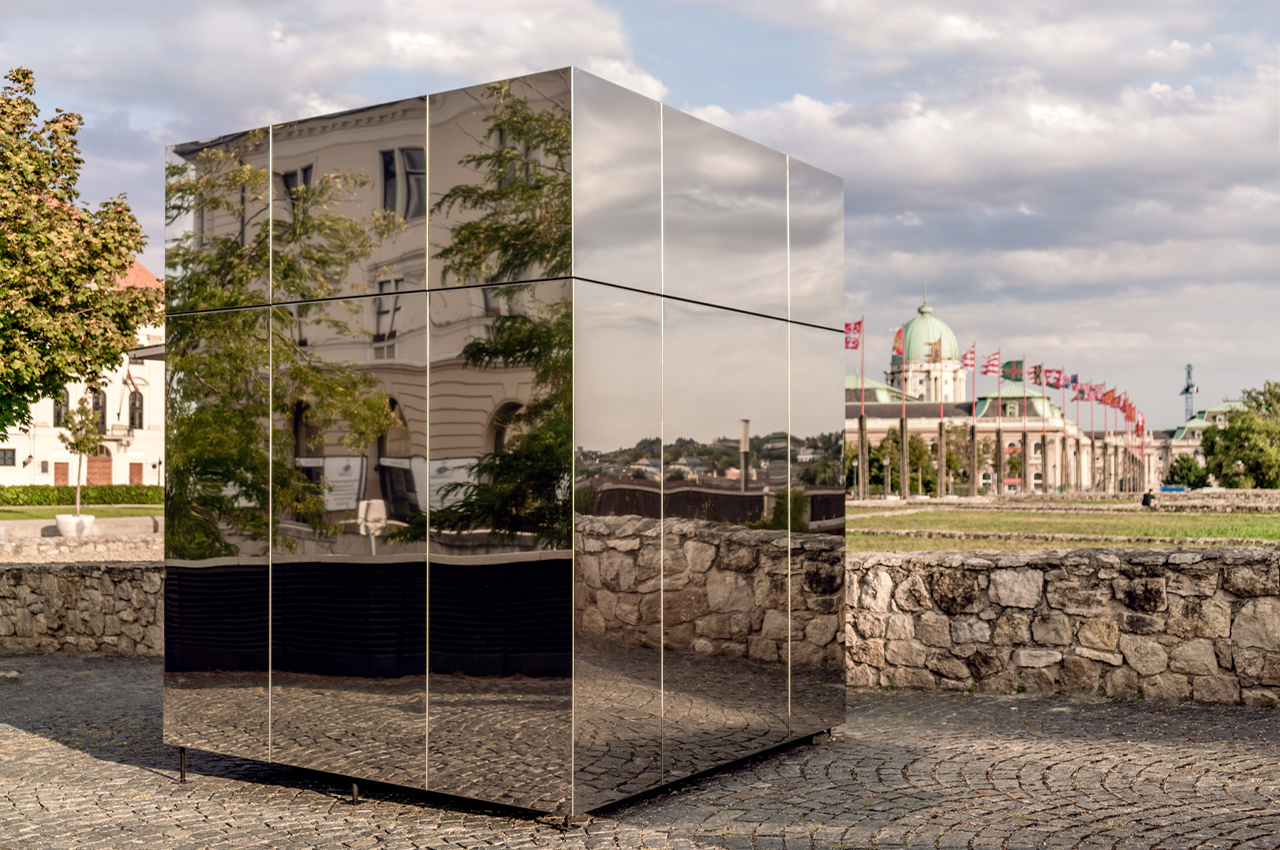 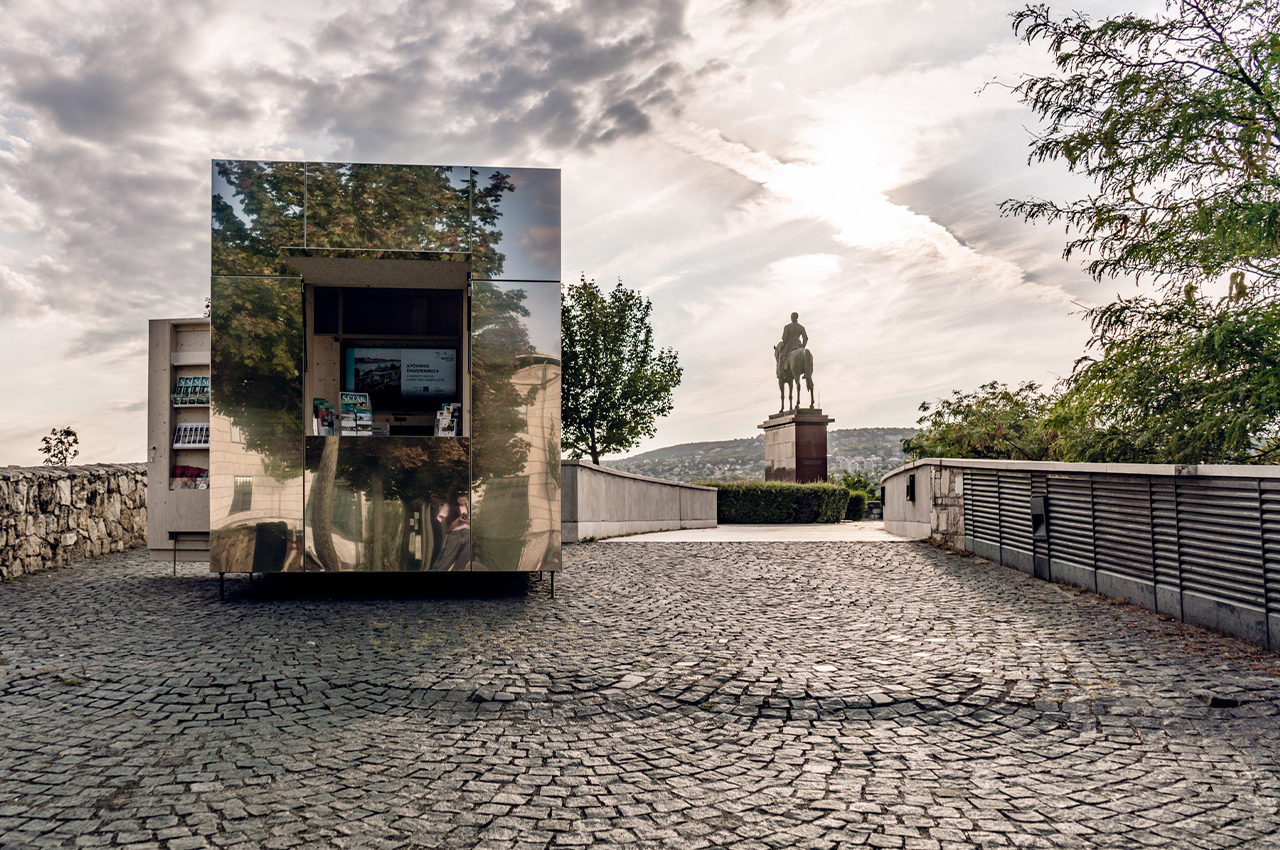 Located near the Palace of the Buda Castle, in its Palace District, the visitor centers and Infopoints each roughly cover 30-square-meters and fit in with their surroundings by responding to them. Looking to the castle’s shape for inspiration, the visitor center’s architects found unity through a cuboid body and a high-pitched roof, similar to the castle’s. Then, the Infopoint, which functions as the castle ground’s information desk and souvenir shop, keeps a cuboid shape without the pitched roof, similar to a street vendor’s pop-up shop. 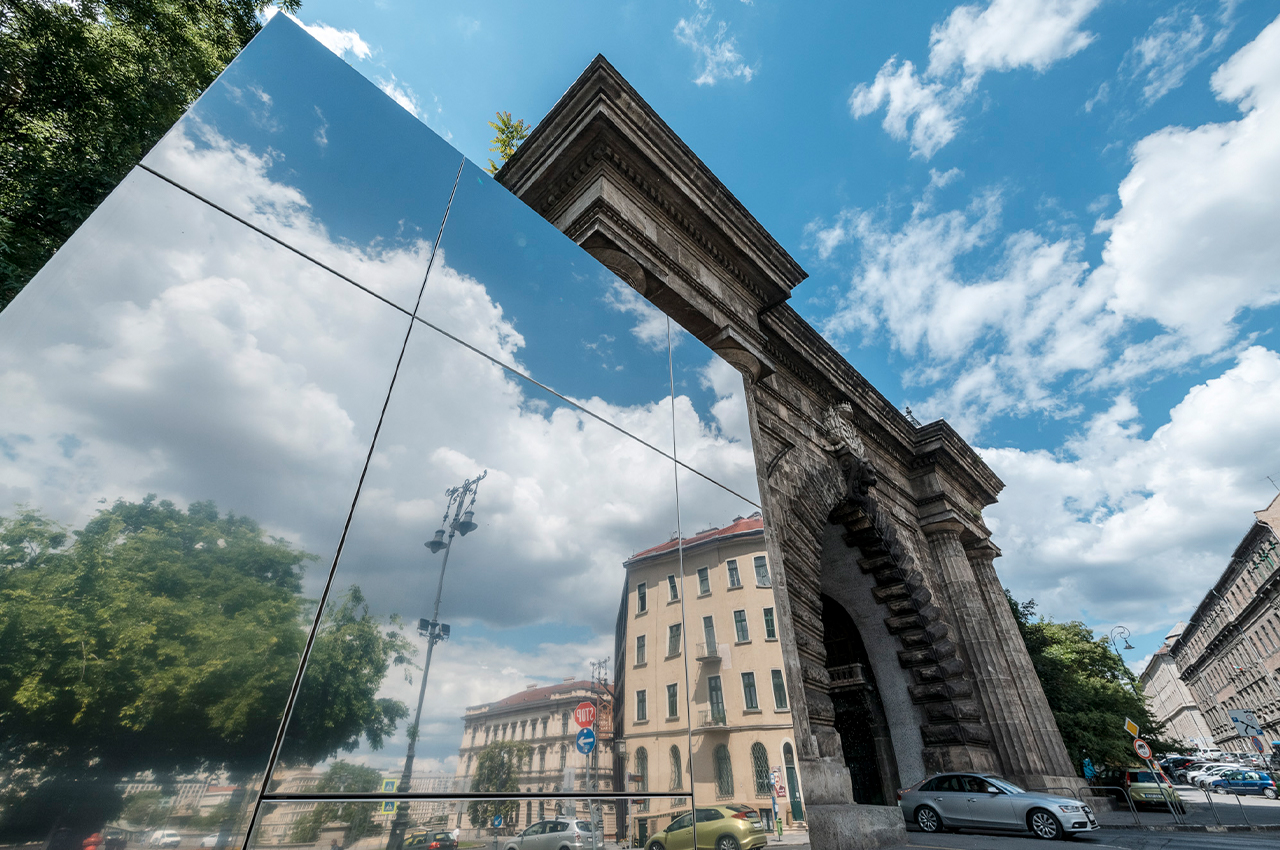 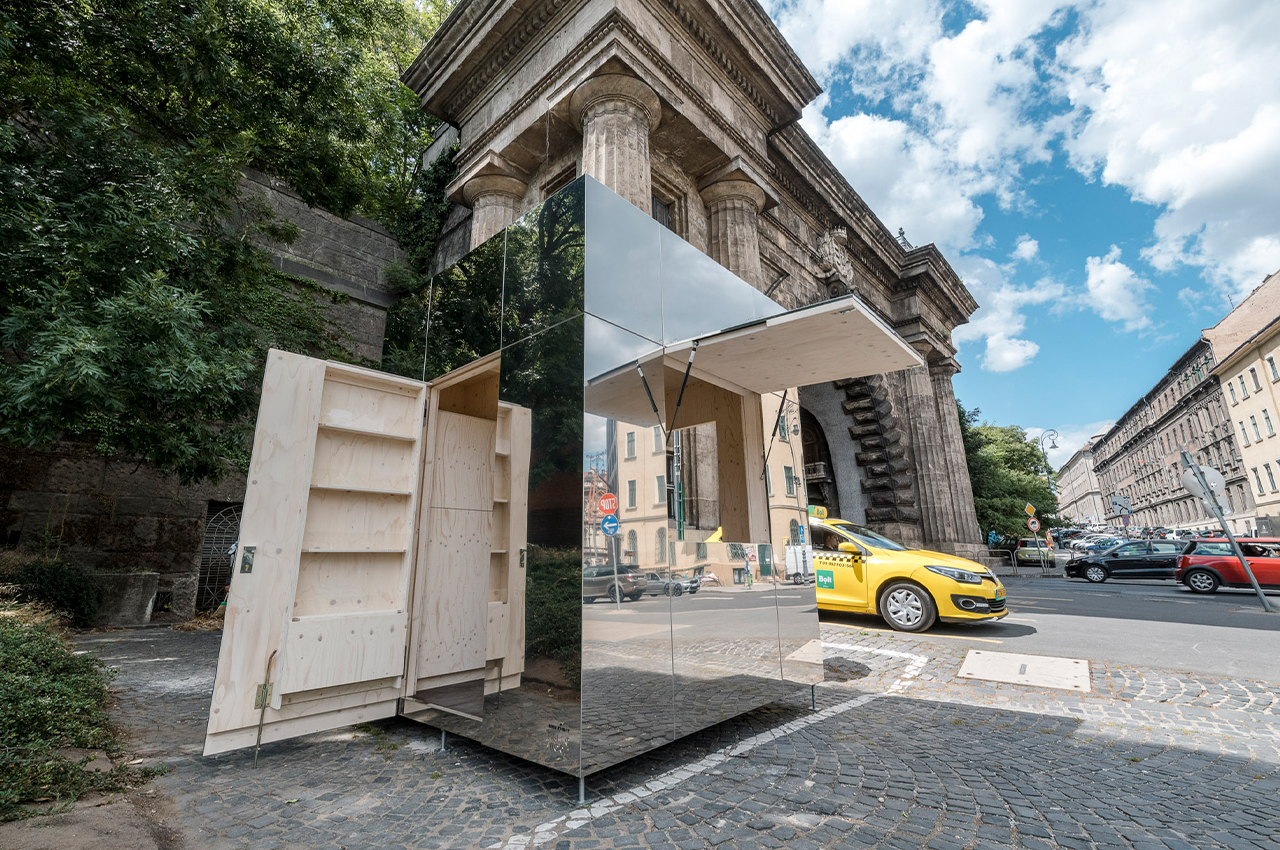 Constructed atop four steel-framed modules, which were lifted into place by a crane, the buildings are easy to assemble and transport. The visitor center’s and Infopoint’s mirror-cladding was chosen for its modern appeal and subtle reflection of its surroundings. 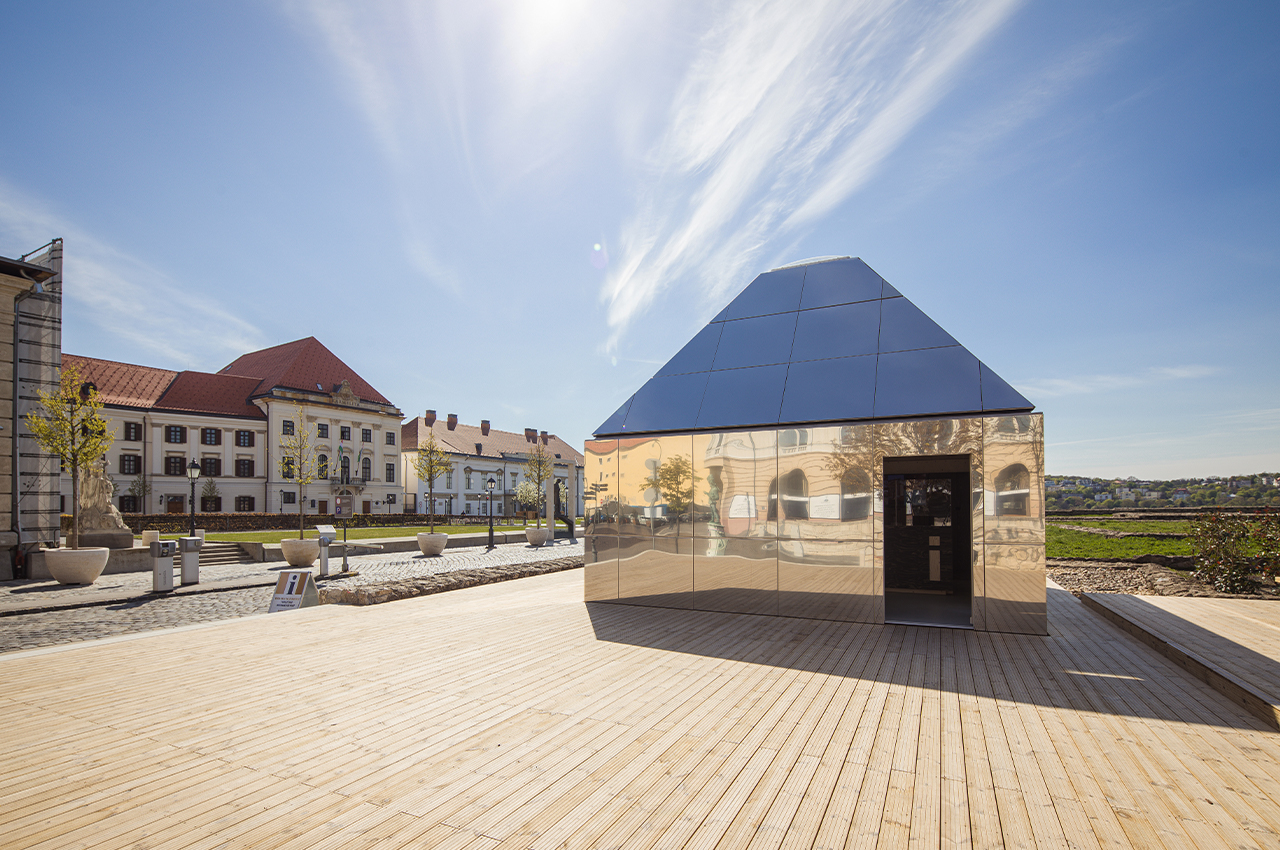 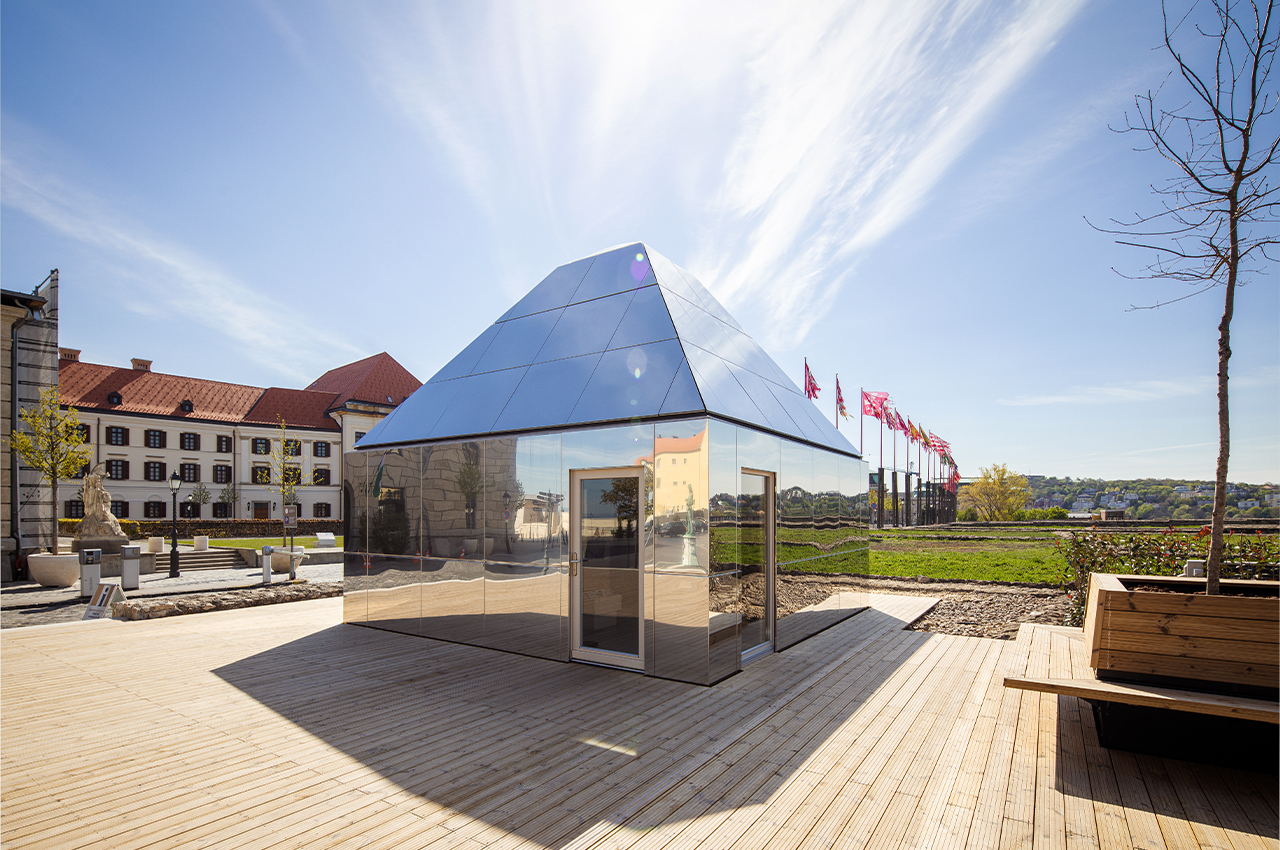 The Hello Wood team describes the choice behind the structures’ mirror-cladding, “Aiming for a booth that stays low-key in the atmosphere of the Buda Castle resulted in the use of reflective, glassy material and an almost perfect cube. Not even a visible door handle, the so-called Mirror Pavilions look natural in the setting of this historic place.” 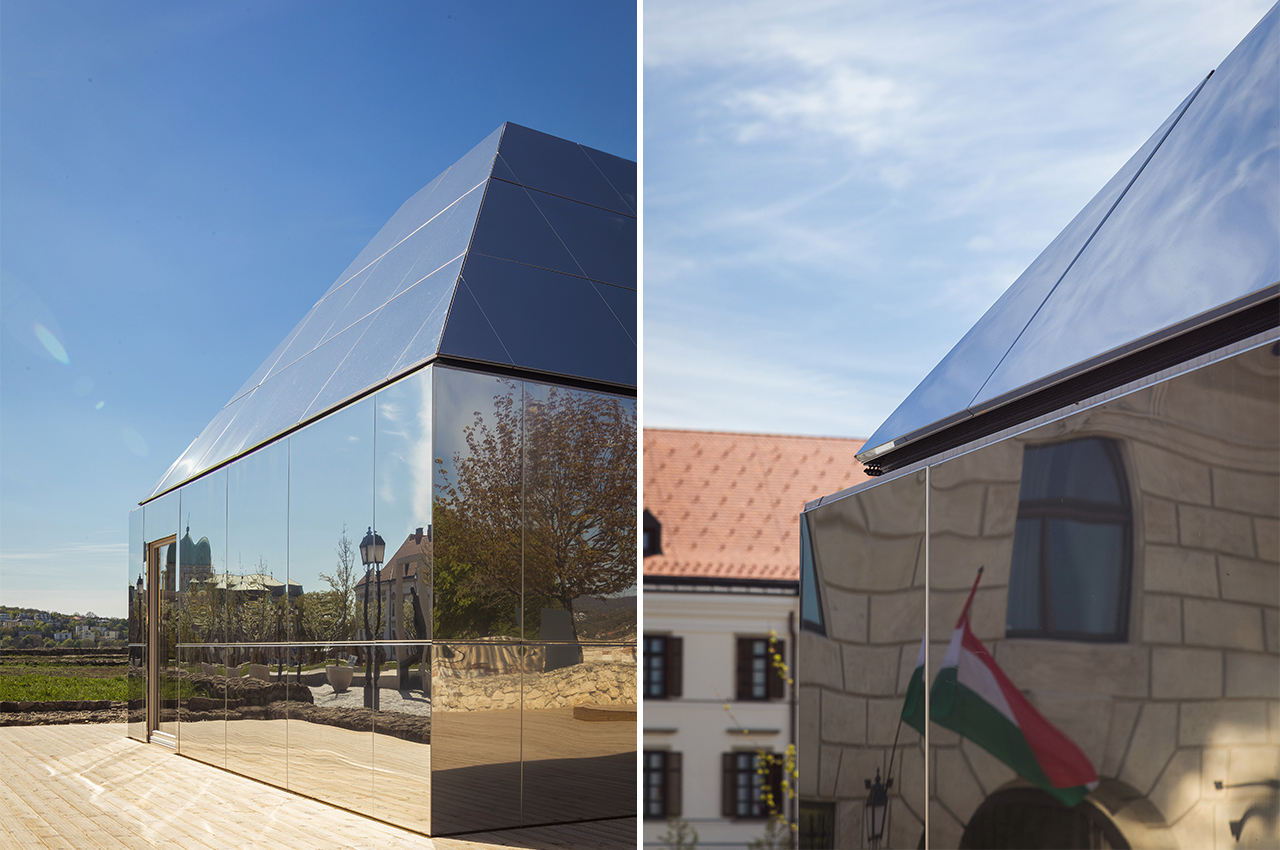 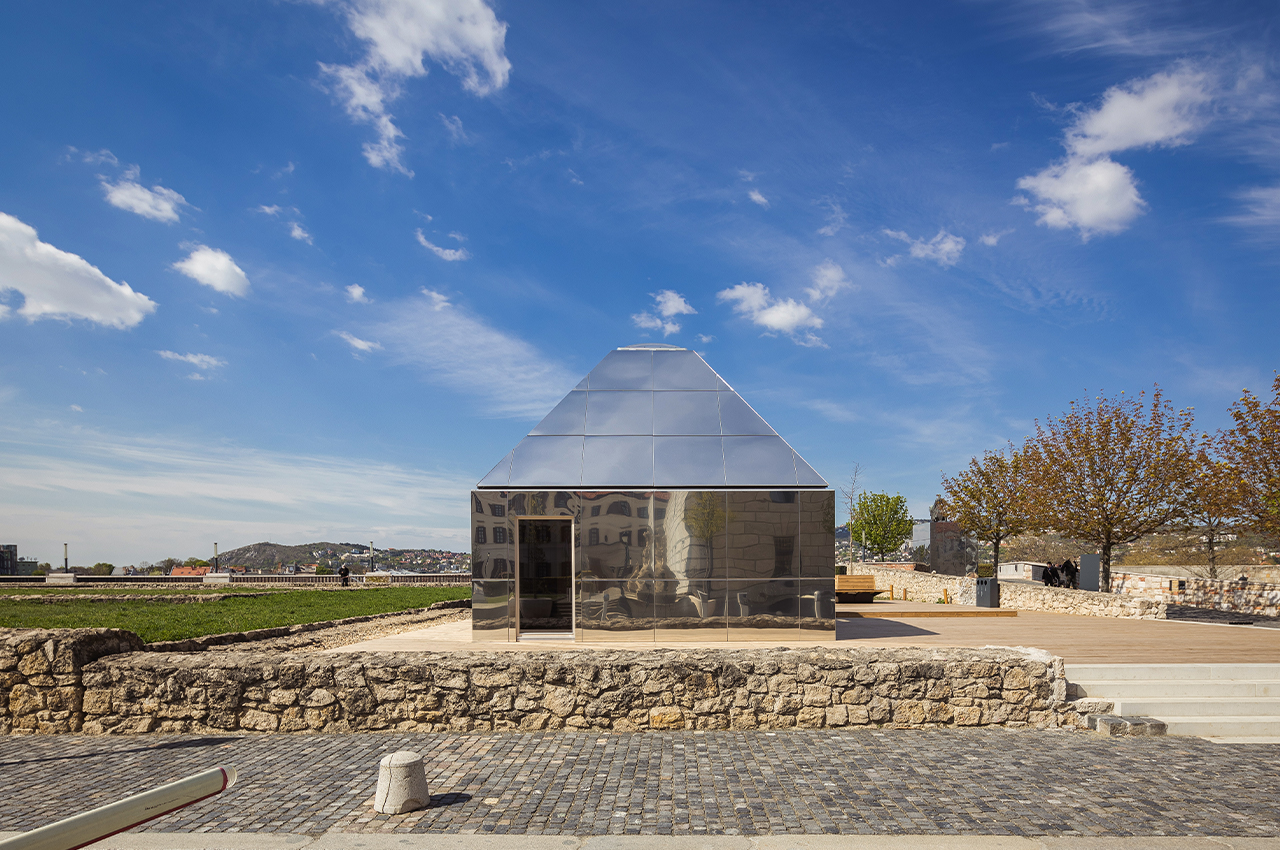 While the two different structures keep different silhouettes, the outdoor cladding and interior paneling remain congruent. In contrast to the cold, metallic feel of the exterior mirror-cladding, the interior walls of each structure find warmth and brightness with natural pine plywood paneling. Then, an overhead skylight drenches the indoor spaces with natural light, emphasizing the structure’s homogeneous appearance. 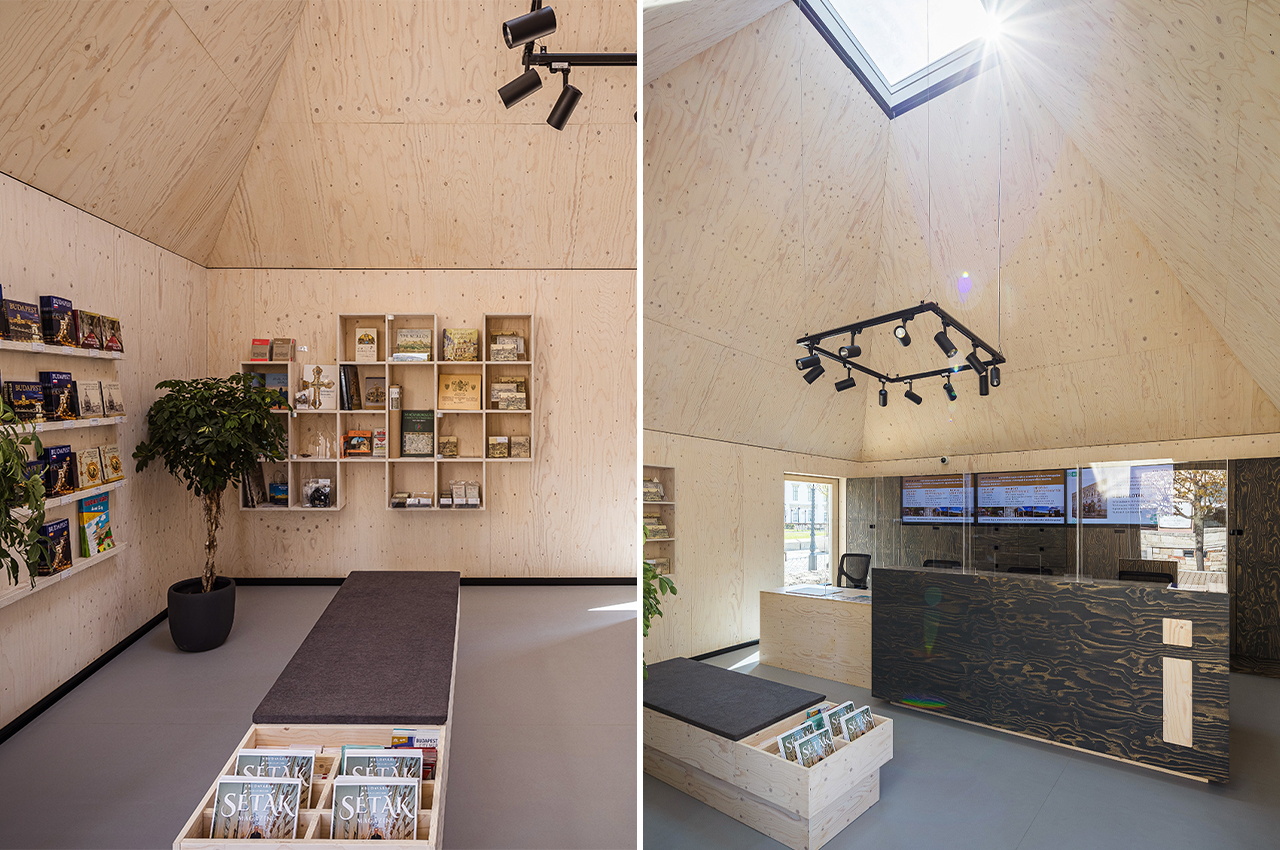 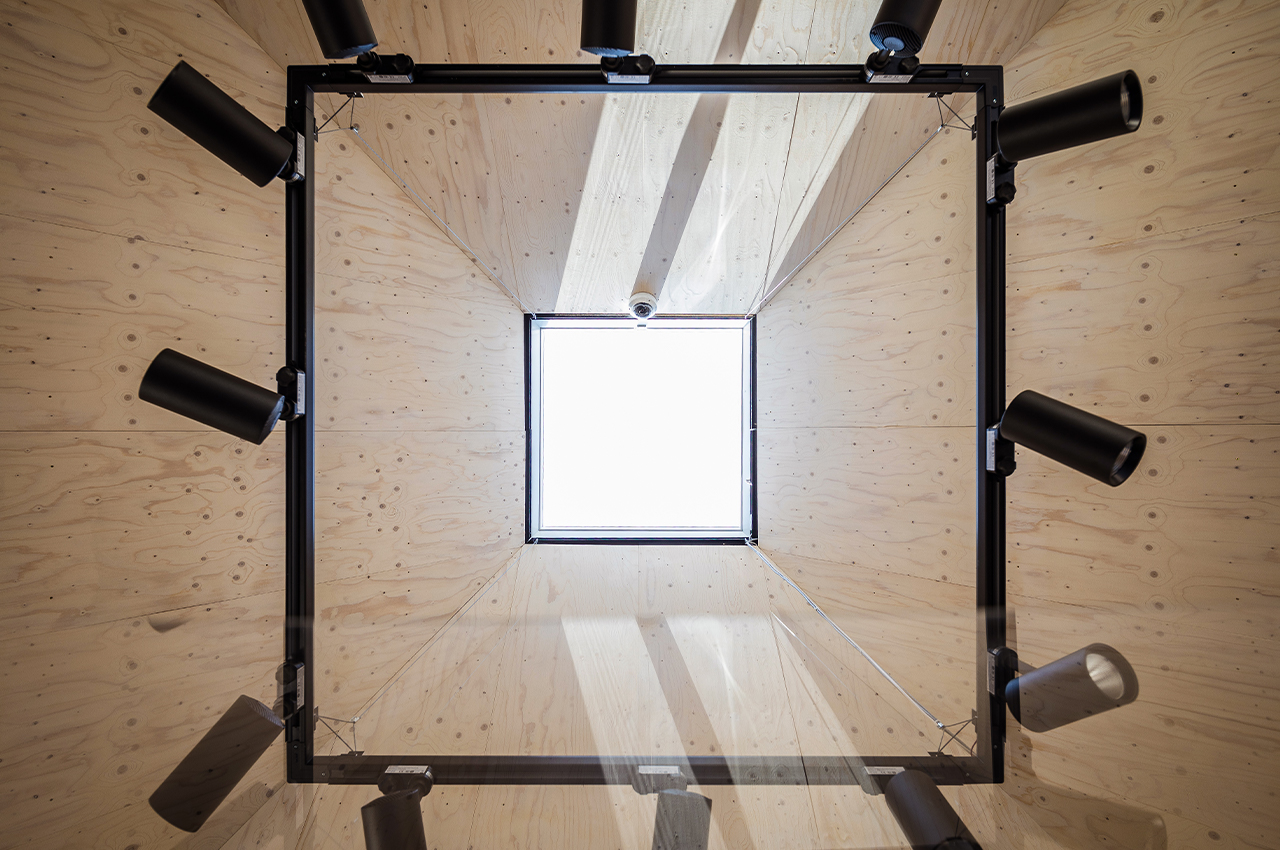 An internal skylight brightens the Infopoints’ natural pine plywood paneling and creates a warm retreat in contrast to the cold, reflective exterior. 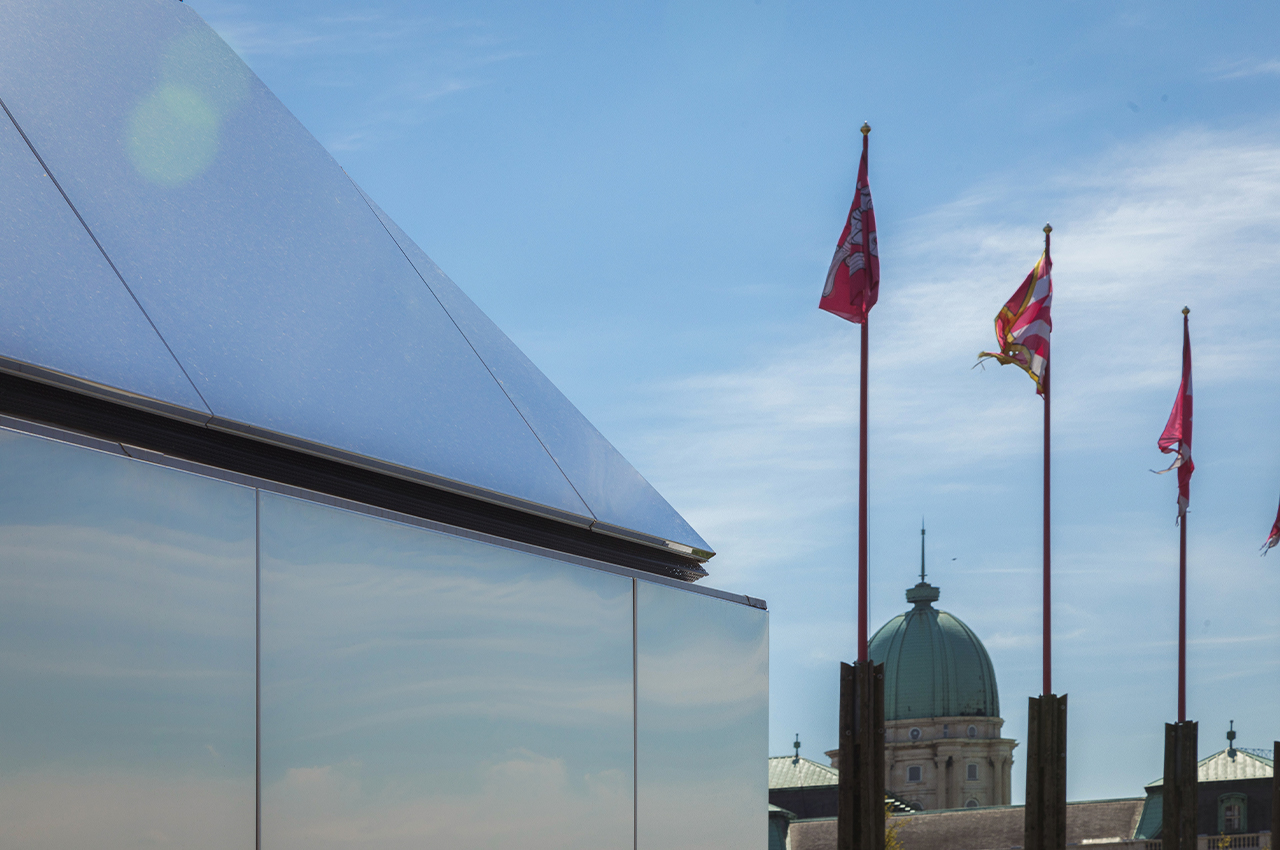 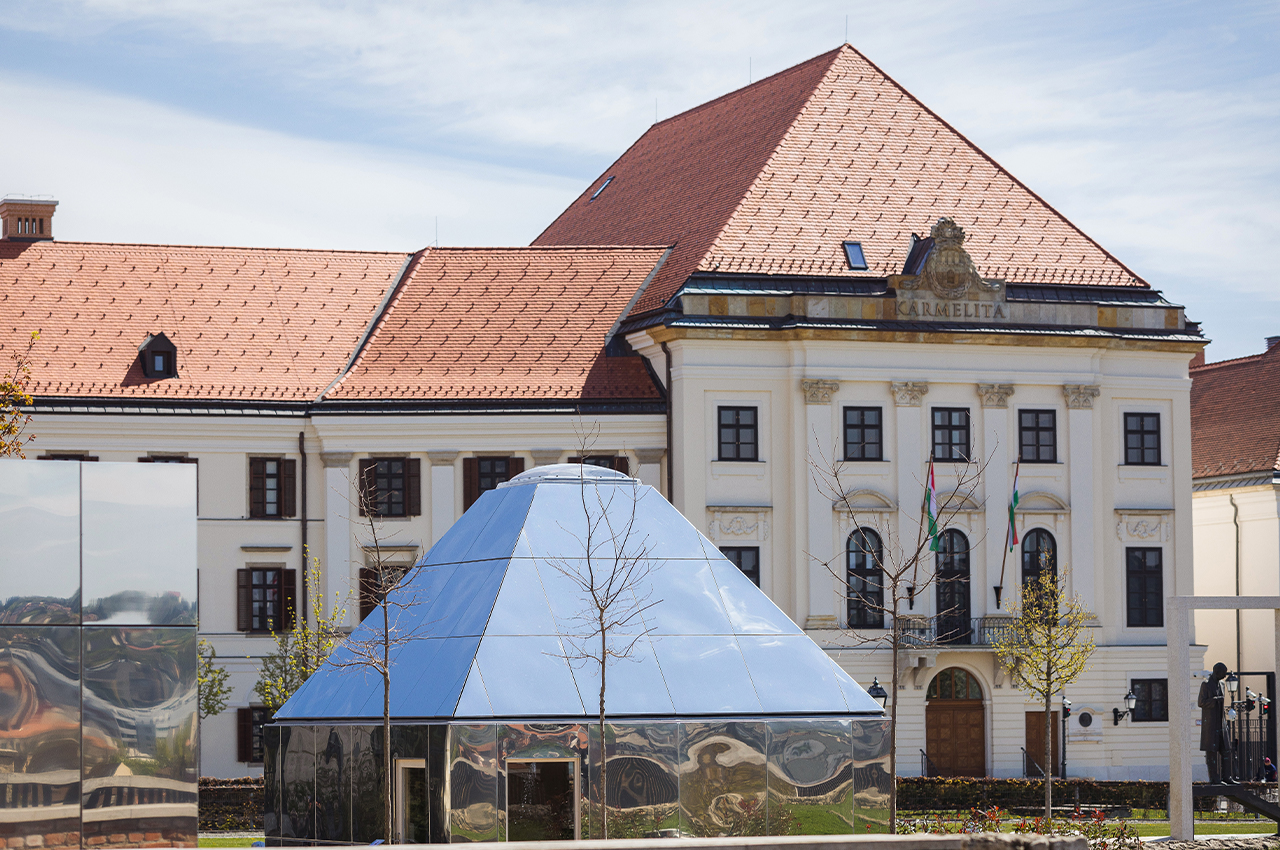 The architects at BLOKK and Hello Wood found harmony between the Buda Castle and the Infopoint structures by keeping the accessory building’s shape similar to the castle’s. 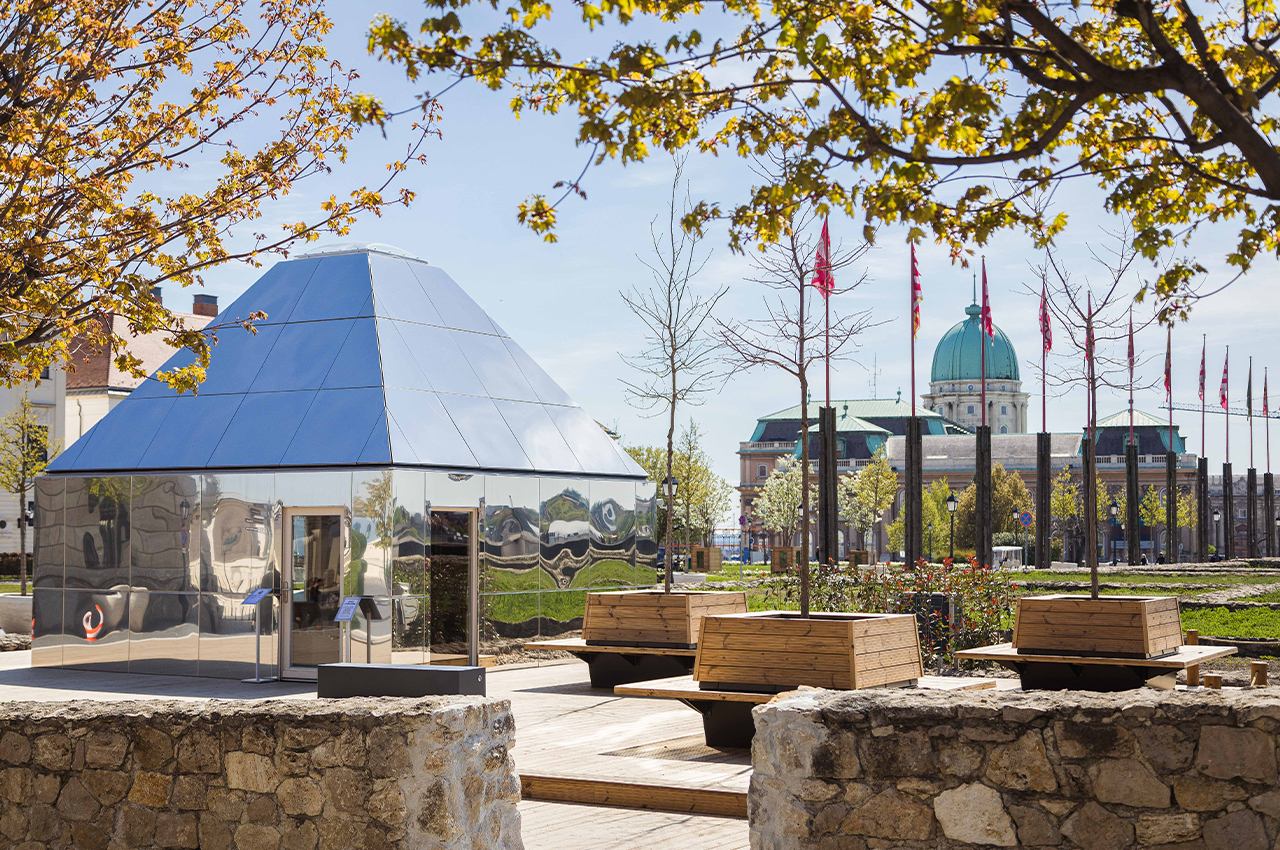 The Spinning Coffee Table is a misnomer since it’s the legs that actually spin. Designed to be fun yet functional, each leg is made of…

That’s one interesting Poke-stop! I mean chapel! I feel like I’ve gone on a pilgrimage to catch Pokemon given that each PokeStop is a religious…

This half-glass, half-steel cabin is designed with naturally insulating material to brace all elements

The Metal Lark is a half-steel, half-glass residence designed and built by Sala Architects as a multi-generational family holiday retreat. In Northern Wisconsin, positioned somewhere…