Contrary to popular belief, IKEA wasn’t always the flat-pack furniture and home-decor giant you see it to be today. Sure, it was founded by Swedish businessman Ingvar Kamprad back in 1943, but as a mail-order sales business that expanded into pre-assembled furniture five years after it was founded. However, the fateful event which radically altered IKEA’s brand ethos (and also its fortunes) can be traced back to a regular day in 1956 when Gillis Lundgren (one of IKEA’s employees at their first-ever store) was trying to load an IKEA table into the back of the car for delivery. Realizing that it was WAY too bulky to fit cleanly into the car’s boot, Gillis removed the table’s legs, effectively reducing it into smaller, easier-to-pack portions. Until that moment, the young company only offered pre-assembled furniture… but Gillis’ clever lifehack took the work-in-progress formula of a ‘supermarket for furniture’ to the next level. The IKEA flatpack was born.

Ever since that innocuous day in 1956, IKEA has firmly doubled down on being the low-risk, low-cost destination for furniture that you can assemble yourself – a philosophy that’s allowed them to expand to 60 countries, cementing their position as the world’s largest furniture retailer since 2008. Take a trip to your nearest IKEA and you’re sure to return with something practical, affordable, and a little on the chic side of ‘basic’, but a look back through 70 years of IKEA design tells a wilder story: an illustrated tale of style innovation, retro trends, the rise of the Scandi lifestyle, and a flatpack living room that would evolve across generations.

This wild compilation, courtesy HouseHold Quotes, condenses over 70 years of IKEA’s styles into a short 90-second video. Household Quotes scourged through archives of IKEA catalogs for classic living room pieces from the past 7 decades, meticulously creating digital renders of IKEA’s modern living room through the ages! 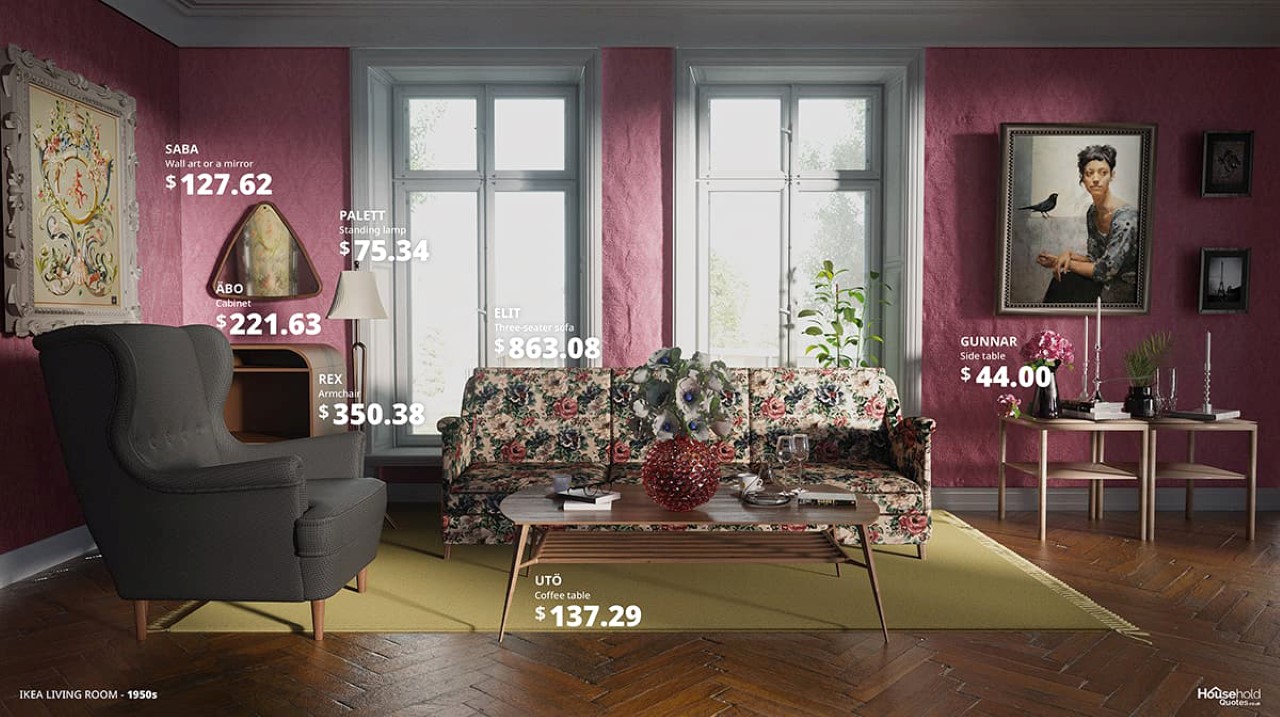 The first IKEA store opened in 1958, but it started as a mail-order concern. Customers would send off a completed coupon from their IKEA catalogs – which was mostly written by the company’s founder, Ingvar Kamprad. The centerpiece of our 1950s lounge is a “beautiful elm” UTÖ table that seems purpose-built to store incoming catalogs and lifestyle magazines. Although that PALETT lamp is a low-key talking point, too. Available in ox-blood, bright blue, pigeon grey, or plain-old black, the PALETT’s palette illustrates the story-telling capacity of IKEA’s products. “Nowhere else would you be able to find such a stable and beautiful lamp at such an outstanding price,” yells the brochure in true 1950s salesman parlance. 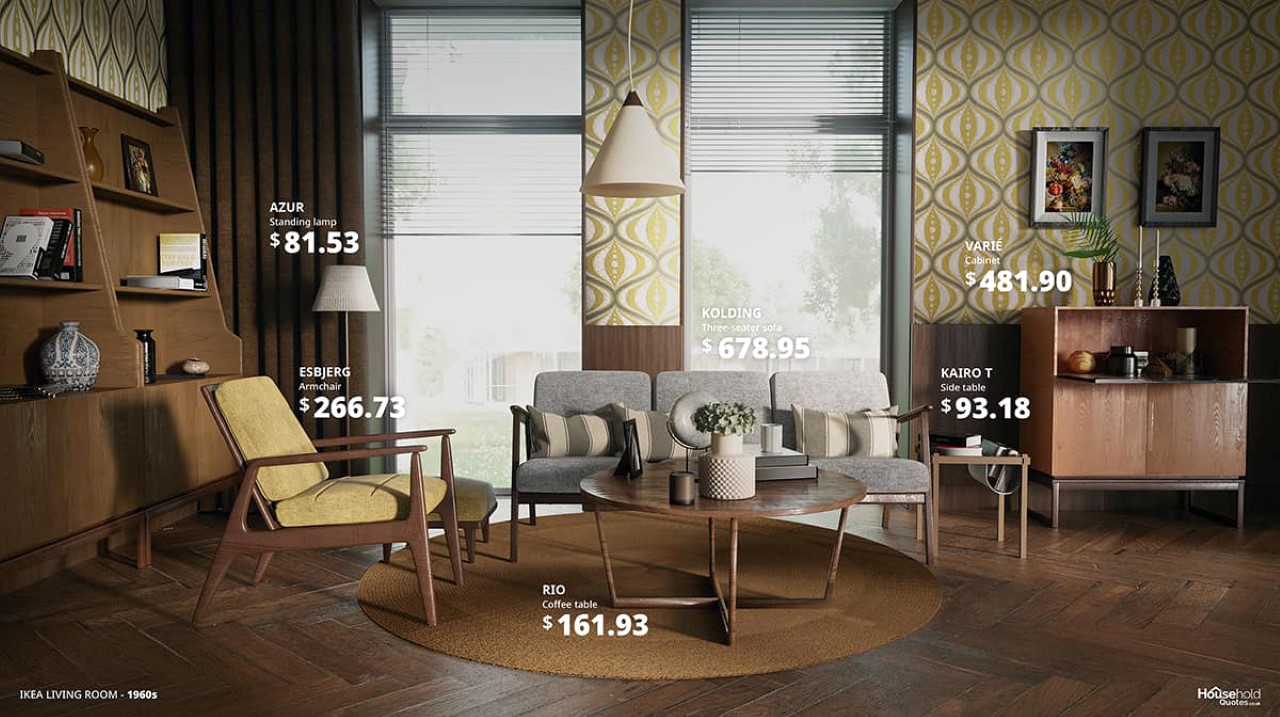 Into the Mad Men era, furniture stood up on its legs to allow the Hoover-buying public to reach every last ball of floor fluff. That RIO coffee table is very much for company rather than catalogs. The plastic-treated teak circle-top allows guests more legroom (we’re told), following the design by Arne Wahl Iversen, a young Danish designer who specialized in what we might call “office casual.” You’ll also note the atom-age spin of the helixed wallpaper and circular GYLLEN rug. But the science isn’t so hard: the “soft and snug” GYLLEN has “long fringes,” its “delicious color scale” created with high-quality dye for a “lasting luster.” 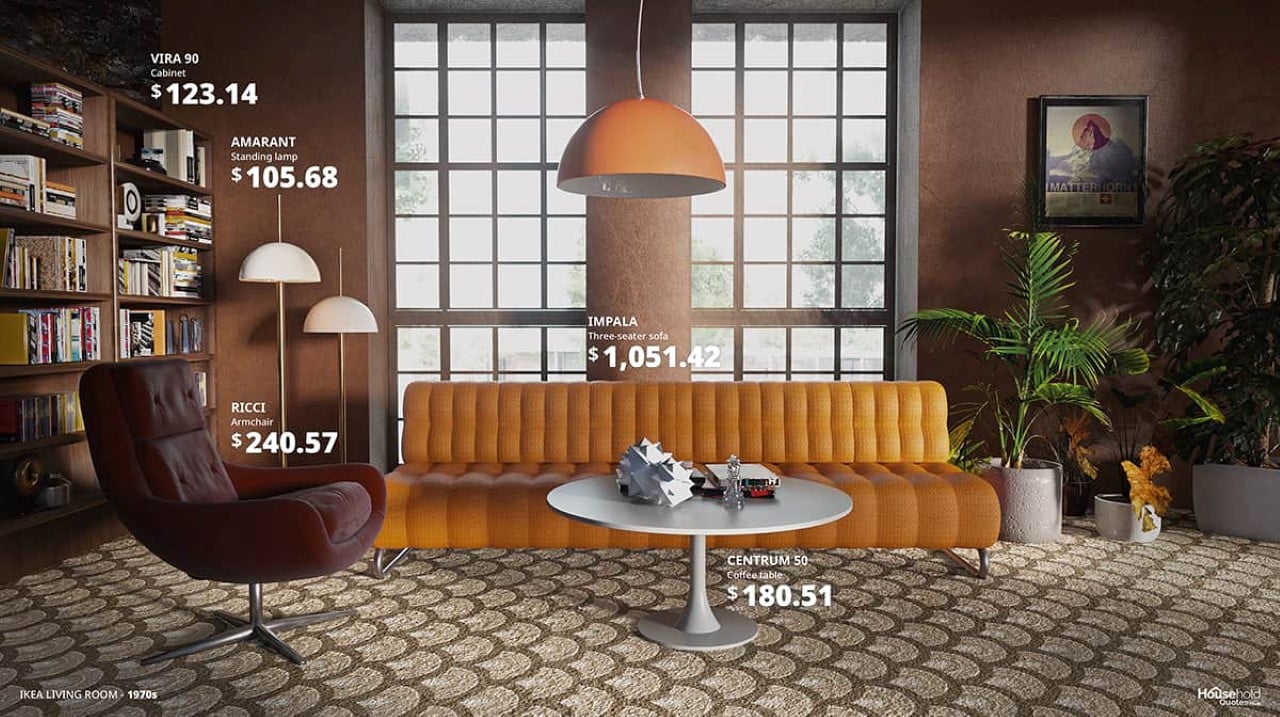 Say what you will about 1970s style, but no other decade was bold enough to give us the IMPALA sofa. Believe it or not, the IMPALA’s designer was the same man who created the BILLY bookcase: Gillis Lundgren, who joined IKEA as its fourth employee in 1953. Lundgren was also the same young man who unscrewed that historic LOVET table, bringing flatpack furniture into the mainstream. (The coffee table pictured here is the fiberglass/polyester CENTRUM 50). That AMARANT standing lamp is also a bit saucy, and decidedly 1970s. A nickel-plated stem, crowned with white or orange acrylic plastic, it offers a pull switch and the lamp can be taken apart and reconstructed as a table lamp if preferred. 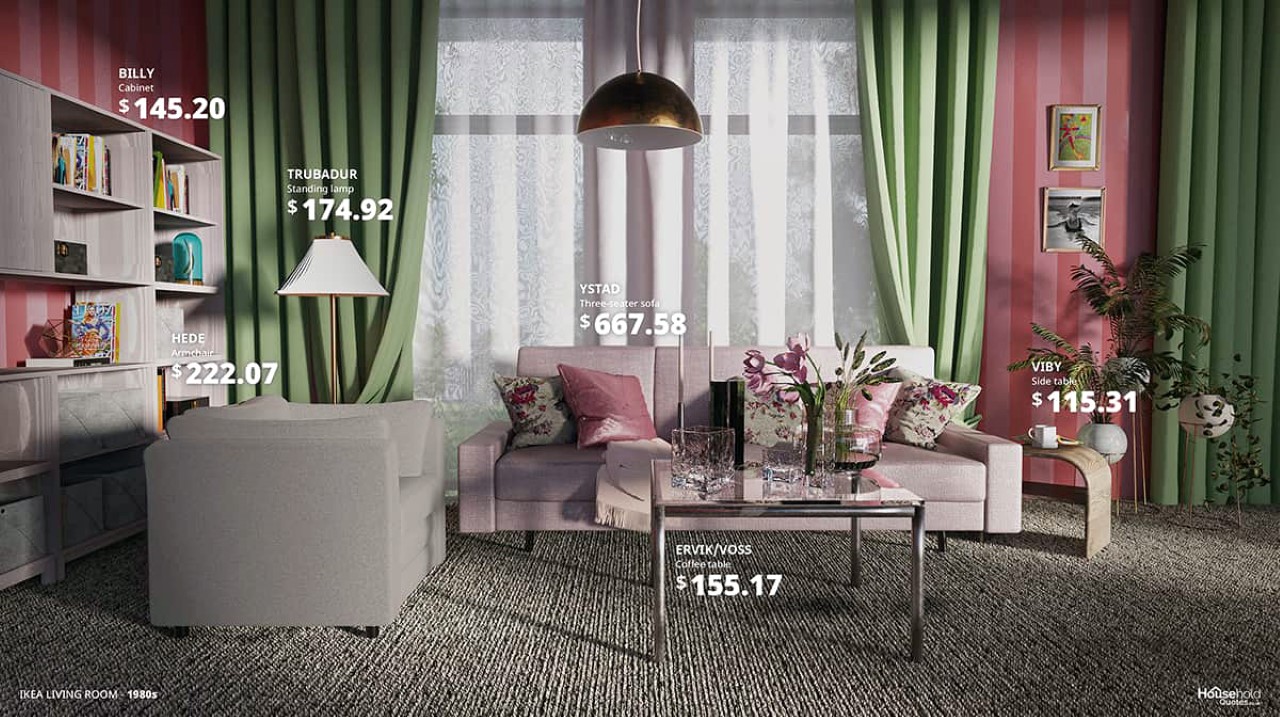 Yes, that’s a BILLY – “Sweden’s most-purchased bookcase” according to the catalog. In 1986, the bookcase was available with an oak veneer or nut-brown glaze, with five design alternatives. Having debuted in 1979, by the time of its 30th anniversary the BILLY would be produced at a rate of 15 bookcases per minute, and the 41 million units sold would have formed a wall 70,000 kilometers long. However, the BILLY also marked the ushering in of a more conservative period in IKEA design. Our 1980s IKEA living room is something of a nightmare flashback: the bland HEDE armchair and YSTAD sofa fading into the background next to the faintly more risky rattan VIBY side table. 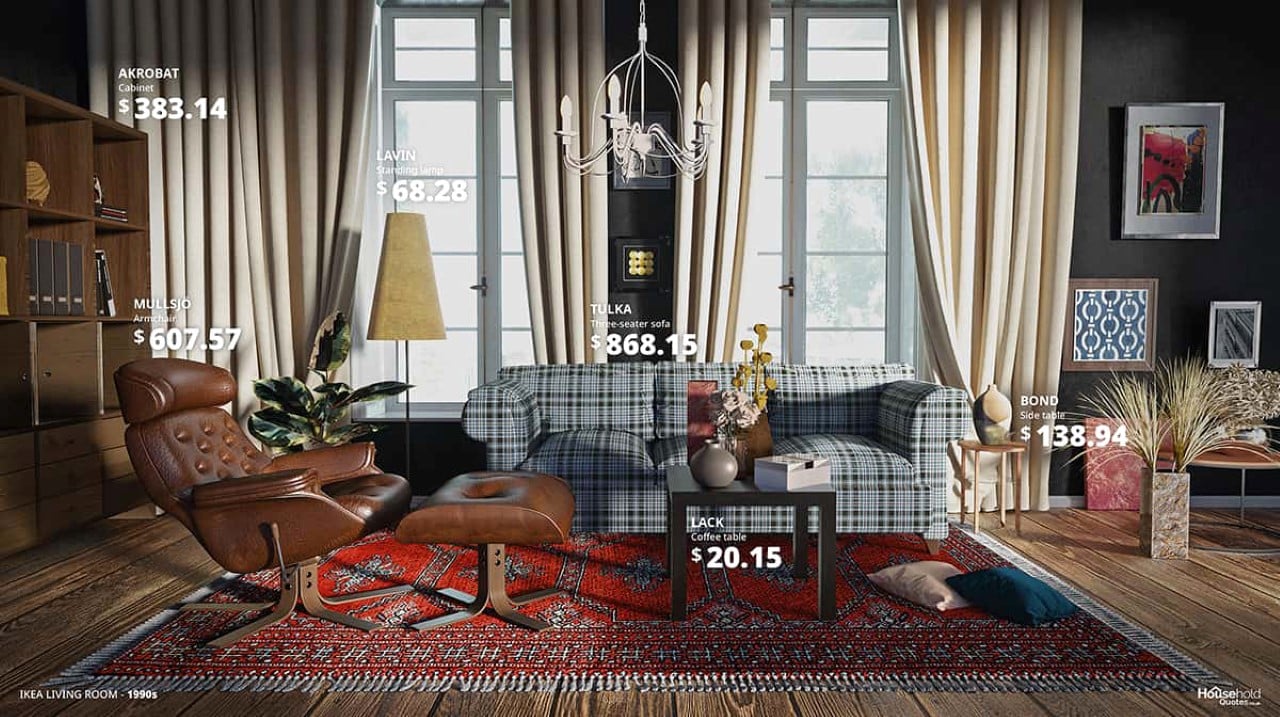 Nobody knew what they were doing in the 1990s, style-wise. But IKEA’s latest lines were at least comfortable and practical. Who hasn’t got lost on a TULKA sofa? (Smelling like three decades of dog at the moment of writing.) The steel and leather MULLSJO was a bolder (failed) style experiment, but no less comfy. The RÄCKE picture frame is recent enough and gaudy enough to be a thrift store regular in the 2020s. It was available in black or white lacquered metal with a glass front. But the real ‘take-home’ from our 1990s IKEA lounge is the AKROBAT storage unit, which paired a sense of mid-century style with a chipboard skeleton that wasn’t breaking any backs. 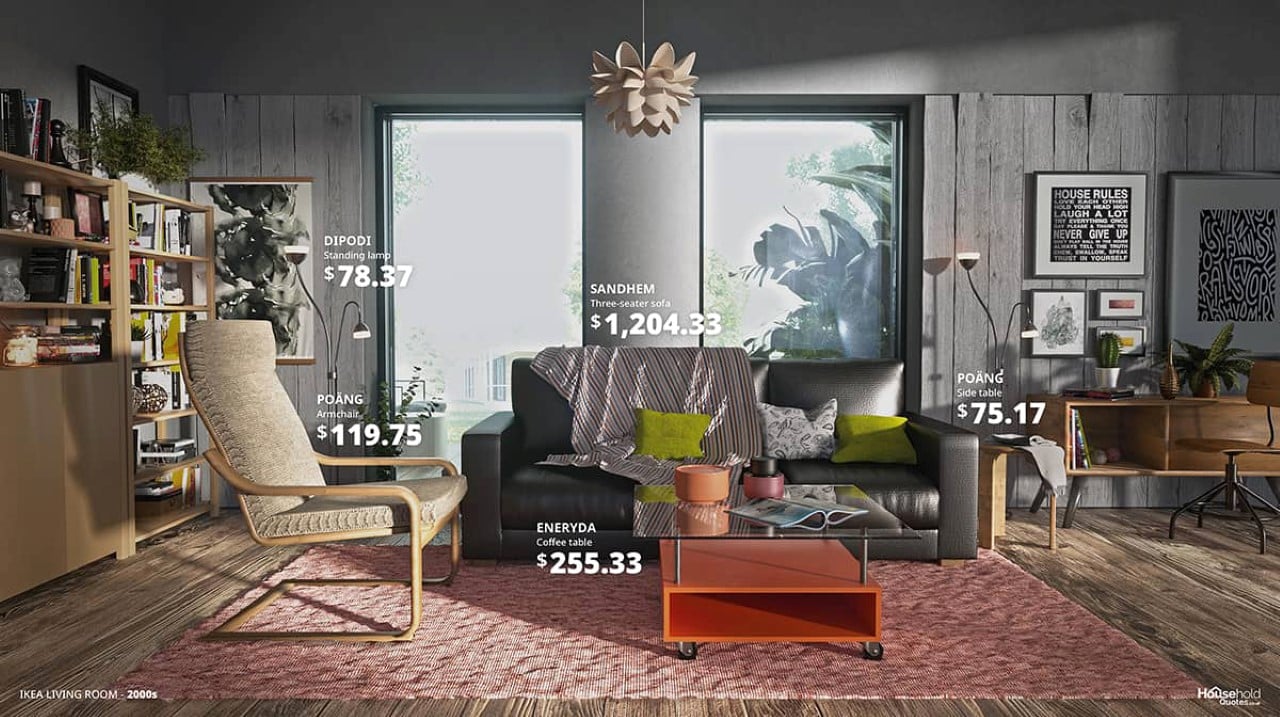 The design world got back on its feet at the turn of the 21st century. Noboru Nakamura’s revived 1976 POÄNG cantilever armchair offered a fine set of bare-bones around which home-makers could drape a range of fabrics and cushions. “A chair shouldn’t be a tool that binds and holds the sitter,” said Nakamura. “It should rather be a tool that provides us with an emotional richness and creates an image where we let off stress or frustration.” The double-pronged DIPODI lamp is more divisive. Bold and practical, or an uninspired misstep? And the ENERYDA table is definitely built for comfort, not speed: so strong and clunky you could even take it apart and rebuild your kitchen with it. 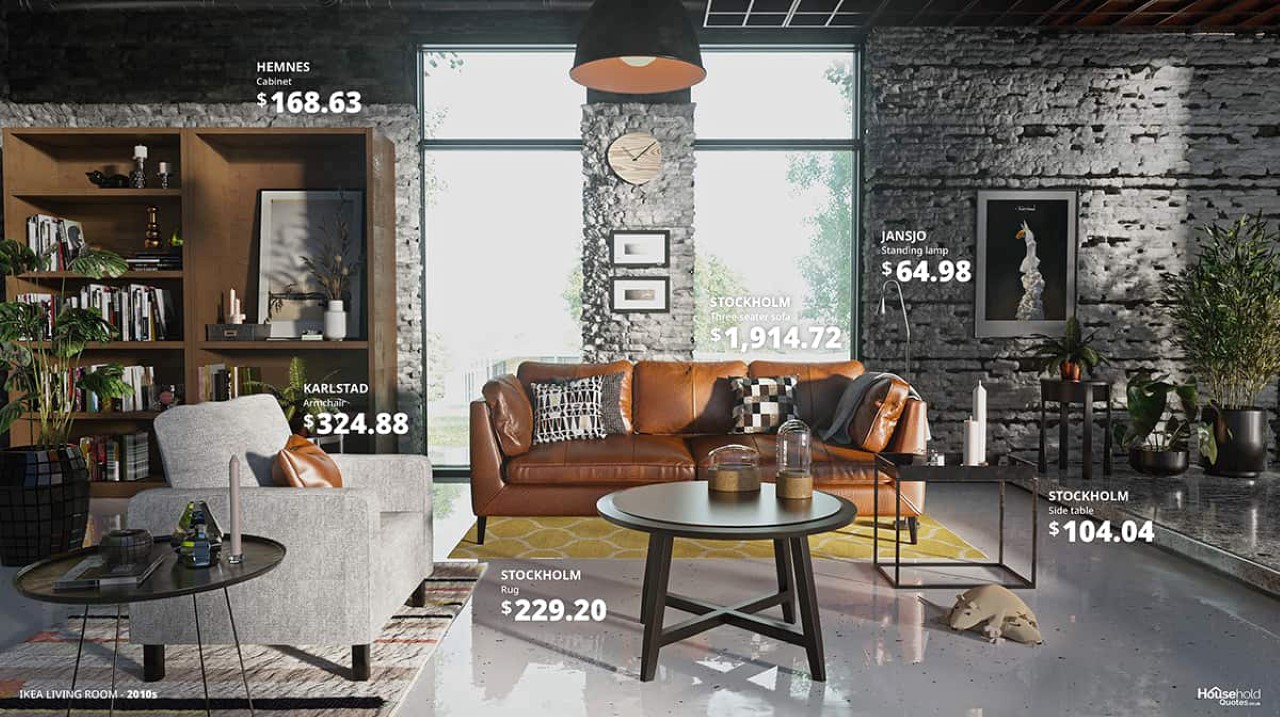 Now truly a global phenomenon, IKEA returned to its Swedish roots with the 2014 STOCKHOLM sofa. Three back cushions and just two bum cushions to share make it a distinctly socialist affair. “The full-grain leather becomes softer,” promises the catalog, “and acquires a darker tone in time.” This was IKEA’s first STOCKHOLM range in nearly a decade. That gorgeous wool rug is also from the STOCKHOLM collection, which is curated around IKEA’s higher-quality wares. The smooth-woven little number was “hand-woven by skilled craftsmen and fits perfectly into a day-room or under the dining table.” 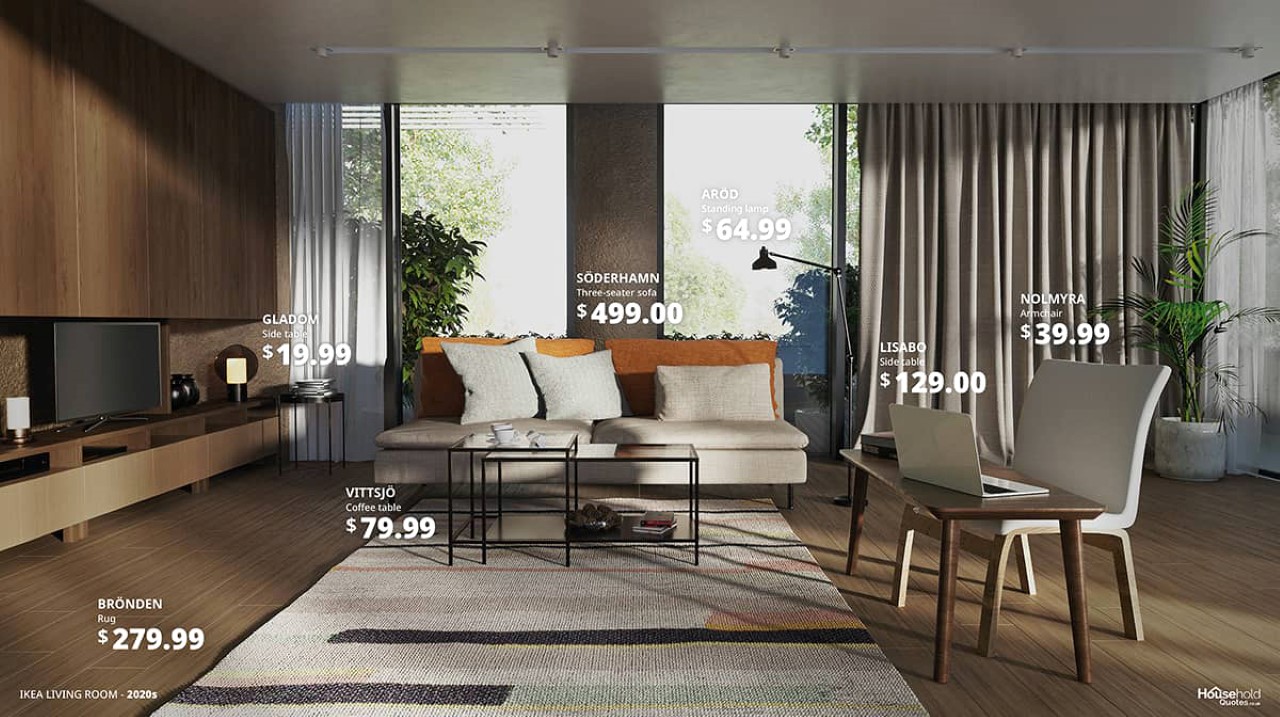 It’s the future. Clutter is outlawed. Sustainability is sexy. But the ghost of that 1950s salesman remains: the NOLMYRA armchair is “layered glued bentwood and is comfortable even for your wallet,” according to the Swedish brochure. The BRÖNDEN rug is fast becoming a modern classic, and is marketed on the ethics of its supply chain. And Johan Kroon’s VITTSJÖ table has a timeless geometric feel that wouldn’t be out of place on a Stanley Kubrick space station. “I chose materials that really bring out books, vases, and other favorite things,” says Kroon. “The straight, simple lines of the metal give the furniture a graphic expression and put an attractive frame around all your personal things.”

IKEA hasn’t always got it right. But the furniture brand’s unashamed dedication to low price points and intelligent design has made them a mainstay in the western home living room since the peak of mid-century modern design. You might not want to furnish your home from wall to wall with IKEA designs, but everybody has at least one piece that inspires them to say, “it’s only IKEA, but..”

Read the original article at HouseholdQuotes.co.uk

As a child, every time I opened a wall cabinet or wardrobe I expected to find an entry to Narnia. As an adult who is…

A chair that transforms into a desk setup offers purpose through its duality!

The designers behind DUAL, a multi-functional, compact desk chair, and table, believe that functionality and aesthetics go hand in hand – that for a piece…

Chair Inside A Chair

The TransPlastic series tells a fictional story: in a world made of plastic and synthetic matter, a fertile ground is laid for transgenic creations. Natural…