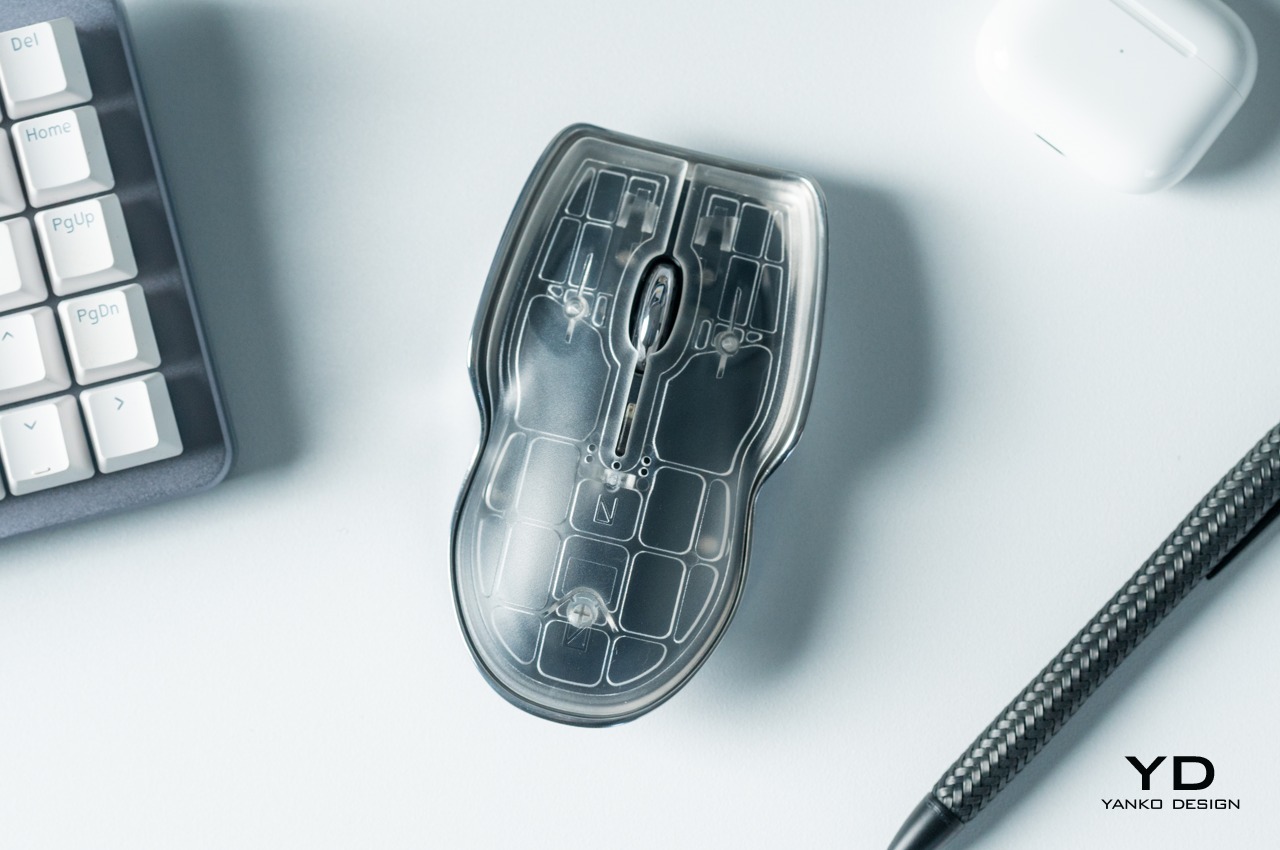 The Lunar Artefacts Pointer Instrument changes the way you think a computer mouse can look like and its easy-to-repair design completely changes the game. The lack of features for its price tag, however, could put off more advanced computer users.

Computers and their peripherals are probably the last consumer products that one would normally associate with beautiful design, especially if you’ve seen how these electronic contraptions looked in the earliest days of personal computing. Apple can perhaps be credited for making consumers not only more conscious of well-designed gadgets but also become more accepting of the price one has to pay for them. There has been a steady stream of designer products that try to add some visual appeal to computers and accessories but focus more on appearances at the expense of actual utility. Lunar Artefacts of London, however, wants to prove you can have beauty, functionality, and longevity, so we take the Pointer Instrument Lunar Optic model for a spin to see if it is really the only mouse you’ll ever need. 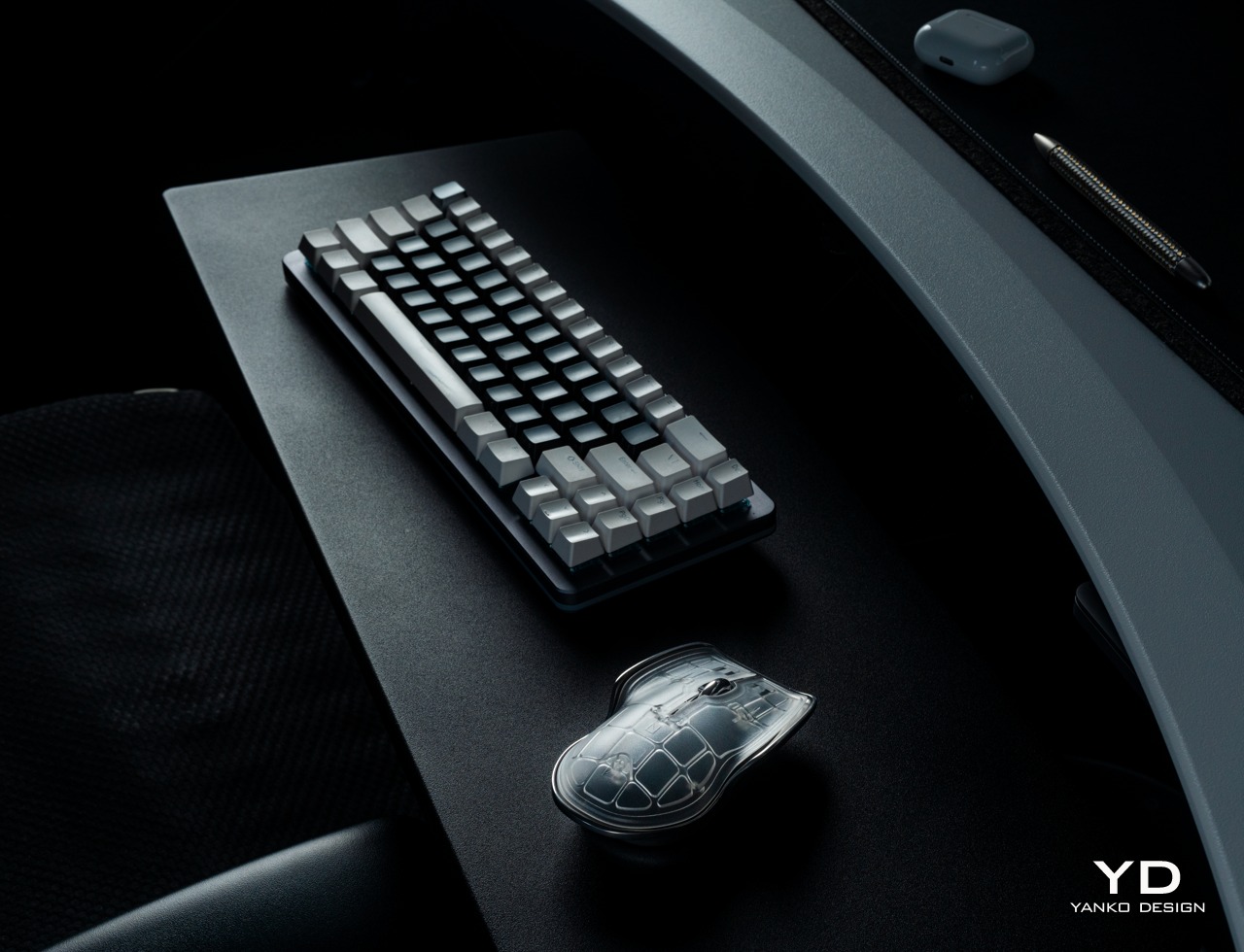 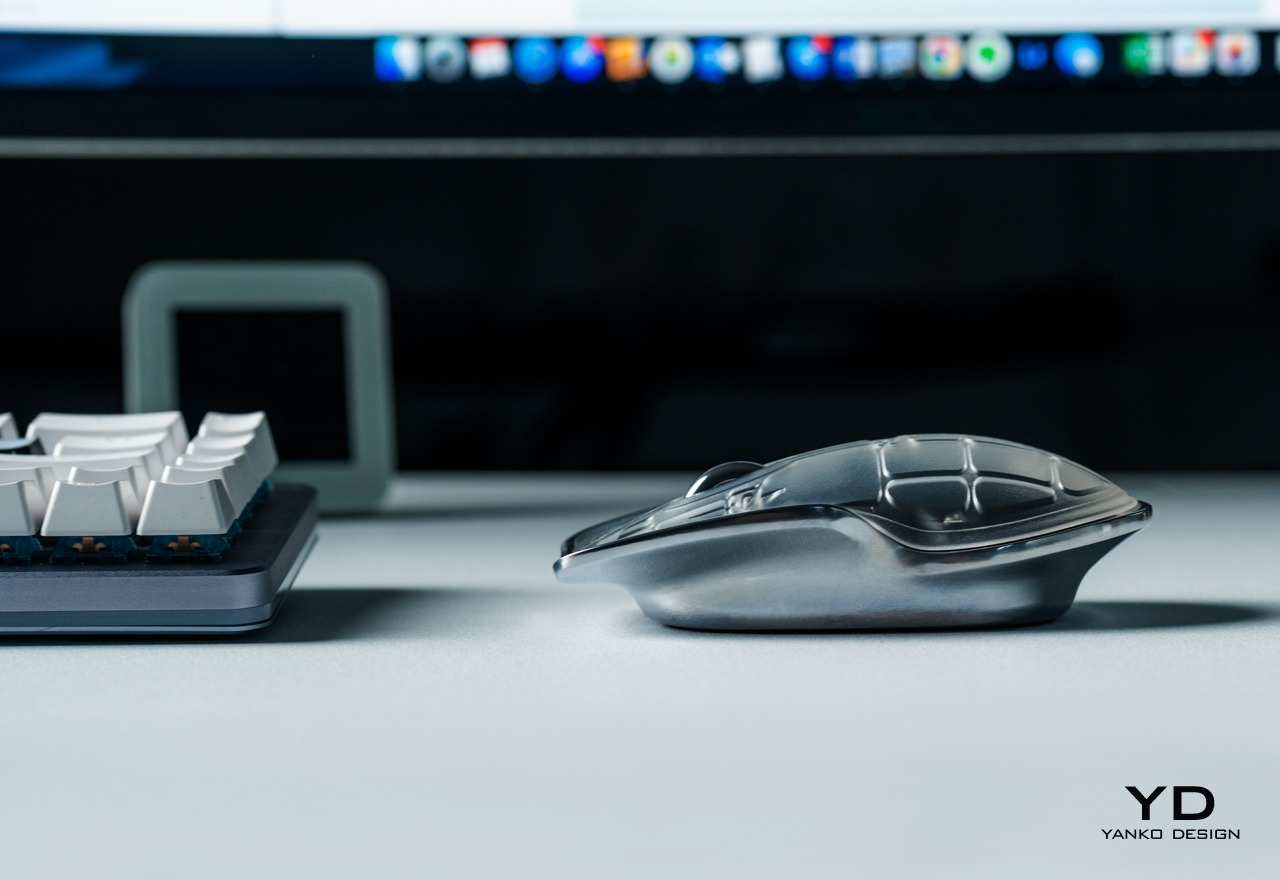 Lunar Artefacts compares its Pointer Instruments, its alternative name for a computer mouse, with the Corvette Stingray, and it’s clear that the device’s design is inspired by sports cars rather than other mice. The contours make it look like it was designed with aerodynamics in mind, and you almost expect it to glide over your desk with very little push. As we’ll see later, it is, in fact, designed to operate smoothly with very minimal effort, at least from your arm.

There are quite a few variations of the Pointer Instrument, depending on the material used for the top cover and the base. The Lunar Optic, for example, combines a translucent top that should delight technophiles and an aluminum base that is designed to be lightweight. Those who prefer a bit of heft can opt for the Solar Optic model that uses brass for its base instead.

The choice of leather for other models might be a bit controversial. Genuine full-grain leather is, of course, known for letting the skin breathe, but hands tend to get sweaty when using computer mice, regardless of the environment. It will also wear and tear over time, but that is something that Lunar Artefacts ironically encourages people to embrace. These materials are promised to age beautifully, and you can always replace them should they become unbearable to look at. 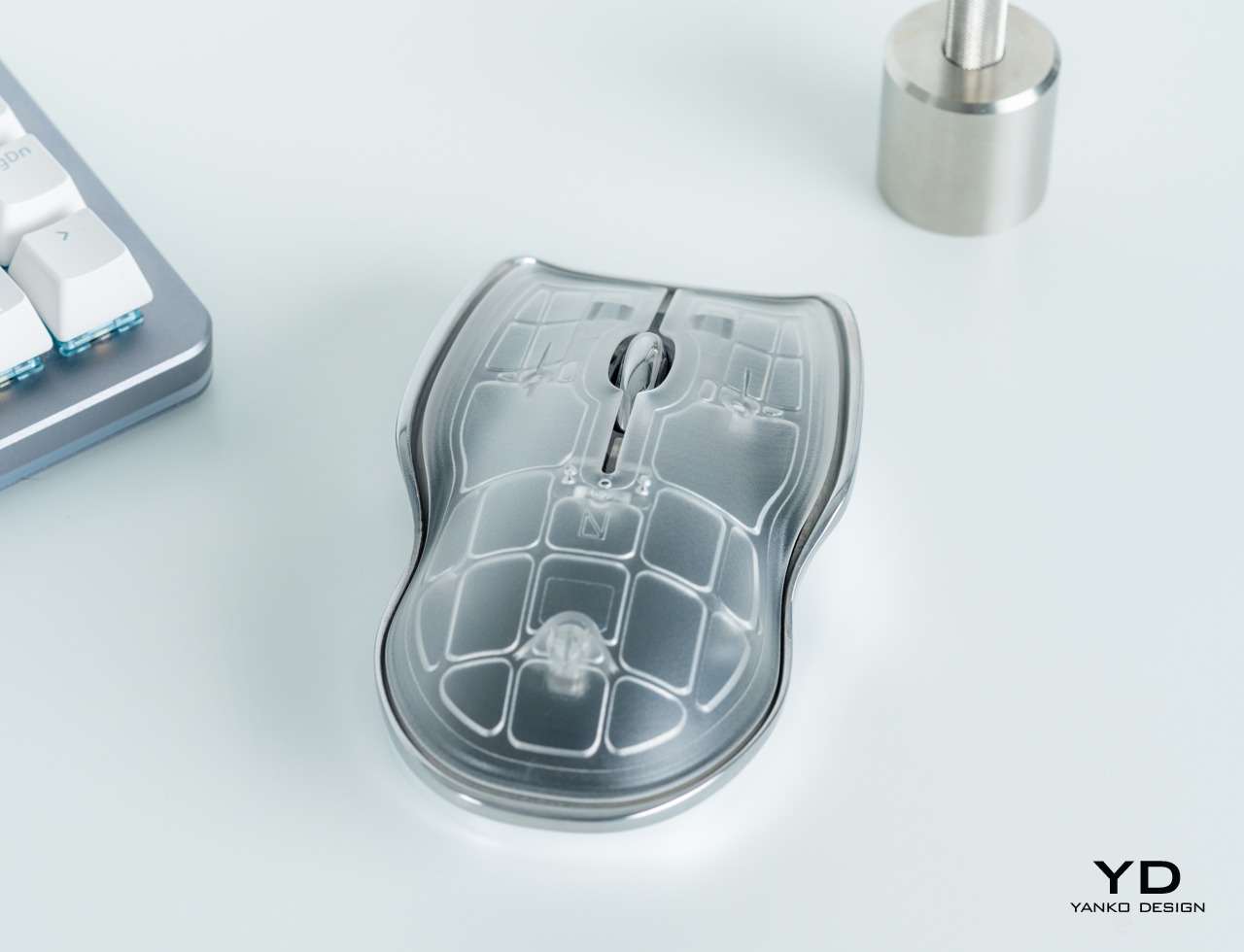 The Lunar Artefacts Pointer Instrument doesn’t look like your run-of-the-mill mouse, even when compared to some of the more esoteric gaming mice available in the market. That unique visual identity, however, does have consequences for the usability of the product and could feel alien in your hand at first. The company itself admits it will need a bit of getting used to, which could hamper your productivity for a while.

Lunar Artefacts insists that it’s worth the time you put into it, though, as it will supposedly improve your comfort over time. Unlike regular mice, you don’t need to grip the Pointer Instrument, and your hand is supposed to rest comfortably on the surface instead. The ambidextrous design of the mouse will surely be of comfort to left-handed users, but the rest of your fingers might feel at a loss where to rest.

Curiously, Lunar Artefacts sells an optional nylon Accessory Grip that basically mimics the shape of a gaming mouse. Unfortunately, that’s an added expense you might not be aware of, and it would have probably been better if it was included in the box, especially since the company admits that no one size fits all.

The designers did at least concede that different people have different preferences when it comes to how heavy or light they want their mice to be, especially when gaming is involved. The luminous aluminum shell that most closely resembles the dark hues of computer mice weighs in at only 120 grams for those who have more precise motion control and prefer a lighter touch. At 195 grams, the brass shell has slightly more heft, offering a solid feel that isn’t uncomfortably heavy. 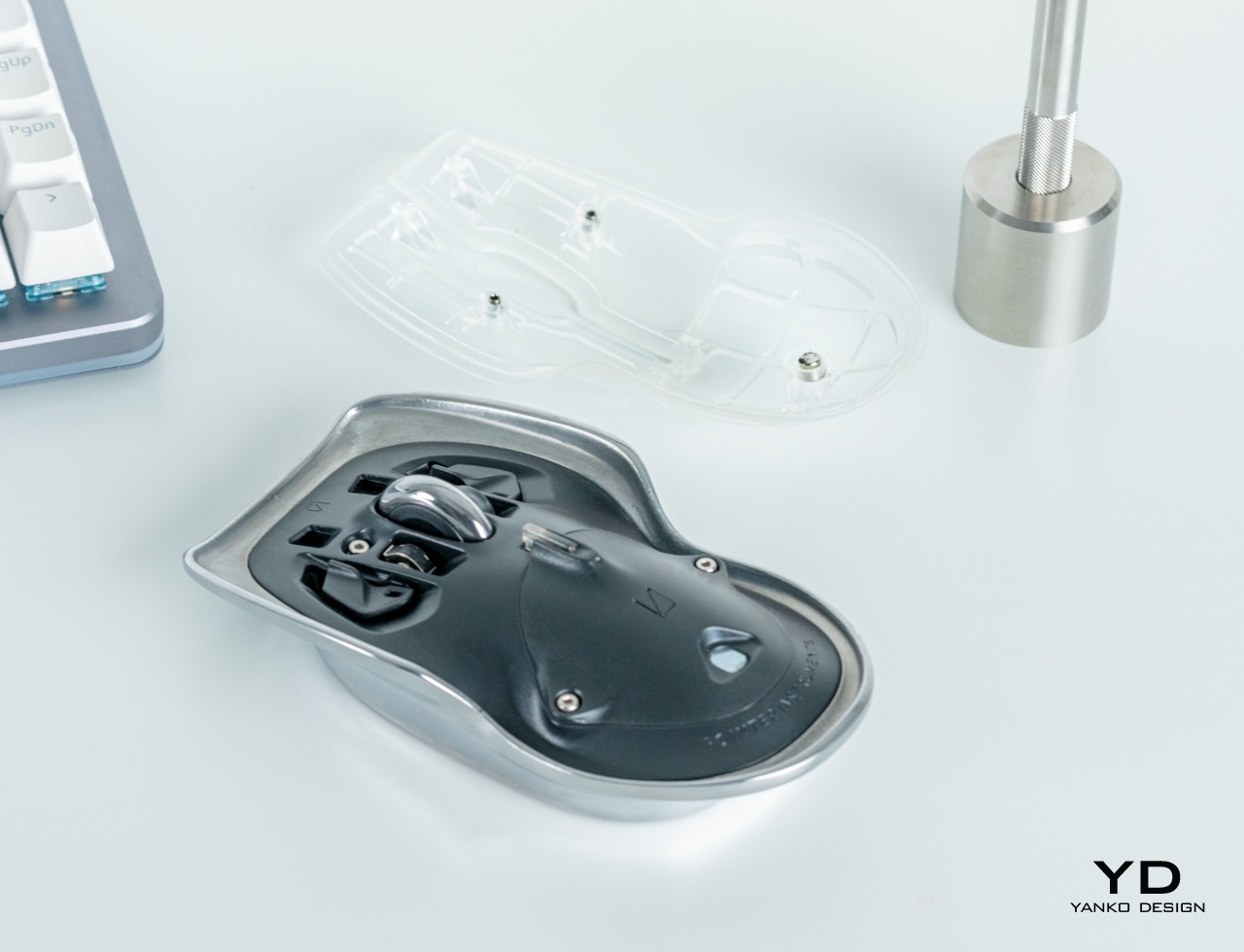 Designers today have become more aware of the ecological ramifications of their products, and many have made it their mission to create sustainable designs that are also accessible to regular people. When it comes to consumer electronics, how easily repairable or recyclable products are have become major selling points, and the Pointer Instrument probably gets top marks for it. The box it comes in can even be reused as a photo frame, even though it might not be the best way to show off your face. Fortunately, the packaging uses recyclable materials, so it still scores points even if you decide not to use it as the designers intended.

Many companies and designers boast about products sourced from sustainable or environment-friendly materials, but there are times when the use of plastic is almost unavoidable. Plastic does last a long time, but the problem starts when it begins to show its age or needs to be replaced. Lunar Artefacts does have a Lifetime Repair Service program that could handle the proper disposal of such materials, but it still puts a question mark on the Pointer Instrument’s overall sustainability.

Although there might be some debate about how sustainable the materials are, they are at least meant to last longer than your usual plastic. More importantly, however, almost every critical part of the mouse except for the circuit board can be easily replaced. Lunar Artefacts even has a handy video guide on how to disassemble and reassemble the Pointer Instrument, assuring buyers that almost anyone can do that.

The slight hitch to this proposition is that you will have to know where to buy those replacement parts. Although those components might not be that difficult to find online, it would have been dandy if Lunar Artefacts itself sold those or at least connected customers to shops that sell them. 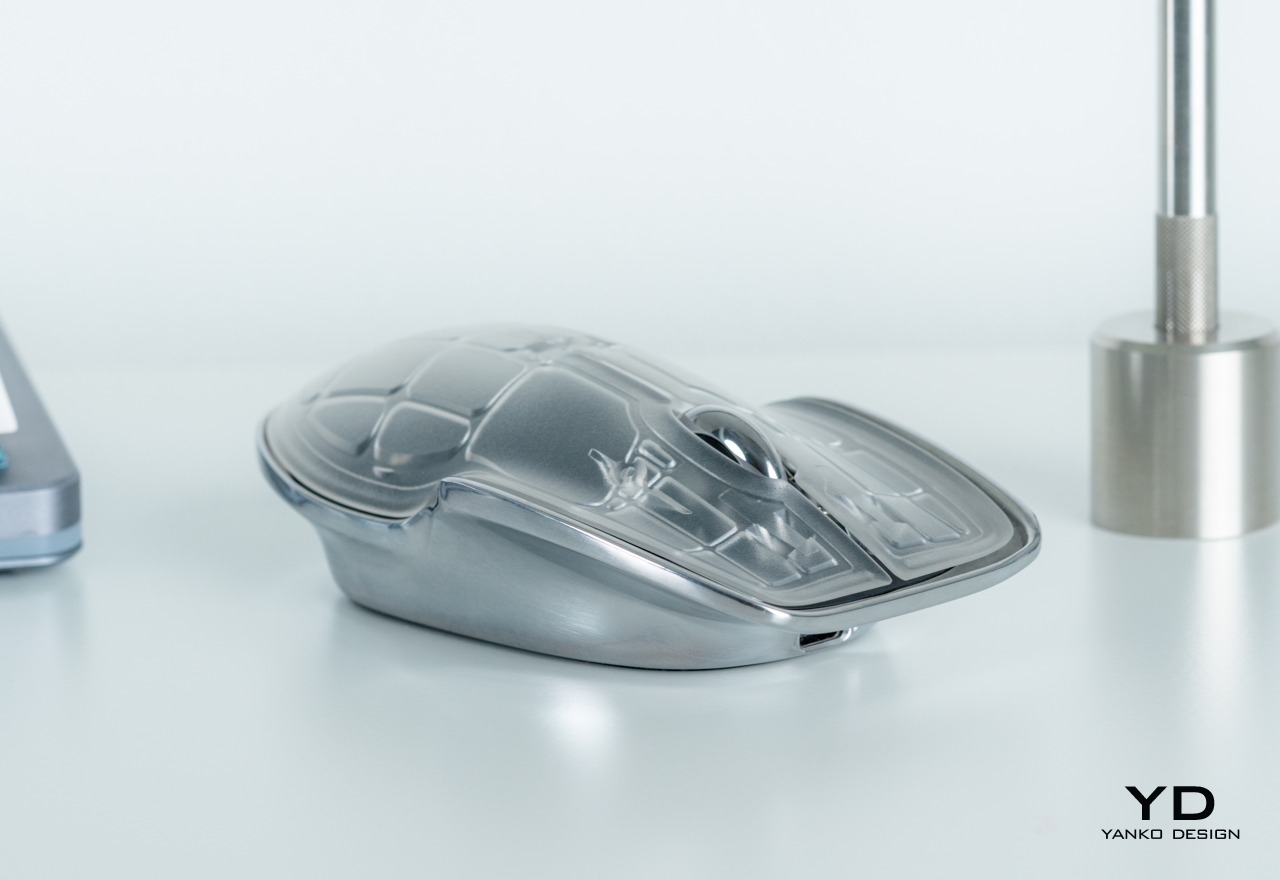 The Pointer Instrument has been likened to a sports car in design, but does it behave like a Corvette Stingray as well? It’s definitely not a slouch, offering up to 3000 DPI precision, but that’s just about it. If a mouse’s performance is to be judged by the number of buttons it has, including programmable ones, or the beating it can take from a trigger-happy finger, this designer mouse might fail to impress.

It does have one feature that not all computer mice have, even the more expensive ones. It can be used on any surface, including glass or reflective materials that often throw off optical mice. You can, of course, still buy a leather mouse pad from Lunar Artefacts if you just want a matching set.

While it might lack buttons, the Pointer Instrument definitely doesn’t lack connectivity options. In addition to both Bluetooth and RF Wireless, you can also connect it using the USB-C cable that is also used for charging it. It even supports wireless charging if you have a Qi-compatible wireless charging pad large enough to hold it. 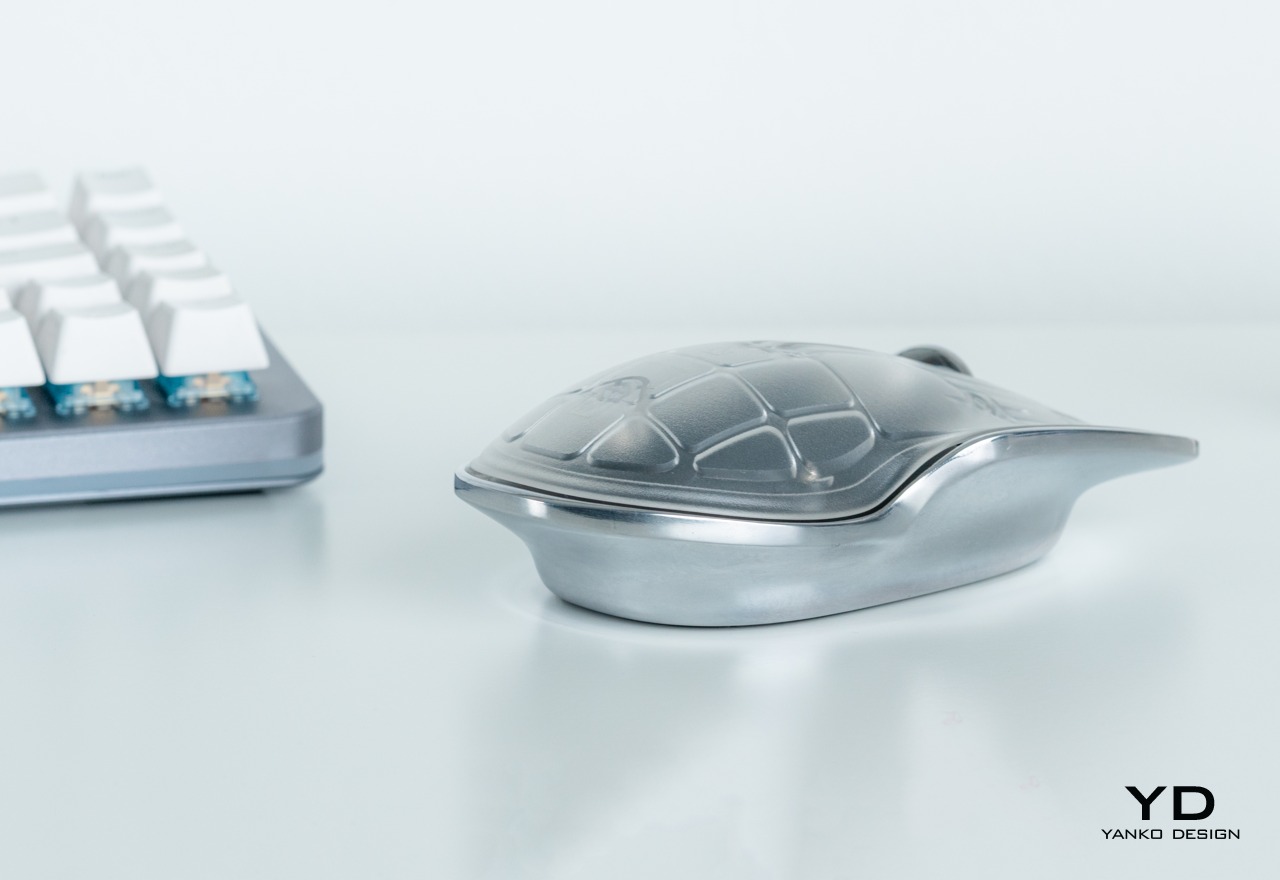 Designer products are often more expensive than their common retail counterparts, and not just because they’re designer products. In addition to the thought and extra care that’s put into them, the materials used also play a part in the overall cost of making the product. The Lunar Artefacts Pointer Instrument clearly has those marks, but the question is whether it’s worth that £155 ($200) price tag.

It’s a difficult question to answer and mostly depends on what you would use a computer mouse for. It will hardly perform as well as a dedicated gaming mouse and would easily wear out the buttons repeatedly, even if you could replace it again and again. There are also other ergonomic mice designed with a plethora of features that cost a lot less, though they definitely have nothing on the Pointer Instrument in terms of dapper looks.

Lunar Artefacts of London is challenging the concept of a computer mouse. Often considered expendable except by PC gamers, mice are often bought and discarded at rates higher than any other computer peripheral. While people can get attached to their keyboards and have them repaired as much as possible, mice are often just replaced, their discarded carcasses filling up landfills the world all over.

The Pointer Instrument turns that idea on its head, and the Lunar Optic model gives it a visual flair that could appeal to computer users that fancy transparent or translucent designs. Although the sports car inspiration might not stand the test of time, the Lunar Artefacts Pointer Instrument definitely will, as long as there are replacement parts available. At its price tag, you might want this to really be the last mouse you’ll ever buy, and, fortunately, it was built to be that way.

But even when the Lunar Artefacts Pointer Instrument does age, owners will find that it ages gracefully and beautifully as well. When the leather top develops scuffs, and when the aluminum and brass bodies start to grow patinas over time, the mouse begins to take on a more personalized appearance the differs from owner to owner, depending on how they use the device. This way, the Pointer Instrument becomes more than just a utilitarian mouse that you discard after it has served its purpose. It becomes, instead, a more visible and tangible record of your life, growing old along with its owner in an almost personal way. 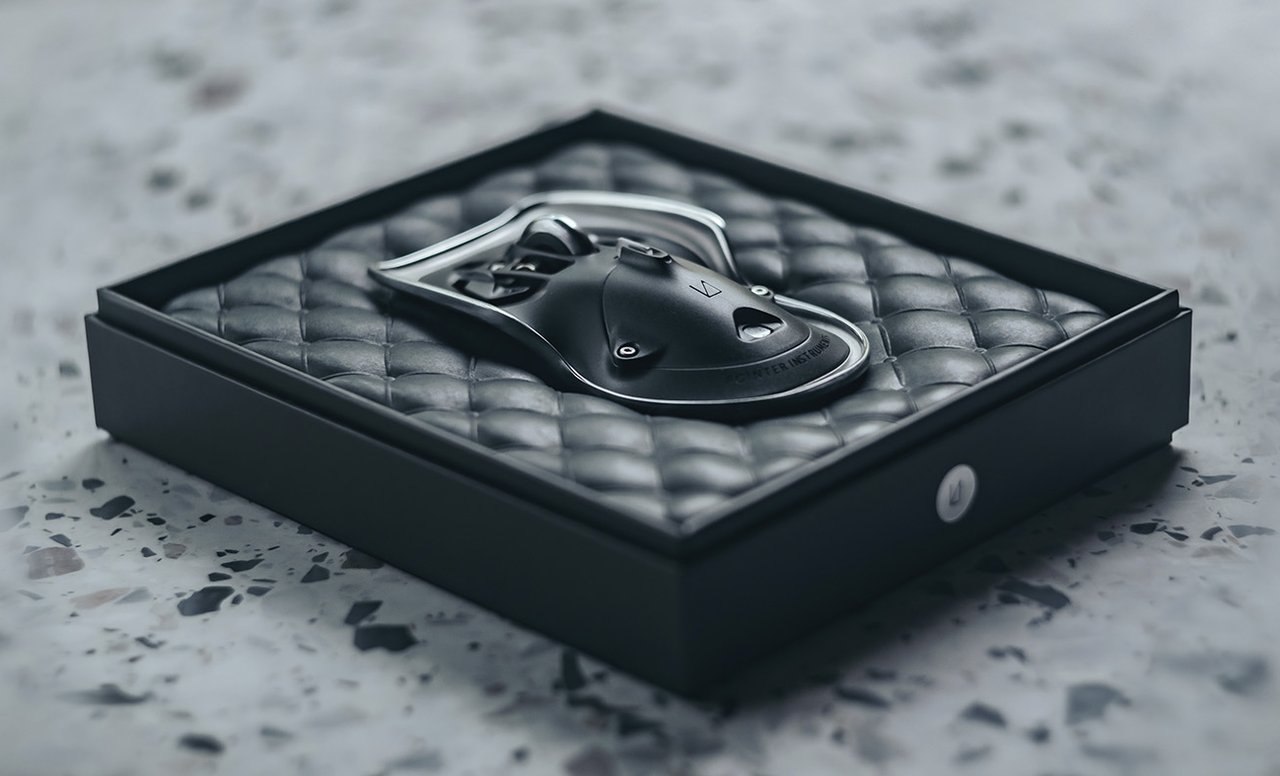 There isn’t real need to change the mechanics of a circular analog clock. It’s efficient, compact and can scale to any size from a wrist…

When I say the word ‘barbecue’ you think of your backyard, or your friend’s backyard, right? Barbecue never left the backyard, honestly. It was always…

This futuristic metal buckle tightens your pants… without a belt!

https://www.kickstarter.com/projects/bye-belt-hi-bucqle/worlds-most-innovative-replacement-of-the-belt First came suspenders, then the belt, then elastic, now we enter the age of the Bucqle. The Bucqle is a product from an alternate…