Hiding a safe behind a picture frame is too 1980s… this picture frame hides a secret whiteboard behind it, for you to jot down your clever ideas without needing to invest in an entire whiteboard.

Let’s face it, WFH isn’t going anywhere. No, I don’t mean that the pandemic is going to last forever (I honestly hope it doesn’t), but its effects are. Working from home, contrary to everyone’s beliefs back before 2020, actually BOOSTS productivity instead of affecting it. People work longer hours because they’re at home and not inside an office that they need to leave as soon as the clock hits 5 PM… or beyond 5 PM if you have a hellish supervisor. WFH is perfect for bosses who are seeing productivity soar without having to worry about office spaces, extra staff, and holidays, and honestly, the inverse is true too, because a lot of people find working from their own home comforting, since they can live far away from their office, or even in another city, and simply show up by opening a laptop. Perhaps the only thing lacking in this equation (apart from pants, which nobody seems to ever wear on video calls) is the ubiquitous whiteboard, on which people jot down ideas, note schedules, leave post-it notes, and have intense brainstorming sessions… although the folks at Sable Flow are changing that. 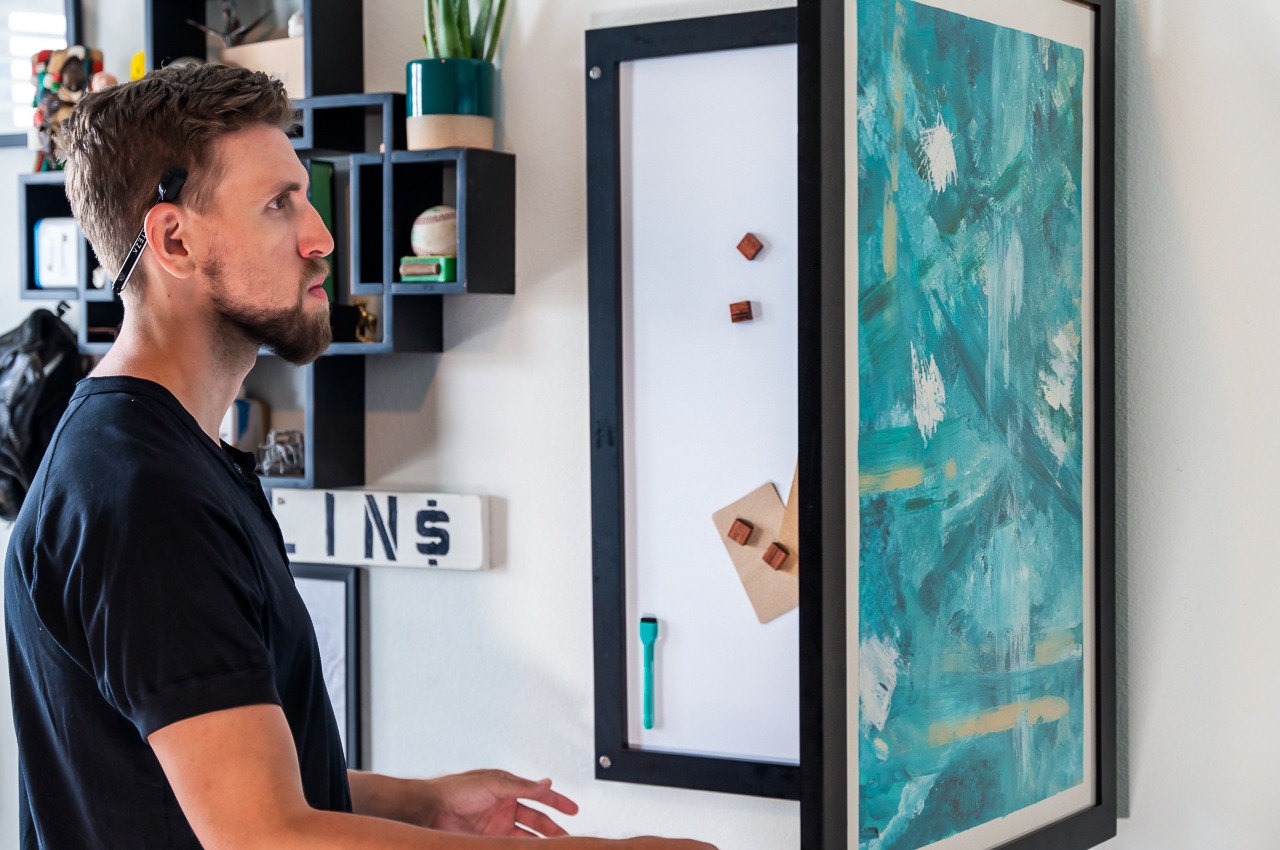 Realizing that it would be ridiculous to actually own and display a large whiteboard at home, the folks at Sable Flow came up with a clever compromise instead… a secret whiteboard hidden behind a poster frame. Titled quite literally the Secret Whiteboard, this number features a nifty wall-hung poster frame that opens up like a book to reveal a double-spread whiteboard that you can jot on with a marker, stick post-its on, or even fix scraps of paper and printouts using magnets.

A hanging print frame that opens like a book to reveal a double-sided, magnetic whiteboard inside.

Every board comes with an art print included, or switch out the art to your favorite poster.

The recessed frame and the magnetic whiteboard allows you to keep your markers, erasers, and papers stored inside.

Easily adjustable to hang either way. 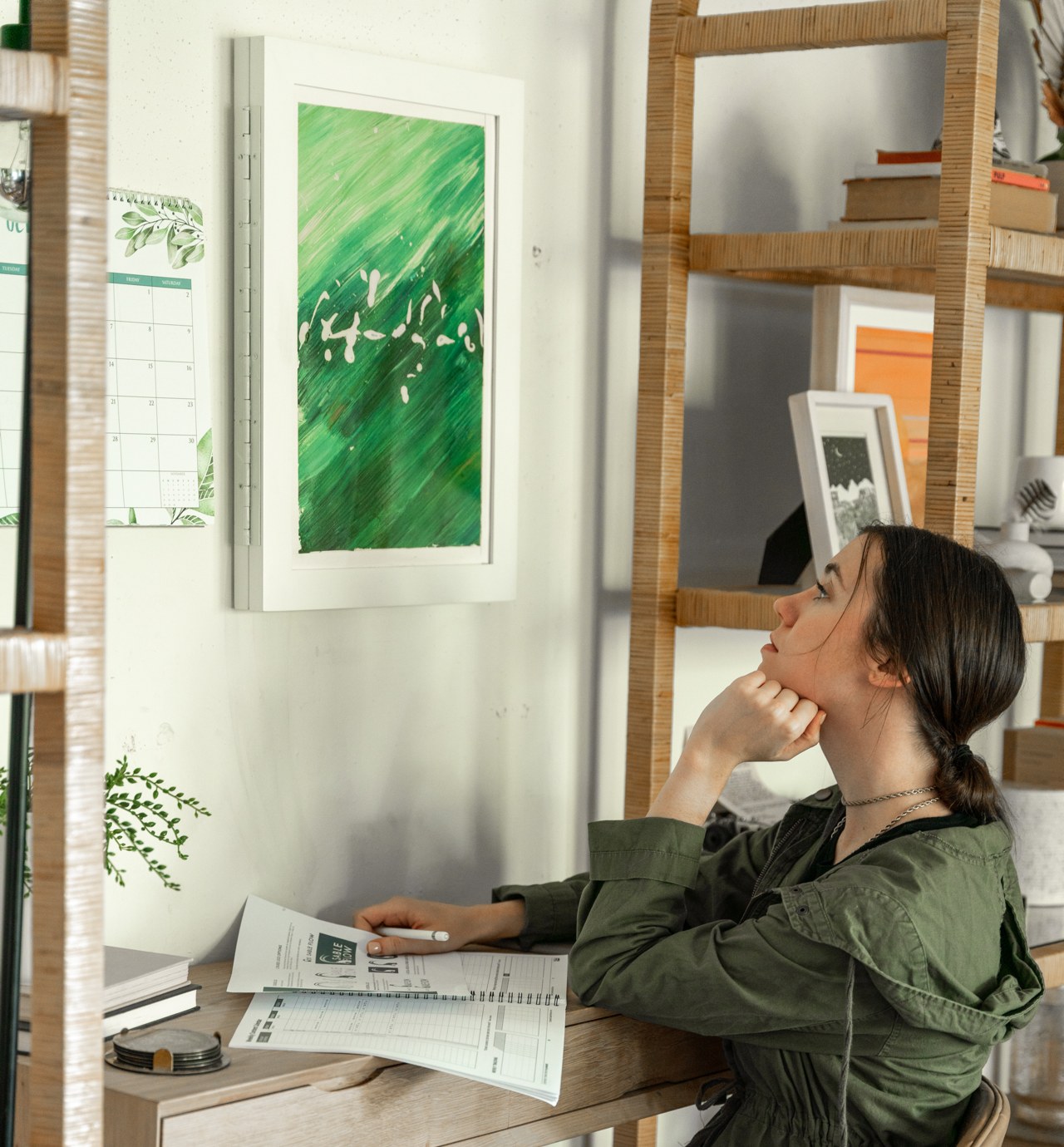 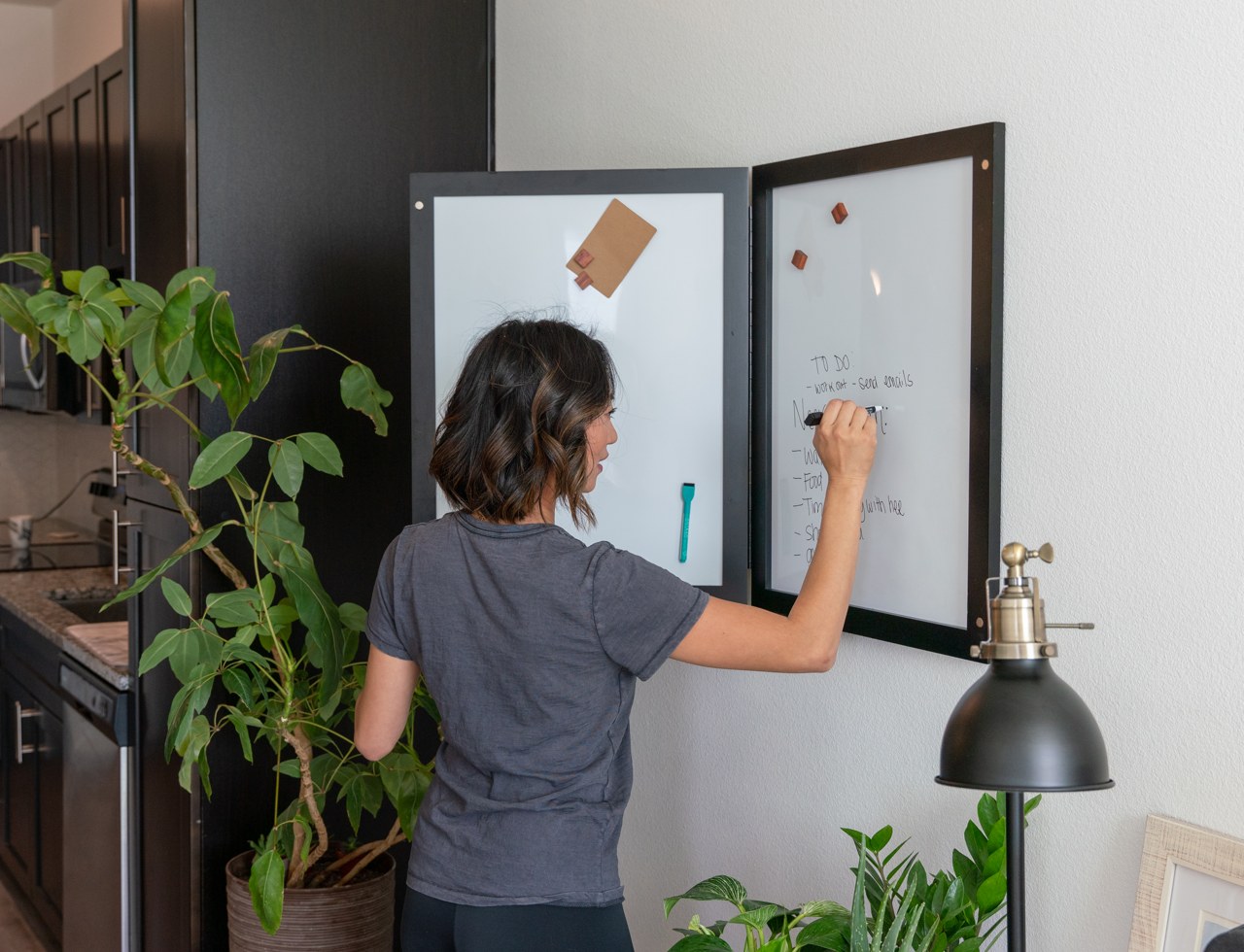 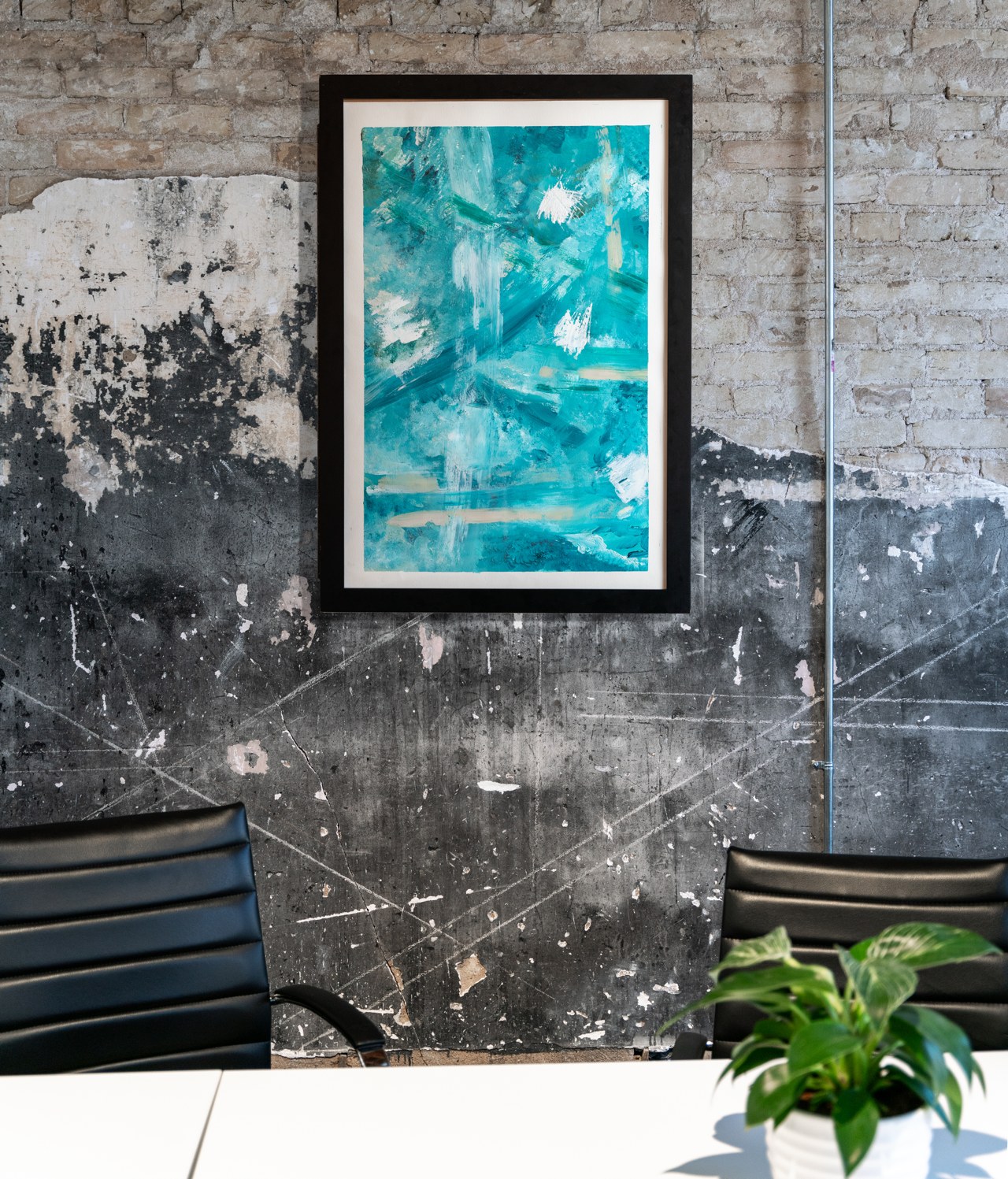 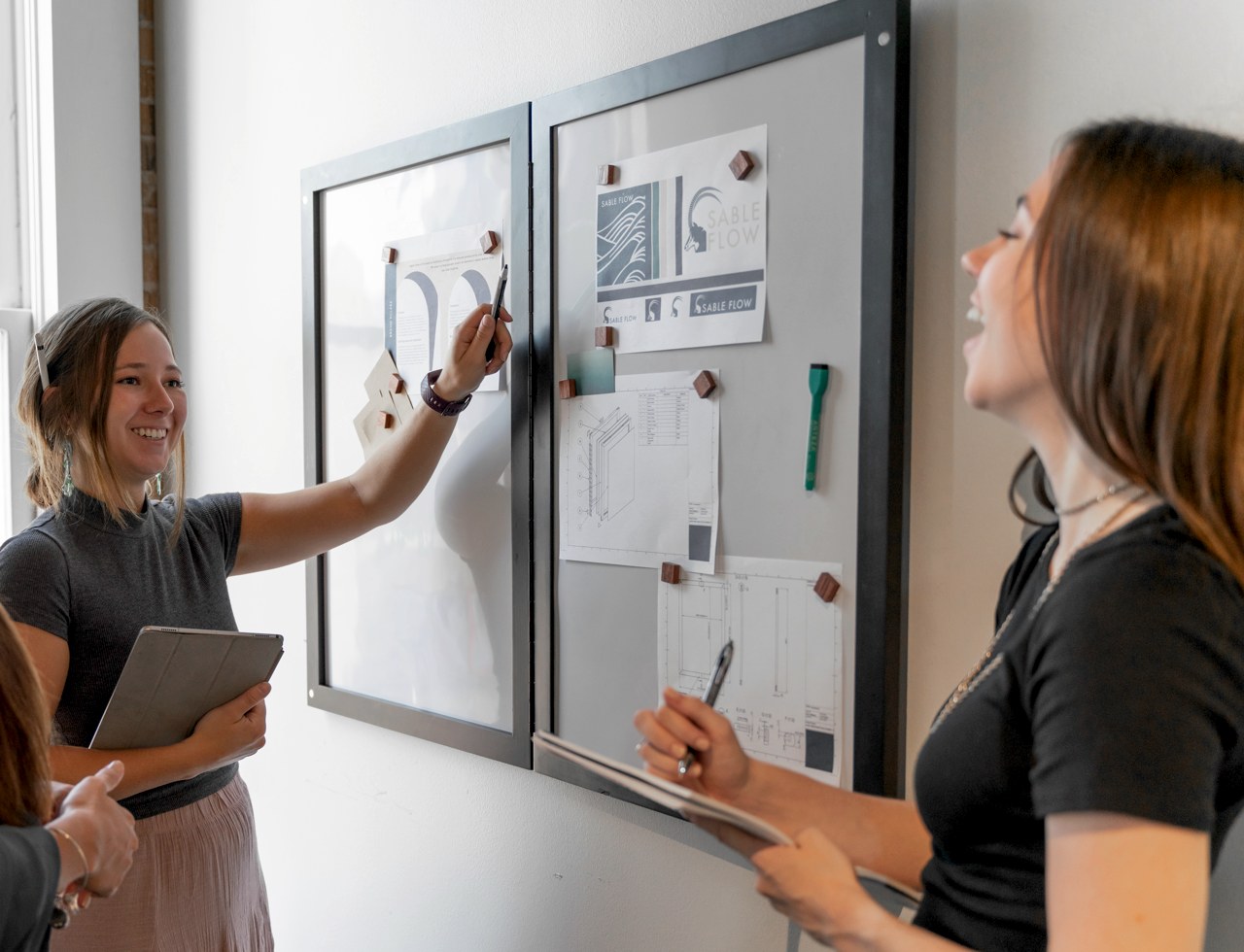 The Secret Whiteboard comes in 3 sizes – Small, Medium, and Large, and in a choice between a black or white frame, covering most decor and space requirements. It even ships along with a magnetic marker and eraser, as well as 6 wooden magnets to stick those paper notes. A hinge on the side of the frame allows it to pivot open, and the frame can be hung on a wall in either orientation, allowing the hinge to open either to the left or the right. When closed, the frame reveals the artwork of your choice (which you can simply slide in from the side), and when opened, transforms immediately into two whiteboards that bring a level of efficiency to your workspace that your WFH setup hitherto lacked… and the second you’re done for the day, the frame closes shut rather satisfyingly, thanks to magnets built right into the sides!

With martian movies smashing the box office and NASA’s recent announcement to put permanent residents on Mars the big news, space colonization seems like all…

CollapseMini is a totally-wireless, all-in-1 docking station/speaker/table for all Android phones. No controls, connector, or power button…. and more importantly no annoying configurations! Simply place…