The Brook is a tiny home in Rosebrook, Australia designed to be a passive house equipped with a fully off-grid solar panel system and expandable roof for lofty ceilings à la New York-style apartments.

We’ve seen countless tiny home designs throughout the years. Some might even think if you’ve seen one, then you’ve seen them all. How innovative can you get when you’re working with such a tiny space? If they really get creative, then architects often incorporate elements like hidden storage compartments, multifunctional furniture, and even expanding structural frames all to augment the home’s available living space. One small, 27sqm home in Rosebrook Australia called The Brook, designed by Small Not Tiny, incorporates each one of these elements and so much more to make the most of the home’s small build. 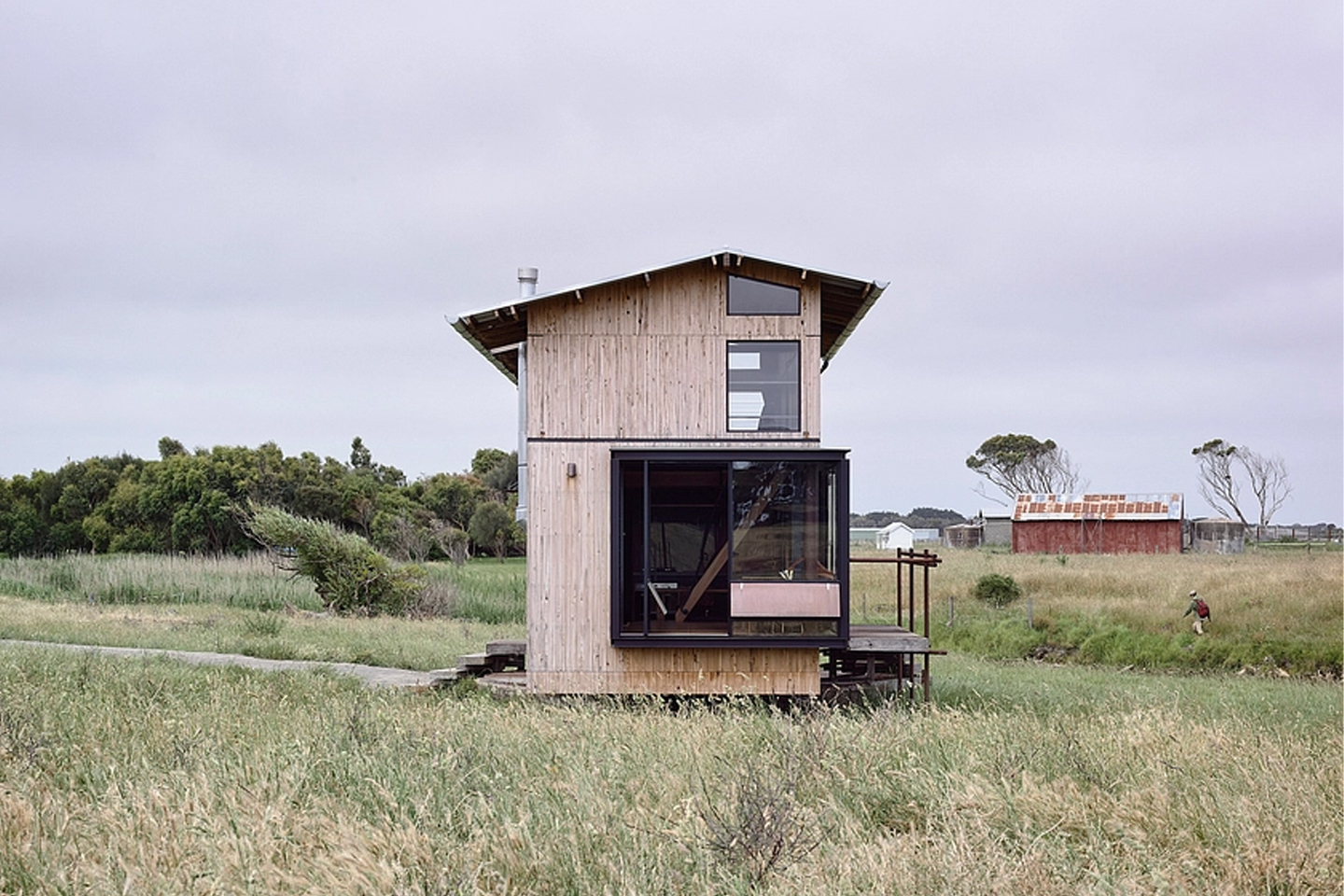 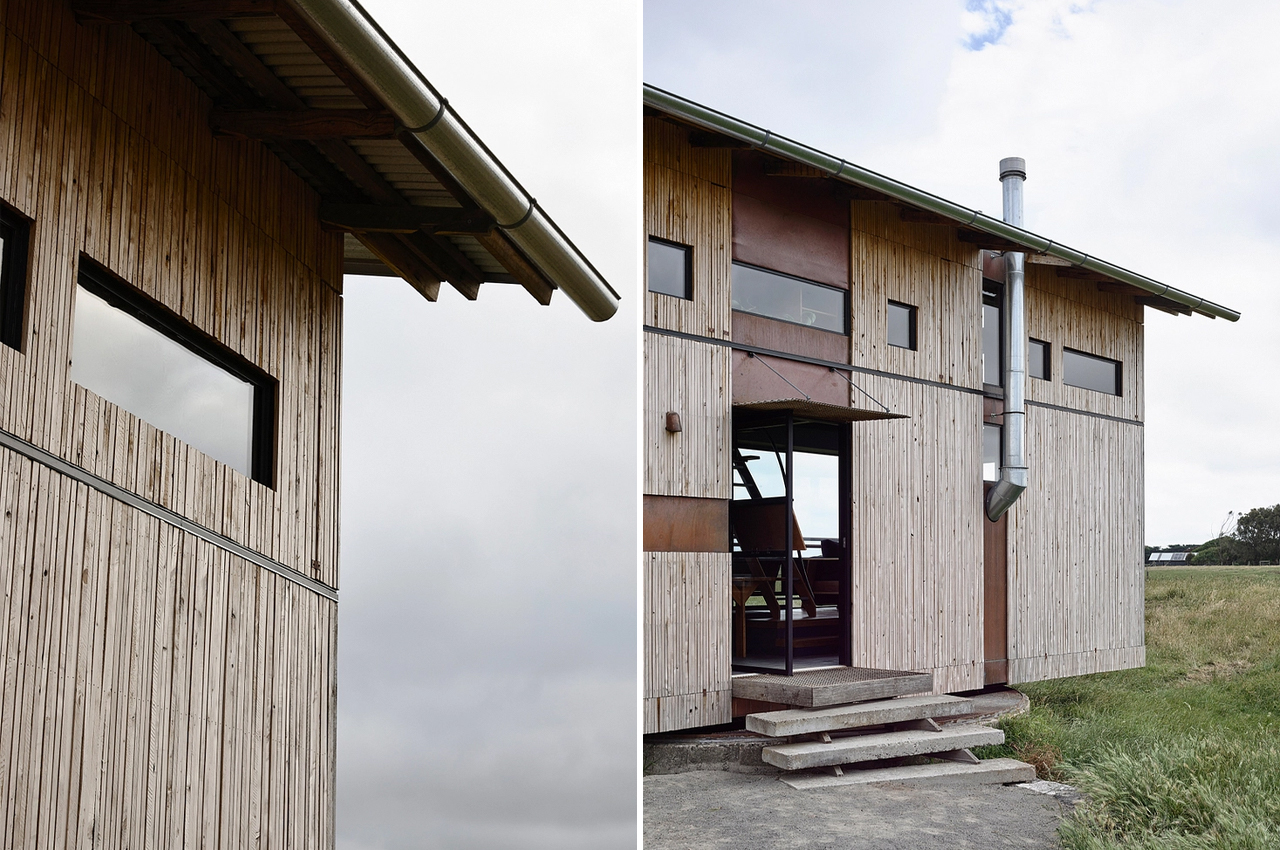 Clad in cypress, the timber used to construct The Brook was sourced from felled, old cypress windbreaks that otherwise would be disposed of or burned by farmers who had no use for them. Repurposing and milling this timber to build The Brook captured carbon and presented a theme that would follow throughout the construction process. Placed atop a recycled concrete slab that was found in an old paddock, The Brook is slightly raised from the ground to brace the home for potential flooding from the nearby Moyne River. 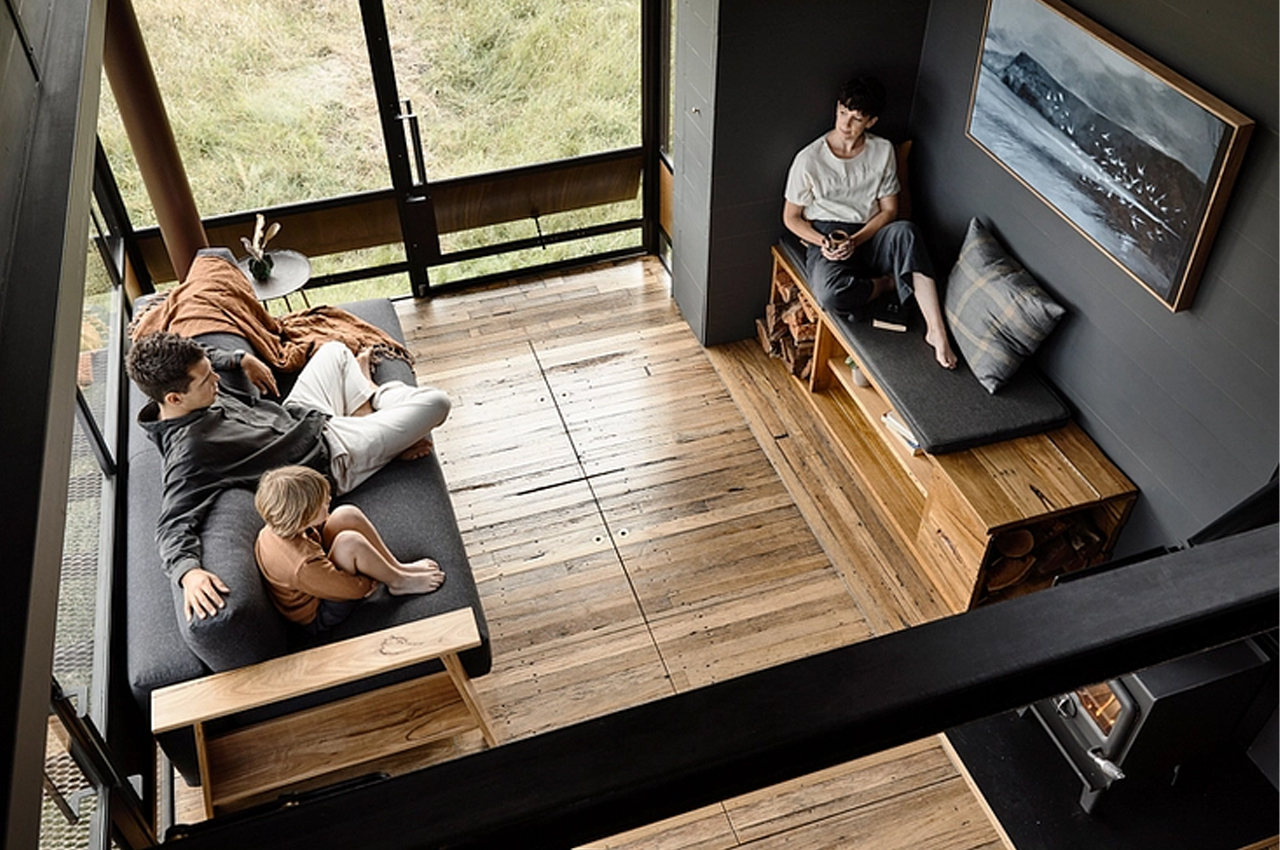 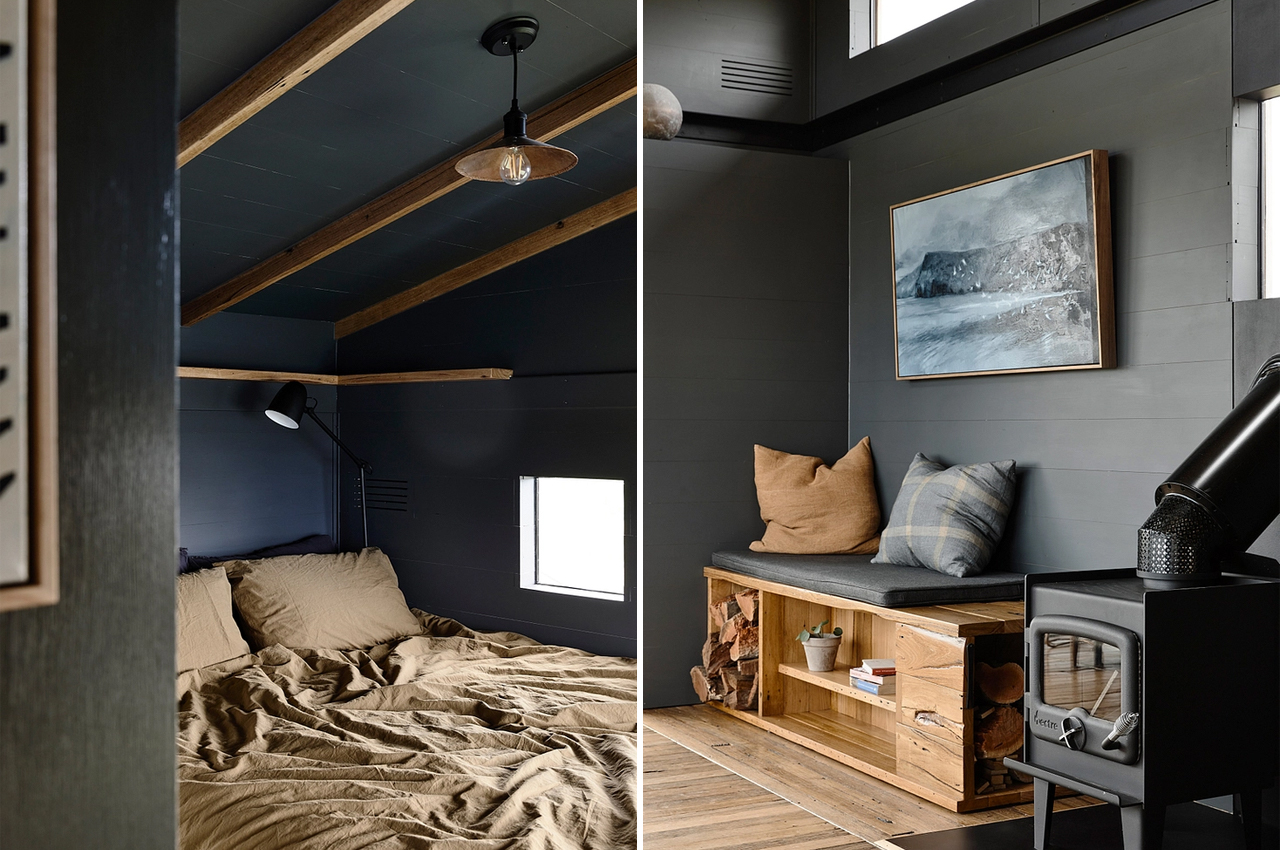 Designed to be a passive home, The Brook hosts a fully off-grid solar panel system on its roof stocked with batteries and a backup generator to ensure a constant flow of power when needed. The roof itself also expands in height on a telescopic frame. During the transportation of The Brook, height parameters margined the home to a height of five meters. Once transported and situated into place, telescopic framing had the uppermost walls fold in so the roof could expand before locking the walls back into place, creating a lofty sleeping area and high ceilings. 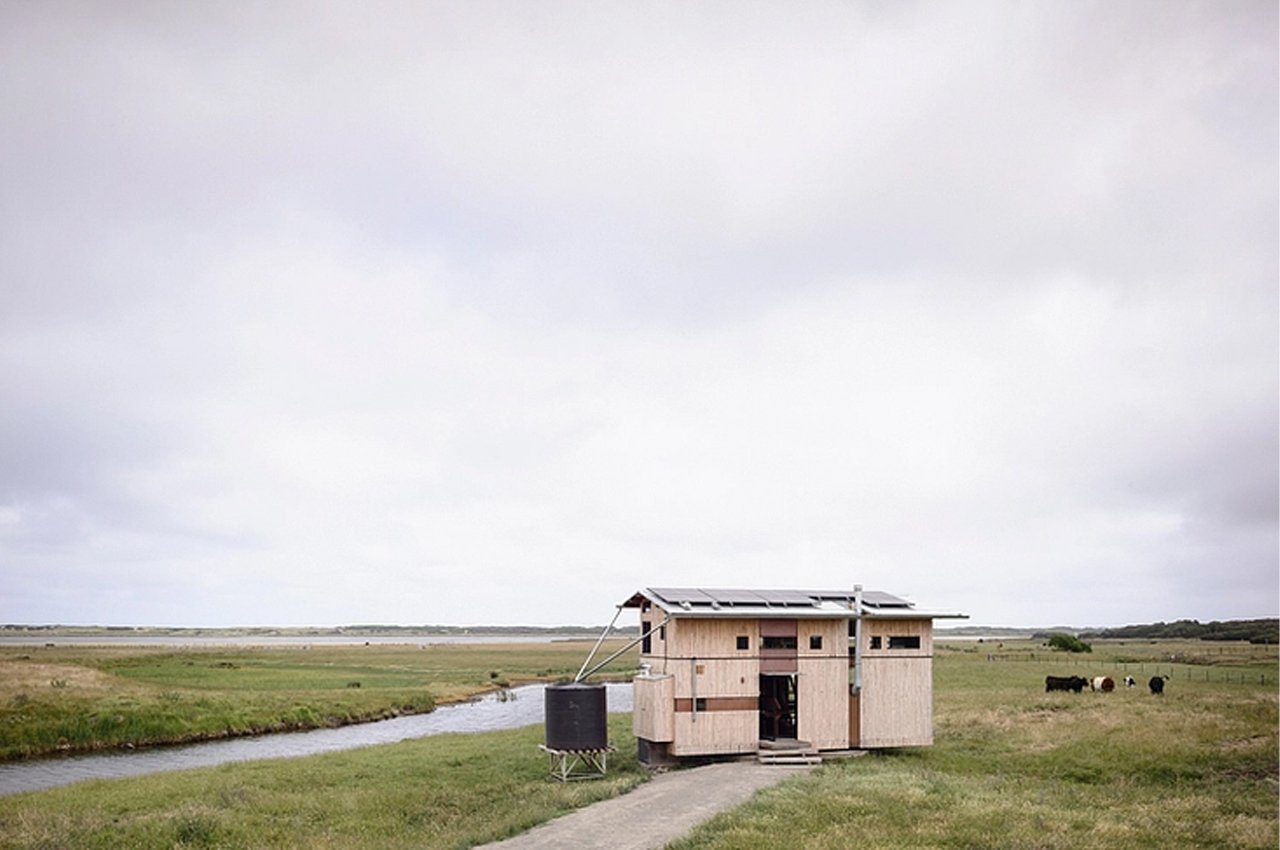 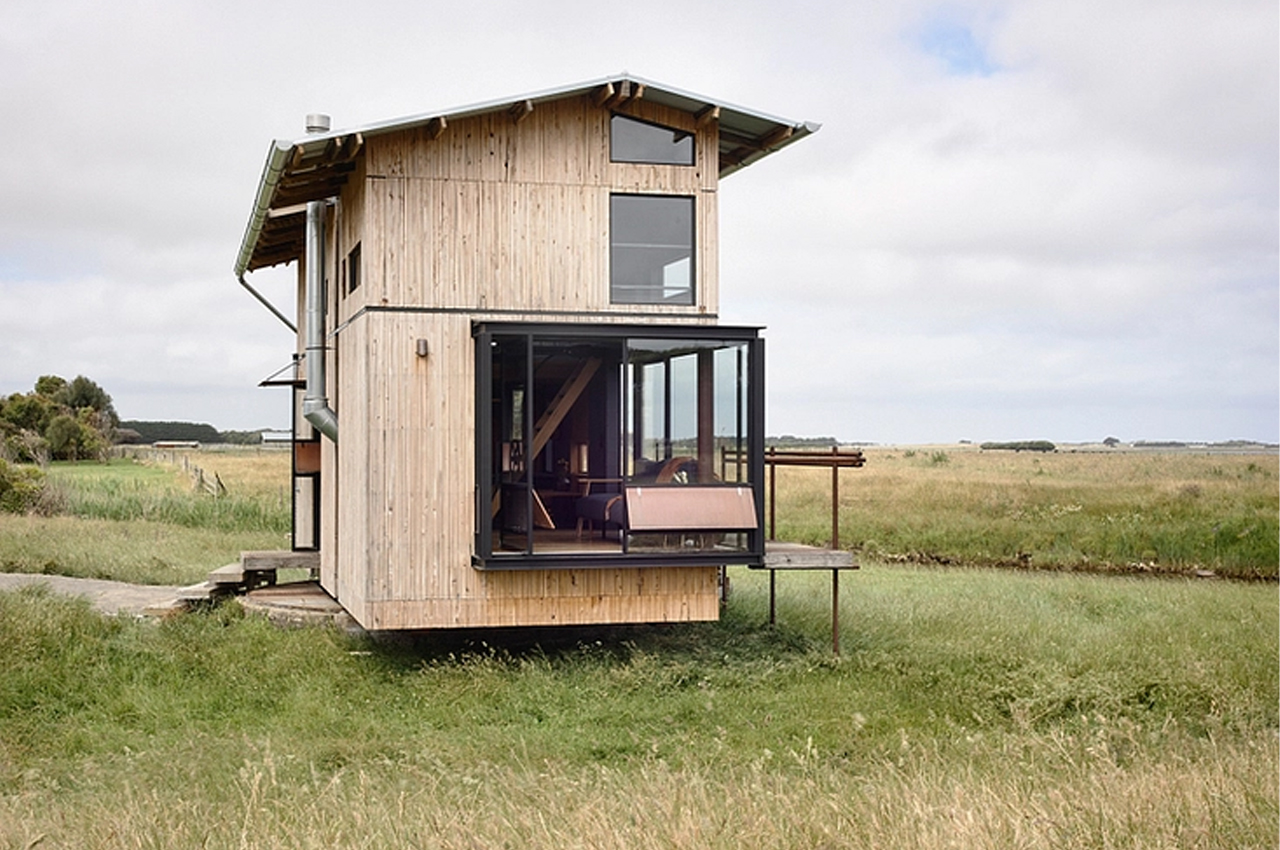 Once the roof is raised, the home comes into its final form and expands the home’s floor plan to 40sqm. The raised roof generates an upper mezzanine that stores the bedroom and working space, which is assembled with a deskspace that folds out on piano hinges, where you can work as your feet dangle above the downstairs living area on a wooden plinth. A bookcase also separates the sleeping area from the bedroom to ensure enough privacy. 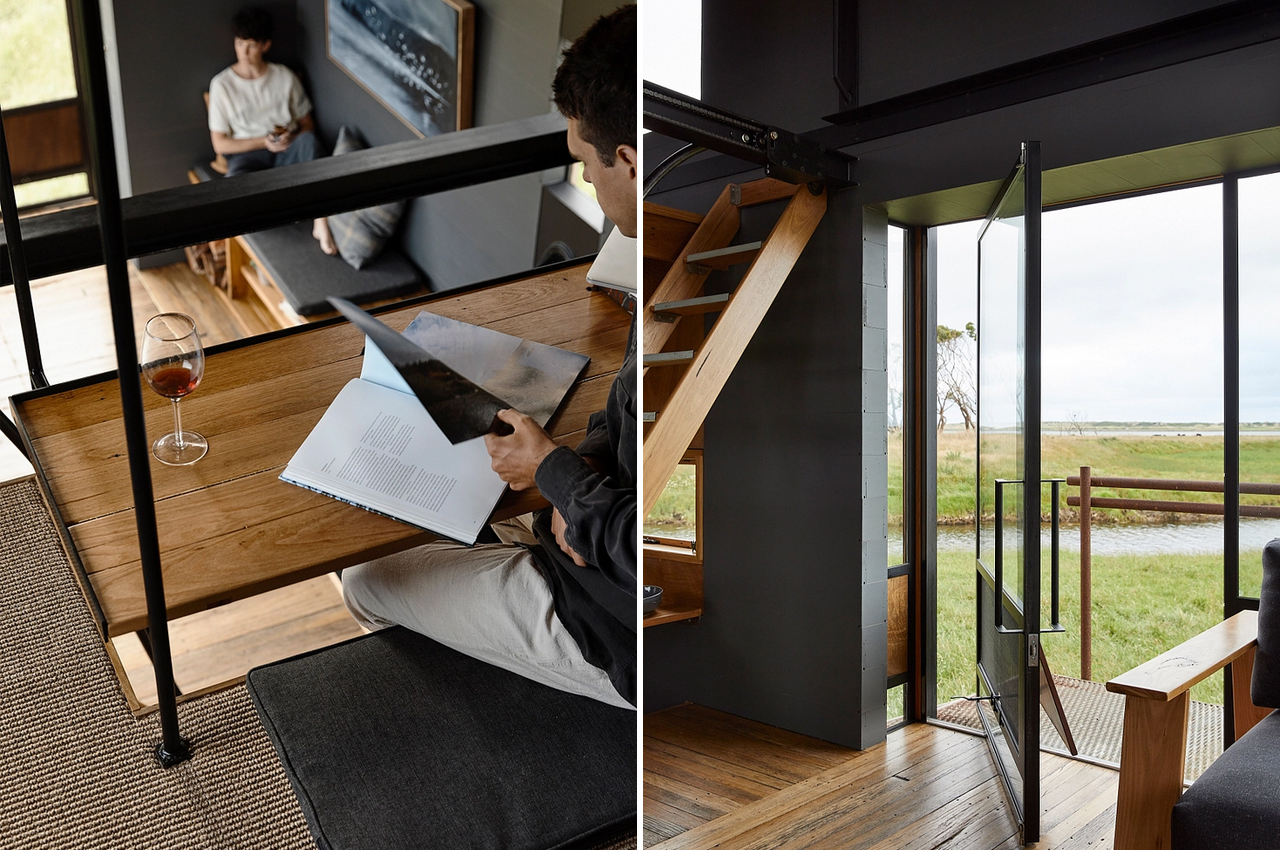 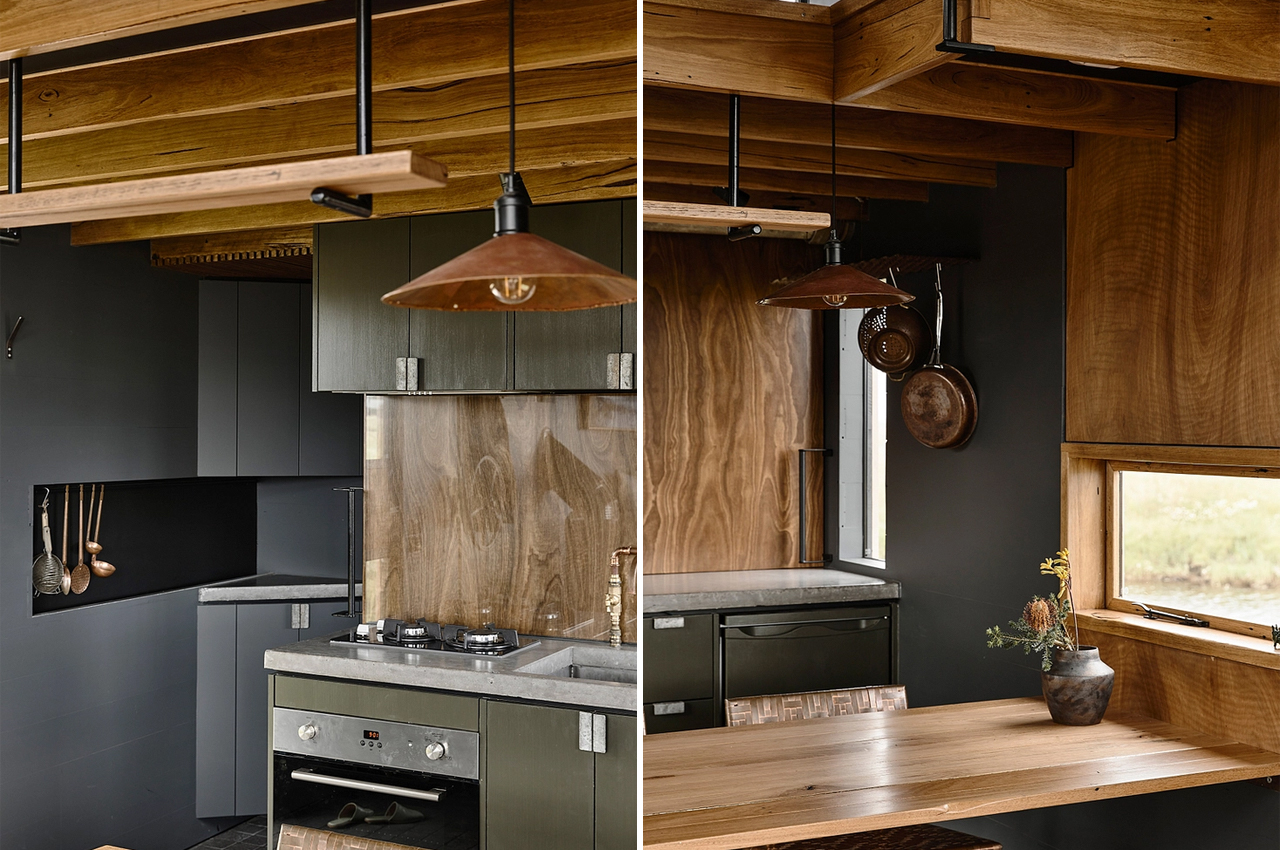 Guests can reach the ground level via a wooden staircase that retracts from the mezzanine with the turning of a wheel. Downstairs, the living room juts out from the rest of the house in the style of a sunroom and is enclosed by floor-to-ceiling glass windows reinforced with steel beams. There, you can sit in the living room and still feel the openness of being outdoors. The kitchen is outfitted with a two-burner gas cooktop, extra-sized sink, small refrigerator, and plenty of hidden storage compartments. The cabinet’s sliding wooden door even doubles as the bathroom door. 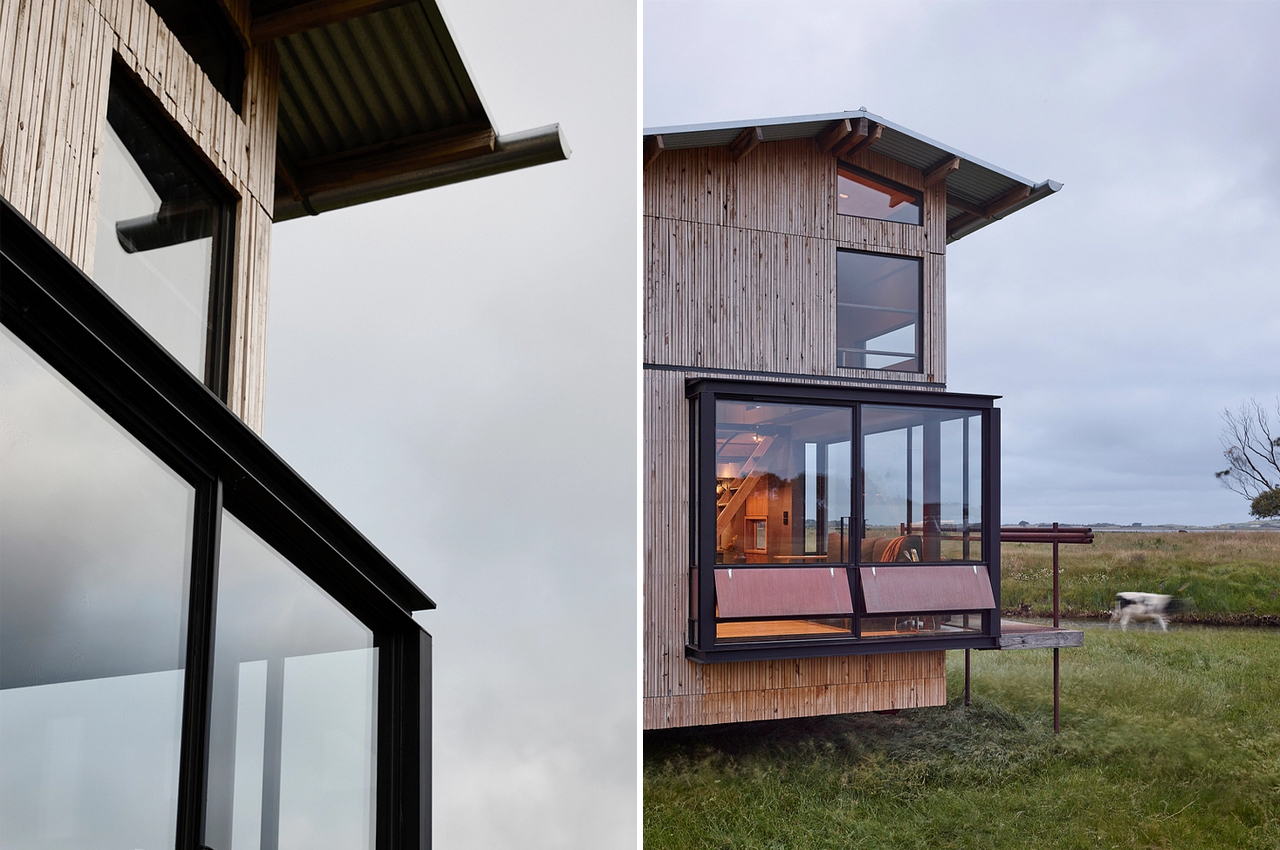 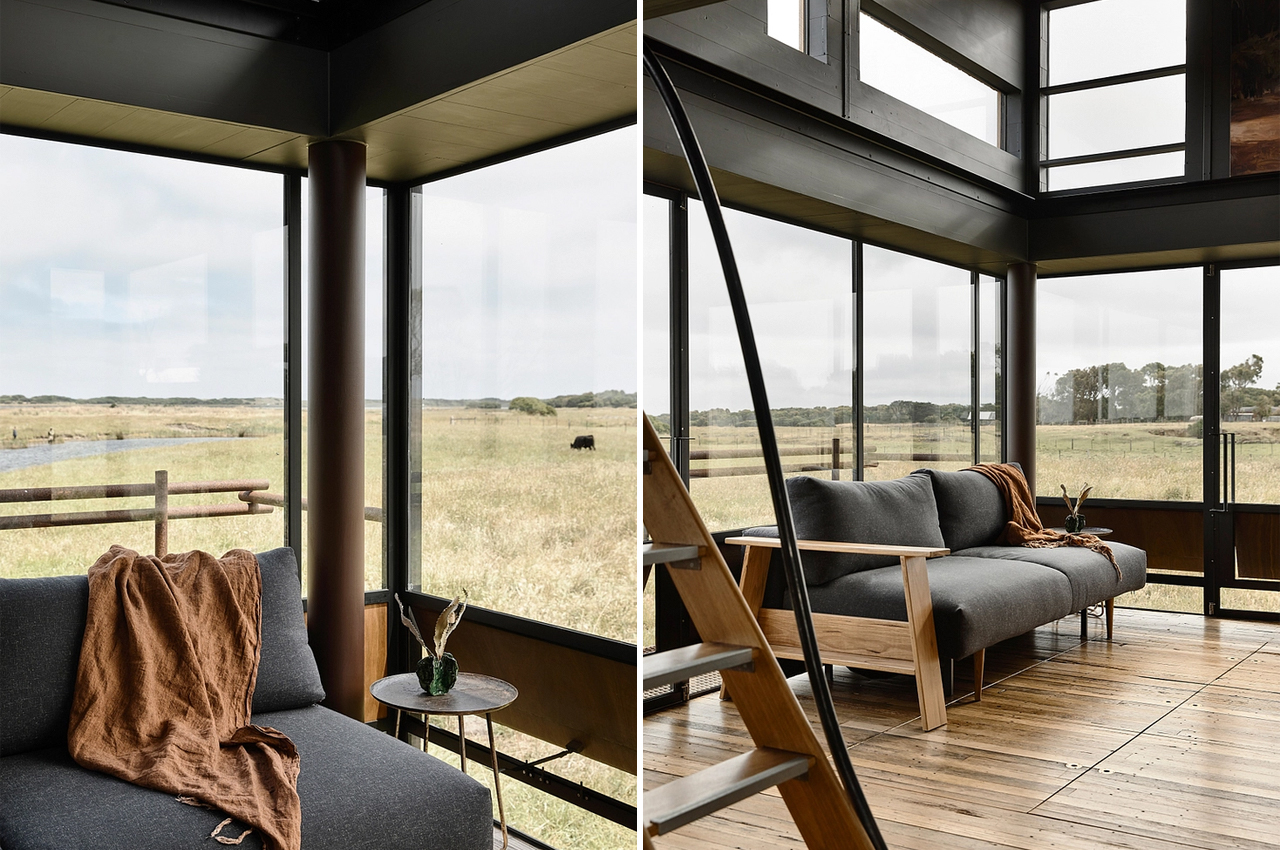 The loftiness inside The Brook was inspired by New York-style apartments, bringing expansive glazed glass windows and an industrial aesthetic with a mid-century modern flair to Australia’s regional setting. Throughout the home, recycled brass elements and metal mesh shelving add to the home’s rustic energy and multipurpose outfittings. Copper and ply louvers border the perimeter of the home on both floors and pivot doors provide access to the home’s south and west sides to offer plenty of fresh air and cross-ventilation. 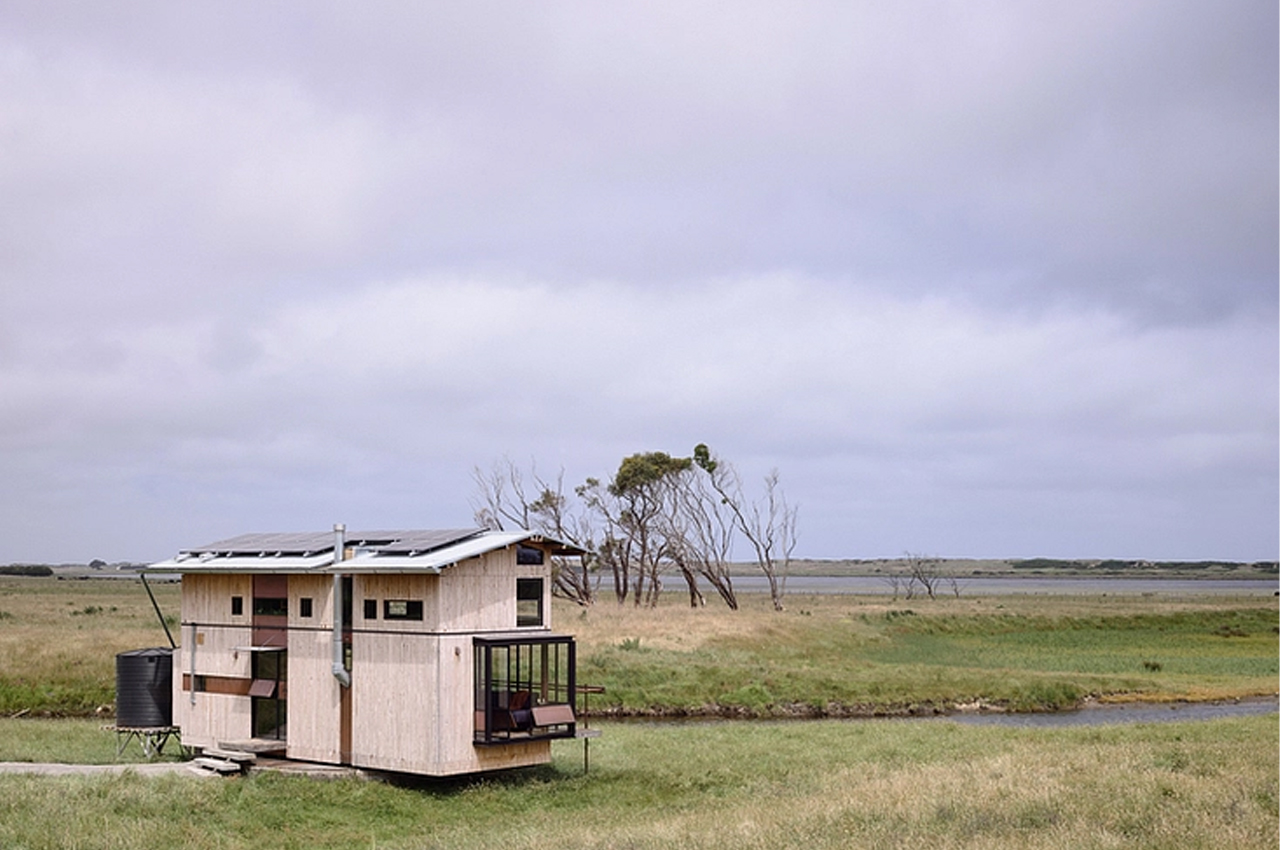 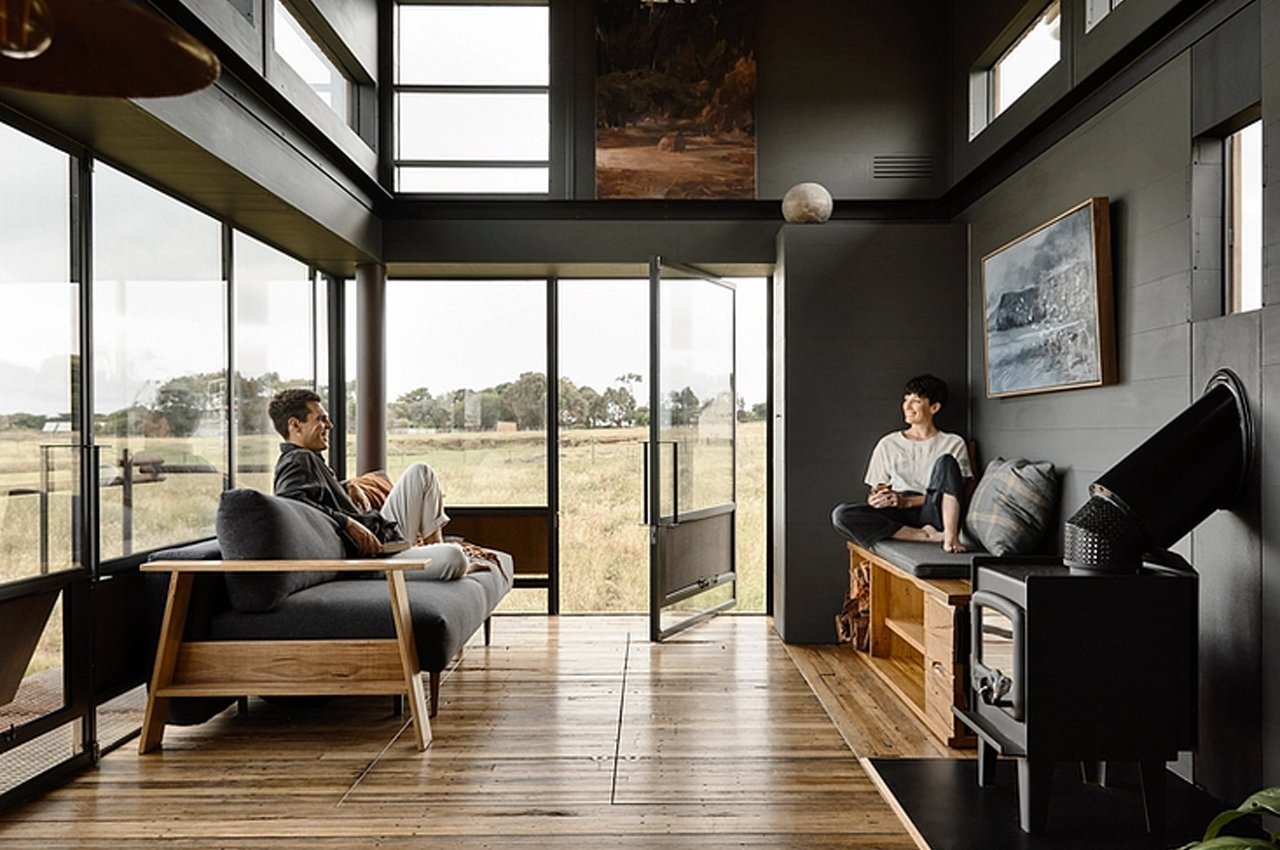 The living area juts out from the rest of the home to bring you closer to the outdoors. 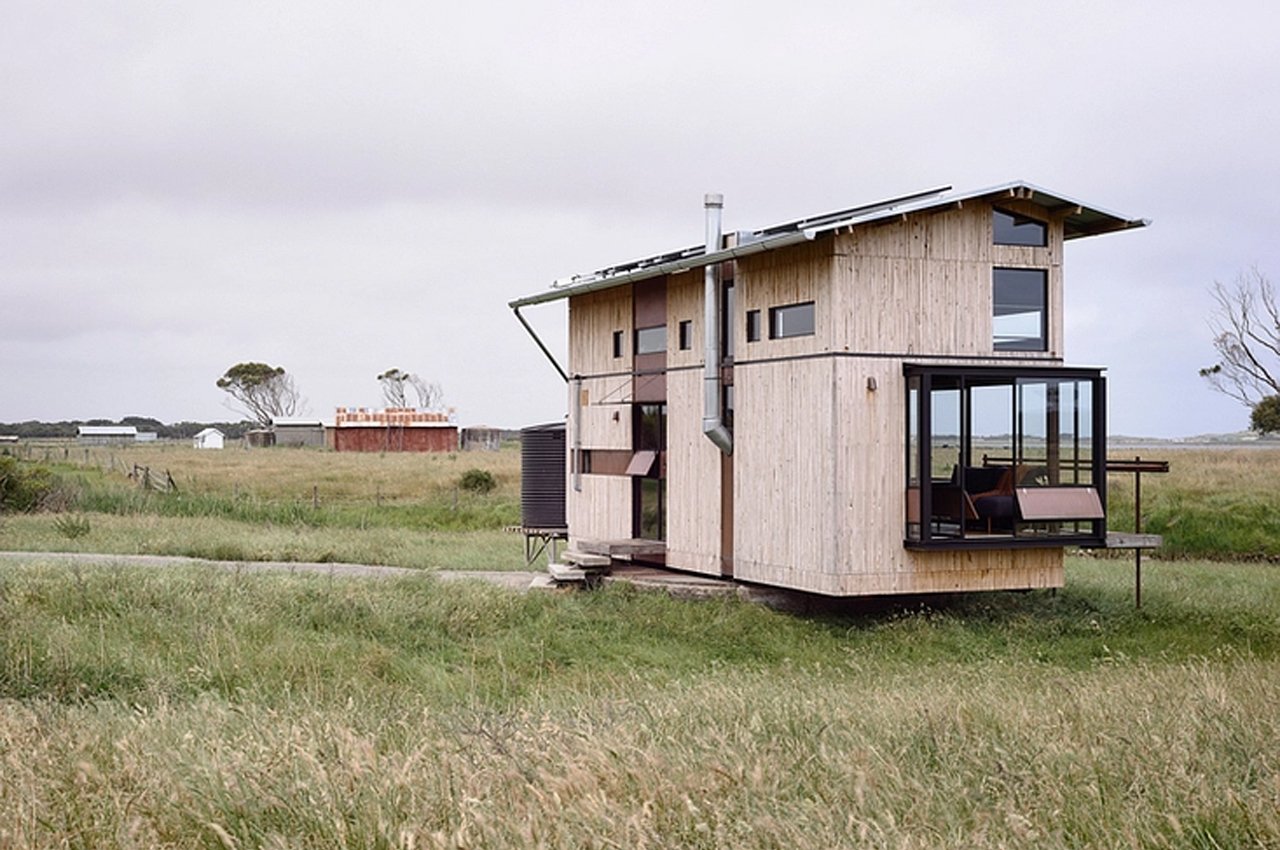 Positioned nearby the Moyne River, The Brook is situated atop a recycled concrete slab to brace the home against flooding. 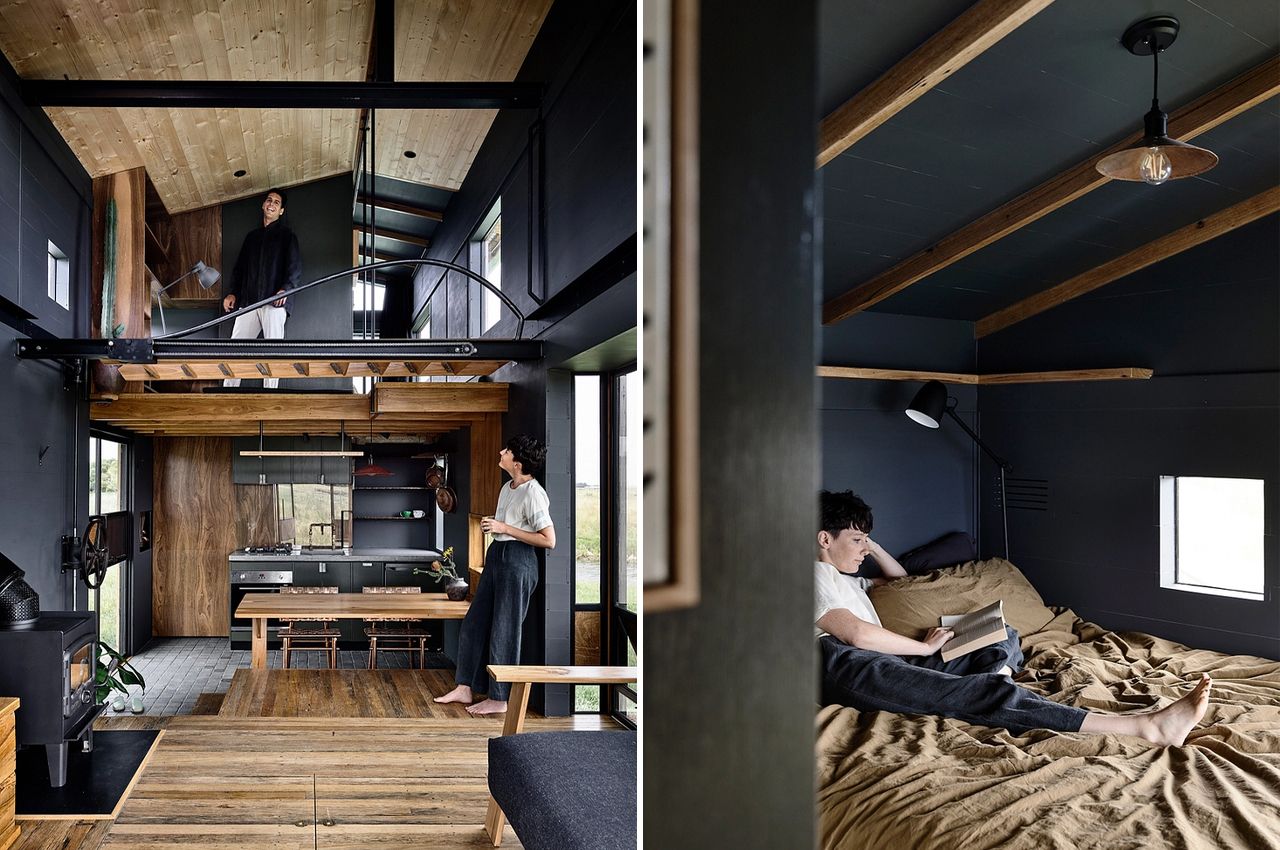 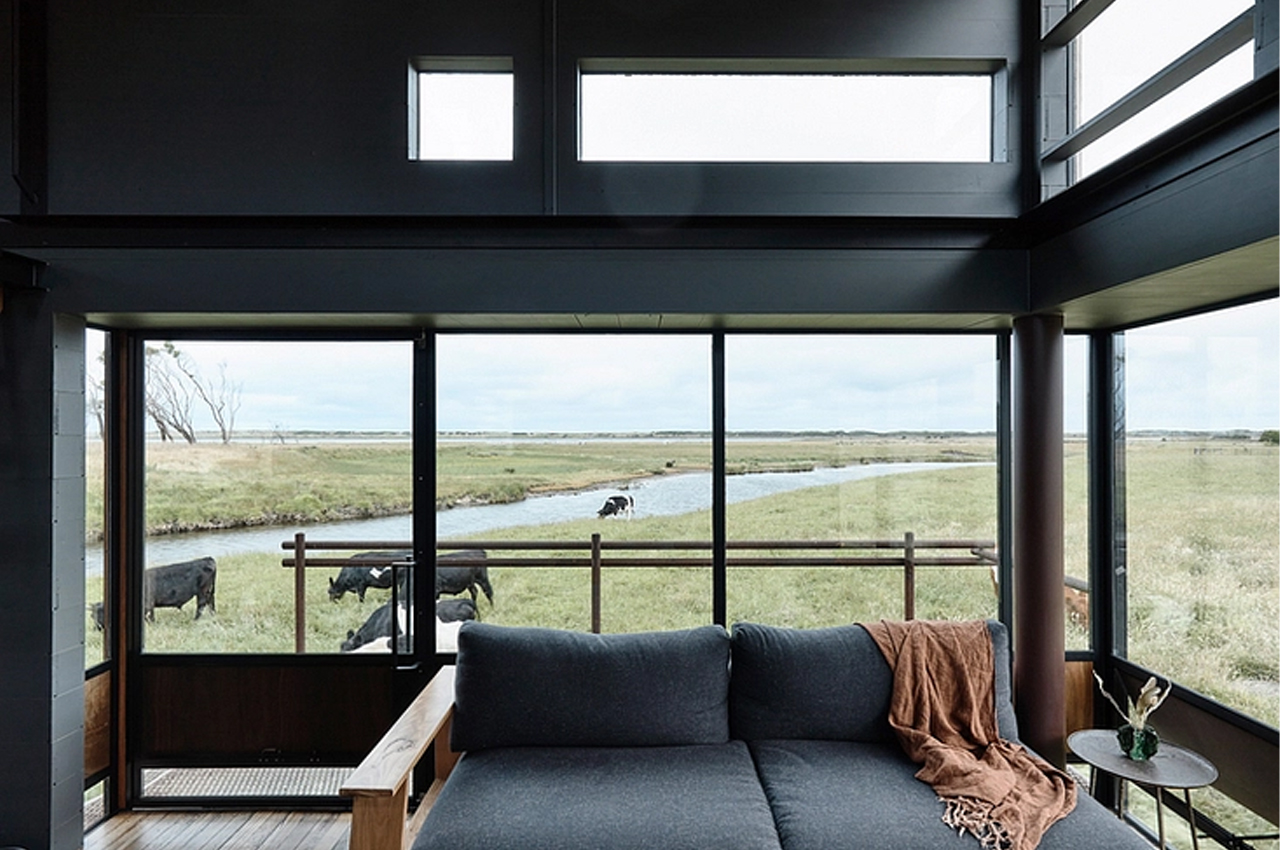 Dark, navy blue interiors focus the eye on the outdoors and warm up the home come dusk. 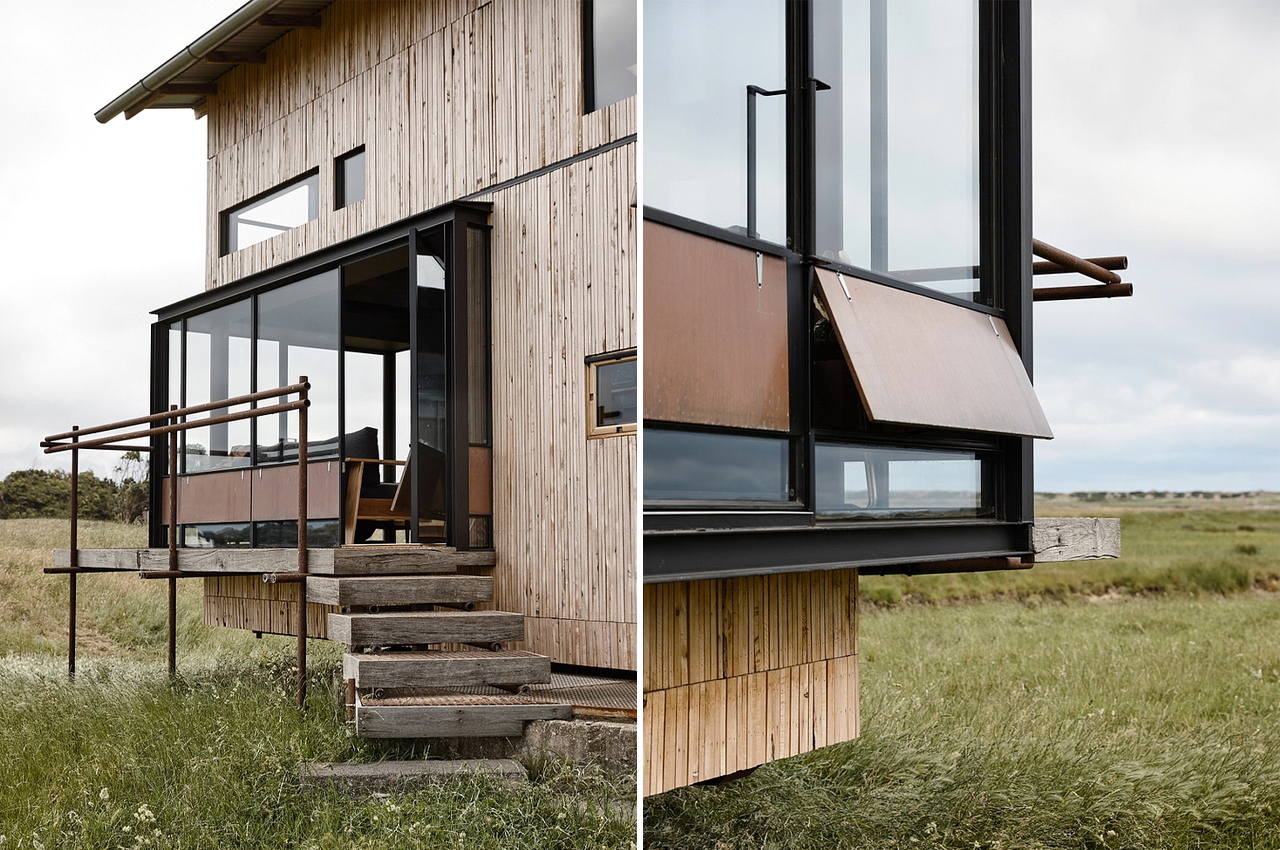 Copper and ply louvers border the perimeter of the home’s windows, providing the home with plenty of airflow and cross-ventilation. 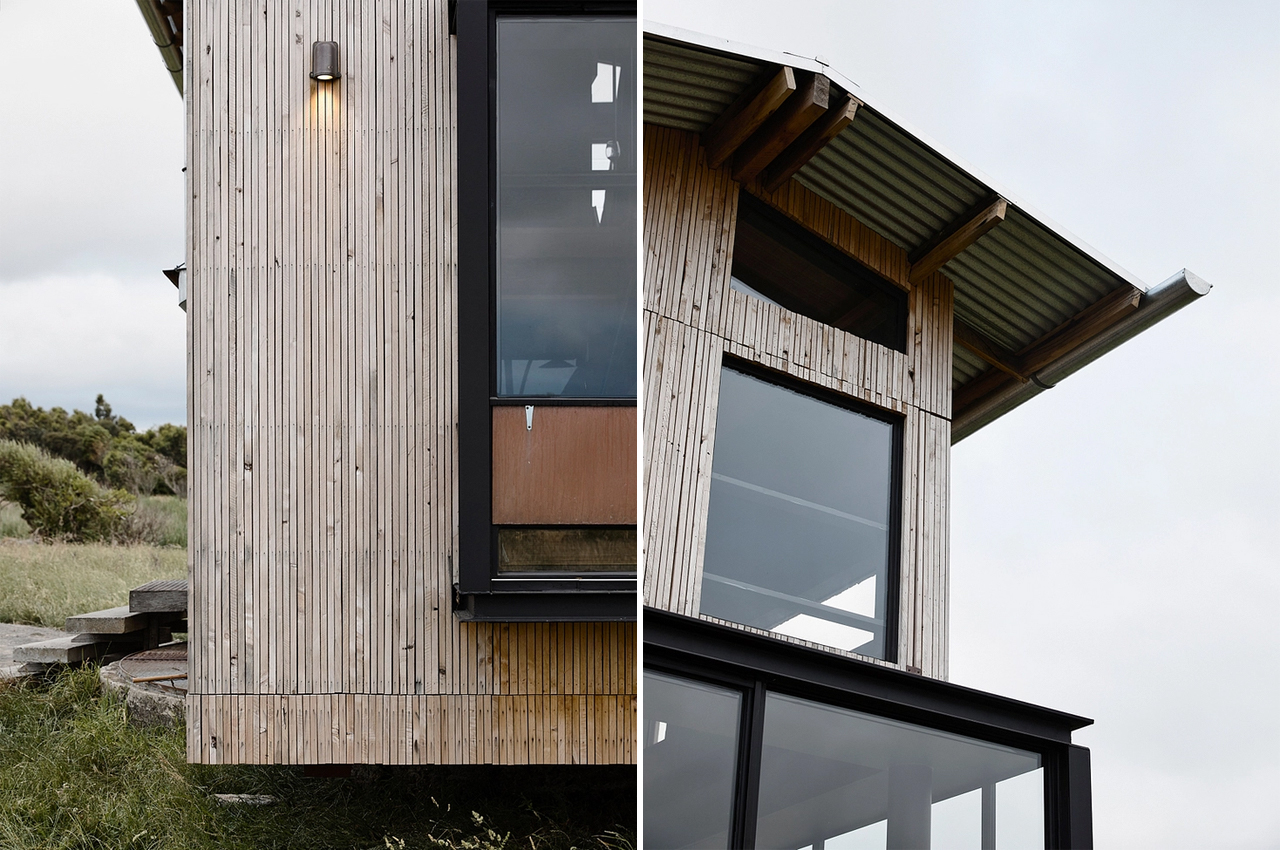 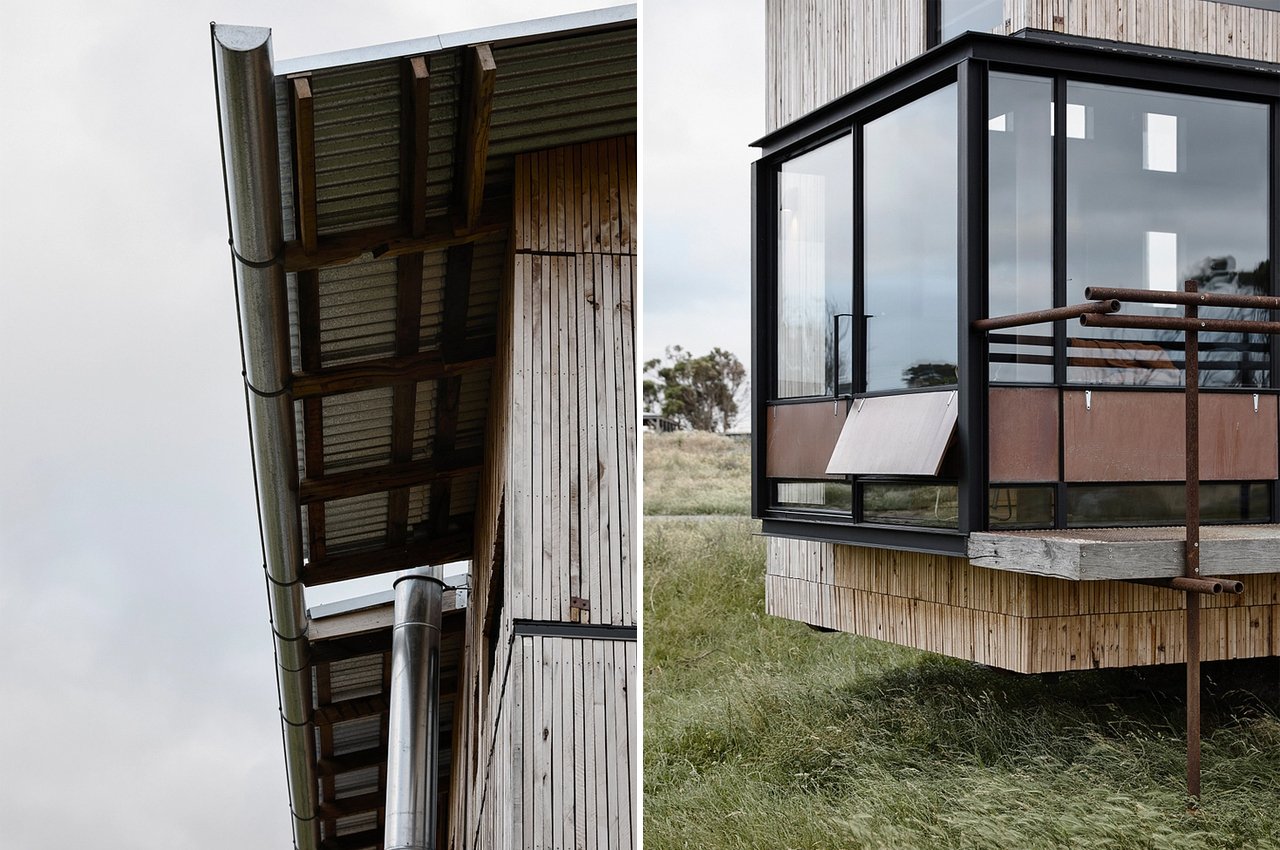 The home’s exterior is clad in cypress wood sourced from felled, old trees that would otherwise be discarded or burned. 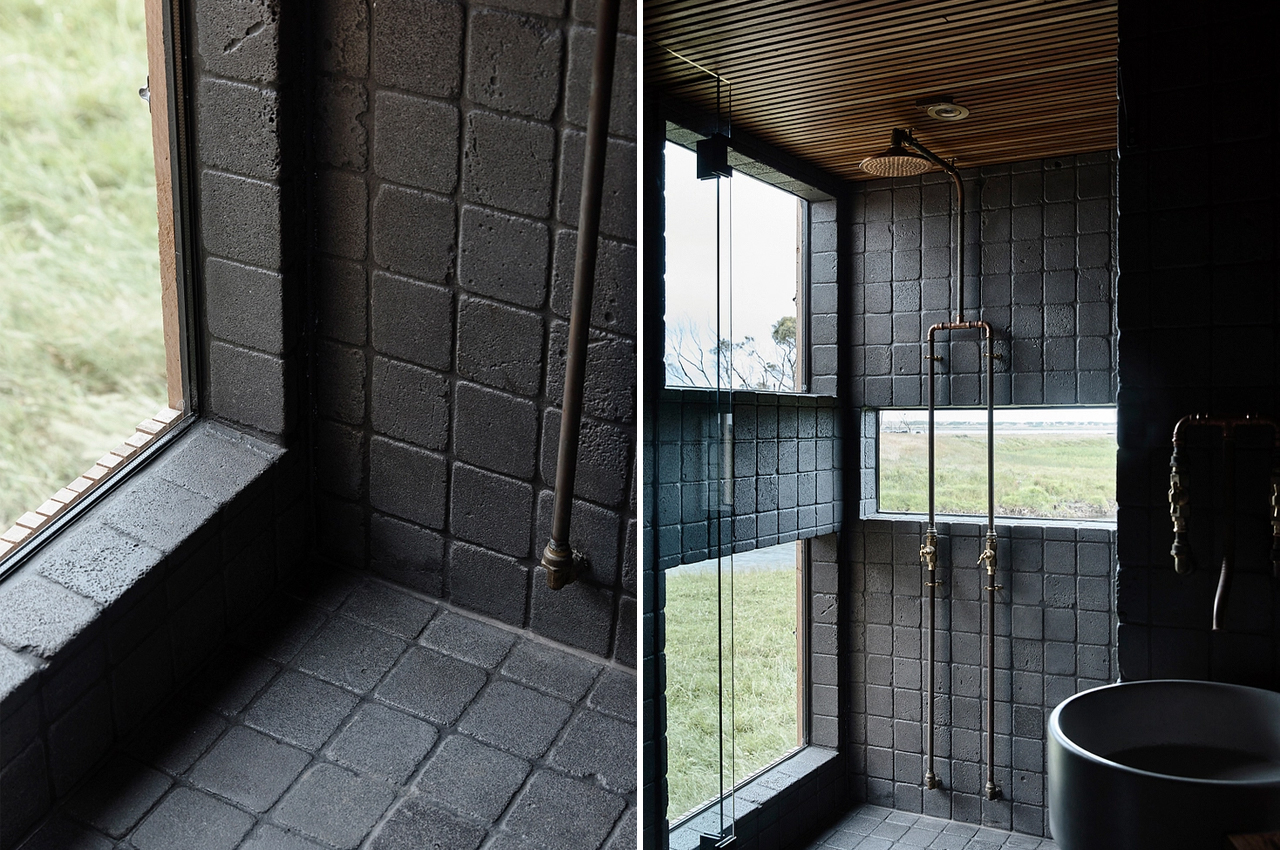 The bathroom is lined with bluestone cobbles that give the washroom an elegant flair while directing attention to the windows. 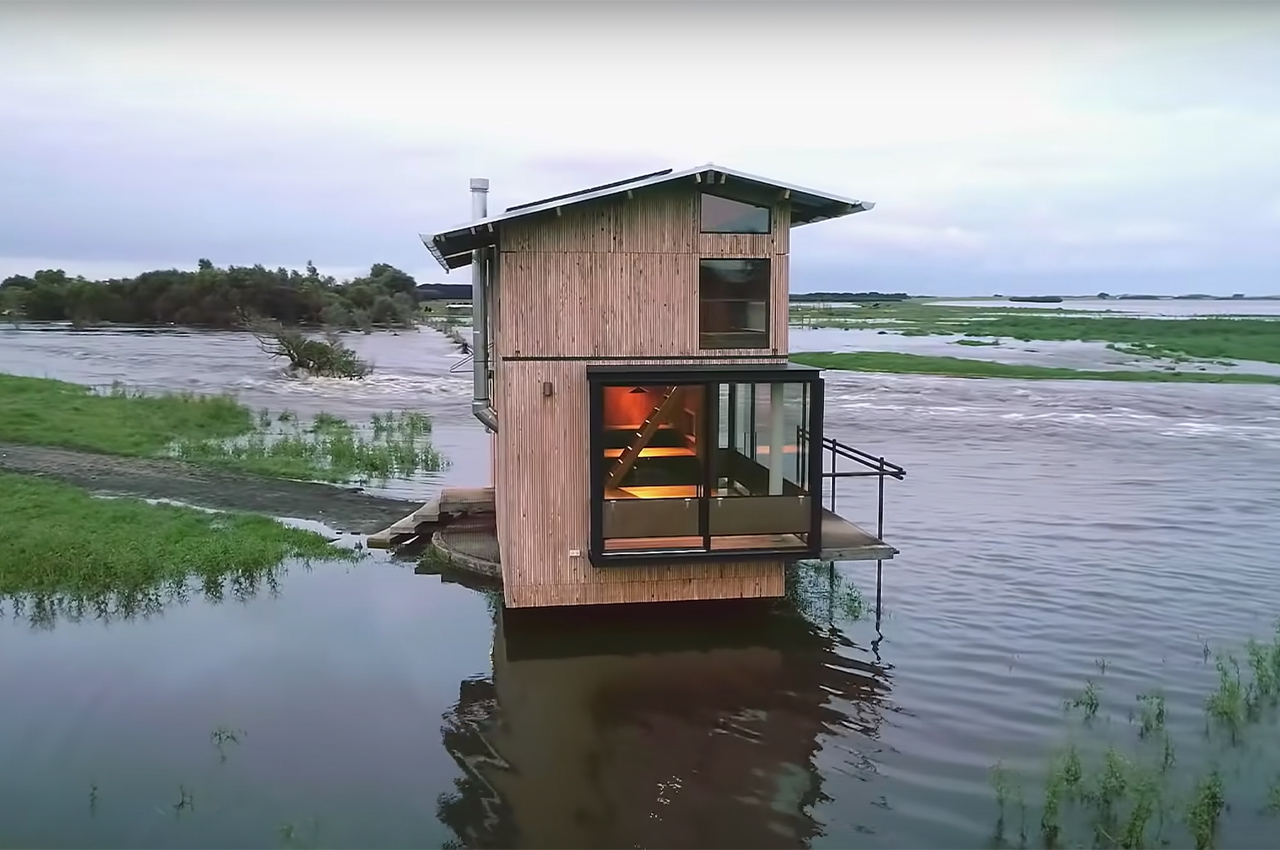 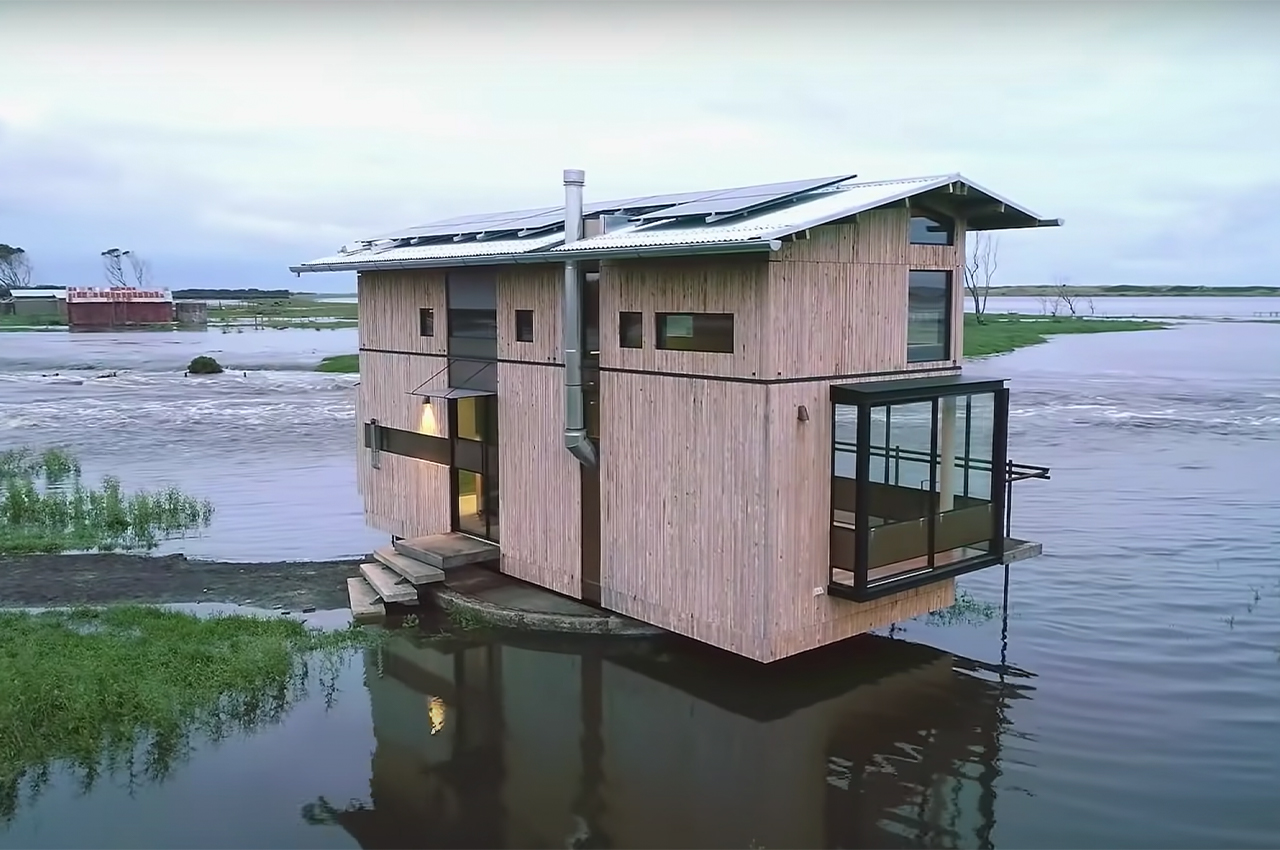 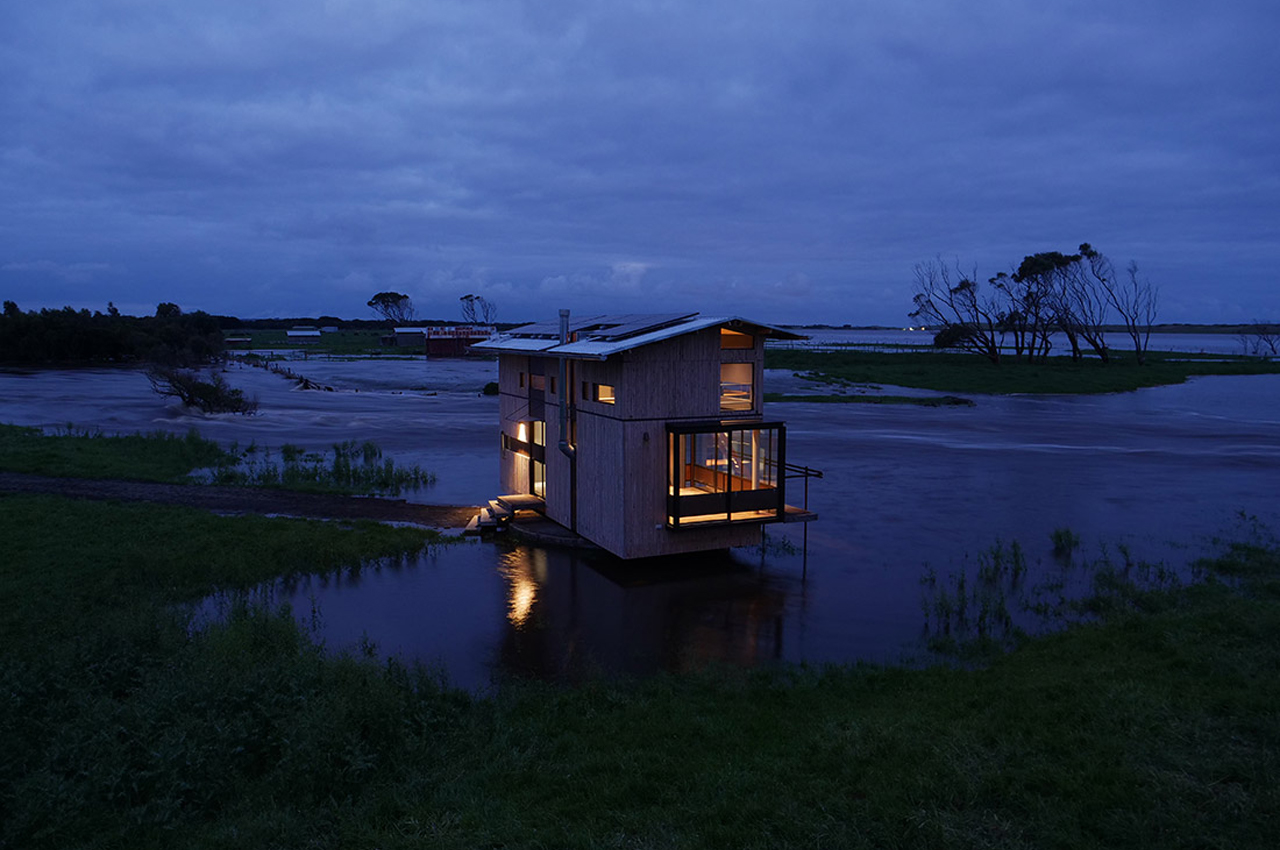 At night, the tiny home glows from the inside out. 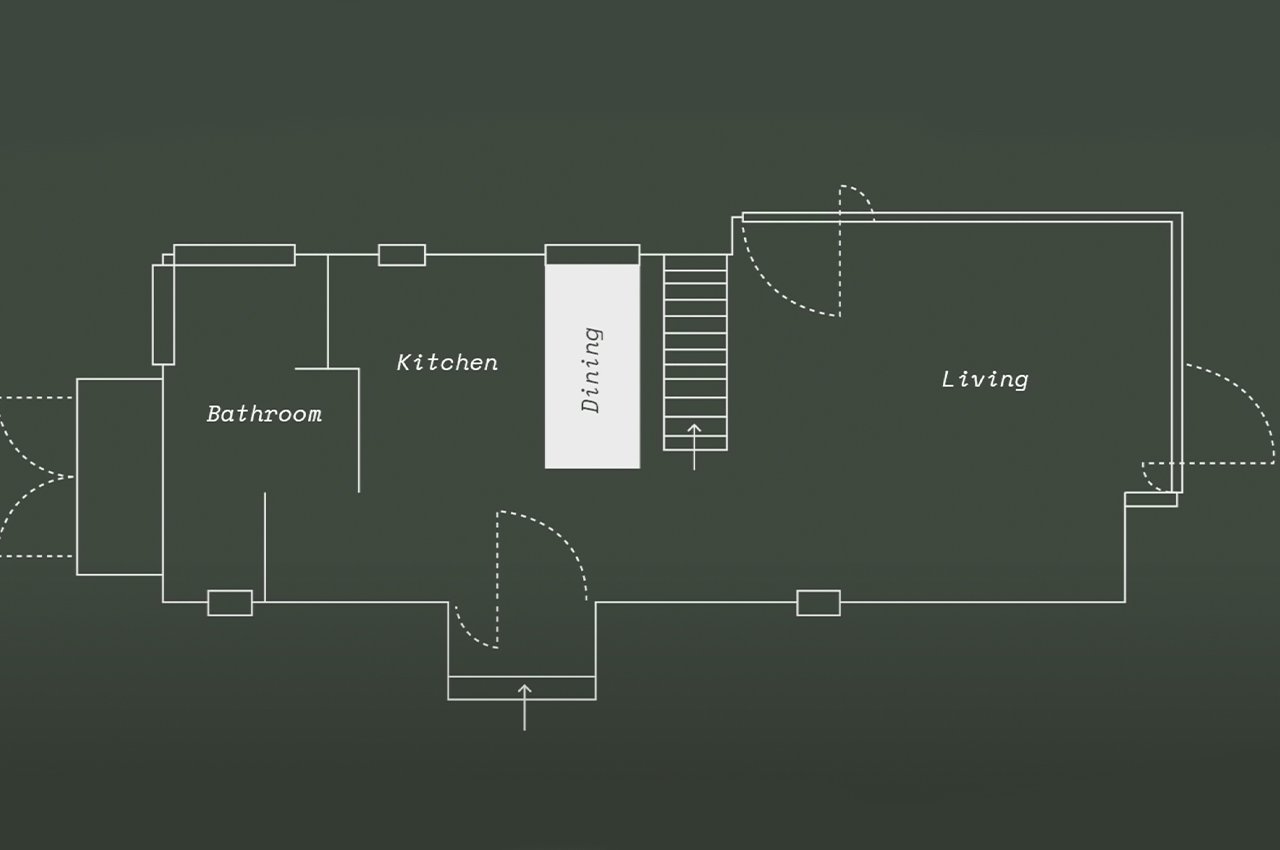 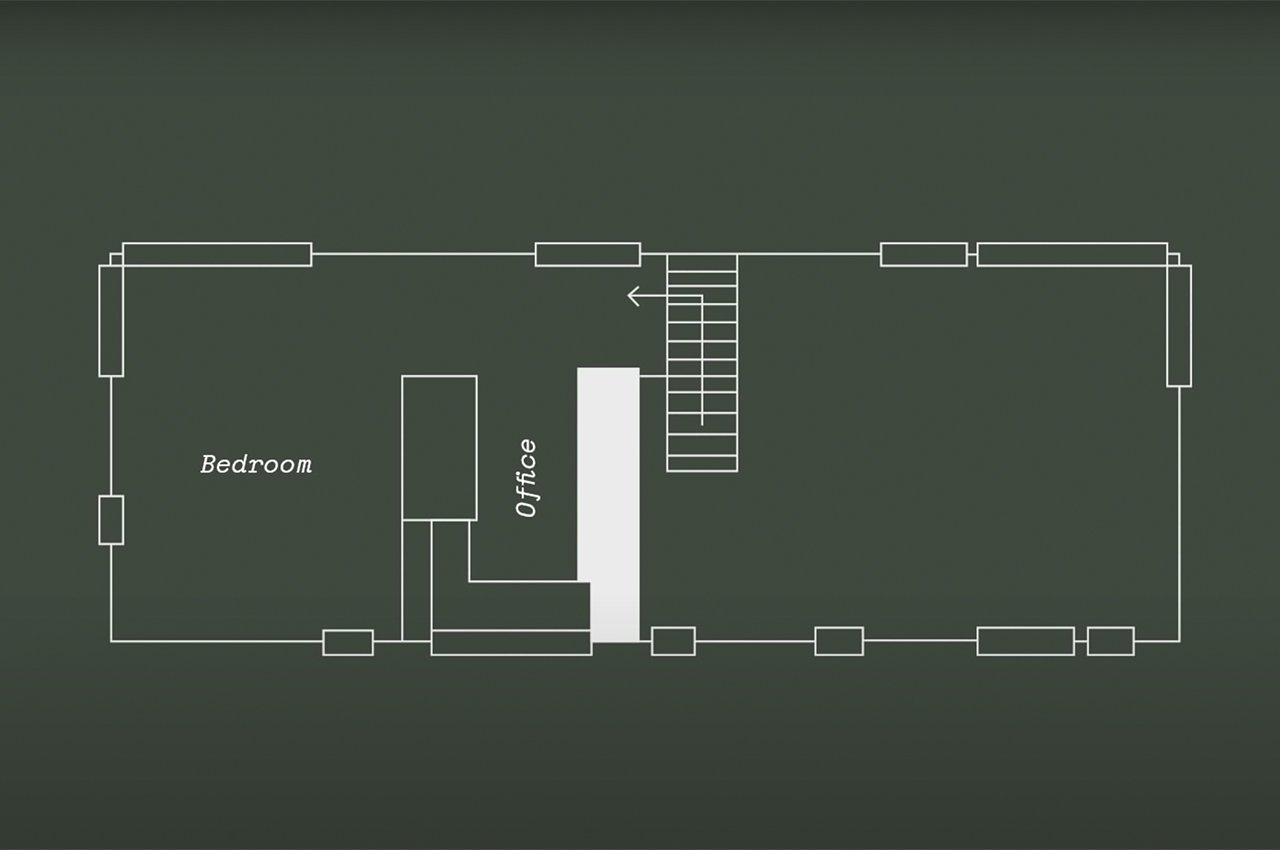 A lot of lunar research facilities or architecture on the moon have been created in the past few years. Each concept is always more innovative…

Merging seamlessly with your wall, this light pops out only when you need it!

Cool and innovative lighting designs can really pump up any living space! Introduce a well-designed lamp with some subtle mood lighting and the vibe of…

A lamp designed to help you establish a healthy sleep routine!

Is the pandemic giving you sleepless nights? If you answer no, please email us and give us your wellness routine. If you answered yes, then…