Commemorating the 50th anniversary of NASA’s first lunar road trip, the Apollo 15 watch by Xeric literally feels like you’re wearing the cosmos on your wrist. The watch features an absolutely stellar design, along with Super-LumiNova coated planetary hands and details on the watch face that glow in the dark like constellations in the night sky, sitting underneath a curved sapphire crystal glass that mimics the curved visor on an astronaut’s helmet. Oh, and on the off chance I forget to mention, it even has a variant with a watch dial made from a real meteorite. 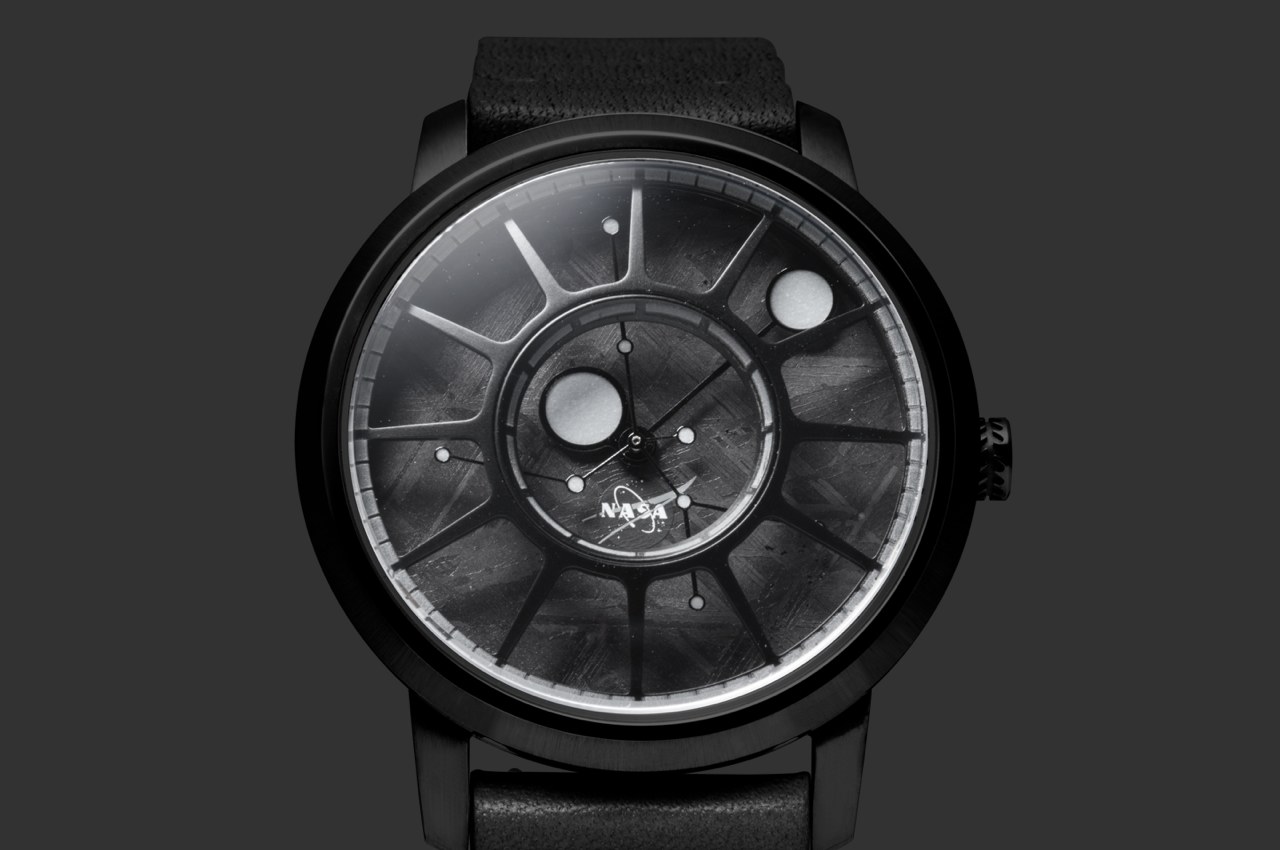 No matter where you look, every single detail on the NASA Apollo 15 watch celebrates space and humankind’s obsession with exploring it. The watch face itself is littered with planetary elements that ‘revolve’ around the watch’s axis. The Apollo 15 watch sports an oddly branched seconds hand that looks like a constellation of stars rotating in the night sky, while the hour and minute hands look like two moons in orbit. 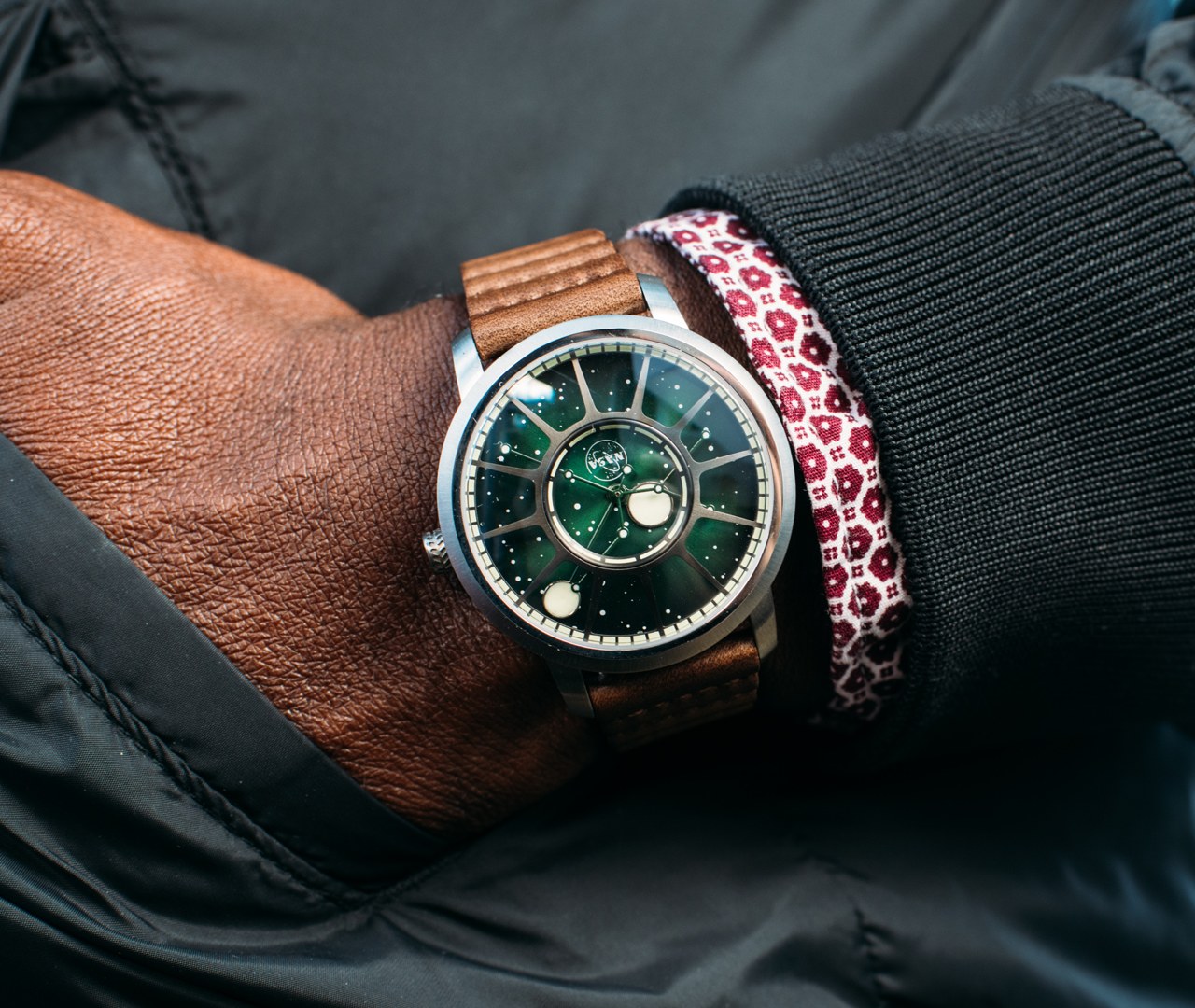 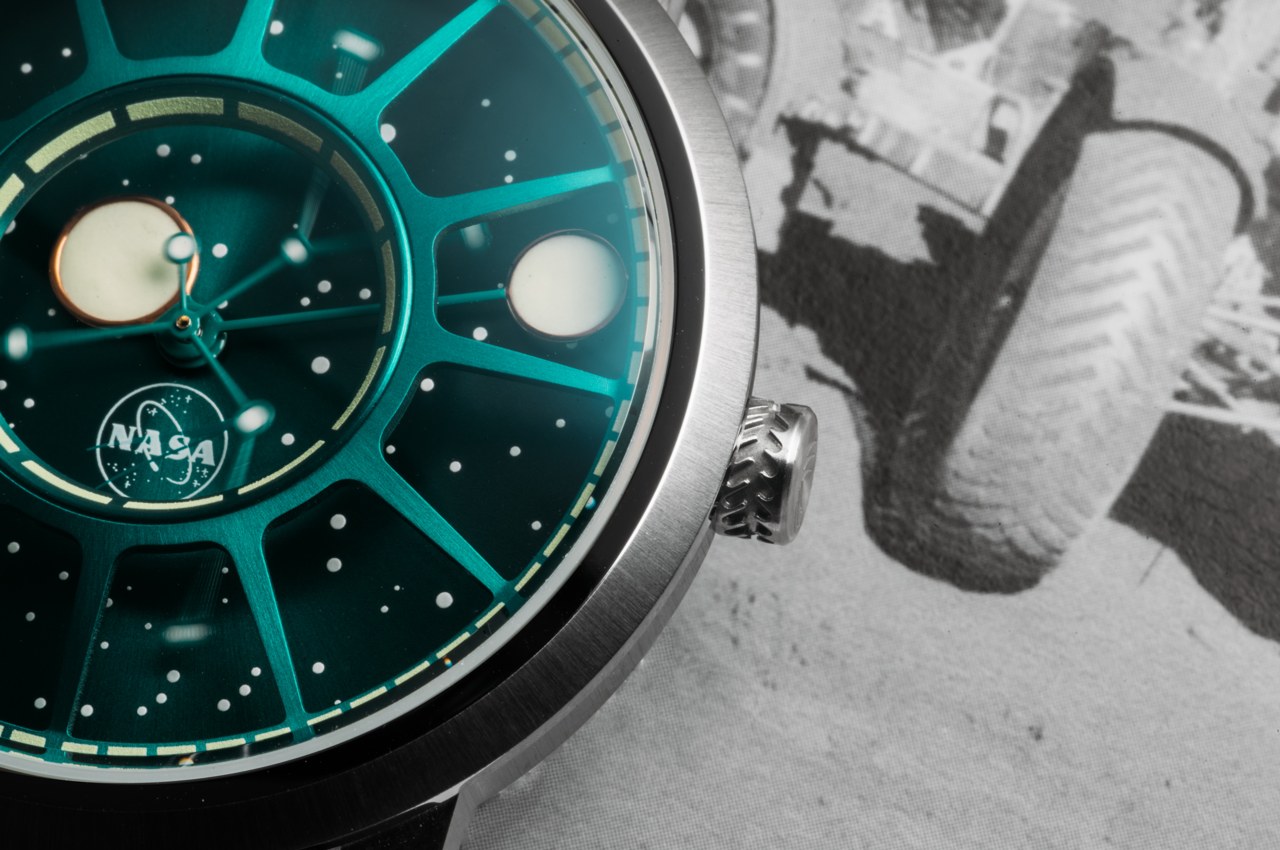 A grill on top of the dial mimics the window grille found on the top of the conical-shaped command module, and even the watch’s crown comes with a pattern mimicking the Lunar Rover’s tire-treads (after all the Apollo 15 was the first Apollo mission to carry a lunar roving vehicle to the surface of the moon) and the mission patch emblem on the top of the crown. Flip the watch over and its back features a meticulous coin-engraved representation of the lunar rover, celebrating its 50th anniversary. 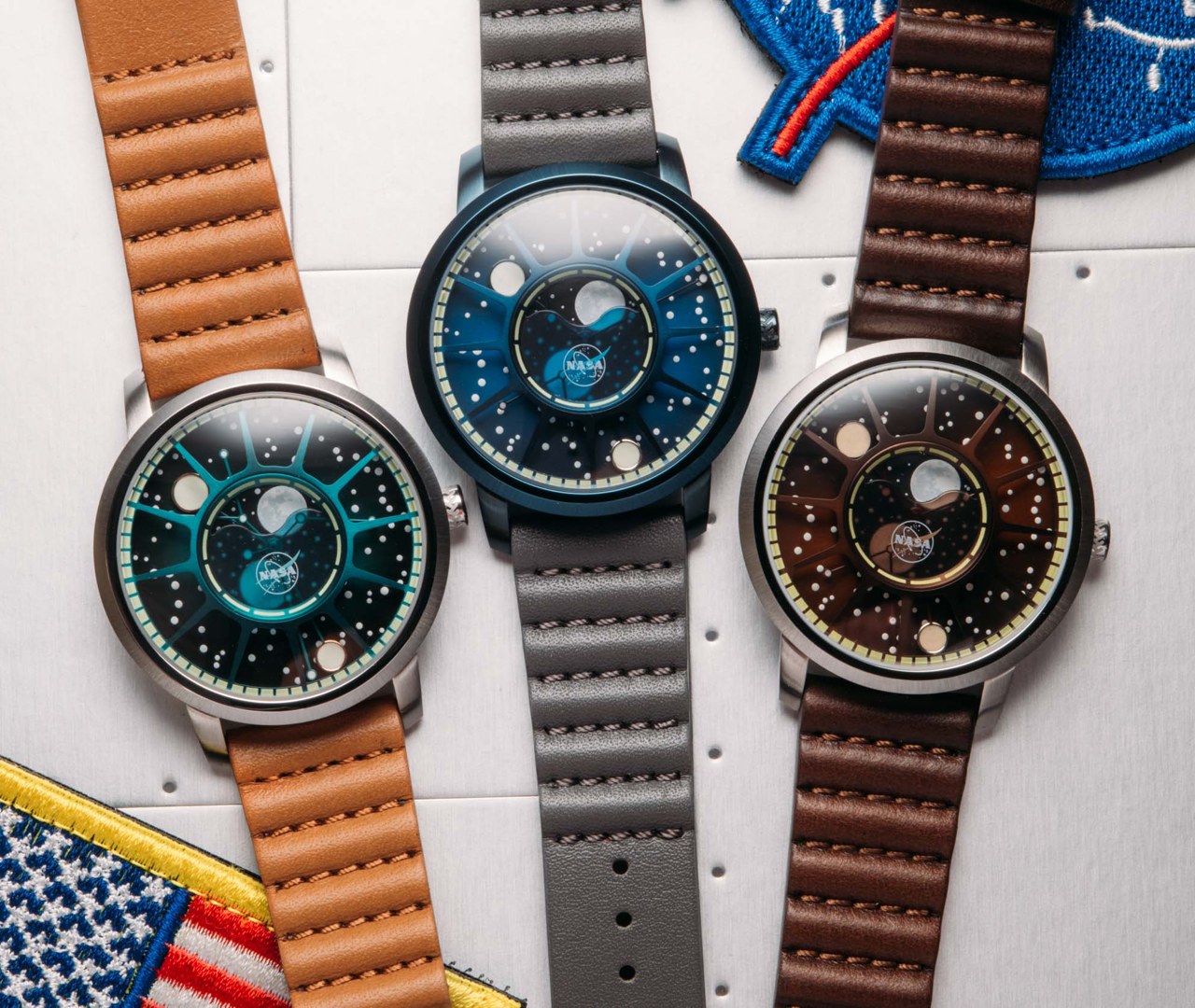 As far as the watch itself goes, the Apollo 15 comes in two broad variants – an Automatic, and a Moonphase – both movements, notably, are assembled entirely in the USA (as a hat tip to the homegrown nature of NASA’s space program). Both of them are fairly identical in their cosmic-inspired design, except for the Moonphase which uses the central circular element of the grille to show off a rotating moon phase subdial. 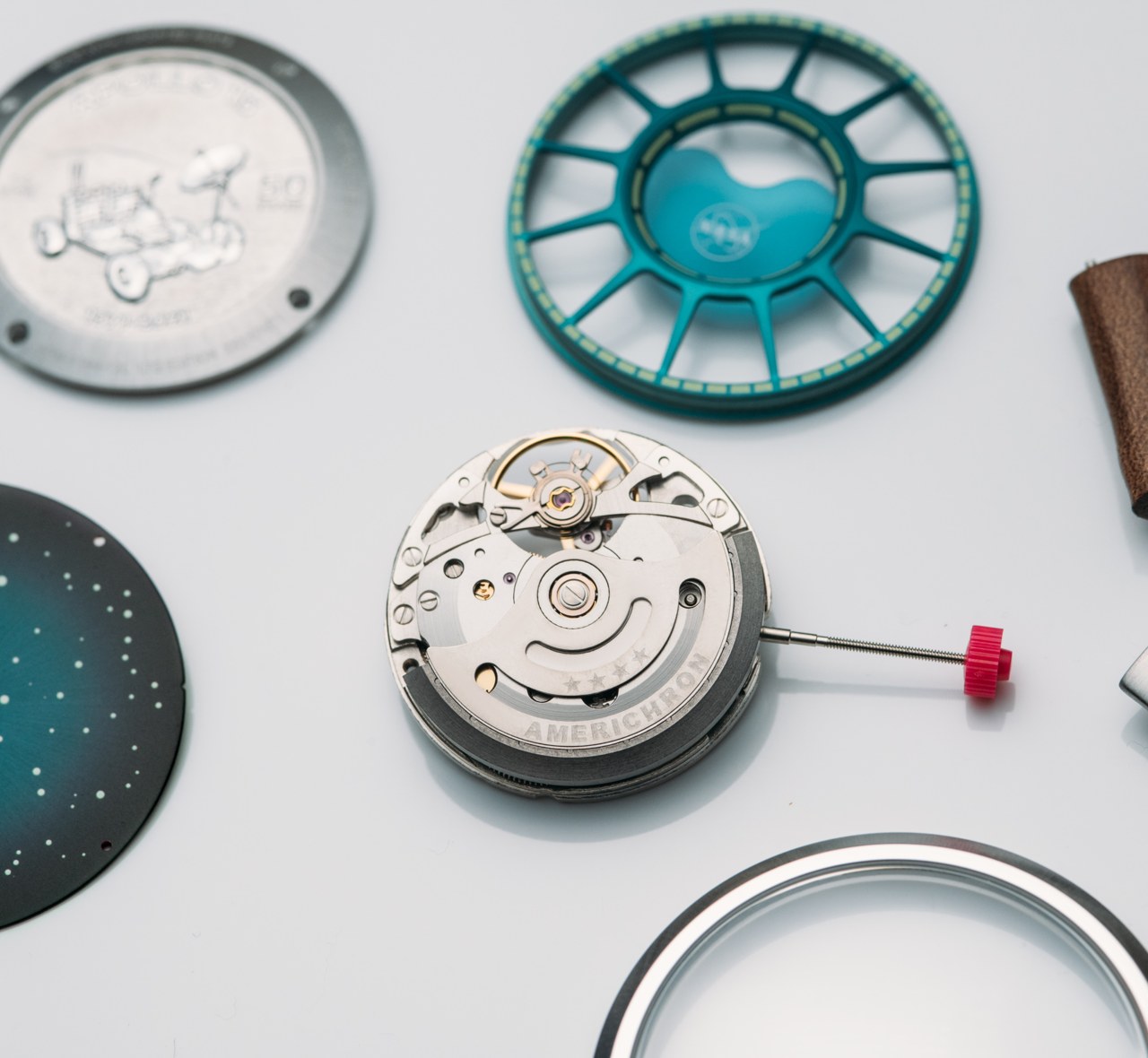 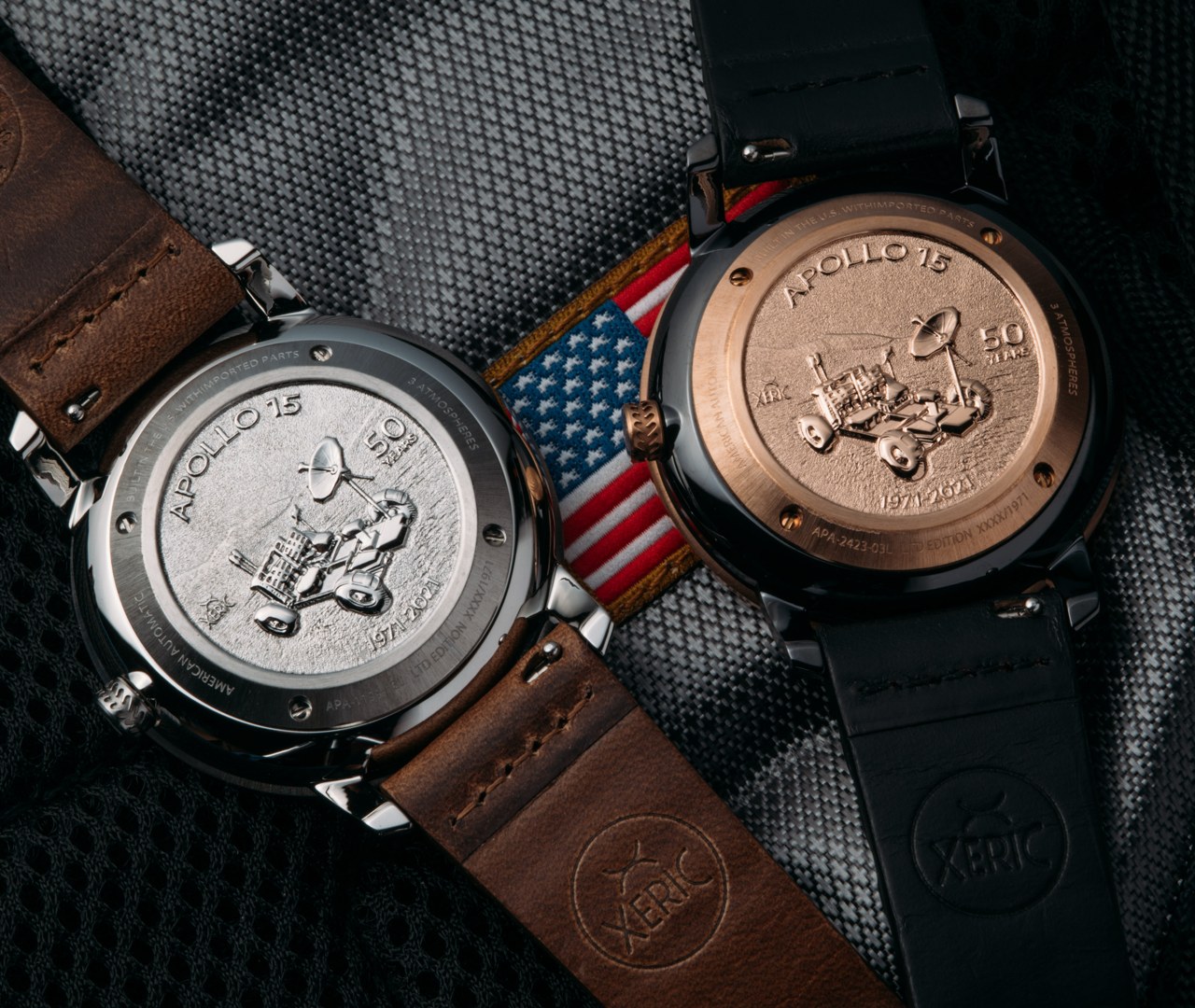 The Moonphase is powered by the US-made FTS AmeriQuartz Caliber 7129 movement, while the Automatic is powered by the Xeric AmeriChron Caliber X3.1 Automatic, which entirely draws energy from the constant motion of your wrist throughout the day. True to its American-made spirit, the watches even sport authentic U.S. Horween-leather straps which pair beautifully with the watch’s 316L stainless steel body, and brilliantly enough, come with ridges on the straps, inspired by the ridged gloves worn by the astronauts on the lunar mission. 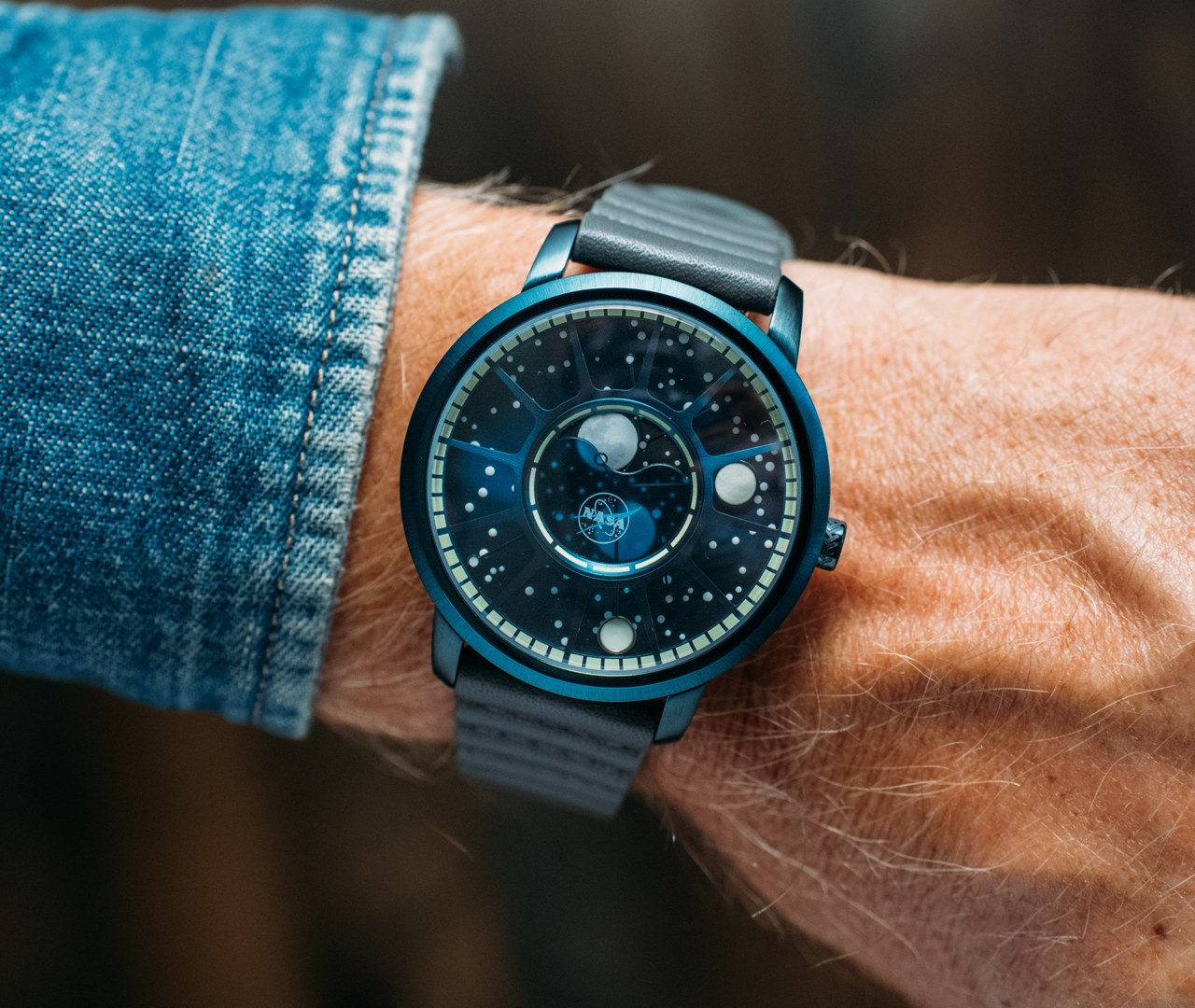 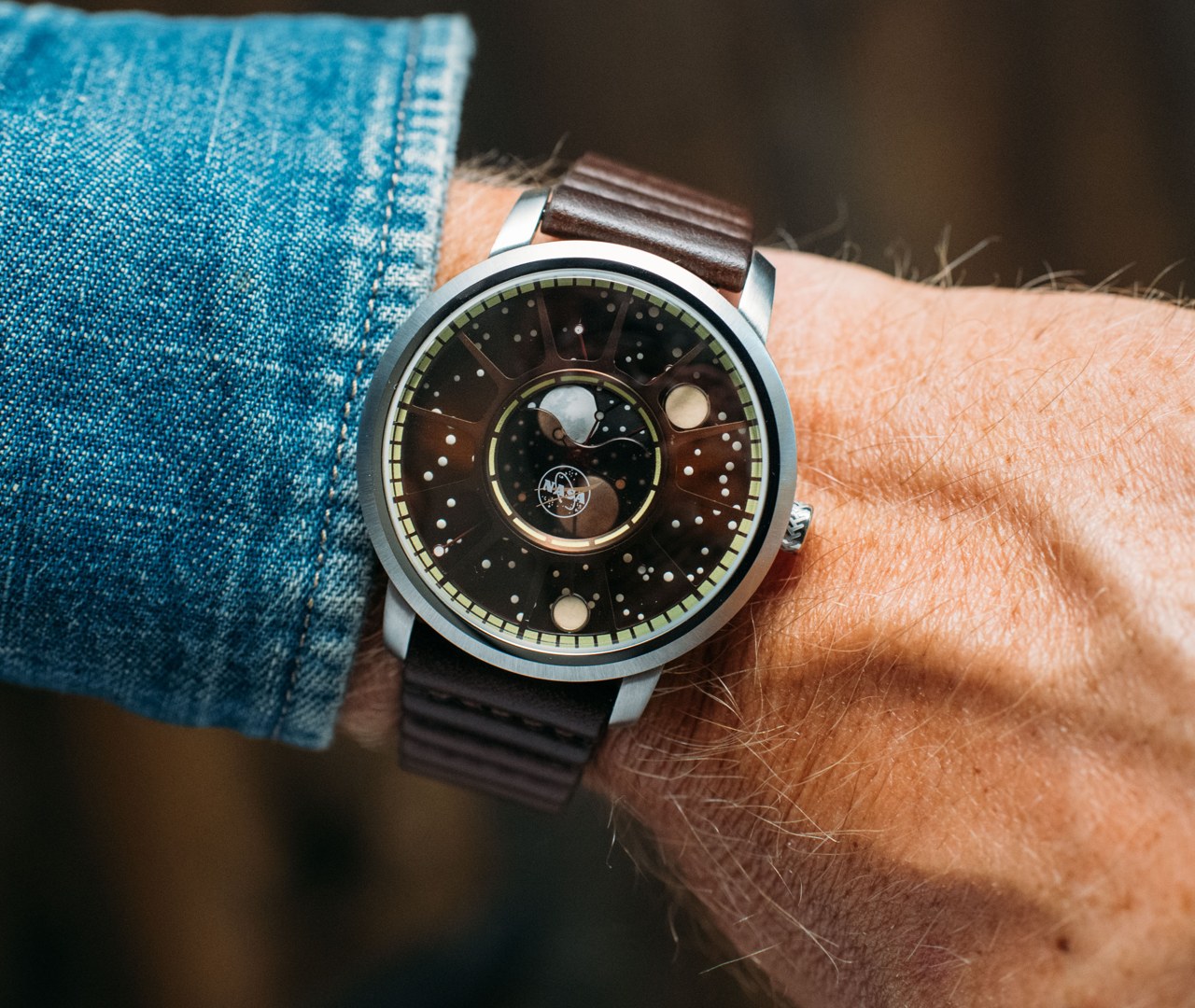 While choosing your watch, you get to pick between Automatic or Moonphase movements, as well as the watch’s overall color-theme. The Apollo 15 timepiece sports a variety of cosmic-inspired color combinations with rather interesting names like Interstellar (silver), Cosmic Nebula (green), Blue Supernova (blue), Moon Dust (gray), and the classic Black Hole (black). 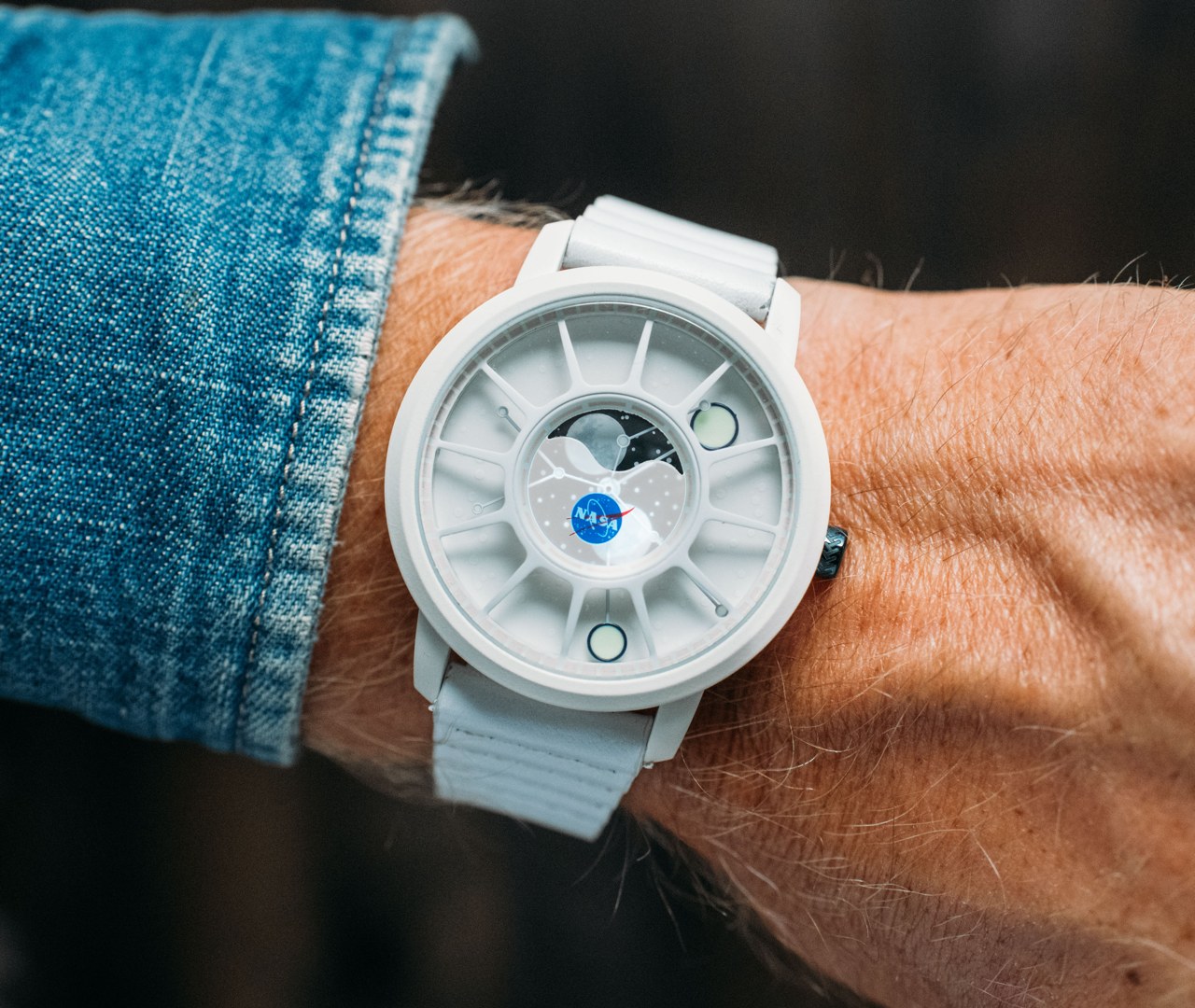 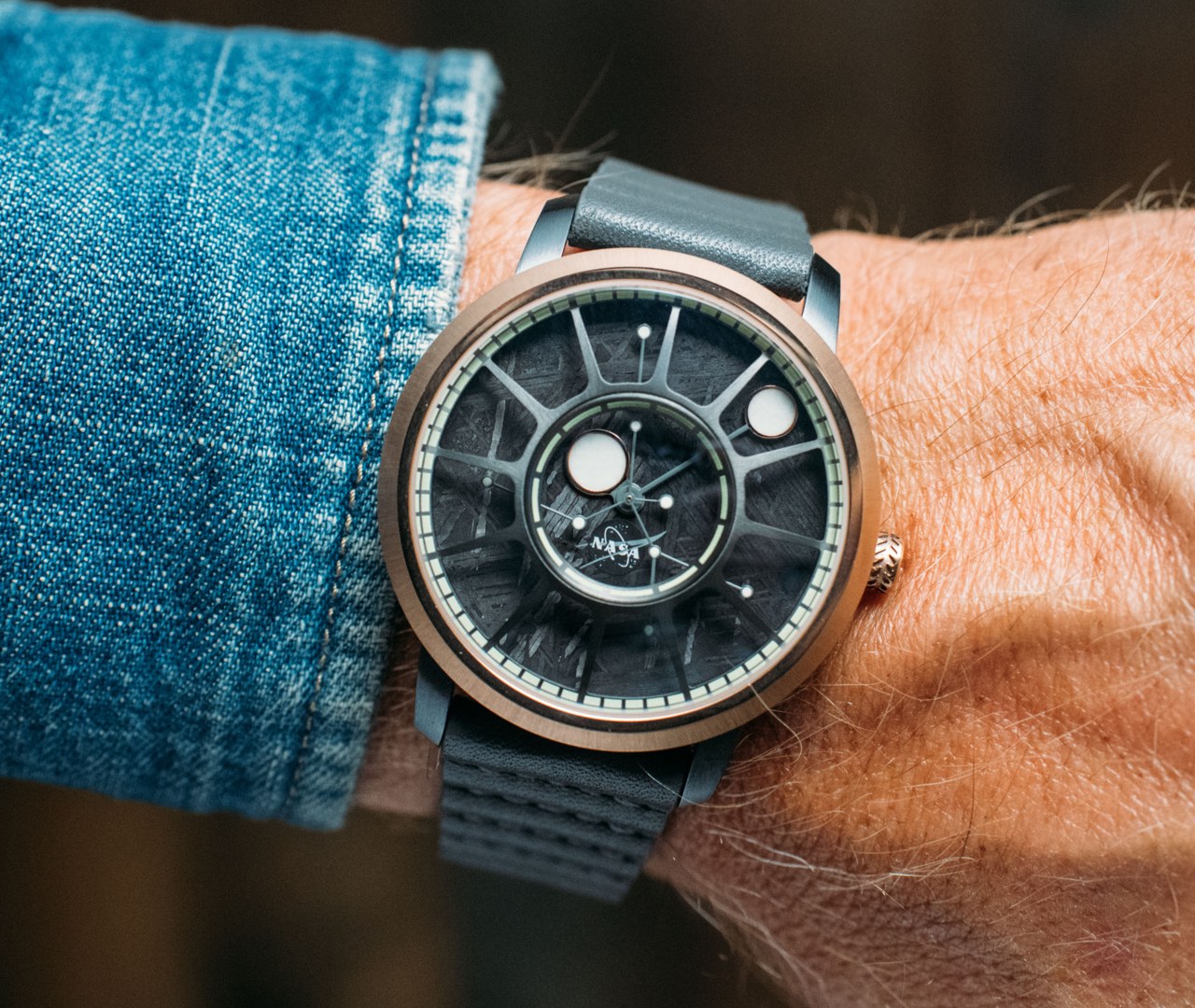 For purists and space enthusiasts, there’s even an all-white variant of the watch made from Cerakote, although the starry-eyed connoisseur will appreciate the Apollo 15’s ‘Meteorite’ sub-variant, featuring a watch-face made from actual meteorite rock cut into circular discs. As is common with meteorite rock, the dial features the unique criss-cross ‘Widmanstätten pattern’, caused by the iron-nickel crystals forming a long structure that reveals itself when etched in acid. 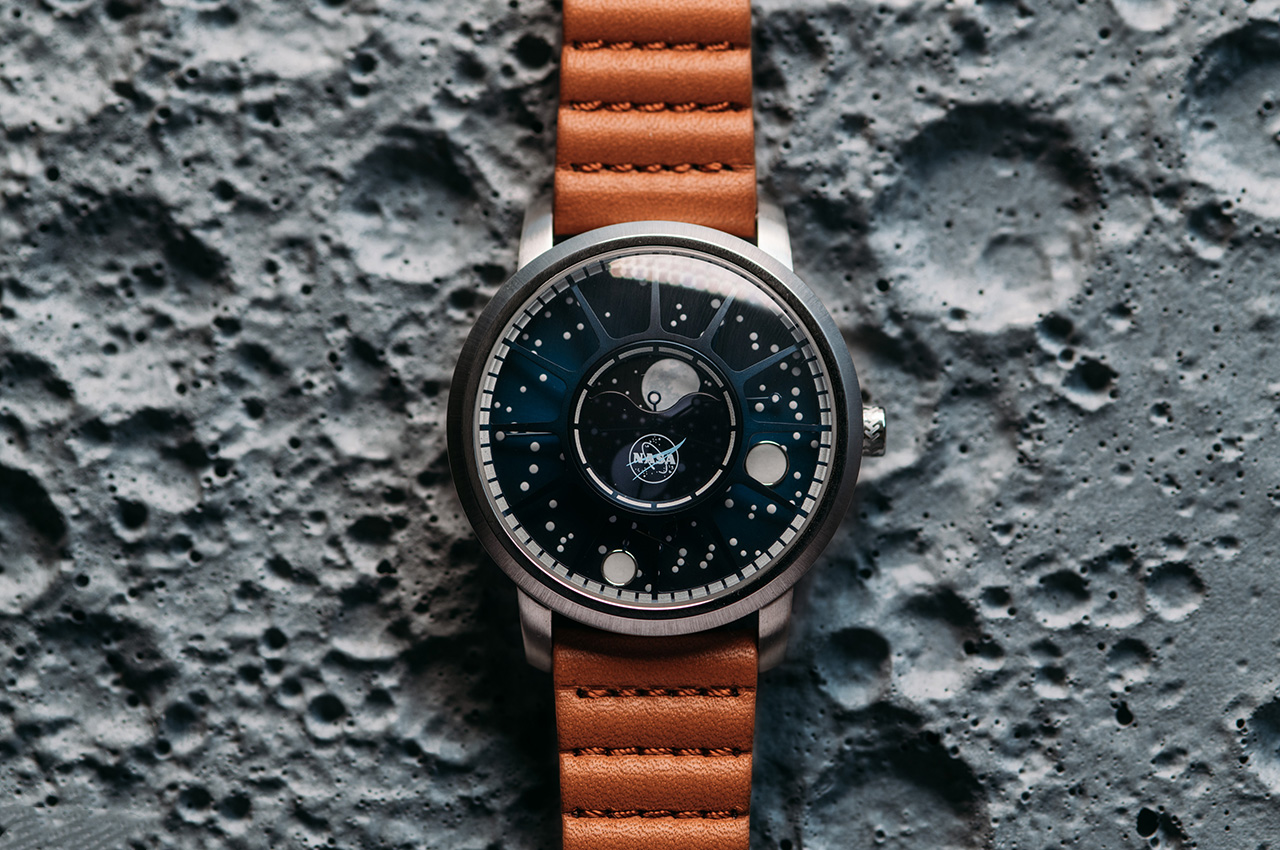 In celebration of the Apollo 15’s journey, carried out in 1971, Xeric is limiting their watches to 1971 units per variant (and just 999 for the meteorite ones because I’m guessing it isn’t really easy to source and work with what’s literally an alien rock). The watches are even individually numbered on the back, right near the relief artwork of the rover. The Apollo 15 watch follows the wild success of Xeric’s Apollo 11 watch, which managed to set a record as Kickstarter’s highest funded watch with $5 million in funding from nearly 18 thousand backers. Funding for the Apollo 15 watches is currently underway, starting at a Kickstarter-exclusive price of $269, or $599 if you also want your otherworldly watch to also sport an otherworldly meteorite dial. The watches begin delivering in March 2022.

Our buddy Dean Heckler of his eponymous Heckler Design has something new up his sleeve called OneLessDrop. It’s a simple, elegant solution to cable management….

This Popsocket transforms into a 5-in-1 functional EDC, making your smartphone adventure ready!

We’ve got used to the simple yet useful EDC’s that come in a multitude of designs and the inherent functionality, lending them a unique USP…