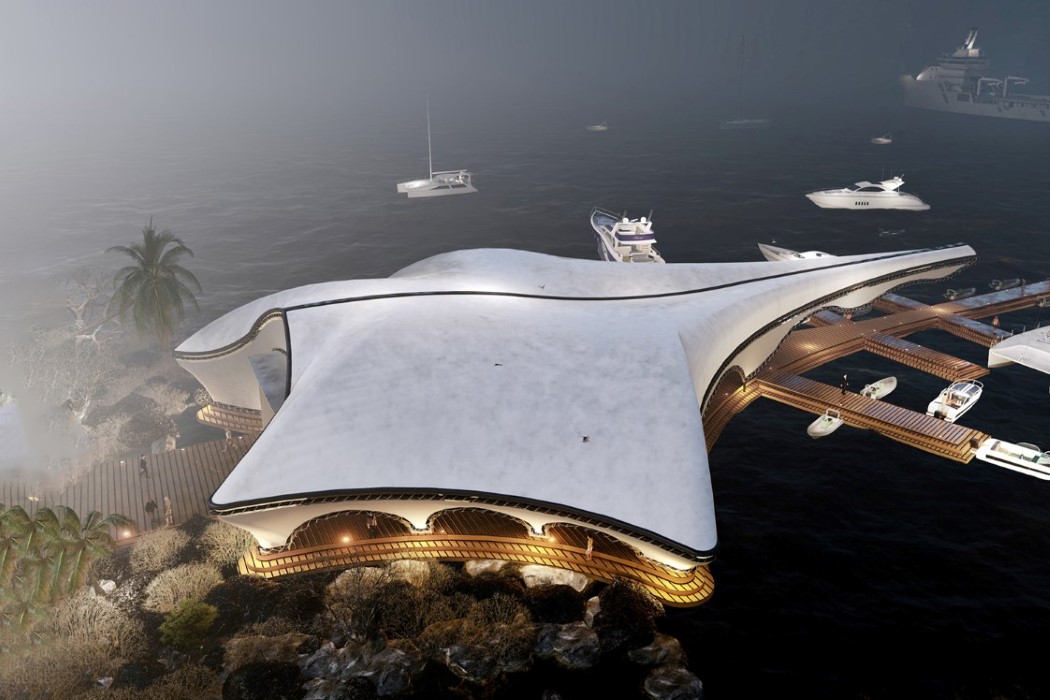 It might be no match for Jeff Bezos’ superyacht (which is big enough to probably have its own yacht club inside it), but there’s definitely a lot that’s awe-striking about Thilina Liyanage’s Luxury Yacht Club. Inspired by the shape of a manta ray, the club sprawls over a chunk of the coastline, providing an area for yacht-owners to mingle while their million-dollar marine-vehicles stay docked around the manta ray’s periphery. The club extends over both water and land, looking almost like a manta ray swimming towards the shore with its tail facing the distant watery horizon.

The Luxury Yacht Club comes from the mind of Sri Lanka-based Thilina Liyanage, an architect and 3D visualizer who’s begun to impress with his nature-inspired architectural marvels. His past projects include a beachside restaurant/shack shaped to look like a massive goldfish, and a set of restaurants inspired by a pelican’s beak, located on the precipice of a cliff. The Luxury Yacht Club is yet another expressive vision from the designer, of a waterfront property inspired by a water-based animal. The resemblance to the manta ray is spot on, with the elaborate use of the right colors, volumes, proportions, and curves. 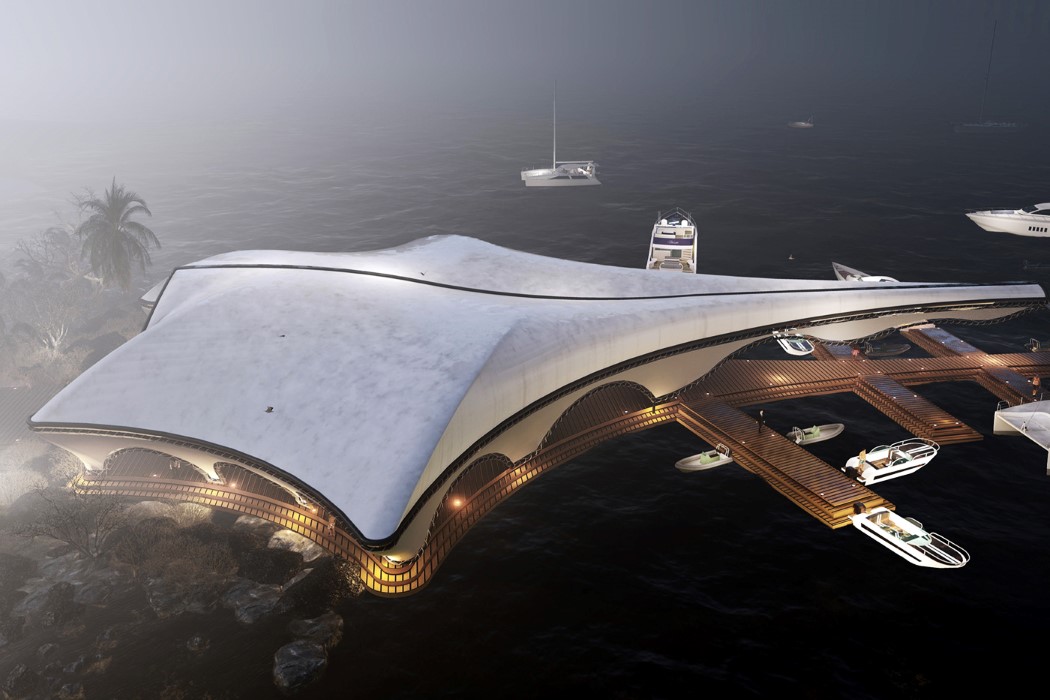 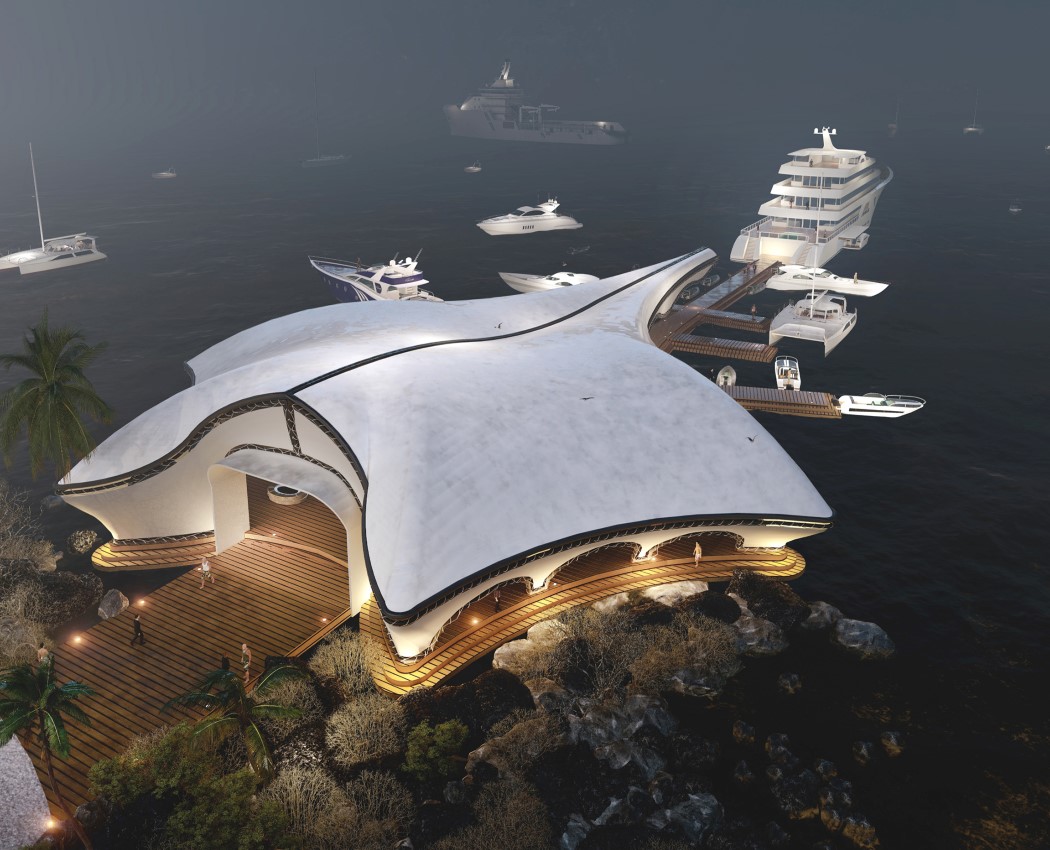 The manta ray-shaped building floats on a wooden pier built on the coast of an ocean or sea, with its large mouth acting as the structure’s entrance and the tail extending off to form the club’s branched piers where the yachts can dock. While the yachts remain docked, the club’s large canopy provides a great space for owners to mingle around. Its spacious design is big enough for a concierge, lounge, bar, restaurant, and a host of other facilities one could expect from an exclusive luxury club meant for millionaires. 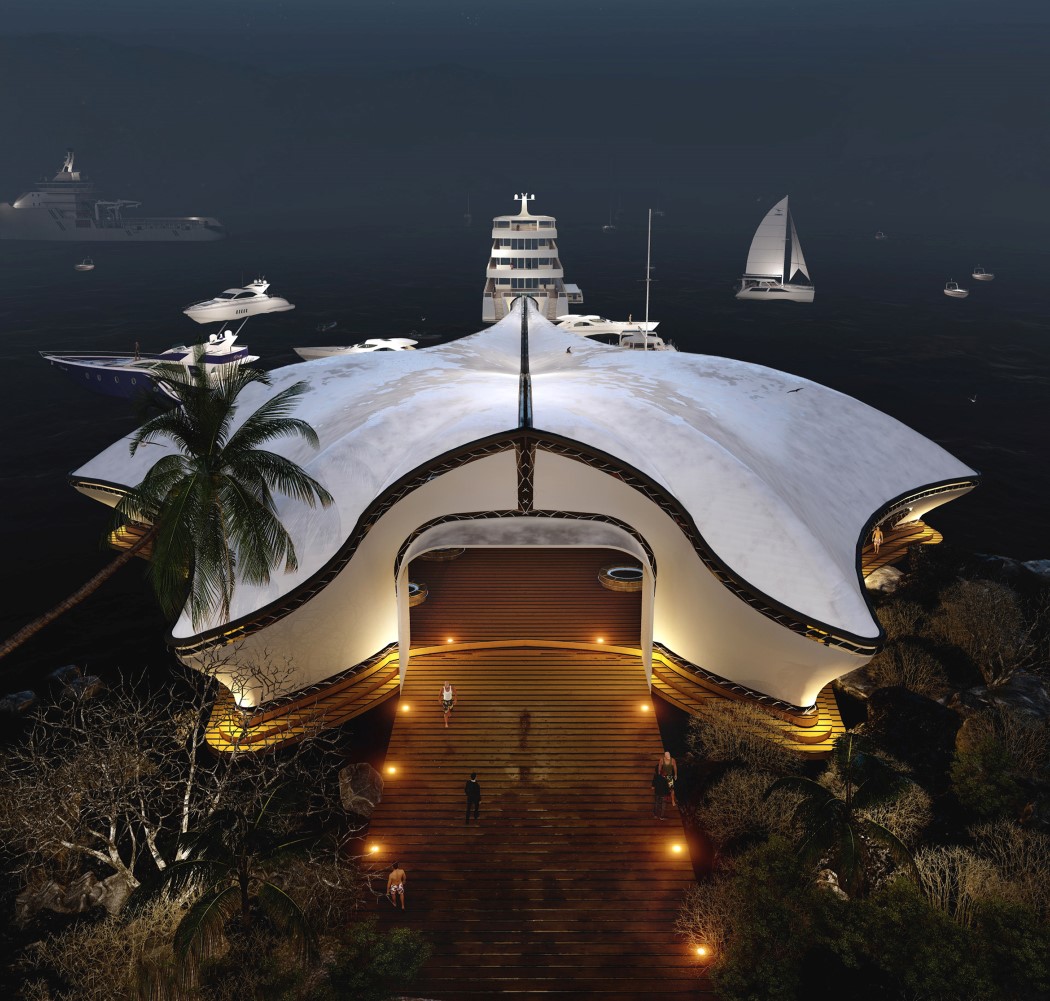 Liyanage tends to resort to the use of bamboo to realize his organic architecture designs, but that’s not the case with the Luxury Yacht Club. Made to be much larger in size than some of his other structures (and to also be able to withstand winds and tides), the club comes fabricated from large metal pipes that are curved to form the manta ray’s basic frame. The pipes are then clad with a canvas or cloth to give it volume while making it look quite like the manta ray’s white underbelly. The fabric helps diffuse sunlight during the day, illuminating the club’s interiors, while allows light from the inside to diffuse outwards at night, making for a wonderful aerial view! 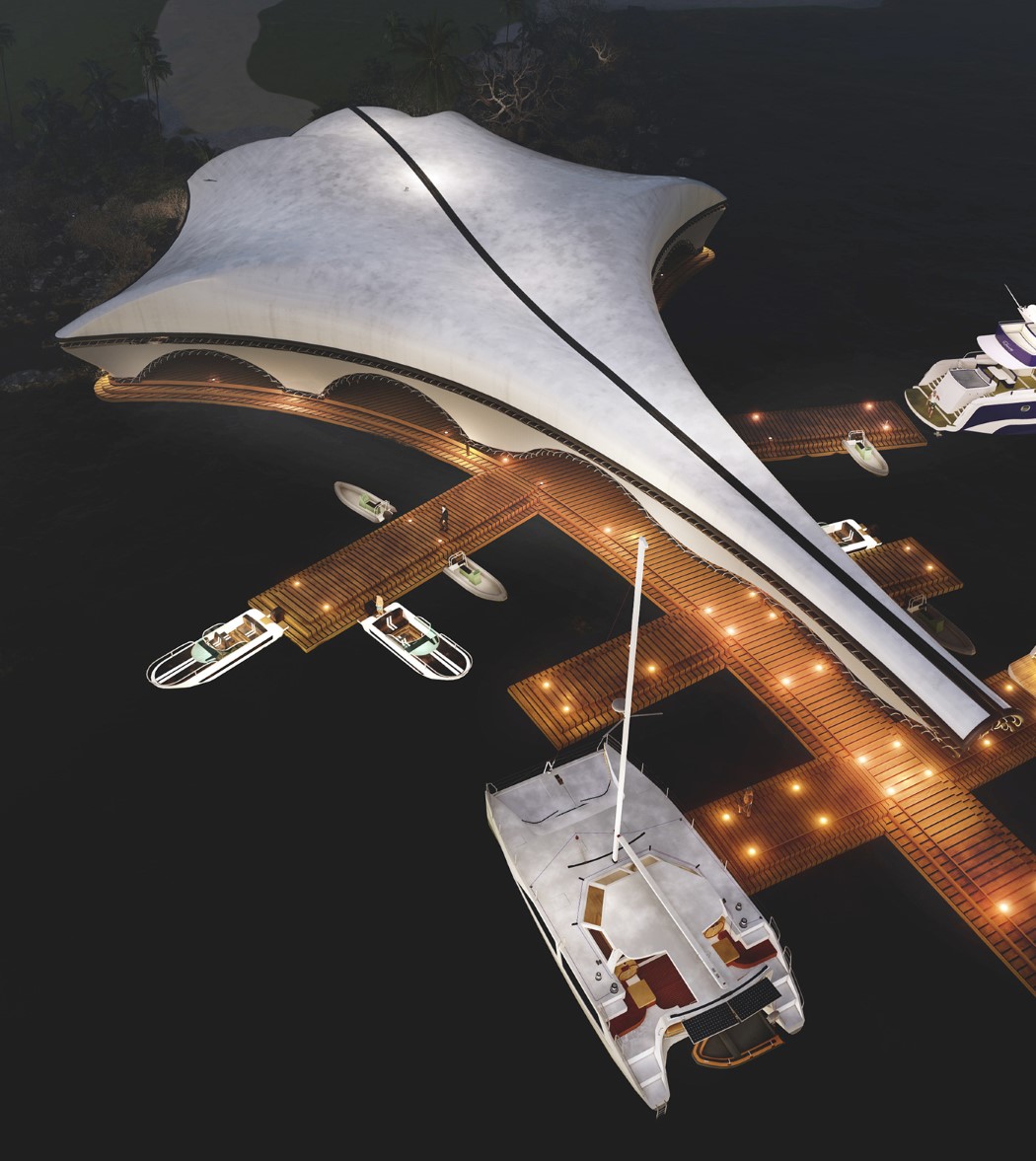 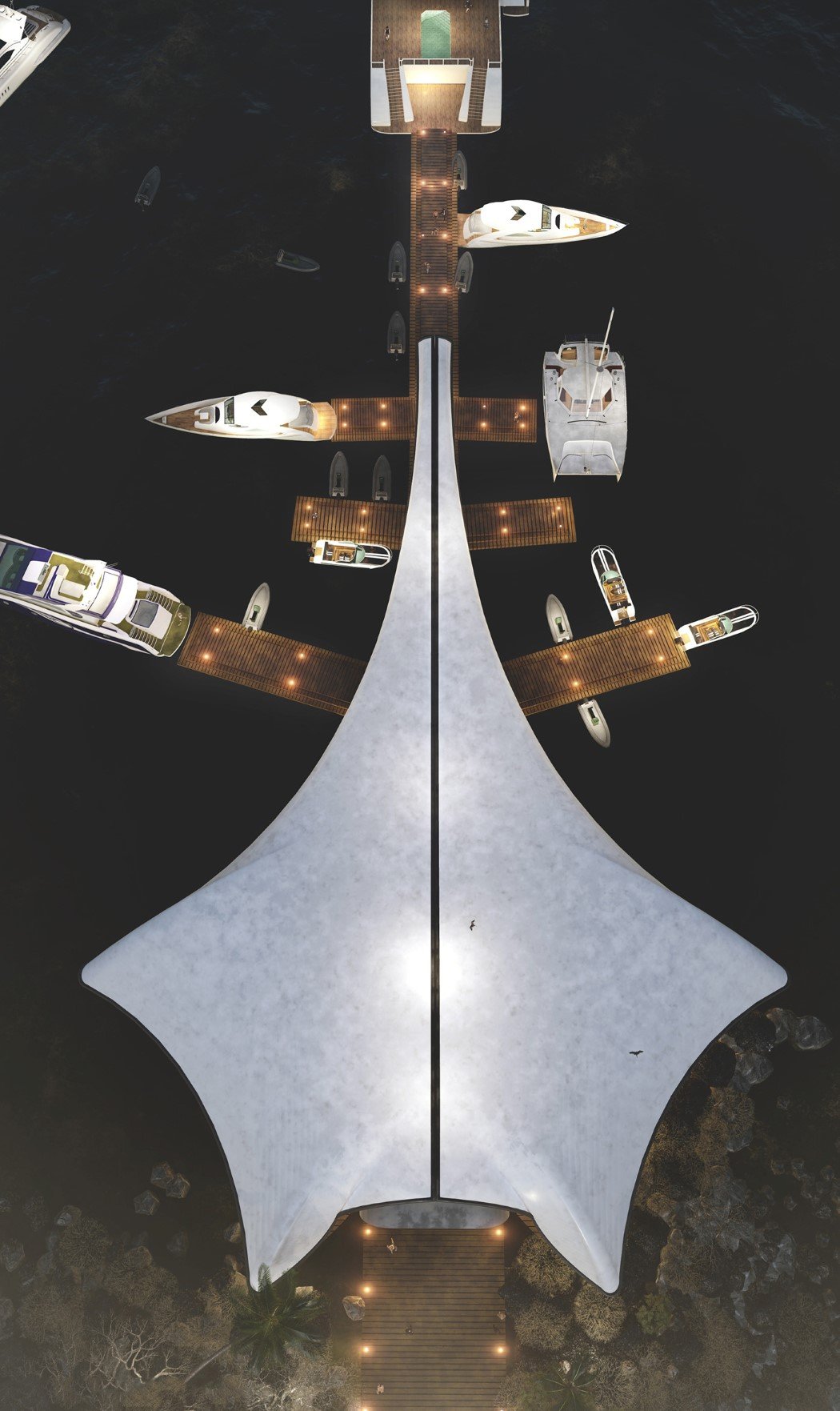 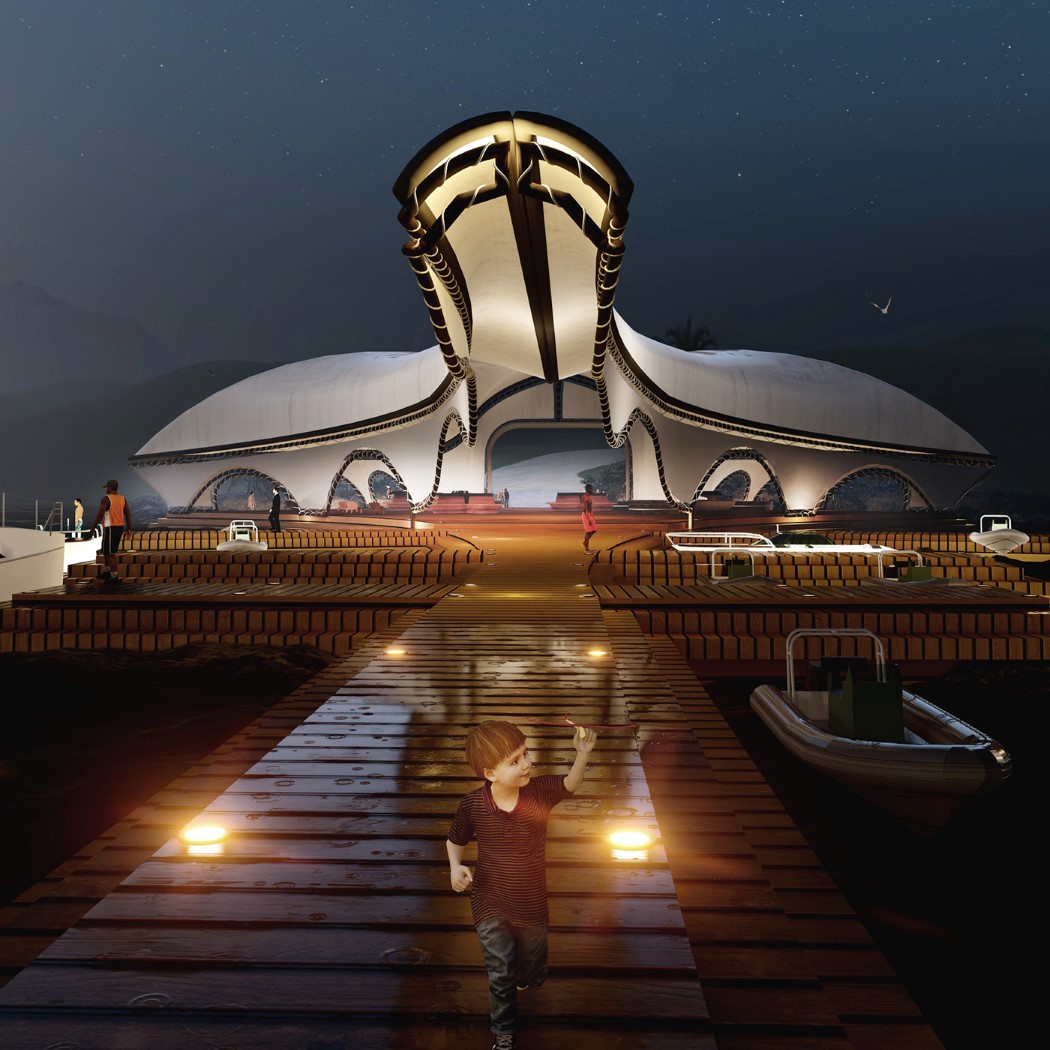 The BMW Welt by Coop Himmelb(L)Au will officially open to the public on the weekend of October 20/21, 2007. Visitors from all over the world…

With interiors that look like fluids frozen in time, the sales office for the CIFI Group located in the Nansha district feels like a set…

This observation tower features a coffee bar that hovers above the clouds for a rare view of Da Lat!

Sweeping the city in a sea of clouds, Da Lat is considered one of Vietnam’s most romantic cities and named to suggest, “City of Eternal…