There’s a reason why the cast iron skillet is used in cartoons as one of the ultimate weapons… because it’s incredibly heavy. Try lifting a skillet made of cast iron (leave alone one filled with food) and you’ll realize that it’s much heavier than it looks – although that’s unfortunately by design. Sure, I’m not discounting the fact that the cast iron skillet is often lauded as the ultimate kitchen accessory. It’s great for grilling steaks, sautéing vegetables, frying eggs, making pancakes and shakshuka, or even cast-iron pizzas! The skillet can be used on a gas stove-top, an induction cooktop, a grill, or even in the oven – but if there’s one thing I could change about the cast iron skillet, I’d probably make it lighter.

The idea of a lightweight skillet occurred to the guys at Prepd too. After the resounding success of their original Prepd Skillet (with over 10,000 backers raising $1.6 million), the team of chefs and designers went back to the drawing board to see how they could make their ultimate skillet even better. The most obvious solution was to redesign its form, eliminating any extra mass wherever possible. The 2021 Prepd Chef Skillet sports a simplified handle with rounded edges to reduce material, and a cooking surface with curved edges that not only makes the skillet lighter, but allows you to easily flip and toss food. The Prepd Chef Skillet comes in 8″ and 10″ sizes, weighing 2.9lbs and 3.8lbs respectively. Each skillet is made from iron that’s cast in molds at 2800°F to create a product that’s great at heat retention and distribution. After casting each skillet, the cooking surface is machine-finished, polished, and bead-blasted to reveal a remarkably smooth surface, before locking everything in with a coating of grapeseed oil and a high-temperature bake to make the seasoning permanent. The finely machined cooking surface and the permanent seasoning make the skillet naturally non-stick too, making it practically last for decades.

There’s also a case to be made about how a lighter skillet is more inclusive. Designed to be easy to hold and maneuver, the fact that the Prepd Chef Skillet is up to 30% lighter than the average skillet means practically everyone can use it, and use it more often. The skillets are easy to clean and require less maintenance. In fact, Prepd even has a set of accessories designed specifically for the Chef Skillet, including a spatula, scouring pad, a leather handle cover, a cast iron lid, and a silicone trivet. Breakfast pancakes, springtime shakshukas, or weekend barbecues, the Prepd Chef Skillet should have you covered! 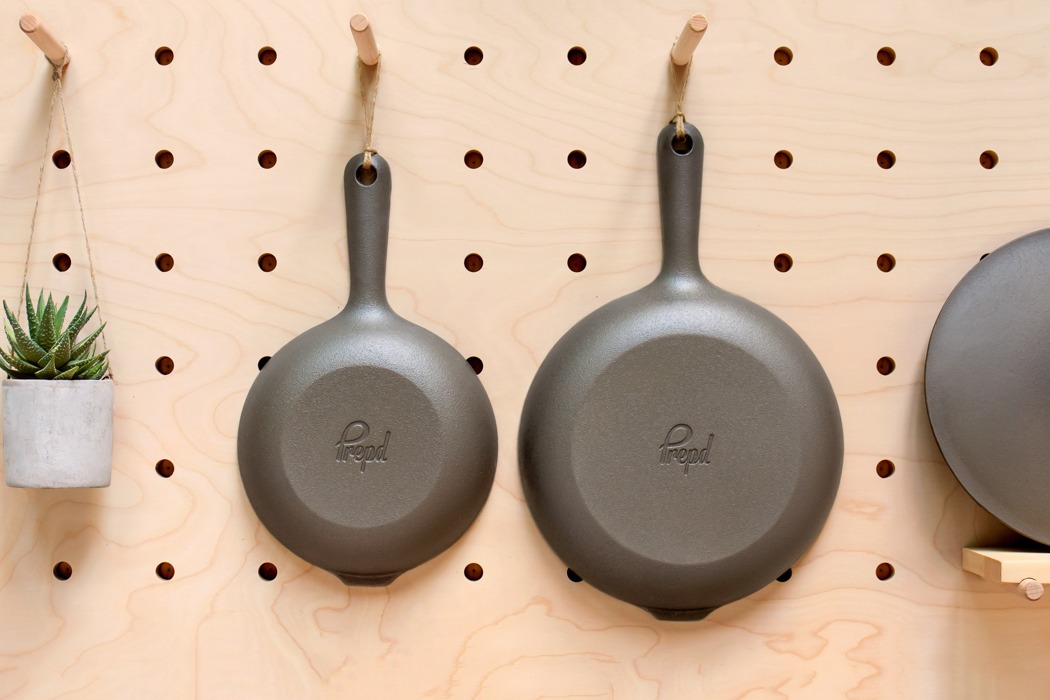 Due to its weight, cast-iron skillet is often overlooked in favor of less capable pans. Prepd set out to change that. The Prepd Chef Skillet is a lighter, smoother, naturally non-stick and more agile cast-iron.

By reducing the design to its simplest, most minimal form, Prepd Chef Skillet is more than 30% lighter than traditional cast-iron without compromising its unbeatable searing power. With it, you can sear, bake, fry, and even sauté – it’s the ultimate everyday pan! 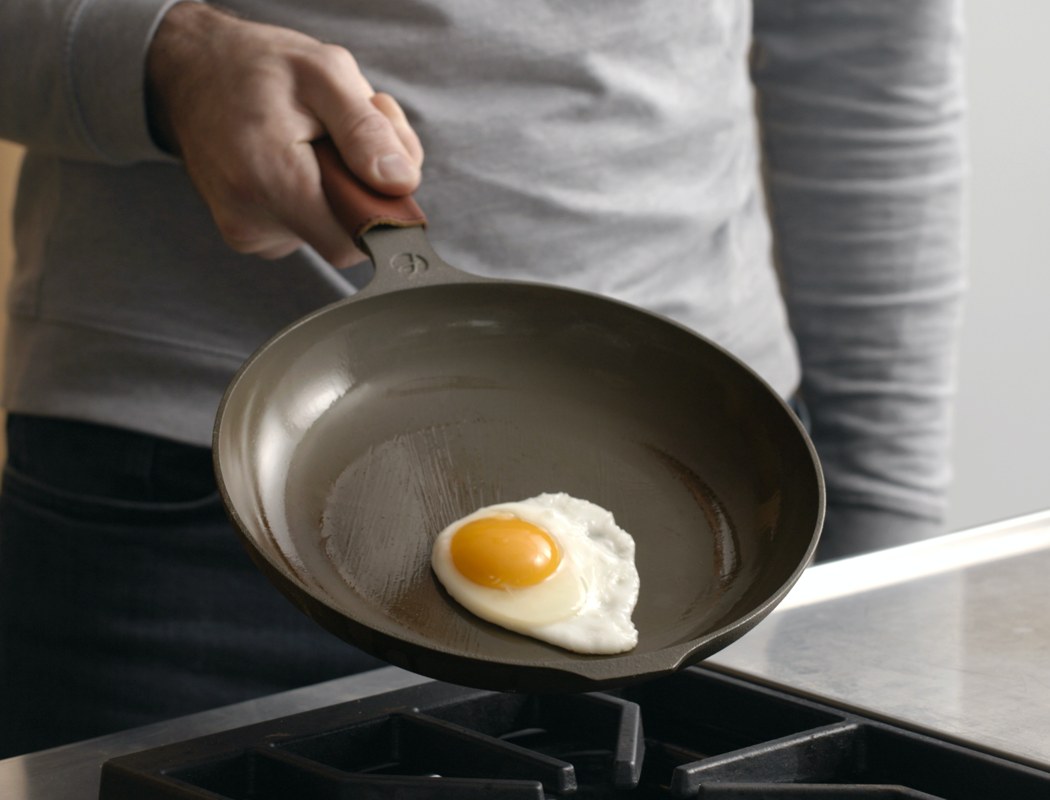 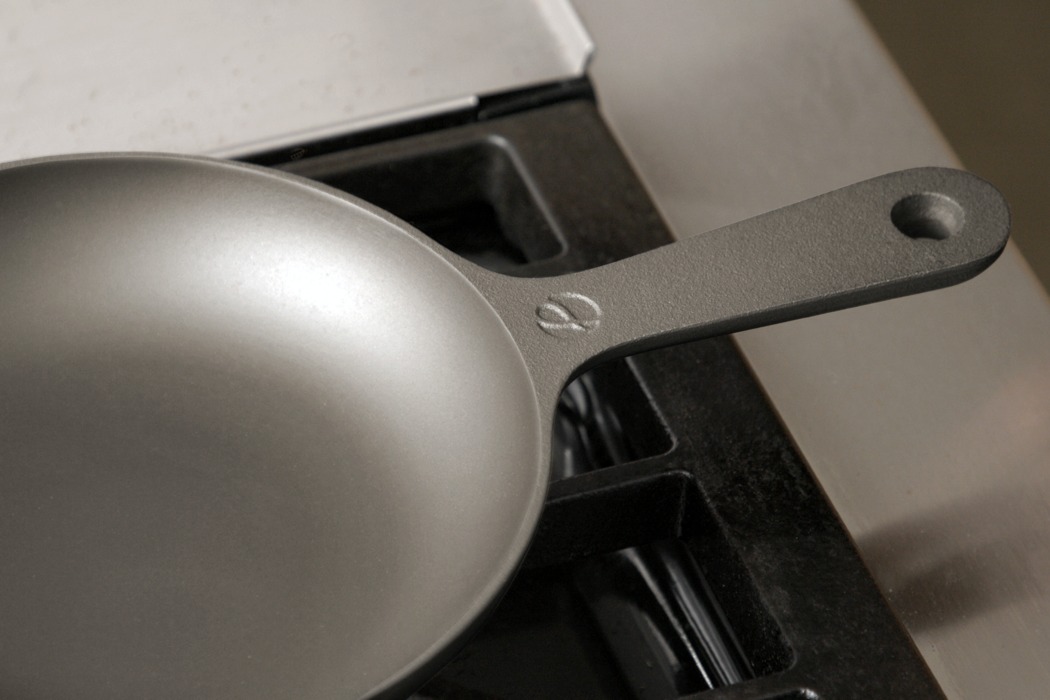 After polishing, the pan is seasoned with 4x layers of grapeseed oil, baking each layer at high temperature for over an hour. The extra hours of polishing and seasoning result in an incredibly smooth, naturally non-stick finish — without any of the synthetic chemicals, so you can cook at high heat without any worries.

Due to its lighter weight, Chef Skillet is surprisingly agile and easy to maneuver. And combined with its contoured shape you can easily move ingredients around the pan so you can sauté like a pro.

At the same time maintaining the key advantage of cast-iron – its unbeatable searing power. Chef Skillet will become your go-to pan for everything from frying eggs to baking your favorite dessert.

The Most Versatile Pan

Prepd Chef Skillet works on any style of cooktop, from gas to induction – even the grill… or the oven!

Unlike other types of pans, cast-iron cooks food evenly — not just on the surface. Cast-iron has far superior heat retention and the greatest thermal mass, so it can transmit heat far beyond the surface of the pan. This results in unbeatable sears, juicy roasts, and perfectly golden bakes that no other pan can offer.

Prepd Chef Skillet can do the job of a roasting pan, a stainless steel skillet, and a non-stick, all in one!

The Perfect Size for One

The Chef Skillet comes in both 8″ and 10″ versions. The 8″ size is ideal for making individual meals. Perfect for your weekend shakshuka brunch or treating yourself with a skillet cookie.

Prepd Chef Skillet is an investment that will last many generations, and better yet, it will only improve with age. Every use adds to the layers of seasoning, so your skillet will become even more non-stick the longer you use it.

The team also designed a set of matching accessories to help you get the most out of your Prepd Chef Skillet – from cooking to cleaning, to serving. So you’ll be Prepd for any situation! These accessories include a leather handle cover, a table trivet, a chain mail scrubber, a slotted turner, and lids to fit both sizes of the skillet.

The Cook n’ Roll is super compact but has all the necessary equipment for basic food prep and cleanup – cooktop, dishwasher, sink, oven, storage…

Got bored with the same old hand tools in your cabinet? Then you need to consider the uber-cool TYR hand tools designed for modern users…

The simply named Road Lights is a system of wind generated lane lights powered by the wind of vehicles whizzing by. You’ve all felt it…

This wall-mounted record player syncs to your phone for mobile control, is an instant conversation starter

This tremendous idea of amalgamating analog and digital is the brainchild of Oscar Olsson, and on the wall, it looks darn cool and futuristic. The…