Chop it like its hot! I’ve always wanted to say that but this chopping board truly is one of the best designs I’ve seen and it is 100% going on the top of my kitchen essentials list. Chopbox is a smart chopping board that has so many unique features but the most relevant one in these ‘unprecedented times’ is the fact that it can actually kill germs on your cooking tools and space! Get rid of counter clutter and those extra kitchen accessories with this much-needed upgrade.

You can easily sanitize your knives and cutting surfaces, embrace your inner quarantine chef with germ-free cooking thanks to Chopbox’s built-in disinfecting UVC light – see I told you, this board is lit and literally! We clean our knives but do we ever think about the germs in knife blocks or the crevices of our cutting boards? With Chopbox all you have to do place your knife in between the two cutting surfaces and activate the small but powerful 254nm UVC light that can sanitize up to 3 knives at once as well as both the cutting surfaces. “Just one minute of UVC light exposure is guaranteed to kill 99.99% of germs and bacteria. The 254nm UVC light used in the ChopBox is small and has a limited angle with only a small gap in the boards when in use. It is 100% safe for all humans to be around and near this light. The UVC light will automatically switch off when you separate the two boards or you can press the second button on the control panel to turn it off. You will receive no negative side effects from this UVC light,” says the team.

With two cutting surfaces, you can switch between veggies and meat to avoid cross-contamination. Use the smaller cutting board for food scraps, as a side piece to store chopped produce, or for transferring the ingredients to the stove. The clever design even lets you replace the main cutting surface when needed. Another interesting feature of Chopbox is that it can also weigh your food with a built-in scale. The middle button on the control panel is used to switch between grams, ounces, pounds, kilograms, and a tare function for accuracy so you always have the right portions. Kitchen timers are not revolutionary but this one is integrated on the surface itself and can run for 9 hours! Chopbox also has two replaceable knife sharpeners on the right edge of the board – one is made with a diamond stone and the other is made with a ceramic stone so you adjust your level of sharpness accordingly.

Chopbox is not only smart, but it is also strong and can hold 150 pounds of weight. It is crafted sustainably using bamboo wood which was used for its hard density, durability, and affordability. The board and its replaceable parts are all 100% recyclable as sustainability is important to the designers and the consumers. It runs on a 3000 mAh battery that lasts for 30 days of daily use on a one-hour charge cycle. It is also waterproof and is rated IPX7 which means it can withstand being in water up to 3 feet deep! Since this is a smart cutting board with batteries and other tech features, it is not meant to be put in a dishwasher as the heat will cause damage to an otherwise long-lasting, multifunctional appliance. Even Gordon Ramsay will only have nice things to say about Chopbox! 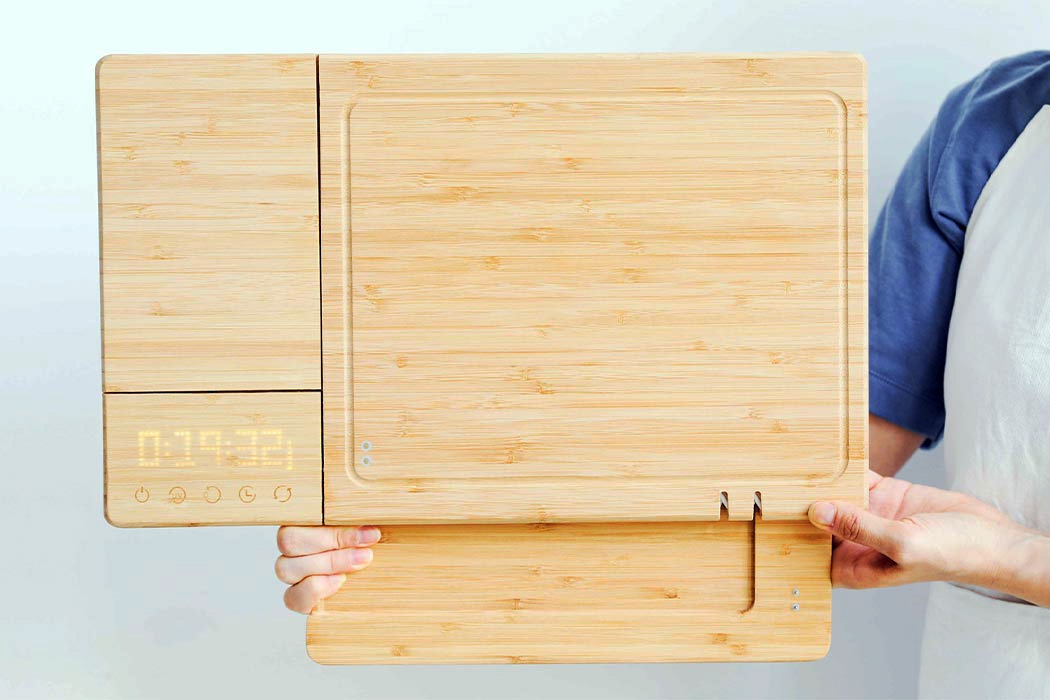 ChopBox: Smart Cutting Board With 10 Features

Chopbox protects you against germs and bacteria

Did you know that knife blocks, drawers, and even regular cutting boards harbor tons of bacteria and germs? It seems like no one talks about it, but the hidden germs in your kitchen are very real. 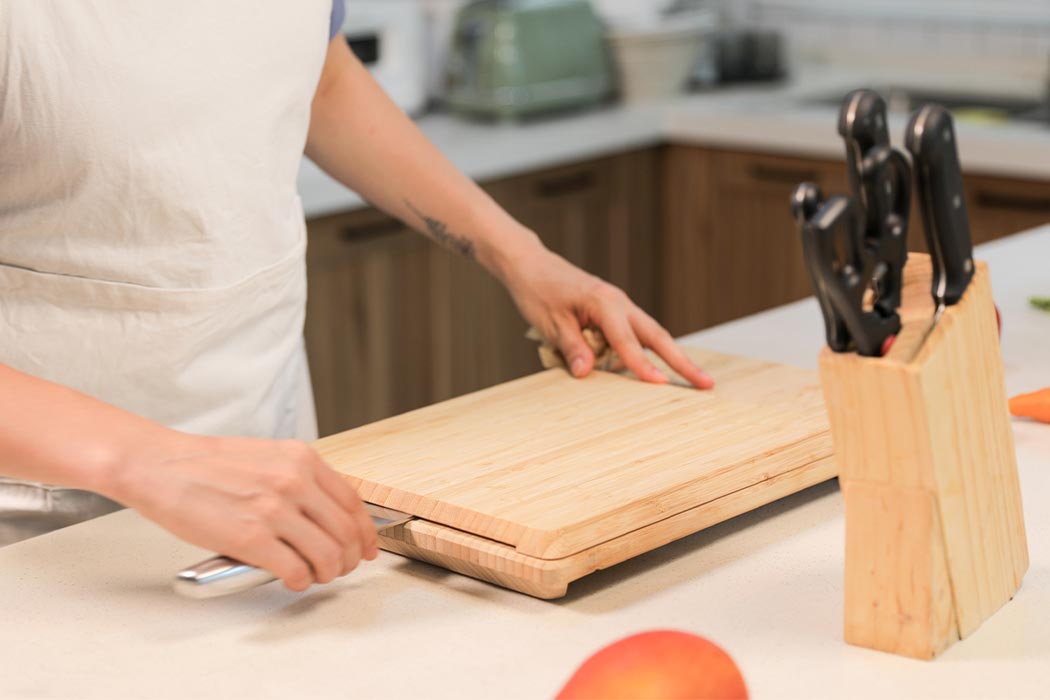 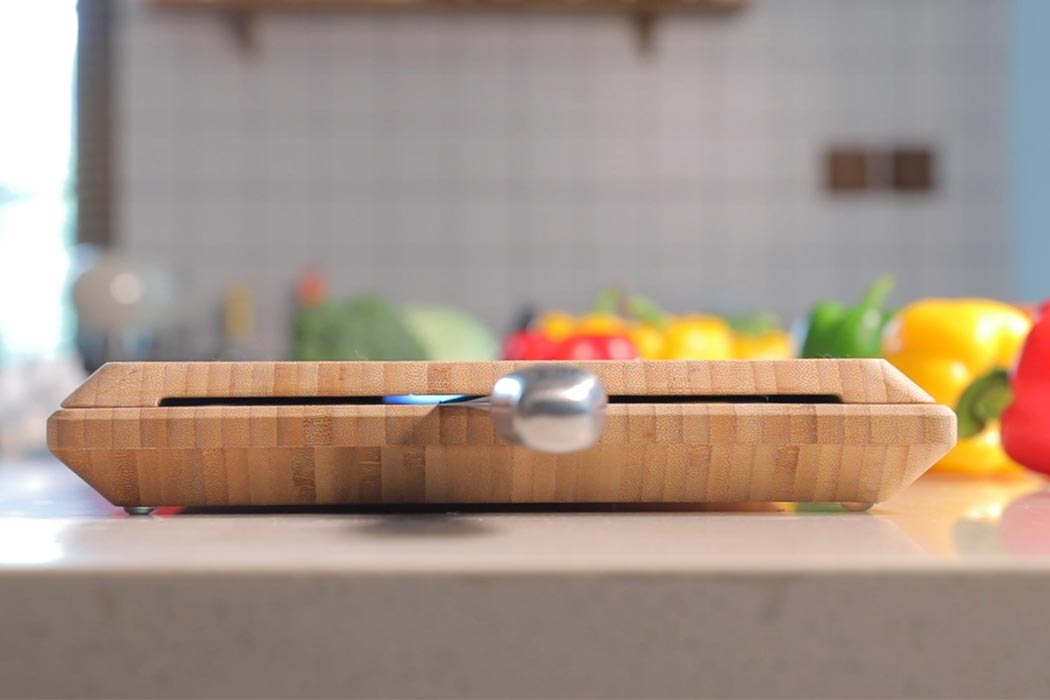 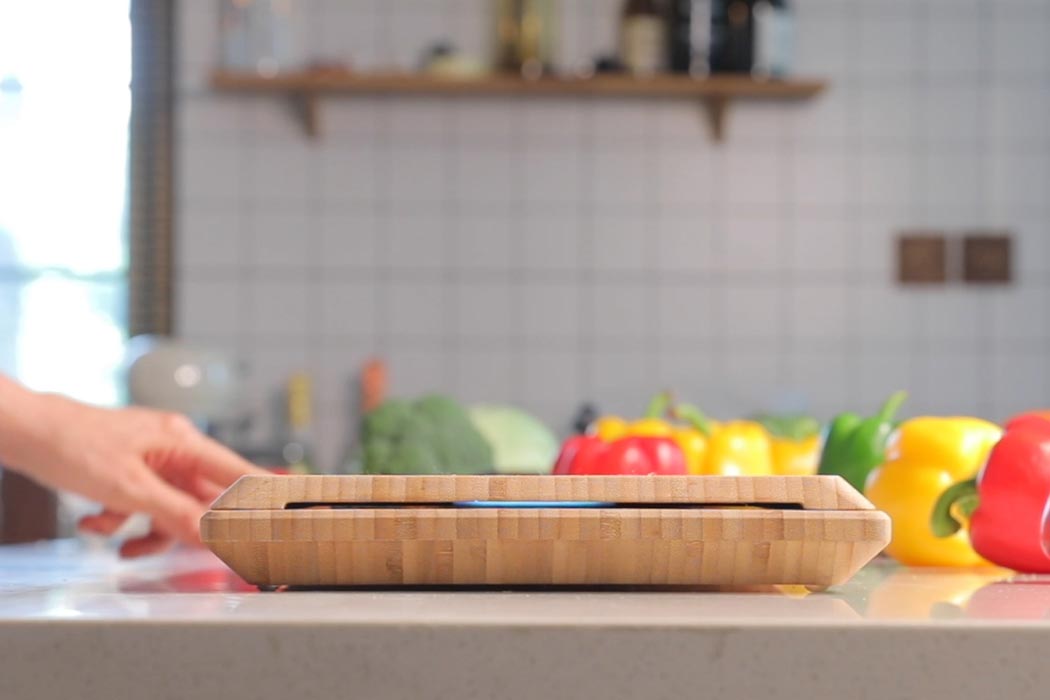 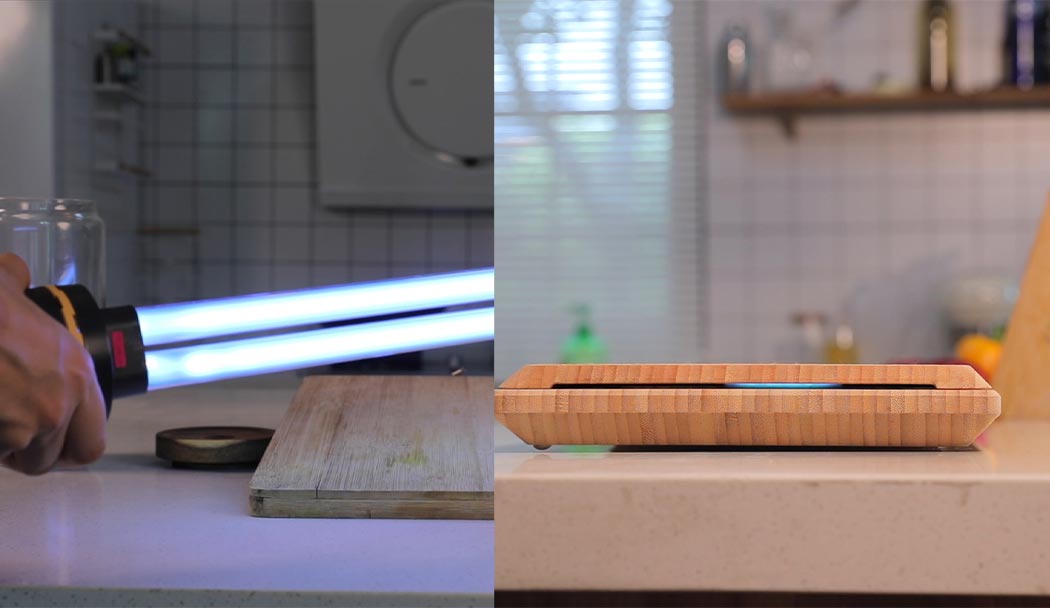 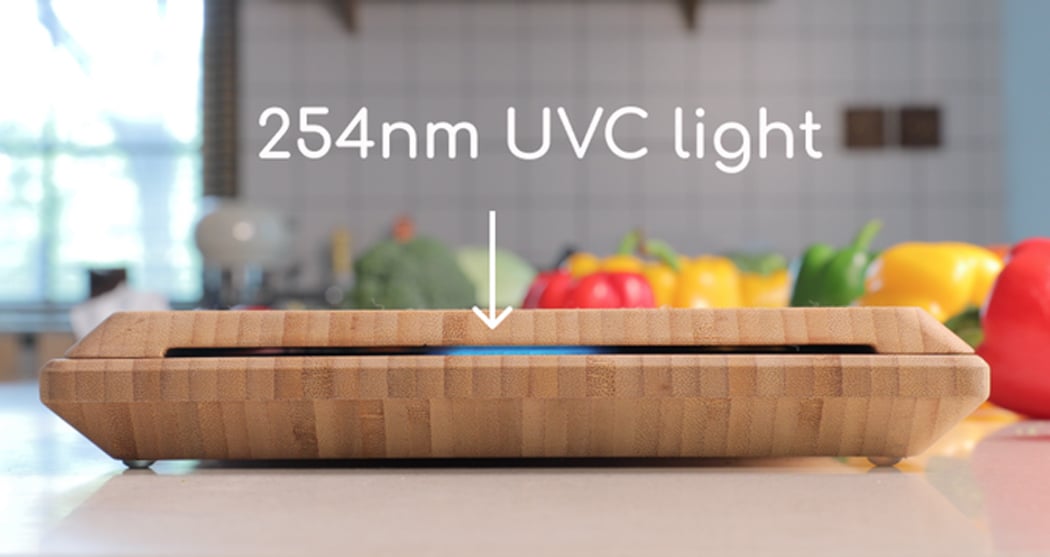 The revolutionary ChopBox makes sanitizing your knives and cutting surfaces easy and brings germ-free cooking to your kitchen with a built-in disinfecting UVC light in the cutting board. Traditional knife blocks and cutting boards with gouges and scrapes can harbor harmful bacteria and germs. But who thinks to sanitize their knife after grabbing it? Now you can place your knife in between the two cutting surfaces and activate the small but powerful 254nm UVC light to sanitize up to 3 knives at once AND both cutting surfaces at the same time! Just one minute of UVC light exposure is guaranteed to kill 99.99% of germs and bacteria.

The 254nm UVC light used in the ChopBox is small and has a limited angle with only a small gap in the boards when in use. It is 100% safe for all humans to be around and near this light. The UVC light will automatically switch off when you separate the two boards or you can press the second button on the control panel to turn it off. You will receive no negative side effects from this UVC light 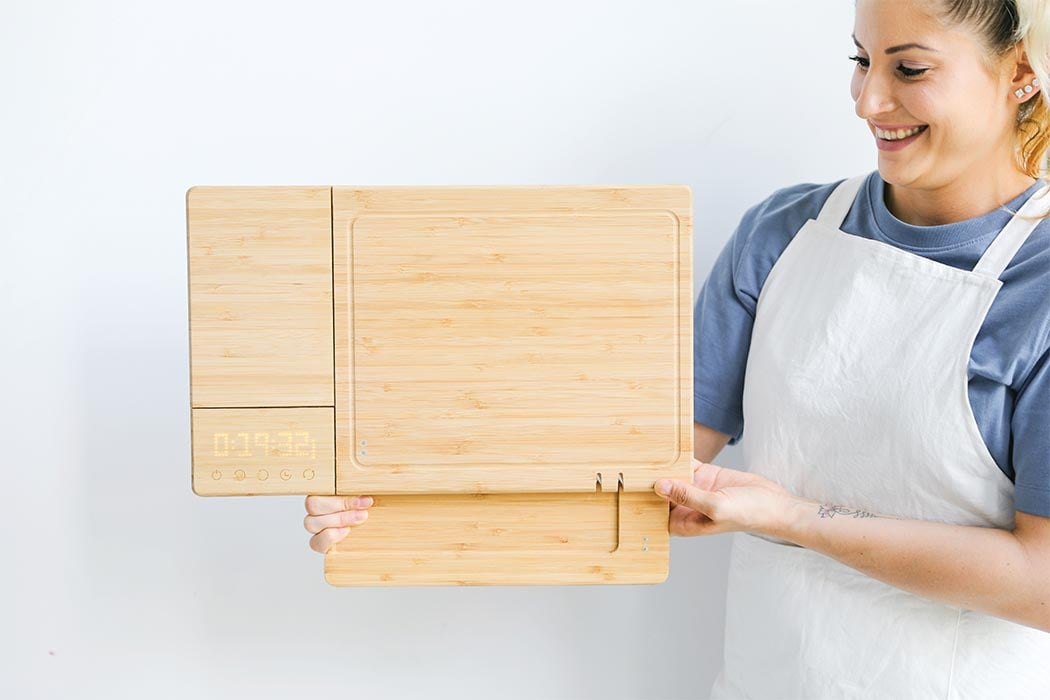 Instead of needing up to five single-use gadgets and tools in your kitchen, the ChopBox combines all five into one amazing cutting board. You’ll never need to find or store smaller single-use tools like a food scale or kitchen timer again and will have more room for storage and organization in your kitchen.

Two Boards in One: Double up your space and avoid cross-contamination. 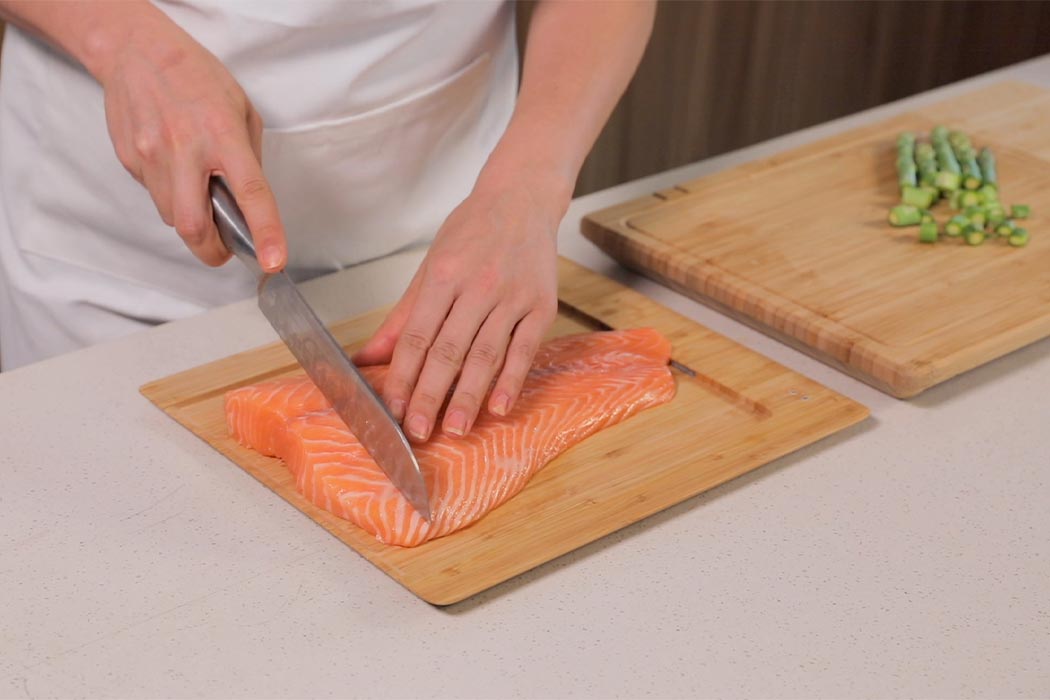 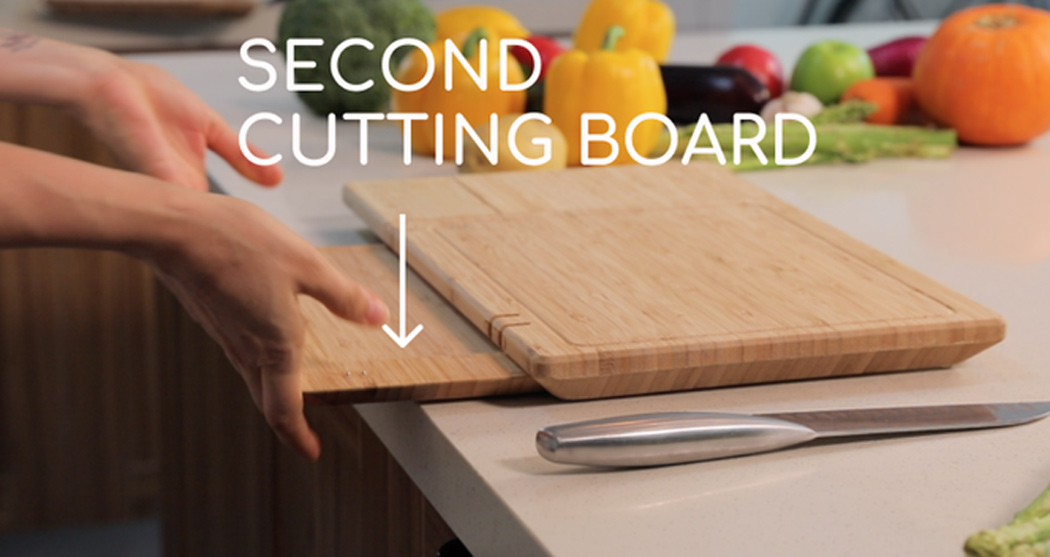 With two cutting surfaces, you can switch between raw meat and seafood to other foods without ever having to worry about cross-contamination. You can also use the smaller cutting board for food scraps, as an area to store cut foods, and for transferring your chopped food to the stove. The main cutting surface is replaceable. Buy parts via Kickstarter, or from Amazon after the campaign. 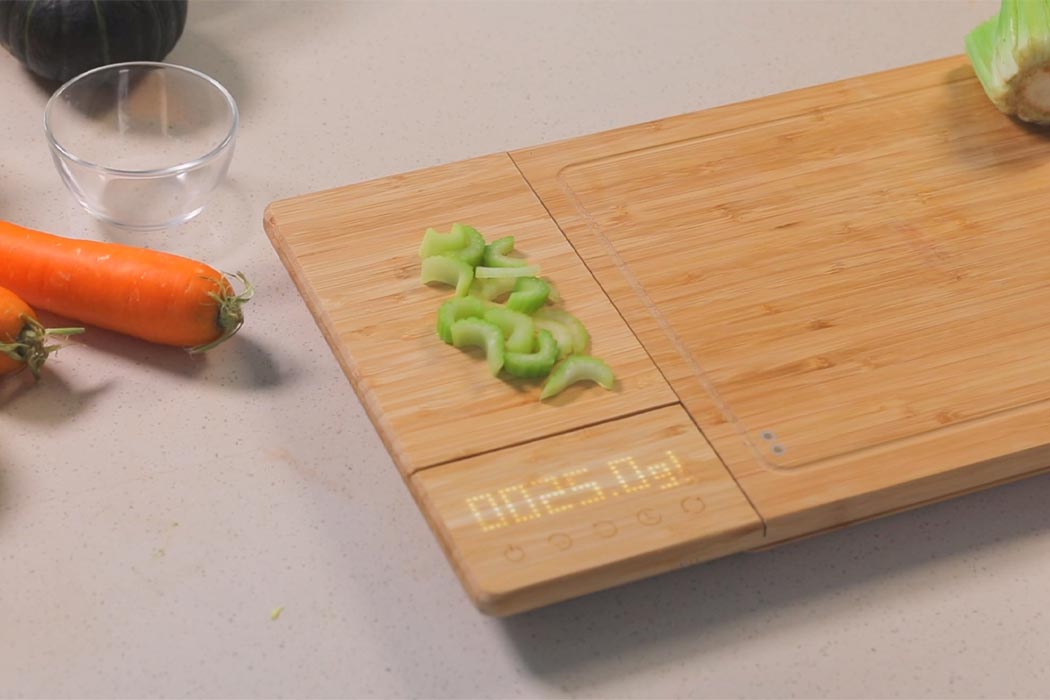 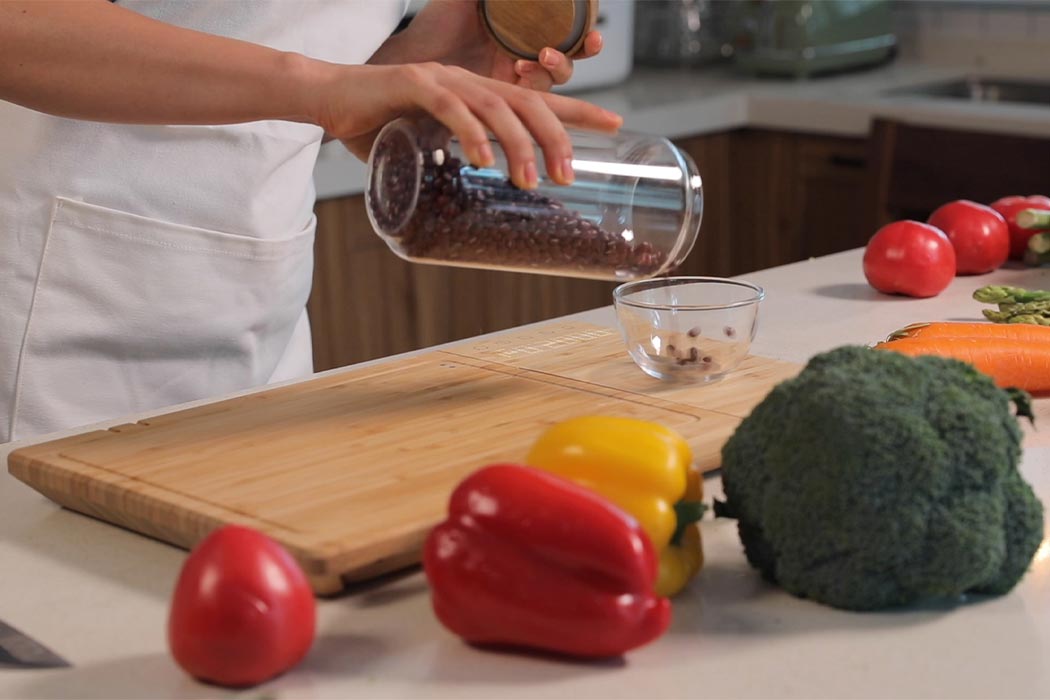 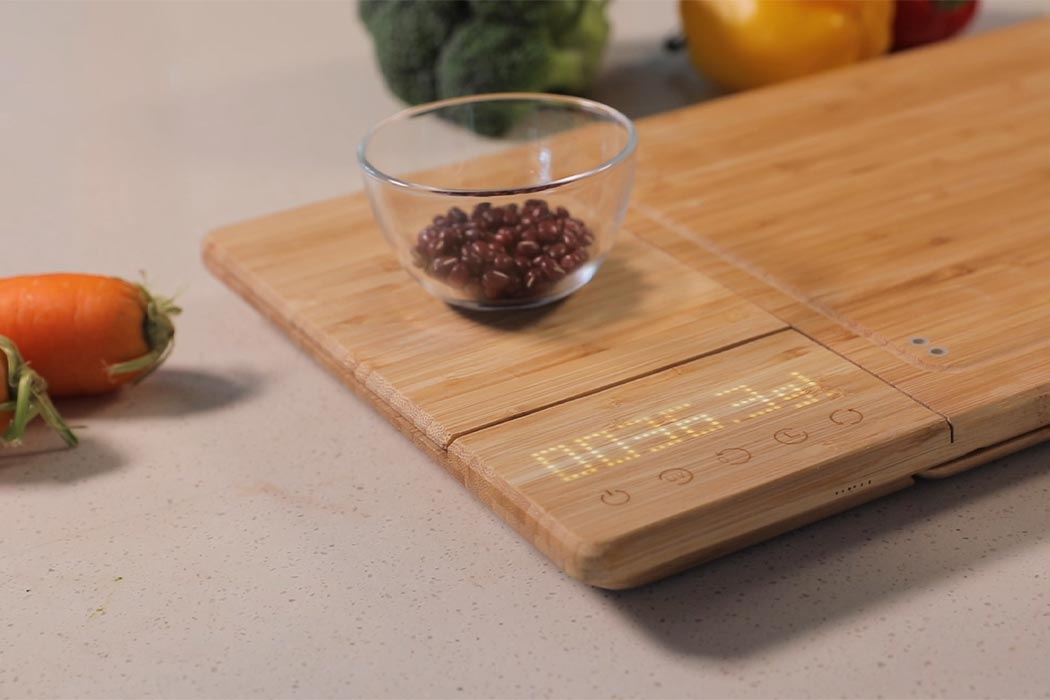 The built-in scale is part of the cutting board on the left-hand side. You can measure your ingredients in grams, ounces, pounds, kilograms and the scale weighs up to 6.6 pounds. Always get the exact right portion! The middle button on the control panel is used to switch between grams, ounces, pounds, kilograms with a single long-press. The scale features a tare function. To zero out the scale for a bowl or other vessel, just place the bowl on the scale and press the third (middle) button on the control panel to zero out the scale so that you’re only weighing the goof, not the container. 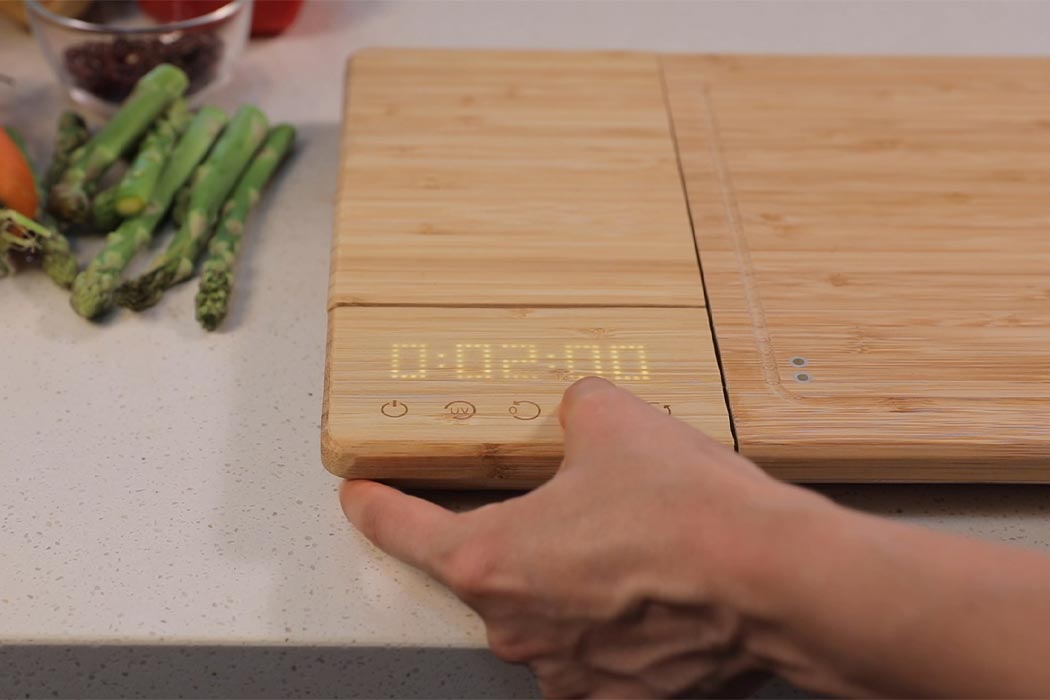 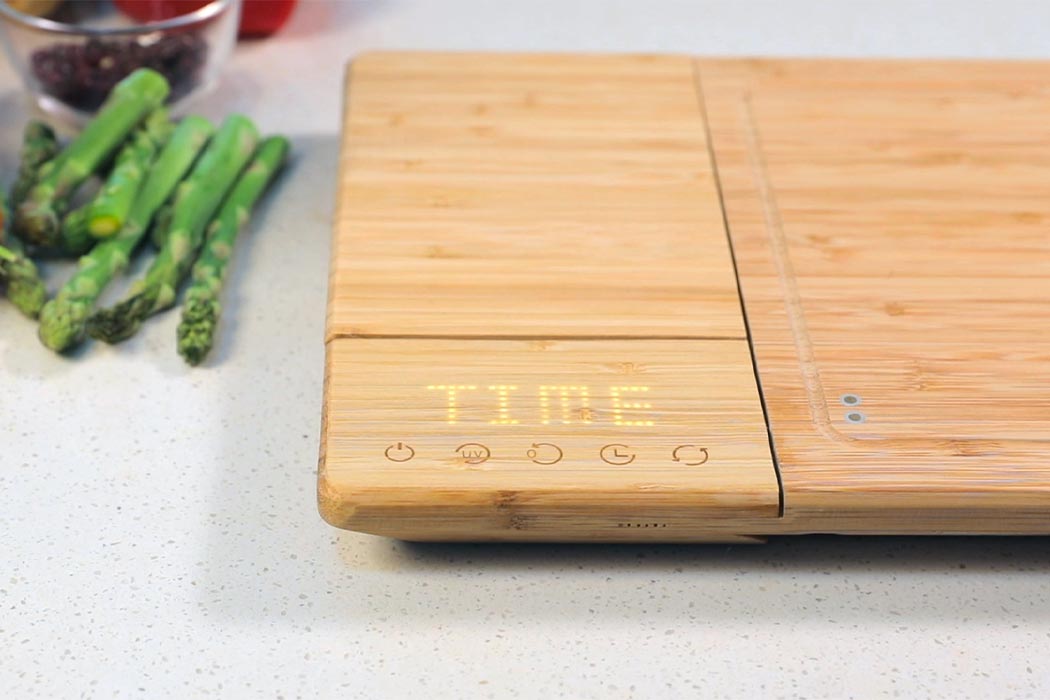 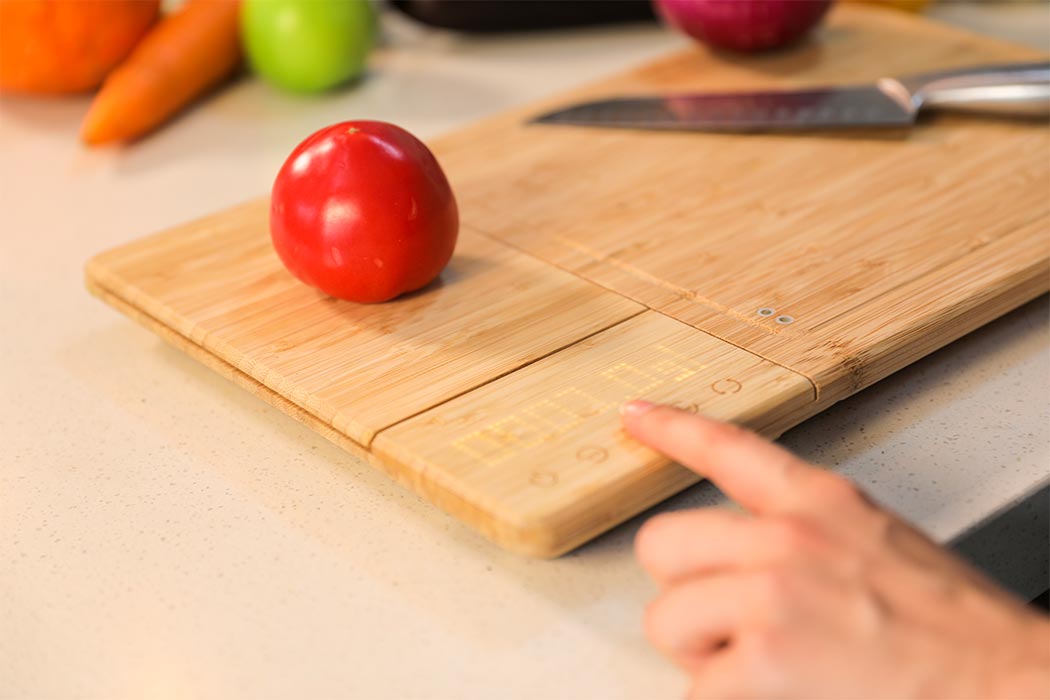 Your food will come out perfectly every time with our 9 -hour digital kitchen timer built-in to the ChopBox. Unlike traditional kitchen timers which can only go up to 59 minutes, the ChopBox timer has a longer readout and can be set for up to 9 hours, 59 minutes and 59 seconds, so even big meals and slow cooker meals can be set on this timer. 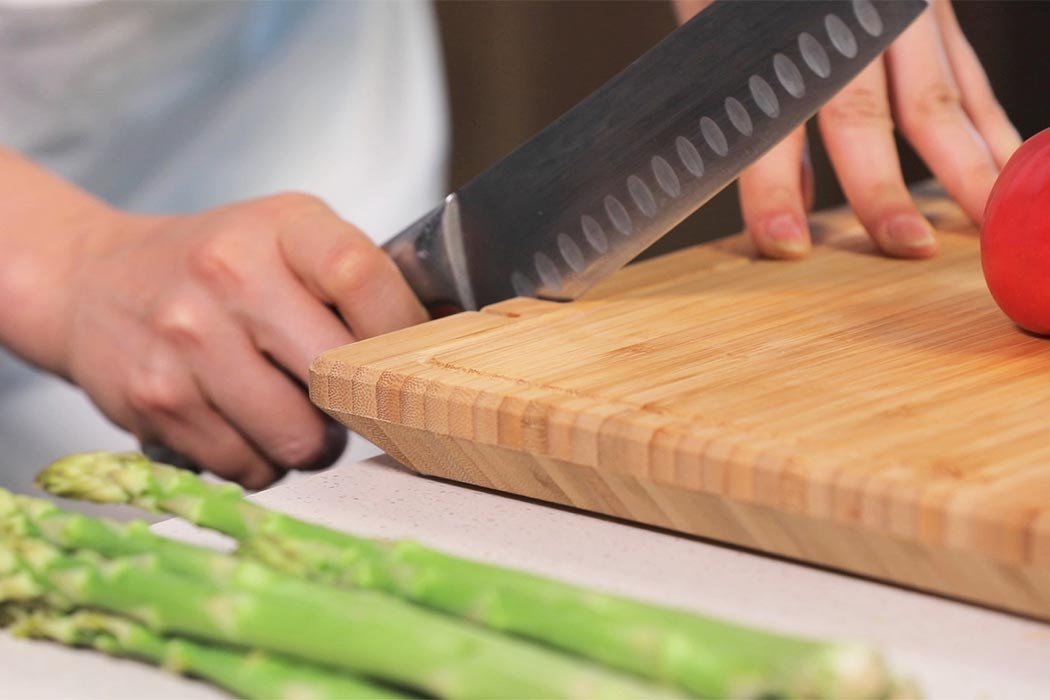 It’s tough to remember where you put that small knife sharpener or know you’re using the honing steel type of sharpener correctly, so we made it easier than ever by putting two knife sharpeners right on the side of the cutting board. They are easily accessible and simple to use. There are two different knife sharpeners built into the ChopBox. One is made from diamond stone, and the other is made of ceramic stone, so you can pick your level of sharpness. The sharpeners are replaceable. Buy parts via Kickstarter or from Amazon after the campaign. 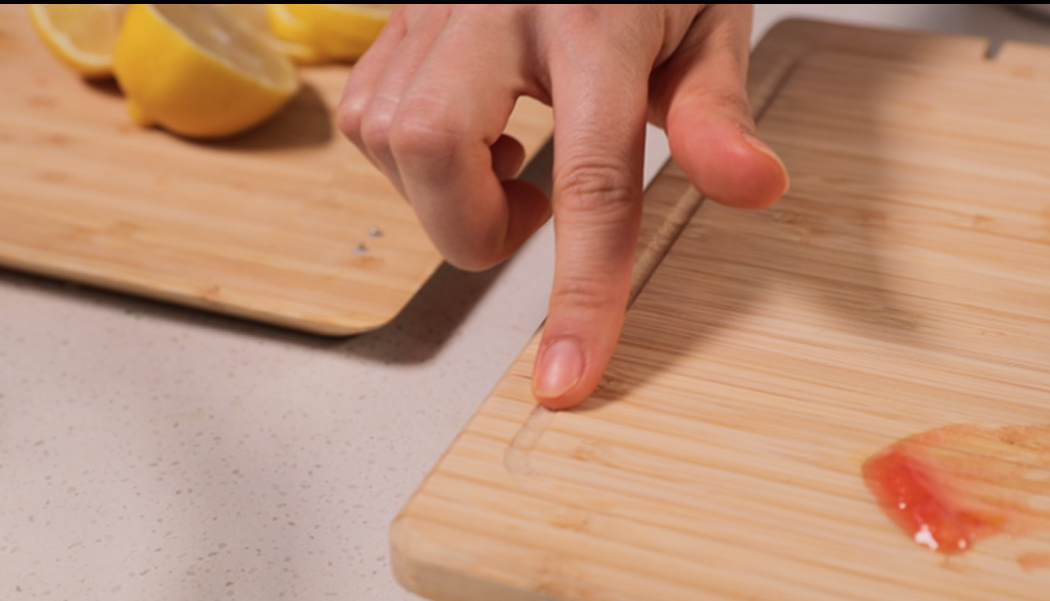 There is a groove surrounding the cutting surface on the larger cutting surface for catching any juices from falling off and onto your counter, clothing, or floor. Just another small feature to make this the best cutting board you’ve ever used.

Use the second board as a presentation plater

In addition to food preparation, this smart cutting board is a perfect food presentation platter for parties and guests! With two clean uniform surfaces, you can use it as two separate food serving surfaces or as the perfect cheese or charcuterie board with the second surface coming out from the bottom to hold cheese knives and catch any drips.

Long-lasting battery life: lasts up to 30 days on a single charge 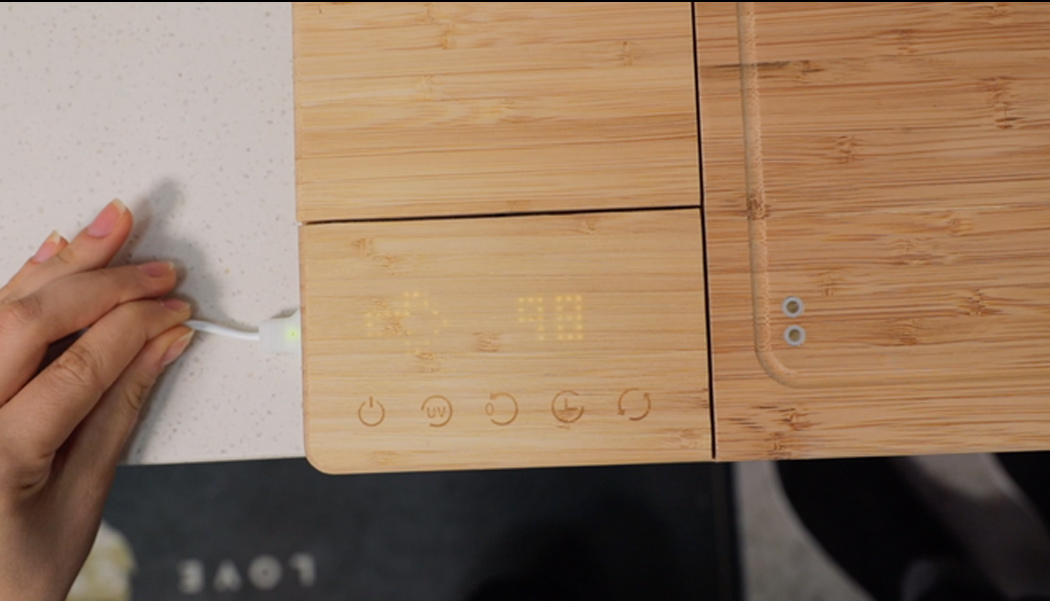 The ChopBox has a large battery inside [3000 mAh] which charges quickly. With just one hour of charging you get up to 30 days of regular daily use of your smart cutting board.

Completely waterproof for an easy clean up 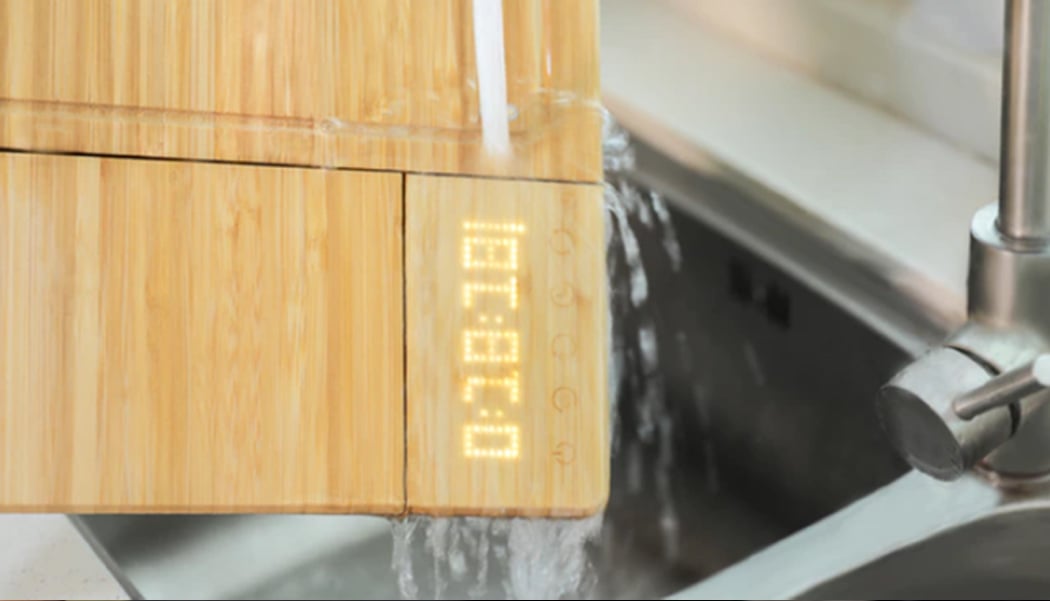 IPX is a waterproof rating system that refers to the ability of an object to resist water. For example, IPX0 means something is not water-resistant at all, such as a book. IPX2 means your object is protected from “some water drops when the device is tilted up to and including 15 degrees.” The rating goes up to IPX8, which means your object is protected even if it is dropped in over 3 feet of water and is fully waterproof.

The ChopBox is rated IPX7, meaning it is fully waterproof and can withstand being in water up to 3 feet deep! However, we do NOT recommend putting the ChopBox in a dishwasher, as the high heat in dishwashers warp and break down all natural cutting boards over time 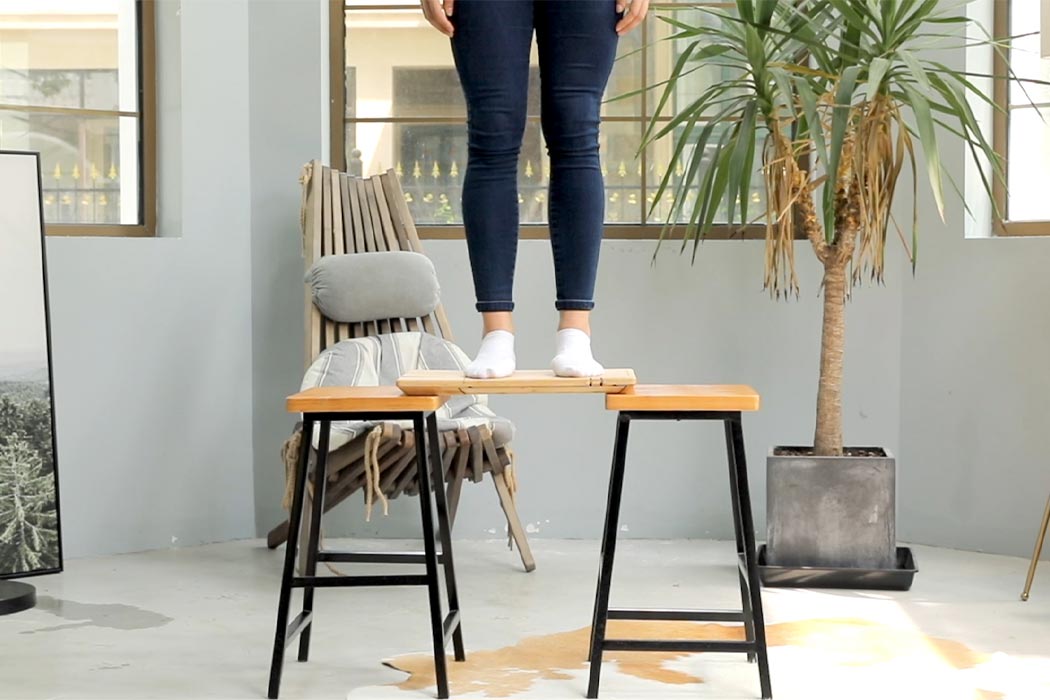 ChopBox is​ incredibly strong​!​ It holds up to 150 pounds of weight. Bamboo is completely natural and organic and is considered a “low maintenance wood,” meaning it is very hard and dense, so it keeps water out of the wood itself so it will not warp or crack as other woods can. Other woods like maple, walnut, or cherry require regular maintenance with mineral oil or beeswax to keep it from cracking and warping. Bamboo is also resistant to knife scarring, due to its hard density and is known for its durability and affordability. 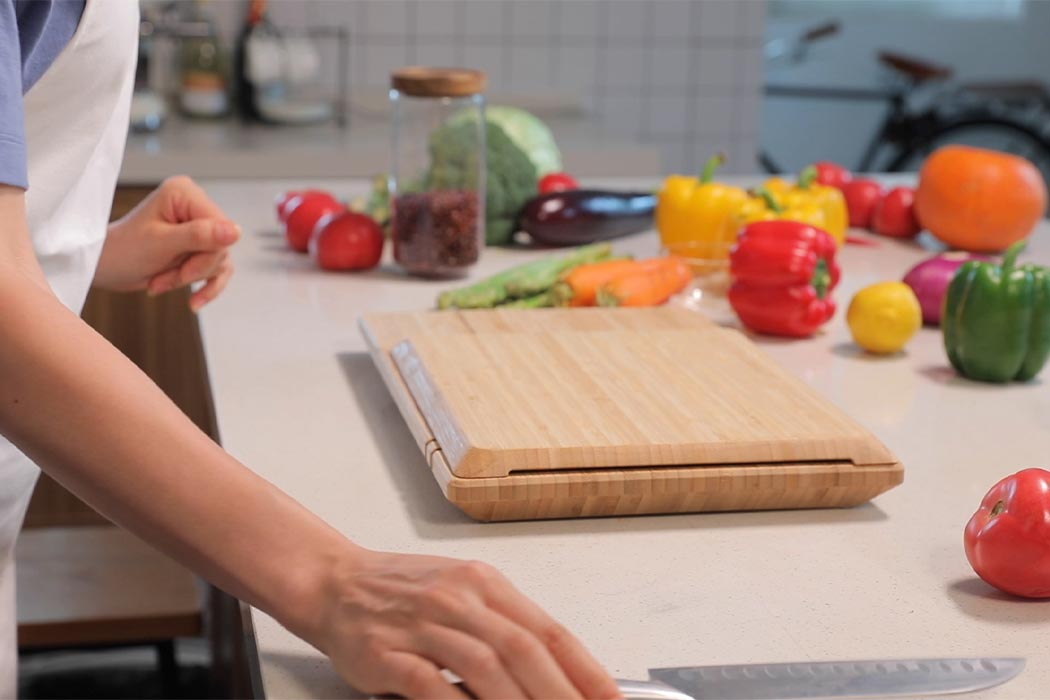 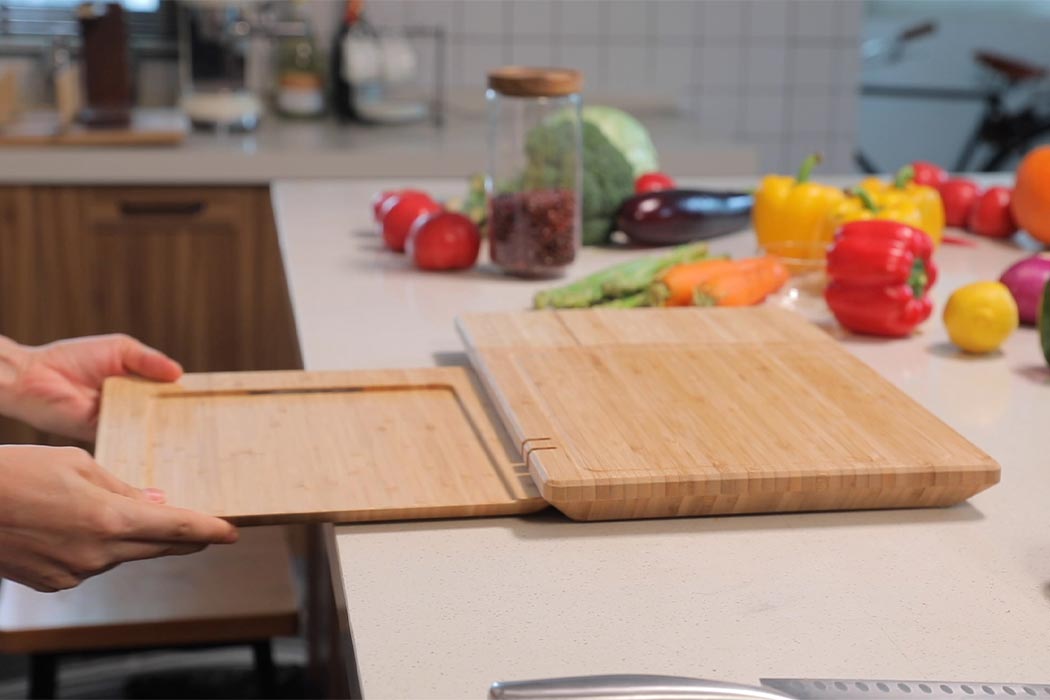 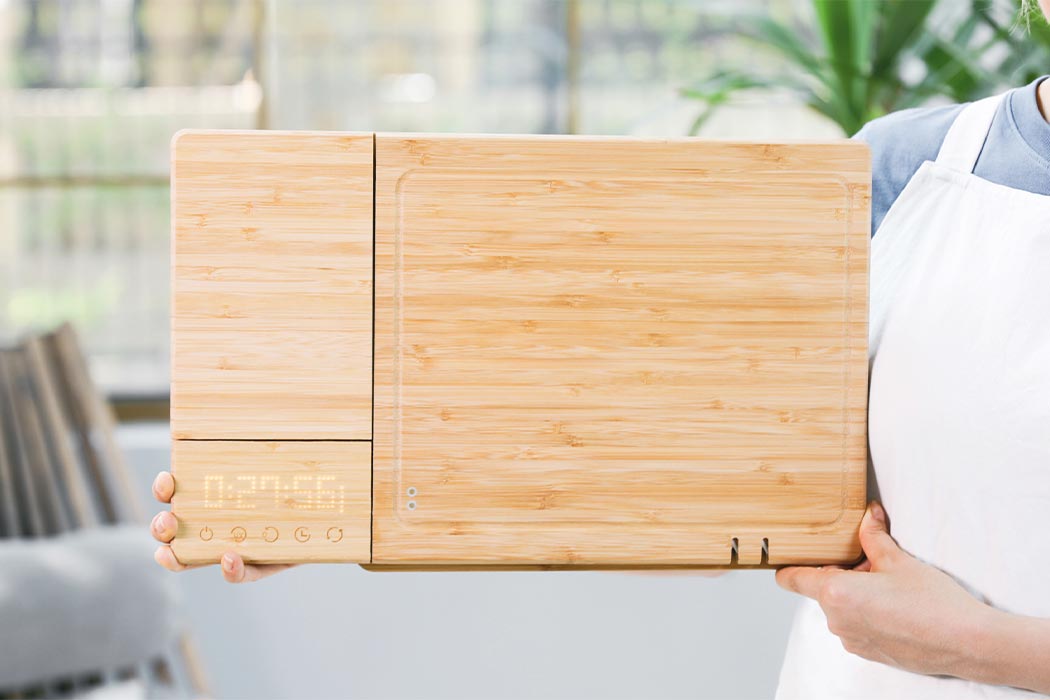 Visual Category Coding. It dictates that a product should look a certain way, depending on which product family it comes from. For example, look at…

UNStudio is at it again with this ambitious vertical city concept designed for Singapore’s cultural hub. Scotts Tower attempts to redefine the way architects approach…

Art nouveau meets contemporary production with a new set of chairs and stools by modern designer Michael Stolworthy.  Elegant and organic, formidable and whimsical, they…