It’s strange that bicycles have been around for centuries but they still don’t have the basic attachments like rearview mirrors or indicators. You’d imagine that bicycles would probably be the first to have basic features like a taillight or indicator, right? Even e-bikes for that matter, which are literally designed to operate silently. It’s strange, especially given that cars, buses, motorbikes, and most other vehicles logically travel faster than cycles, e-bikes, and e-scooters… and just by virtue of that fact, it’s just common sense for cyclists/e-scooterists to be able to alert vehicles behind them of their presence, and of their intentions.

The BLINXI provides a simple, sophisticated, and universally applicable solution to the aforementioned problem in the form of a slick, banana-shaped piece of plastic that sticks to the back of any helmet via magnets. Fitted with bright LEDs on the inside, the BLINXI works as a head-worn tail-light and indicator, allowing you to be more visible to drivers/riders behind you. A single on/off button on the BLINXI allows you to toggle the taillight while even letting you cycle through the product’s three modes (flashing, steady, and daytime). The indicators are powered by a wireless controller that straps right to your handlebars, giving you the experience you’d have with motorbikes and their accessible indicator controllers. Fitted with incredibly powerful LED lights with visibility as high a 100 meters, the BLINXI works both at night and in day to help you, the wearer, be visible (and predictable) as you drive down roads and make turns along your route. BLINXI’s internal battery gives it up to 24+ hours of use on a single charge while in daylight mode (or conversely 10 hours in flashing mode), and a MicroUSB port allows you to charge the accessory with any standard charger or power-bank.

What sets the BLINXI apart are a few subtle details that just make it a better product. An audio beeper built into the device helps you know when the indicator’s running (quite similar to the ones found in cars and motorbikes), and flashing LEDs within the remote controller provides an extra visual cue as a reminder too. The BLINXI comes with a relatively sleek design that seamlessly integrates onto any helmet without protruding out too much so as to prevent any accidental neck-twists if you were to land helmet-first in the event of a fall. Its magnetic mount is designed to withstand any sudden jerks and jitters too, making sure the BLINXI never falls off, even on the roughest of terrain, or if you’re performing stunts on your ride. Another incredibly sensible detail is its deliberate lack of a smartphone app to help control the lights. By keeping things simple, the BLINXI does exactly what it needs to do, and does it well (also proving that you don’t need an app for everything). Designed to universally fit on any helmet you own (even most foldable ones), the BLINXI plugs that massive safety gap between bicycles/e-bikes and motorcycles, by actually allowing drivers and riders behind you to notice you and be completely aware of your driving patterns/intentions. By cleverly integrating itself within the helmet (and not the bicycle), BLINXI can easily be used on e-bikes and cycles, as well as on scooters, hoverboard, skateboards, and roller-skates too… because the need to be safe and visible, I’m sure you’ll agree, is a pretty universal one. 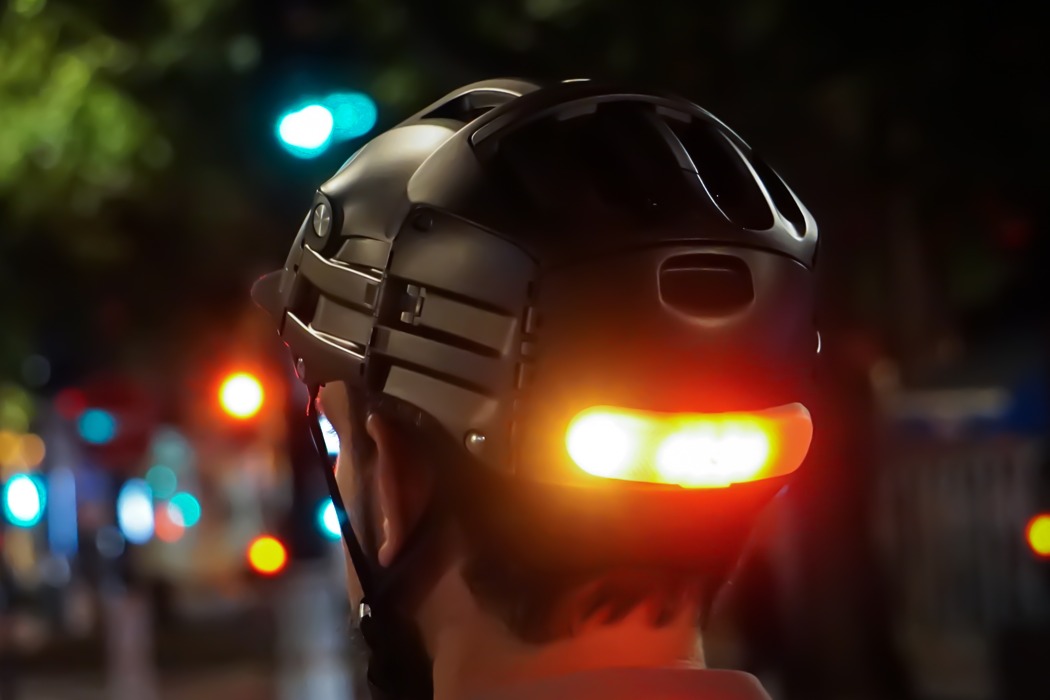 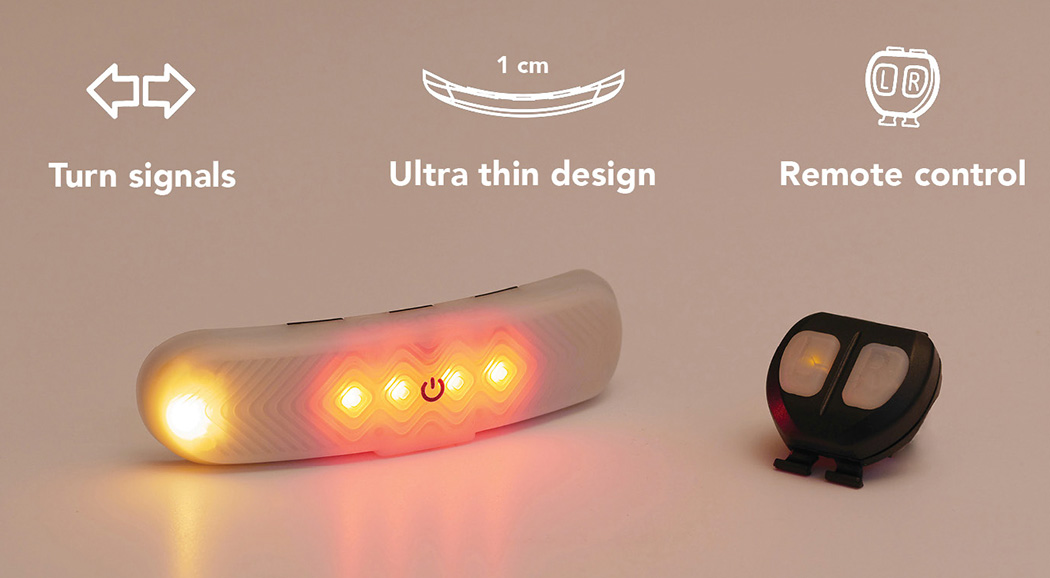 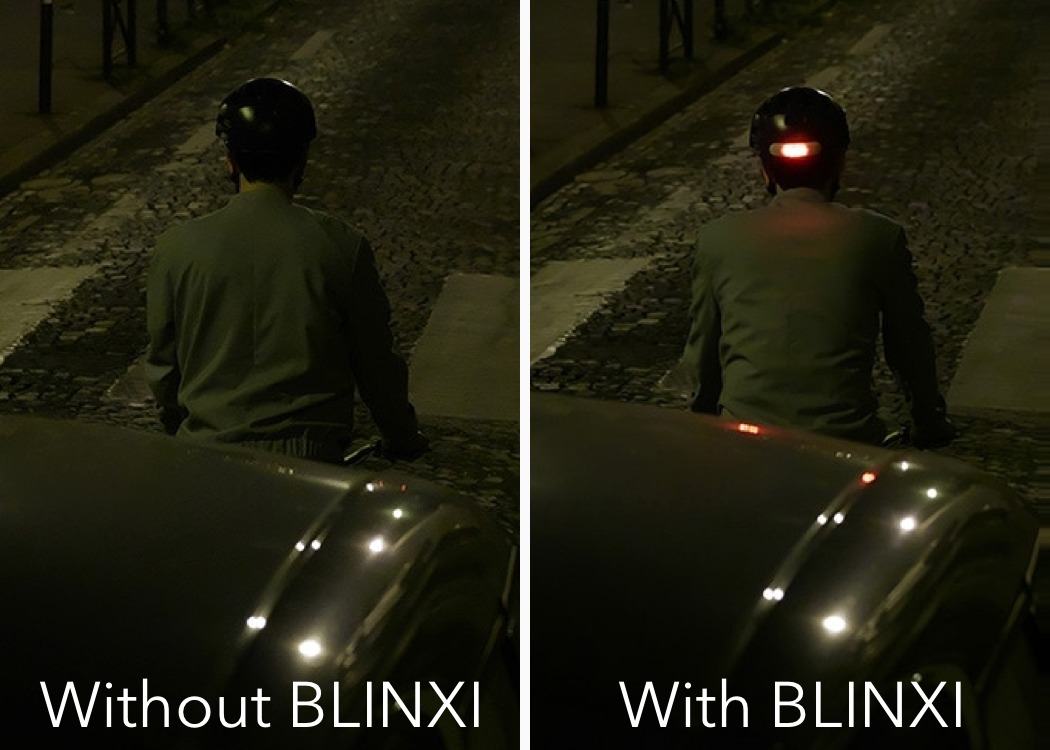 The issue with bike lights is that they are located too low (under the saddle) to offer good visibility. It’s even worse for E-scooter lights! With the BLINXI helmet light being located very high, you’ll be much more visible from car drivers.

Another issue is how to safely indicate your direction. Raising an arm is clearly hazardous, especially when riding E-scooters. With BLINXI, you’ll just have to press the remote control. 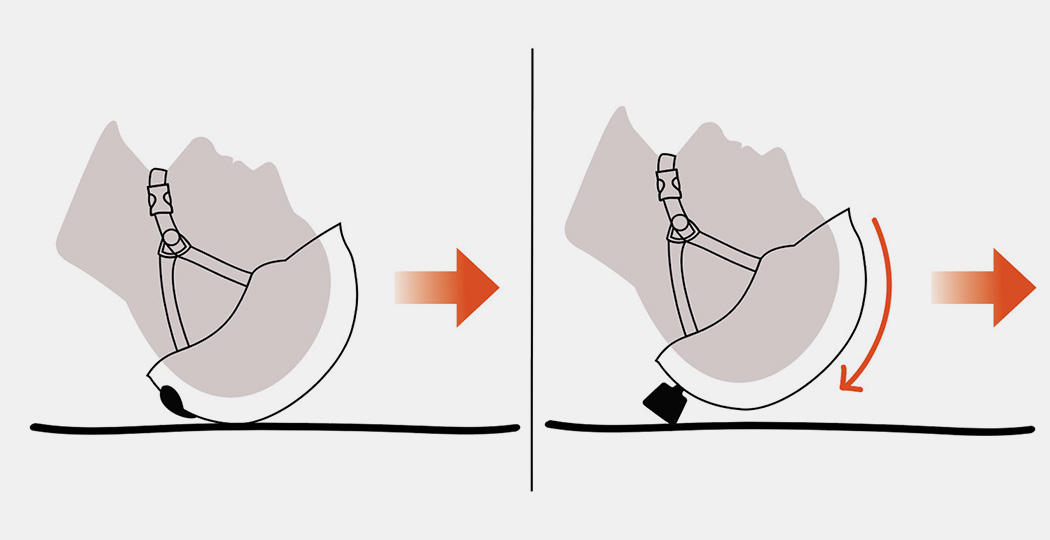 As helmet manufacturers, the team knows that any add-ons on helmets can potentially create dangerous neck twists in case of accident. This is why they have designed an ultra-thin helmet light to improve safety. BLINXI is less than 1cm thick. 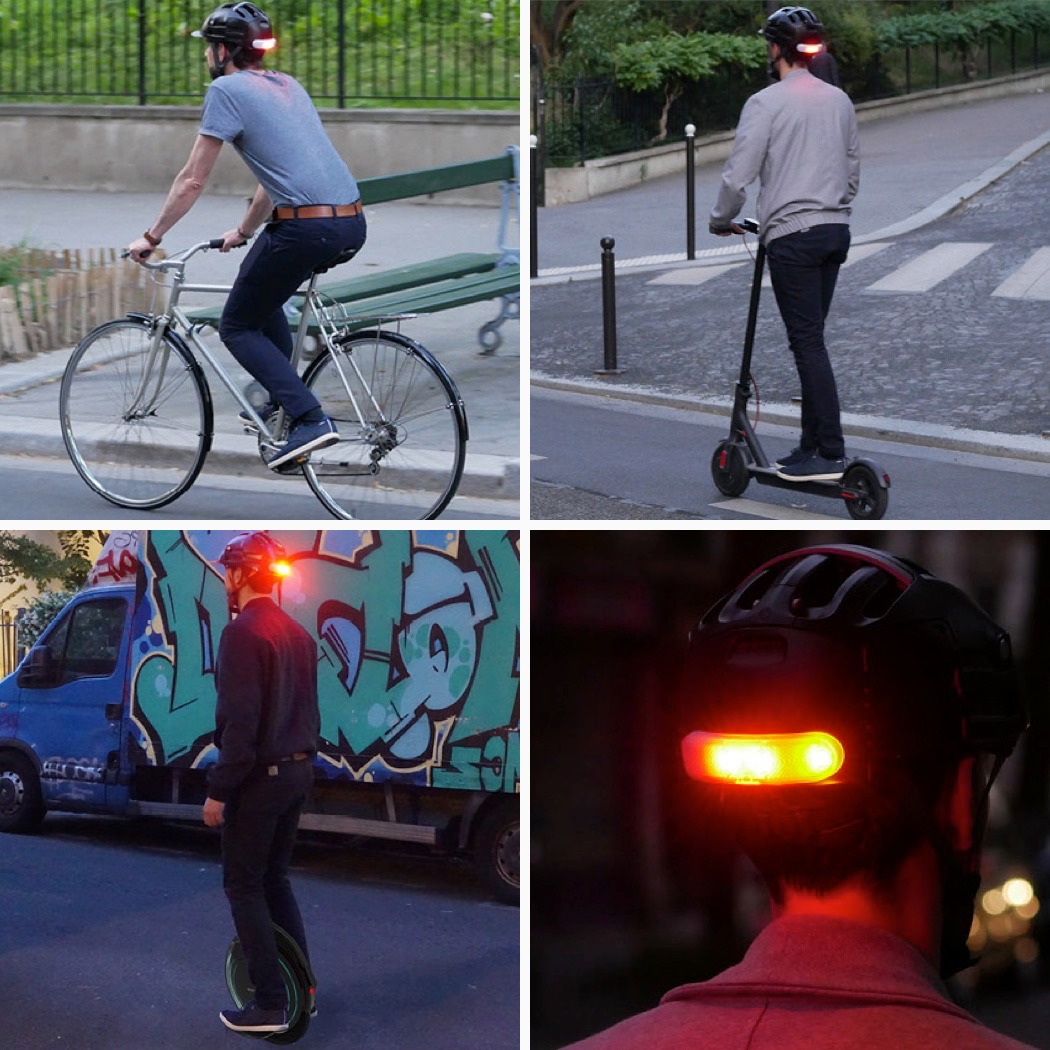 BLINXI is made for all commuters. Cyclists, E-scooter users, one-wheel riders, skateboarders etc. It fits most of urban helmet, including the foldable helmet Plixi.

How to Use the BLINXI

1. Fix the device on the helmet mount.

3. Use the remote control to activate turn signals.

Audio Reminder – To help you know that a turn signal is currently flashing, an audio reminder is included, which beeps at the same time. 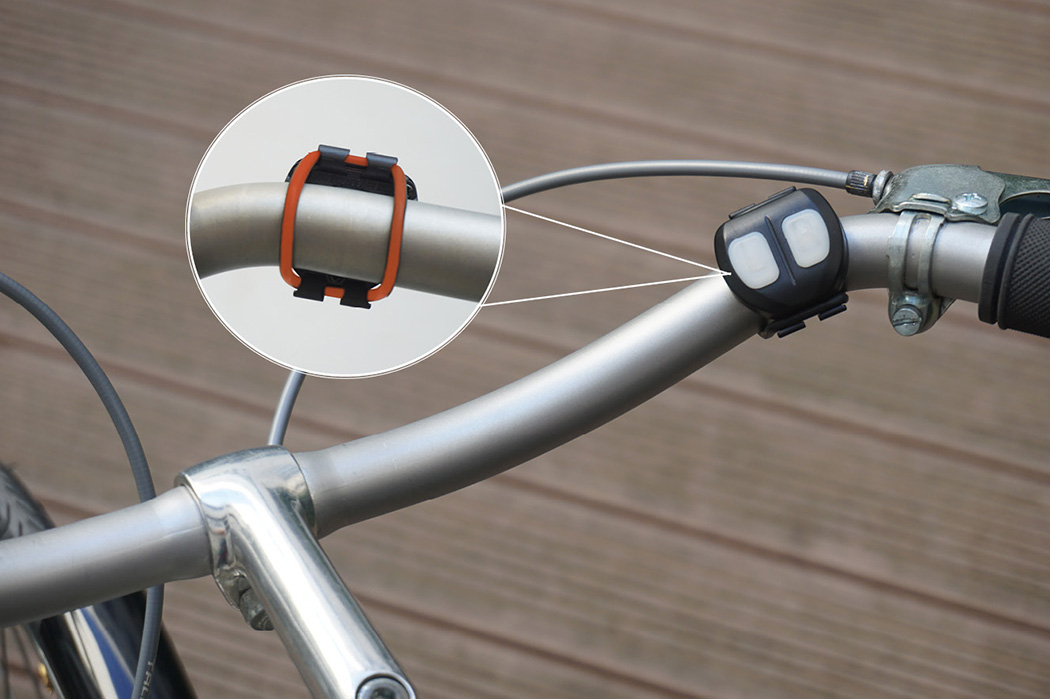 Fits Any Handlebar – By using 1 or 2 elastic straps, the remote control can be attached to any handlebar in many positions. 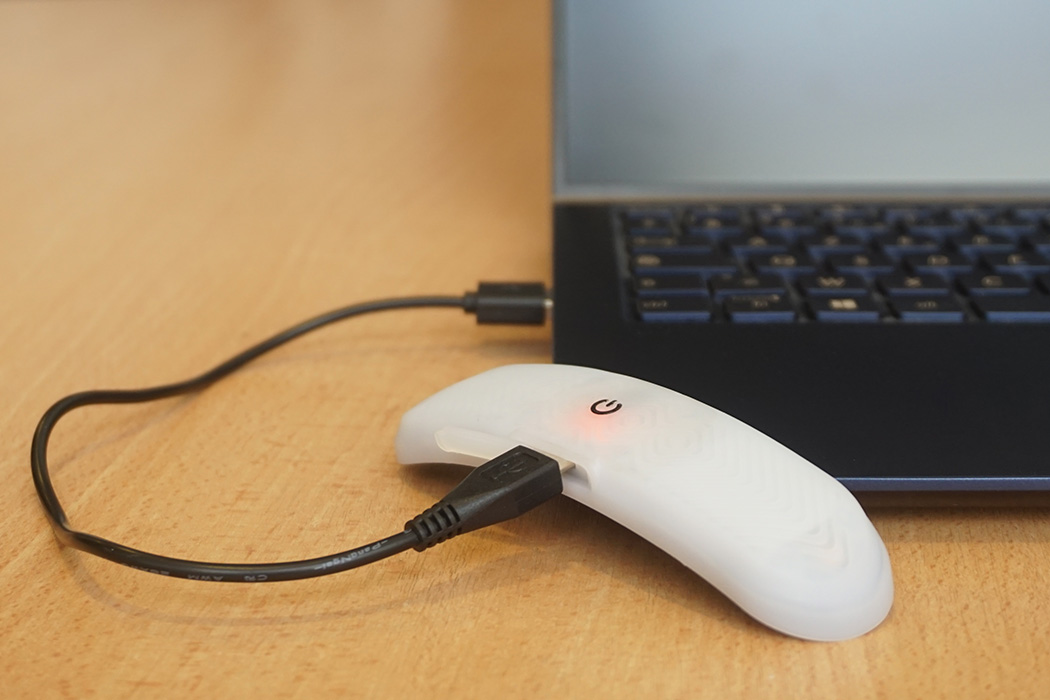 USB Rechargeable – BLINXI has a run-time of 10-hours in the Flashing mode. When the battery is drained and has to be recharged, a red light comes on near the ON/OFF button. When charging, this red light keeps flashing and then turns green when fully charged.

Easily Removable – The magnetic fastening of the device allows you to easily remove it from a helmet, especially when it needs to be recharged.

Patent Design of the mount prevents unexpected dropout thanks to the combination of a magnetic fastening with a mechanical attachment. 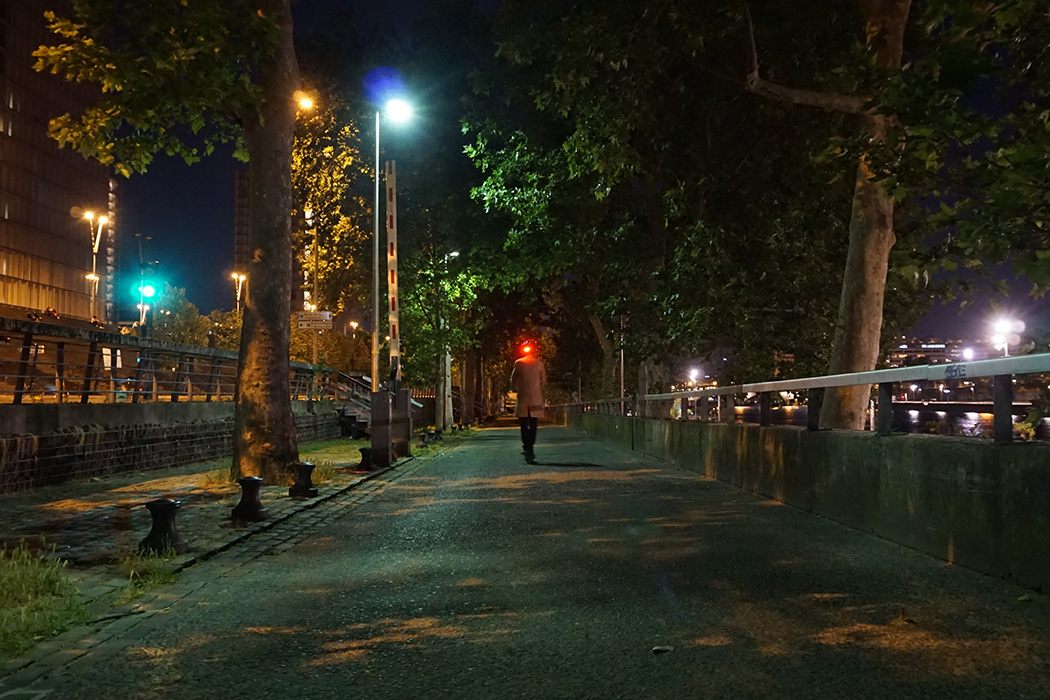 Highly Visible – Including 4 red ultra-bright LEDs, BLINXI is highly visible, up to 100m! 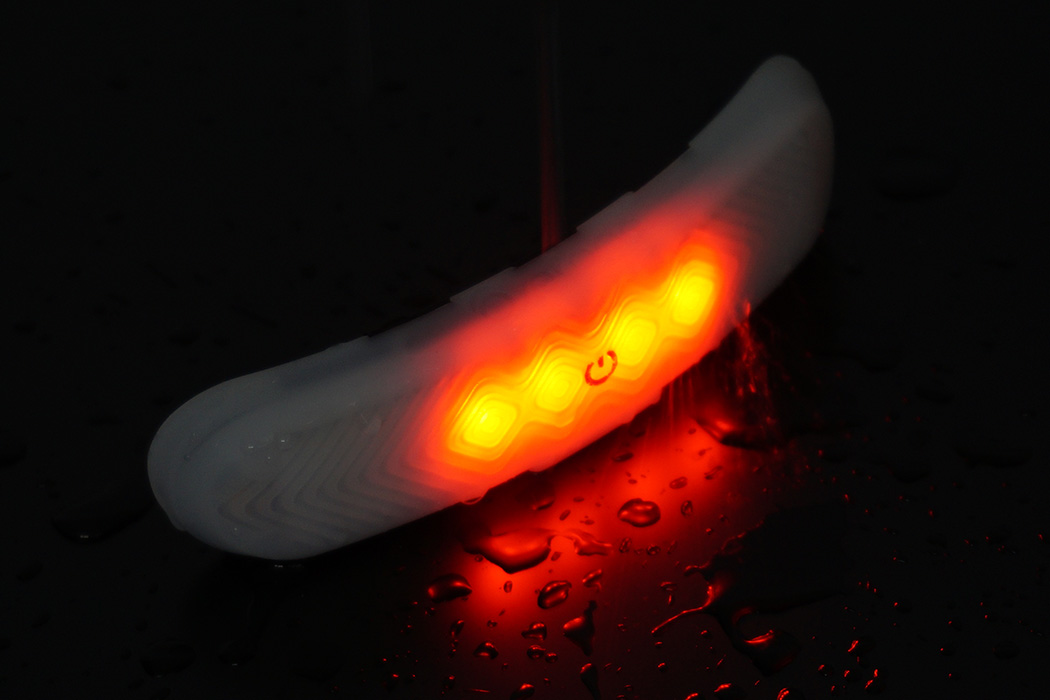 What if the Osulloc brand, known for their green tea treats, made a juicer? This concept by PDF HAUS explores that very question. As simple…

Shift is a remarkable wheelchair cushion designed to heal and prevent pressure sores without interrupting users’ daily lives. Adaptable to any user’s body, the system…

That’s Not A Pretty Picture On The Wall

That’s an air cleaner, thank you very much! For those who thought that air cleaners need to be these drab objects in the room, take…