The orb drop ii is the philosophical child of a Hot Wheels toy set and a Pinball arcade game. Designed to be something that kids can build themselves, the orb drop ii involves an intricate looped 3D track and multiple chrome orbs that follow the routine of running up and down them in a singular file.

There’s something enriching and therapeutic about the orb drop ii. The entire kit comes pre-fabricated with laser-cut MDF sheets and plastic rails that can be put together right out of the box. Running on a motor, the orb drop ii creates a looped rollercoaster racetrack for its 6 ball-bearings. A stepper motor and a 9-cam mechanism lifts the ball bearings to the very top of the track once they reach the bottom, creating a physical representation of a ‘soothing GIF’, while a clever track-stepper allows the ball-bearings to alternate between the two racetracks that come with the orb drop ii’s build.

Overall, the toy measures a little over a cubic foot, making it a wonderful addition either to a kid’s playspace, or even a workplace desktop. Engaging, meditative, and anxiety-busting, watching the ball-bearings follow the same path over and over again in a loop is almost as calming as repetitive breathing exercises. For kids, it’s as fun as watching cars zoom down self-made racetracks. It engages a child’s curiosity, and moreover, develops an appreciation for physics and mechanical automata at an early age, exposing them to many unique areas like Hands-On Construction, Tools, Mechanical Fasteners, Materials (wood, plastic, metal), Dynamics, Kinetic Energy, Gearing, Electricity, Cam Motion, Gravity, and much more! 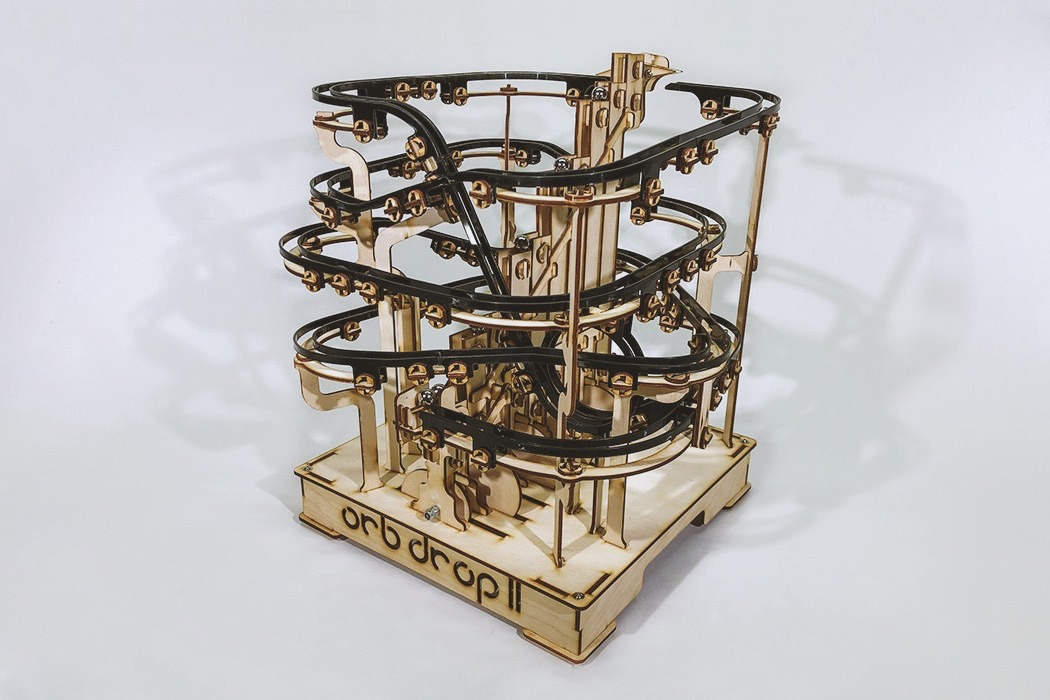 Orb Drop II | A Marble Run Track that you Build Yourself

The Orb Drop II is a DIY mechanical toy kit with a unique composite design that creates a rewarding hands-on experience and promotes STEM-related thinking. 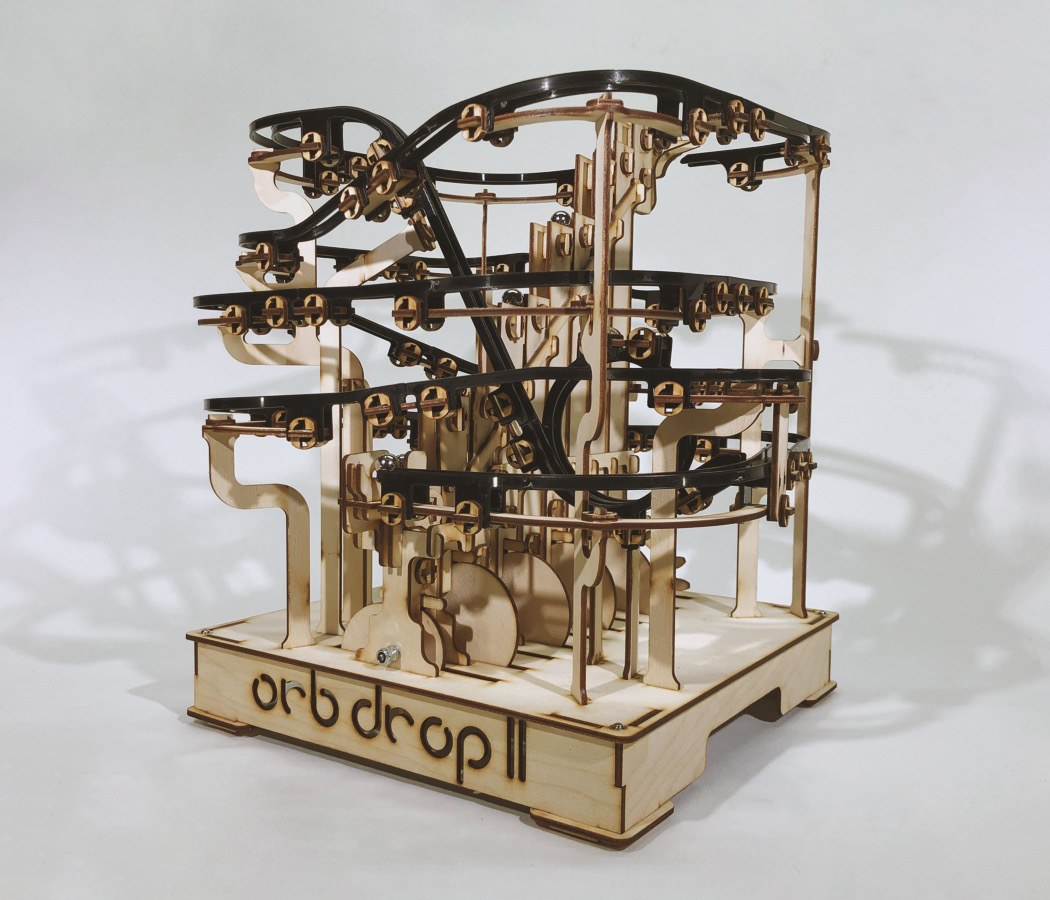 Orb Drop II features a center stair-stepper lift mechanism driven by a series of 9 cams. These cams are located on a single shaft which is propelled by a gear connected to an electric motor. An alternating switch is positioned at the top of the track in order to supply orbs to two separate drops. The first drop is the shorter of the two and has a 60 degree drop into a loop de loop (3” loop compared to 2” loop on original Orb Drop). The second drop is longer and contains a sequence of small drops and inclines whiling banking around 13 curves. The orbs from both drops finish at the bottom of the stair-stepper to make their way back up to the top. 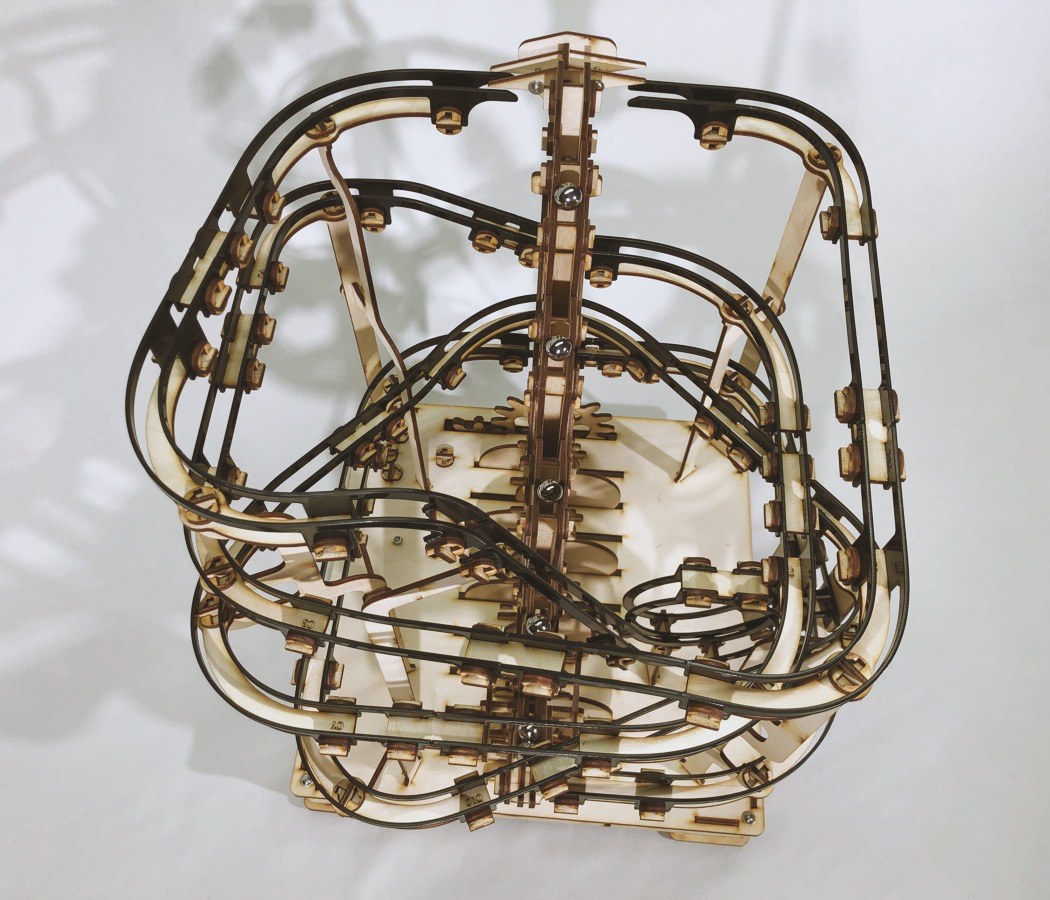 The overall design of the Orb Drop II is similar to the original but also has several improvements. Orb Drop II does not use any guard rails as the track width has been increased to better contain the orb as it reaches higher speeds. Another noticeable improvement is how we utilize the rail supports more efficiently and simplified their attachment method. This reduces complexity and helps make assembly more user friendly. 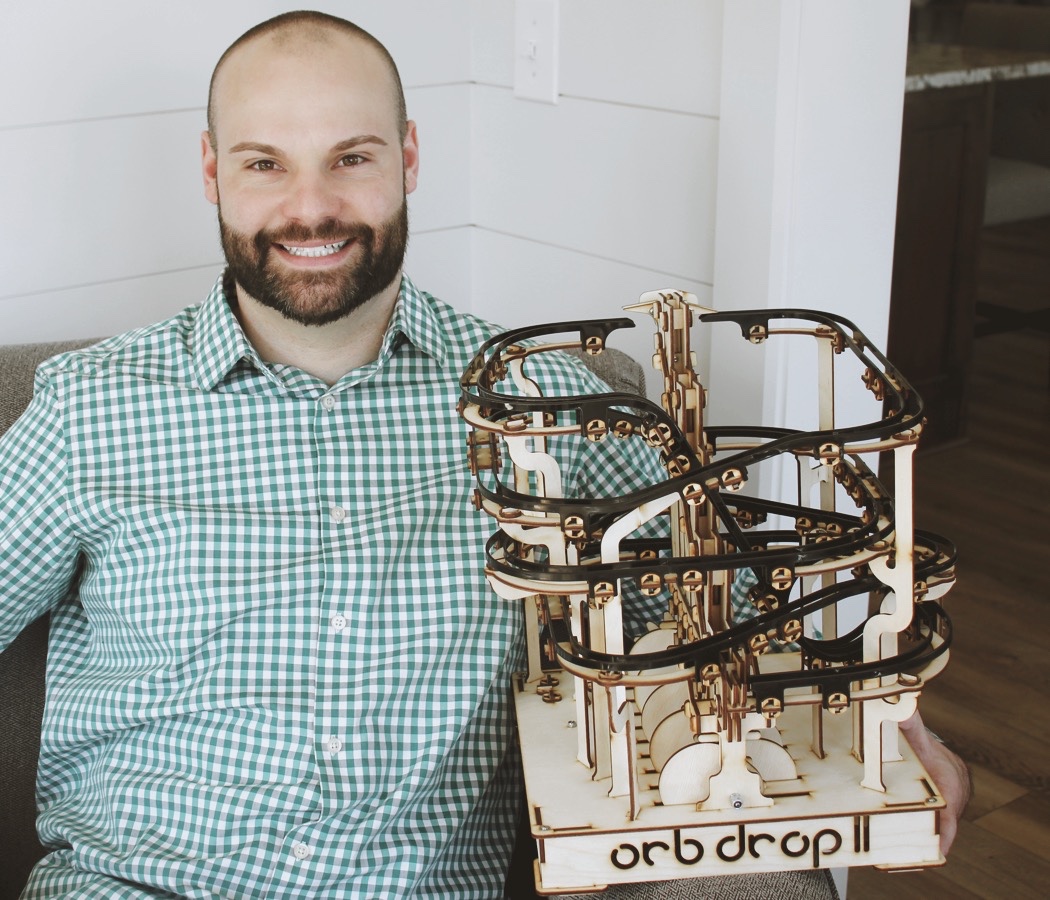 There seems to be an extreme fascination for hourglass timers, especially of the digital kind. The Dynamic Counterdown Timer is one of them; it’s meant…

Population increases, lifestyles evolve, consumption increases… But what do we do with all the leftover waste? One downfall of city-living is the inability to effectively…

What’s Hidden in These Handlebars?

Coincidentally, I just finished a nighttime bike ride and totally needed my lights… only, they were stolen. It happens! If only my lights were built…