You’d be surprised what water and salt could do if combined in the correct way. Say hello to the Egret EO Blaster, an all-purpose cleaning spray that relies on the power of electrolyzed water to replace practically every other cleaning agent you use. When electrolyzed, the water and salt turn into a solution of hypochlorous acid and sodium hydroxide, which acts as a remarkable detergent and disinfectant, instantly killing bacteria, cleansing off harmful chemicals from food, purifying the air, as well as busting odors. The technology, which has existed for over 4 decades, creates an all-purpose cleaning solution that replaces the need for carpet-cleaners, floor-cleaners, room-fresheners, car-fresheners, fruit and vegetable purifiers, and general disinfectants. Needless to say, the electrolyzed water is food-safe, child-safe, and eliminates the need to clean your house with chemicals that aren’t healthy… and the Egret EO Blaster, a small, portable spraying device, can electrolyze and spray the water directly from within its hand-held, wireless form factor.

The Egret EO Blaster, according to Egret Labs, was created to combat three areas. Firstly, the use of toxic cleaners and disinfectants at home; Secondly, the sheer number of plastic bottles bought, used and thrown every year; and Thirdly, the amount of money wasted on different brands, solvents, and apparatuses to keep your house clean. In its patented design, the Egret EO Blaster lets you mix water and salt in, as the machine internally electrolyzes it into EO, allowing you to spray the electrolyzed solution or EO onto everything from cars to carpets, curtains, fruits, baby toys, pet toys, floors, in the air, or anywhere where germs like bacteria, viruses, molds, and odor-particles find themselves. Spray it anywhere and the electrolyzed water can instantly kill 99.95% of all harmful bacteria and viruses, while also breaking apart odor molecules to clean and purify products, food, and spaces.

The use of electrolyzed water as a disinfectant and sanitizer has existed for decades in the agricultural, medical, and scientific communities, but never in a device that’s portable and made for consumers. The Egret EO Blaster scales the technology down and helps standardize it in a way where the electrolyzed water is always consistent in its potency. The only drawback to electrolyzed water is the fact that it needs to be used instantly since it loses its potency if left standing for too long, but the Egret EO Blaster’s patented technology can electrolyze water in just under a minute, giving you fresh, non-toxic, 100% natural, preservative-free disinfectant that replaces your need to constantly buy (and then subsequently throw away) multiple bottles of floor cleaner, air-freshener, sanitizer, detergent-spray, car-cleaner, food and utensil cleaner, or even bleach every single year. The Egret EO Blaster comes with the spraying device, a Type-C charging cable, a standardized spoon to measure out the table-salt, and a lifetime warranty on any manufacturing defects. The electrolyzer module lasts for 3 years with regular use, and doesn’t require any additional solvents, capsules, or parts to keep it running. Besides, it saves the earth, preventing harmful chemicals and plastic waste from entering the environment, and it saves you a fair bit of money too, given that you’re only using a couple of dollars worth of water and salt in an entire year! 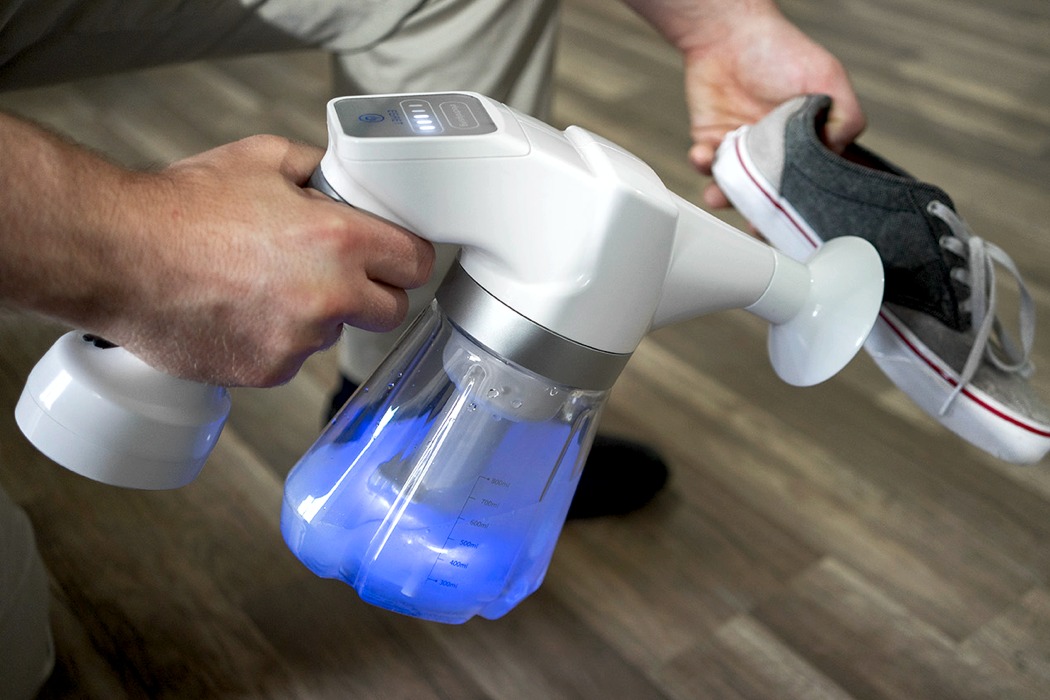 100% natural and non-toxic, using patented technology and the power of Electrolyzed water (EO water), the Egret kills germs and removes bad smells in your home in seconds. 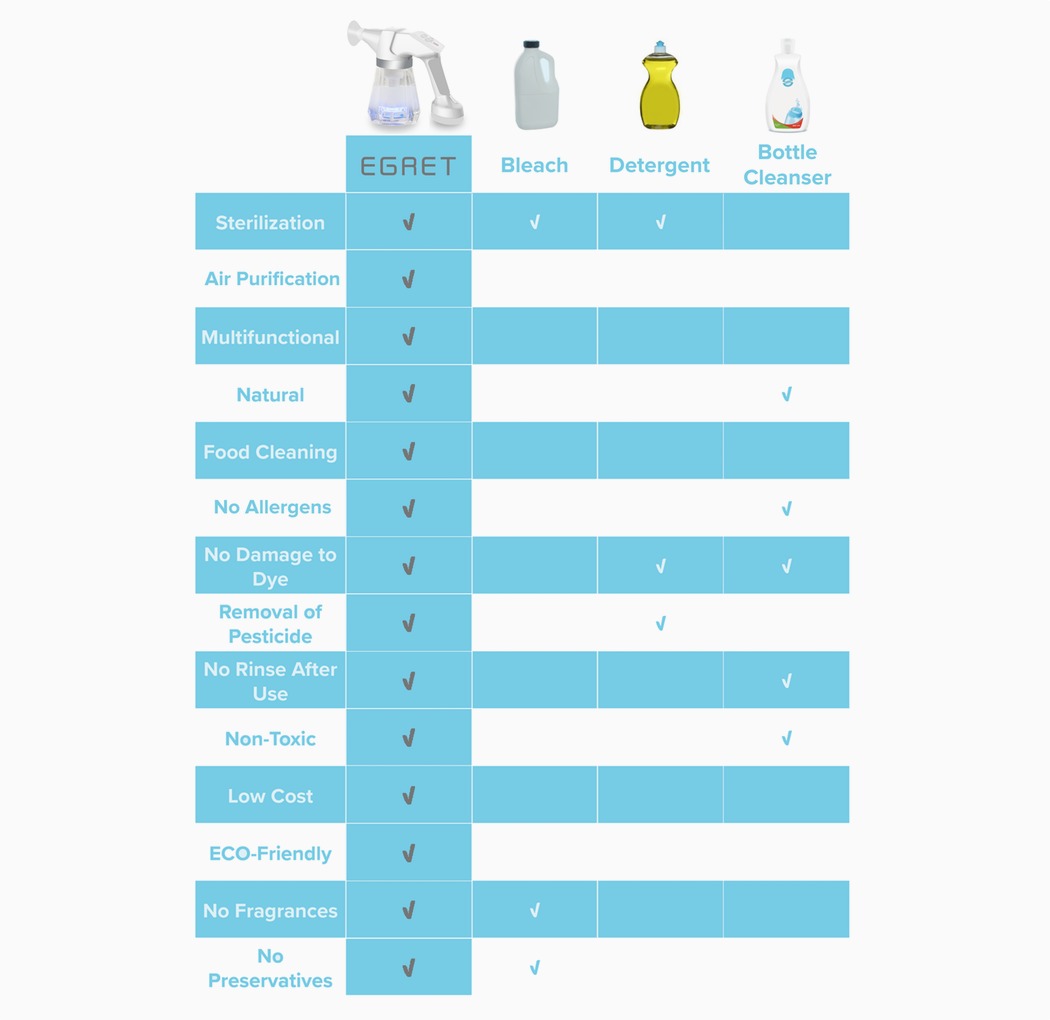 All you need to create this natural cleaning solution is tap water, home salt, and Egret. In 60 seconds, Egret creates EO water, ready for you to sterilize and remove odors anywhere you want.

With its fully-automatic spray mechanism, Egret produces a fine spray of EO water, able to reach those unreachable parts of your home, like the gaps in your sofa.

Egret can act as an air purifier which also removes the TVOC and PM2.5 particles in the air. It can protect you and your children away from these chemicals.

Egret will sterilize and deodorize everything even your clothes, carpets, furniture, shoes and anything else.

The Tech Behind How Egret Works 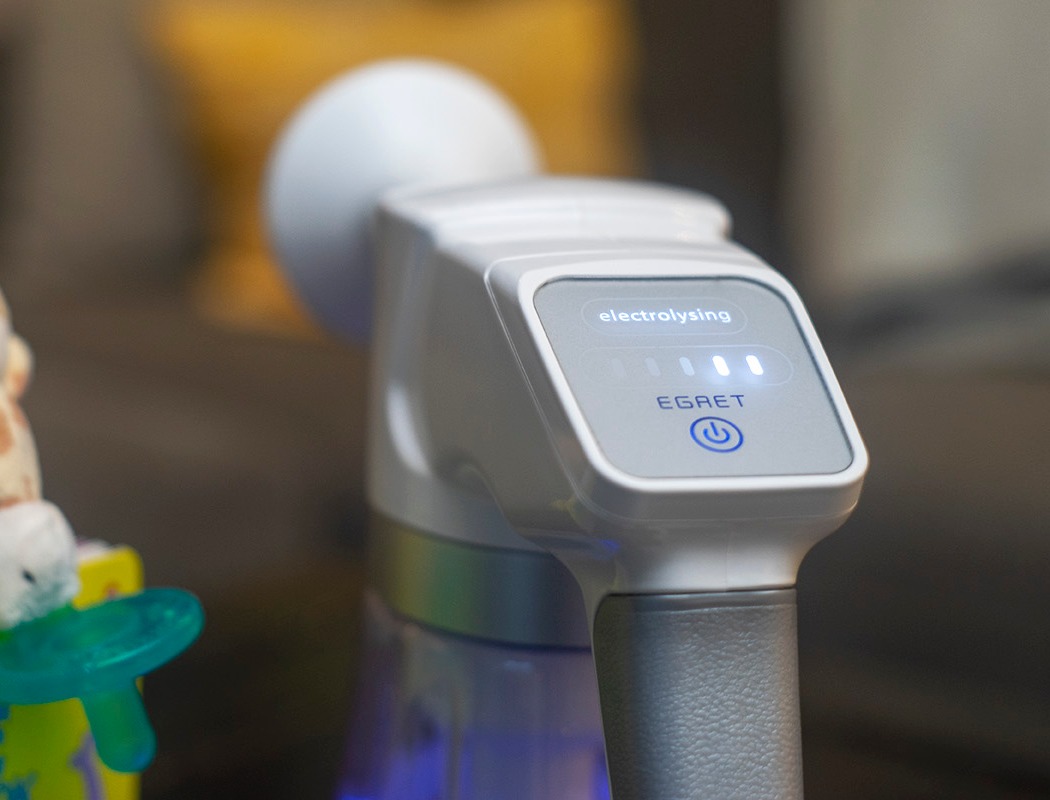 Egret works by harnessing the power of electrolyzed water, or EO water. When you pass electricity through a saltwater mixture, you create EO water. EO water:

– Exterminates 99.95% of viruses and germs that it comes into contact with.
– It is completely safe, sterile and non-toxic and eco-friendly!
– Literally blows up bacteria by breaking its outer cells and bursting it with water.

All you have to do is add tap water and a tablespoon of salt to your Egret device and wait 60 seconds.

The Science Behind the Tech 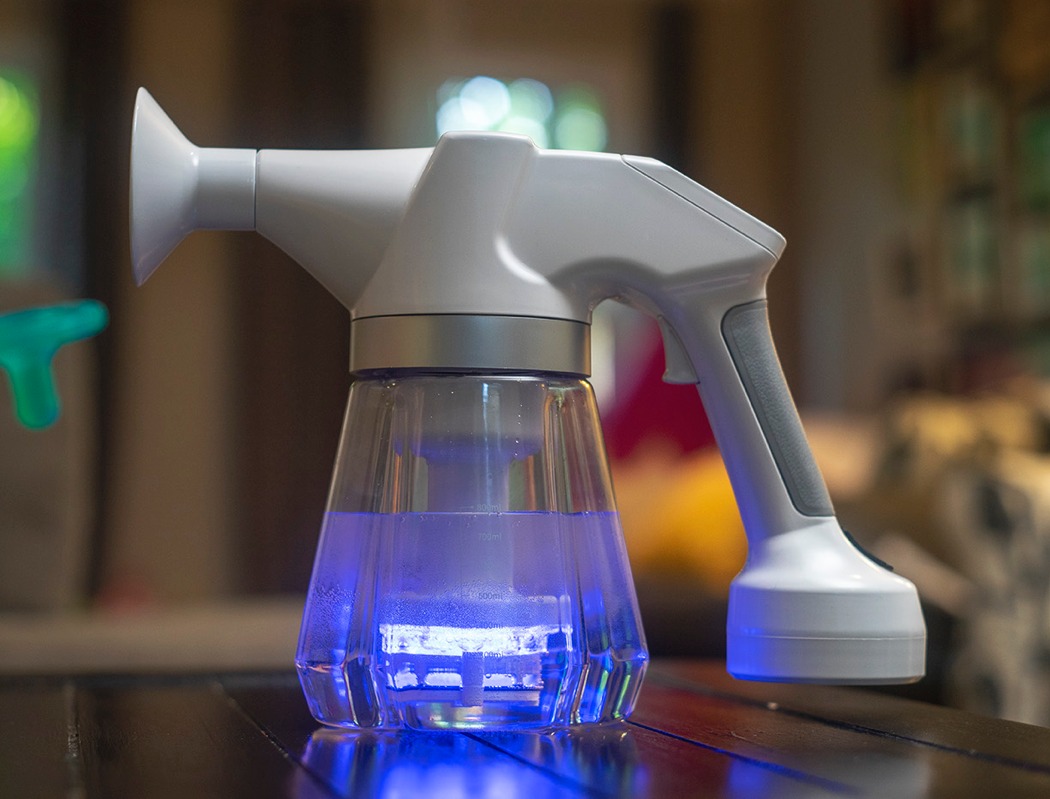 Hypochlorous acid and OH radicals are produced through electrolysis process from salt and water.

Hypochlorous acid is a safe sterilizer that works similar to bleach but without the toxic. It is suitable for cleaning baby items and even food. 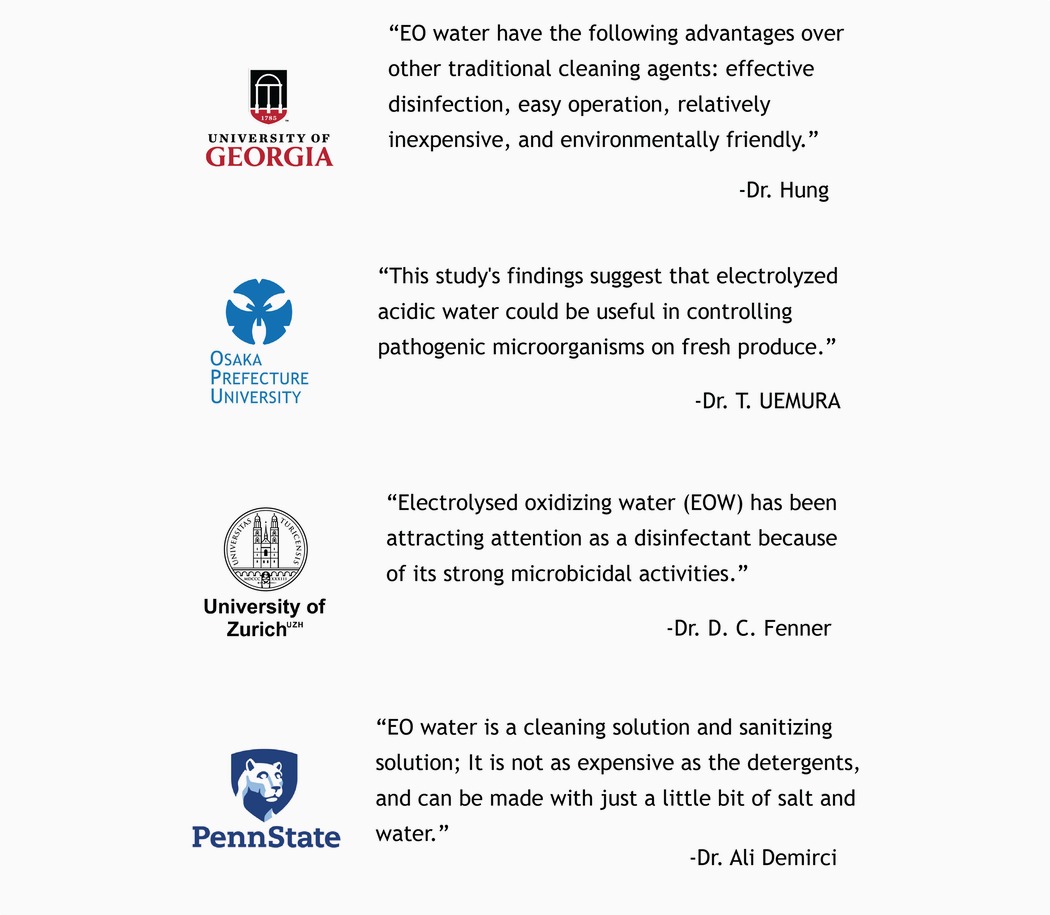 An independent third-party testing center, the SGS testing laboratory tested and analyzed the sterilization ability on bacteria and virus, the deodorization ability and pesticide removal ability of Egret.

The test results show that with only 30 seconds of exposure of EO water on the bacteria and virus, the killing rate was greater than 99.99%. Also, Egret removed all pesticides within 5 minutes.

Egret Works on Any Surface 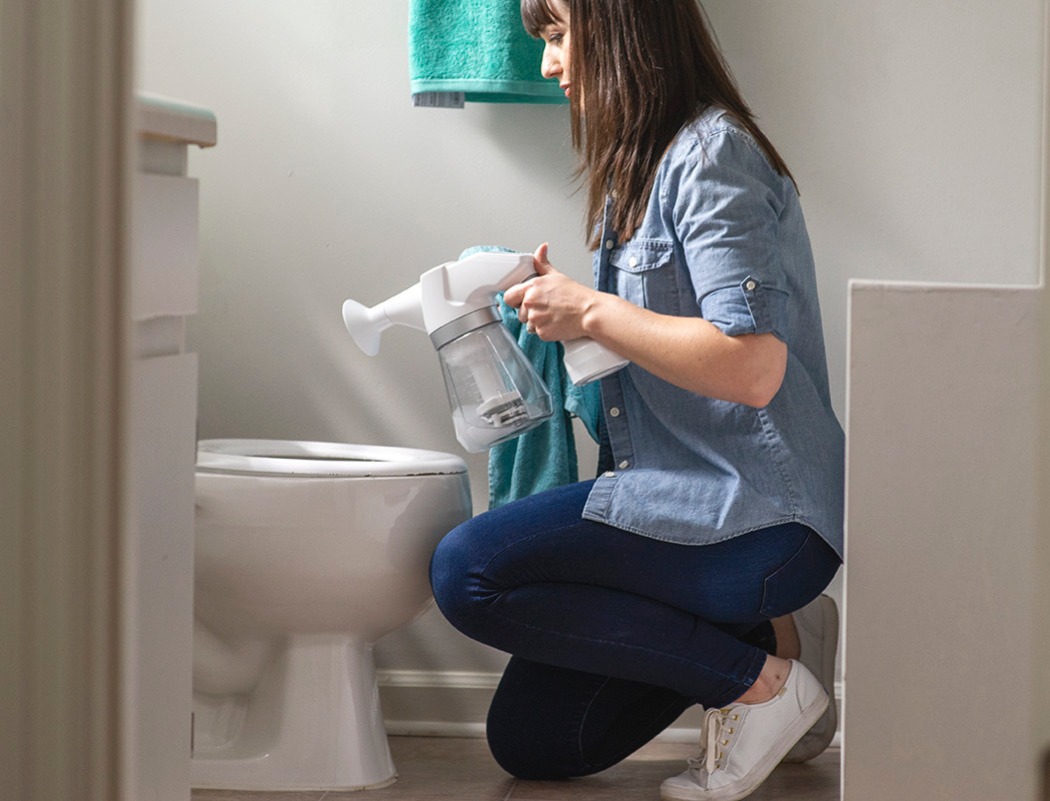 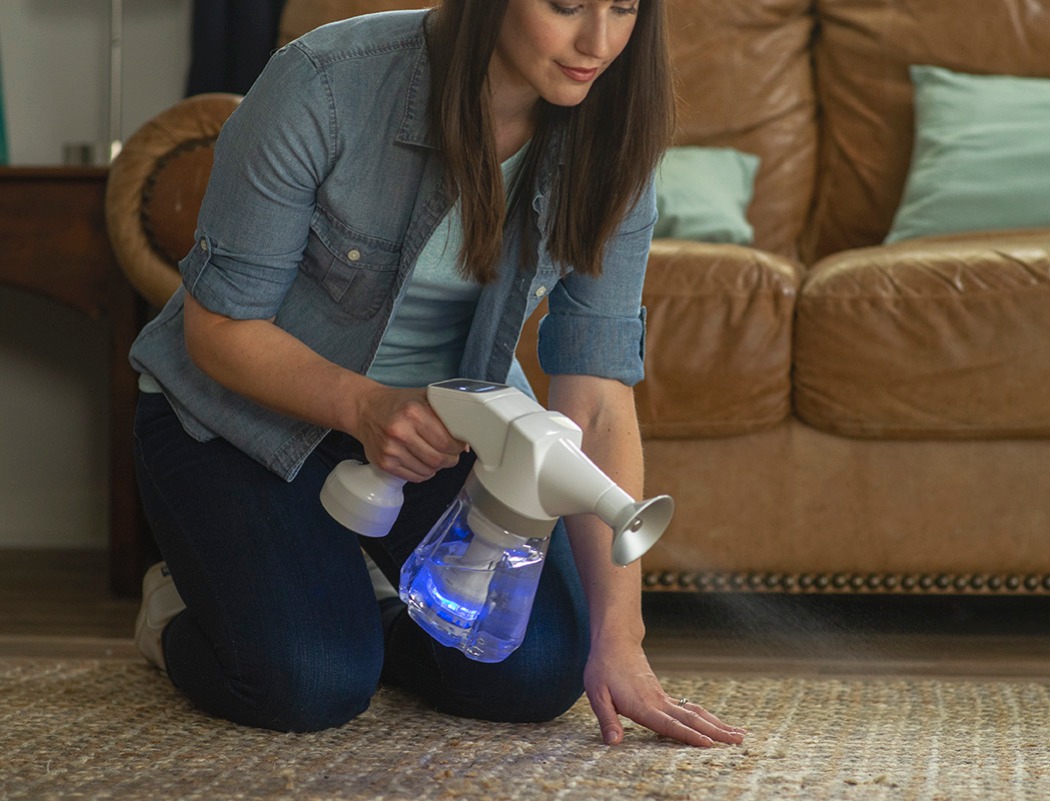 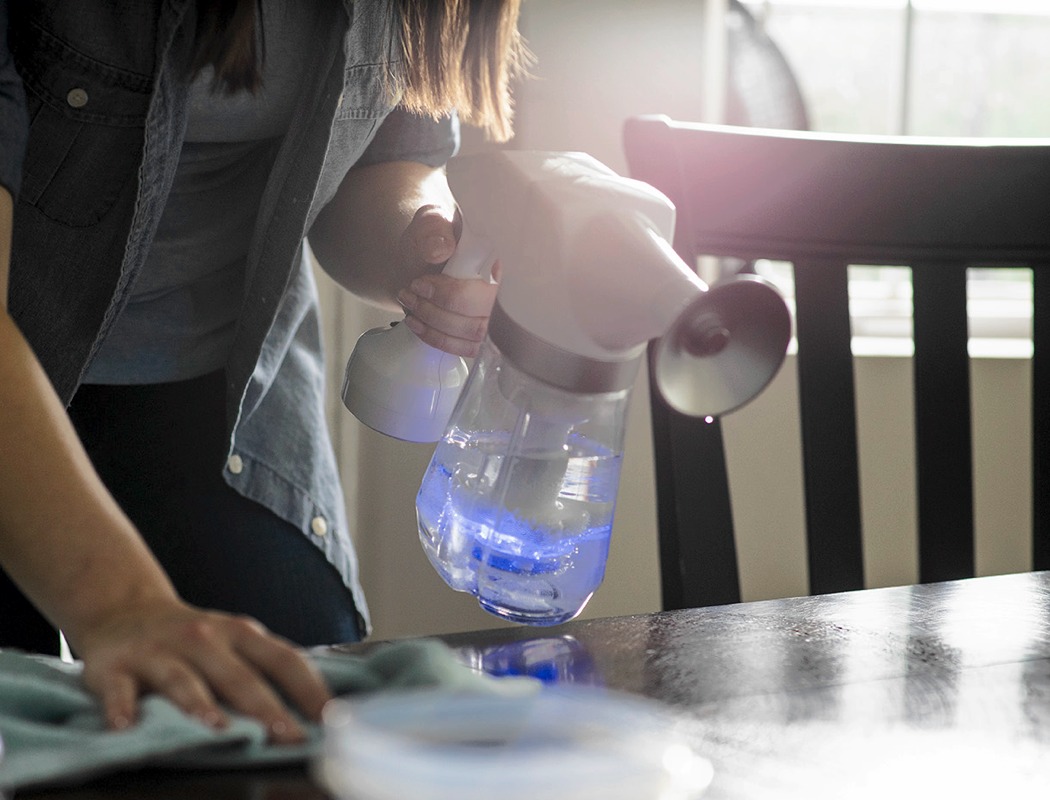 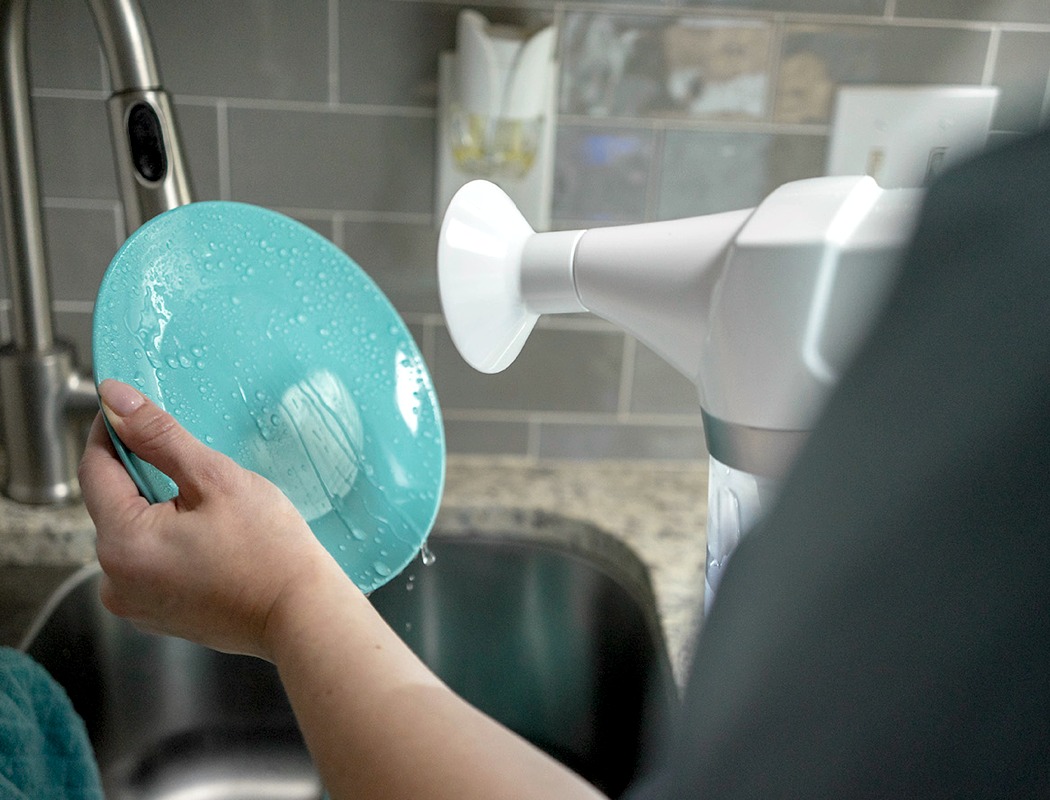 This colorful, marbled speaker is made from non-recyclable plastic waste

While plastic waste, to a certain degree, can be recycled, it’s just a small percentage of the total waste out there. Certain polymers grow past…

Soap Beam: So Fresh and So Clean

The aptly named Soap Beam might take inspiration from the shape of a soap bar, but it has next to nothing to do with getting…

A wallet for the Pantone Lover

If you’re a Pantone swatch-head (and most designers are), the DAX wallet is just the most yummy looking wallet out there. Born out of a…