These all-in-one gym sets keep getting smaller and smaller. The Monkii 360 is literally the size of a medicine ball, that houses a complete resistance training kit that allows you to get a full-body workout (with cardio) in just 4 grueling minutes.

The absolutely shredded dude in the video is in fact Dan Vinson, co-founder of Monkii (which coincidentally also happens to be the most backed fitness brand on Kickstarter). Vinson co-designed the Monkii 360 along with his partner David to be used for full-body core and cardio workouts. The monkii 360 training is based on the Tabata protocol, a form of high-intensity interval training that can help you increase endurance, work the core, lose weight, and even get stronger. The entire workout lasts as long as 4 minutes, which should roughly be shorter than the time it takes you to read this entire article. The Monkii 360 is a compact, universal piece of gear that can be used by anyone, anywhere.

The sphere’s unique shape elicits a physiological phenomenon known as irradiation – in short, the grip forces you to engage more muscles. The Monkii App comes with an entire suite of short, but highly effective workouts to be used with monkii 360. Whether you are a beginner or an advanced athlete, the Monkii App has a program for you. Another benefit of the Monkii training style is the workouts help access aerobic as well as anaerobic energy sources. They also work muscles all across your body, especially the ones in the core, giving you far more benefits in a 4-minute workout than you would get in an hour-long run. The Tabata protocol helps you achieve your fitness goals, whether they’re to up your stamina, burn fat, stay fit on a busy schedule, or just look like Dan, who believes that Monkii 360 helps you be physically prepared for the real world. The workout upgrades with your abilities too, thanks to weighted cores that fit inside the Monkii 360’s special hollow core. With a variety of weights, you can make your workout progressively more exerting, so that you have results that show… given Dan’s physique, I’ll take his word. Plus, when everything is said and done, the Monkii 360 hooks off the door, and fits right under your bed, in the closet, or into your backpack. Dare I say that this might be the most convenient way to prepare for your 2020 new year gymming resolution? 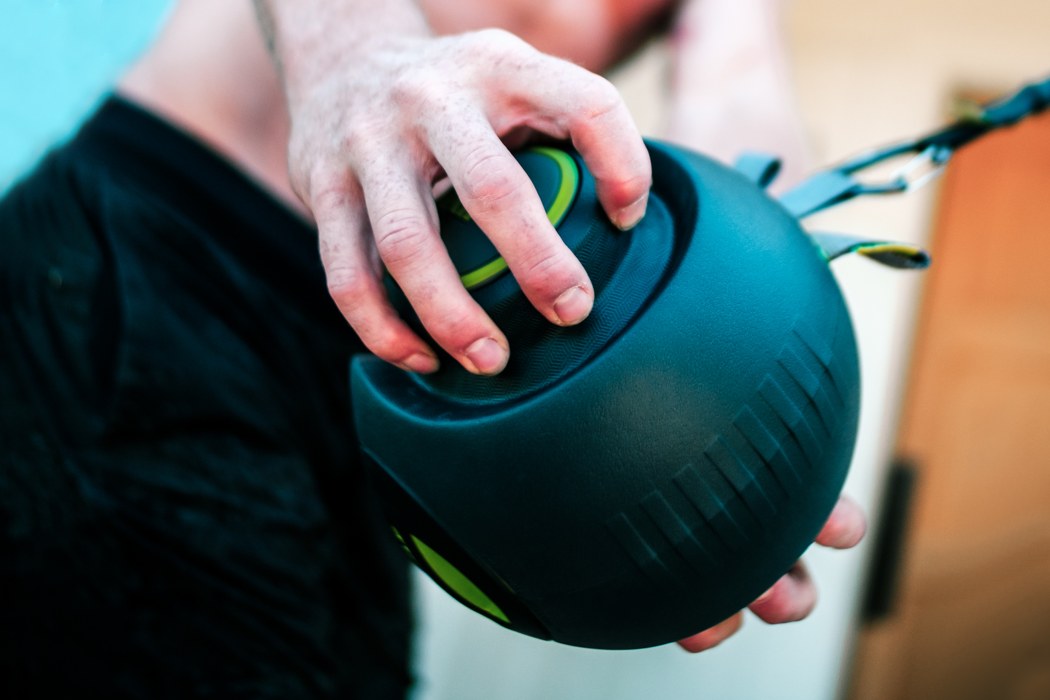 The science-backed, dynamic resistance trainer that will help you efficiently build muscle, strengthen your core, lose weight, and free you to do more of what you love. 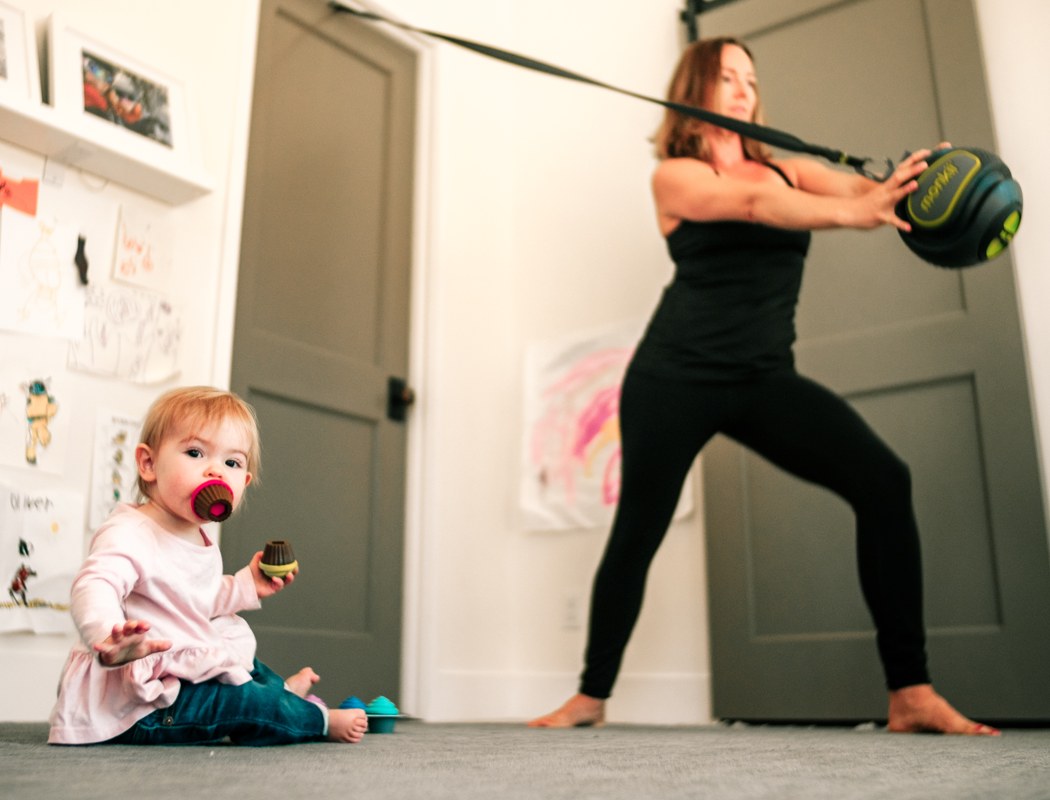 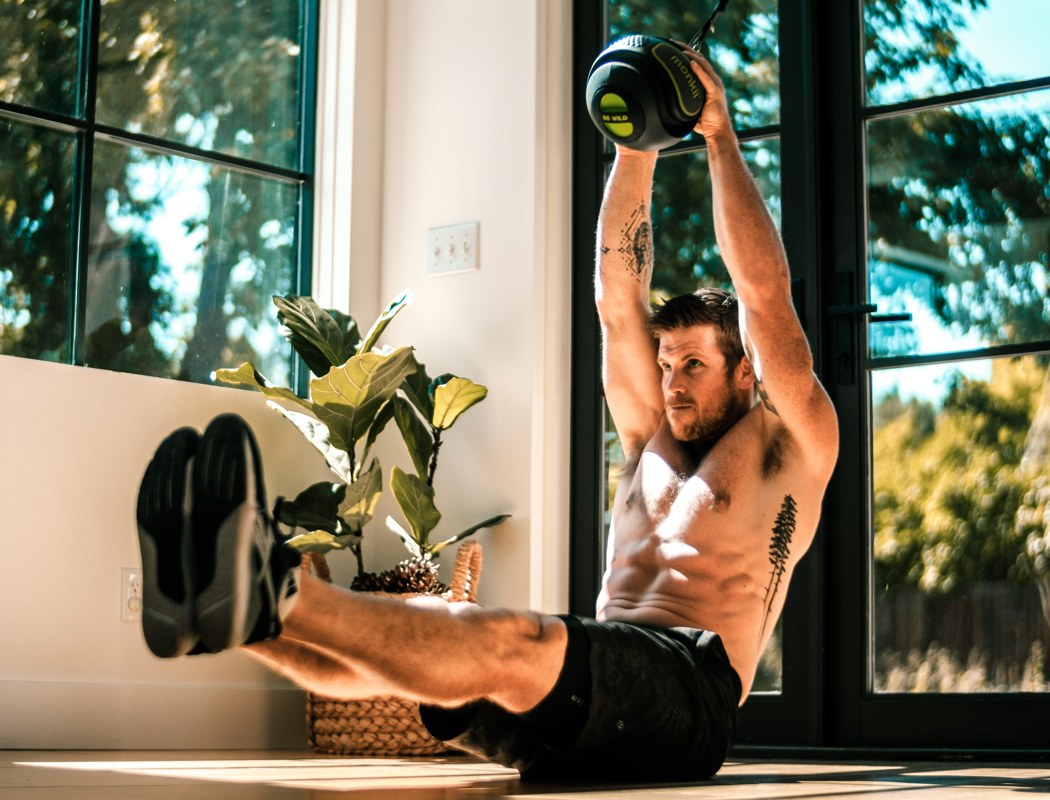 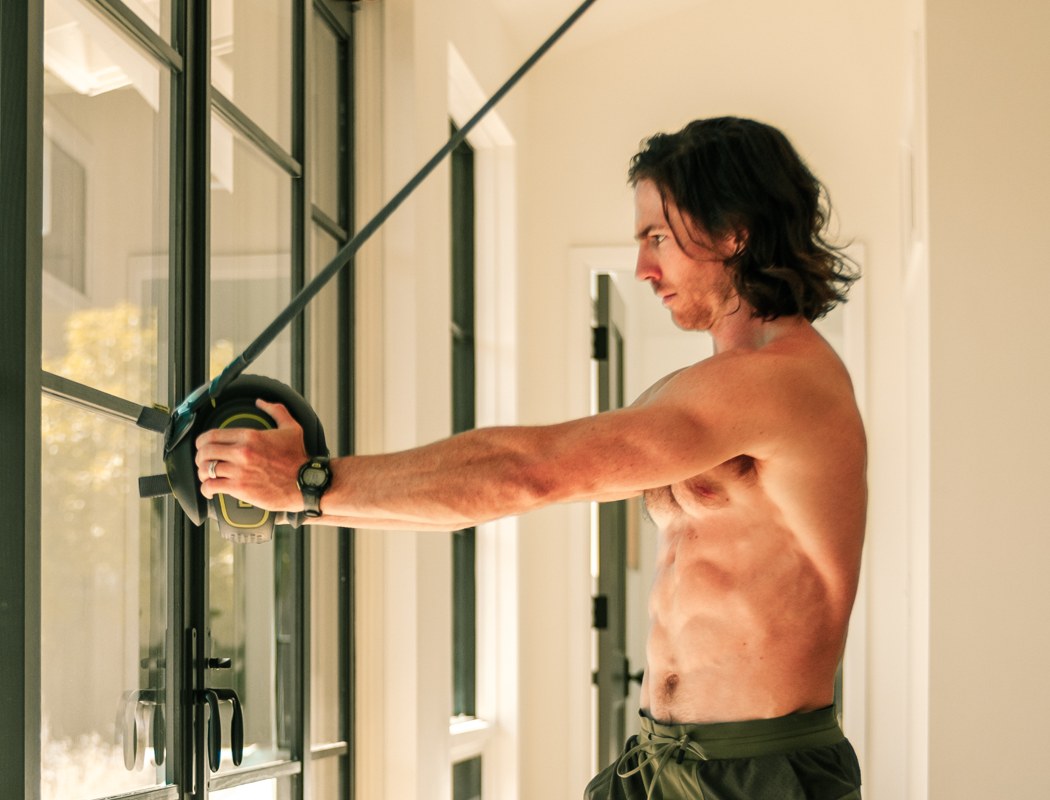 Instantly setup on any door!

Upgrade as You Get Stronger

MassCore. By adding a weight to the core of monkii 360, you are increasing leverage during their full range of motion movements. That core becomes much heavier the farther away from your body you extend it. Moving this additional weight requires more force, which in turn generates more power output. 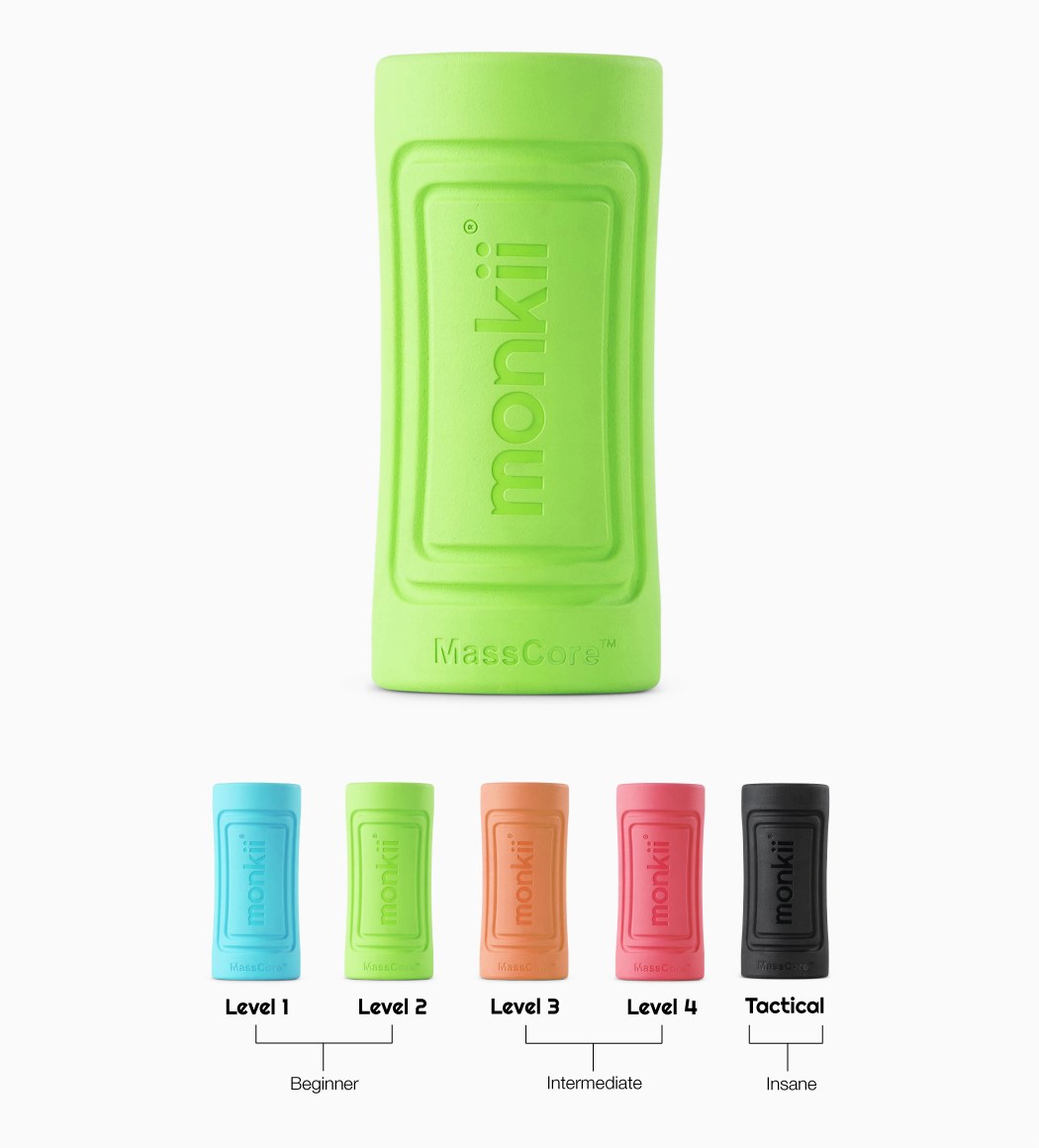 DynaForce Bungees. Dynamic resistance keeps your muscles engaged through the entire range of motion so there is no wasted effort. This efficiency is increased through our proprietary sheath. Not only does the bungee create resistance, but the sheath does as well.

Hands-free monkii app. It walks you through each exercise and daily workouts.

Their patented grip design activates more muscles – from your hands to your core – through a biological phenomenon called irradiation.

Using a science-backed training philosophy based on the Tabata Protocol, you’ll train in short, intense 20 second bursts. This supercharges your V02 max and engages the aerobic and anaerobic energy systems.

The result of 4 minutes of monkii 360 is more effective than an hour-long run. *SOURCE: Tabata Study: Medicine & Science in Sports & Exercise. October, 1996. 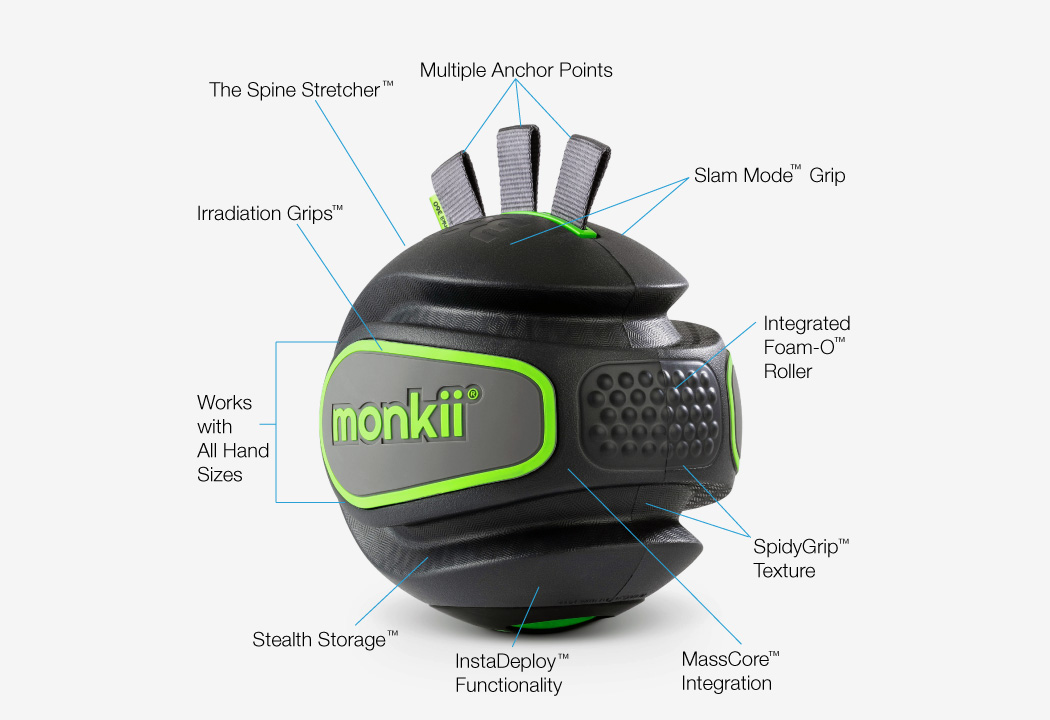 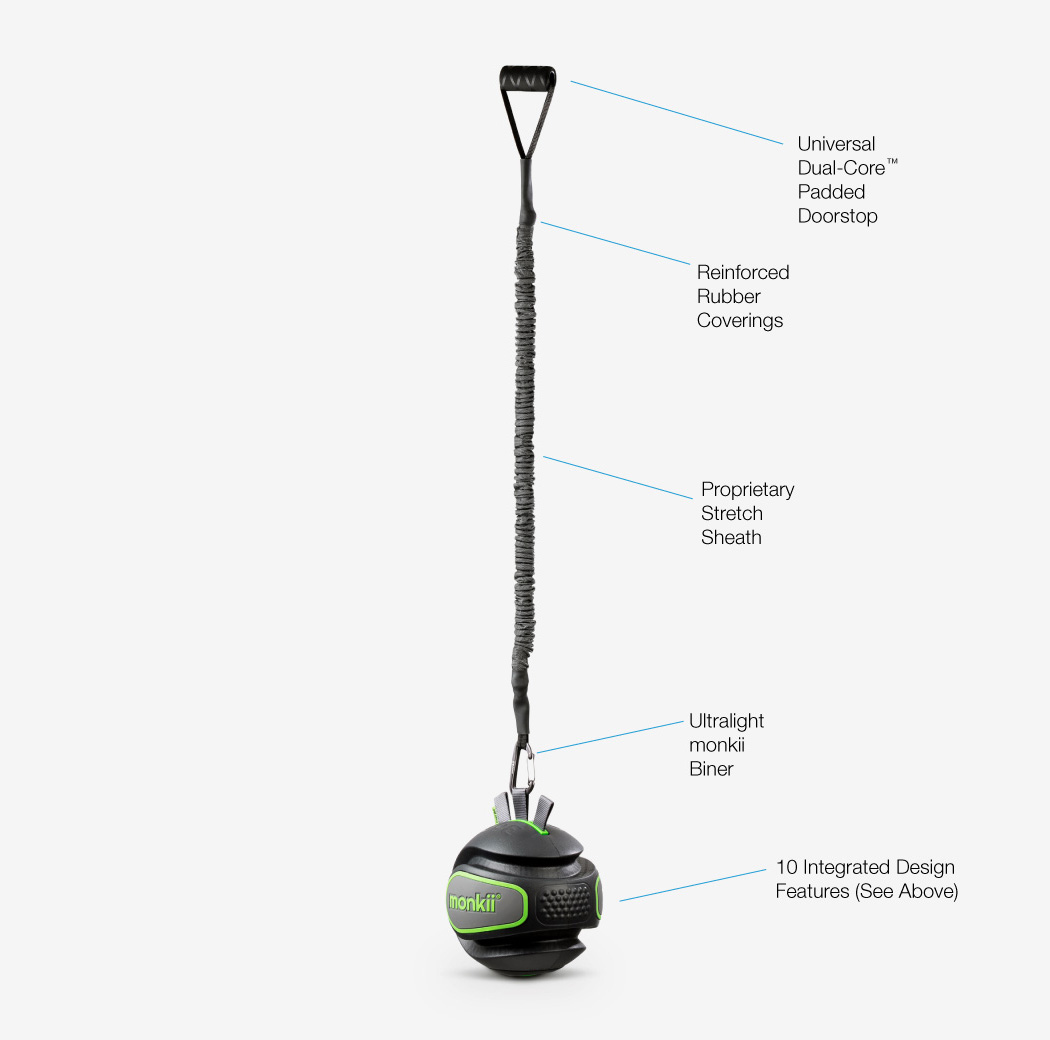 Their patented design seamlessly stores everything inside. 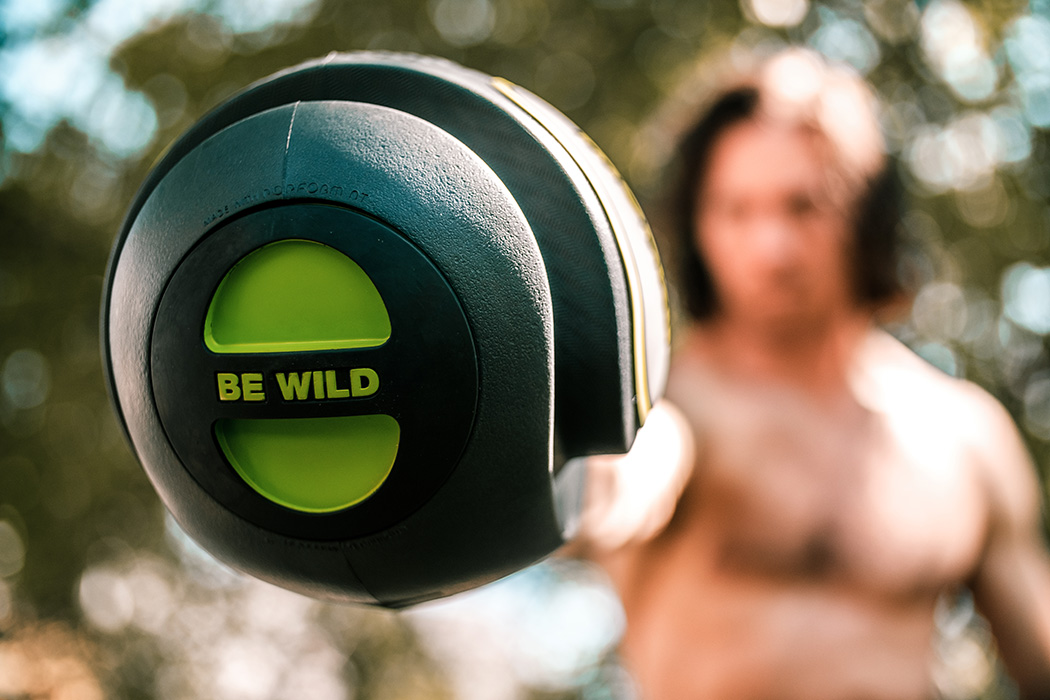 Just as the name suggests, the Honey Strip looks to one of mother nature’s unique, natural geometries for inspiration! Like honeycomb, each hexagonal cell can…

2 seconds. That’s all it takes to fold and unfold this incredibly convenient electric scooter! Folding makes it portable for urban commuters – you can…

https://www.kickstarter.com/projects/olto8-infinity/infinity-ii-every-second-on-your-wrist-becomes-unique? Watches and Automobiles have a richly intertwined history. Not only are watches used to measure things like speed, lap-times, and decide who the winner…