Just hours ago, at Lenovo’s Transform event in NY, we got a glimpse of probably the most outlandish concept design from the tech giant, almost giving us a sense of deja-vu as we’ve seen design students propose concepts like this all the time (and get dismissed rather aggressively by naysayers), but never has it seemed so exciting because Lenovo claims they intend on launching this one-of-a-kind laptop at the end of the year.

Taking its Yoga range a little too seriously, Lenovo announced the anniversary edition of the Thinkpad, a truly offbeat, futuristic laptop that folds open and closed, not via a hinge, but using a technology that gives the laptop a property to be truly flexible. It may seem unbelievable but Lenovo’s rather invested in this technology and they did debut a working model of the bendable phone in October last year. The initial portrayal of the concept immediately shows off the bending body that one-ups Microsoft’s Surface Book by even getting the screen (almost squarish, rather than the accepted 16:9 ratio) to bend. The laptop does away with the trackpad and comes with a pencil/stylus that allows you to use the device like a notebook. The way it bends too almost gives it the appearance of a folio, maybe going so far as to encourage you to carry and use it like one. (Slip a couple of A4 sheets in, who knows really?)
This laptop may be unbreakable too, much like the bending phone revealed last year!

It’s great to see companies follow this trend of outlandish-concept, something we’ve seen students and independent designers do time and again. It’s important to create something that a human dismisses as impossible and not-going-to-happen, because what people deem as unrealistic often transform into stepping stones for what we see becoming achievable in the future. Lenovo plans to debut the laptop design sometime around October, but for now all we have is this announcement. Do check out the Lenovo Transform keynote above… the laptop announcement falls at the 2:20:30 mark! 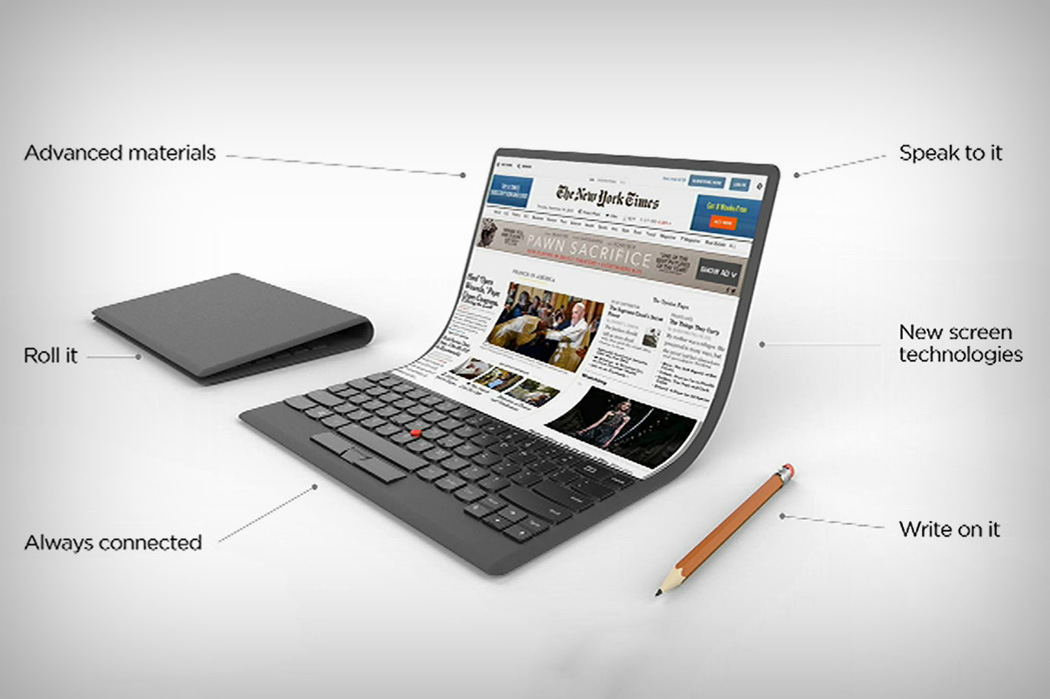 https://www.kickstarter.com/projects/monkiibars/monkii-360 These all-in-one gym sets keep getting smaller and smaller. The Monkii 360 is literally the size of a medicine ball, that houses a complete…

Public lockers are particularly useful for passengers at airports and train stations, but the one-size-fits-all model needs some improvement! There’s no sense in paying the…