Hello you late to bedders, did you know we’re awake at the same time? The darkness makes it seem like you’re alone, but I will haunt you FOREVER! No, actually, what I’m saying is that lots of people, especially people who spend the majority of their time on these internets, stay up very late into the night (and usually into the morning then too.) Darkness, that’s where it’s at. It’s where all the good stuff happens if it’s winter, and it’s where it’s funny to run around in a tshirt in the summer. But once inside, we gonna need us a clock.

This is the “Clock for Night Owl” by designer Tiancheng Luo, and it’s made for those folks to stay up into the darkness. The wakie time for these people, you and I, is very different from that of your average human, in that while they’re asleep, we’re probably not.

Here’s a clock for all of that loveliness. 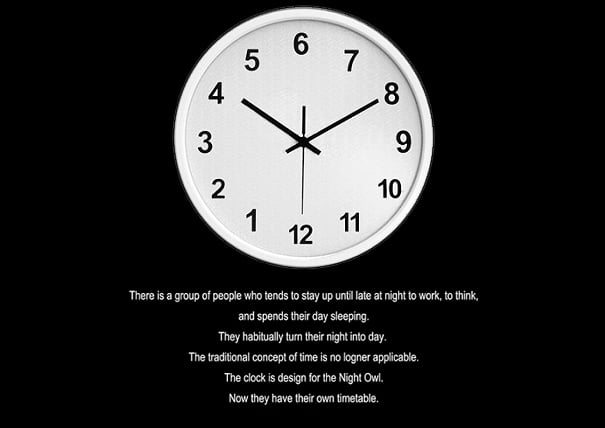 From industrial tools to incredible EDC!

Tiny, yet dangerous, the Japanese Kiridashi is a compact pocketable knife that’s often underestimated because of its size, but can outperform most knives. Make them…

Scissors are like the donkey of office supplies- they work well but aren’t much to look at! Until now…  “MATHEMATICS” scissors win first prize in…

If you’ve ever wanted to wake up to the chirping of birds, the Birdhouse Tiles are the best way to go about it. Not just…

Gardening is an extremely therapeutic activity, and though I may not engage in it all the time, the few times that I have, I found…