Do you remember in Point Break when Patrick Swayze put on his protective helmet before swimming out to ride that giant wave at the end? No you don’t, because wearing helmets is about as cool as riding a unicycle to work. To the designer’s credit, the entire project was about trying to make the helmet cooler and more acceptable to wear within our surfing cliques, but I think some things are beyond even the best of designers. 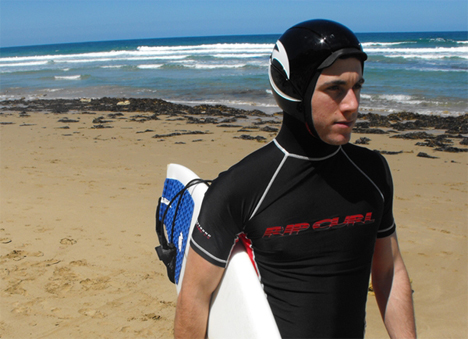 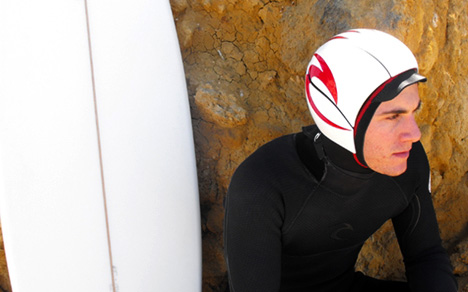 The protective hood is made up of two major sections, one being the hood and
rashvest, and the second being the hard shells. The rashvest, which is made of a
blend of bamboo fibres, recycled polyester and spandex, protecting the user from UV
rays, the cold water and wind-chill. The hood, which is connected to the rashvest,
is made of neoprene Velcro (loop), and this also protects the user from the cold water
and wind chill. 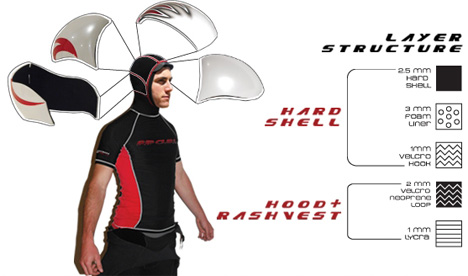 There are four hard shell components which the user attaches to the hood individually.
The benefits of the modularity include customization, and if the surfer happens to have
an accident and damage one of the shells, that single shell can be replaced as
opposed to replacing the whole product.

The product is stored in an easy to carry zip-up neoprene bag. Once at the beach the
user takes the product out of the bag, places the hood and rashvest on, which already
has three of the four hard-shells already attached, then attaches the one remaining
hard shell component on the back of the head.

Somebody get this lamp a cheeseburger because it is wayyyyyy skinny! It’s called the Lanx lamp and it highlights the extreme thinness of current OLED…

Bicycles need bling too. They may seem quite inconspicuous near a flashy chopper or convertible; even more so at night. The HueRay bike handle grip…

Thanks to a few incidents that rocked our world, a new trend was forced upon both employers and employees. Working from home was never going…

The second in a series of modern fireplaces by Davide Tonizzo, Murazzi brings warmth and coziness to any modern living space. Named after a riverside…