Designer Eugene Cheong brings you “Maestro,” laser and mp3 guitar learning aid. You put mp3s into the device via SD card, the songs are converted into guitar tablature, and the tablature is projected, with laser lights, onto the guitar fretboard as you play. No longer will there be a barrier between you and the great and powerful rock and roll god!

It is a rock and roll (laser show) fantasy!

The Maestro is a learning device that connects to any guitar. It is a compliment to any style of guitar (supposing the guitar isnt too radical) as well as any level of learner. Cheong’s main aim with this project is to create a device that bridges the gap between beginners and their fear “that music pedagogy is an elitist discipline.” Fear not, young one! For you will attack the music world head on- with lasers!

Check the words on the aesthetic end, or just skip over it and get to the juicy stuff:

Being a complementary product to the guitar, Maestro was design to complement it not only in function but also in form. Maestro has an extremely organic visual styling that suits almost any and every guitar. From a front profile Maestro blisters appropriately to indicate where the technical package of the product is housed and indicate to users where the business-end of the products are. From a top profile, the convex form of the front hood was design to indicate to users where the lasers are whilst protecting the lasers from coming into direct contact with the users eyes. The concaved, OLED screen however, does the opposite by inviting and providing users with a surface for data input and interaction. Black chrome as been used for the top bridge, locating arm and the feet to complement the gloss of the usual guitar visual language whilst a dark grey has been used for the main support and slips to provide a sense of neutrality so that Maestro is not particualrly biased towards any particular guitar. The design is highly emotive and funactional at the same time. The main sweep of Maestro not only complements the guitar but also provides careful consideration for individual strumming styles.

Welcome back to the rest of the world!

The device does not compromise the integrity of the guitars krangin’. The top bridge, feet, and locating arm are ABS plastic (chosen for moldability and affordability.) Bottom support and clips are die-casted magnesium alloy (chosen for lightness and rigidity.)

Attachment is as thus: once secure, the locating arm acts as one axis, then the lasers cooperate and consulate and calibrate – recognizing the frets on the board, locating the product on another axis. Once active, the device accepts mp3, midi or wav files, and “hrough software,” is converted to guitar tablature, then lit up on the frets as you play. That and the rest, apparently, is magic!

IMPORTANT Extra Note: (lol) the final note is that “The product will have to comply with Australian Standards (AS/NZS 2211.1 :1997) due to the class 111a lasers mounted in the product.” 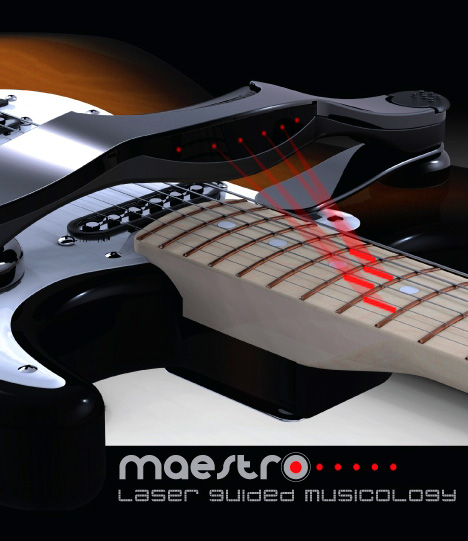 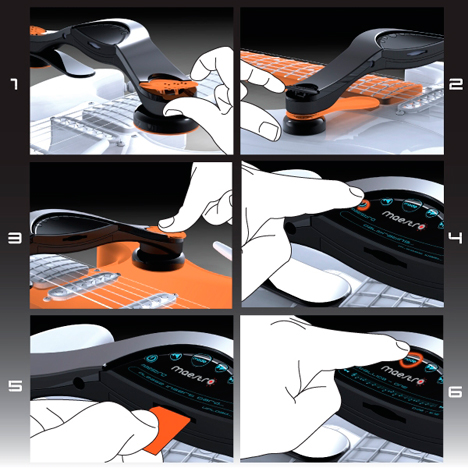 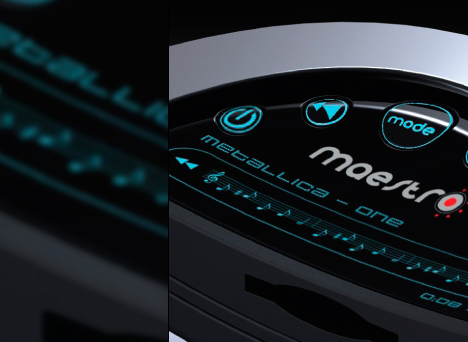 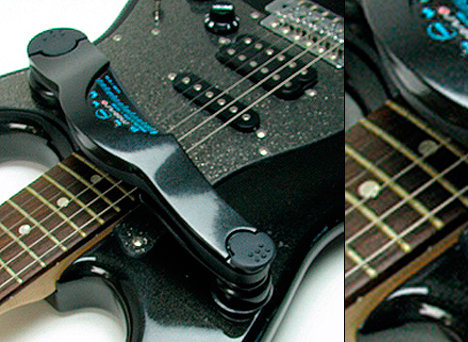 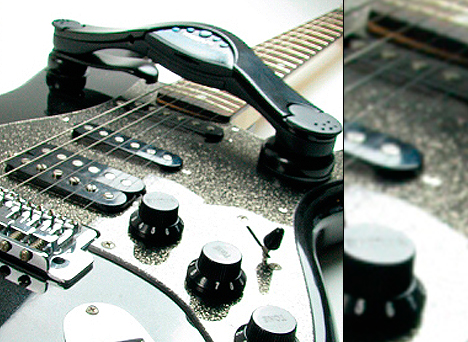 The MagicBoard is the perfect toy for the computer savvy and holds features that make me wanna drool! Picture this: a wireless Bluetooth, Wi-Fi enabled…

Your OCD Will Love This

The Lift Up Storage System introduces an entirely new way of organizing and storing your things and keeping them out-of-sight. The system is designed based on…