You need to know all about toilet water. Believe me. When you grow up, you’ll have a toilet of your own, and then, you will want to know all about the water in it. And so will your dog and maybe hamster. Hamsters are conscious about water waste.

“Antibacterial surface coatings and a non porus nano-glaze aid cleaning and flushing.” Holy crap that’s straight from the source, designer Alison Norcott. But the most important thing: the toilet uses an in-wall tank of used shower water to clean the toilet.

The water is treated minimally with “low powered ultrasonic irradiation.” The tank holds the water 24 hours max so it doesn’t get nasty. If there isn’t any water in the tank, the toilet runs on water like the average toilet.

And hey, that toilet bowl looks like it would release some nasty odors into the air because it doesn’t have the bend in the drain neck like good toilets should! You must be saying that. Check it out:

Due to the minimal treatment of the water, to adhere to health regulations, the toilet has been designed to eliminate user contact with the water during use. There is no water permanently in the bowl and during flushing the lid automatically locks. Antibacterial surface coatings and a non porus nano-glaze aid cleaning and flushing. To ensure bacteria contaminated air and spray doesn’t enter the room, an exhaust fan extracts air during flushing.

Now let’s make it easy to install (like the 4 screws and one hose toilet we all know, install, and love,) and we have a nice little thang goin on here.

The toilet itself is manufactured in the traditional way- slip cast vitreous china but has the added functionality of the high tech surface coatings. The in wall tank is rotationally moulded from polyethylene and all pipe work and fittings are standard.

TOILETRY UPDATE: I was mistaken above in saying the tubing does not have the traditional bend (to stop sewer fumes from coming in). As intrepid commenter “Melchior” has pointed out, the bend is there, it’s just in the tubing rather than in the toilet. Thanks Melchi! 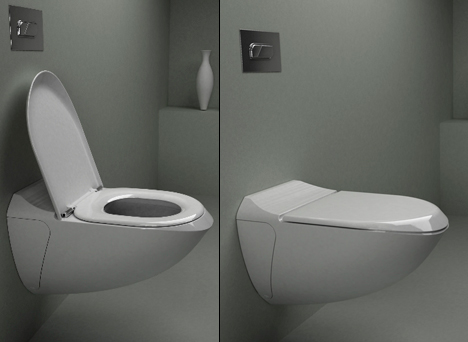 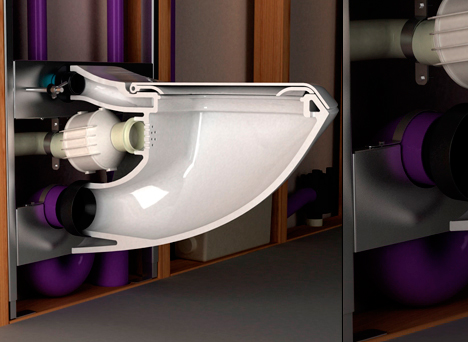 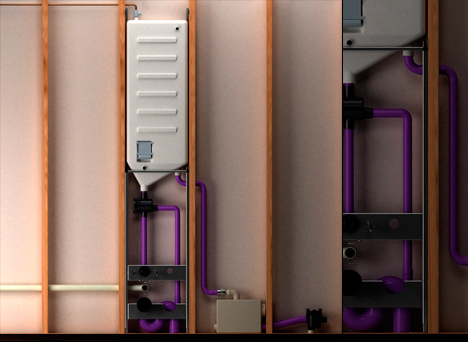 Inspired by the building blocks and modularity of LEGOs, the Windflock is a wind-energy system that is flexible. The ‘add-on’ system is made of mini windmills…

Imagine the device that unites everything that you carry along: a mobile phone, a player, your credit and discount cards, your apartment and your car keys….

I’m no green thumb, have never been good at growing plants, and the only thing that seems to stay alive is my cactus which by the…

You won’t catch me on my hands and knees sweeping with an old fashioned duster. No sir I prefer to use the power of a little…