Last week, the Port Authority of New York, New Jersey, and Santiago Calatrava released revised renderings of the World Trade Center Transportation Hub. I’ve always been enamored with the grand hubs of Europe so it’s about time we got something new.

As grand as this is, it’s hard to imagine this plan is scaled back, YES SCALED BACK. Gone are the sweeping column-free span, originally envisioned by the Spanish architect known for his expressionistic structures. Tapered columns have been added. The sad thing is the skylights, which were to bring natural light into the mezzanine have also been eliminated. Boo!

A number of reasons contributed to the scaled back plans, namely being cost and timeline. The original plan called for uncalled for amounts of steel and in today’s economy, cost projections sky rocketed. The new hub needs to be completed by 2012; tho that sounds far away, it really is only right around the corner. Even tho Calatrava’s original idea has been revised, I really hope it stands up to New York’s Grand Central. It could be a modern testament to urban mass transportation and give the city new architectural wonders to love. 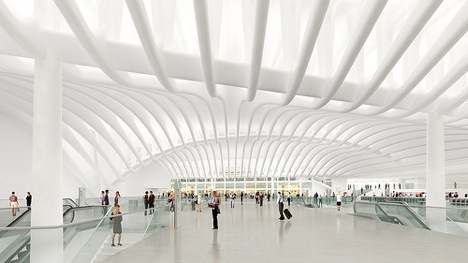 This transformative furniture lets you lounge on your desk during WFH

I am a huge foodie, and I have noticed this in both cuisine and design that the French love taking what you know, flipping it…

Concrete architectural designs that show why it is the future of modern architecture: Part 2

What is your definition of modern architecture? Is it tall glass skyscrapers? Or is the architecture better defined to you by the futuristic forms it…