I’m all for brain teasing toys but I never had a knack for them. I blame my parents. Don’t make the same mistake and get your kids an OBLO – a 3D didactic puzzle sure to gift them with powers in spacial geometry. Designer Marko Pavlovic believes it engages children on an emotional level and encourages growth thru the development of investigative and problem solving skills. Intrigued?

OBLO is a 3D puzzle made of differently sized, shaped and colored spherical elements that need to be twisted against the central axis in order to disassemble and fully reassemble the toy. It consists of an outer round layer (the container), a lid and 10 removable pieces. OBLO is colored with three primary colors and one secondary color to appeal to its audience, children between the ages of two and five. Color is also used to emphasize the different layers lodged inside the toy.

In order to successfully progress from one level to the next, the child needs to find the correct orientation for each piece that will enable their smooth passage through the fixed opening in the outer layer. Using this method, the spherical elements work as part of a bigger unity. The link that connects all the pieces is their shape, which matches the opening in the outer layer.

The degree of difficulty can be modified for different age groups. To make OBLO easier, the open space in the outer layer can be enlarged. On the contrary, the difficulty level can be increased by using a larger variety of shape types. Also, the number of layers can be increased by reducing the thickness of each layer or by modifying of the diameter of the outer layer itself. Colors can also influence the degree of difficulty.

By playing with OBLO, children are encouraged to discover new possibilities, new ways of disassembling and reassembling the pieces. Through interaction, the toy’s didactic features are emphasized in an imperceptible way to the child. However, for parents, the secondary target audience, this will be an important marketable element. 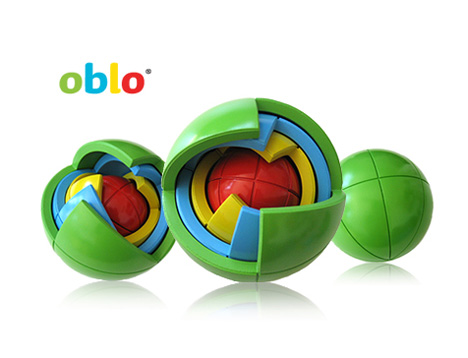 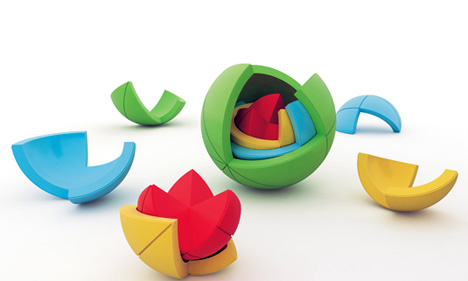 Keeping track of our health has become almost a necessity these days. Knowing not only the number of steps we’ve taken but also our heart’s…

Who wouldn’t love a pillow made up of velcro corn kernels, show of hands please. The Sweetcorn Pillow makes all your corny fantasies come true….

The designers of the Le Pli lamp call it “plain looking” but plain has never looked so pretty! Cleverly constructed almost entirely of folded paper,…

A single modular element is the essence of this new shelving system by Movisi. With its unique design and ability to be changed instantly, the…