The wedding chapel isn’t a building type with a great architectural pedigree; it’s usually a cue for syrupy swags and allusions aplenty to classical temples and Rococo palaces, all crammed into a structure that wouldn’t look out of place in a trailer park.

But given the right brief, the genre offers plenty of scope for small scale innovation, as in the small Chapel of La Estancia by Bunker Arquitectura. The owners of the colonial-era gardens in Cuernavaca, just south of Mexico City, had built up a business offering wedding packages to young couples, and originally wanted an ersatz colonial-style chapel structure in which to host the ceremonies.

Happily, Bunker persuaded them otherwise, and set to work devising a modern, functional yet undeniably romantic setting for the events. Initial plans for a glass-walled building were opposed by the client, who claimed – quite reasonably – that it would heat up throughout the day and make ceremonies sweaty and unbearable. But Bunker stuck to their guns, explaining that their solution involved a latticework of opaque glass beams, arranged vertically and set apart from one another to create a ‘veil’ running around the entire structure that allows air to move freely. Above this sits a solid roof, its shape devised by the shearing, pinching and shifting of the original box-shaped volume, forming a simple yet elegant shallow pitch.

The end wall contains a cross set into the glass fins, while the floor is a humble white concrete slab (toned down from the original marble due to budget considerations). The structure replaces the canvas tent that used to be used for the ceremonies, yet retains an alluring air of impermanence and lightness. 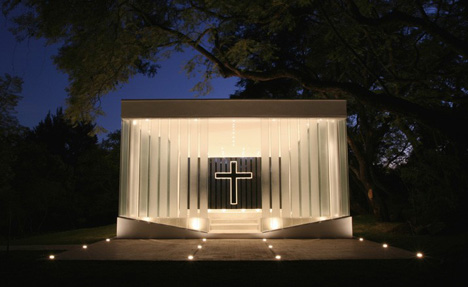 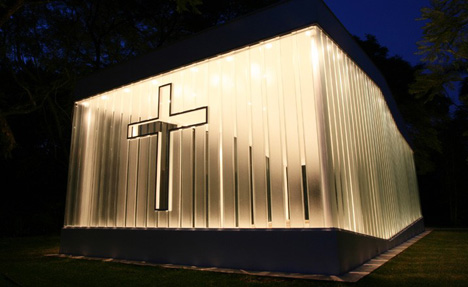 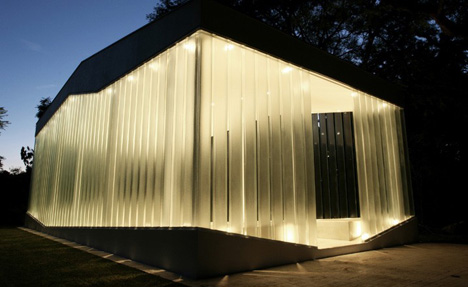 Conceived as box-shaped wireframe, the Car And Shell Skyscraper: Or Marinetti’s Monster – Vertical Suburban Neighborhood, is the answer to the congestion problem experience in…

Ben Walker Architects worked upon and rejuvenated a 1950s ‘Tocumwal’ cottage in Canberra’s Inner North. Tocumwal houses are quite iconic in the Canberra region and…

The Cube will be a five-star condo hotel, a unique and innovative landmark tower that will occupy a prime location within Dubai Sports City, right…