This guest post on Urban Croquet is by designer Alice Kaiserswerth. When John Jaques made croquet an overnight craze in England 150 years ago, he packaged a game that fit perfectly into the physical and social spaces of the mid 19th Century – casual, fun, social, and played in the spacious gardens of the gentry or any clearing sufficient to install hoops and stakes. The free-wheeling spirit of those formative days of croquet is gone forever. Or is it? Alice Kaiserswerth decided to take on the challenge of recreating croquet as a “universal” pastime for the 21st century. Her design covers everything from playing surfaces (anything) to clothing (mostly white) and players (youngish and beautiful, naturally). Clearly, such a reinvention could never be realized by croquet associations and clubs, or even motivated entrepreneurs. The project Alice designed with the support of Adidas would have to be done by a corporation, backed with a sizable investment in advertising and promotion. The stodgy image of croquet would have to be entirely reshaped. What are the chances such a thing could ever happen?

“Urban Croquet” is a total design concept that adapts traditional “garden” croquet to urban spaces and populations. Freed of fixed spaces and strict rules, croquet becomes a new experience and an expression of an active, youthful lifestyle. The design project was completed in cooperation with Adidas.

All parts of the croquet design follow a single design language linked by materials, colors and shapes – not just the croquet equipment but also clothing, bags, fashion accessories and shoes.

The idea for the project came from a game of croquet I played a few years ago in a friend’s garden. Everyone was really enthusiastic about playing the game because it was easy to learn and allowed a lot of social interaction. And so, inspired by Internet articles on croquet, I decided to create a new type of gameset, and to use my designs as my graduation thesis.

The basic concept was to shift the croquet experience to unaccustomed surroundings, especially urban areas, places where croquet couldn’t or wouldn’t otherwise be played; traditional attitudes of the game would be expanded and linked to modern street culture. The project, I thought, should include a whole range of croquet gear and fashion. The consumer mindset I tried to target is influenced by values like credibility and simplicity and inspired by sport and music culture. 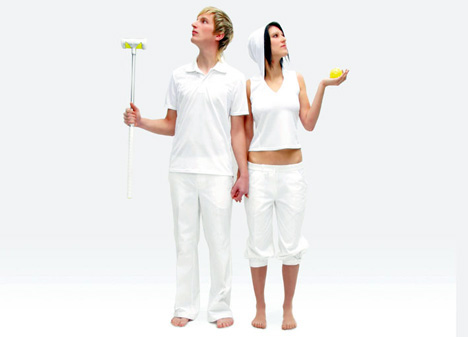 With the overall concept in place, I identifed Adidas Originals as the brand to work with – the perfect fit for what I had in mind. They look to the past for inspiration, but create new designs for the authentic and contemporary products of the future. All the products of the brand have a clear foundation in sport but are meant for lifestyle and street wear.

My first steps in working on the project were self-experimentation. Equipped with a cheap croquet set from the supermarket, I invited some friends to play with it in all the areas of the city we could imagine. Although the gear wasn’t made for these urban conditions, I saw what great fun it would be to have equipment actually designed for play in all these different surroundings. I learned a lot about what was needed to optimize the gear and began to appreciate how great was the potential for recreating the game for contemporary lifestyles as “Urban Croquet.” 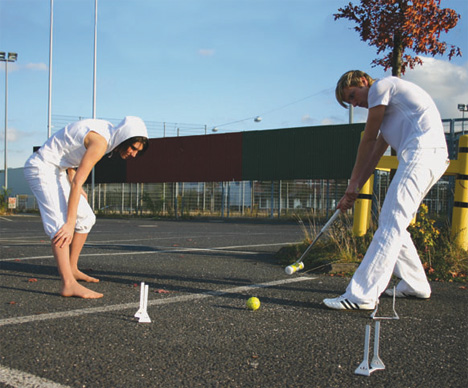 Alice designed a straightforward solution to the problem of installing hoops on hard surfaces: the tops of the stick-in hoops shown here on grass are weighted and flattened, so they can be turned upside down and set flat on hard surfaces like this asphalt parking lot. A thin layer of rubber prevents slide.

To find out more about high-level, organized croquet I asked Jörn Vinnen, chairman of the Hamburg Croquet Club, if I could take part in one of their training sessions. It was very interesting to see how different their game is from the ordinary garden croquet we played: strict rules, fixed spaces and regulated surfaces and dimensions, but with a lot of tradition and style.

After doing all the research I defined the item range of the “urban croquet collection” including game set, fashion and shoes. All elements of the range had to be modified to match the new “urban” requirements for game play. One of the main needs I saw was mobility and versatility. In contrast to “serious” croquet, the permanent search for more exciting courses made it important to create compact and lightweight equipment.

The size of the mallets could be reduced to a length of 52 cm, enabling storage with all the other elements in an easy-to-carry bag. 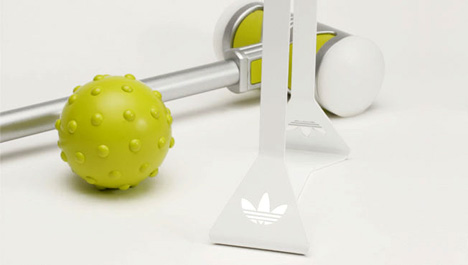 Dozens of raised dots on the ball enable it to be played on hard surfaces. The balls and hoops had to be redesigned to suit all the surface conditions one might encounter in urban spaces. On grass, the hoops can be stuck into the ground like conventional hoops. But on asphalt, concrete, indoor carpets, or any other hard, fast surface, they can be turned upside down and stand on their own.

On hard surfaces, balls don’t stop as they would on grass; but with a pattern structure on the balls’ surface, their rolling characteristics will be much the same on both grass and asphalt.

Durability was another important consideration. The plastic caps on the outside of the mallets are exchangeable and the main material used for the mallets and the hoops is aluminum, combining stability and light weight.

The croquet clothing bows to the all-white tradition of the sport, echoed in all the elements of the design. But as a pop accent, the tops come also in the four croquet colors. The collection includes shirts and pants for both genders and skirts especially for the girls. All the clothes are made of soft and light fabrics such as cotton, polyester and mesh to ensure a comfortable fit and breathability.

The shoe is made in soft leather with mesh elements. Two innovations help to improve the beloved “foot” shot: the “croquet dot” is a recess on the bottom of the outsole to keep the ball firmly in place; and the outsole wrapping houses two rubber caps to protect the foot when the ball is hit by the mallet.

The croquet shoe has two features especially designed with “footing the ball” in mind: a recess on the bottom to help hold the ball securely in place; and extra protection in the outsole wrapping for the times when you hit your foot instead of the ball.

The “Urban Croquet” collection charts a new direction for the croquet gear of the future. It is not intended to replace the traditional croquet sport, though it could help to recreate the spirit of the game in modern surroundings and make it accessible to young people in the cities. But until that happens – until all these unified design elements are actually manufactured and promoted in the marketplace – it is just a design concept.

While I’m a certified coffee addict and cannot function well without a cup of caffeine, I’m not really that particular with where it comes from….

These modular tiny homes have been grouped together to make a sustainable ski resort!

Are You the Keymaster?

Well that is nice, but I am not the Gatekeeper. What we’ve got here is the “Dreamgate Wallband” from Studio 1a.m.. What it does is…

This tiny Microlino camper trailer with a retractable kitchen is for urban adventure seekers!

Normally when you think about Overlanding, camper trailer, or living on the go – it is about powerful all-wheel drives hooked onto a trailer with…