Introducing the wrist MP3 player designed for runners. Designed to be everything you wanted in an MP3 player, with the benefit of you not even knowing it’s there. On the surface of the player, an OLED is housed underneath a layer of polycarbonate. On the outer edge of the player is a jog wheel (with bumps), which is a tactile sensitive ring that can be rotated in either direction. This jog wheel controls the tracking of the song or the volume. The user can switch between volume and tracking mode via the button on the outside.

There is no headphone jack. The player would use Bluetooth headphone, eliminating the tangled mess of wires that conventional headphones have but adding to the sensation that you feel like you aren’t even wearing a music player. 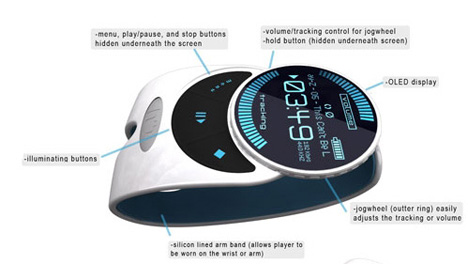 This minimal handle-free knife will take you back to the Stone Age!

With trending diets and food habits such as the Paleo diet traveling back to our Paleolithic roots, and focusing on foods similar to those eaten…

Pandemic Multitools may just be the new EDC category that’s here to stay and between you and me, I’m not sure if I’m enthused or…

Built with graphene based technology, Solus is the most efficient radiator

https://www.kickstarter.com/projects/koleda/solus-the-most-efficient-radiator-in-the-world/? The humble domestic radiator is something which is often overlooked within the design world, and because of this the inefficient, money-sapping and visually out-dated…