A new system to use as a curtain. My idea behind it is to eliminate the colossus which arise when curtains are opened. The challenge is to change a big surface into a small form in different ways. Playing with forms and positions. From large to small in different ways. Born out of irritation with the heavy, massive curtains which absorb the light even when they are open.

Pull the cords beside the curtain and the curtain will begin to move. The triangles are fold together one by one. The curtain forms and changes all the time, it becomes alive. Geometric shapes are formed. Until the form will be stopped in the corner. A weight will unfold the form after releasing the cord. 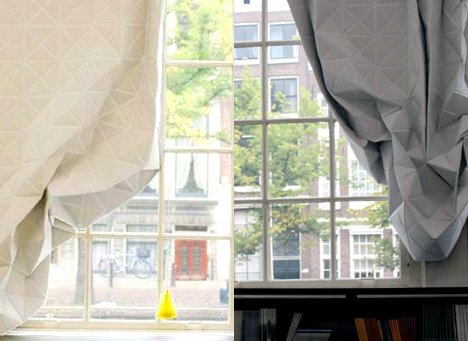 Kitchen Control On A Pad

Moshi is a multipurpose kitchenette that includes the induction cooking hub, dish washer, sink, fridge and washing machine in one structure. The entire gamut of…

Bobby Berk would approve of this modular, wooden cabinet inspired by the phases of the moon!

I love modular, easy-to-assemble furniture that is designed to adapt to your space – big or small. Right now IKEA is the biggest player in…

You are going to have basically a totally amazing time when you get your hands on this paper accessory combo. You’ve got the Magazine Hanger…

Update: Back in July 2007 we published a concept furniture called “Loopita” which we knew was going to be an instant hit. We been informed…