The computer mouse today may look a bit different compared to its first incarnation, but the fundamental design of this important input device hasn’t exactly changed over the decades. That, unfortunately, also means that the problems associated with this old design haven’t really disappeared either, especially those that cause physical injury over time. There has been a great deal of interest lately in redesigning the mouse to be more ergonomic, but not everyone agrees that changing the shape is enough. This design concept, for example, takes a very different approach to resolving the problem of repetitive strain injury or RSI, mostly by shifting the movement away from the arm and wrists and giving your upper body a workout instead. 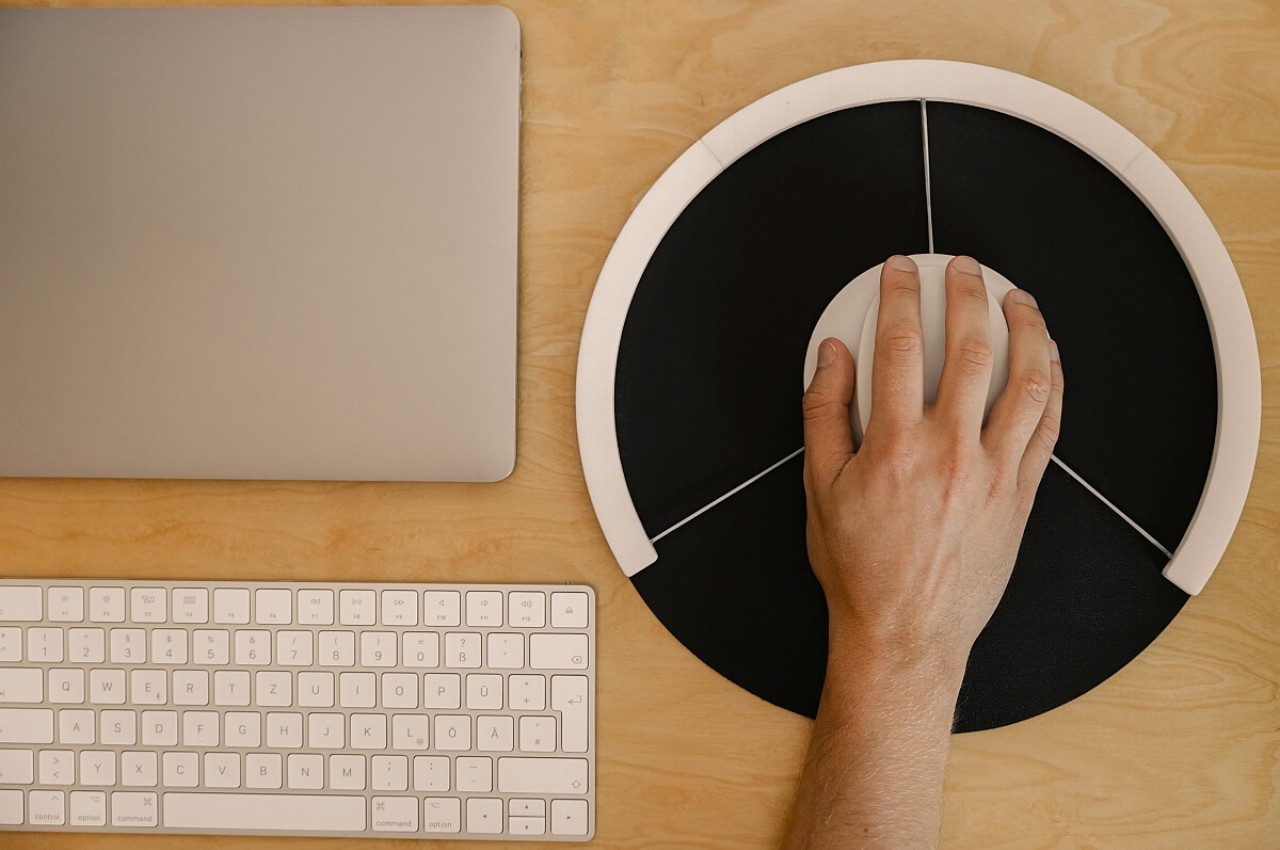 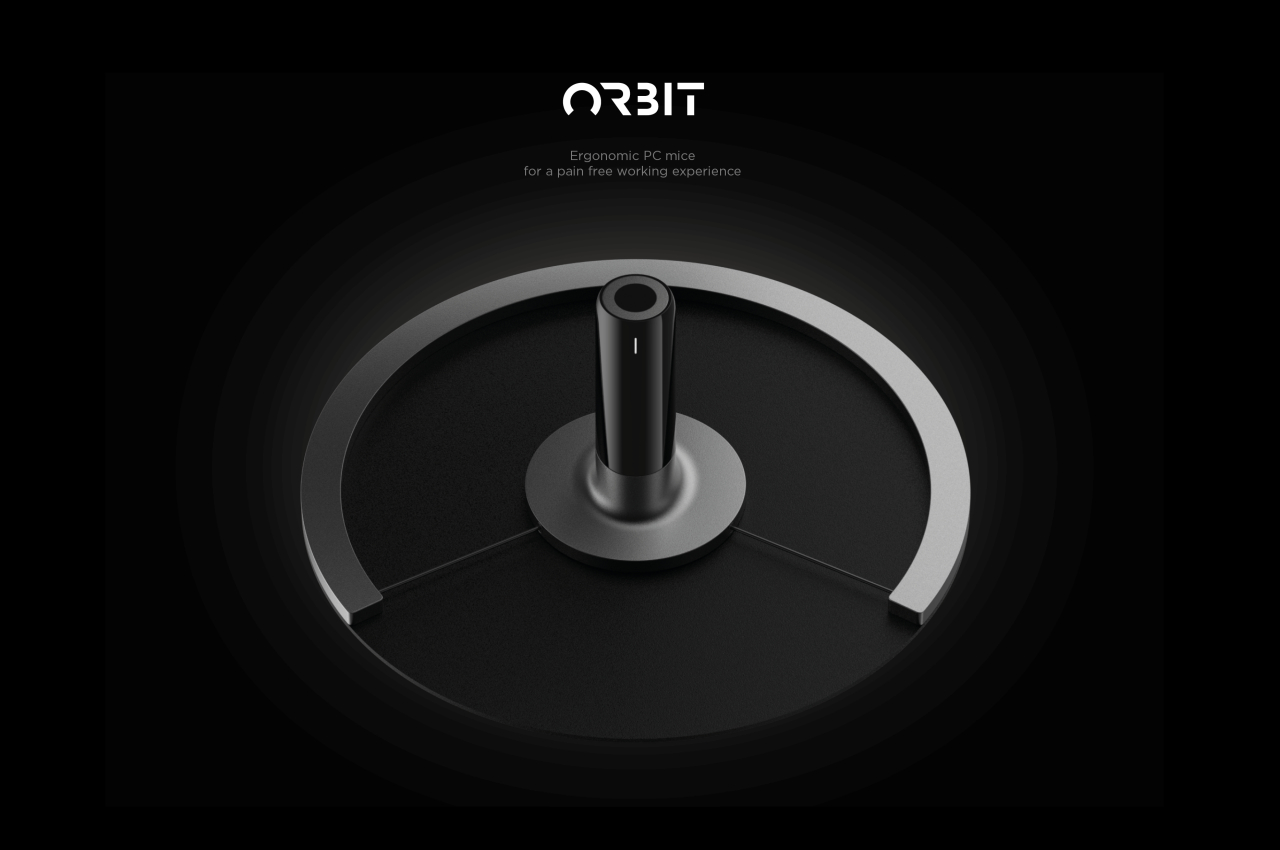 The computer mouse and even the computer keyboard are very unnatural interfaces as far as our bodies are concerned. Especially with the mouse, the hand and the arm it’s attached to are forced into an unnatural position, whether it is in motion or at rest. The movements associated with prolonged and repeated use of the mouse eventually lead to what is sometimes called “mouse arm,” as well as the injuries that come with it. You might think that your arm is getting some exercise, but it’s really the wrong kind of movement and resting position that actually causes those injuries. 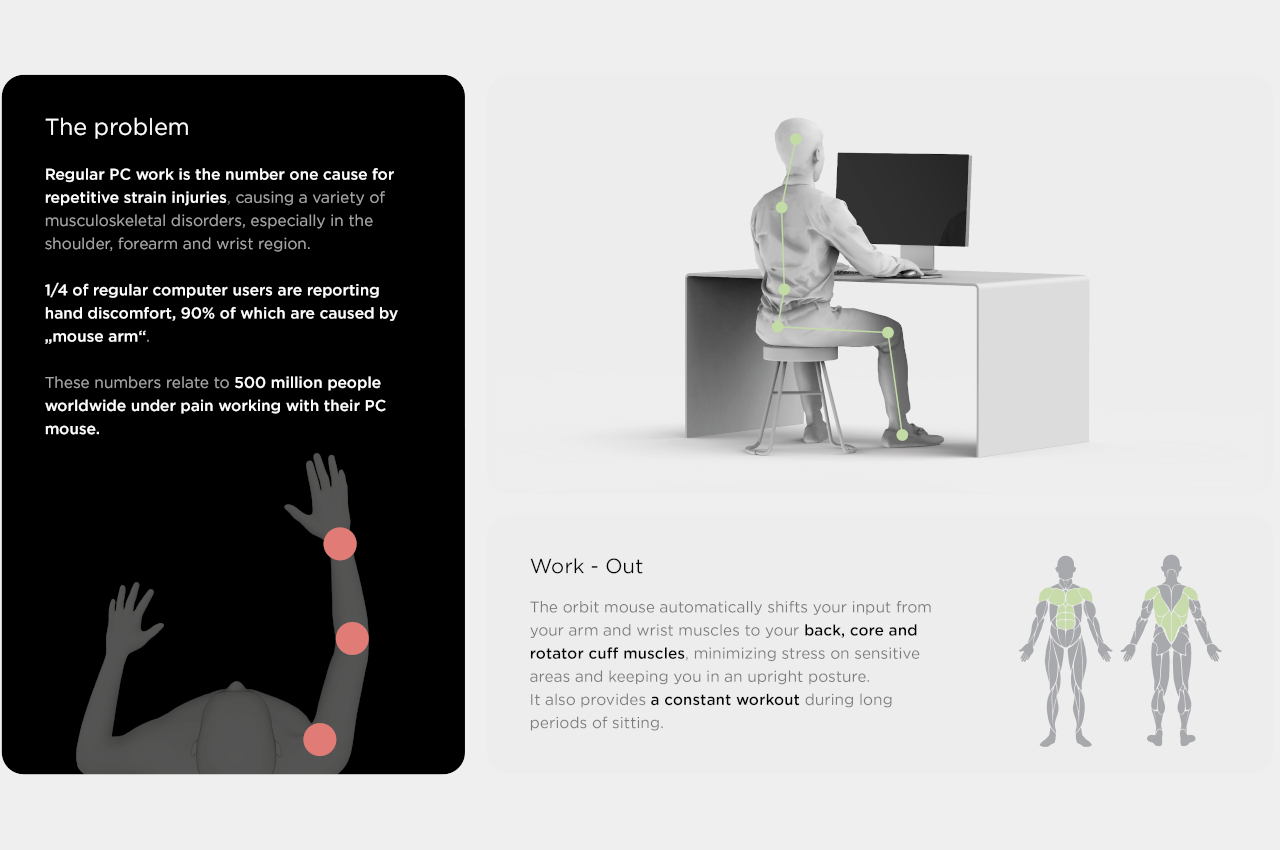 Ergonomic mice can only do so much since it simply shifts the tension and strain to other parts of the hand and arm. Orthopedists and physiotherapists might have a different idea on how to solve this problem, and it unsurprisingly involves using correct movements and posture. What may come as a surprise, however, is how this can be done by simply changing the way we use the mouse. 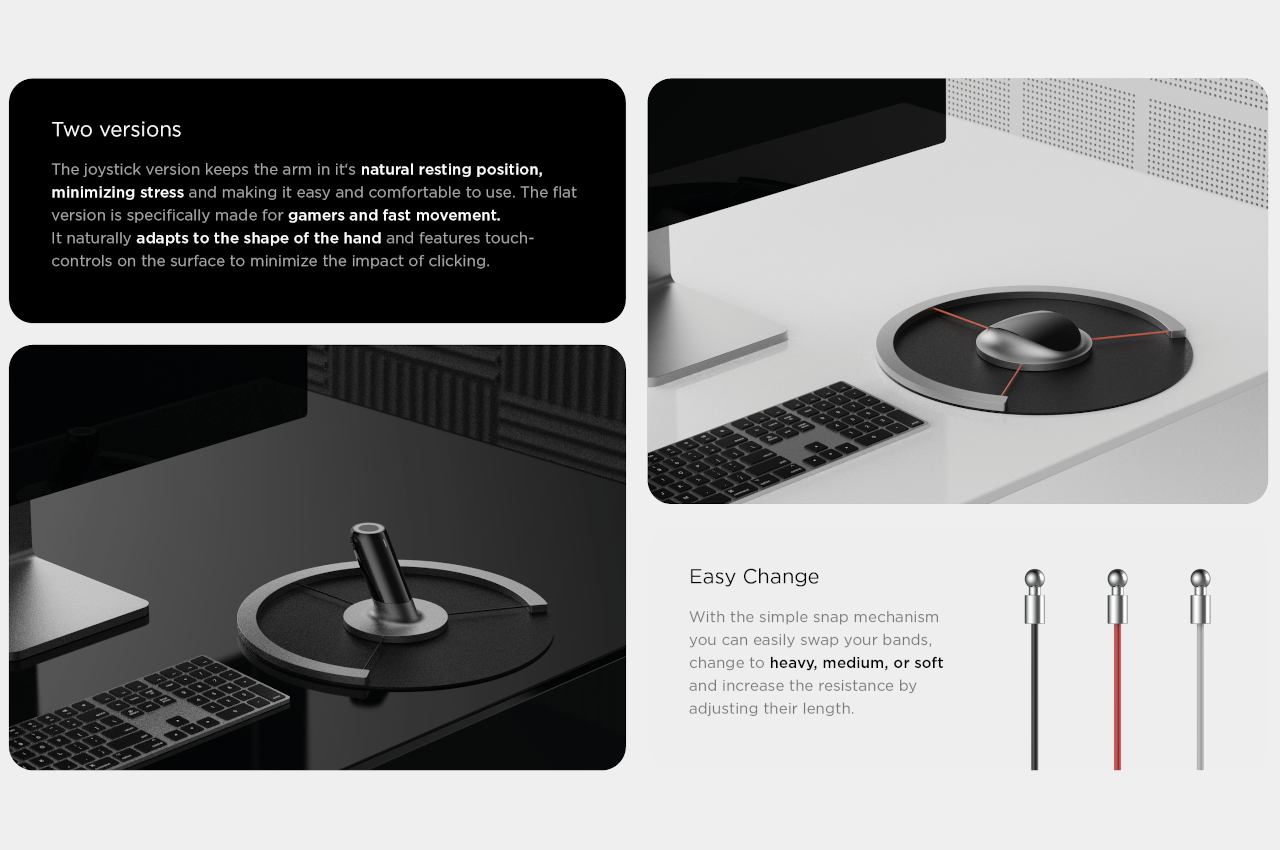 James Dyson Award national winner Orbit redesigns the mouse not by changing its shape but by changing the way we move it across a flat surface. Instead of simply sliding over a mouse pad, Orbit has three resistance bands that hold the “mouse” in the center. To move the mouse, you have to exert a bit of effort to counter the resistance, which, in turn, shifts the force to other muscle groups, particularly the ones responsible for posture. With this system, the body is forced not to slouch and use those upper body muscles instead of relying on wrist and forearm muscles to move the mouse.

Orbit actually does change the design of the mouse by turning it into a joystick. Unlike a typical joystick, however, you still have to move it across the surface, much like a mouse. The only difference is that the joystick shape keeps the arm in a more natural position to reduce stress. The touch-sensitive ring on top acts as a mouse wheel so that you don’t have to change your hand’s position or stop the movement just to use it. There is also a “flat” version that more closely resembles a traditional mouse that’s designed for gamers. 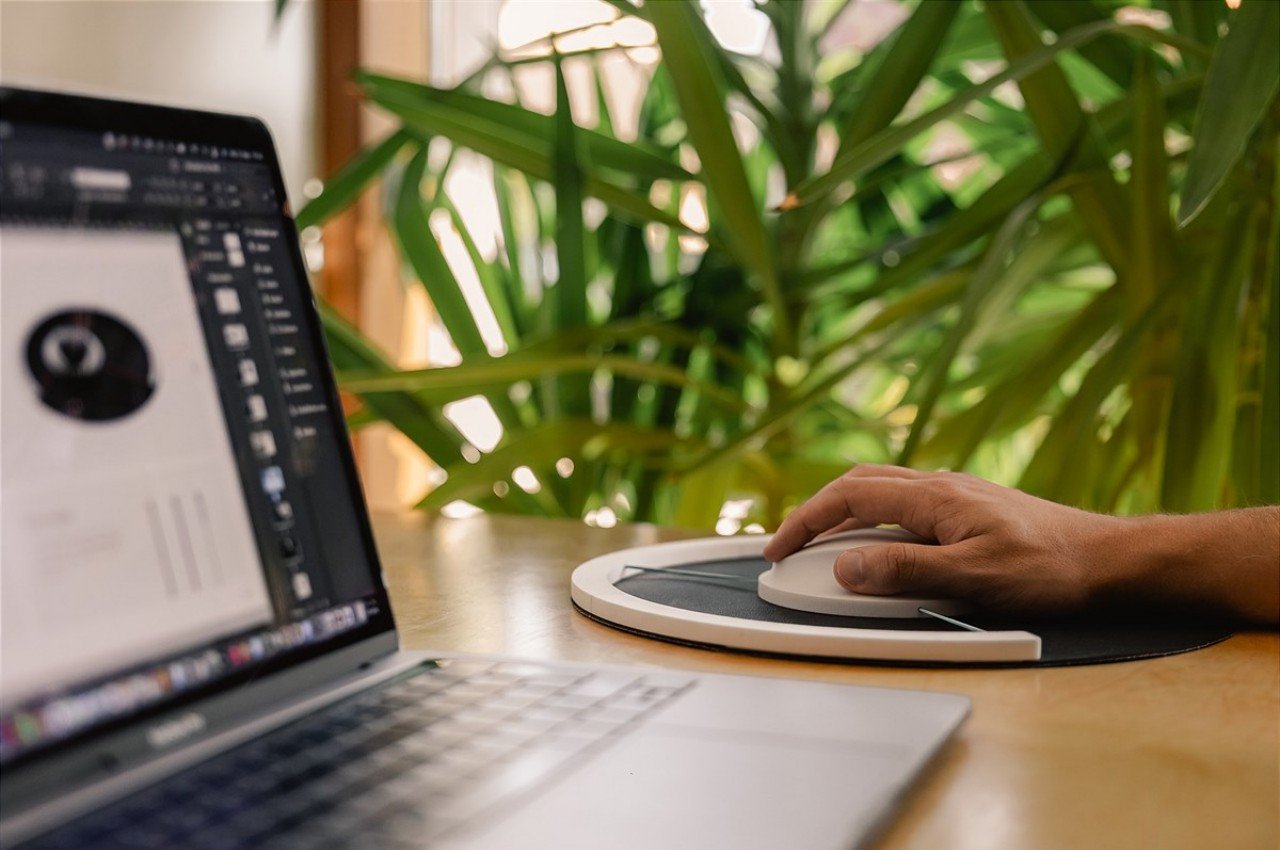 Whether it’s changing the shape of the mouse or adding some resistance, it’s encouraging to see designers challenging the status quo when it comes to this input device. It might still take some time before the industry embraces these ideas, but increasing awareness about the problems with computer mice is an important first step in changing people’s perceptions. 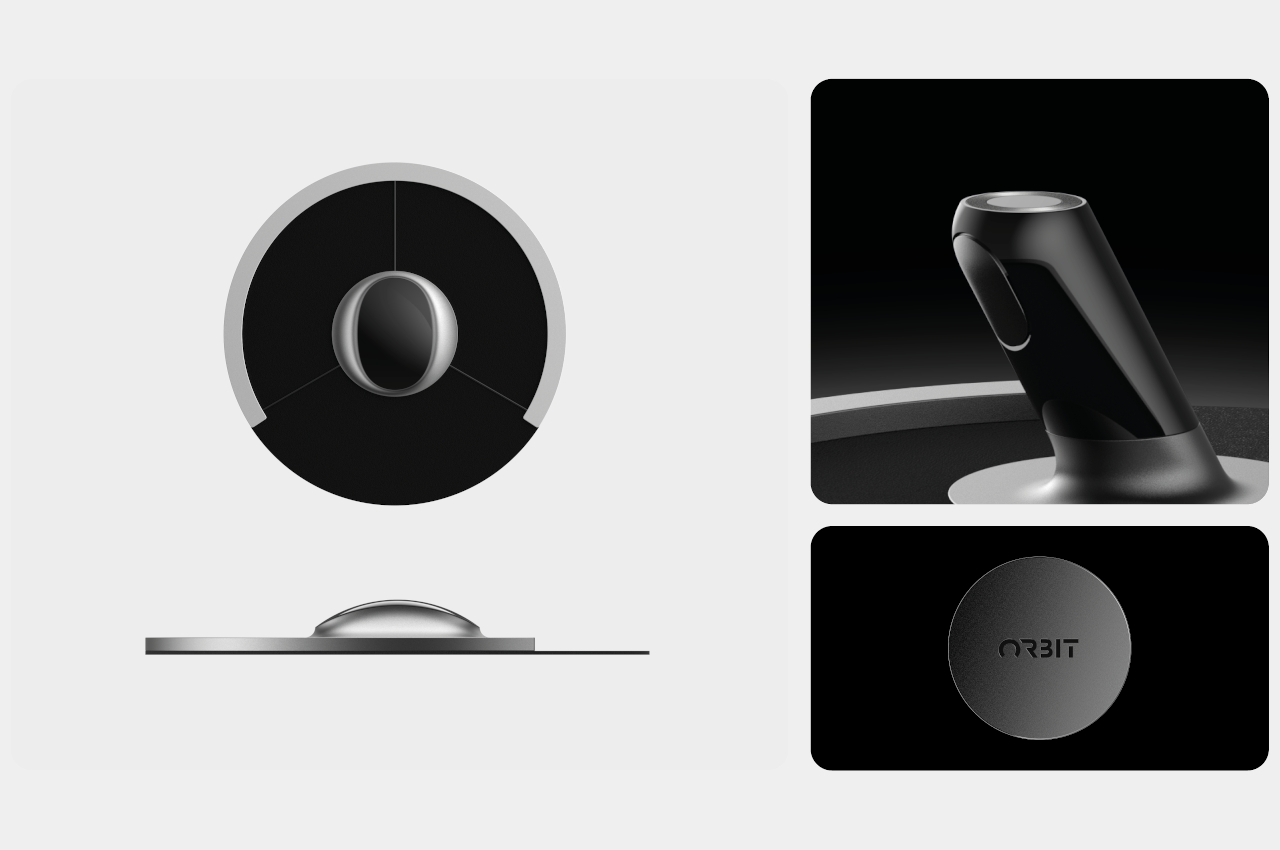 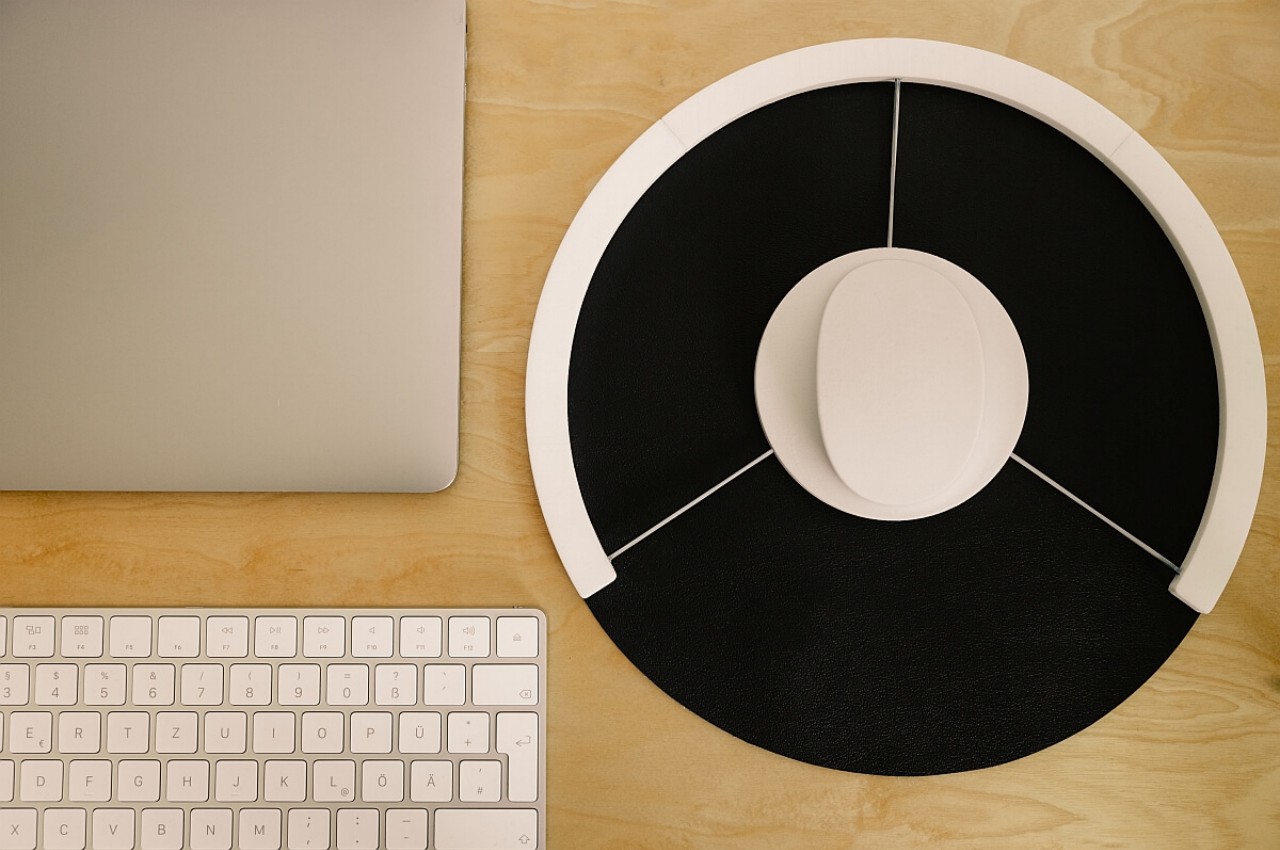 The Neckpacker 2.0 travel jacket has its own integrated neck pillow, eye-mask and iPad-sleeve

https://www.kickstarter.com/projects/neckpacker/hybrid-jacket-by-neckpacker-20 The All Black Hybrid Jacket Neckpacker 2.0 (aka Neckpacker 2.0) may look like a jacket to the untrained eye, but I’d like you to…

I’ve heard of making music, but the BOSEbuild wireless speaker takes it literally! This badboy is a hi-fi audio speaker, but it comes absolutely disassembled,…

Most cellphones have joined the touchscreen bandwagon so once in a while it tickles me pink, to come across a QWERTY concept merged with the…

A minimal smartwatch that actually helps you unplug from phone notifications!

Imagine this. You are working at your desk, when in a brief lull of productivity, you wonder, What time is it? You press a button on your…