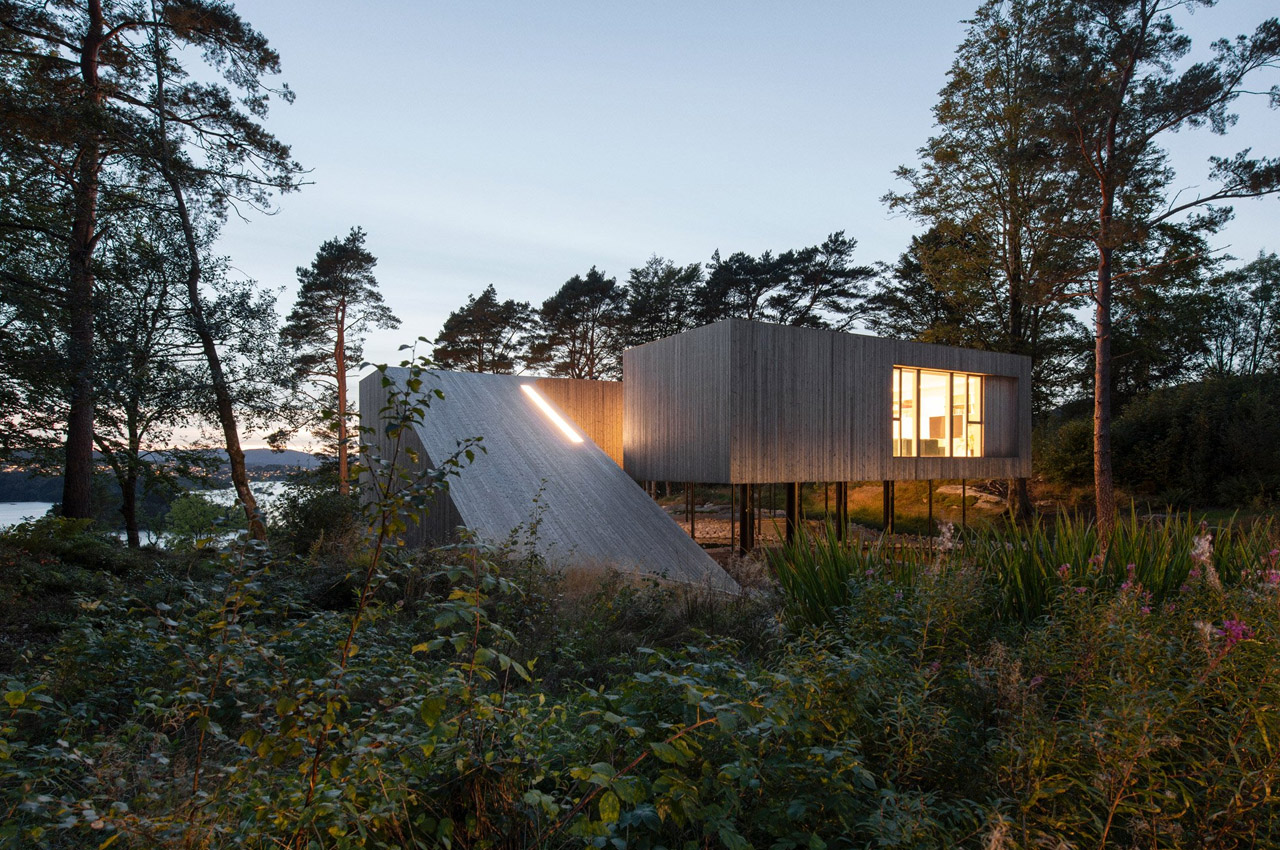 Situated on the brow of a hill, overlooking the serene waters of Lake Nordås, and almost a fifteen-minute drive from Bergen, Norway, is the mesmerizing Villa Grieg. Designed by Saunders Architecture, the beautiful wood-clad home is elevated on metal stilts, to provide those stunning views of Lake Nordås. Alexander Grieg commissioned Todd Saunders to build this ‘forever home’ for his family and him. He is a descendant of Norwegian composer, Edvard Grieg, who lived in a summer villa nearby in the 1880s. The villa was accompanied by a composer’s hut, both of which are now a part of the Edvard Grieg Museum. 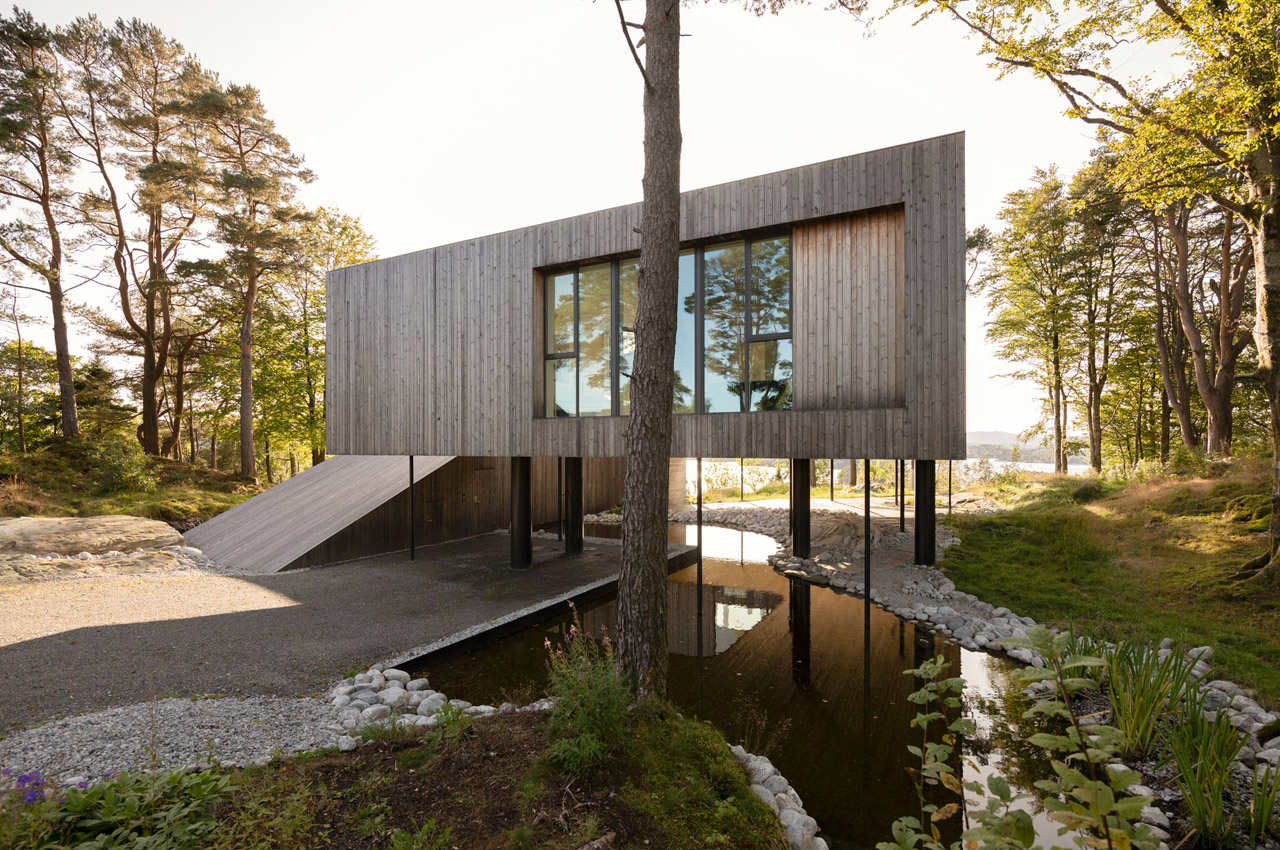 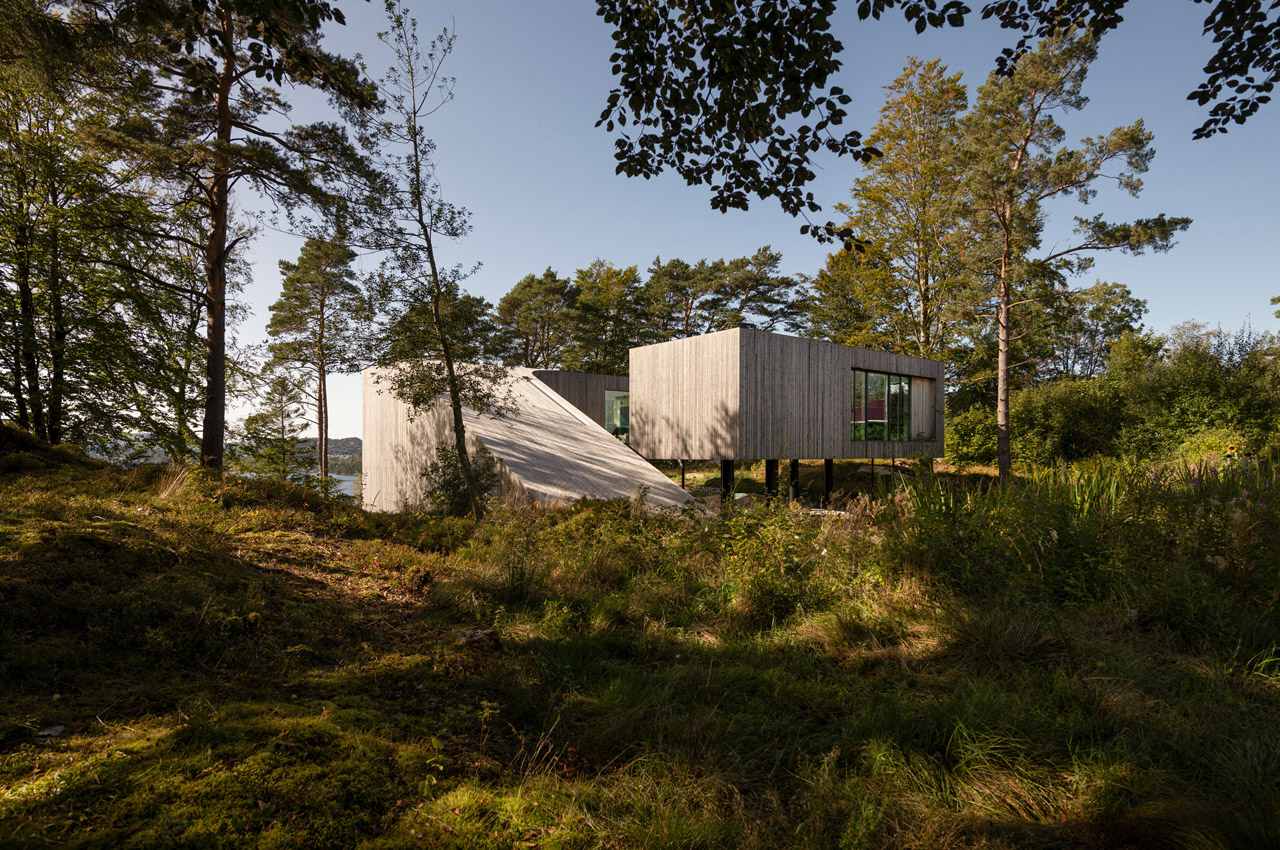 In fact, the new home has been positioned in such a manner, that it’s aligned with the historic buildings, located further up the hill.

“It’s almost a longing to have the same kind of life Edvard Grieg would have had at the time. Programmatically it’s related, as both a place to compose music and a place to live, and geographically it has the same relationship to the lake,” said Todd Saunders. 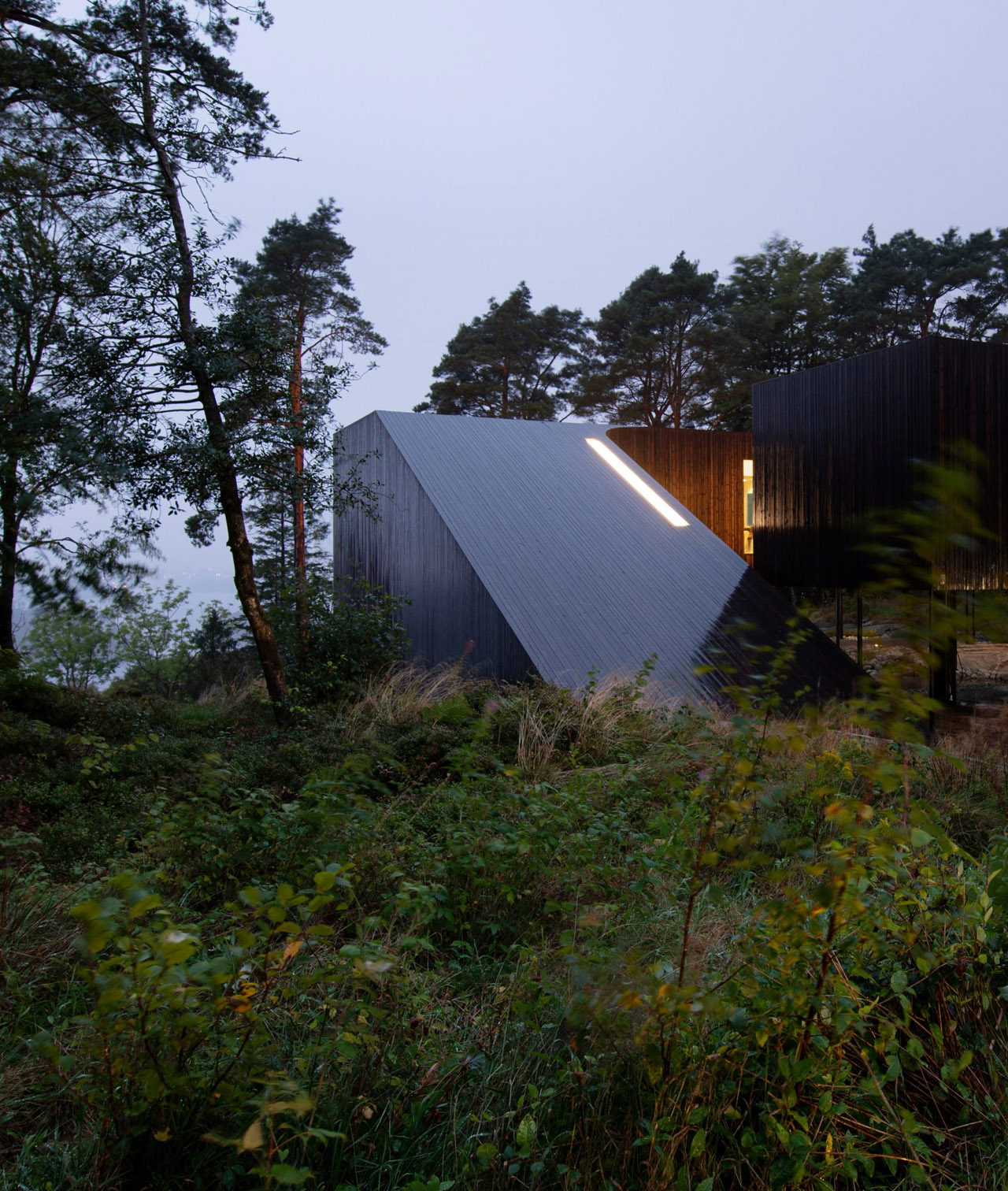 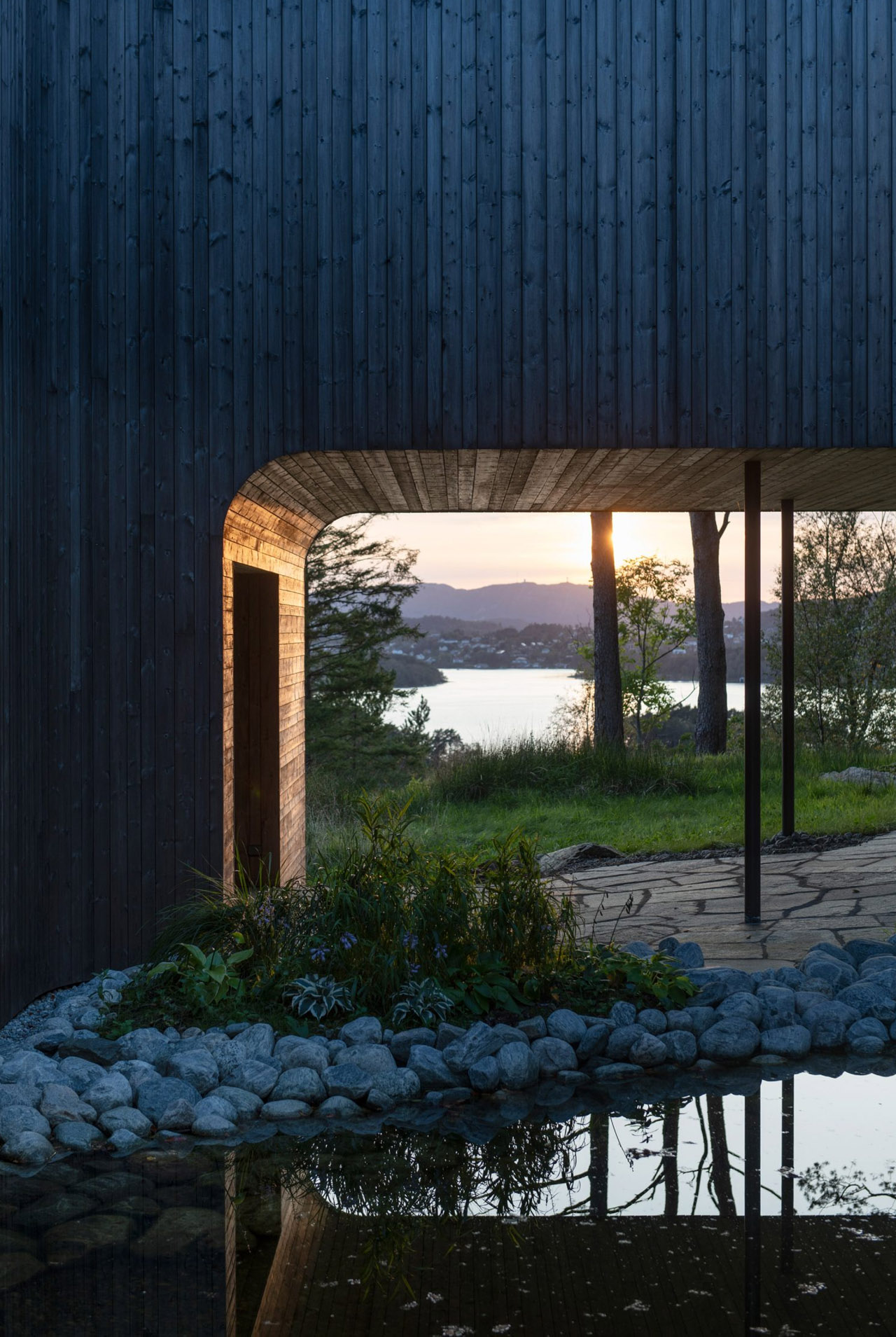 Villa Grieg is meant to be a modern live-work space, with separate sections for both realms. The home harmoniously moves upwards, from an insular music studio on the lower level to an open and spacious living space that is raised via stilts. I love how the roof of the music studio beautifully slopes upwards, rising slowly but surely from the ground, and then artfully extending into the living space. It’s almost like an inverted rainbow if rainbows were a humble beige.

“We wanted movement, almost like drawing a single line that wraps around on itself and a sculptural movement towards the sky,” Saunders said.”It’s about going from one level to another, but using the building to do it,” he concluded. 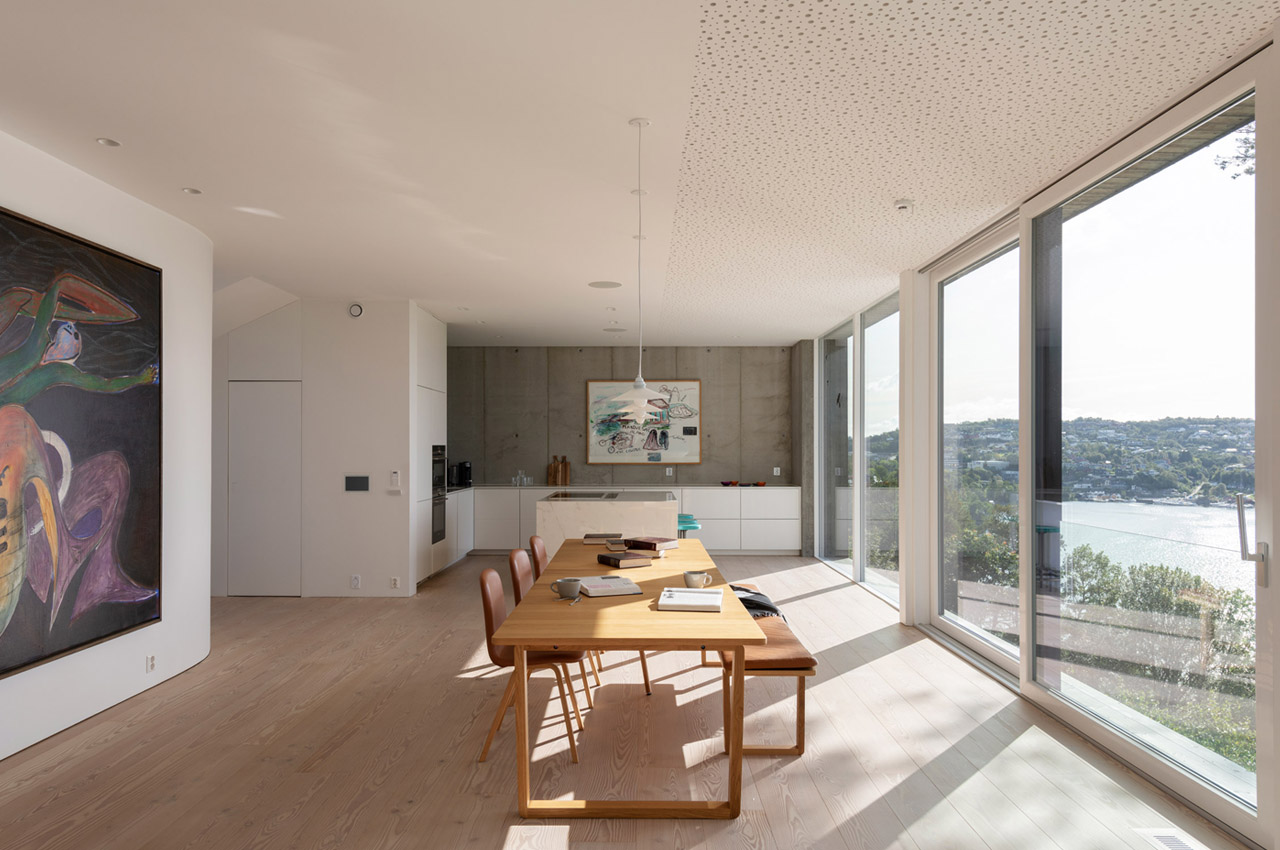 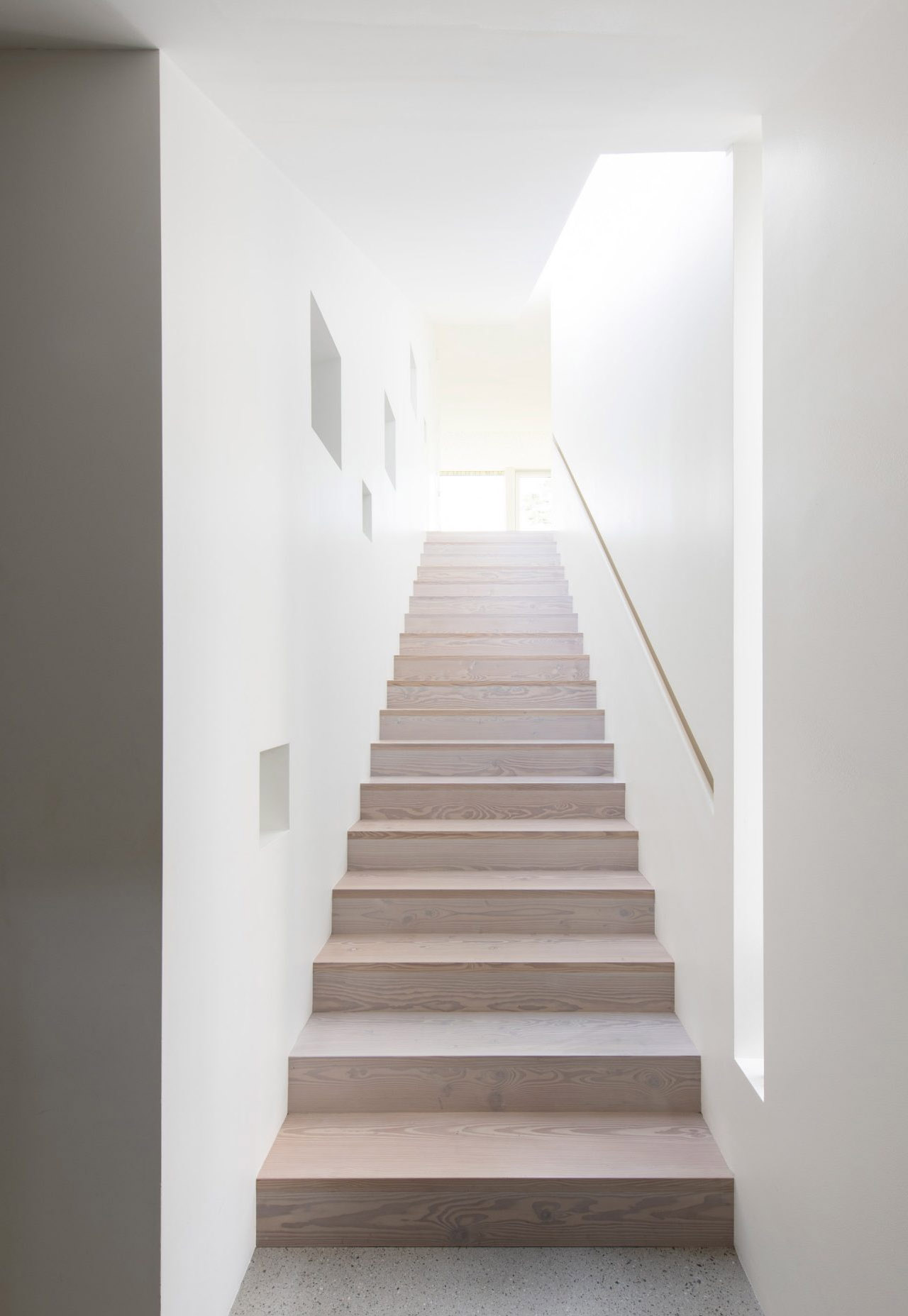 Clad in Kebony timber, the home features two bedrooms and a music studio whose sloping form holds the staircase that leads to the bedrooms and the remaining upper section. A skylight has been placed above the staircase, as well as a sliding glass door at one end of the studio. The door leads to a cozy patio space. There’s an abundance of windows in the main living area, providing the home with a free-flowing aesthetic. Massive windows in the bedroom and the living, dining, and kitchen room provide views of the lake, as well as the landscape. 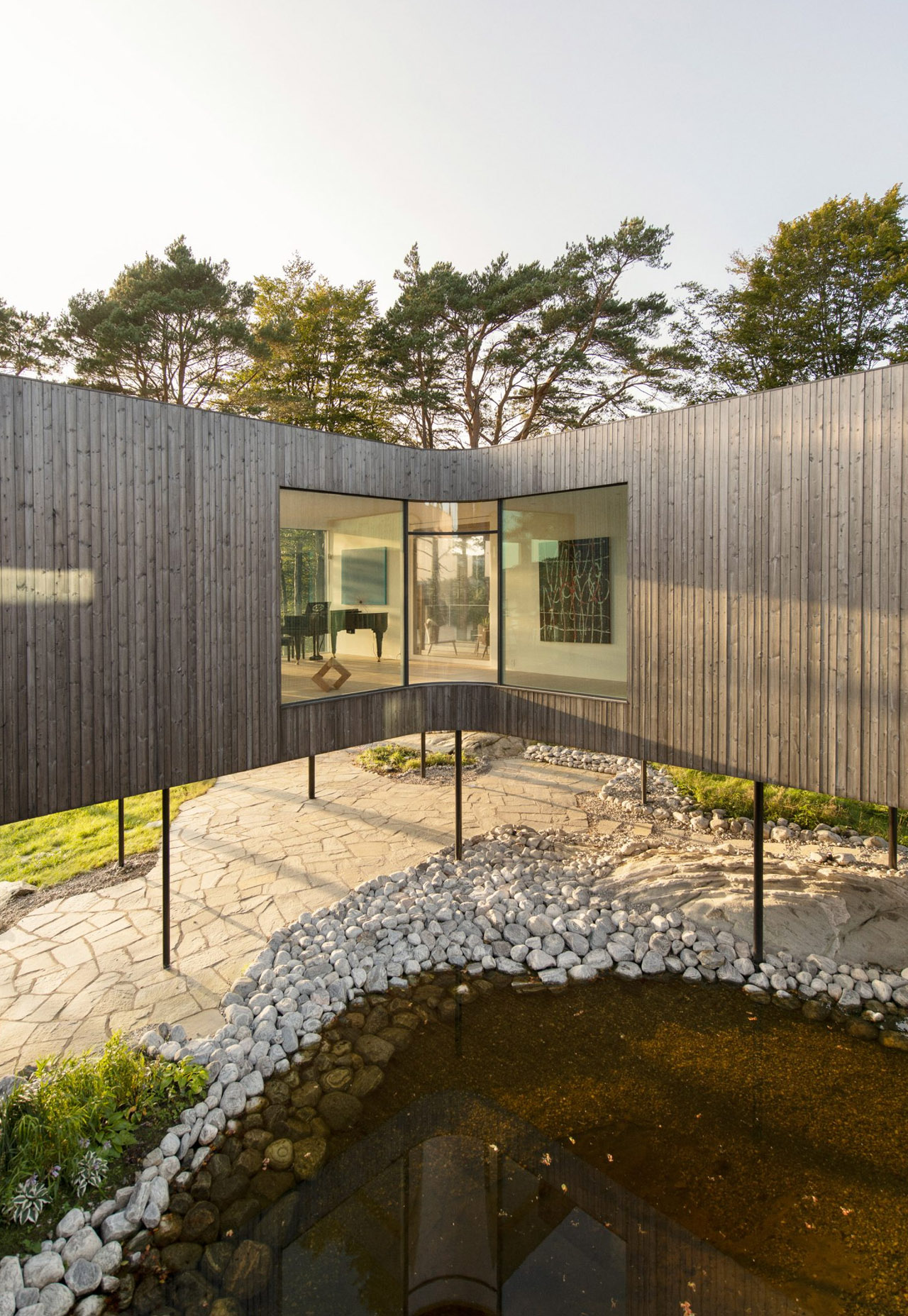 An amazing trait of the Kebony timber is that it will slowly weather with time, and turn grey, allowing the home to further merge with its exquisite surroundings. The architect wanted it to “take up the patina of the natural landscape”. He said it looks almost like a rock popping out of the landscape. The sculptural piece of architecture is a labor of love by Todd Saunders and Alexander Grieg, and this comes through beautifully in the home. 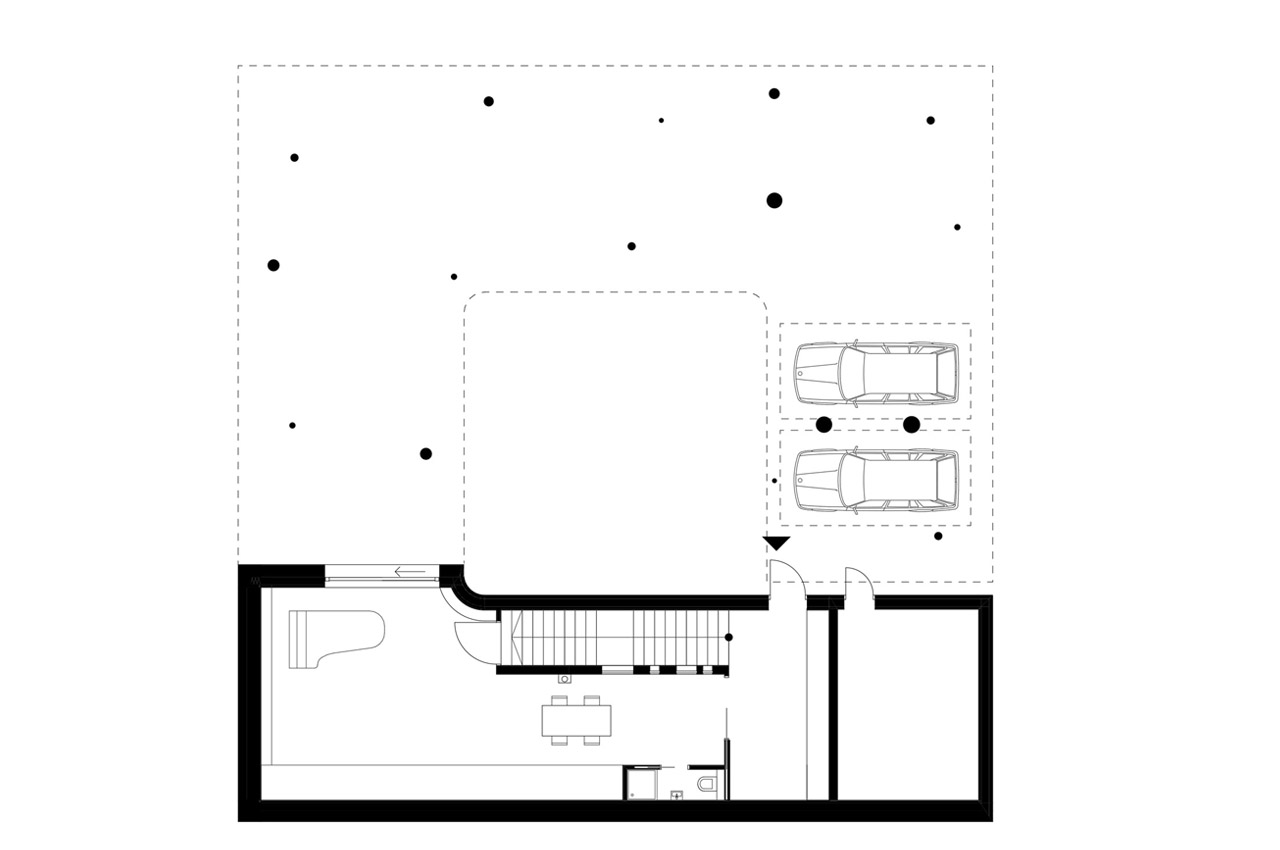 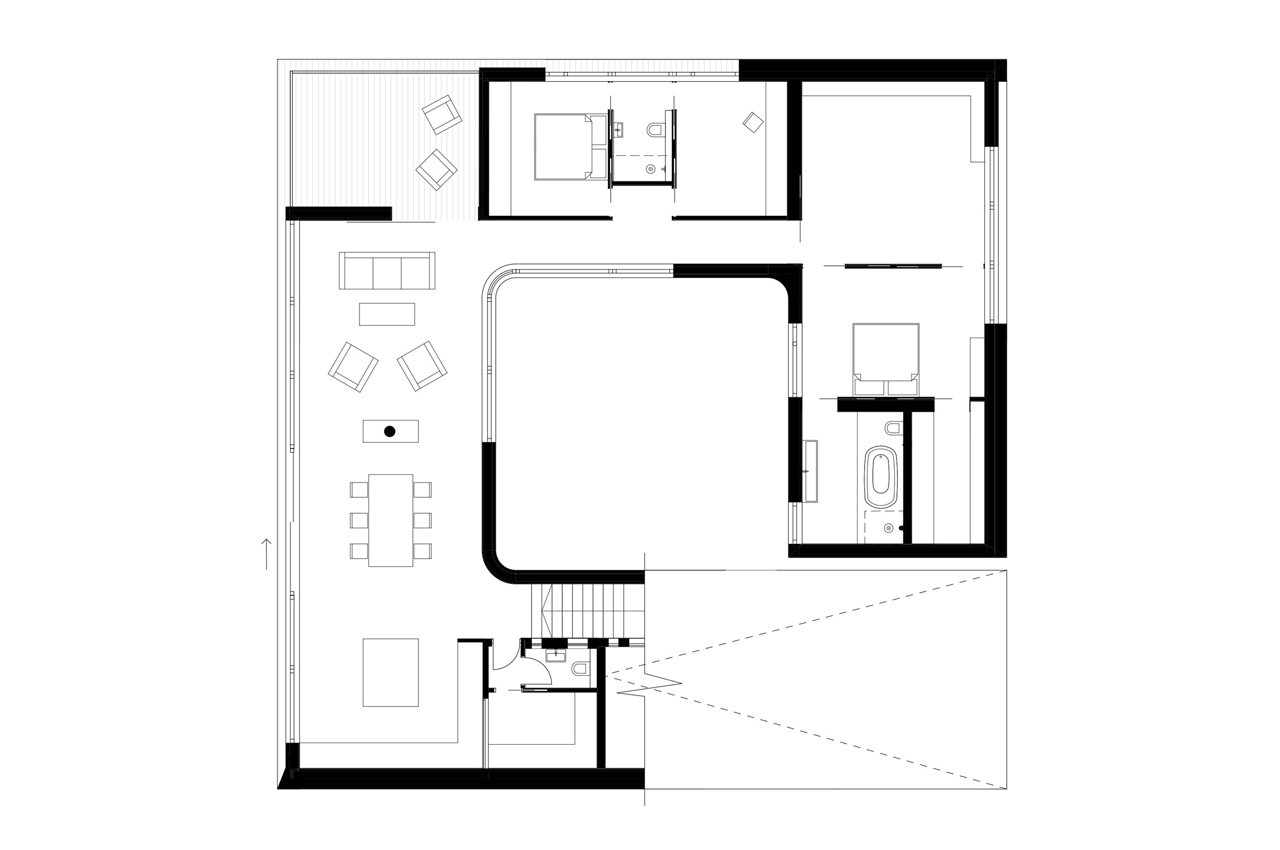 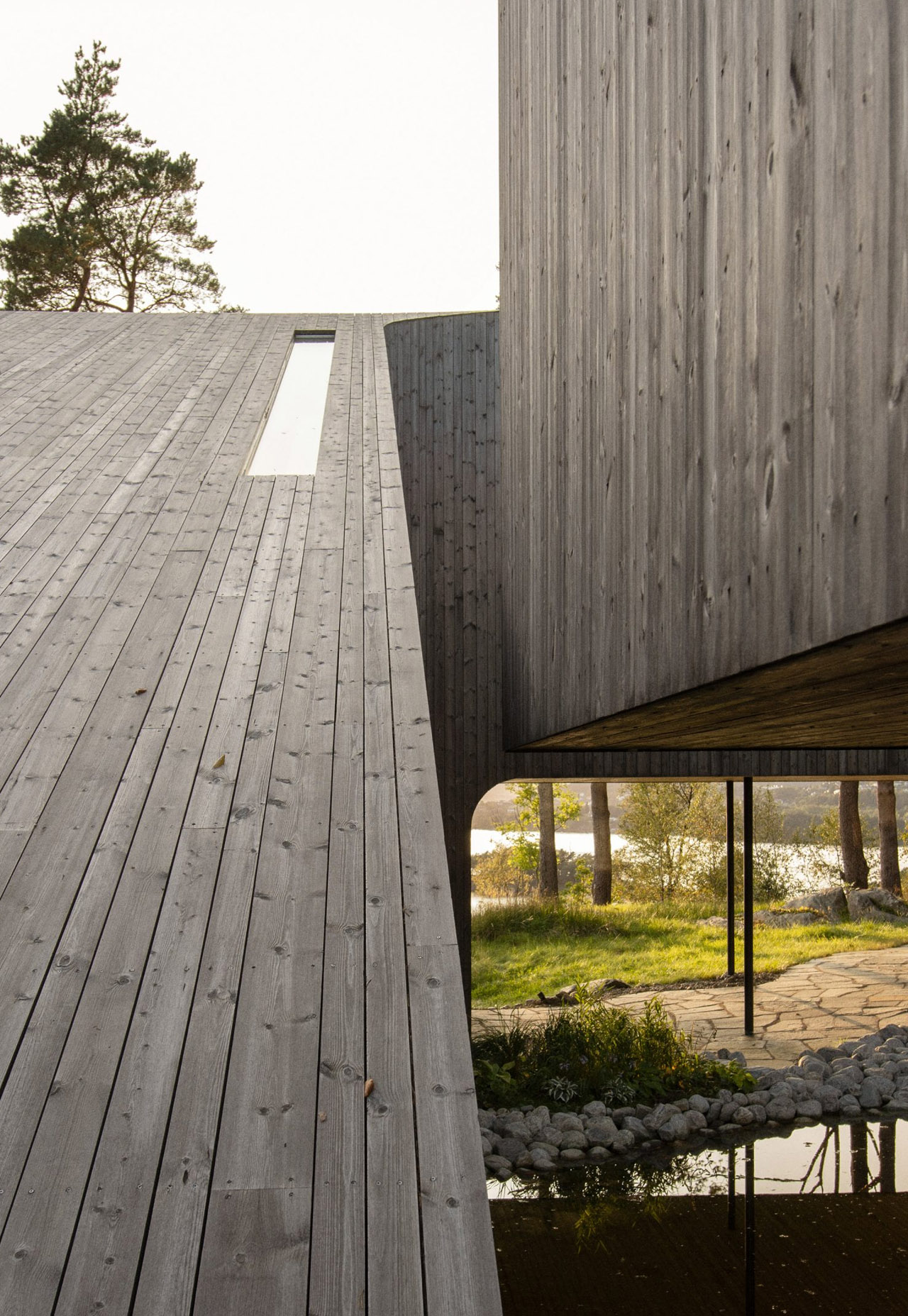 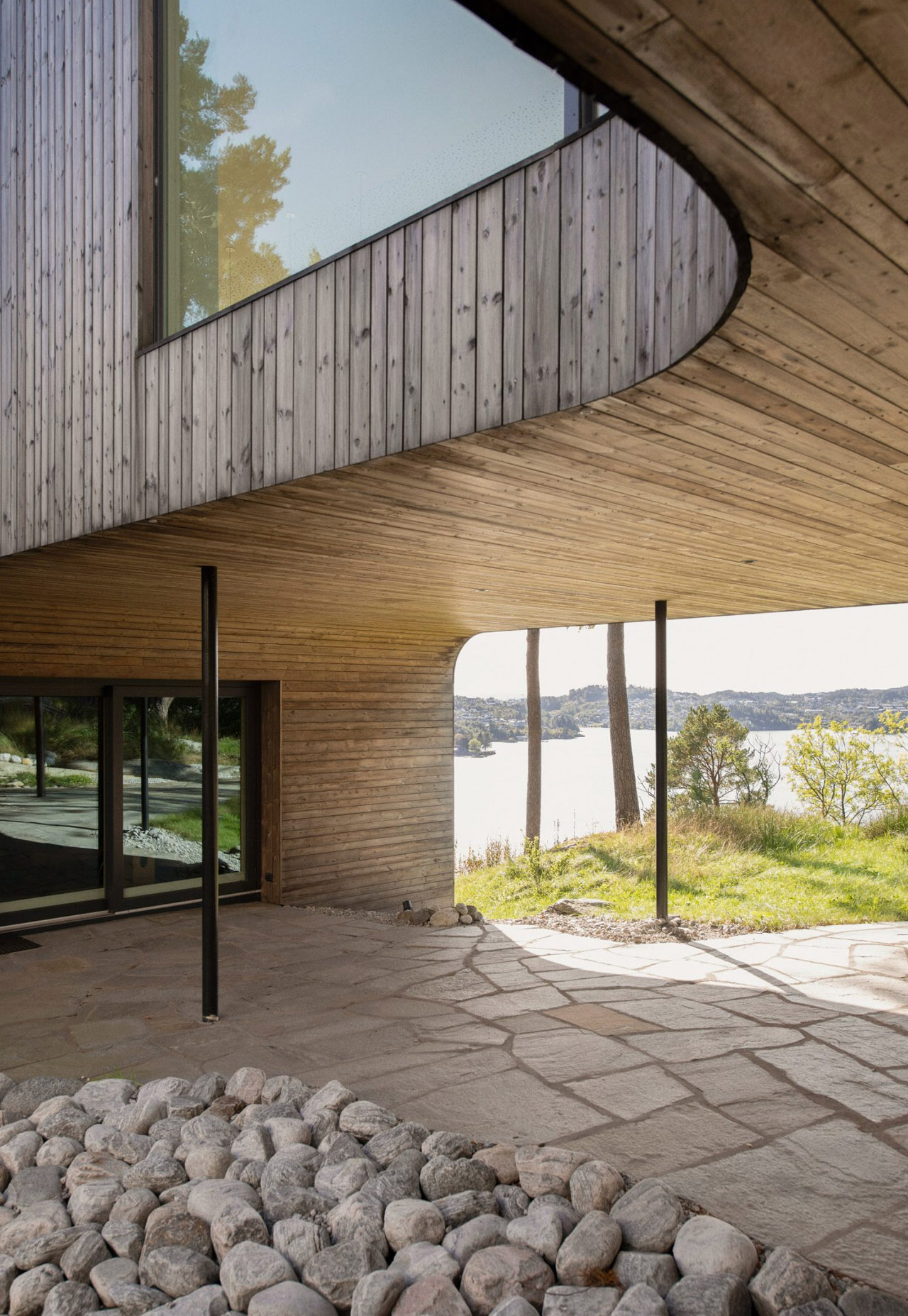 Kenji Ido’s Tamatsu House in Osaka, Japan is wedged in an urban, mixed-used area of small factories and office buildings that coexist in lines of…

This prefabricated, off-grid home features an upside-down layout to take in all of the outdoor views!

It is a Football Stadium Inside a Volcano

Yeah. That’s what’s up. It’s built on top of the mountain. Or at least it’s made to seem as though it must be. Plush-ed out…

Architecture that takes inspiration from shipwrecks

Namibia’s Skeleton Coast has earned its name for being exactly that. The sands on the northwestern coastline of the country are littered with skeletons of…