Have you ever opened TikTok or Instagram, closed it, and just within a second later, opened it again? Social media addiction is involuntary, and you’ll be surprised to know that a lot of the behaviors on social media happen incredibly unconsciously. You might like a photo without actually observing it, or double tap on a TikTok or IG reel just out of habit without really registering the fact. It’s muscle memory… and the Unpluq Tag hopes to break it. The Unpluq Tag is a physical gatekeeper to your digital world – if you’re the kind of person (like I am) who checks IG 30-40 times a day, or spends hours on TikTok without actually realizing it, that’s where the Unpluq Tag comes in. Designed to be an NFC tag that sits around your keychain or somewhere on your table, the Unpluq App + Tag blocks addictive non-productive apps of your choice on your phone and only allows you to open them by actually tapping the NFC tag on your phone. How is it any different from manually locking certain apps on your phone and typing a keyword to unlock them? Well, there are a few clever differences… 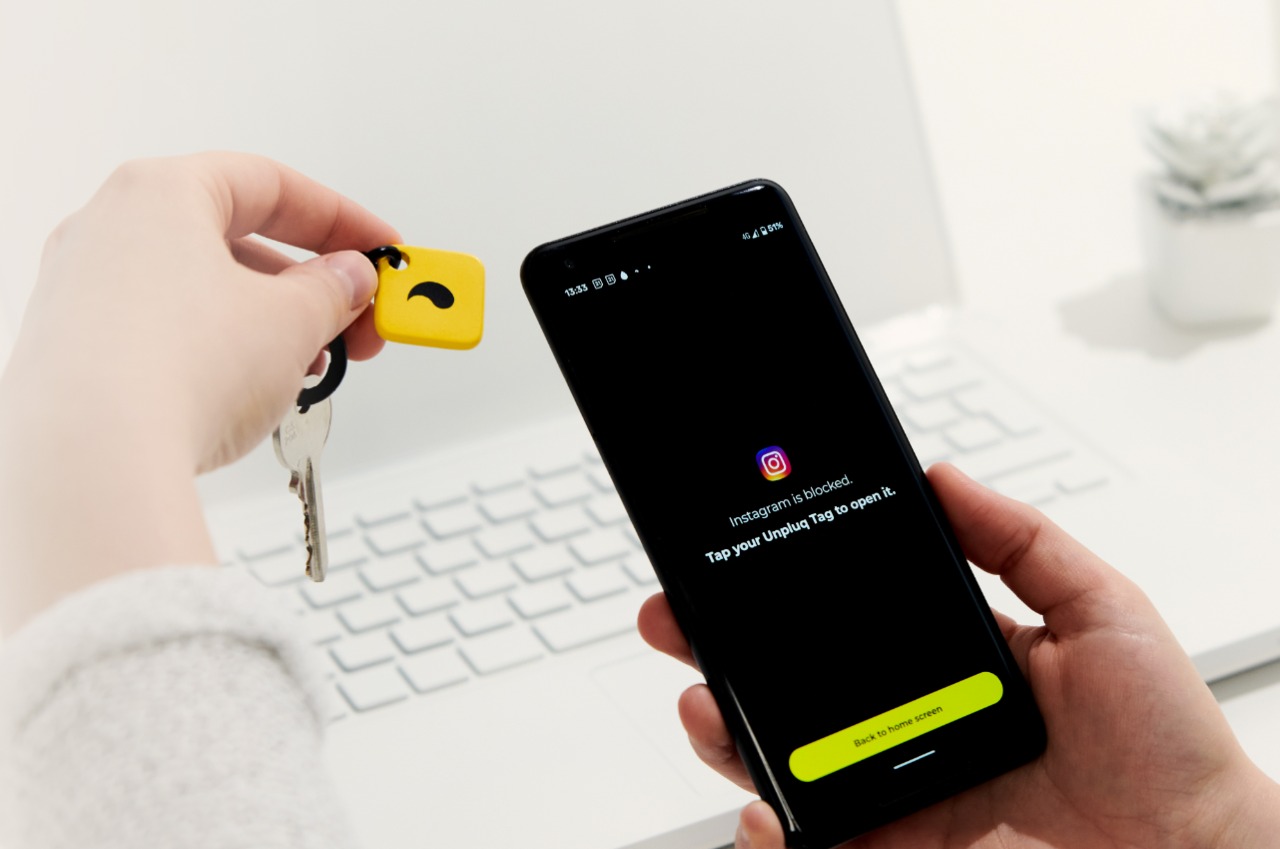 The Unpluq Tag blocks non-essential apps and hides unimportant notifications, keeping distractions away while you work, play, meditate, or meet friends/family. However, since everyone benefits from periodic breaks and rewards after being productive, the Unpluq Tag gives you short bursts of access to your favorite apps, simply by tapping the NFC tag on your phone. The tag works almost like a hall pass, giving you a brief window of time to enjoy before you get back to work. When you physically tap the tag, it becomes a conscious decision as opposed to when people normally open social media unconsciously or subconsciously. This agency over your own decisions breaks one important aspect of the unhealthy cycle of social media addiction. 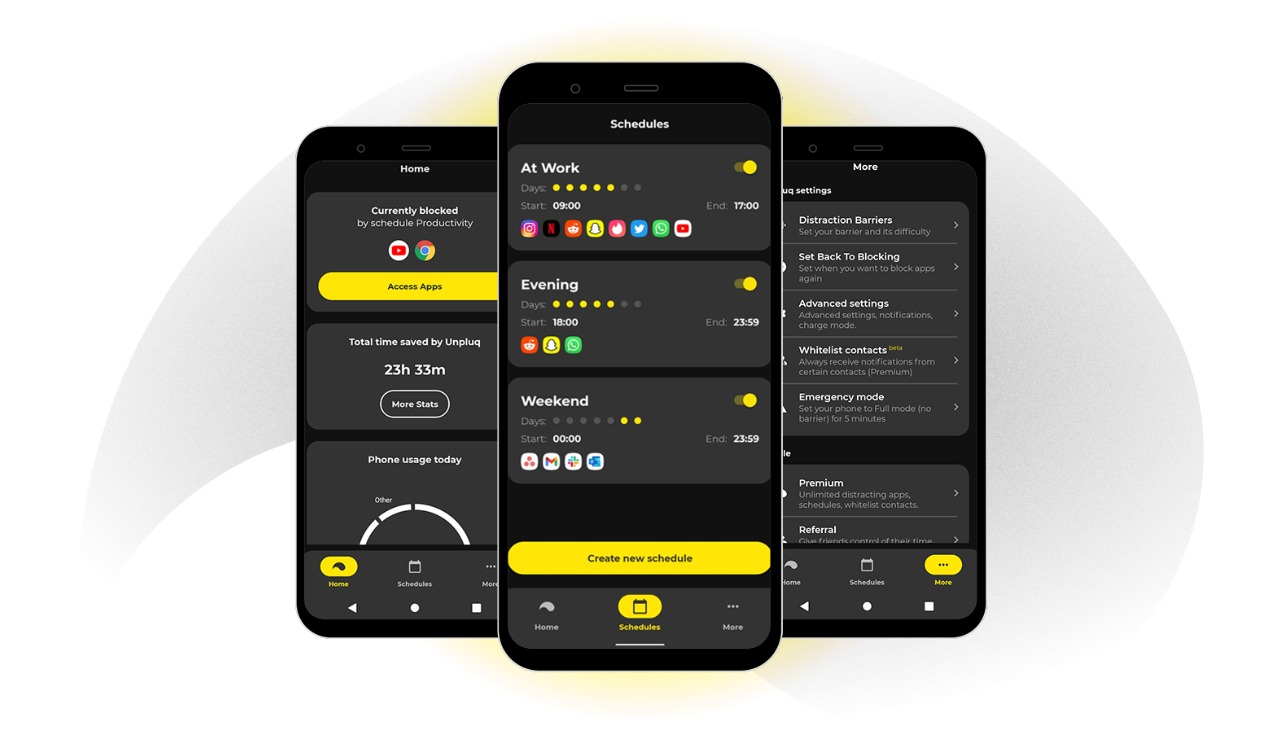 Decide which Apps distract you, and at what time.

Wait, how is this any different from just locking and unlocking your apps? Sure, you can manually lock apps that open only when you input a passcode. However, that’s more of an anti-snooping feature than a self-discipline feature… and typing out a passcode to unlock an app can become intuitive over time, basically defeating the purpose of having you off social media while working. Android and iOS even have ‘focus modes’ that allow you to automatically snooze non-essential notifications while working, but those features don’t block the apps. What the Unpluq Tag does is bundle them together into one singular device that actively makes sure you don’t slip into old patterns of behavior. The best part? You can hide your Unpluq Tag or give it to a friend or family member so that you aren’t tempted to unlock Instagram in the middle of working or studying. There’s no way to cheat your way out of the system. 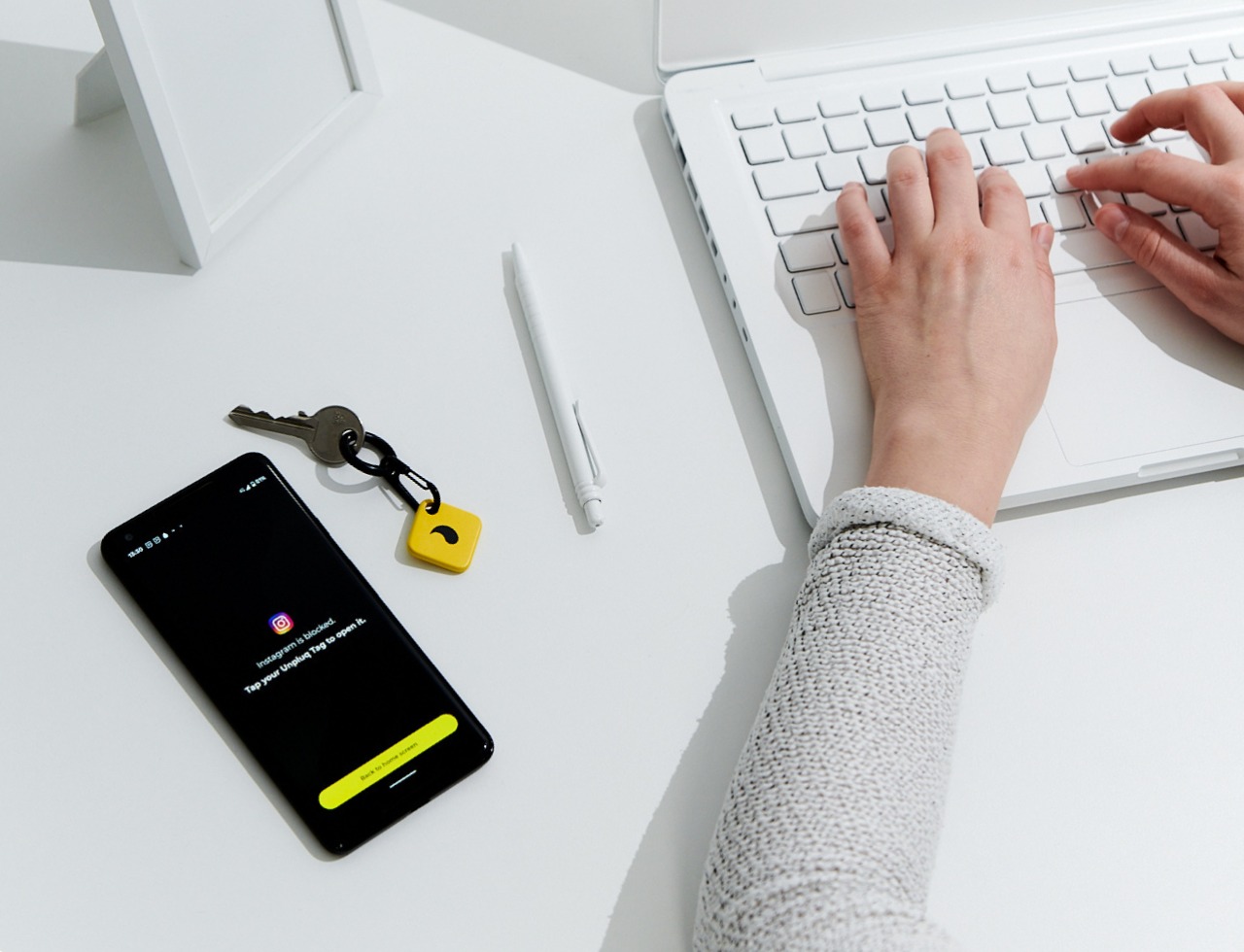 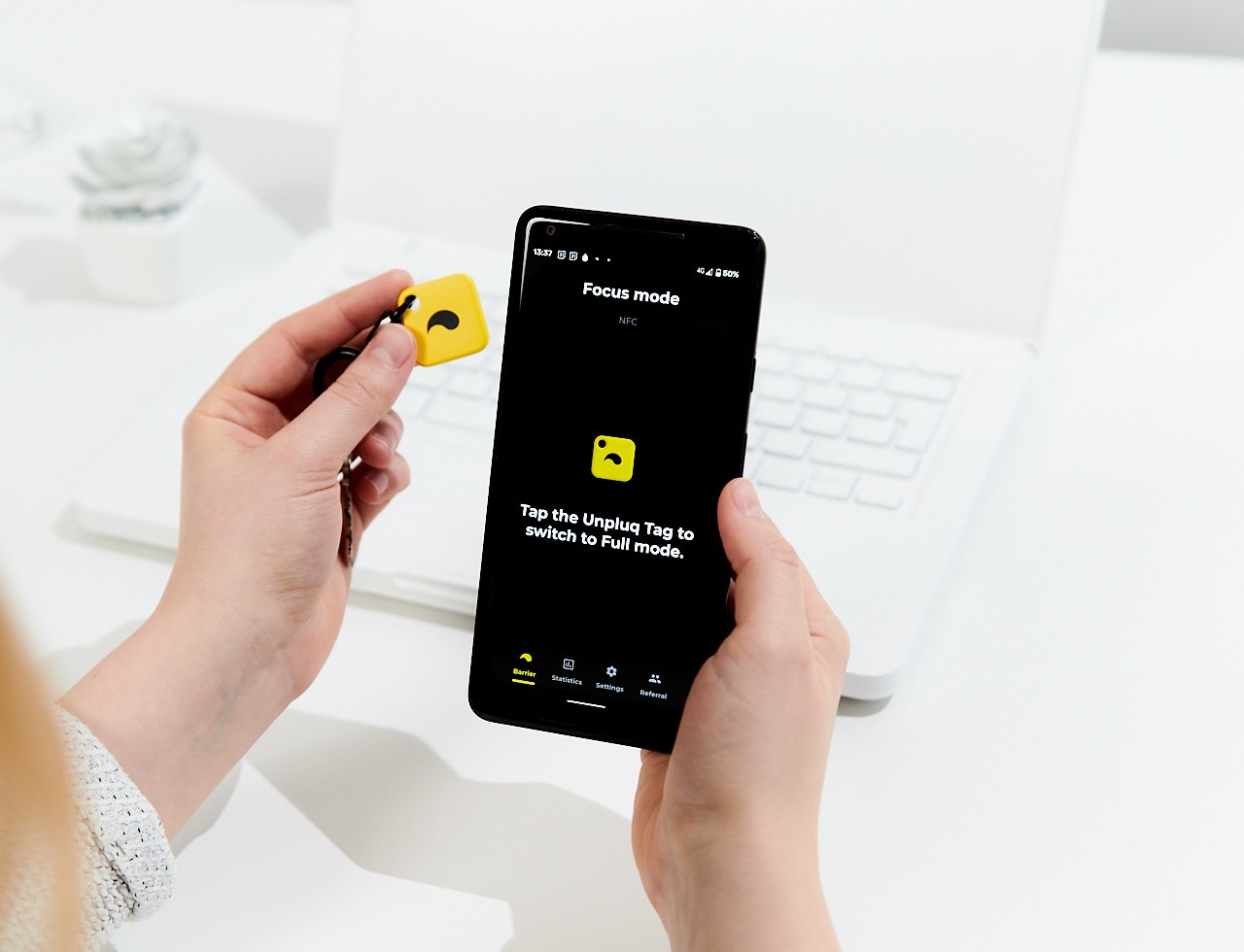 The Unpluq team’s pitch isn’t new – the company also launched the Unpluq Key in 2020, which was an actual hardware device that you had to plug into your phone. In its newer avatar, the Unpluq Tag is smaller and doesn’t have a port. It works on NFC (near field communication) technology and the interaction is reduced to a simple tap. The device works in tandem with the Unpluq app which simultaneously blocks access to distracting apps and snoozes their notifications. You can set your apps to get locked whenever you want, and even program a schedule, so your distractions routinely disappear on their own during work hours. The Unpluq app can automatically detect which apps need blocking, although it also gives you the ability to pick and choose what apps you want to be restricted while you’re busy. 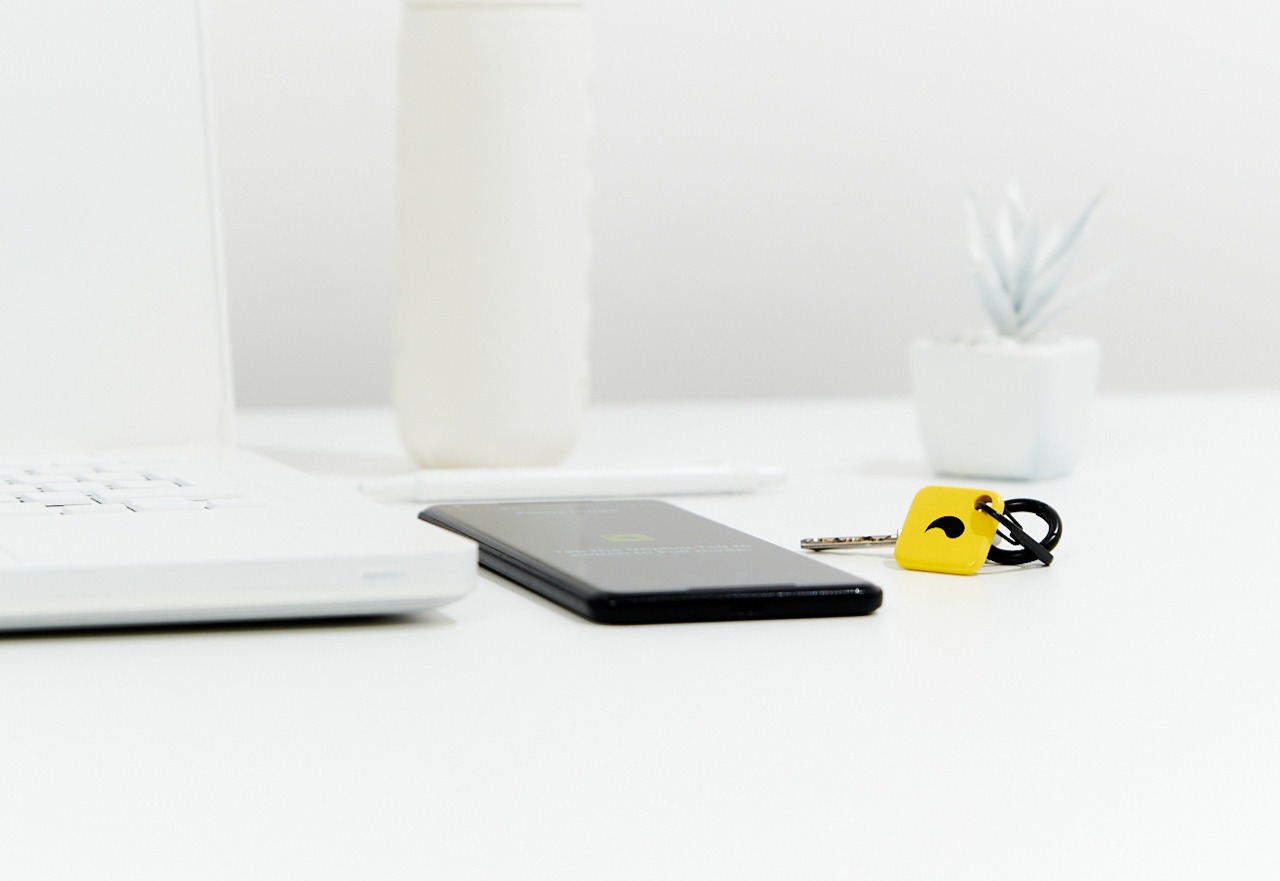 Roughly the size and shape (and color) of a Cheez-It cracker, the Unpluq Tag is designed to sit around your keychain, although you can pin it to a softboard, hook it to your backpack, or attach it to your lanyard. For $44, you can grab yourself a single Unpluq Tag, which also comes with a 1-year free subscription to the Unpluq app, which also gives you stats at the end of the day to show you how much time you saved. Go ahead, block all distractions, and unlock your mind’s true potential!

3D Print From Your Desktop

I’ll admit I love my Vizio TV and I’m partial to the brand. It’s easily the most simple to operate, thinnest, and most affordable I…

Gadget Roundup: Award-winning tech and products from the A’ Design Awards 2020

Inspired by the Ferrari Berlinetta, this hair-raising EV is the peak of the past + present automotive design language