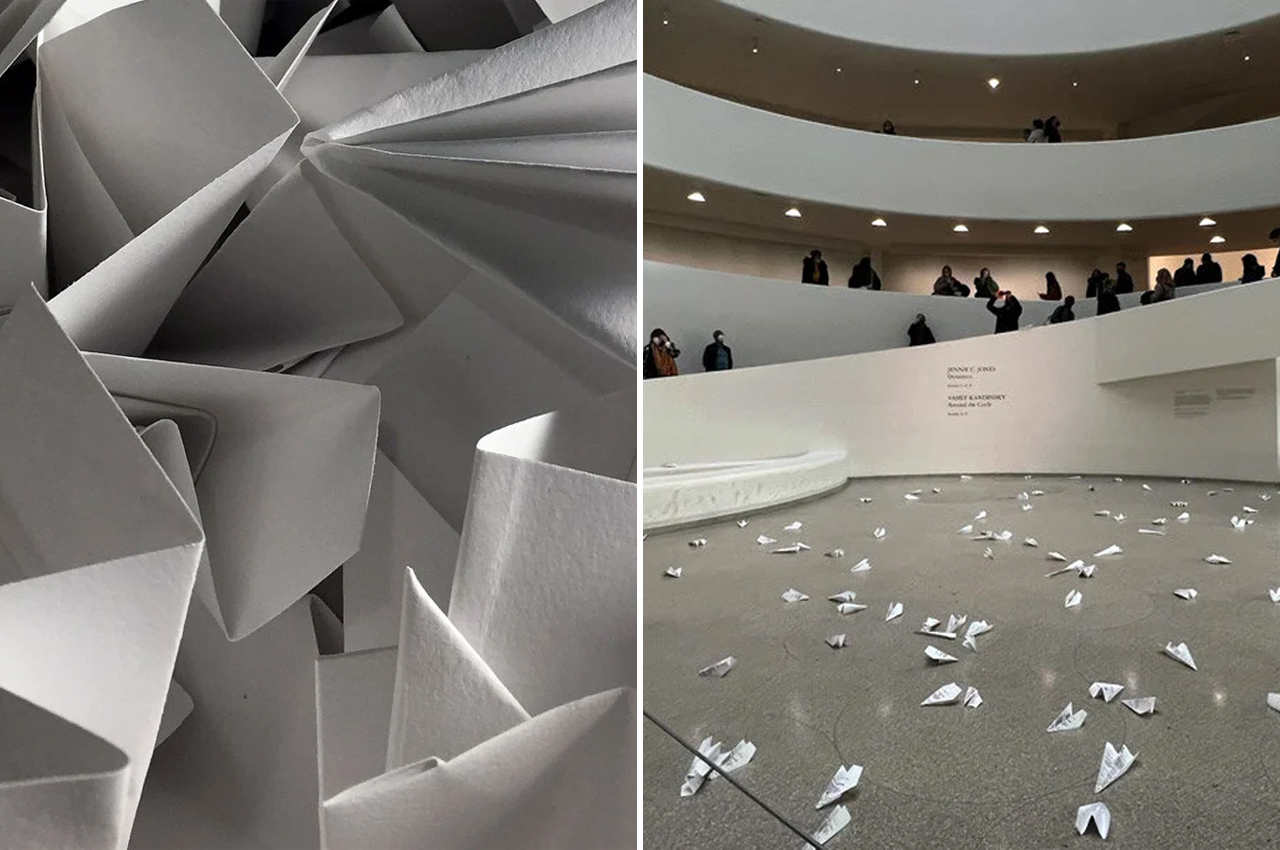 On March 5, on a Saturday afternoon, a group of 15 artists and activists launched 350 paper planes from the top floor of The Guggenheim calling for a no-fly zone over Ukraine.

Deployed during peak visiting hours, the 350 paper planes floated from the museum’s top floor to the ground, between floors brimming with people. As Russian forces invaded Ukraine, President Volodymyr Zelensky of Ukraine had requested NATO to enforce a no-fly zone over Ukraine, but the request was rejected by NATO for fear of bringing more countries into the conflict since they would have to shoot down any Russian aircraft flying over Ukraine. 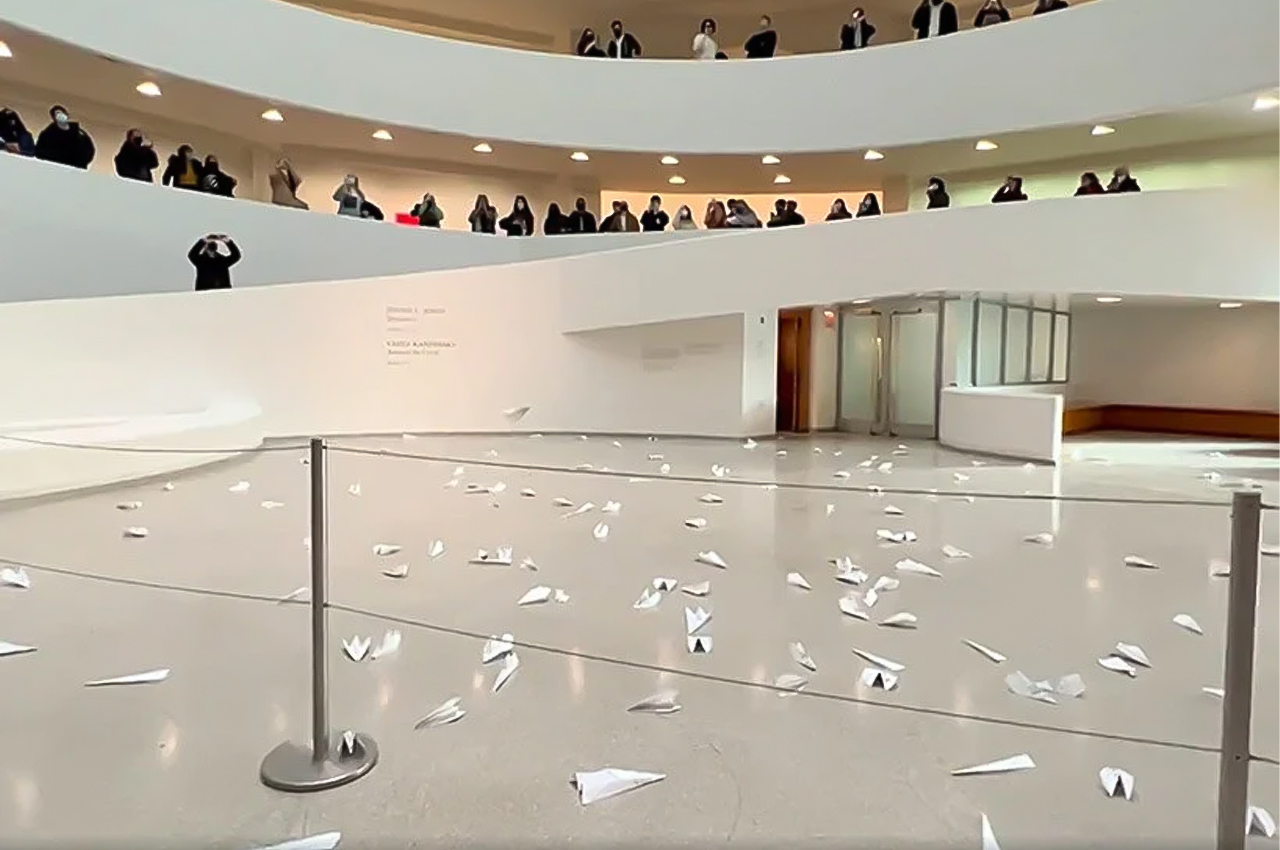 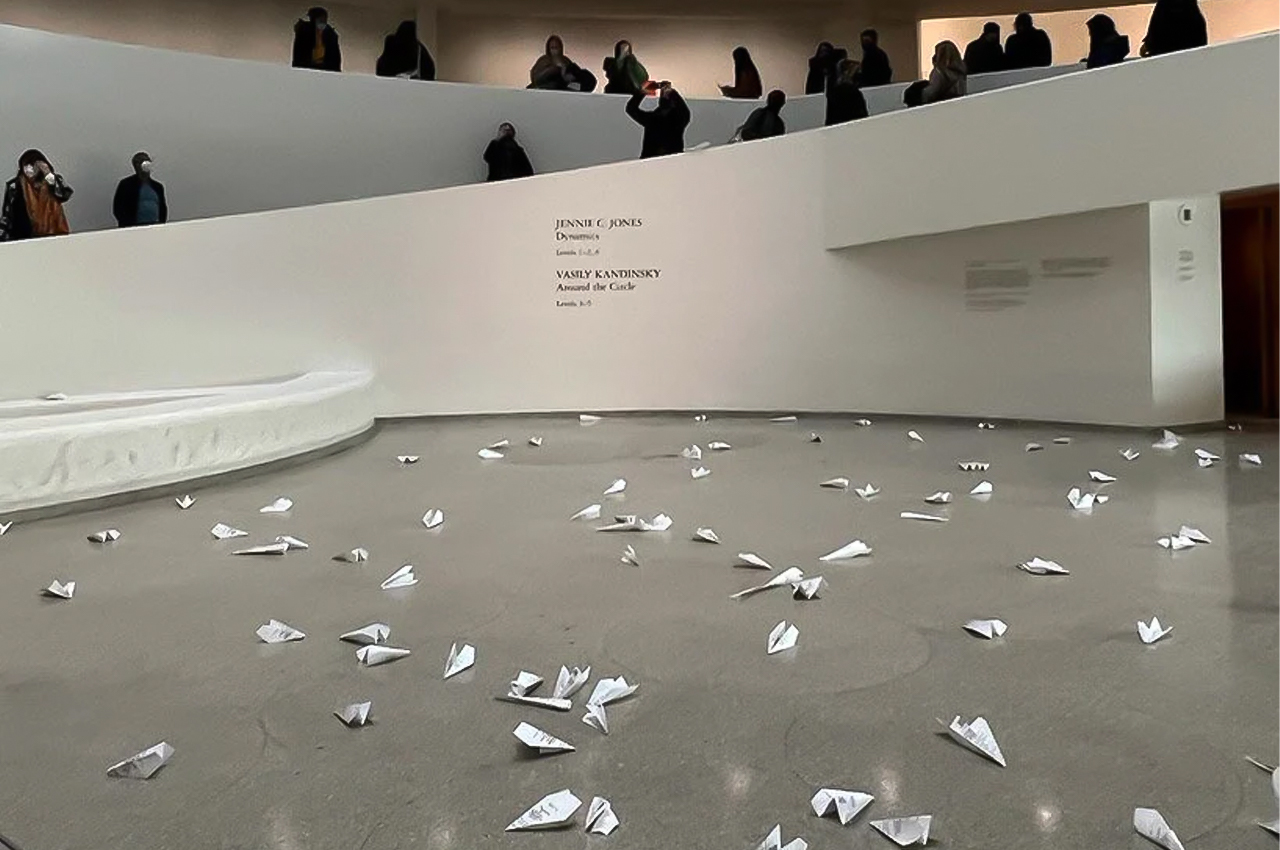 So far NATO, led by the United States, has announced it would not intervene by air or land, rejecting the possibility of taking on Russian forces. The paper planes that flew through the Guggenheim had a clear message for citizens of the world, 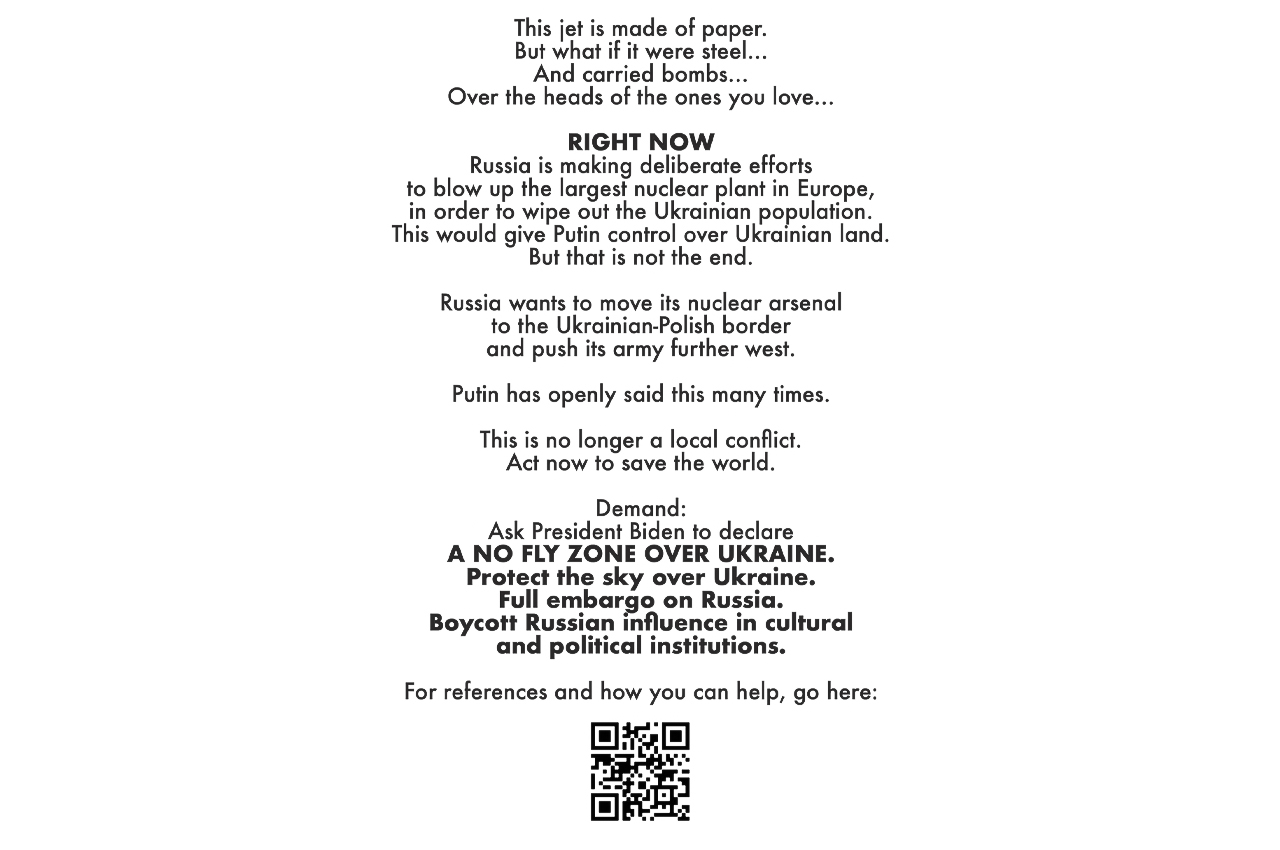 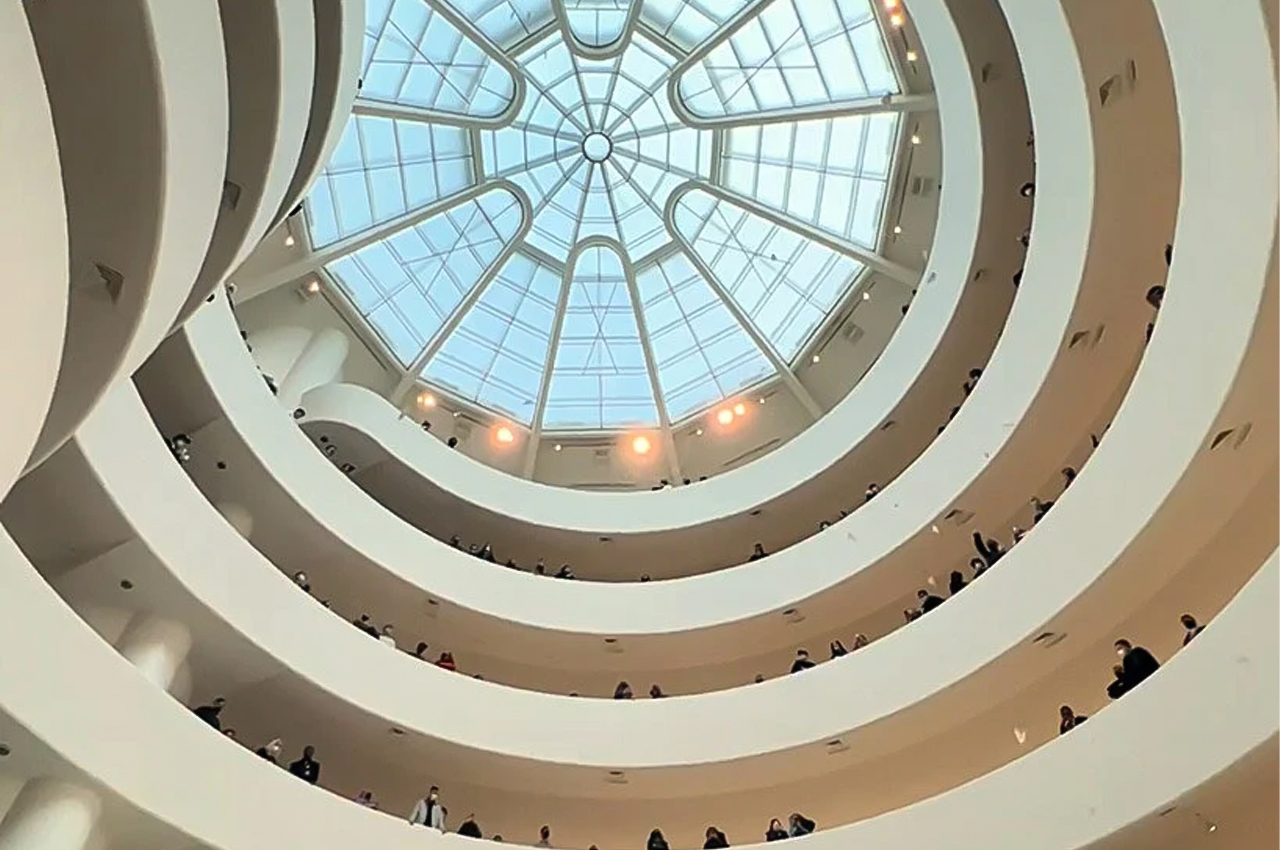 It reads, “This jet is made of paper. But what if it were steel and carried bombs over the heads of the ones you love? Right now, Russia is making deliberate efforts to blow up the largest nuclear plant in Europe in order to wipe out the Ukrainian population. This would give Putin control over Ukrainian land. But that is not the end. Russia wants to move its nuclear arsenal to the Ukrainian-Polish border and push its army further west. Putin has openly said this many times. This is no longer a local conflict. Act now to save the world. Ask president Biden to declare a no-fly zone over Ukraine. Protect the sky over Ukraine. Full embargo on Russia. Boycott Russian influence in cultural and political institutions.” 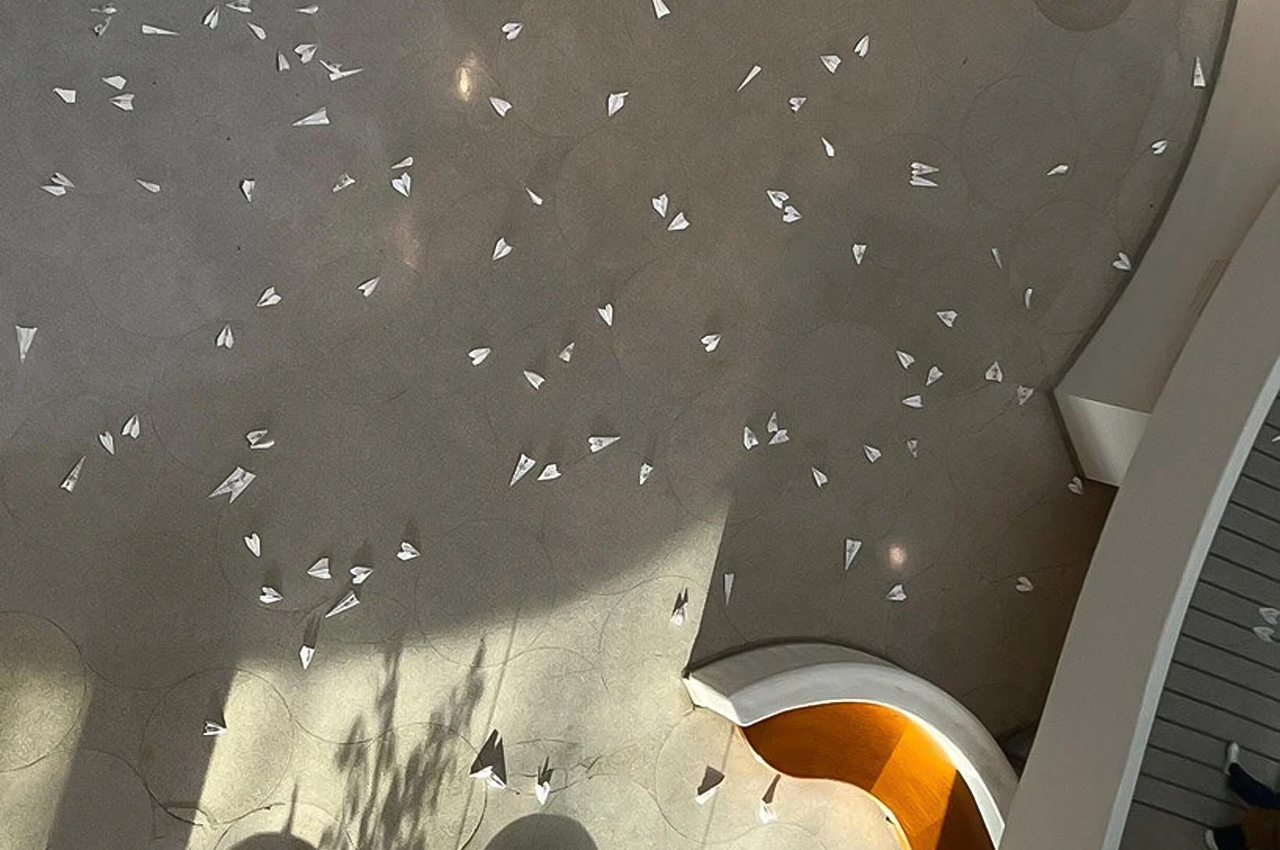 Upon entry to The Guggenheim, museum security guards barred two artists and activists from entering who were given the option to enter without the bag of flyers in tow. Artists Anton Varga, Bea Fremderman, V Pan, and Volk Lika were among the 15 organizers behind the act.

Picture this, you are at a festival that is bustling with stalls – you are trying different food, shopping for little items, taking pictures of…

Meet the 10 ‘Fresh Taiwan’ designers that are whipping up a storm at NY NOW Summer 2019!

I find myself increasingly being asked which countries are on my watch-list for design growth and discourse, and the one answer I keep going back…