Think of it as the alternative to the security guard at every doorstep who manually scans your temperature and dispenses sanitizer as you enter an establishment.

Some would claim that the Igiene is a dystopic device, others would agree that it’s a device that’s merely responding to the needs of the world right now. Nevertheless, the Igiene merely aims at streamlining healthy behavior in a way that’s easy for us to follow and implement. The small, sleek device can be mounted on a wall or placed on a tabletop, and uses a slew of sensors to detect your palm, capture your body temperature, and spray sanitizer on your hand. Touted as a ‘new age sanitizer dispenser’, Igiene’s built-in AI can detect the shape of your palm, capture your body temperature (while accounting for the weather outside), and dispense gel directly onto your palm by tracking its location, preventing sanitizer wastage. It also gives you a tabular view of all temperature readings, and can help track footfall during peak hours. Sounds a little too fancy? Well, that’s because Igiene’s features are more targeted towards establishments like offices, malls, museums, and other large public spaces than your average household. 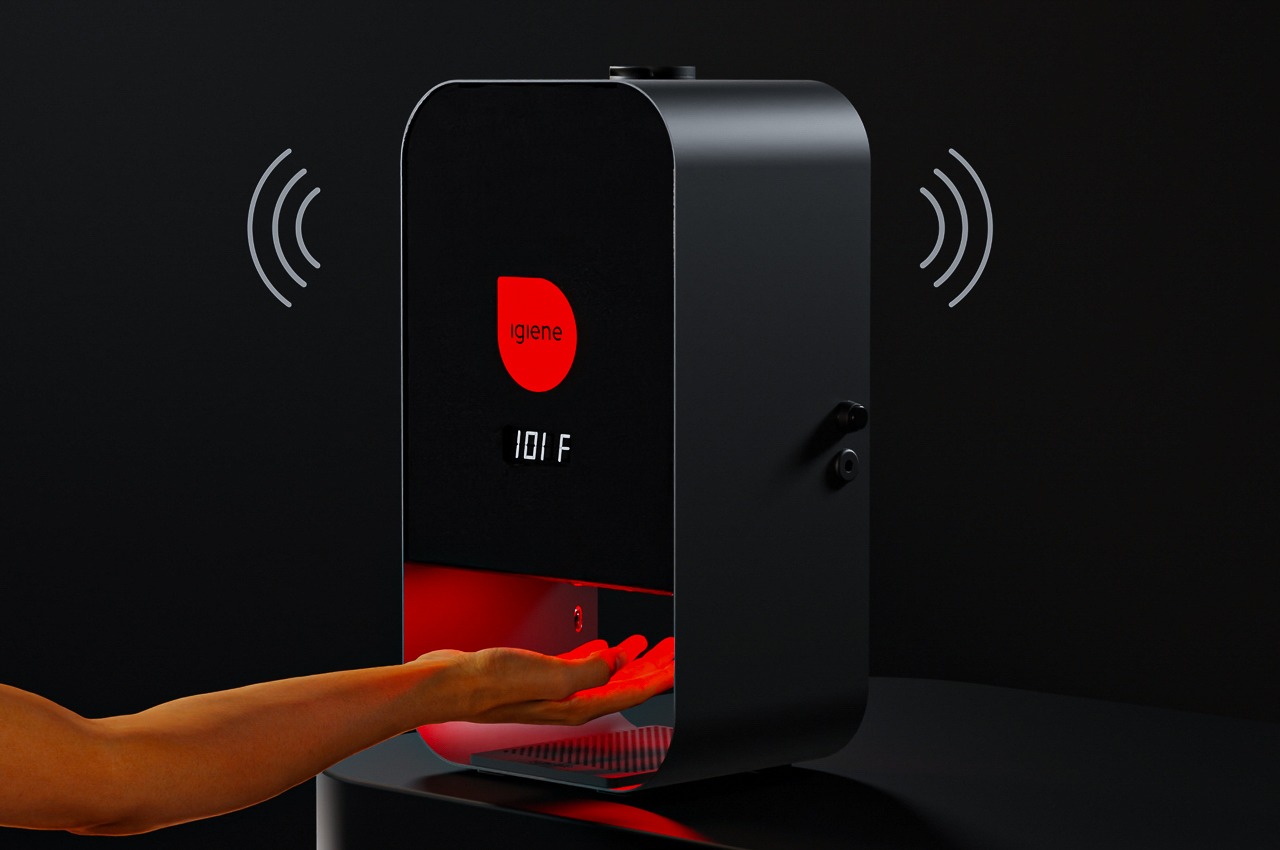 With design cues that definitely remind me of the first-generation Mac Pro, the Igiene is a cuboidal gizmo with a hollow base that’s indicative of where to place your hand. A screen on the front displays a welcome message, and once your hand gets placed in the appropriate spot, Igiene reads your body temperature and shines either a red light and a buzzer if it detects a candidate who could potentially have a fever, or shines a green light and dispenses on your some sanitizer, effectively giving you the go-ahead to enter any premises. 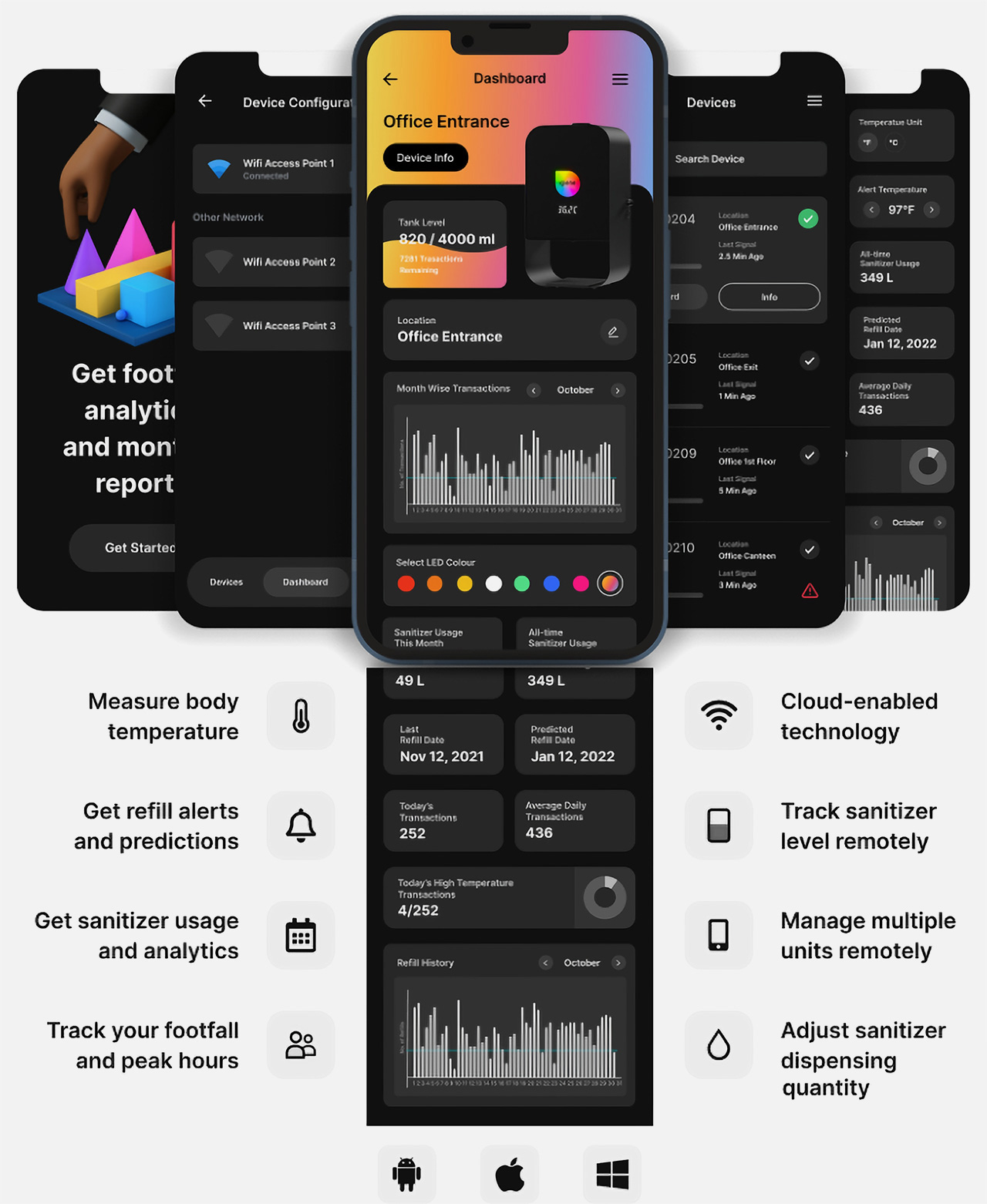 The Igiene device has two different branches of users – firstly, the customers/visitors/patrons who get their hands sanitized on the device, and secondly, the people who actually buy and install Igiene devices in their premises. For the latter, Igiene makes the entire process of health and safety streamlined and data-driven. A companion Igiene app lets you manage multiple devices together in a single dashboard and even individually or collectively set the amount of sanitizer you want sprayed in one use (you can choose to have anywhere between 10ml and 20ml sprayed at a time). The app also lets you set your temperature checking units (°C or °F) and the temperature threshold that you want your Igiene to alert you based on. The app lets you check the sanitizer levels on your individual Igiene devices, and even sends you alerts when you’re running low on sanitizer, letting you fill the tank with a sanitizer of your choice. (Igiene works with all major sanitizer brands on the market).

The final frontier where Igiene really proves to be useful is in the way it collects data. Individual devices track usage frequency based on time of the day and of the year, giving you a comprehensive reading of footfall, sanitizer consumption, hotspots (which areas are frequented the most), and average temperature readings of your patrons. Igiene can account for the weather outside and adjust temperature readings accordingly (your body’s basal temperature changes based on whether it’s hot or cold outside). All these readings are compiled in an easy-to-digest set of reports that can be pretty valuable when it comes to planning and accounting for overall public safety.

Igiene is available in 3 sizes with varying tank capacities – 1.5L being the smallest, then 4L, and finally the largest 9L size. It runs on a 5V DC power input and needs to be plugged in to run. The Igiene starts at a super early bird price of $99 for the Mini (1.5L) and deliveries begin in March 2022.

Although these hand prosthetics are as conceptual as Bruce Wayne himself, I could totally see him wearing an all-black version of these! Or giving them…

A Handyman’s Tool Belt is the inspiration for this storage-equipped chair design!

We spend a lot of our time either working on chairs or lazing out on them, so it helps when things are within reach wherever…

The Future of Trash Technology!

Why is replacing the trash bag after you empty the garbage SO annoying?! All that unfolding, flapping it open and securing it sometimes takes even…

Wake Up Smarter Each Day

So, the ZZZAM is a smart, connected alarm clock that tracks your sleeping activity. The data that it collects helps in setting the wakeup time,…