Sure, we’re years away from getting our own JARVIS, but the Eilik is a step in that direction. With a personality that’s less like Stark’s AI and more like Baby Groot, the little robot stands obediently on your desk, letting you interact with it through voice commands and touch. Modeled with an aesthetic that’s highly reminiscent of Eve from Wall-E, the tiny bot responds, reacts, and engages back with you, giving you a little tabletop companion to make your day just a wee bit stress-free. 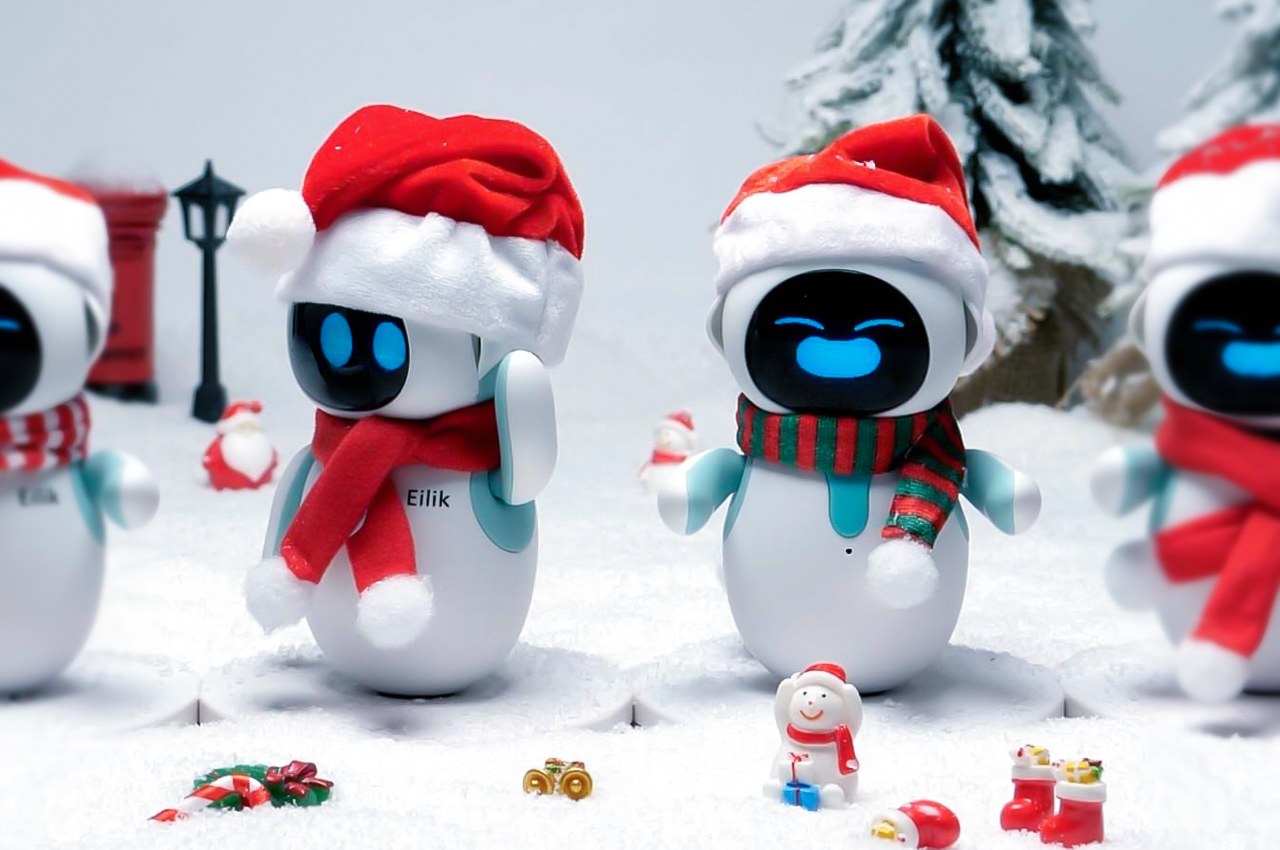 Instead of being a robot that prides itself on intelligence, efficiency, and accuracy, Eilik highlights an area that most robots often ignore – emotional intelligence. With its emotive personality, Eilik makes sure work never feels boring. Just like a Tamagotchi, the little robot demands attention, scowls when it doesn’t get any, and smiles when you tickle it or pat it on the head. It responds positively to rubs and pats, and gets annoyed when you flick at it. Lift Eilik off the ground and it gets scared of heights, and the best way to pacify it is to either calm it down by rubbing its head, back, or belly, or giving it food – in the form of magnetic little food replicas that attach to its movable arms.

Eilik loves to play with his own kind.

Eilik responds using its hands, head, and a dynamic display for a face. With highly expressive eyes that tell you how it’s feeling, Eilik even makes emotion-appropriate sounds and noises, sort of like an electronic pet that purrs on its own or mimics what you say like a physical Talking Tom. If left alone, Eilik will entertain itself (and you too), although you can even pair two Eiliks together and they’ll play with each other and occasionally even have adorable tussles and toddler-esque fights. Pair multiple Eiliks together and they literally form a tiny army that sings and dances in unison, like your own personal minions. Yes, they even sing Christmas carols!

The importance of Eilik, however, lies beyond its toy-like nature. It isn’t just another AI-powered tabletop pet, but rather, hopes to be the first step towards having real-life robot assistants in the future. Eilik relieves stress the way a pet would, but it also helps with work by acting as an alarm clock, a stopwatch, or a Pomodoro timer, with future updates adding even more functionality to your tabletop bot-buddy. 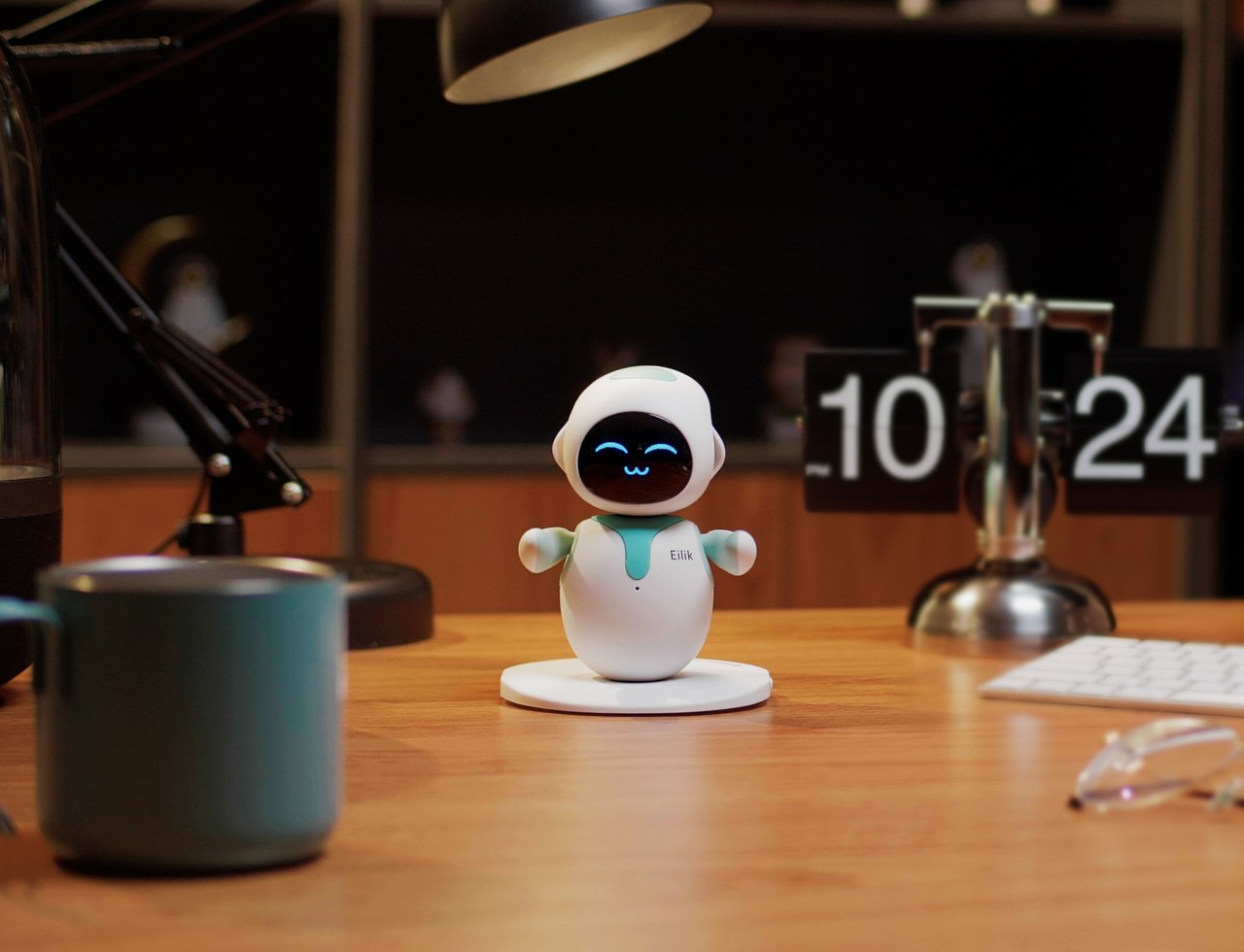 On the hardware front, Eilik is built with pretty sophisticated internals. The robot uses a proprietary EM3 servo motor that allows the hands to be more flexible and dexterous. In fact, the hands act as controls for the robot’s screen brightness and volume, allowing you to simply adjust them by lifting the hands up or down. A slew of sensors within the robot allows it to detect voices, touch, impact/shock, and even if it’s being elevated, and the robot effectively communicates using its dynamic face unit, speakers, and even a vibration motor that provides haptic feedback similar to an animal reacting to being petted. Each Eilik comes as a standalone unit that stands at 5.2-inches tall, and ships with a manual, Eilik’s software, as well as a USB-C cord for charging it as well as connecting it to a PC to configure the bot. If your desk’s lacking a little panache and personality, Eilik’s available for a Kickstarter-special price of $99, with the little robo-buddy shipping in April 2022.

Art for Your Apple Watch

The latest from Tokka, the Tänään Apple Watch Charging Dock is a modern, sculptural design worthy of your beside table! Made by hand by a…

Skateboard with the spirit of a bike

Is it a bike? Is it a skateboard? Is it a scooter? What is it?! The Gauswheel is nothing like anything we’ve seen before. It…

The User-friendliest Biofuel Stove Ever!

The Penguin Stove is to biofuel what the Bunsen burner is to the naked flame! It burns more efficiently than any other naturally aspirated stove…

The Power of Bamboo