Costing roughly as much as you’d spend on Netflix in a year, the Jireno CUBE4 lets you watch your favorite shows in FHD on a sprawling 200-inch projected surface. Touted as the “world’s brightest 100-percent sealed portable projector”, the CUBE4 clocks in at 500 ANSI lumens coupled with HDR10+ for incredibly vivid detail, and a 3,000:1 contrast ratio. It runs at 1080p, although the projector supports 4K decoding, comes with a built-in smart TV system, has its own integrated speakers, and flaunts a price tag of less than $200. 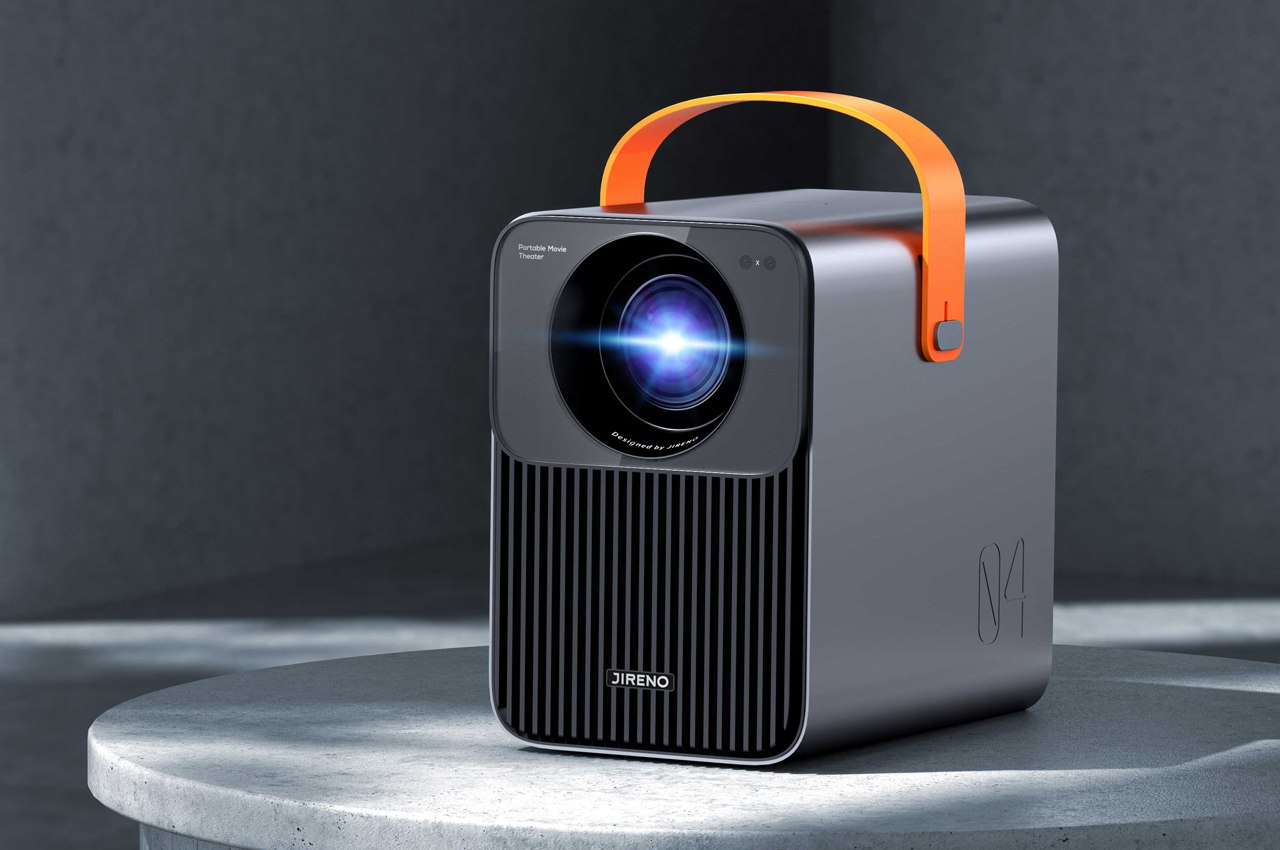 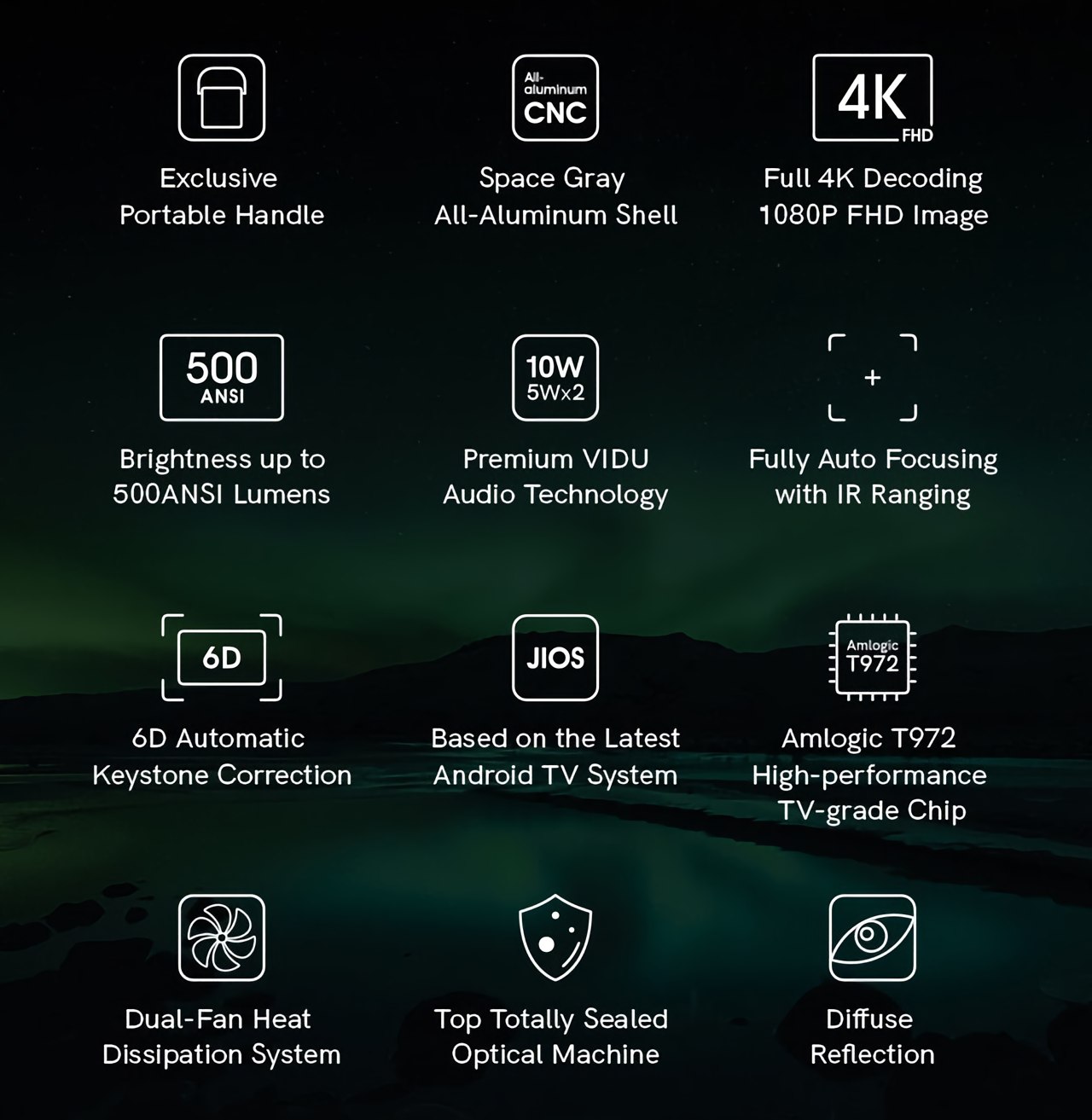 For under two Benjamins, the Jireno CUBE4 makes pretty lofty promises. Sure, it isn’t a 4K multimedia device, but then again, it delivers an absolute bang for its buck. The projector comes with a compact design that’s reminiscent of the Anker Nebula Mars 2, with its handle on top that lets you carry it around the place, so you can bring the party to your friends’ houses. Although it’s marketed as a portable projector, the one thing it lacks is an internal battery, so having a power-source nearby is a must. 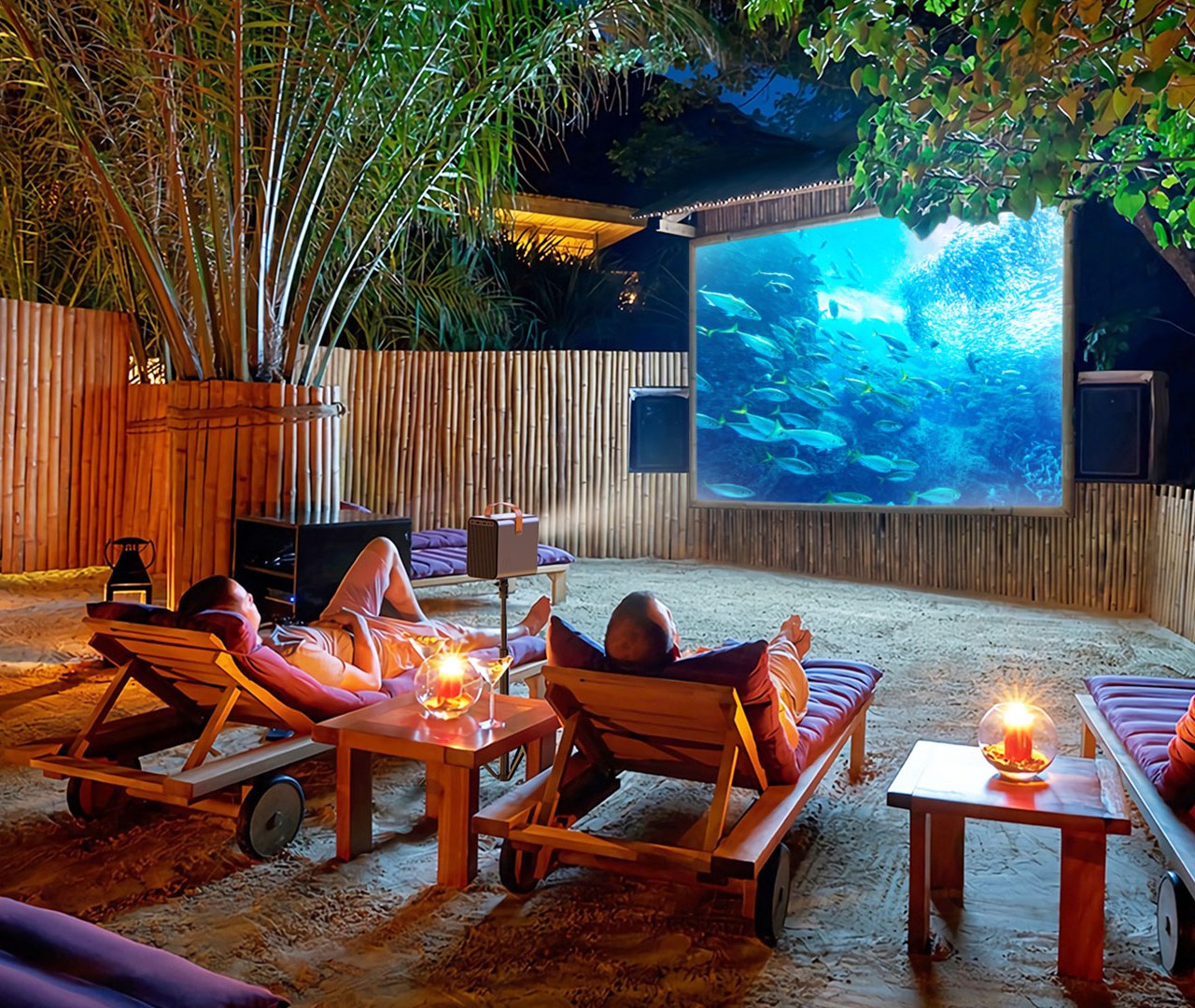 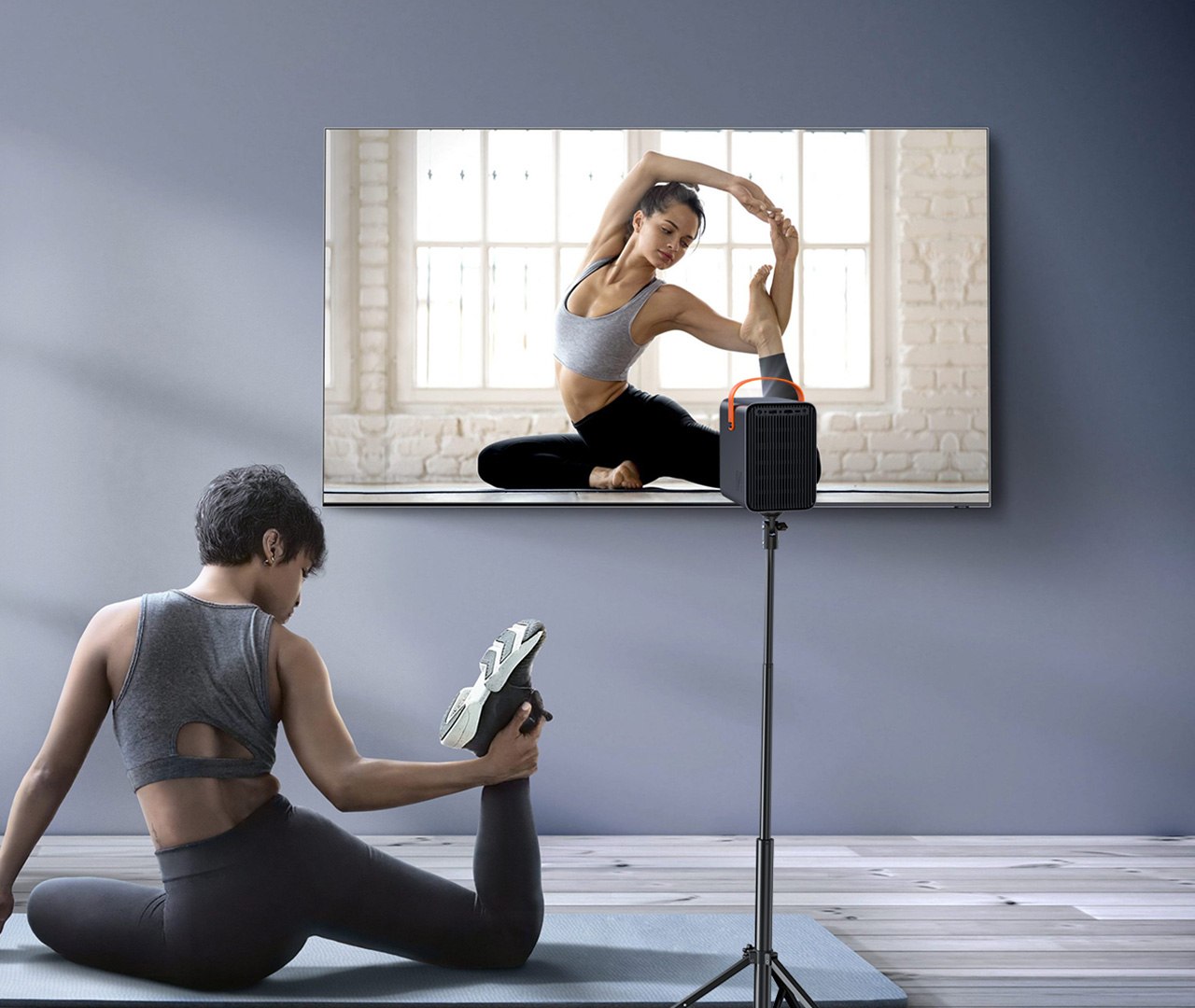 On the design front, the Cube4 has an all-aluminum body which, aside from giving the projector its premium aesthetic, also helps with heat dispersion, allowing the projector to stay cool at all times – a feature further reinforced by the CUBE4’s potent inner cooling system. The projector runs its own version of Android TV, titled JIOS, which supports all major titles from Netflix, Hulu, Disney+, and HBO, to even YouTube, Spotify, and social networks like FaceBook, Twitter, and TikTok. The projector comes with its own remote control, and can be further paired with your set-top box, laptop, or even gaming console via HDMI and USB-A, or your phone via Chromecast or AirPlay and other gadgets via the traditional Bluetooth 5.0 and Wi-Fi.

Equipped with a hand strap, allowing it to be carried easily to whatever location.

The CUBE4 supports 4K decoding and boasts a native resolution of 1920 x 1080P. This assures a cinema-level experience, whether you project a 30-inch image against a bedroom wall or utilize the side of your garage as a 200-inch screen.

With HDR10+ support, CUBE4 can provide you with richer light and dark details, so that your TV programs, movies, and sports events have a more natural color transition and more realistic images.

CUBE4 is fitted with 6D automatic correction, it quickly calculates the change in keystone error and readjust the image. 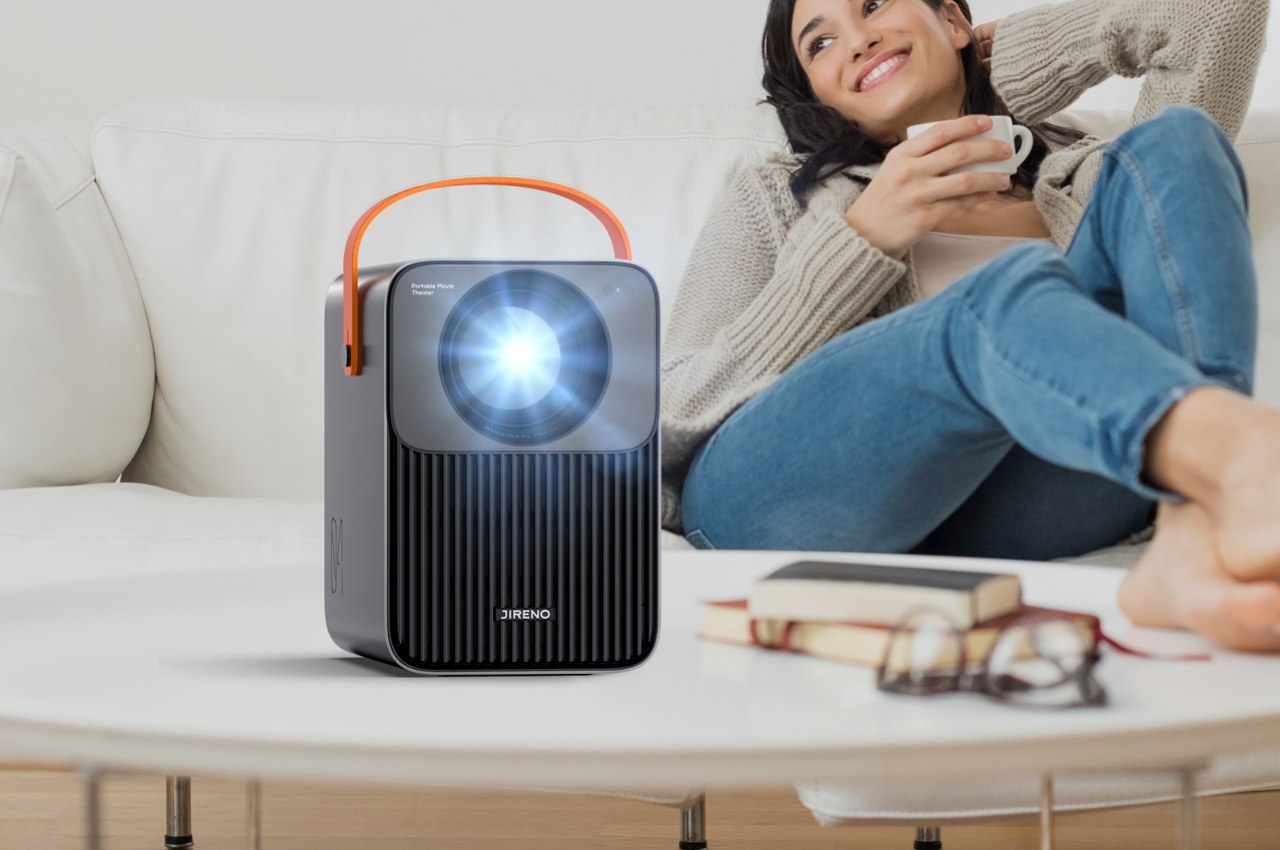 The CUBE4’s completely sealed design actually reinforces its portability. The fact that specks of dust can’t get in keeps the lens system clear, and the CUBE4’s 6D automatic keystone correction lets you place the projector at any angle and still have a perfectly rectangular, aligned image every time. The CUBE4 packs its own powerful 5W speakers for booming audio, and even throws in a 3.5mm audio input if you want to plug your own speakers in. The FHD projector’s most impressive feature, however, remains its price. Available on Kickstarter for an Early Bird $197, the CUBE4 is a fraction of the cost of your average smartphone, with the capability of pumping out a 200-inch display while costing effectively the same price as a smartwatch with a 3-inch display. You can grab the projector as a standalone unit, or opt for a bundle that also includes a tripod, an 84″ projector screen, and a carrying case for your CUBE4. Deliveries begin in February 2022.

If overkill were a tablet, it would look like the M2 iPad Pro… Did the iPad really need an M2 chip? Chances are that if…

Tropicfeel’s new footwear is as comfortable as a sock, but as versatile as adventure shoes

Run on the roads, jog on the beaches, trek mountain terrain, or even take a dip in the sea, Tropicfeel’s Jungle Shoes should serve you…

Ready for the Samsung Galaxy 6?

The latest kid on the block is the Samsung Galaxy 6 concept phone. Its super simple and super thin, quite the candidate for #Bendgate ……

People are advised to cook their own food to help keep meals fresh and keep track of all the calories they consume. Easier said than…