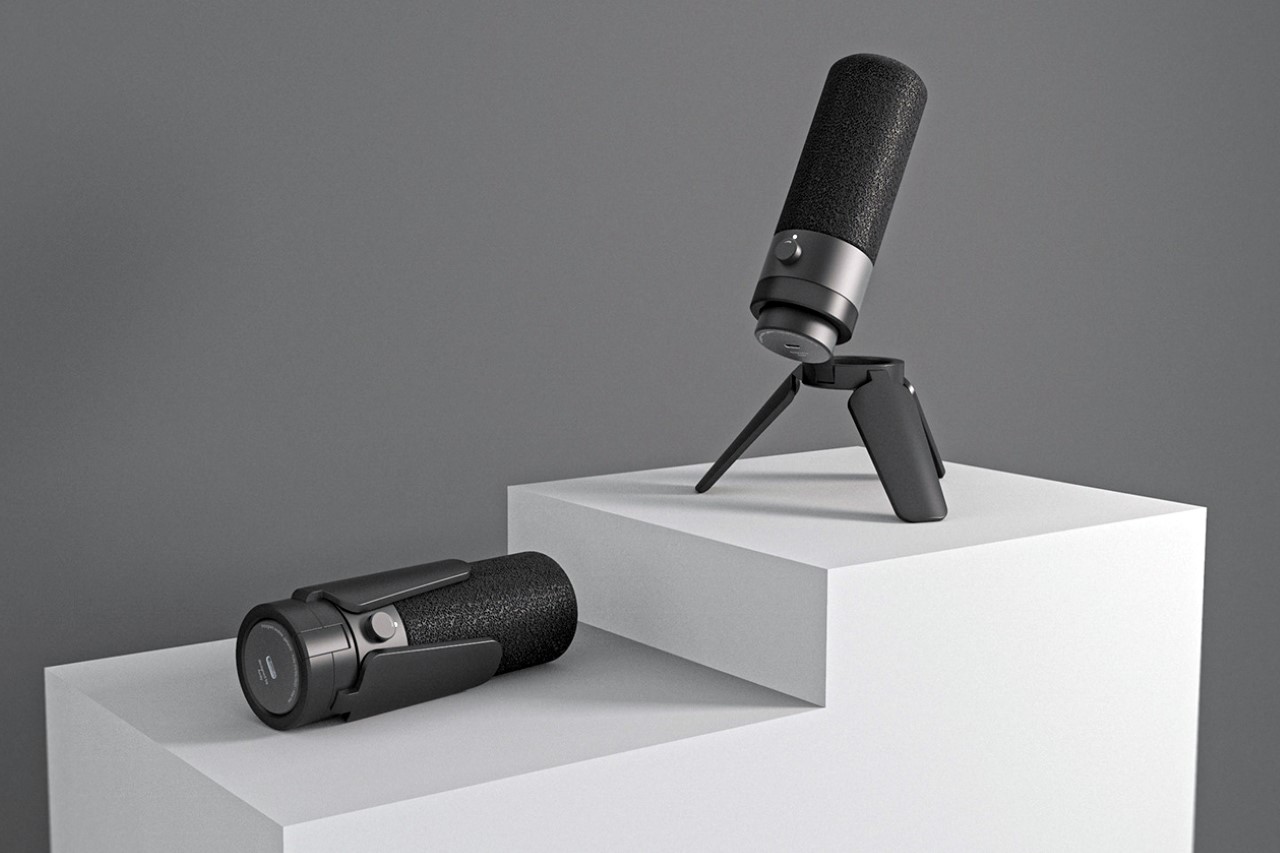 Designed so you can set up your podcasting studio practically anywhere without an array of expensive equipment in mere minutes, the TALK microphone concept is a form exploration exercise that seeks to make the studio-grade condenser microphone sleek and portable. The design features a foldable base with 3 individually adjustable legs, effectively combining the mic and tripod all into one form. When closed, the TALK microphone is the shape and size of a deodorant can, and when opened, is an easily adjustable tabletop microphone that connects to your smartphone, tablet, or laptop directly via USB-C. 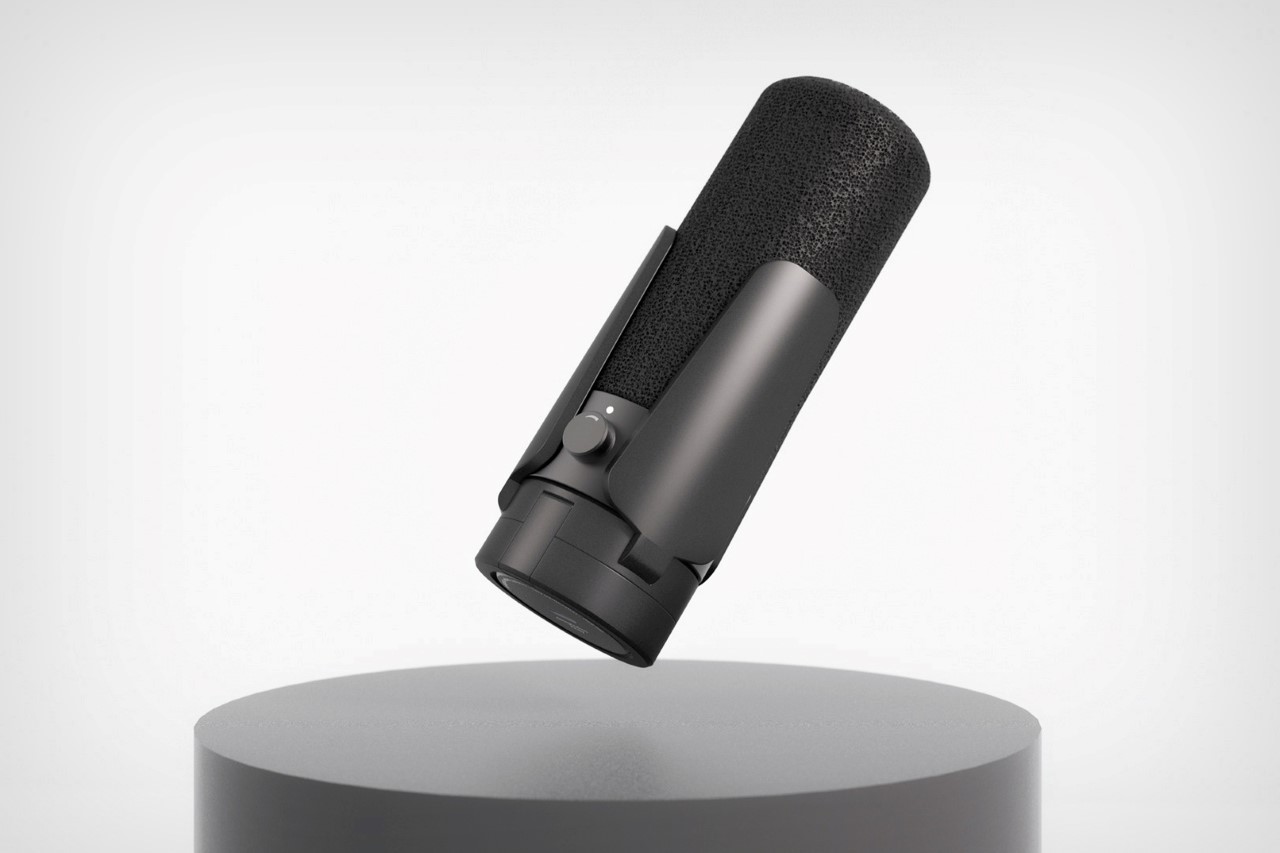 The podcasting boom post-2018-19 has really created a major market for ‘podcasting microphones’. Microphones recommended for podcasts are no different from the ones used in recording studios (condenser mics), although their interface has been simplified because not everyone has the luxury of being able to set up a studio space just for podcasts. For people who don’t want to invest in studio equipment, and don’t believe in recording episodes on crummy earphone mics, podcasting microphones offer the perfect balance between the two by being compact and uncomplicated, yet versatile and high-end enough to capture high-quality audio recordings. 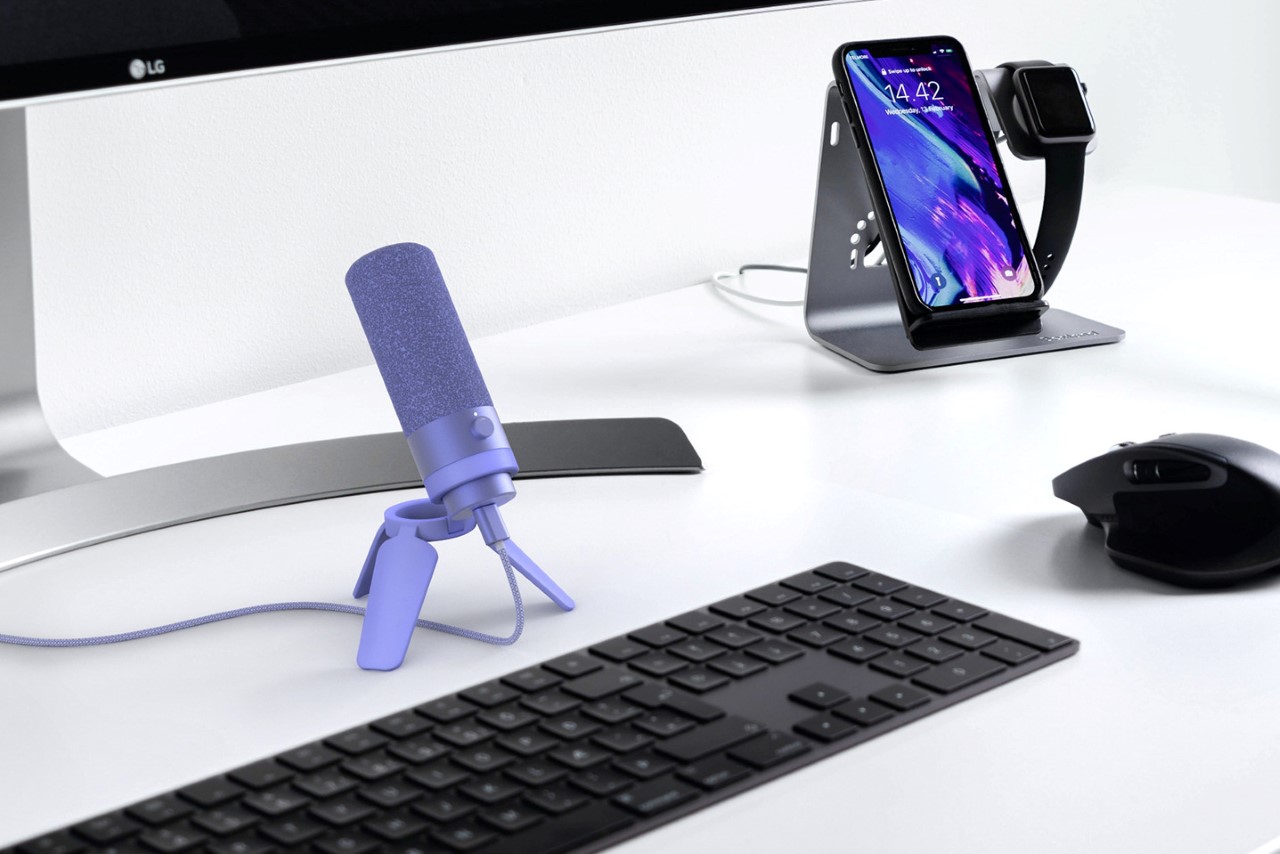 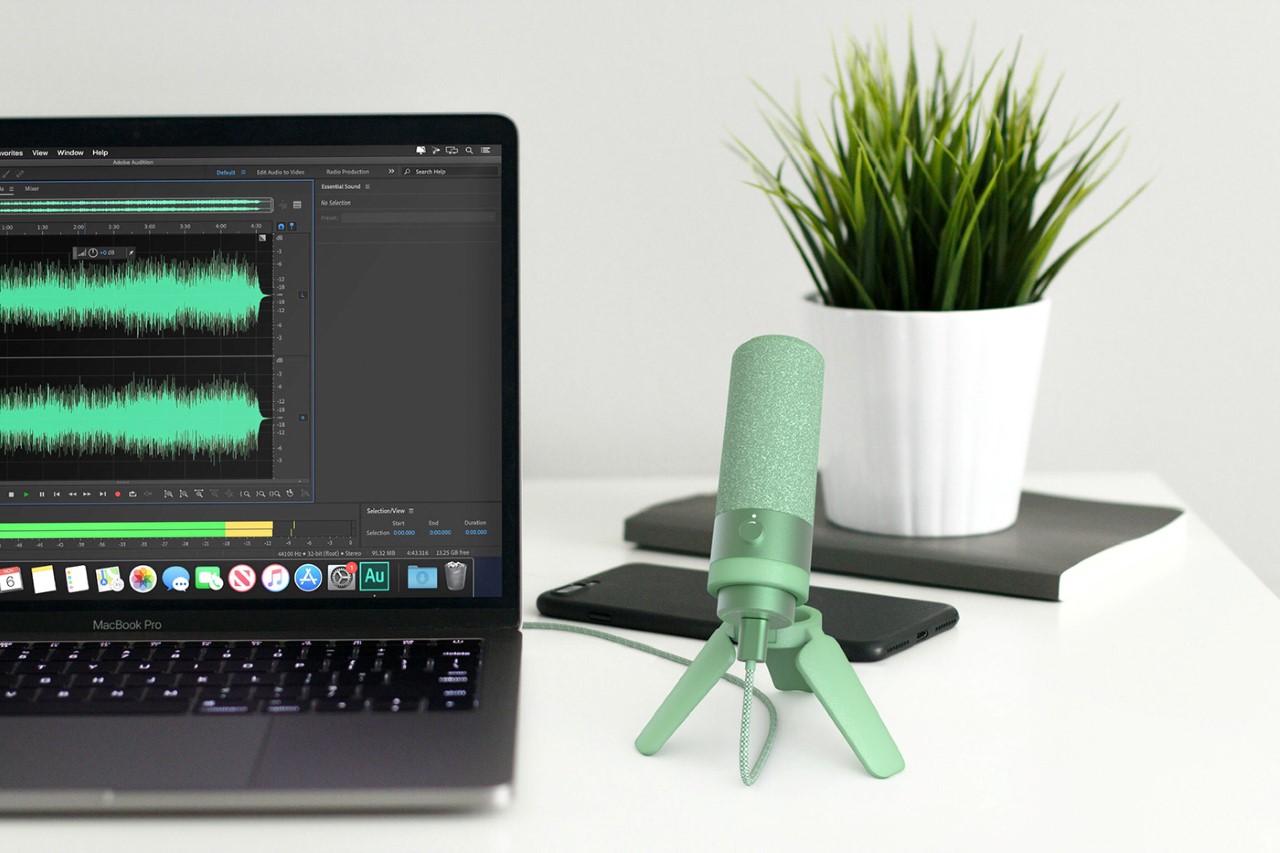 The TALK mic is perfect for people who don’t podcast from a dedicated space. Designed clearly to be carried around, the microphone folds right up into a slim cylinder, slipping easily into backpacks, while the mic’s USB-C interface eliminates the need for those thick audio cables. The microphone sets up in mere seconds, unfolding open while the legs fan out to create a neat tripod. The microphone’s angle can easily be adjusted too, and a simple gain knob on the front lets the host quickly control the input volume directly from the mic itself. 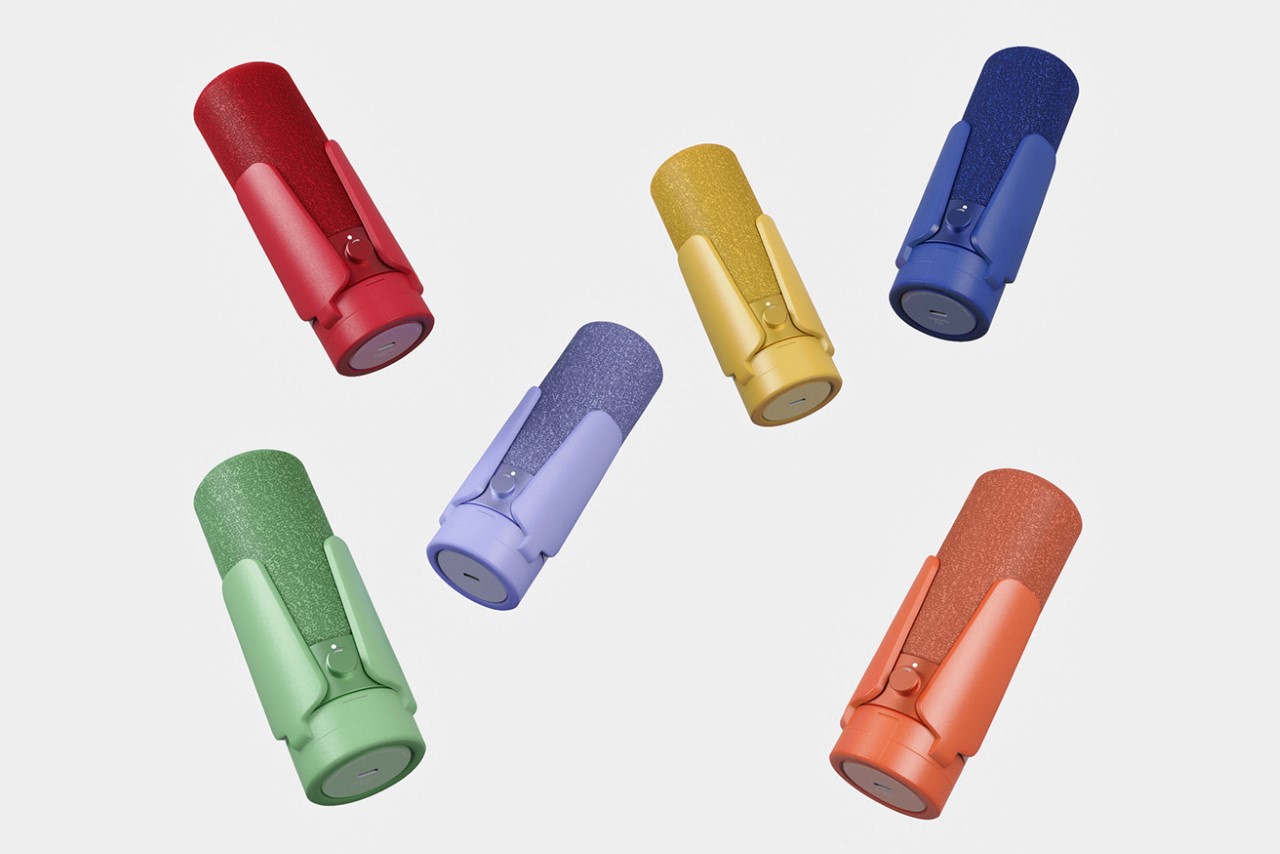 What’s wonderful about the TALK concept is that it doesn’t just physically uncomplicate the act of podcasting (by being compact and easy to use), it removes the veneer of studio equipment being serious too, with its incredibly fun color-ways. Unlike most studio-grade audio gear that comes in either black or metallic finishes, the TALK explores a variety of colors that absolutely pop… almost like they were DESIGNED to be paired along with Apple’s latest iMacs! The microphones look to ‘speak’ to their users, allowing them to reflect the attitude of the people speaking into them, while still offering black and white color variants for those who just want to stick to the classics. 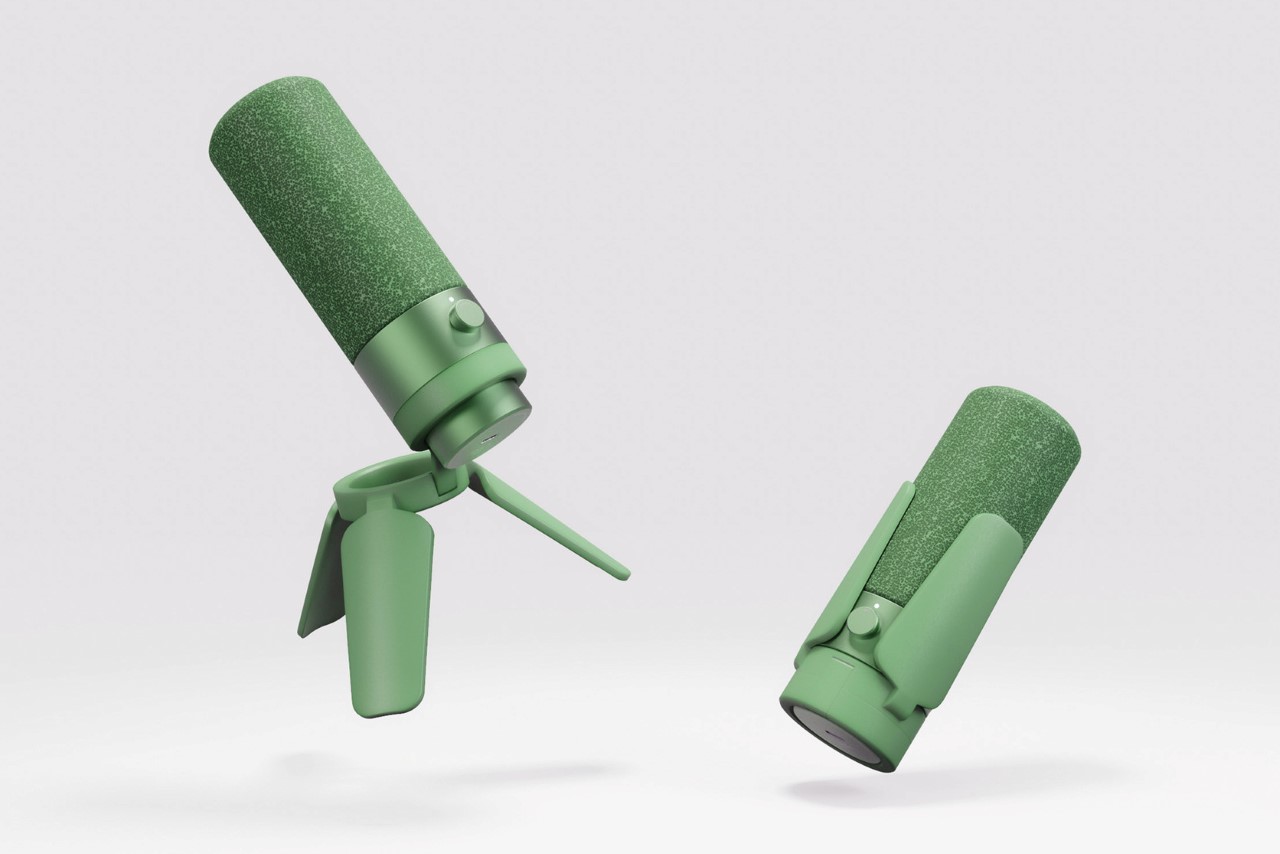 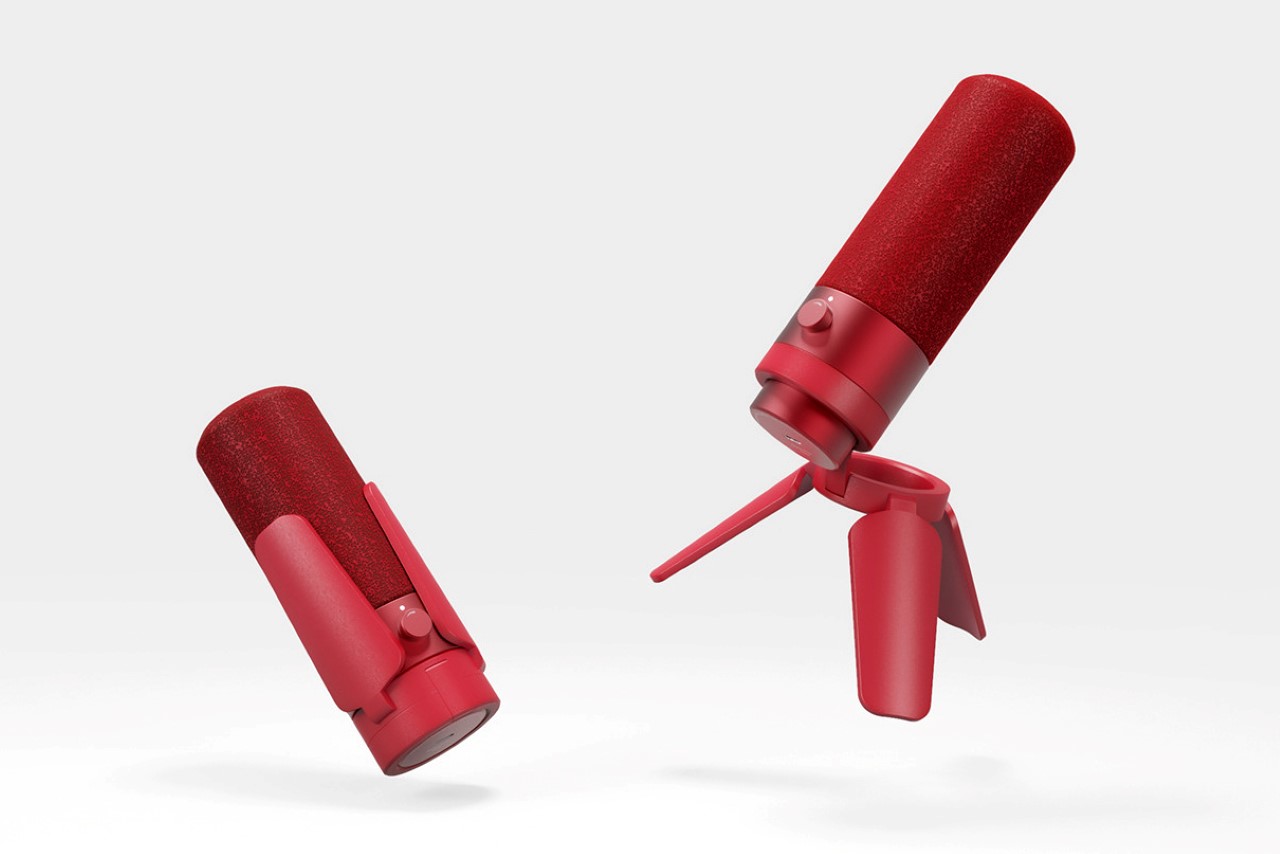 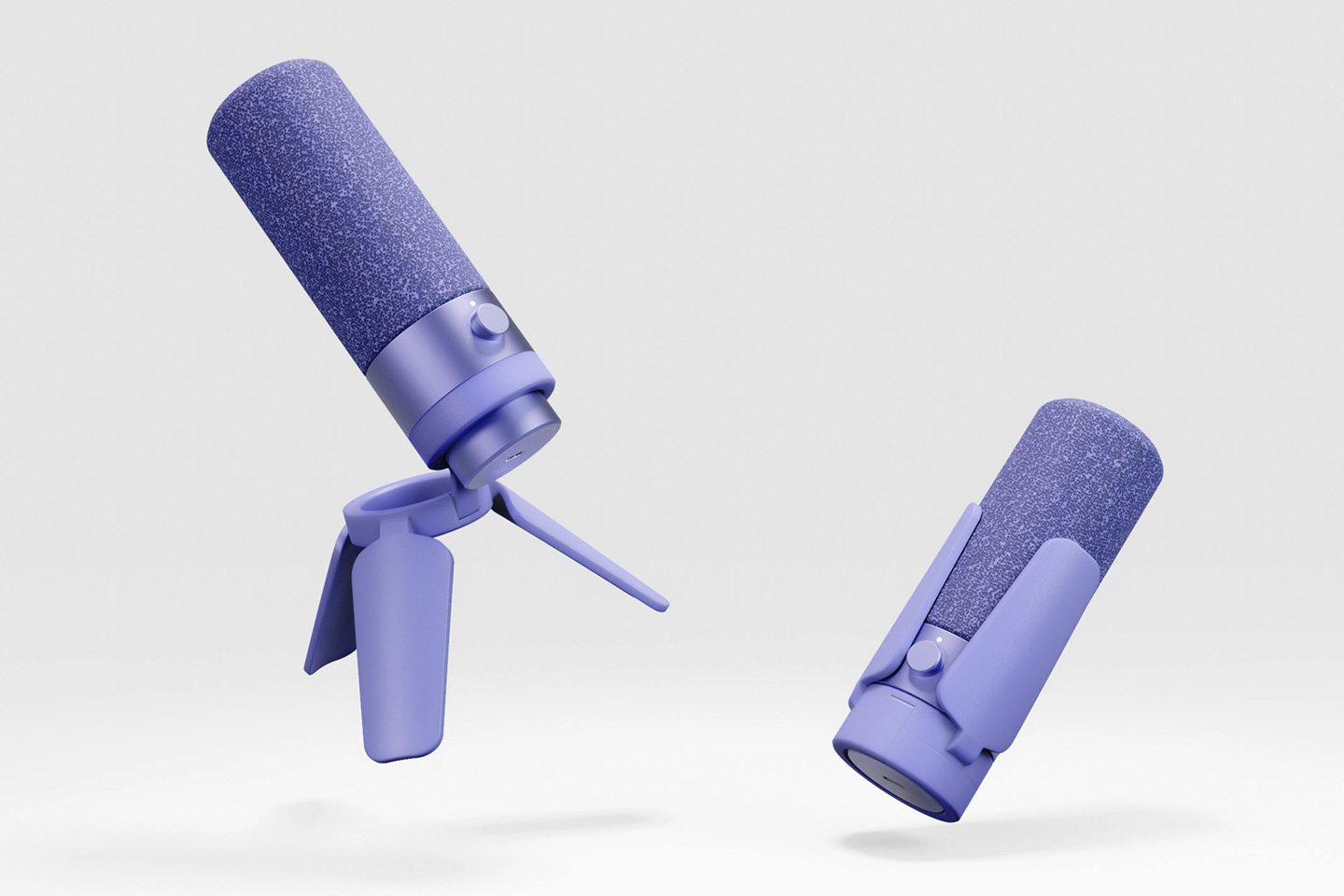 The TALK microphones are the pet project of Italy-based designer Andrea Gallarini. Wanting to simplify the recording process into 3 steps – open, connect, record, Gallarini created a microphone that hopes to do for professional recording what the iPhone did for photography. Obviously, the TALK isn’t limited to just podcasts. The fact that it still is, on the inside, a condenser microphone makes it perfect for recording music, streaming, presenting/hosting, or doing voiceovers or Foley work. The mic’s just a concept for now, and is more of a form and design exercise than a proof of concept. The biggest caveat with condenser microphones remains the fact that they’re incredibly delicate pieces of hardware that need to be handled with care… so the idea of a microphone that’s designed to fold up and fit in a backpack seems like a real-world logistical challenge that the TALK doesn’t quite address… although maybe a padded soft-shell carrying case would really seal the deal! 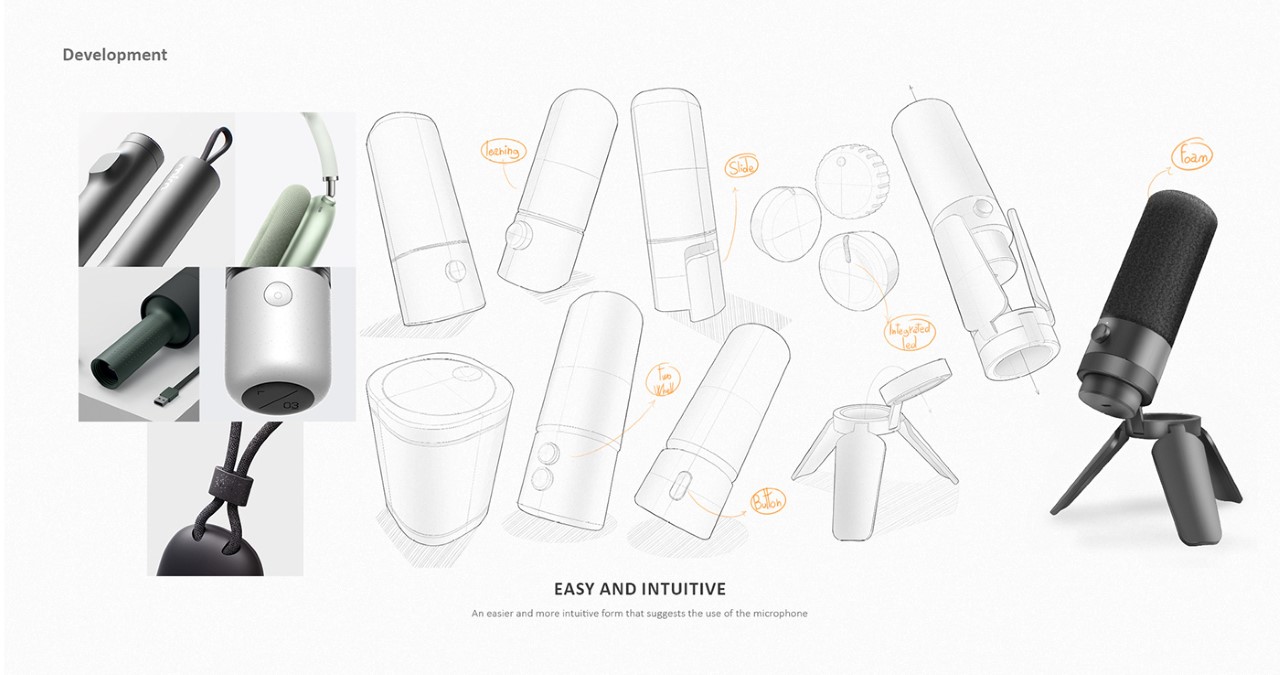 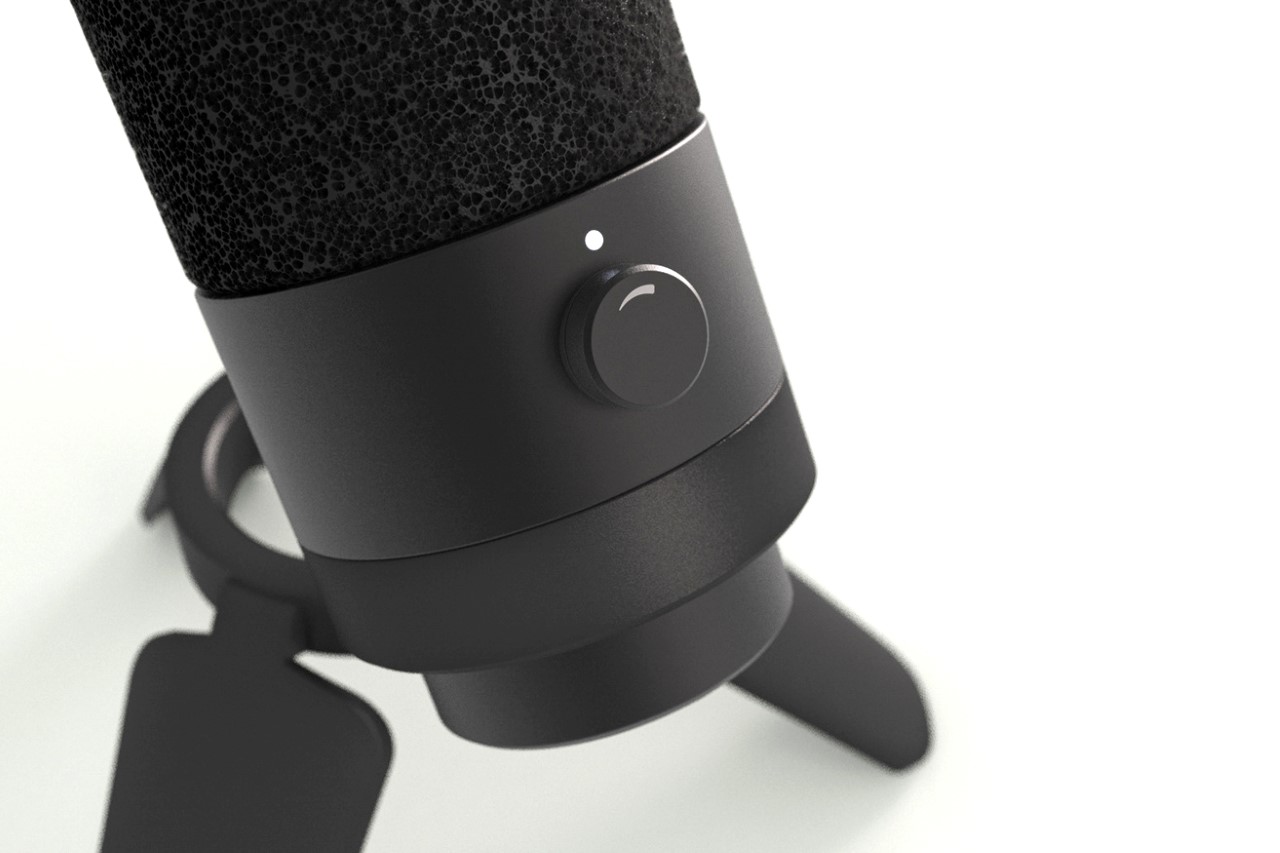 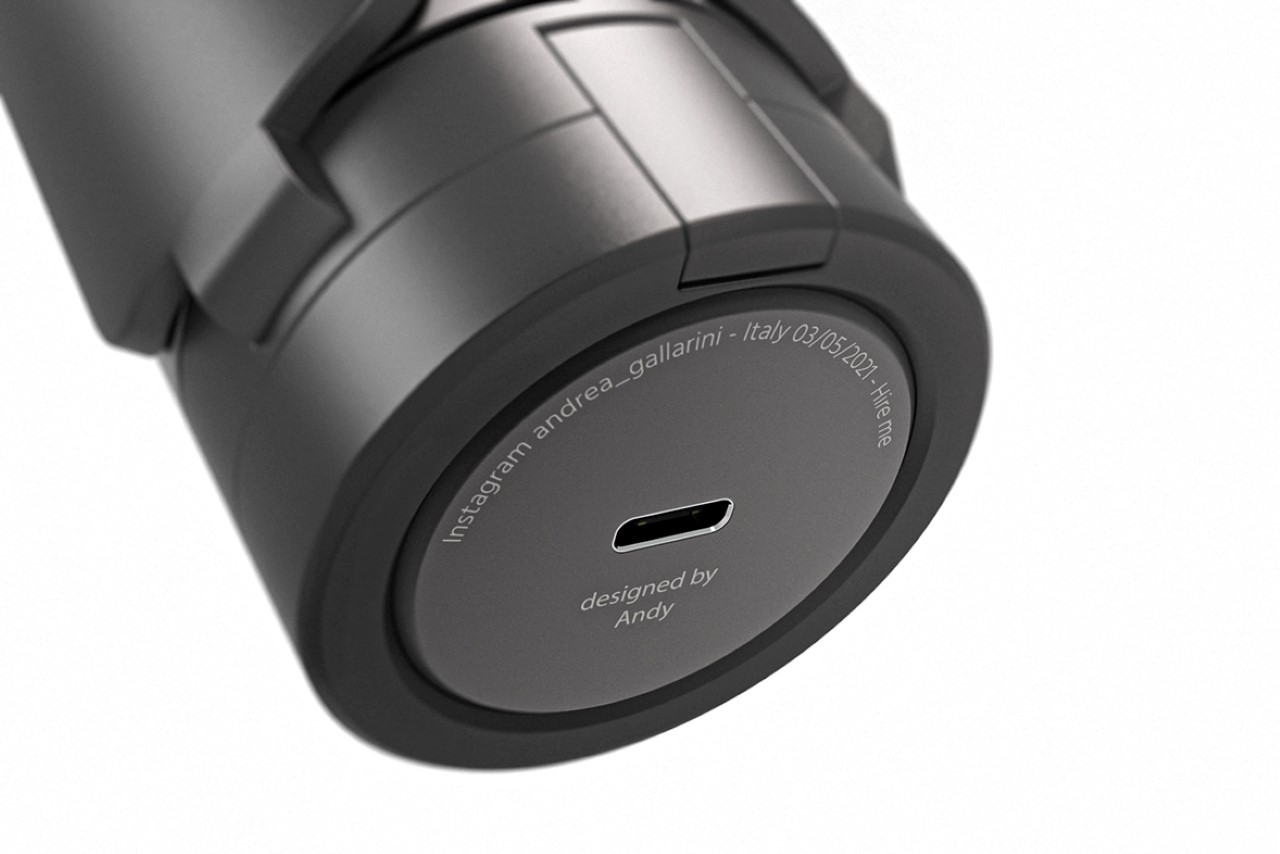 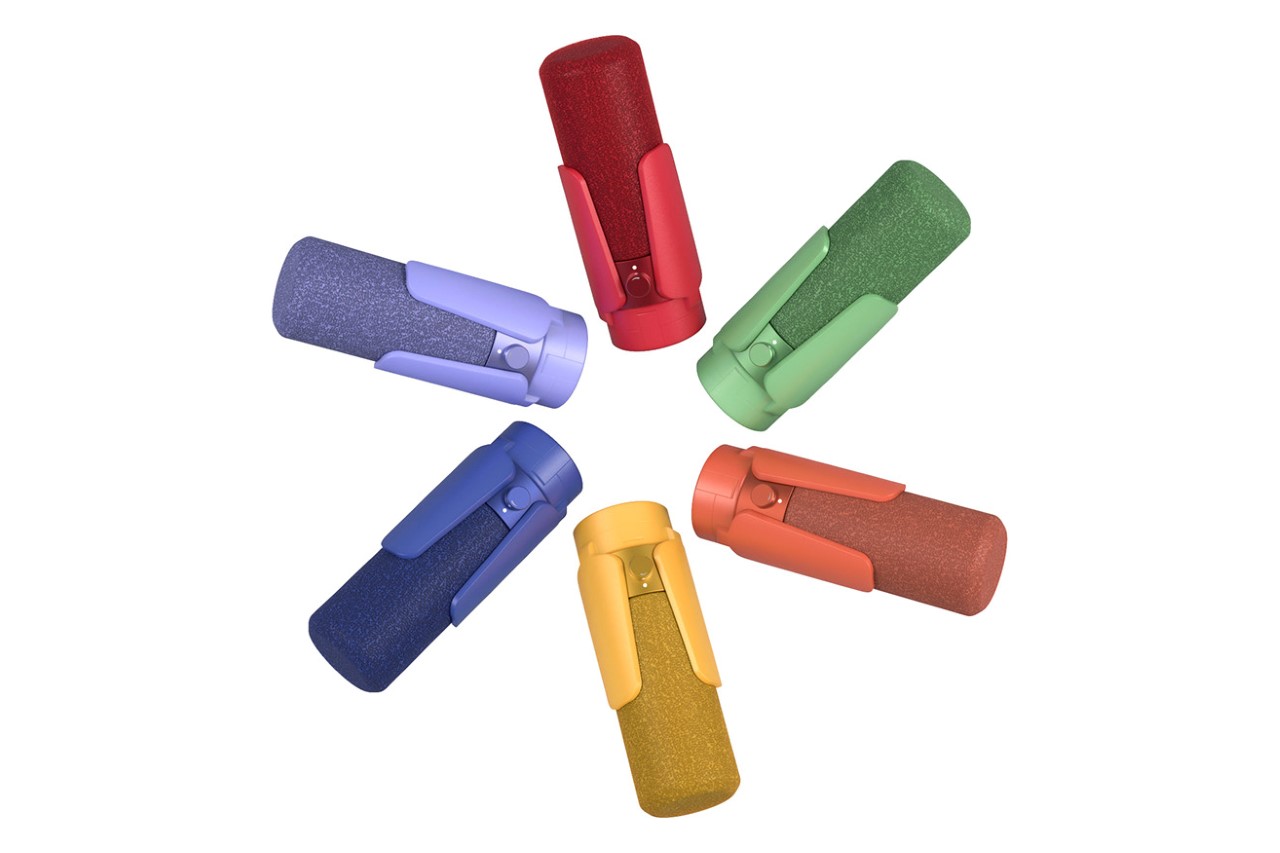 Pioneer the age of driverless cars! Waymo is looking to hire an Industrial Designer!

The final frontier of road-travel is the self-driving car… that’s until we have self-driving flying cars, which won’t be a stretch once we’ve figured out…

Self-confessed retro lover is here to tell you about this remarkable find! Bringing a modern-day charm to the long-forgotten LP player is the Zero. 1….

Not everyone will be keen on wearing even glasses to experience this metaverse thing. Fortunately, you might not have to, especially if this hologram-in-a-box can…