It’s probably the most oddly functional little Apple accessory I’ve seen, but it does something I’ve never seen any other product do – simultaneously wirelessly charge your iPhone, Watch, and your AirPods simultaneously.

The Chargepuck is what you get when you mash the words MagSafe, AirPower, and PopSocket together. About the shape and size of a hockey puck, this little number snaps onto the back of your iPhone, offering the powers of a wireless charger, with a pop-out ring that doubles as a holder/stand for your phone. If somehow that wasn’t enough, while one surface of the Chargepuck remains magnetically adhered to the back of your iPhone, the other side lets you attach an Apple Watch, while two tiny holes along the rim let you dock your AirPods earpieces, and the Chargepuck effectively charges all three devices simultaneously… something the AirPower mat could never do. 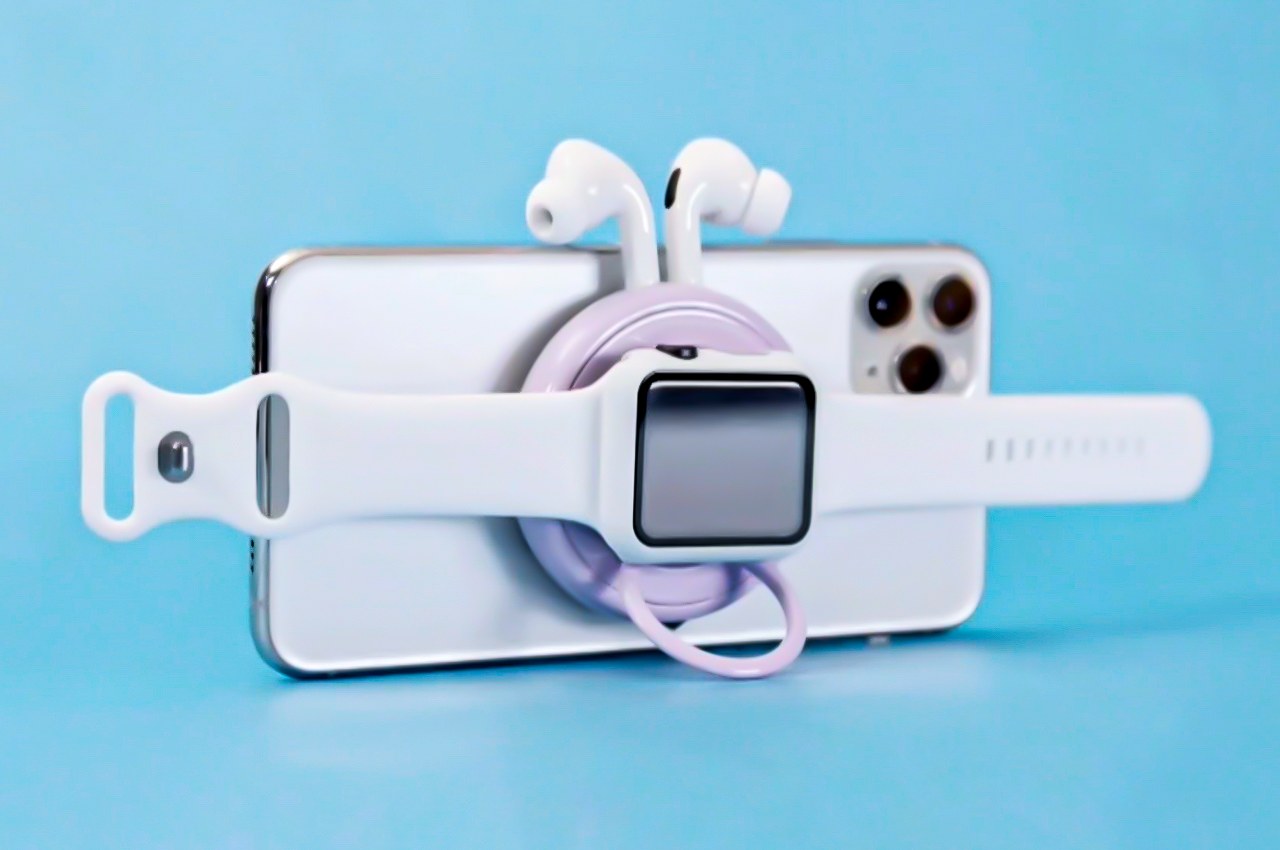 The Chargepuck acts as a replacement for the wireless charging dock or mat you’ve probably got lying on your desk or somewhere at your bedside. Instead of being a static device that sits plugged into an outlet forever, the little puck sits attached to your iPhone and comes with its own retractable cable that lets you plug it in anywhere. The Chargepuck isn’t a battery pack (it doesn’t have its own battery inside it), but rather, it’s a charging apparatus that sits attached to your phone and lets you charge three devices at the same time. 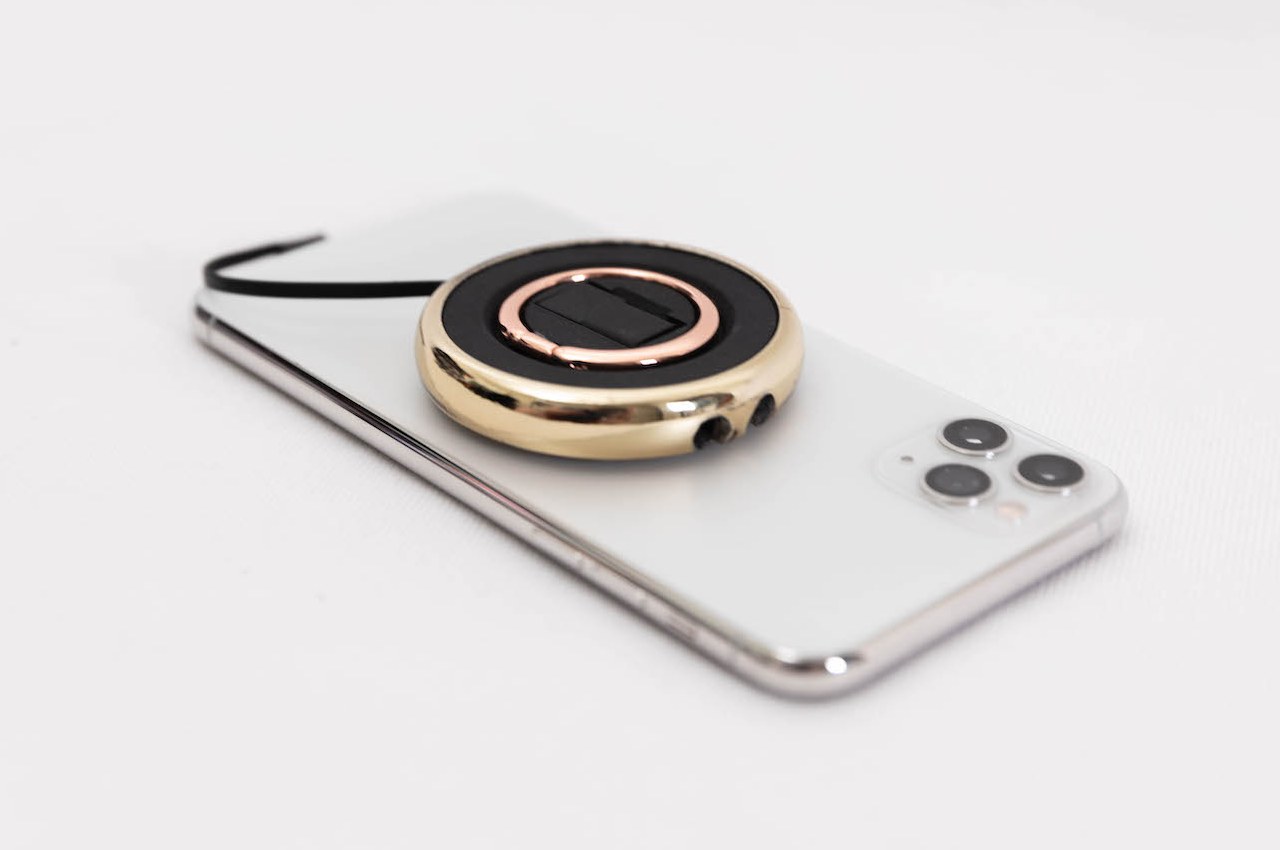 The puck-sized device supports MagSafe-ready iPhones, but works with other older iPhone models and Android phones that charge wirelessly too. The Chargepuck comes with a “Nano-suction” surface that lets it temporarily stick onto the back of phones and cases (provided the surface is flat, clean, and un-textured), and even ships with an adhesive magnetic ring that you can glue to the back of your phone or to your phone case to make them MagSafe-ready.

The innocuous-yet-ridiculously-functional device can basically be split into its 3 most prime features – the PopSocket-style Ring/Stand, the coiled retractable charging cable, and the consolidated wireless chargers for your phone, Apple Watch, and AirPods. The ring-shaped stand can be rotated 360° and adjusted to any angle you choose, and the retractable cable inside the Chargepuck has a USB-C port and measures 3 feet in length. Right in the center of the ring lies a coil that lets you charge your Apple Watch, and two little ‘nostrils’ on the side of the Chargepuck let you directly charge/store your AirPods earbuds, offering a new charging solution that practically does away with the AirPods case. If, however, you’re a bit of an old-fashioned Joe who likes to charge the AirPods in their case, you can simply pull the Chargepuck off the phone and place your AirPods case on its main charging coil as if it were on a wireless charging mat!

The 3ft type-C cable comes out of the puck and retracts easily.

Chargepuck has a built-in phone grip and phone stand with a fully functional 360 degree ring.

With their Nano-suction technology, Chargepuck is even more versatile. Simply stick to your device or case without doing any damage.

All these features together make the Chargepuck one of the most unusual little devices I’ve ever seen, boasting of capabilities that I don’t think any other product possesses on the market. Sure, it may not really appeal to everyone (some Apple Purists are probably fuming at the idea of directly docking your AirPods in something else other than the AirPods case), but its mission statement is pretty much universal – to give you one consolidated place to store and charge your devices; while also obviously being compact and magnetic, and offering a neat little stand for your smartphone. The Chargepuck comes in a variety of color choices, and ships for $69.

A watch for vampires!

Clock design comes a ‘full circle’ with the V-Watch. Taking the earliest image of the clock (the sundial) and using it’s principle in a watch,…

Not Your Mama’s Fridge

The Sliver-Touch fridge is an intelligent appliance that identifies individual users and customizes the experience to simultaneously ensure food freshness and reduce waste. The design…

More than your average Music Box!

Made to bring absolute tears of joy to the analog synth lover, the Bivalvia Synthesis is a tiny wooden box that fits a remarkably powerful…

Trailer Designs that convert your camping life to glamping!

Camping, or planning my next camping experience has been one of my favorite past times over the past few months – I have tons of…