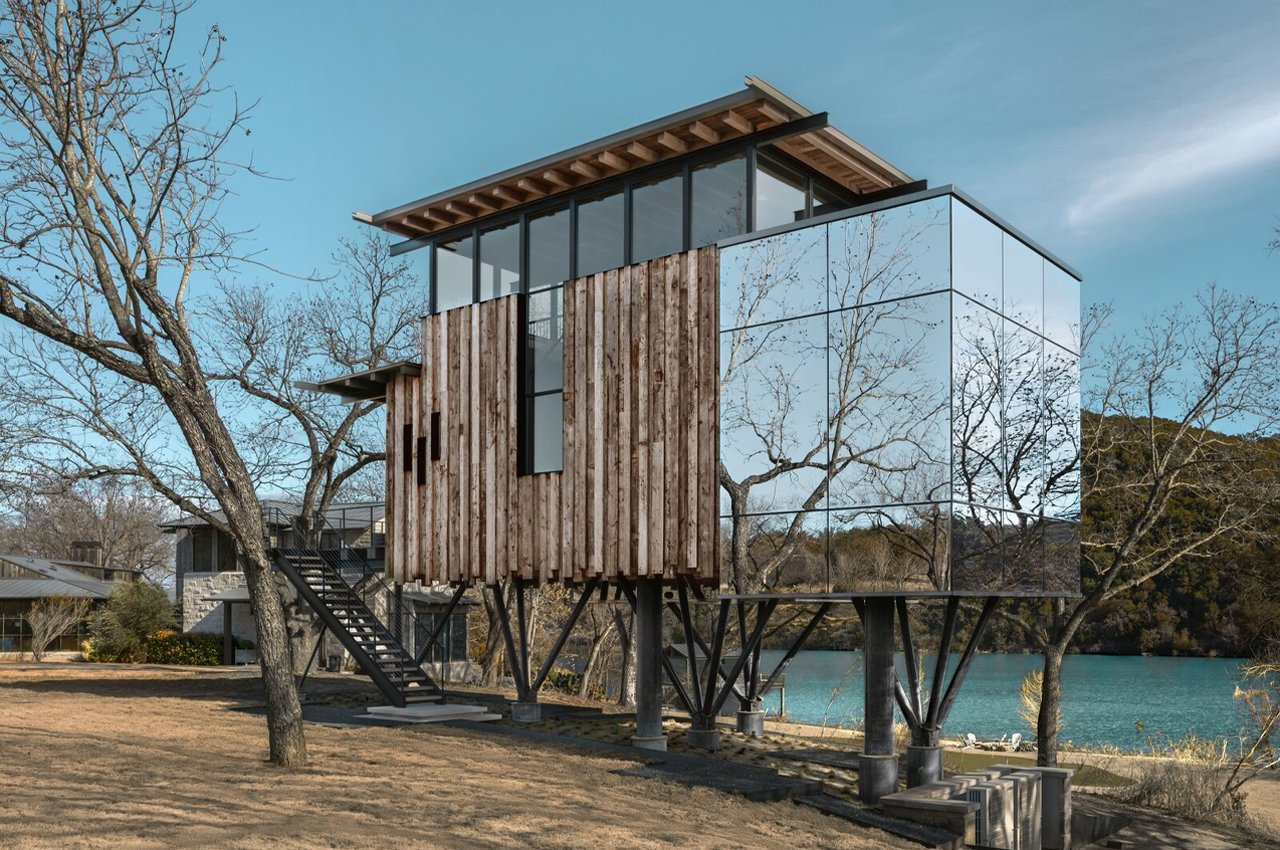 Designed by a couple’s daughter, the Tree House was built by Ryan Street Architecture Studio to provide a fun and rugged, forested escape from the family’s main residence.

The imagination of children never ceases to inspire. Brimming with daydreams, children are constantly drawing up sketches and coming up with zany ideas. Inspired by the drawings of their own daughter, an Austin-based couple turned to Ryan Street Architecture Studio for help building a treehouse in their backyard. Primarily designed to be a backyard play space for their two daughters, the couple decided to turn the treehouse into something much larger. 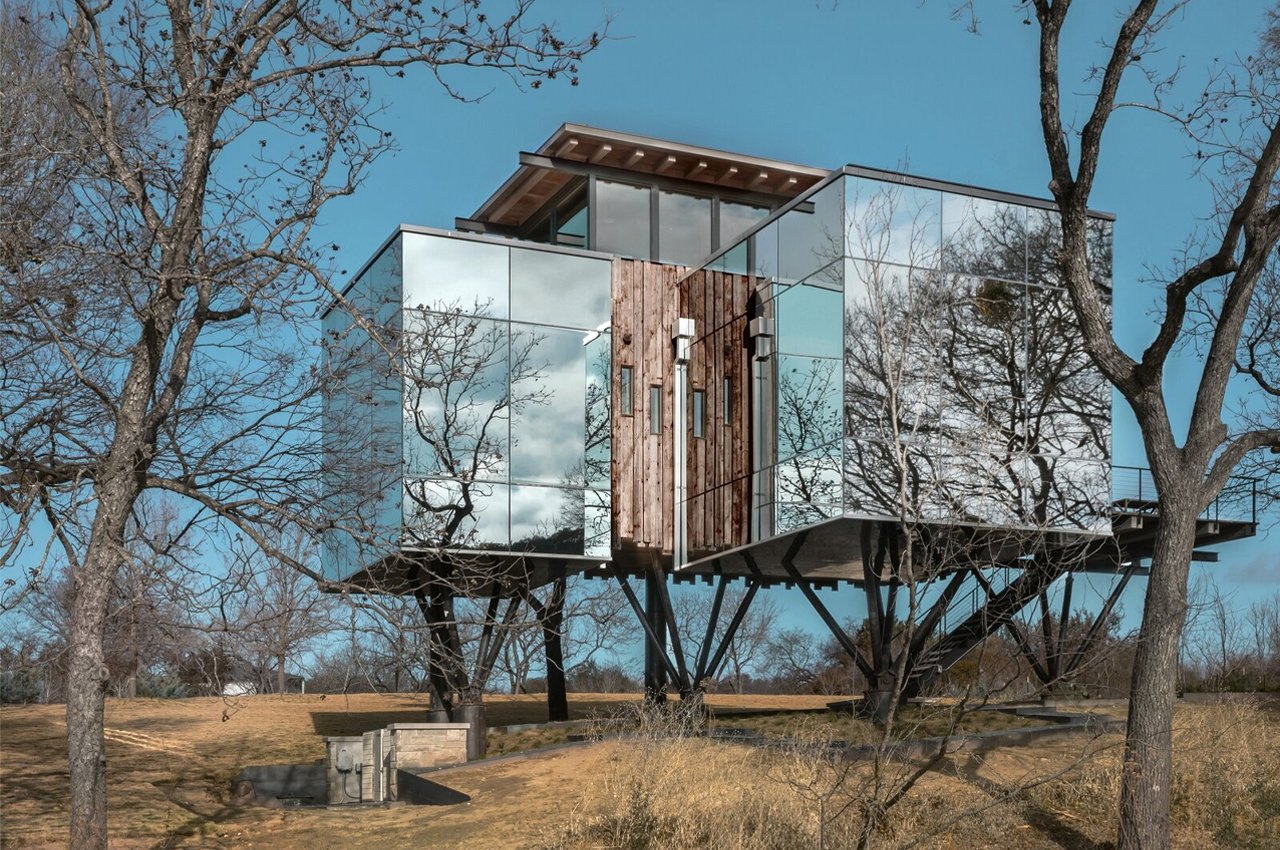 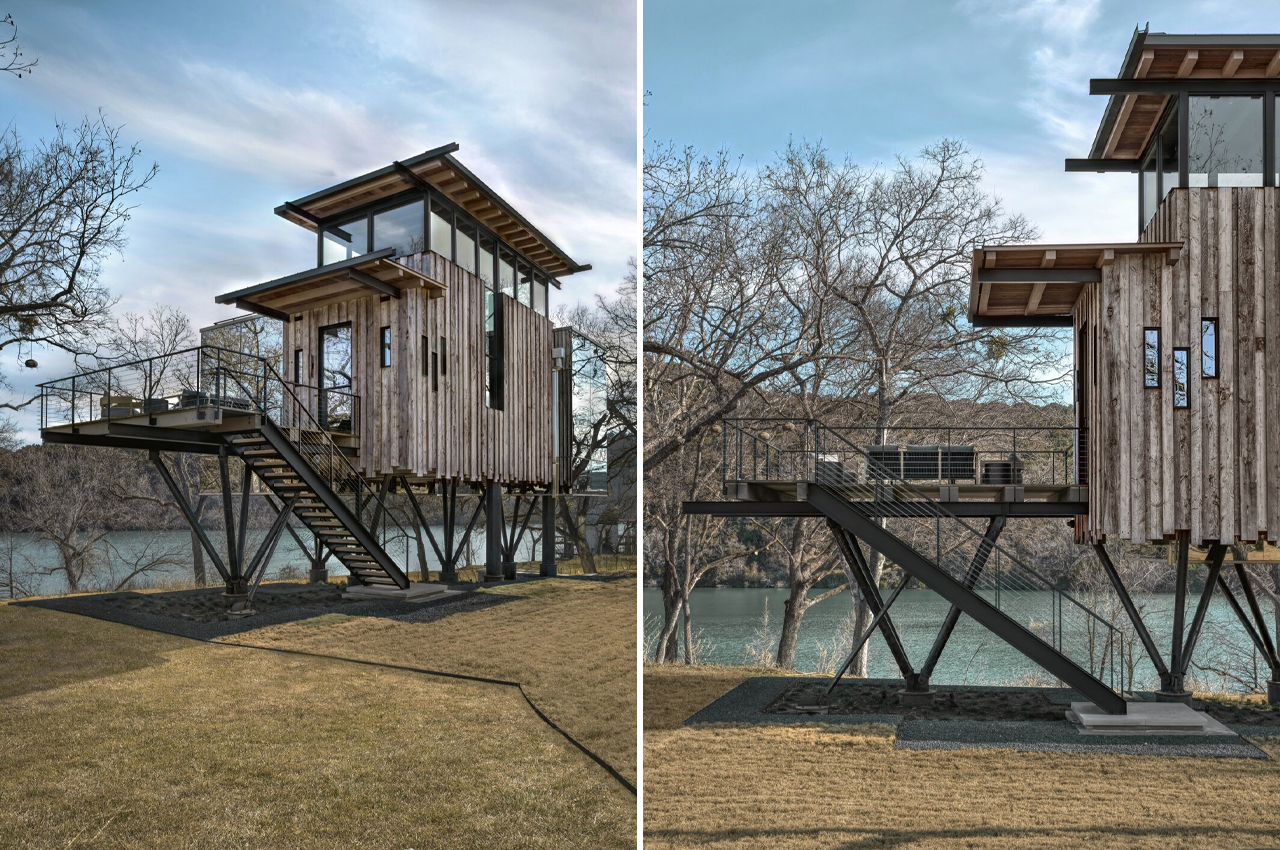 Perched atop a system of stilts that mimic clusters of tree branches, the Tree House almost appears like it’s floating above the clearing below. Transforming the floor plans from a children’s treehouse into a much more refined, spacious, and functional guesthouse manifested through the Tree House’s dizzying exterior details. 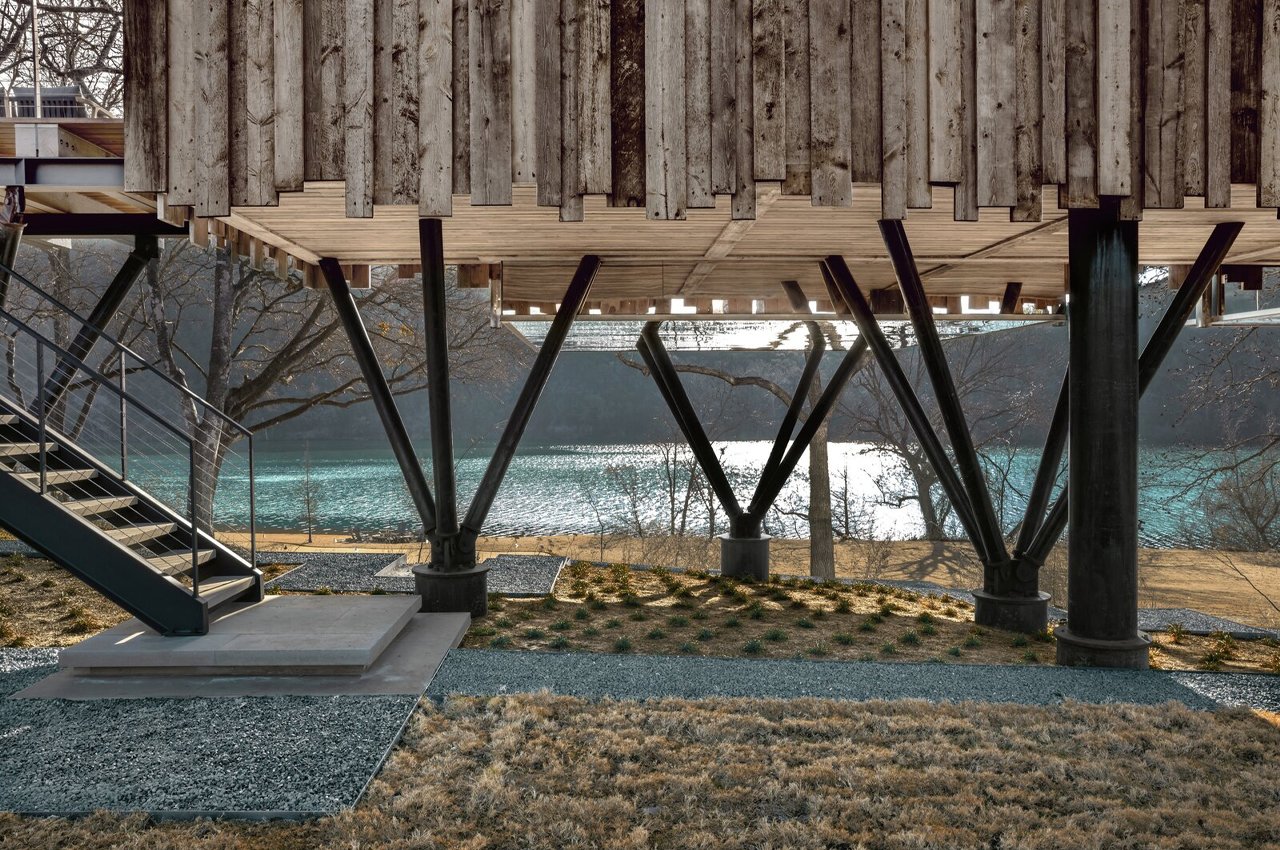 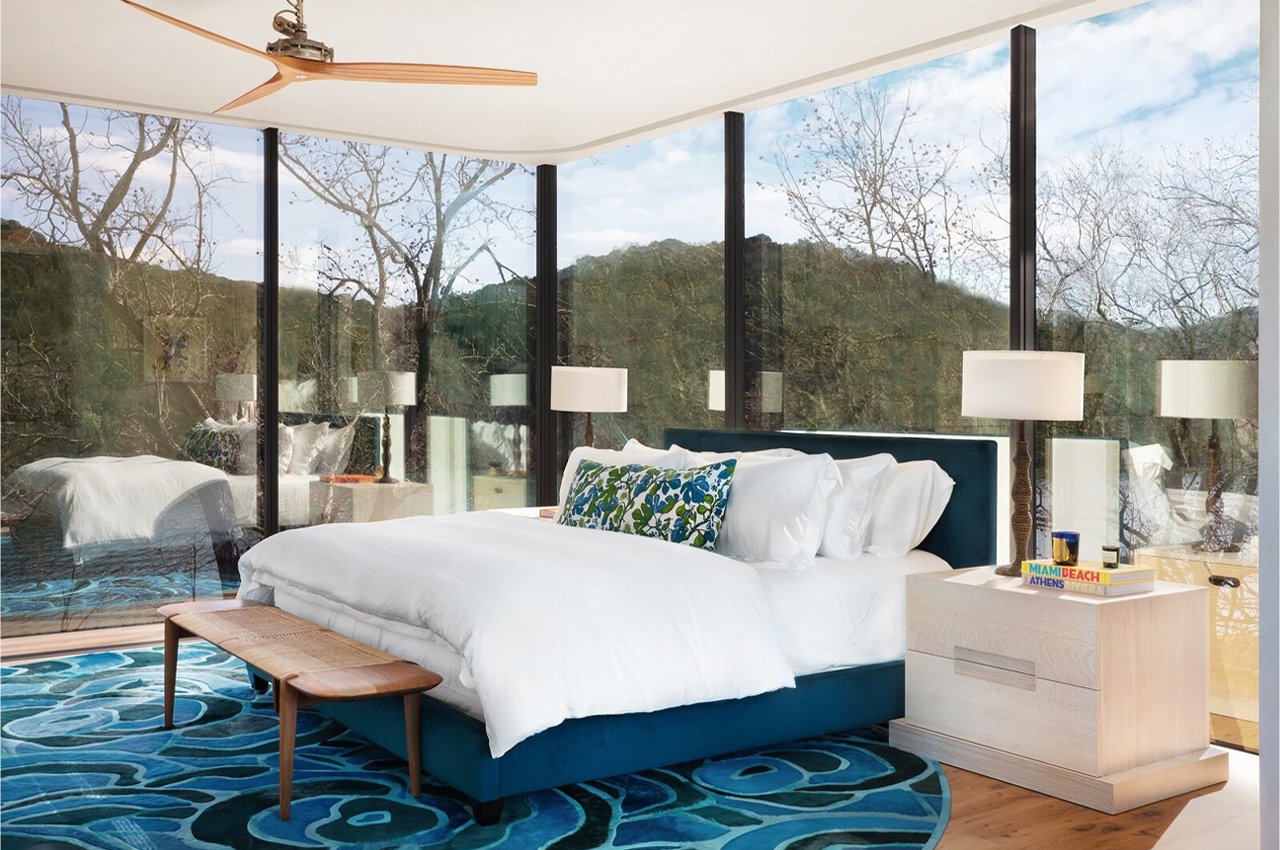 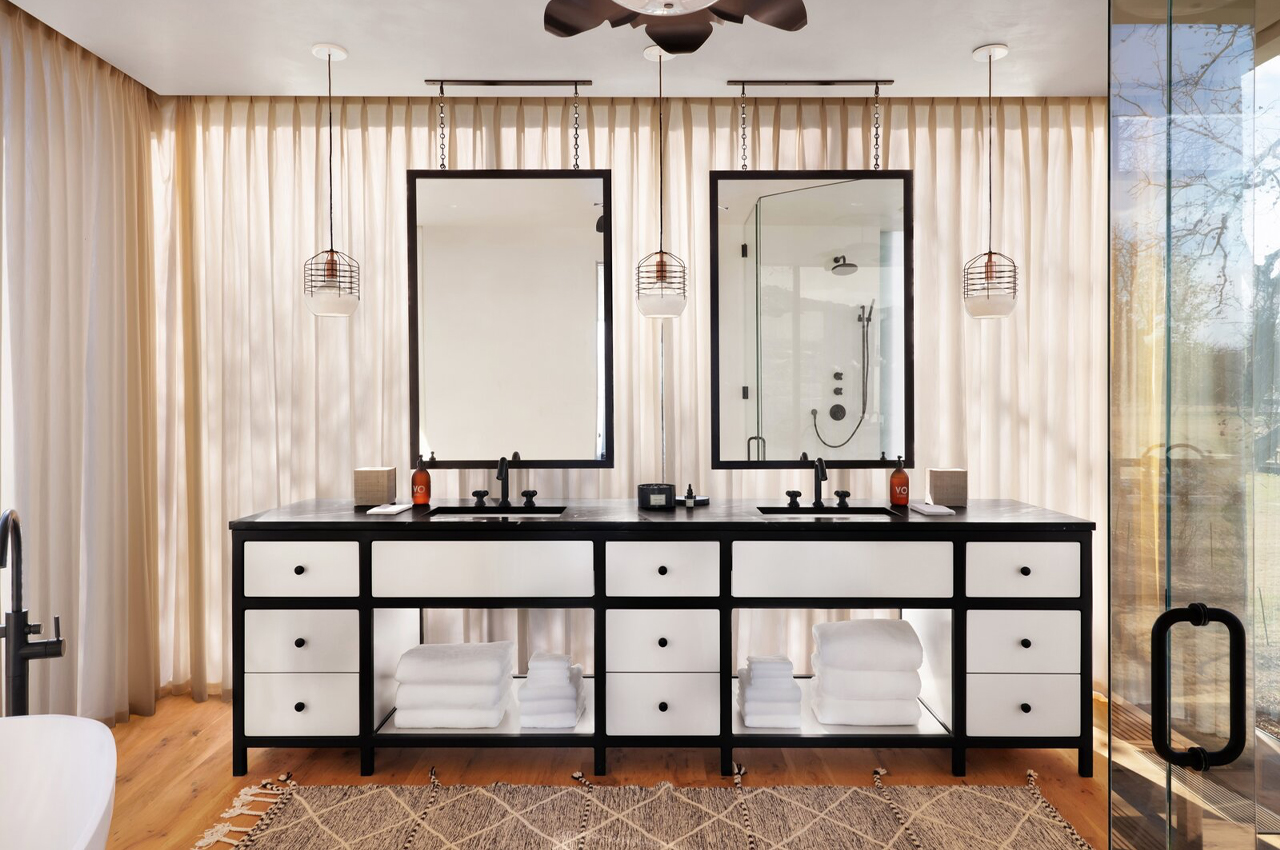 As project manager Jeremy Ristau notes, “We wanted the Tree House to feel special, while also keeping it relatable in color palette and materials to their main residence since they are in close proximity and it will ultimately feel like one cohesive estate.” 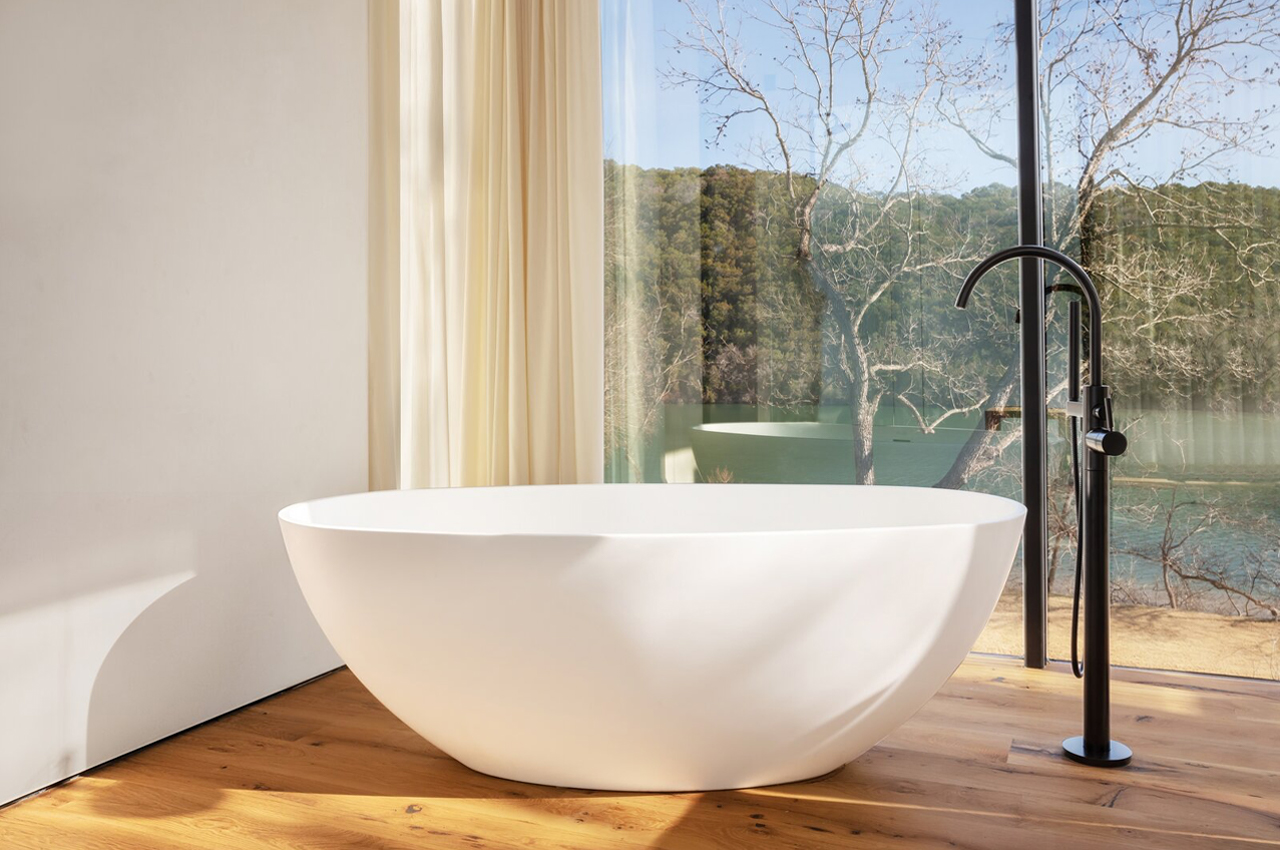 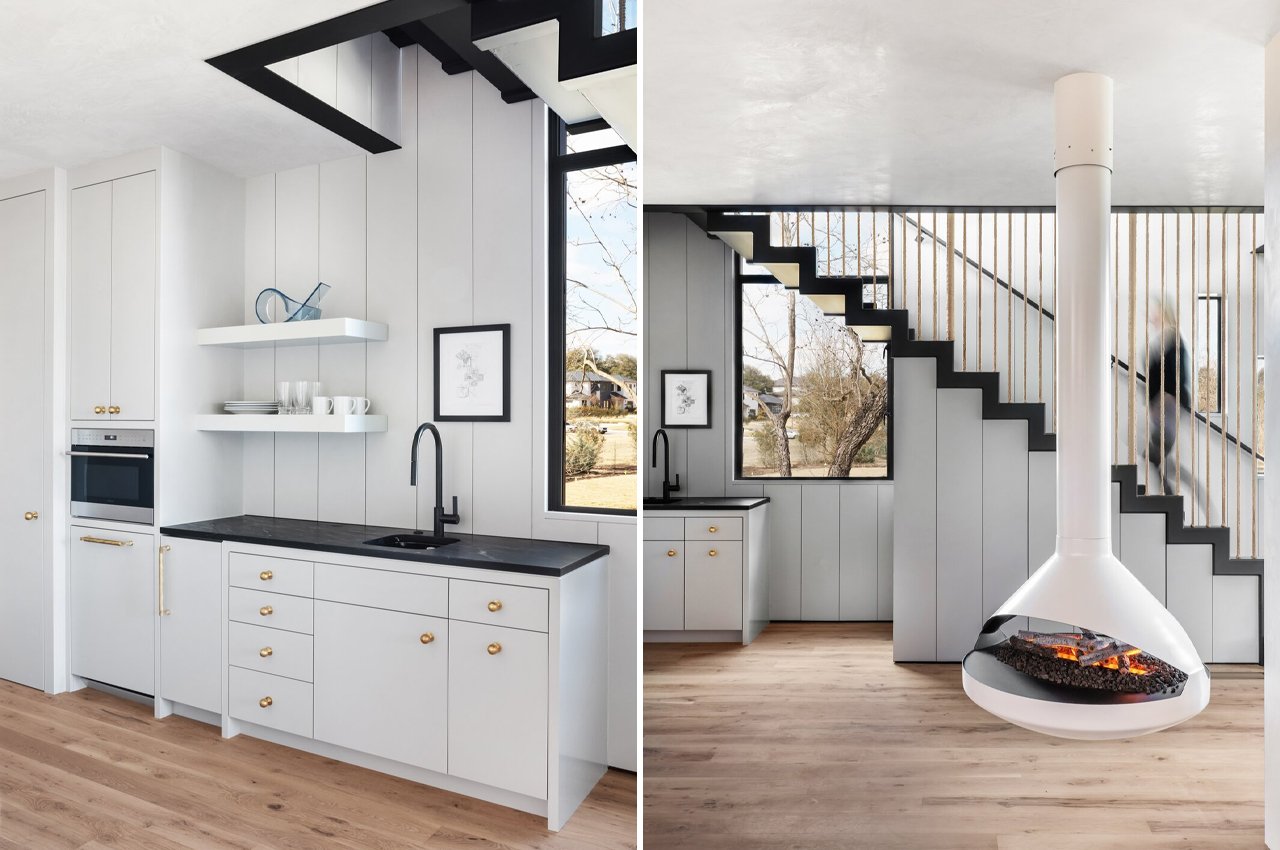 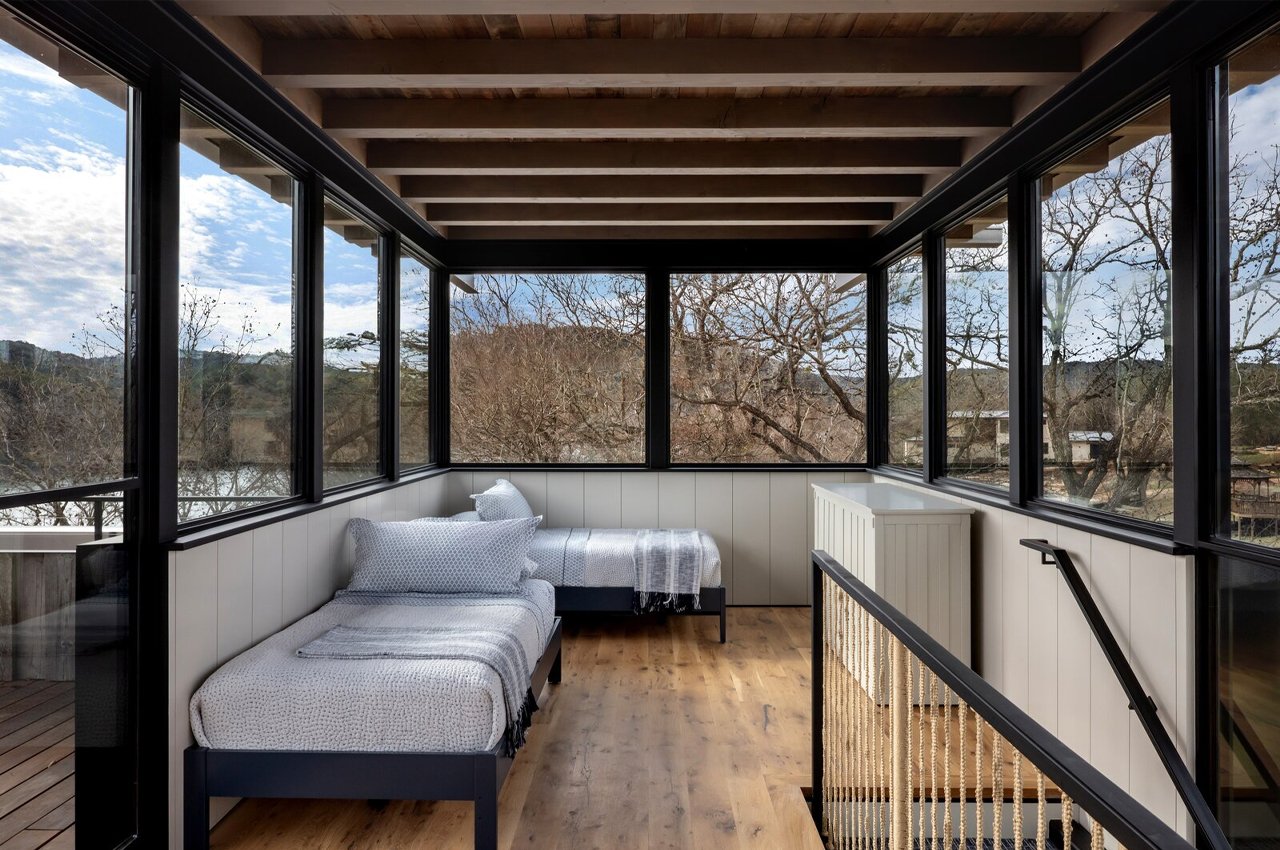 Giving the illusion that trees and brush are closer than they may appear, the mirrors root the Tree House firmly in its natural surroundings. Even the underbelly of the Tree House is anchored with a large mirror to really send home the Tree House’s floating look. 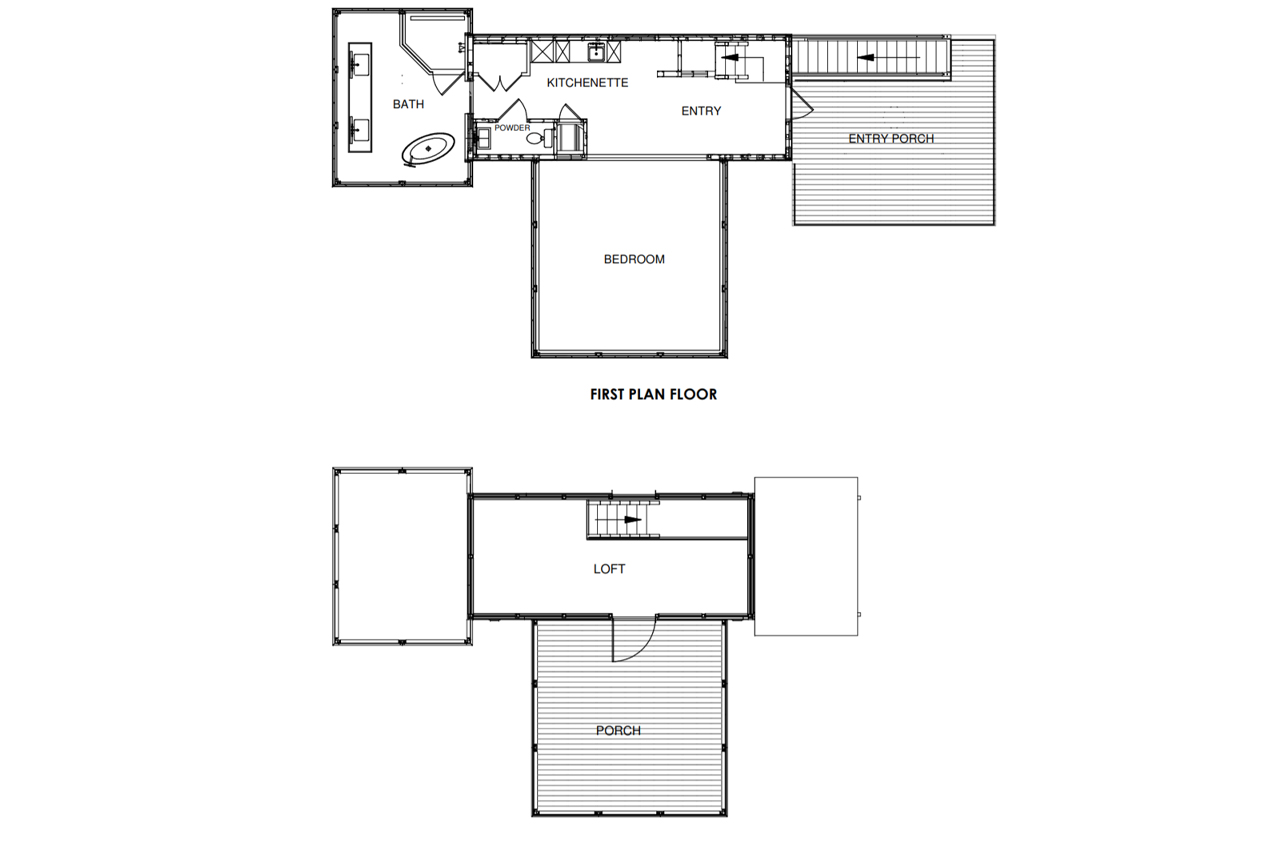 Taking only around five days to reach its final form, Ryan Street asked the Escobedo Group, a local construction company, to develop a panelized prefabricated system called Dario. Constructed offsite, the panels were transported from the Escobedo Group’s factory to the Tree House, avoiding excess waste and streamlining the home’s assembly process.

Equipped with plumbing and electricity rooted in the home’s steel stilt supports, while the exterior might appear ruggedly refined, the interior is as comfortable as any hotel. With a single bedroom located on the home’s first floor and a loft bedroom with two beds, the Tree House functions as a getaway for the family of four and a whimsical house for guests. 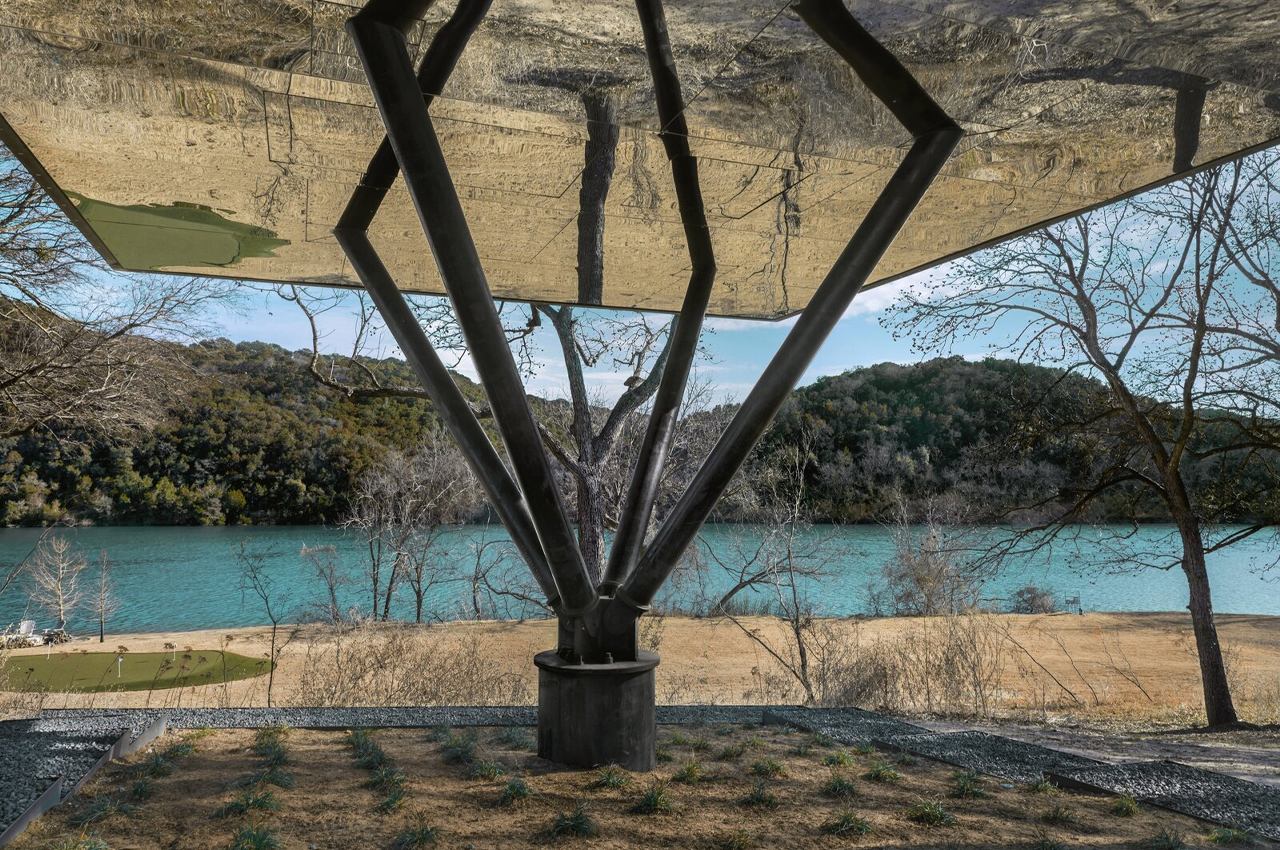 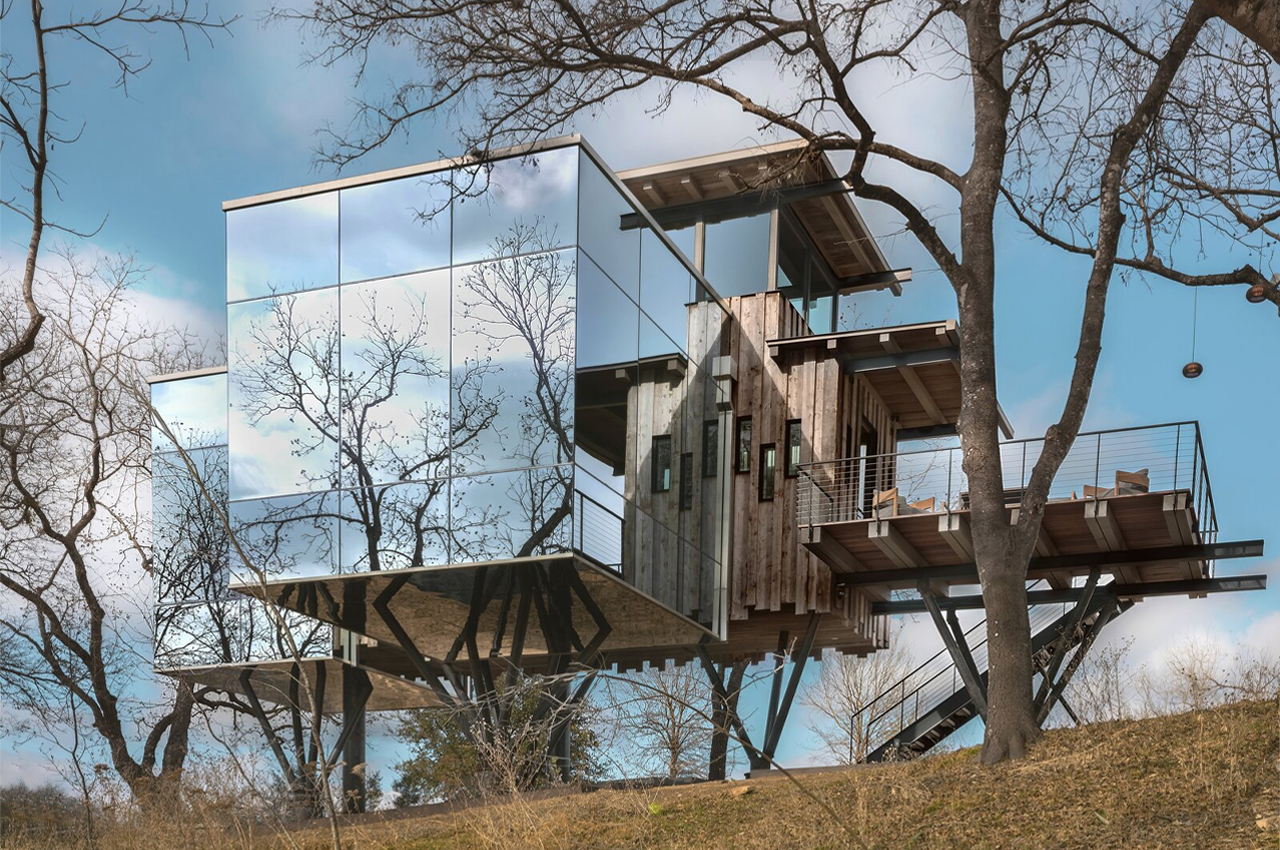 This transforming robotic furniture going from bed to home office desk is the 2021 investment we need!

This past year has seen some pretty innovative work from home office solutions. Space-saving answers to tight office corners like desk setups that double as…

I’m Going Behind The Stove

EU VEGN DAVO PIGNA is Rhaeto-Romanic and can be translated literally as “I am going behind the stove.” This expression is used when parting and…

Lime Studio will be showcasing new designs at the Salone Satellite, Milan from 16th-21st April 2008. They will be showing a range of furniture that…