You might confuse it for a miniature hypercar at the first glance, but that wouldn’t be your fault… Novabot is easily the sexiest lawnmower I’ve seen in my lifetime. Styled with automotive cues that could share the stage with leading sportscars, Novabot is a new-age autonomously operating lawnmower that also doubles up as a security robot. 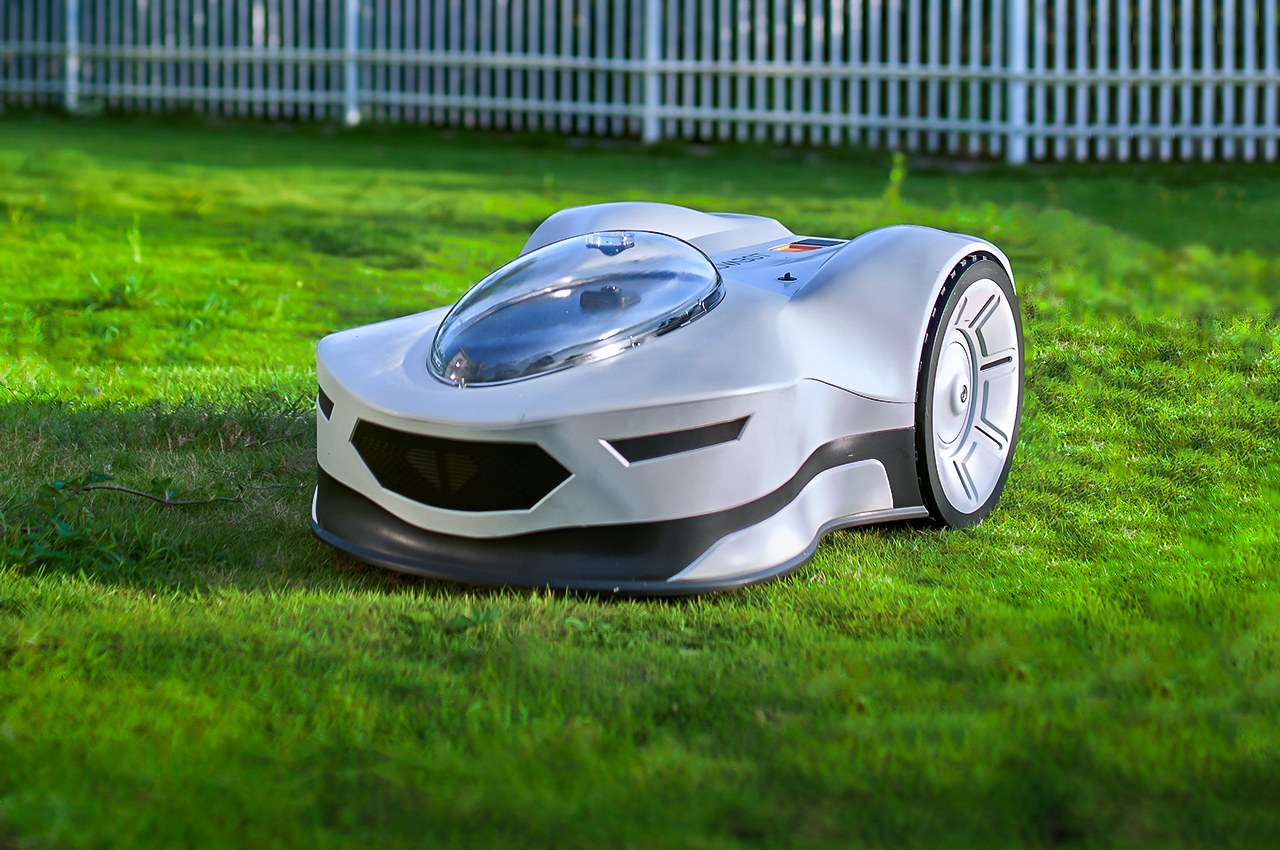 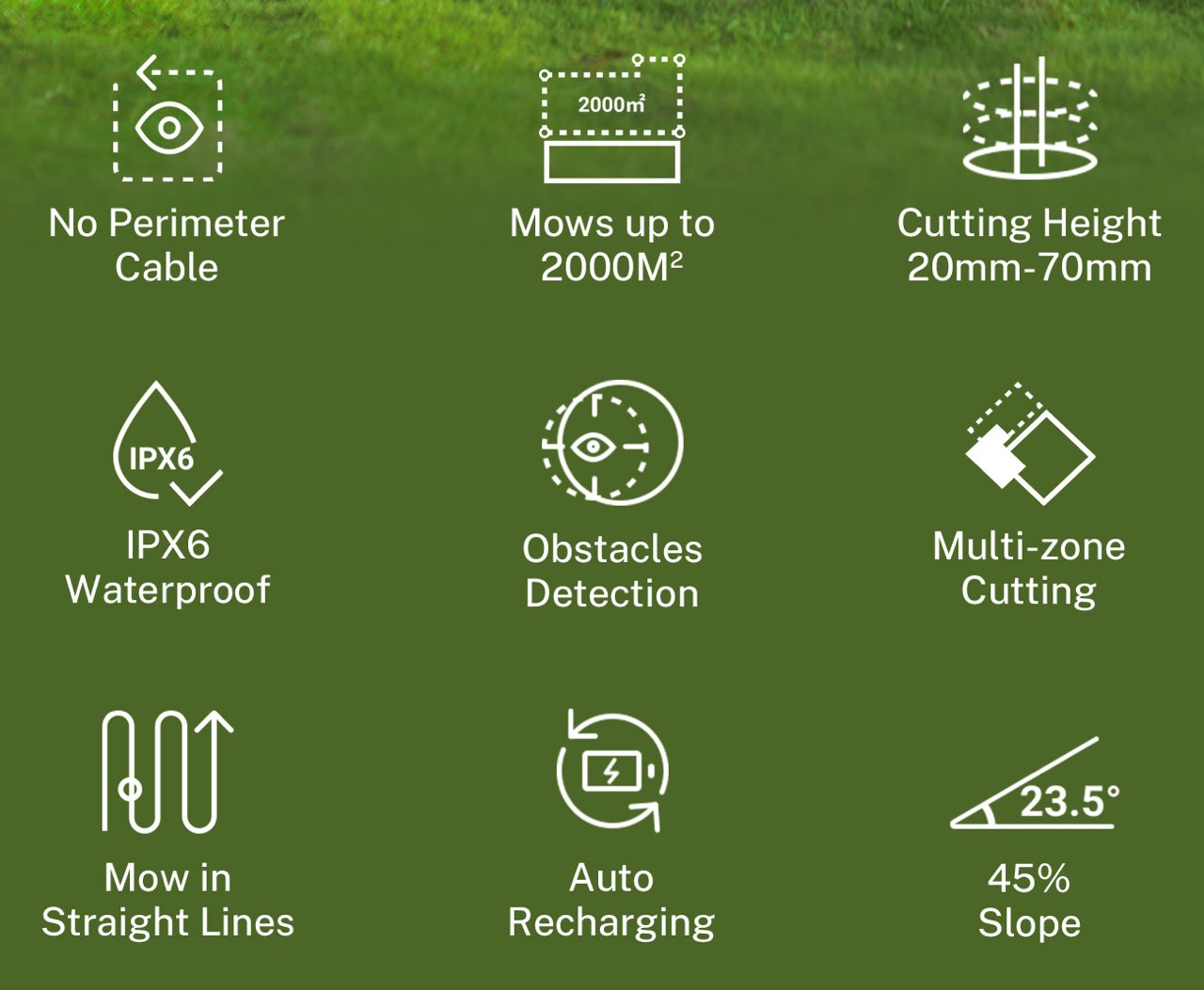 I’ve long proclaimed that the best and most immediate application for self-driving tech is to have it run on autonomous lawnmowers, which are, roughly speaking, just smaller cars. Lawnmowers present the perfect opportunity to develop, test, and refine AI-based driving systems, and that’s precisely what Novabot does, in a car-shaped design no less! The lawnmower comes with a whole slew of sensors on the front and a 360° HD camera on the ‘windshield’ of the appliance, allowing it to self-navigate on your lawn or outdoor premises. The bot’s homegrown NovaVision™ system allows it to detect and recognize its location, the surface it’s operating on, and objects around it. Without the need of perimeter cables or guides, Novabot can drive around the premises, alternating between grass and land (large offroad tires allow it to work on concrete, brick, pebbles, and even cobblestone paths) and even working on uneven surfaces and inclines, while intelligently avoiding humans, pets, obstacles, fences, and vehicles… and yes, even dog poop. 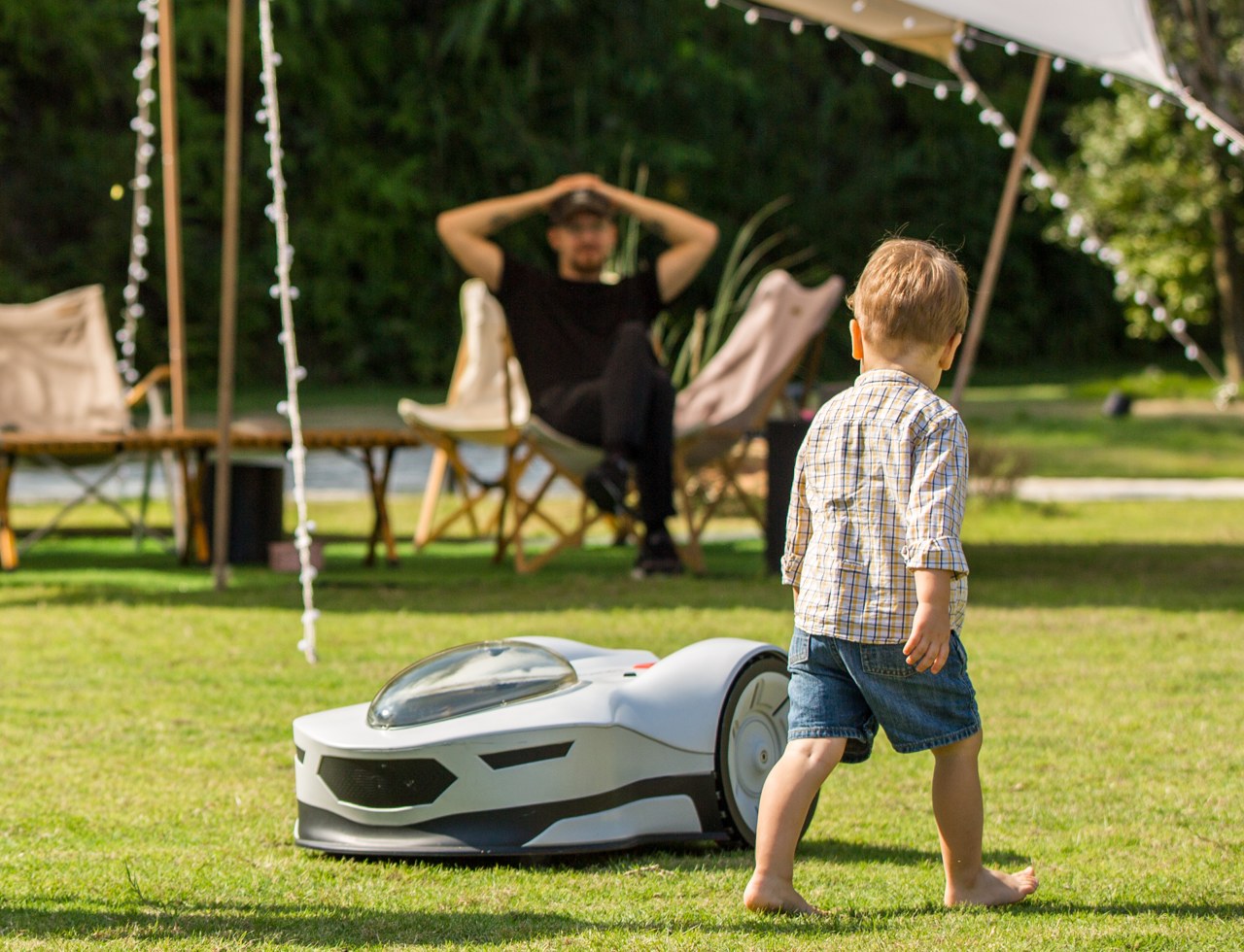 Operated through its native app, Novabot takes care of your lawn, by mowing the grass and patrolling your property. Inside the robot sits Novabot’s brain, its Coremind™ algorithm, which gives it its strong AI chops, powered by a lithium-ion battery cells that sit in the back. The mower’s wheels are powered by quiet yet high-torque brushless motors that allow Novabot to operate on 45% inclined slopes, and the mower lets you choose how tall or short you want your grass chopped. Novabot’s Coremind™ algorithm allows it to effectively plot out your entire property, determining different lawns, zones, and pathways. It then creates its own route and routine to ensure that the lawns are efficiently mowed to perfection. While on its route, the bot can easily differentiate between separate lawns, allowing you to choose which length you want the grass to be in each zone, and the mower will even intelligently avoid shrubs, flowerbeds, and vegetable plots. Novabot gets through roughly 1/4th of an acre on a full charge, and will even autonomously head back to its charging dock when it’s running low on power… plus, it’s built to be IPX6 waterproof, which means you can even hose the blades down every couple of days with a garden hose.

The app gives you control over how your Novabot operates. Its easy 3-step operation lets you quickly deploy the bot whenever you need. The in-app controls let you manage different zones within your lawn and even outline no-go zones. You can set a schedule for your Novabot, outlining daily tasks, etc. and the bot automatically figures out the best way to get the job done. When it runs low on charge, Novabot automatically makes its way back to its docking station to charge. 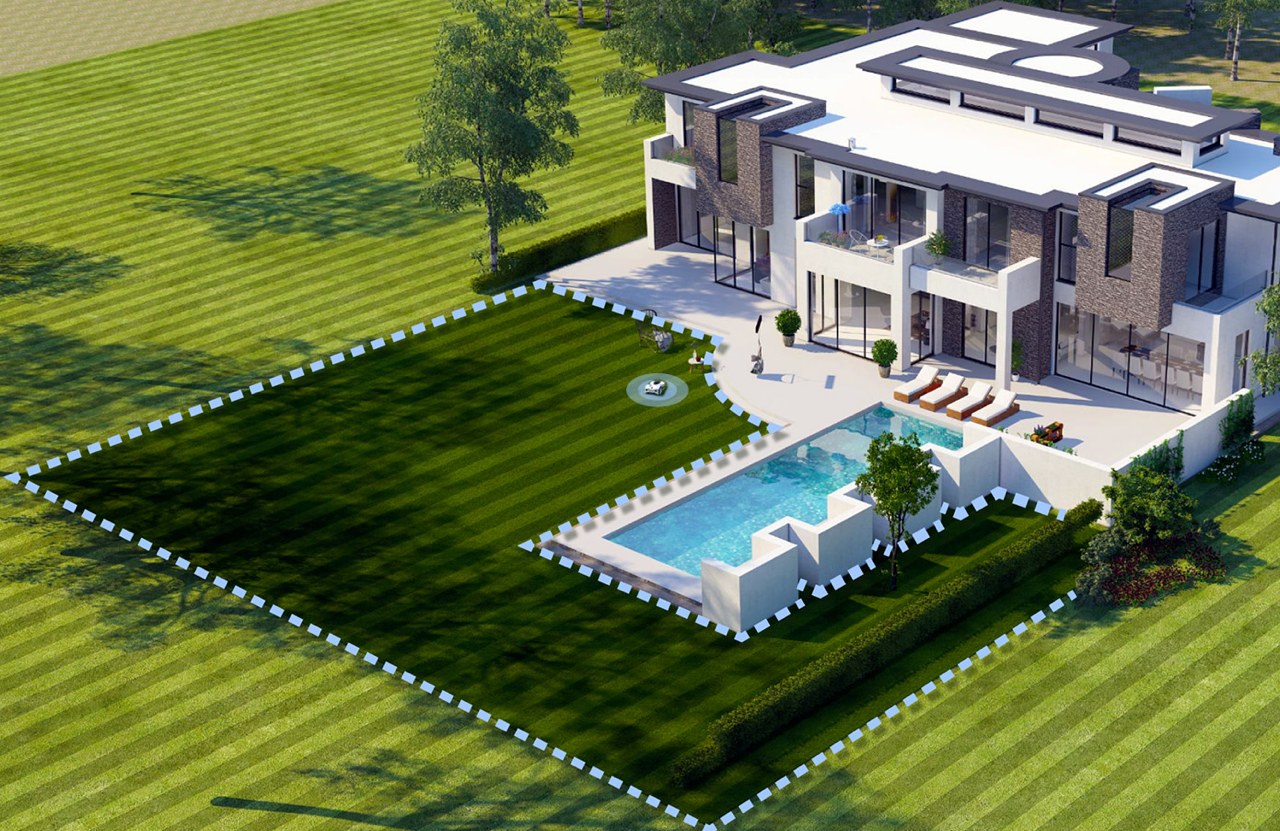 The RTK-GPS System with 0.8” level accuracy & NovaVision™ System detects the edges and is smart enough to trim the borders without wires or breaking a sweat. 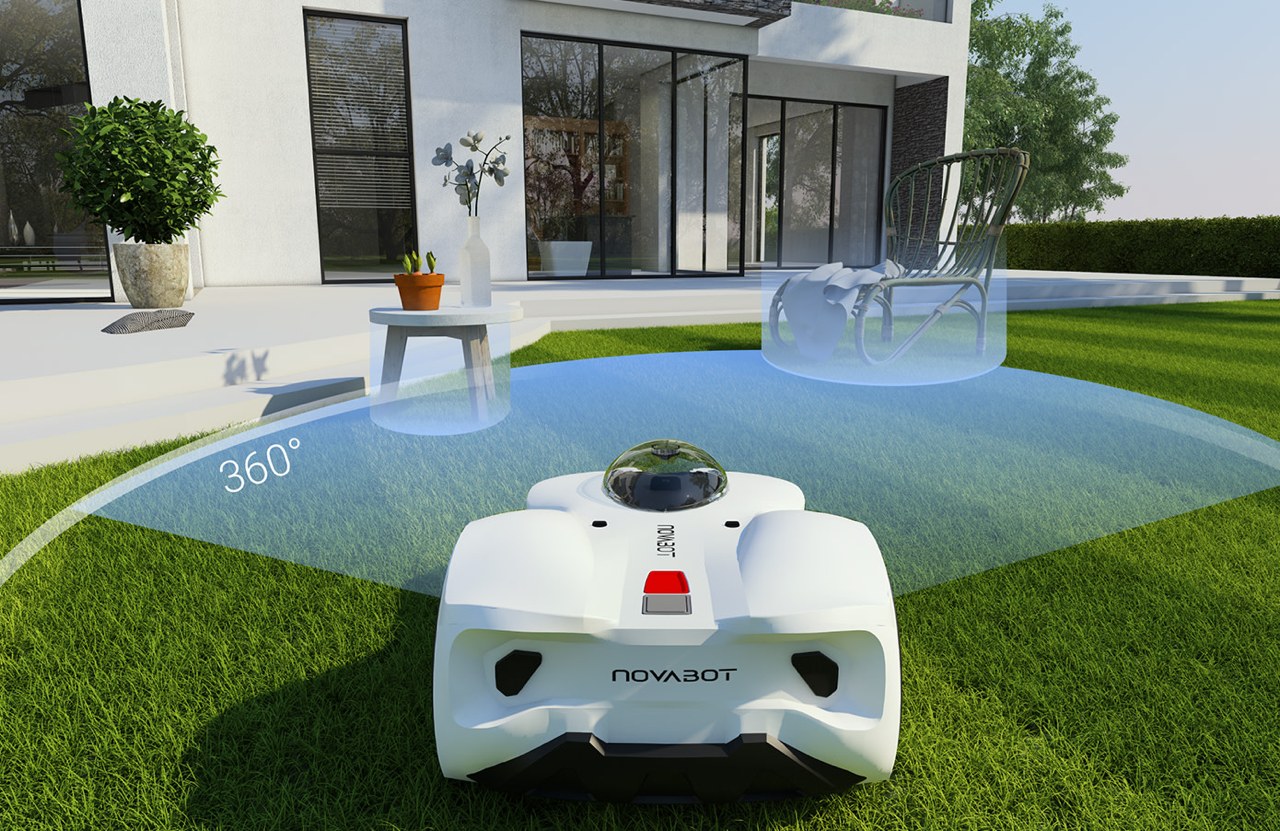 With a 360° HD Panoramic Camera and the new VSLAM Technology, Novabot is always aware of its surroundings. 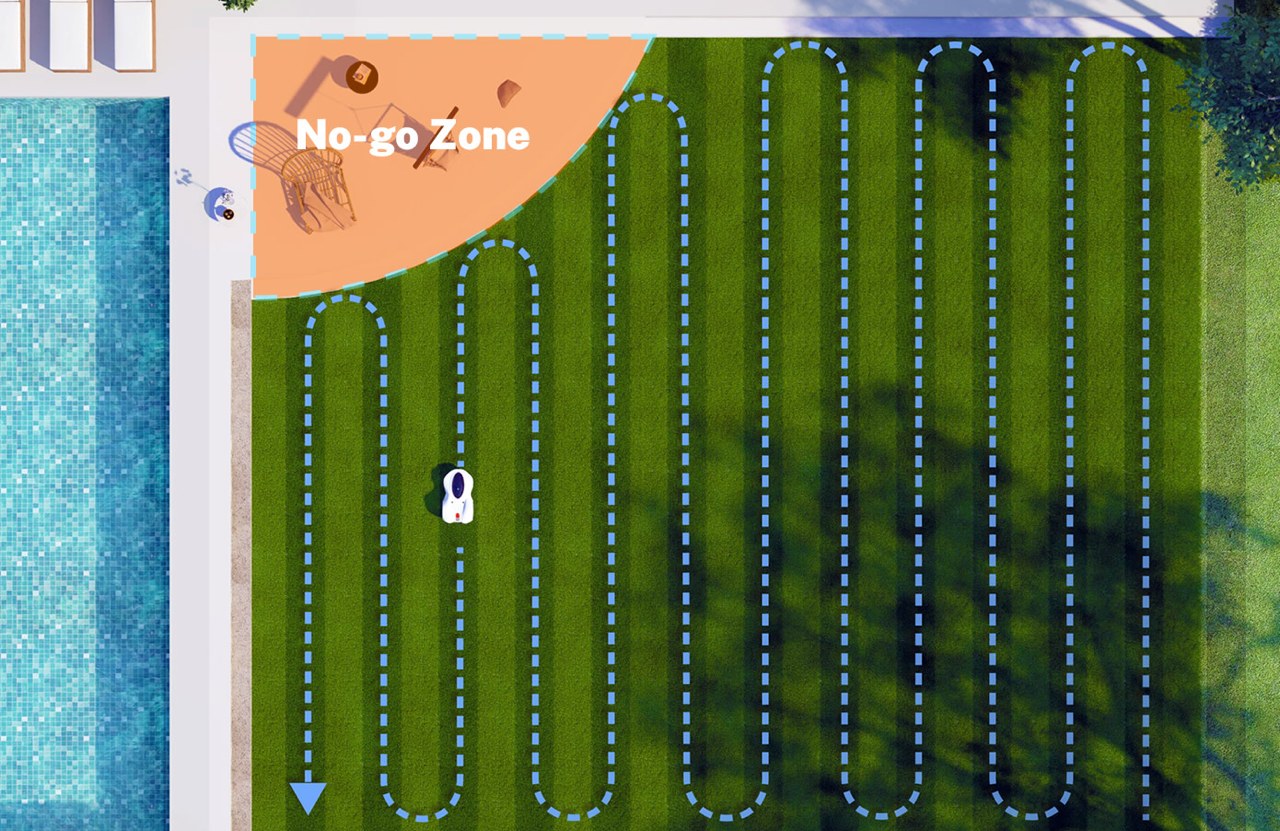 Uses Coremind™ Algorithm and 5 TOPS computing chip to cut the entire lawn in straight lines with 100% more efficiency and effectiveness. 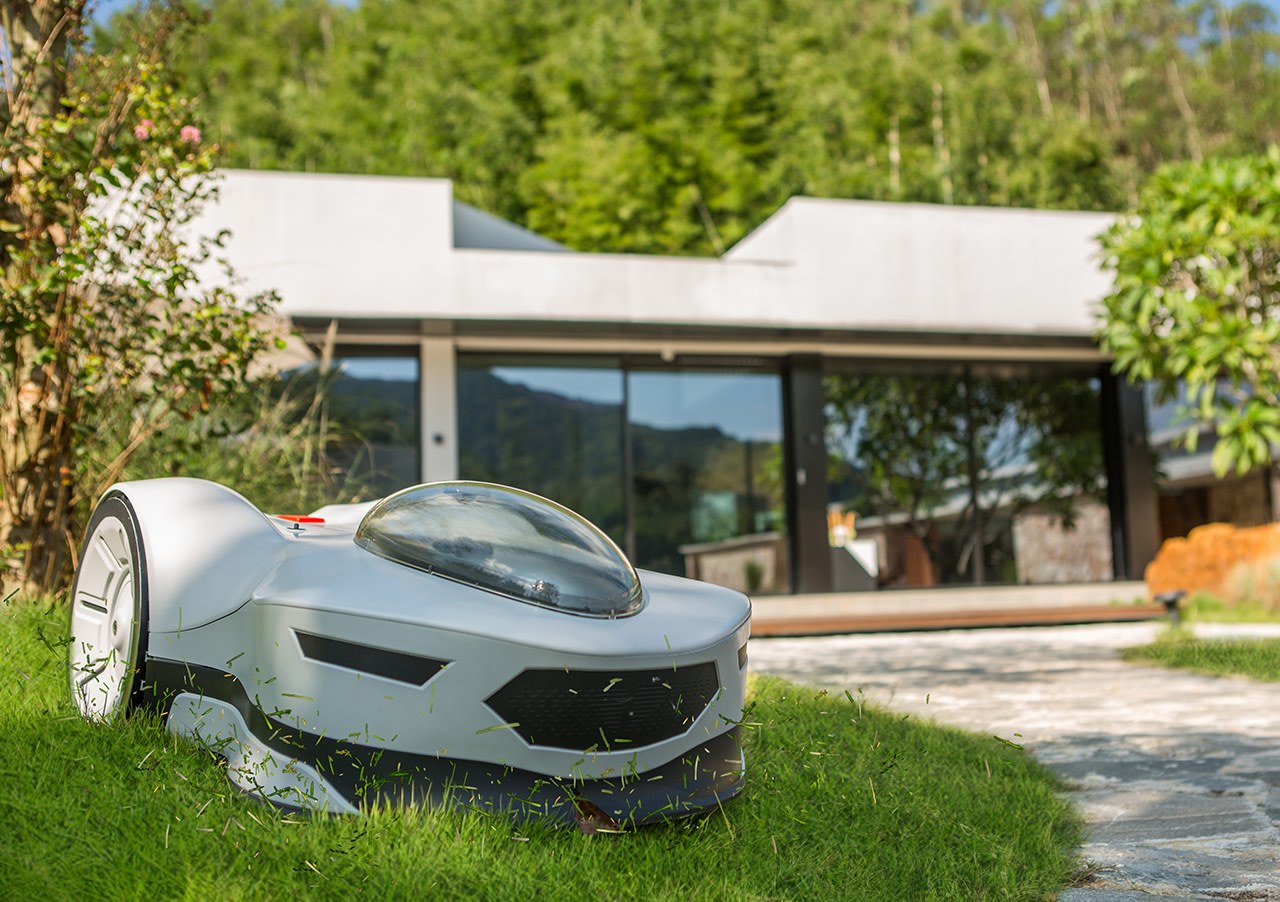 Climbs up to 45% slope and perfectly mows different areas of your lawn with ease. 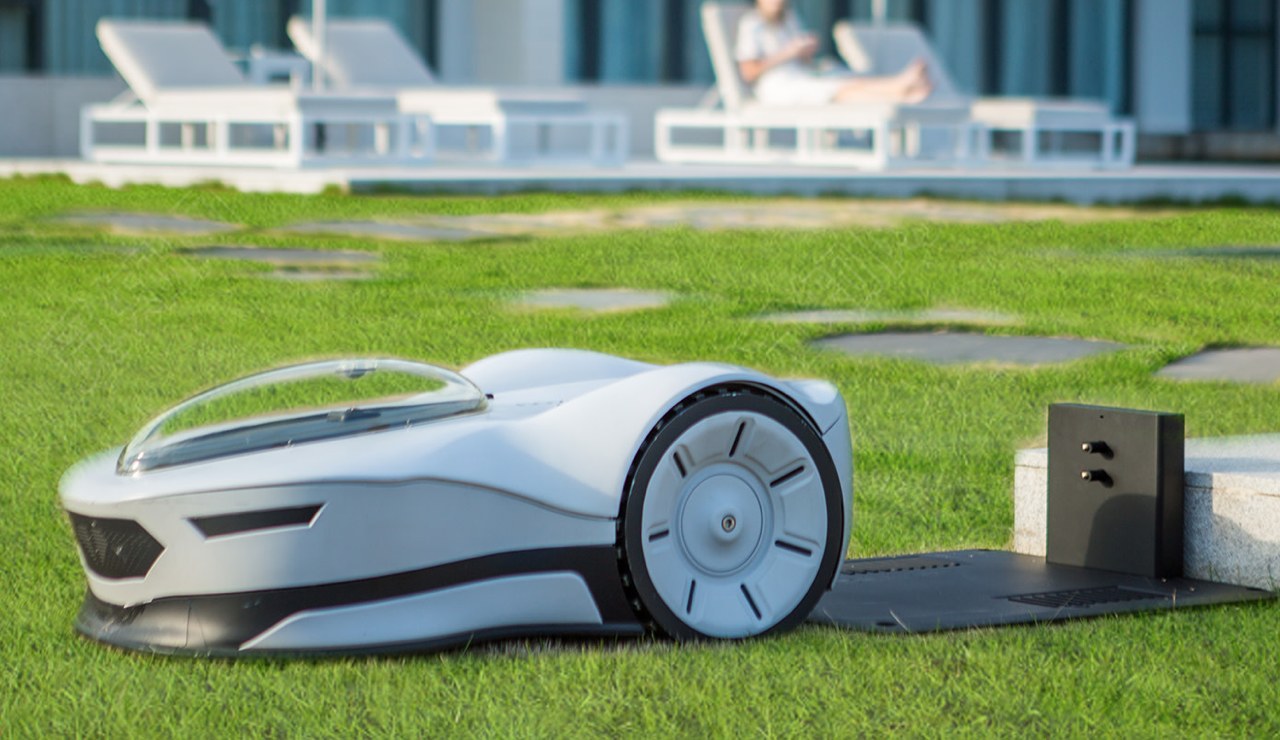 With a 7.5Ah lithium-ion battery, Novabot mows up to 2000m² and automatically returns to the charging base. 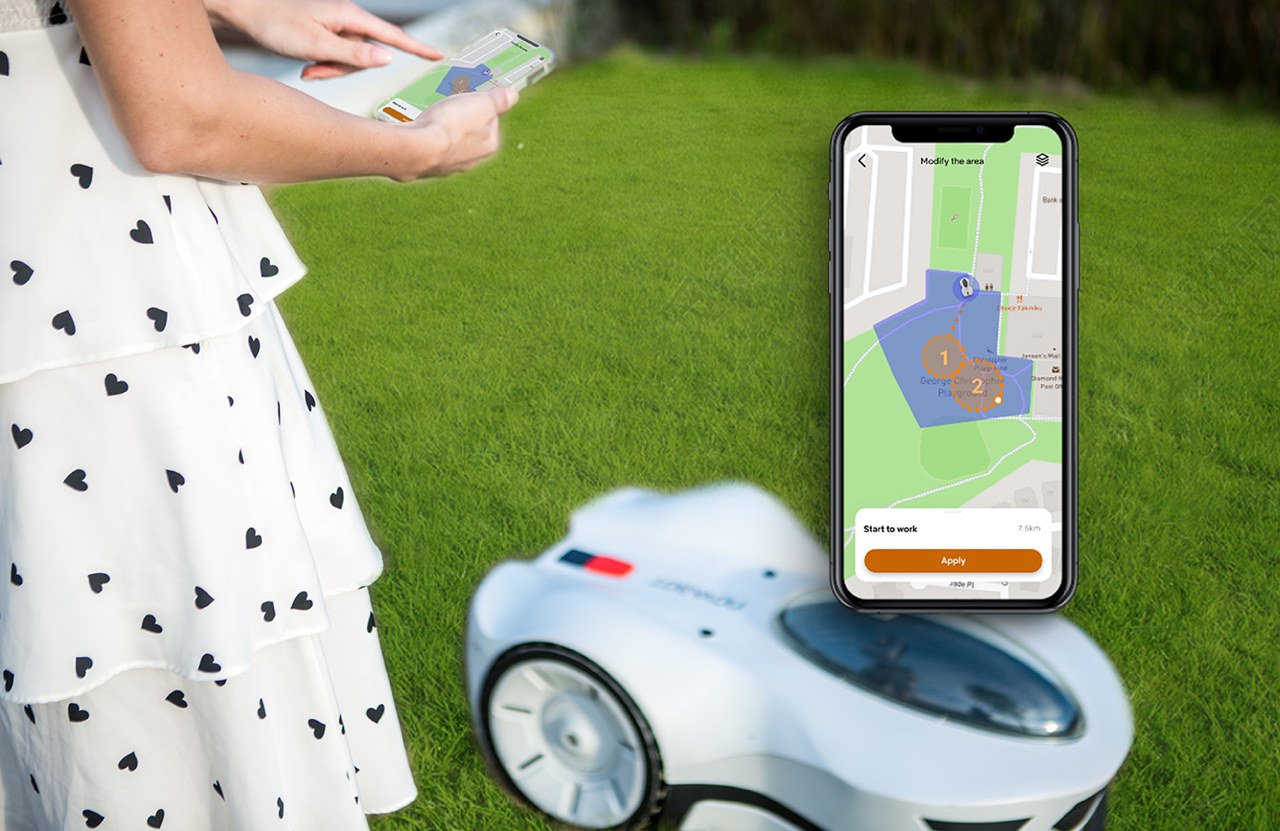 Personalize the settings and control the smart lawnmower anytime, anywhere with the Nova app.

The anti-theft system allows you to track the exact location of the Novabot.

The 360° panoramic view allows you to use the Novabot as a home security system to detect unknown objects, sudden movements, and abnormal activities and to alert you via the Nova app.

100% weatherproof. When it rains heavily, the humidity sensors will detect whether water pods are too large, and Novabot will avoid them and quickly return to the base.

IPX6 waterproof and made with ABS shell material, Novabot is easy to clean. 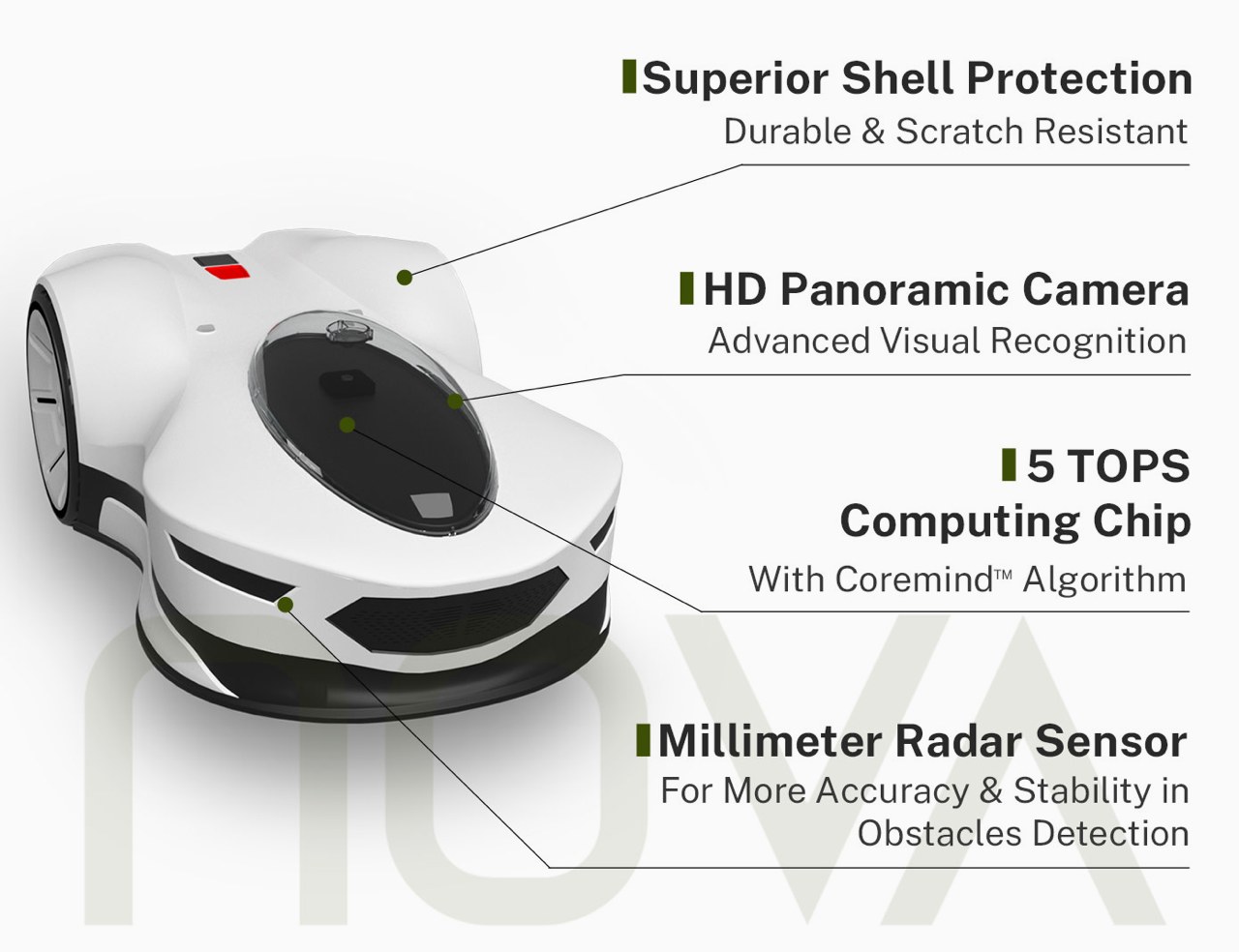 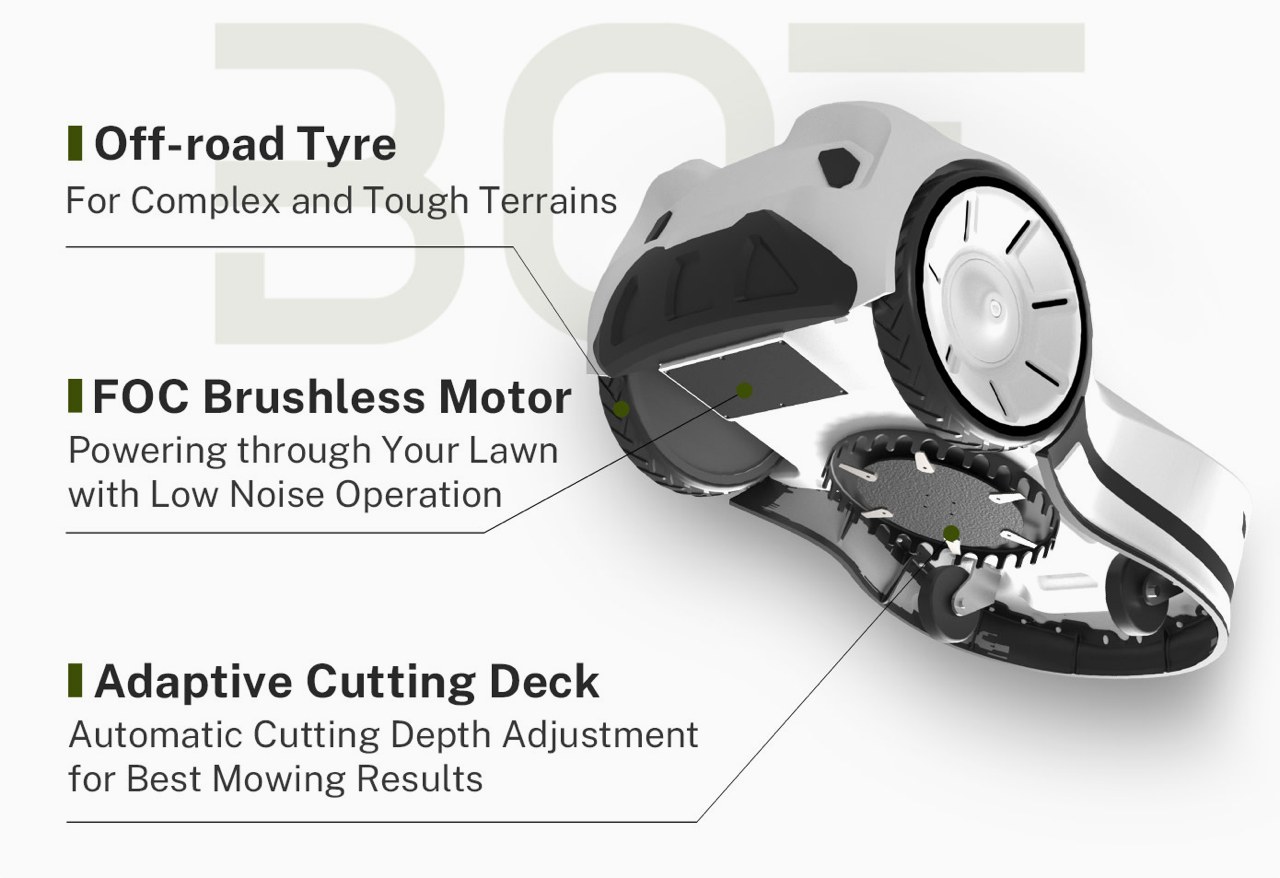 As impressive as its specs and capabilities are (after all Novabot is a culmination of 42 years’ worth of R&D at GRASP Laboratory at the University of Pennsylvania), its design is quite the looker too. Novabot ditches the notion that a self-driving mower should look anything like a beer-cooler with wheels, or a large Roomba. The bot takes on the aesthetic of a car, looking more like an RC automobile that runs along your property (the model looks significantly larger in the video, although the version shipping to backers will be more compact), maintaining and guarding it. I have to admit, it definitely takes the appliance-ish nature out of the robot and makes it look like a future-forward gardening gadget that’s sure to impress your guests… both the invited and the uninvited kinds! 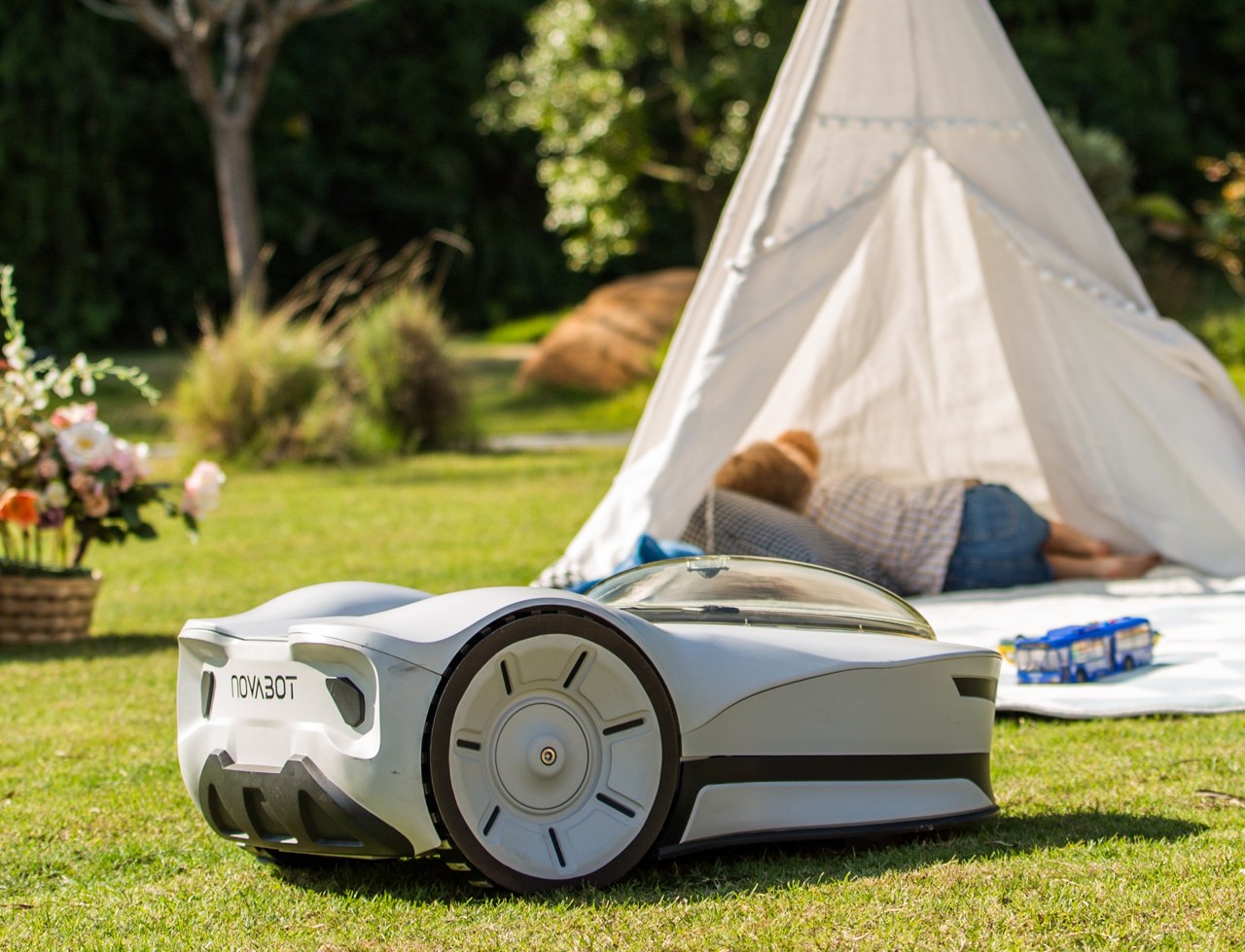 Novabot ships in two variants – a Standard for $1299 and a Pro for $1599 (making it significantly cheaper than other robot lawnmowers from companies like Husqvarna), and comes with a 3-year warranty. Novabot’s companion app is free to use, offers IFTTT and Alexa integration, is end-to-end encrypted, and stores data locally instead of on a remote cloud server for added safety. As is with most crowdfunded projects, the pledges go towards developing, refining, testing, and mass-producing the product. Given its complex design, broad use-case, and AI-driven nature, Novabot’s shipping begins around June 2022.

What makes an iPhone an iPhone? Of course, only Apple can really tell, but there are a number of design cues that easily identify a…

There have been a few electric proposals for future Le Mans races but this Pagani is one of the first that harnesses hydrogen power! Called…