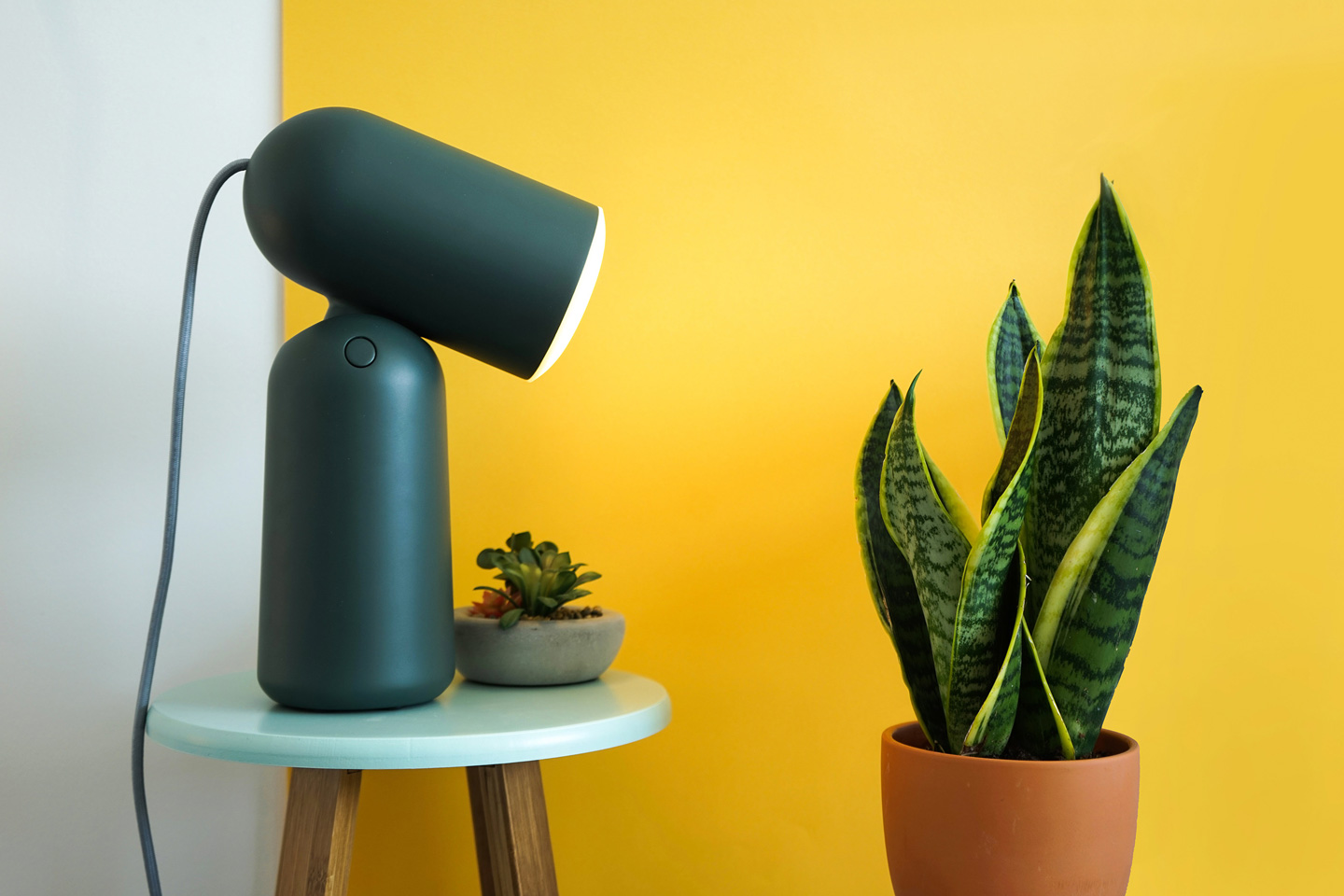 We’re here with inspirational lighting designs to help ‘spark’ your imagination! Perhaps the most ‘lit’ amongst the A’ Design Award’s multiple categories, this list looks at winning designs from the past year, celebrating good design from the year gone by. The Italy-based A’ Design Awards and Competition have always tried to be more than an award, by creating a multi-disciplinary program that rewards designers while also creating an environment that helps designers grow their products as well as careers… And yes, you also win a shiny trophy.

Lighting Design forms just one of the various categories of the A’ Design Award and Competition, which spans the popular categories like Architecture, Packaging, and Consumer Electronics, as well as the obscure, lesser-known categories like Cybernetics, Prosumer Products, and Safety Apparel Design. The A’ Design Award’s ultimate goal is to be an umbrella that covers good design across all disciplines, which is why it has 100 different categories for submitting design projects, and 211 jury members (comprising academics, design professionals, and press members) from all around the world collectively judging the works. Winners of the A’ Design Award don’t just secure a trophy and a certificate, but receive an entire PR Campaign dedicated towards pushing their career, clout, and even their projects to newer heights. A’ Design Award’s winners and even its participants are included in its annual award book and business network, while additionally contributing to their country’s overall design ranking that paints a holistic picture of how design-centric and design-forward each country is.

The A’ Design Award is currently accepting entries for the 2022 edition of the award program, so go ahead and give your work and career the push it deserves!

Here are some of our favorite Lighting Design winners from the A’ Design Award & Competition 2021. If you have a potential lighting design project that you think is worthy of an award, Click here to register & participate in the A’ Design Awards 2022. 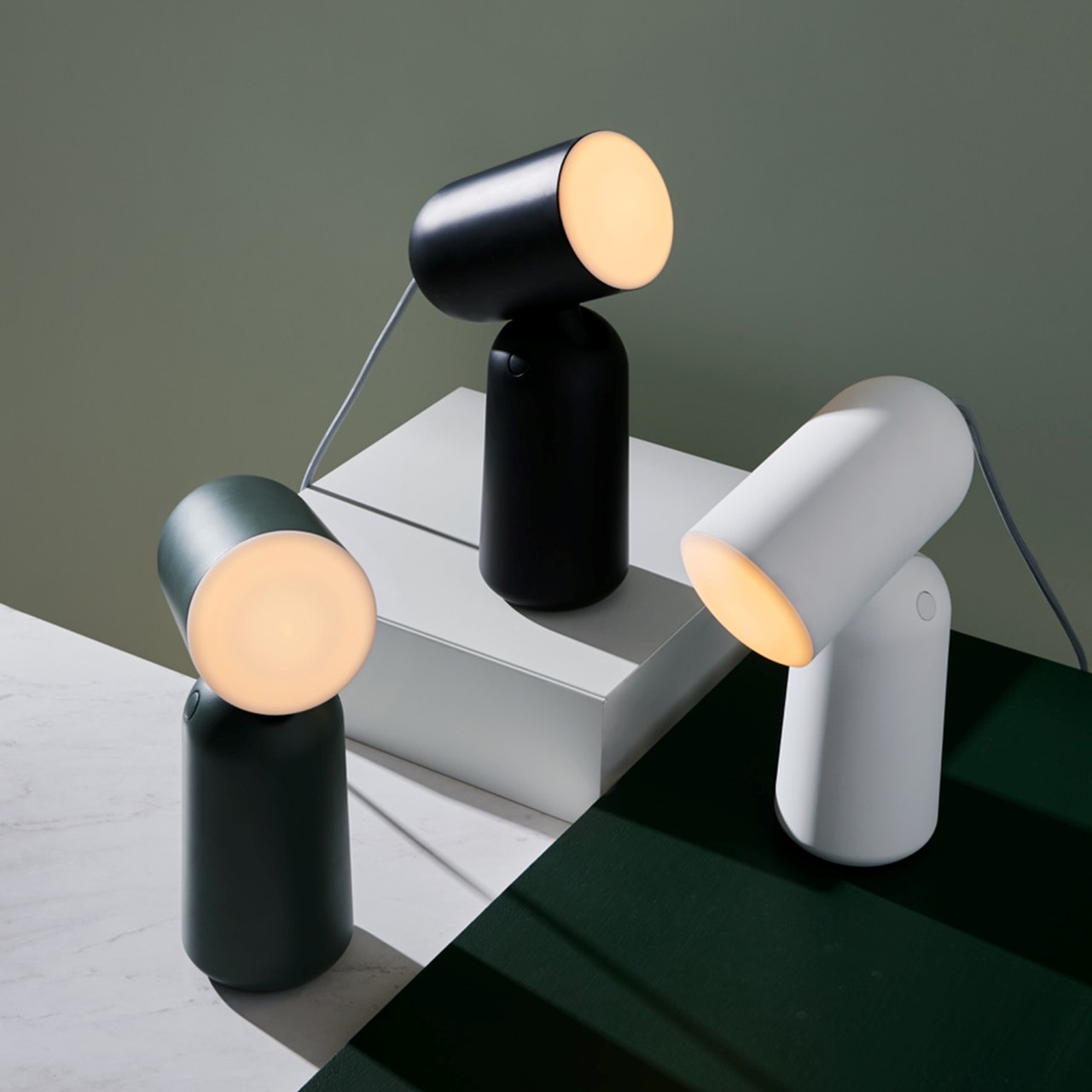 Modeled on the image of a friendly little ‘buddy’ that helps you by illuminating your workspace, the Buddy lamp sits obediently on your desk, with an adjustable ‘head’ that lets you ‘face’ the lamp anywhere. Designed by Mona Sharma for Gantri, the lamp is manufactured entirely using 3D printing techniques and Gantri’s proprietary Plant Polymers. The Buddy is “inspired by bold shapes and forms found in the Memphis design style, and the clean, minimal forms found in Scandinavian culture”, says Mona. “I wanted to create a companion for ‘thinking’ spaces, so quirky, playful cues in abstract photography and in nature gave it character.” 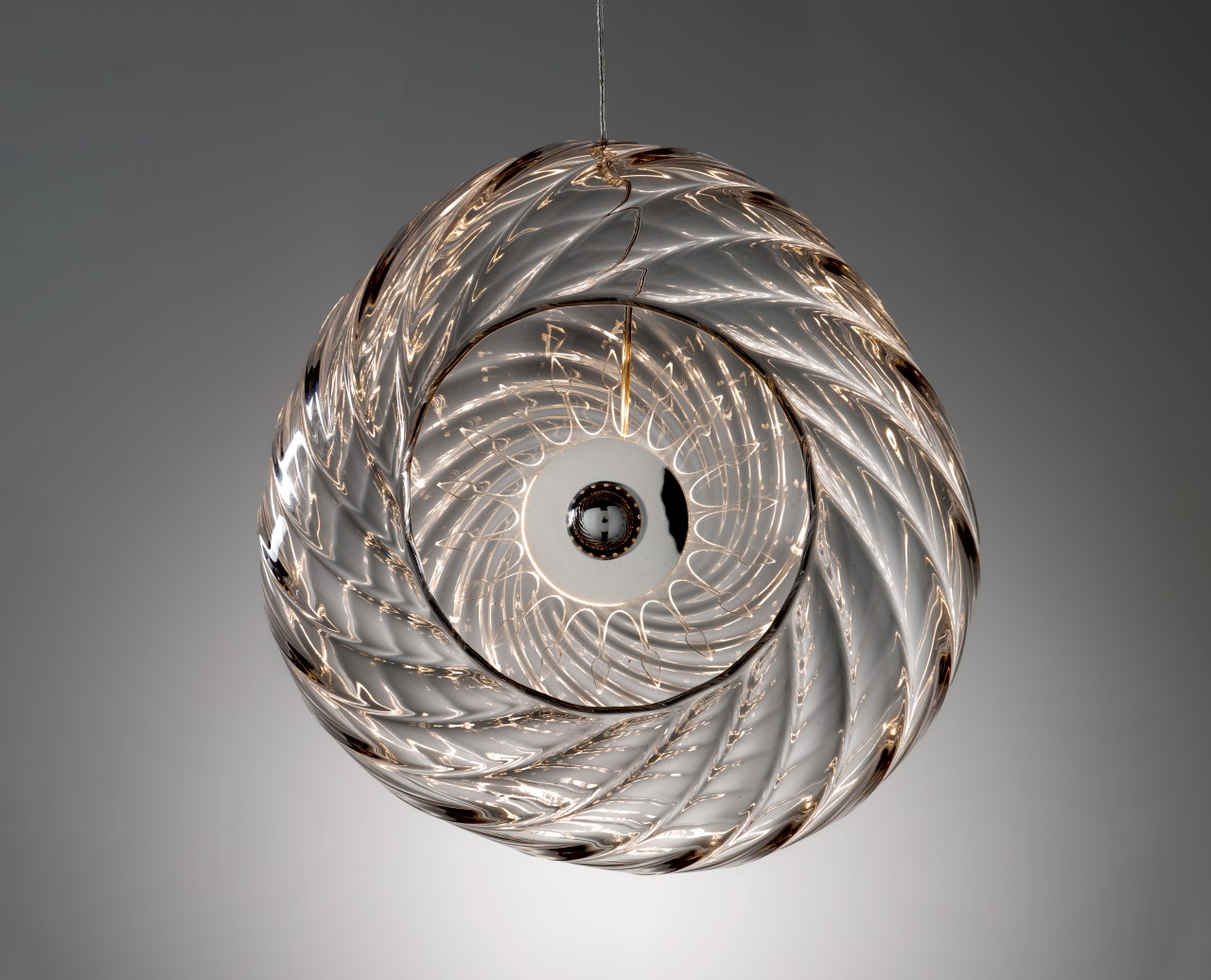 For context, Iestyn Davies is both a glassmaker and lighting designer… which explains the Translucence light’s origins, inspiration, and intricate design. The lamps are made entirely from scratch by hand using traditional hot glass techniques, which means each Translucence is completely bespoke and unique in its design. Davies wanted to create a lamp that had its roots in traditional techniques, instead of creating a form and slapping an LED bulb somewhere inside it. Instead, Translucence is a celebration of the relationship between light and refractive solids. The wavy design of the glass helps curve and guide the light, creating a shimmering halo that’s absolutely captivating and bordering on jewelry! 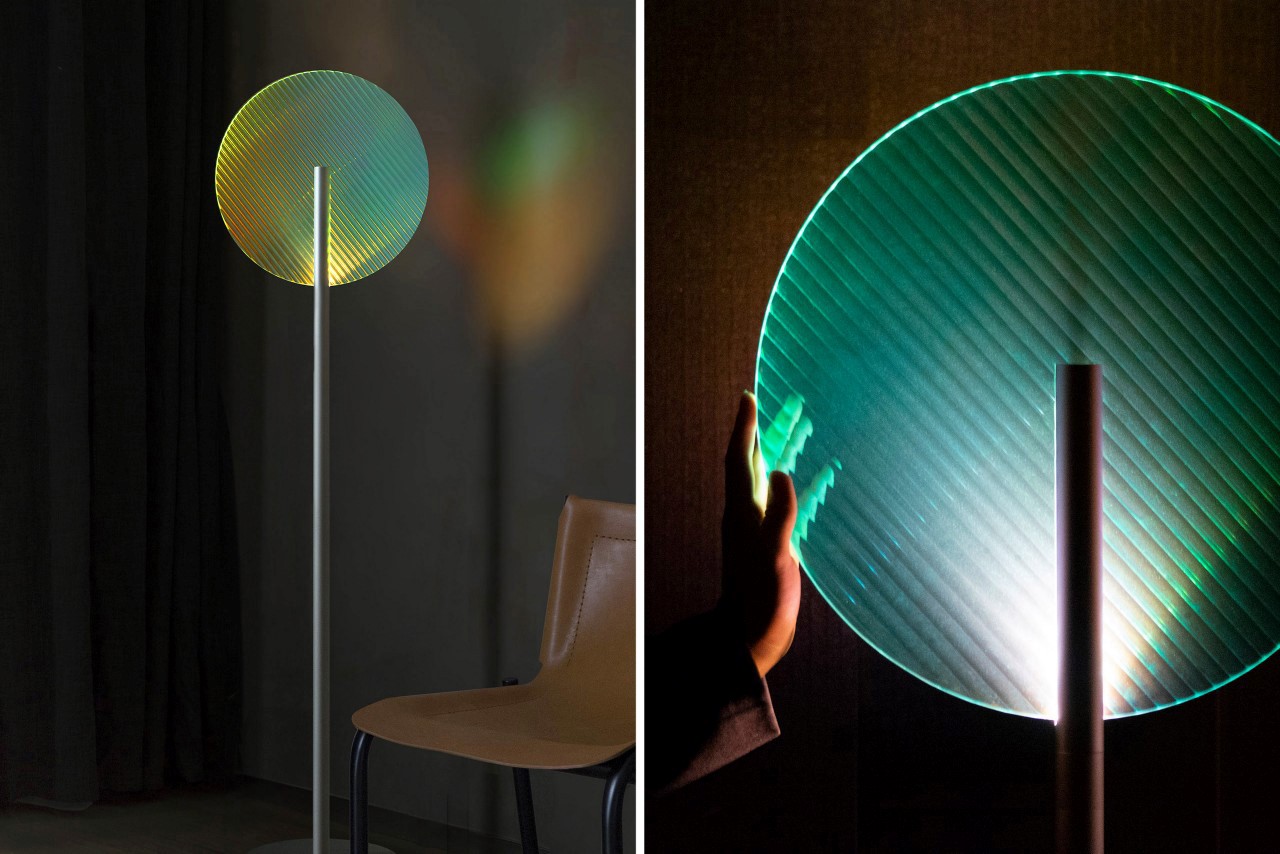 Yet another example of light and refractive solids, the Linear Refraction Floor Lamp uses a much more simplified design to achieve the same goal. The floor lamp literally consists of a vertical tube with a light source at its end, and a fluted glass sheet on the front of it, scattering light in different directions. The disc can be rotated by hand, and comes with a pearlescent coating that gives the light a shimmering rainbow effect too! 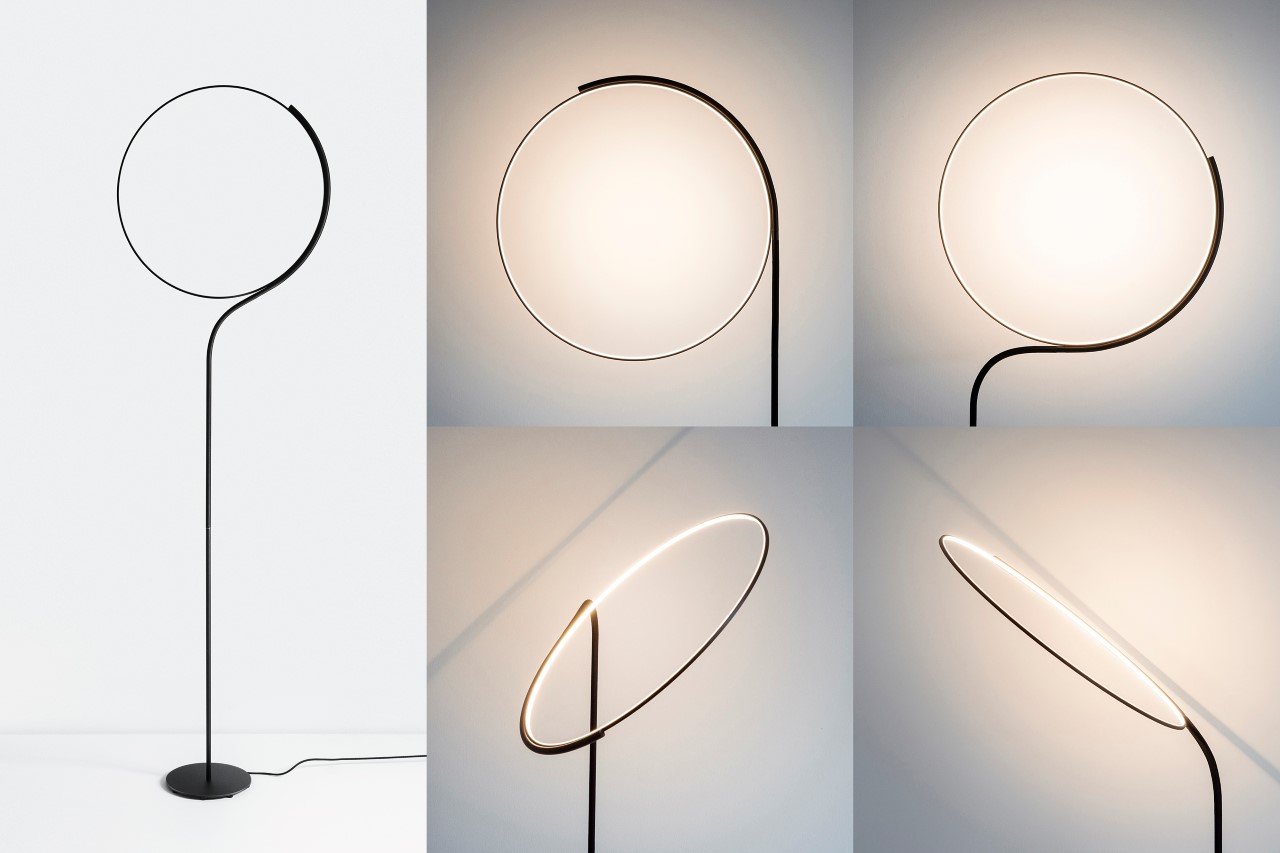 “My lamp concepts involve a certain amount of interaction in order to modify the way light is perceived”, says designer Dabi Robert. “This should encourage curiosity and human interaction with the light source, instead of just putting it somewhere to rest. I strive for a deeper relationship to the interior product”, he adds when describing the Cling, a uniquely minimalist floor lamp that’s relatively invisible to the eye until you start engaging with it. The lamp comes with a halo-shaped light attached to a flexible gooseneck base, which bends and flexes when you adjust the light’s position. Almost looking like a gymnast or someone doing yoga, the lamp contorts in all directions, helping you not just adjust the lighting, but also create a different design each time! 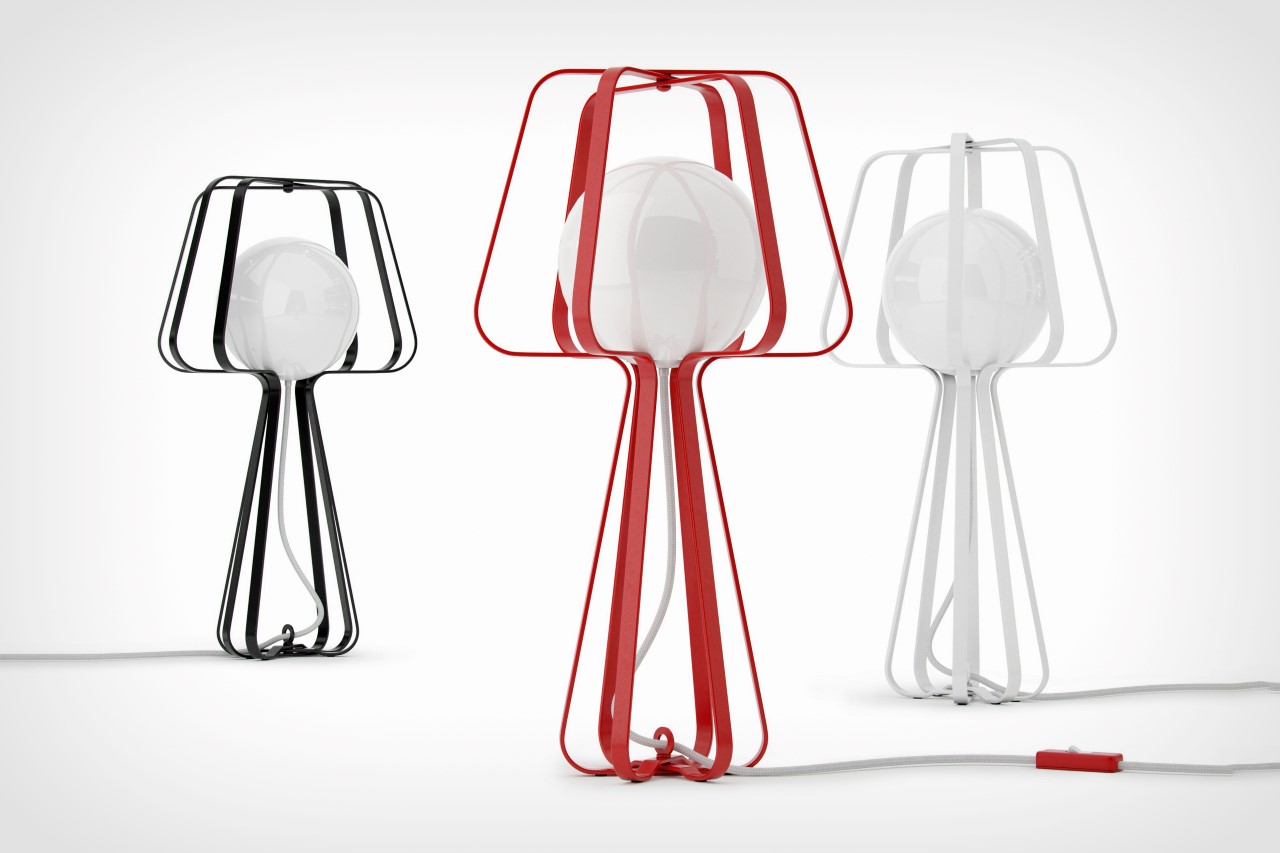 Created as a visual metaphor of a lamp, the Silhouettes Lamp by Alexey Danilin relies on the iconic shape of the lamp and shade to give his lighting design its character. Alexei says, “The main source of inspiration was the National Russian toy – Matryoshka, however, to be more precise, it was the principle of its design. It consists of one form, but of different scales. They can all create a common object.” The lamp uses a metal wire-like structure to create the impression of a lamp. The different metal silhouettes/outlines are pivoted around the center, allowing you to open the lamp out from a flat 2D design to a 3D form, with the actual lamp – an illuminated frosted glass orb – inside it. 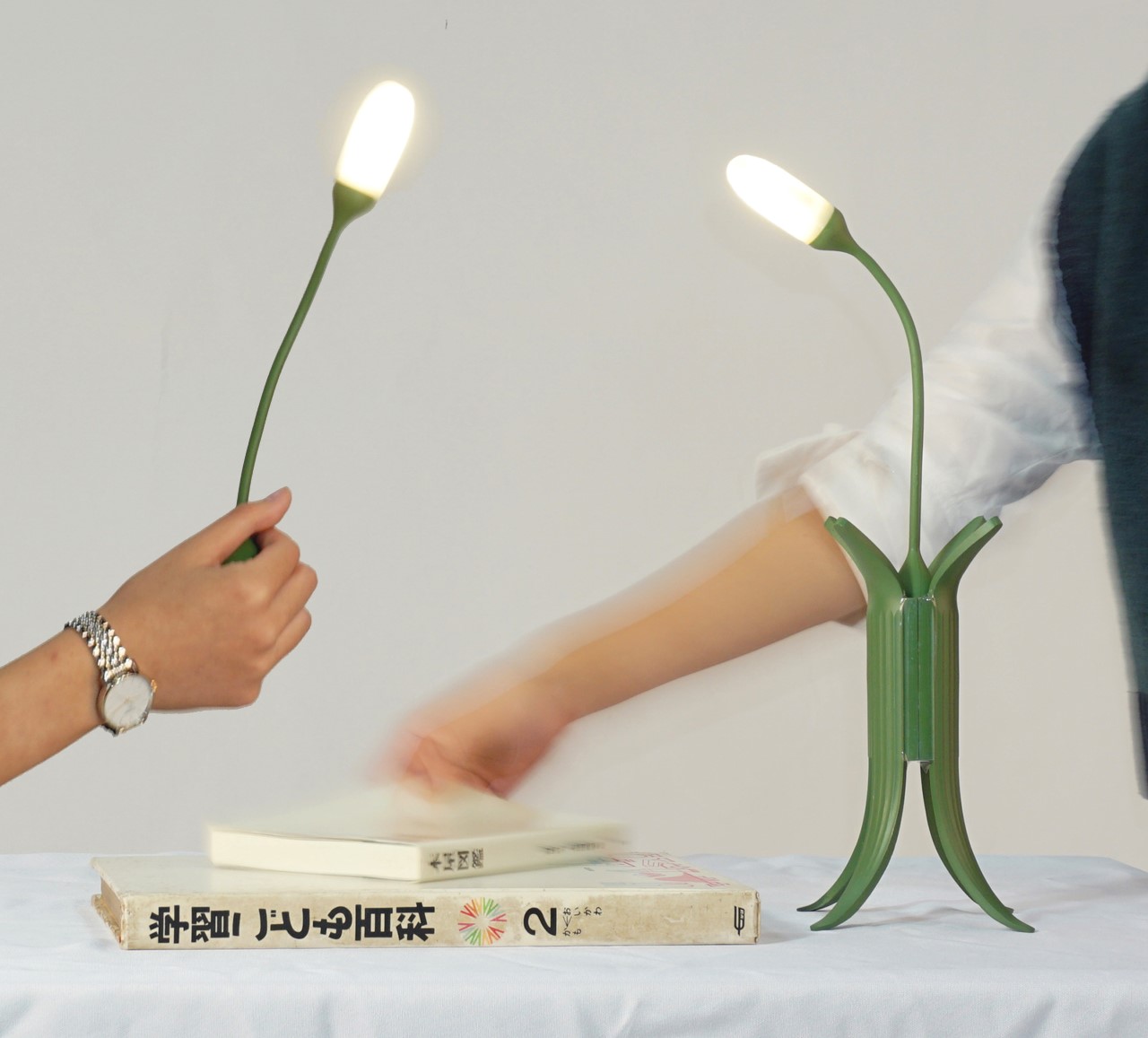 Designed to look like a fast-growing weed among a tuft of grass, the Weed Lamp by Jinying Cheng can actually be ‘uprooted’! The lamp itself comes with a detachable design that lets you lift the weed out of its grassy base and carry it around like a handheld torch. It’s perhaps the most quirky little lamps I’ve seen in a while with an unusual interaction, but I’m really taken by how fun it looks and feels! 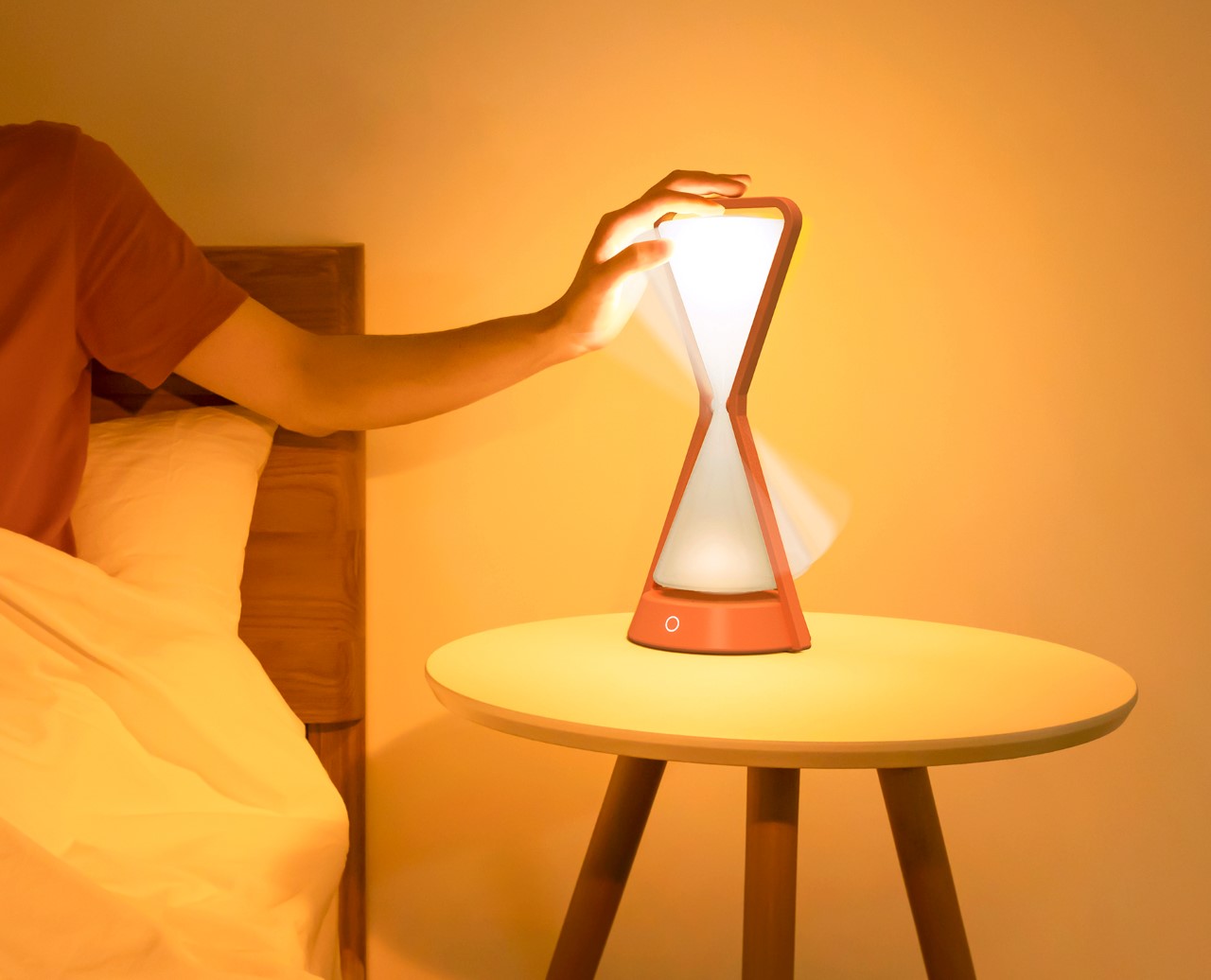 There’s something very intuitive and interactive about the way the Time Machine Table Lamp is designed. Made to look like an hourglass, the lamp features a freely rotating shade with a central pivot and LEDs on both ends. Switch the lamp on and the LEDs on the upper half of the hourglass illuminate. Over time, the upper half of the hourglass dims down and the lower half begins illuminating, almost as if light particles are passing through the central channel, like grains of sand would. The Time Machine Table Lamp was designed to help provide an ambient bedside aura of soft light, while allowing you to intuitively gauge time as it passes by. It takes around 60 minutes for the light to transfer from one half of the hourglass to the other, and a simple flip helps reset the entire procedure. It’s a fun-yet-useful way of timing your nightly activities before going to bed… perhaps reading a bedtime story, or sharing stories about your day before hitting the sack. 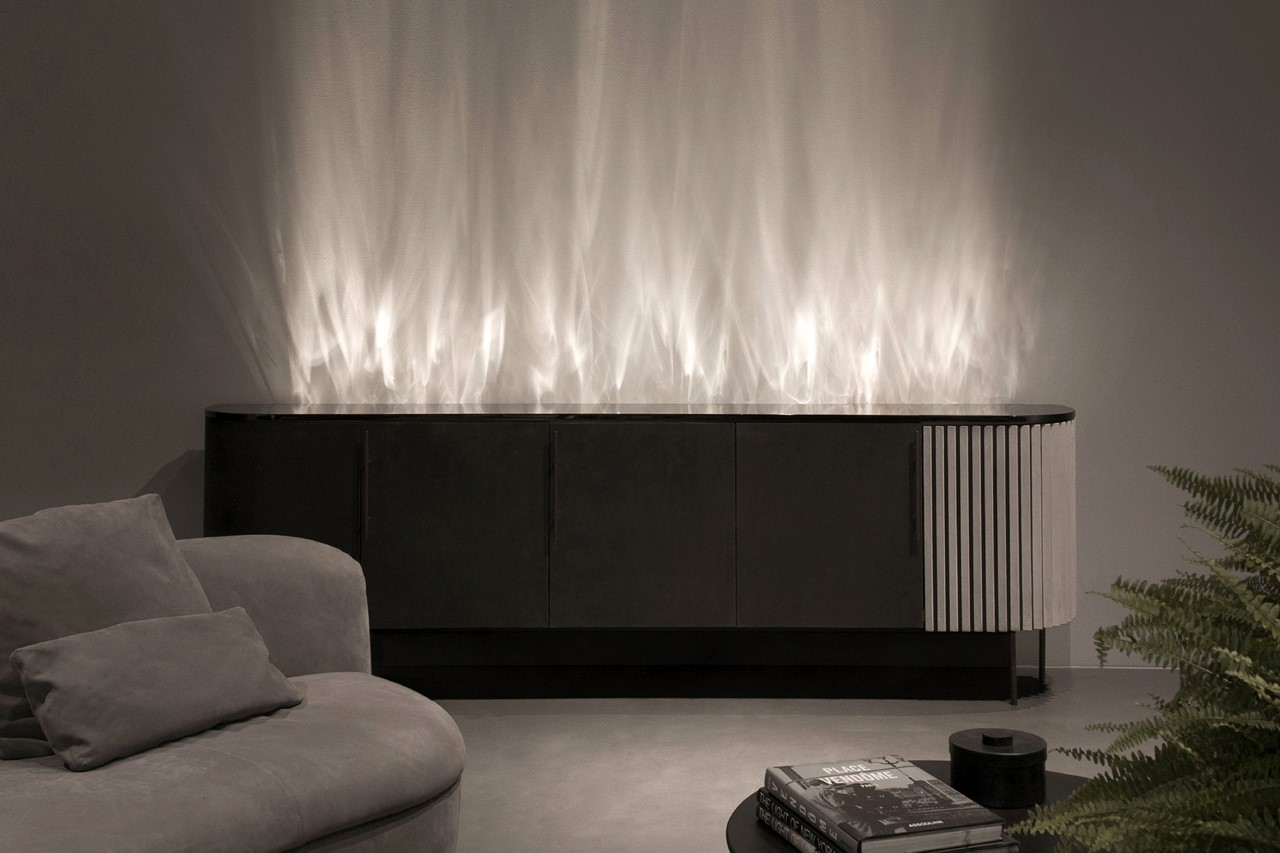 A winner of the coveted Platinum A’ Design Award, the Be Water lamp uses refraction to make light look like water! The lamp features a set of LEDs in a linear strip, right below a tube of warped glass. As the glass tube rotates, it creates wonderful patterns of light that when placed against or near a wall, mimic the effect of watching light bounce off a pool of water. The lamp exists in four chromatic variations – Be Water, Be Fire, Be Air, and Be Earth. The variations can be achieved simply by changing the color of the light to go from water to the tongues of fire, the Aurora Borealis visible in the air, and the billowing fields of purple lavender on Earth in Provence, France. I really wish there was a video of this lamp at work! 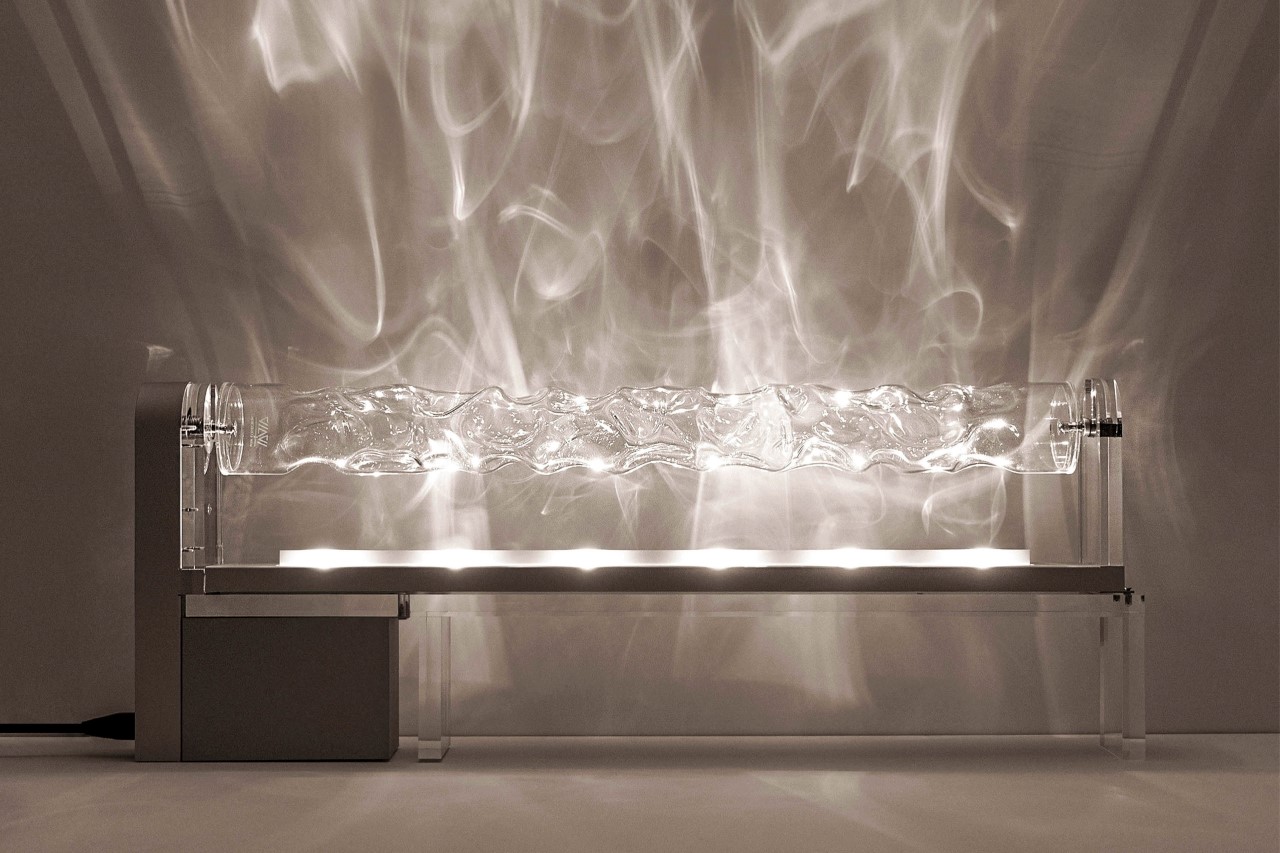 If you have a potential lighting design project that you think is worthy of an award, Click here to register & participate in the A’ Design Awards 2022.

My designer friends are going to appreciate the ‘0 Point Ruler’, one that gives you the flexibility to start point zero from wherever you like….

Inspired by nature and the dynamic possibilities of evolution, the Issit was design for airports and train stations. The chair(?) acts like a sculpture and…

https://www.youtube.com/watch?v=6ywLQqP5M1M If you’re ever wondering what sitting in an alien UFO feels like, I guess it pretty much feels like sitting on top of a…